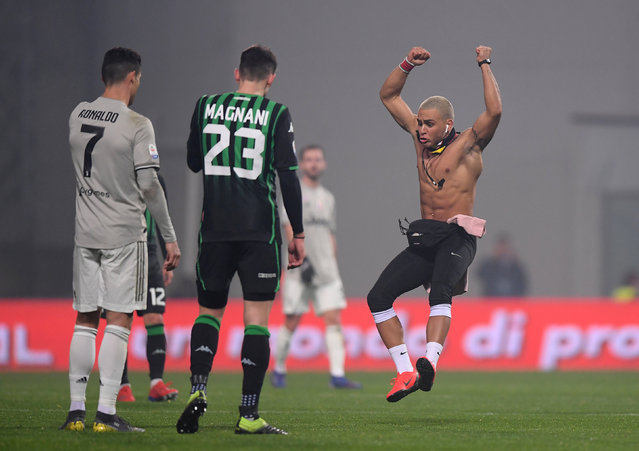 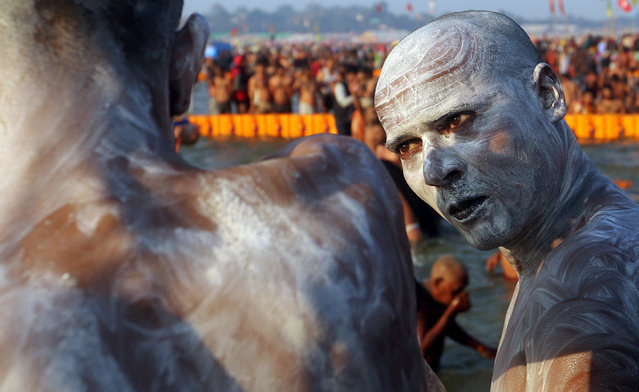 A Naga sadhu or a Hindu holy man stands after taking a dip during the third “Shahi Snan” (grand bath) at “Kumbh Mela” or the Pitcher Festival, in Prayagraj, previously known as Allahabad, India, February 10, 2019. (Photo by Jitendra Prakash/Reuters) 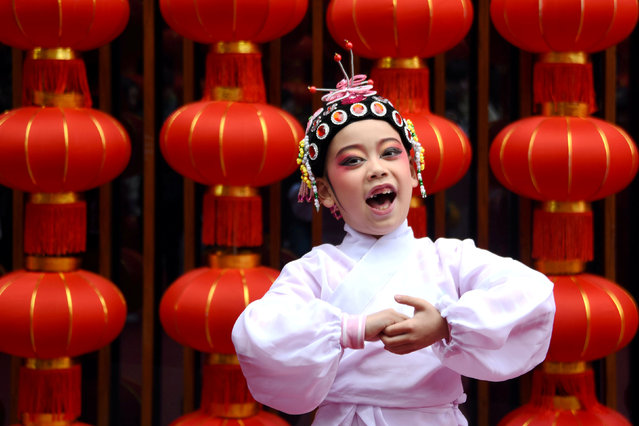 A child performs opera during celebrations on the eight day of Chinese Lunar New Year of the Pig, in Taizhou, Zhejiang province, China February 12, 2019. (Photo by Reuters/China Stringer Network) 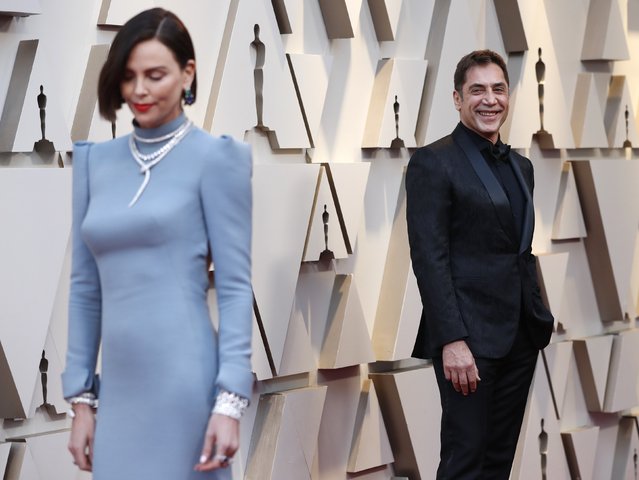 Charlize Theron and Javier Bardem arrive at the 91st Annual Academy Awards at Hollywood and Highland on February 24, 2019 in Hollywood, California. (Photo by Mario Anzuoni/Reuters) 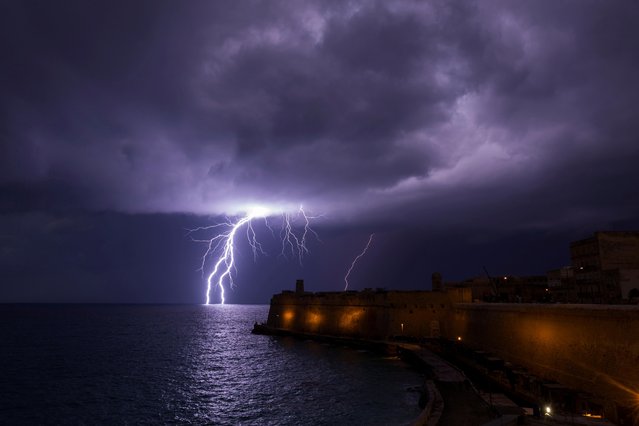 A lightning bolt strikes the sea near Fort St Elmo during a storm in Valletta, Malta on February 27, 2019. (Photo by Darrin Zammit Lupi/Reuters) 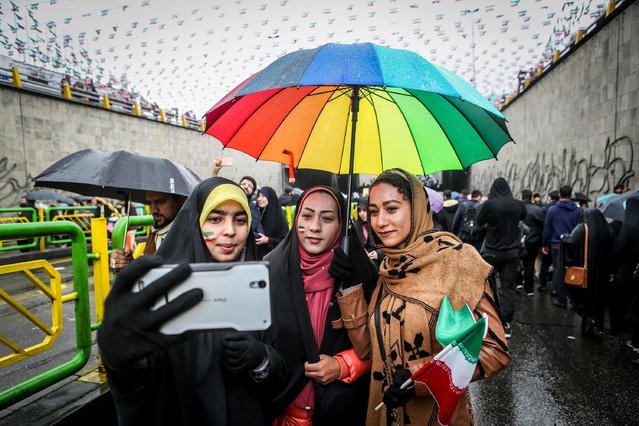 An Iranian woman takes selfies during a ceremony to mark the 40th anniversary of the Islamic Revolution in Tehran, Iran on February 11, 2019. (Photo by Vahid Ahmadi/Tasnim News Agency via Reuters) 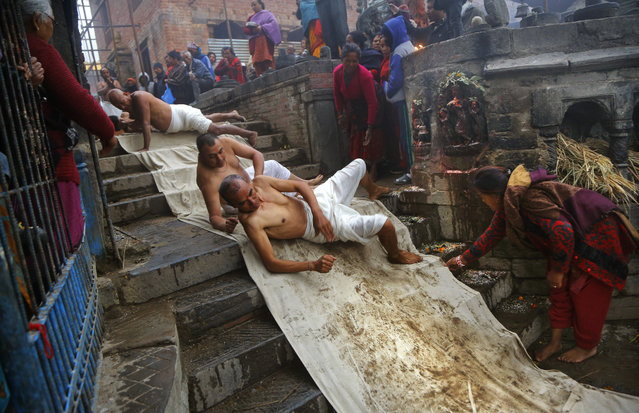 In this Thursday, January 24, 2019, file photo, Nepalese Hindu devotees roll on the ground as part of a ritual during the Madhav Narayan festival in Bhaktapur, Nepal. During this festival, devotees recite holy scriptures dedicated to Hindu goddess Swasthani and Lord Shiva. Unmarried women pray for a good husband while those married pray for the longevity of their husbands by observing a month-long fast. (Photo by Niranjan Shrestha/AP Photo) 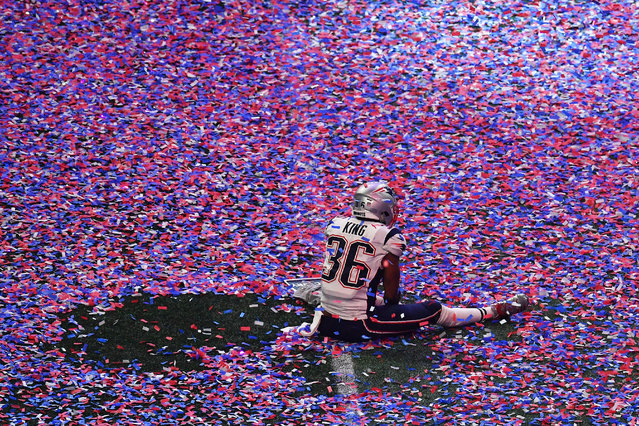 Brandon King of the New England Patriots sits in confetti on the pitch after winning Super Bowl LIII against the Los Angeles Rams at Mercedes-Benz Stadium in Atlanta, Georgia, on February 3, 2019. (Photo by Angela Weiss/AFP Photo) 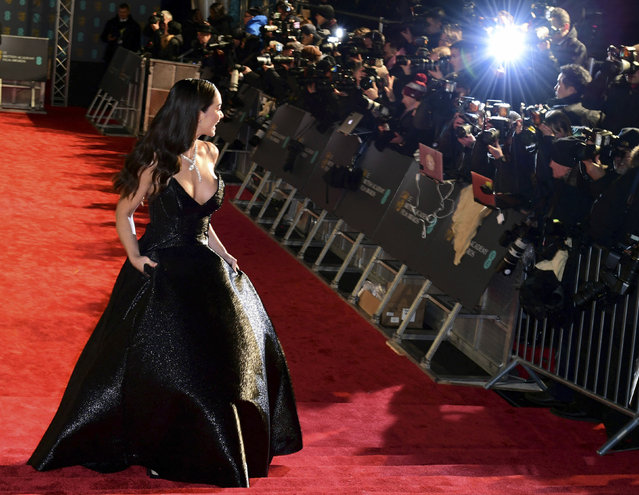 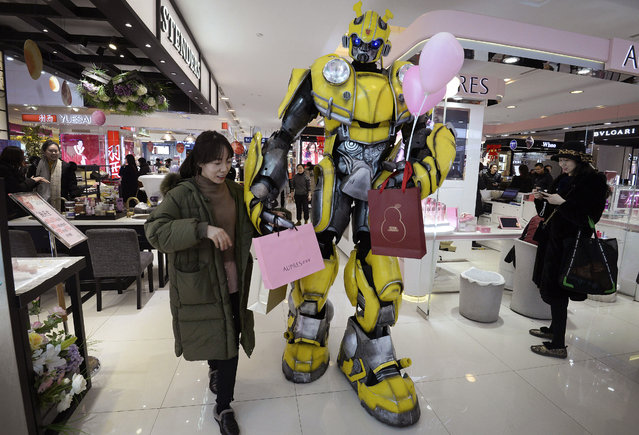 In this Thursday, February 14, 2019, photo, a Transformer's Bumblebee mascot helps a woman carries paper bags at a shopping mall in Handan in north China's Hebei province. U.S. and Chinese envoys are holding a second day of trade talks after the top economic adviser to President Donald Trump said he has yet to decide whether to go ahead with a March 2 tariff increase on imports from China. (Photo by Chinatopix via AP Photo) 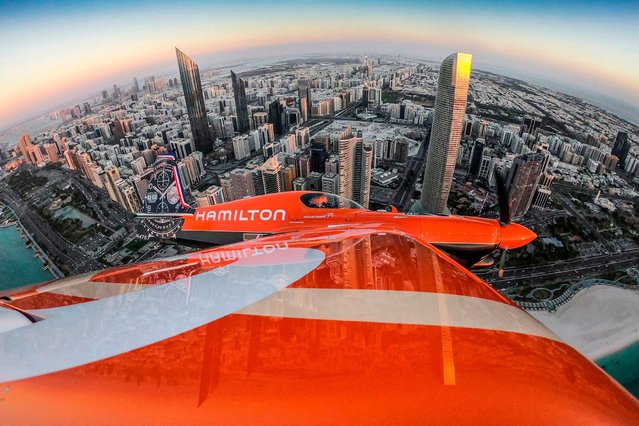 This handout photograph taken and released by Limex Images for Red Bull on February 6, 2019 shows France's Nicolas Ivanoff flying over the skyline prior to the first stage of the Red Bull Air Race World Championship in Abu Dhabi, United Arab Emirates. (Photo by Predrag Vuckovic/AFP Photo) 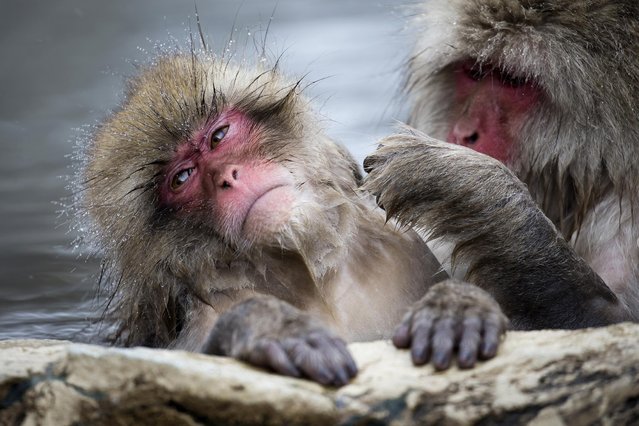 Macaque monkeys bathe in a hot spring at the Jigokudani Yaen-koen wild Macaque monkey park on February 8, 2019 in Yamanouchi, Japan. The wild Japanese macaques are known as snow monkeys, according to the park's official website. (Photo by Tomohiro Ohsumi/Getty Images) 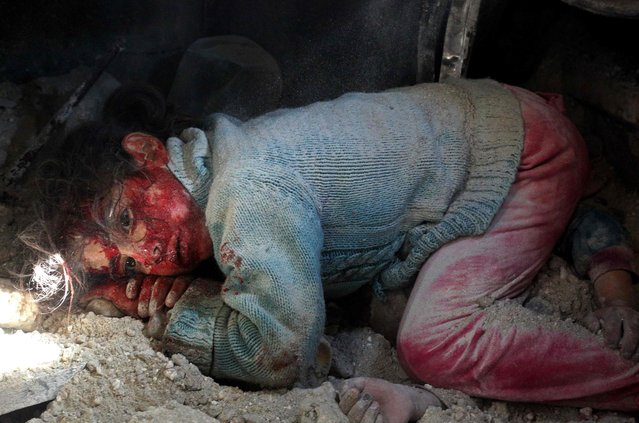 A wounded Syrian girl awaits rescue from under the rubble next to the body of her sister (hands seen-R) who did not survive regime bombardment in Khan Sheikhun in the southern countryside of the rebel-held Idlib province, on February 26, 2019. Regime bombardment near Khan Sheikhun, in Idlib province, killed two civilians on Tuesday, raising the civilian death toll to 42 since February 9, the Britain-based Syrian Observatory for Human Rights said. (Photo by Anas Al-Dyab/AFP Photo) 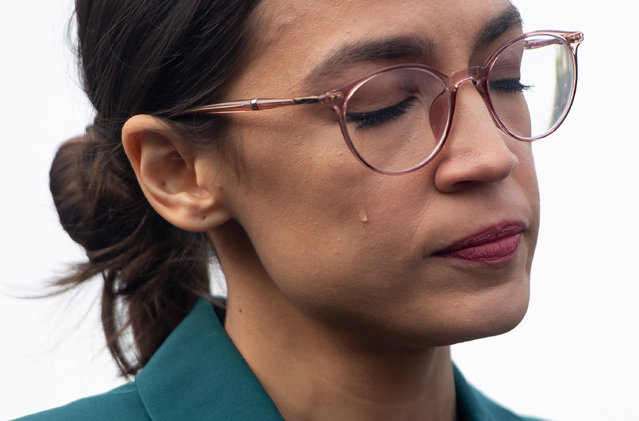 US Representative Alexandria Ocasio-Cortez, Democrat of New York, sheds a tear during a press conference calling on Congress to cut funding for US Immigration and Customs Enforcement (ICE) and to defund border detention facilities, outside the US Capitol in Washington, DC, February 7, 2019. (Photo by Saul Loeb/AFP Photo) 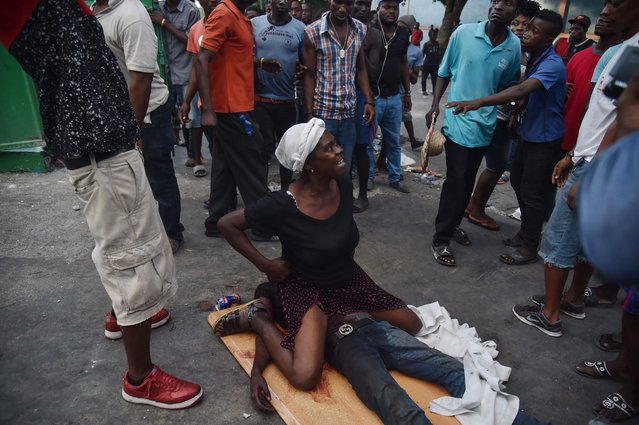 A mother in shock cries while sitting on the body of her dead son who was shot during clashes between Haitian police and demonstrators near to the National Palace in Port-au-Prince, on February 9, 2019. Demonstrators are demanding the resignation of Haitian President Jovenel Moise and protesting the Petrocaribe fund which for years Venezuela supplied Haiti and other Caribbean and Central American countries with oil at cut-rate prices and on easy credit terms. But investigations by the Haitian Senate in 2016 and 2017 concluded that nearly $2 billion from the program was misused. (Photo by Hector Retamal/AFP Photo) 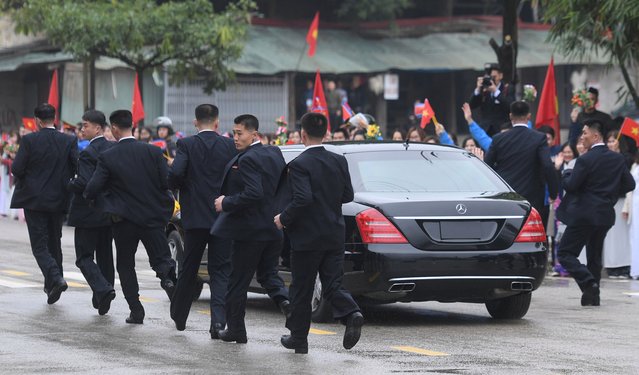 North Korean bodyguards run along a limousine transporting Kim Jong Un upon his arrival in Dong Dang, Vietnam, February 26, 2019. The second meeting of the US President and the North Korean leader, running from 27 to 28 February 2019, focuses on furthering steps towards achieving peace and complete denuclearization of the Korean peninsula. (Photo by Reuters/Stringer) 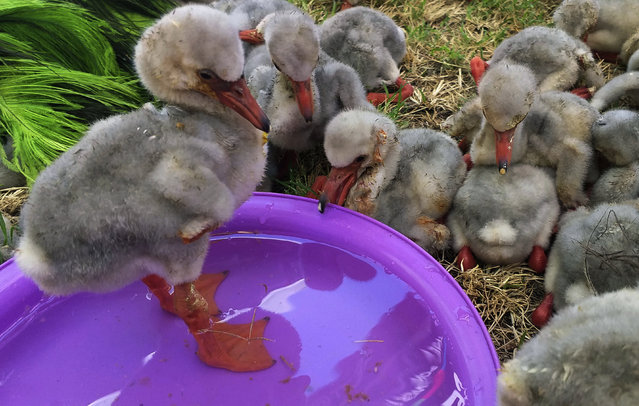 In this photo taken on Saturday, January 26, 2019 photo, rescued flamingo chicks have access to water at a centre after being rescued from a dried out dam in Kimberley, South Africa. A special airlift for thousands of baby flamingos is under way in South Africa as drought has put their breeding ground in peril. A reservoir that hosts one of southern Africa's largest flamingo populations is drying up. (Photo by AP Photo/Stringer) 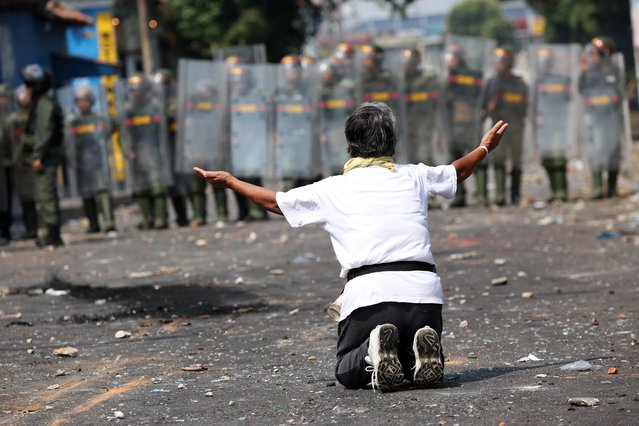 A demonstrator kneels down in front of security forces in Urena, Venezuela, February 23, 2019. (Photo by Andres Martinez Casares/Reuters) 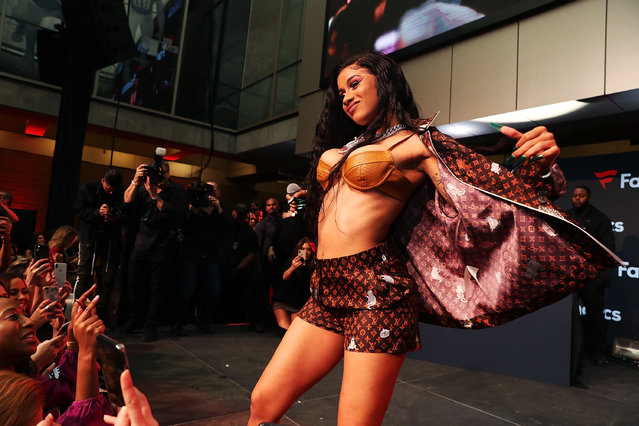