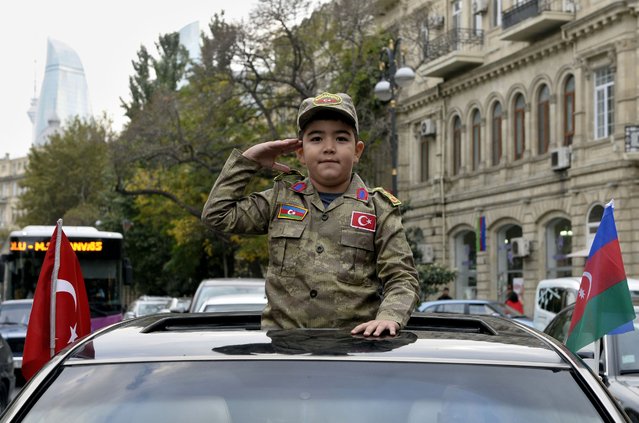 A boy wearing the Azerbaijan's military uniform salutes during celebrations in the streets of the capital Baku on November 10, 2020, after Armenia and Azerbaijan agreed a ceasefire following a string of Azeri victories in fighting over the disputed Nagorno-Karabakh region. Armenia and Azerbaijan agreed on a deal with Russia to end weeks of fierce clashes over Nagorno-Karabakh on November 10, 2020, after a string of Azerbaijani victories in its fight to retake the disputed region. (Photo by Tofik Babayev/AFP Photo) 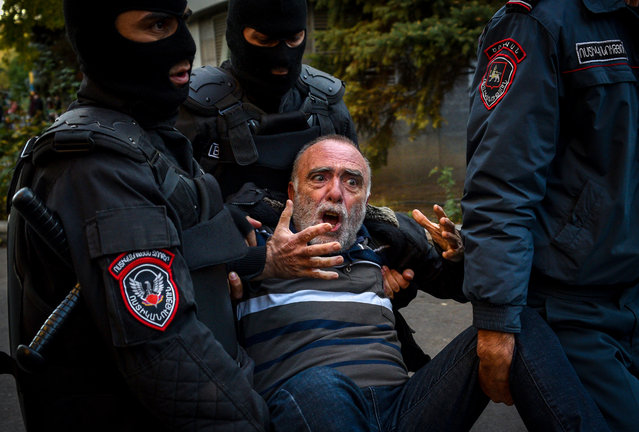 Armenian police officers detain a protestor during a rally against the country's agreement to end fighting with Azerbaijan over the disputed Nagorno-Karabakh region in Yerevan on November 12, 2020. Armenia on November 12, 2020 arrested 10 leading opposition figures for violently protesting against a Russian-brokered peace deal that ended weeks of fighting with Azerbaijan and sparked fury with Prime Minister Nikol Pashinyan. (Photo by Karen Minasyan/AFP Photo) 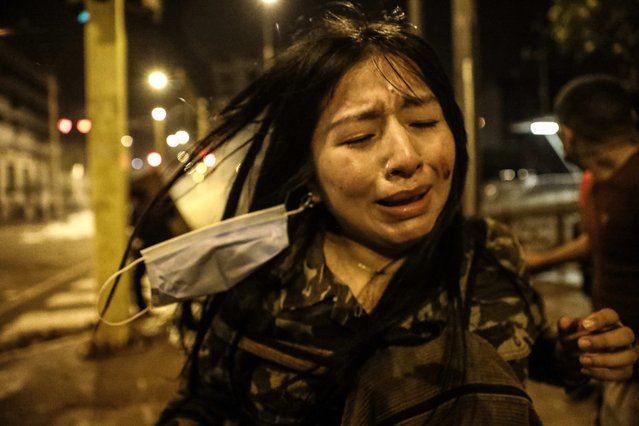 An injured person reacts during a protest against the new government of President Manuel Merino, in San Martin de Lima square, in Lima, Peru, 14 November 2020. Merino took office on 10 November amid a controversial constitutional process after the dismissal of former President Martin Vizcarra for “moral incapacity” by Peruvian Congress. (Photo by Aldair Mejia/EPA/EFE) 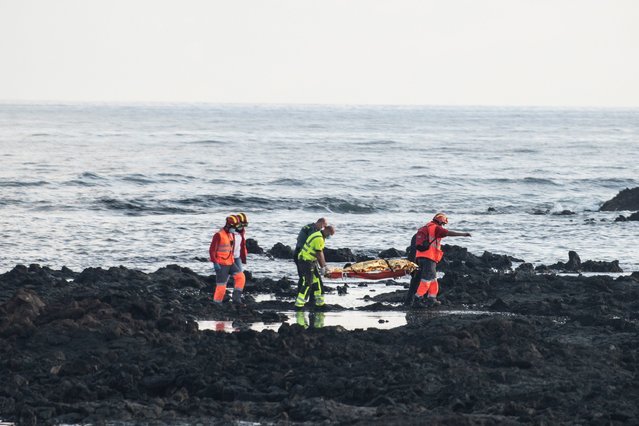 Members of the emergency services transfer a body as they continue the search of missing migrants after 27 migrants were rescued after their small fishing boat sank off the coast in Lanzarote, Canary Islands, Spain, 25 November 2020. A total of 27 people have been rescued alive while eight bodies have been found from the group of 37 migrants that are believed were traveling on board the fishing boat. Rescue services continue searching the area. (Photo by Javier Fuentes Figueroa/EPA/EFE) 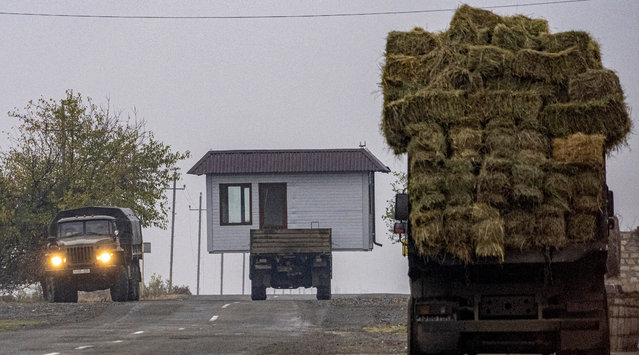 A truck carries a barn as Armenian refugees leave the village of Nor Maragha near Agdam on November 18, 2020. As part of the deal, Armenia and Nagorno-Karabakh must return the Aghdam, Kalbajar and Lachin districts to Azerbaijan starting on November 20, with a completion deadline of December 1. (Photo by Andrey Borodulin/AFP Photo) 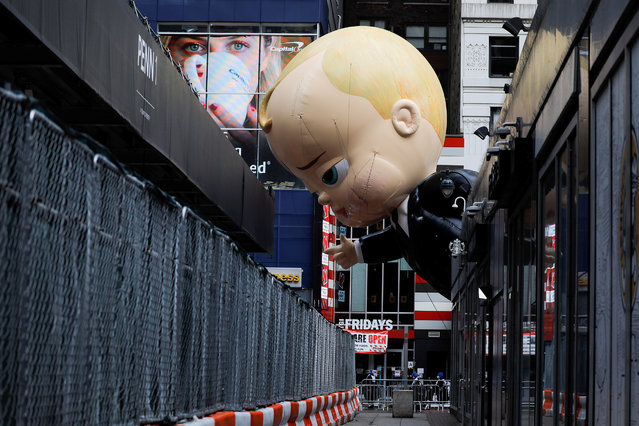 The “The Boss Baby” balloon is seen during the 94th Macy's Thanksgiving Day Parade closed to the spectators due to the spread of the coronavirus disease (COVID-19), in Manhattan, New York City, U.S., November 26, 2020. (Photo by Andrew Kelly/Reuters) 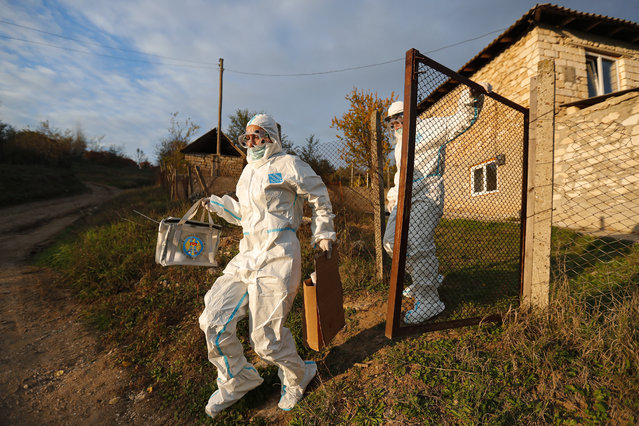 Election officials wearing biohazard suits, for protection against the COVID-19 infection, carry a mobile ballot box while visiting voters with mobility issues during the presidential elections in Hrusova, Moldova, Sunday, November 15, 2020. Moldovans returned to the polls Sunday for the second round of voting in the country's presidential election, facing a choice between the staunchly pro-Russian incumbent and his popular pro-Western challenger after former prime minister, Maia Sandu, who beat the odds to win the first round on November 1 with over 36 percent of to vote, leaving the incumbent, President Igor Dodon, trailing her by over 3.5 points. (Photo by Roveliu Buga/AP Photo) 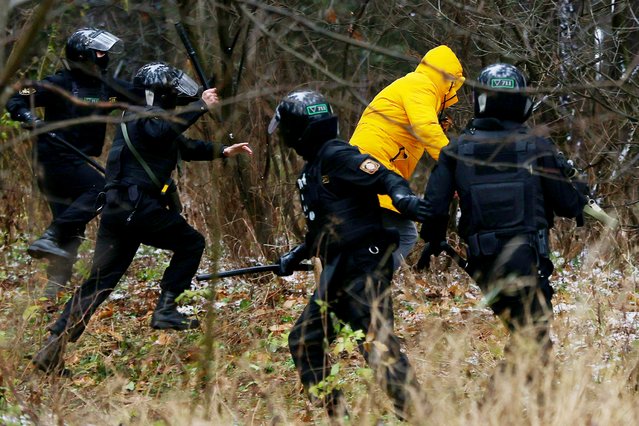 Riot police detain an opposition supporter during a rally in central Minsk, Belarus on November 22, 2020. Mass protests organised by the opposition have been taking place in Belarus after the 9 August presidential election. (Photo by Stringer/TASS) 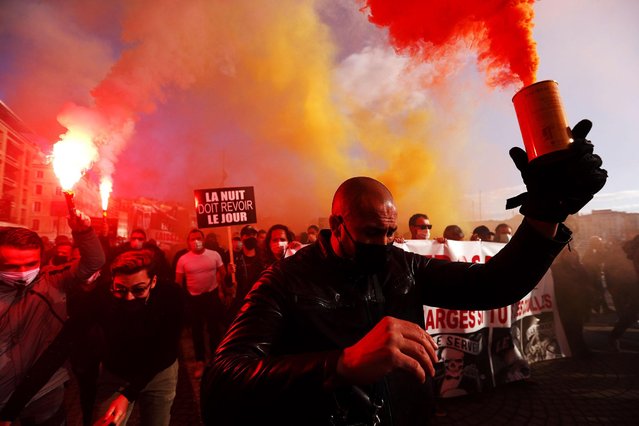 A protester lights a smoke grenade as he participates in a demonstration of restaurant/bar owners and workers from various economic sectors to protest against the closing of “non-essential” business in Marseille, France, 26 November 2020. French President Emmanuel Macron announced on 24 November 2020 that restaurants and bars are to reopen on 20 January 2021 if the health situation allows it. (Photo by Guillaume Horcajuelo/EPA/EFE) 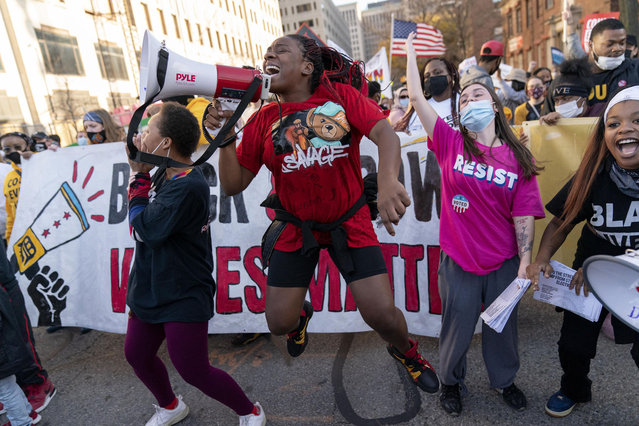 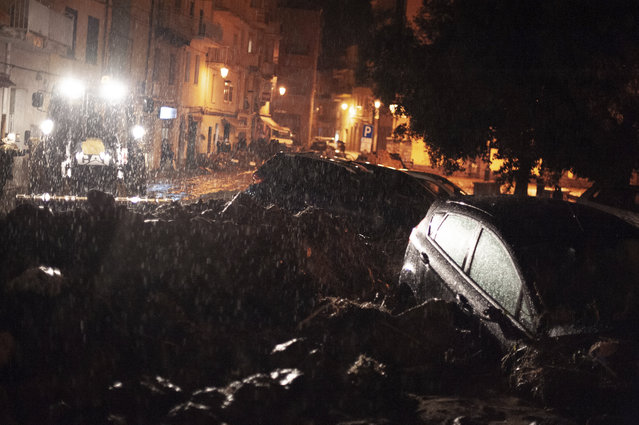 Cars among other debris litter the street in Bitti, Sardinia, Italy, Saturday, November 28, 2020. The town of Bitti in Sardinia was hit by a storm and flooded by a massive mudslide that killed at least 2 people on Saturday. (Photo by Alessandro Tocco/LaPresse via AP Photo) 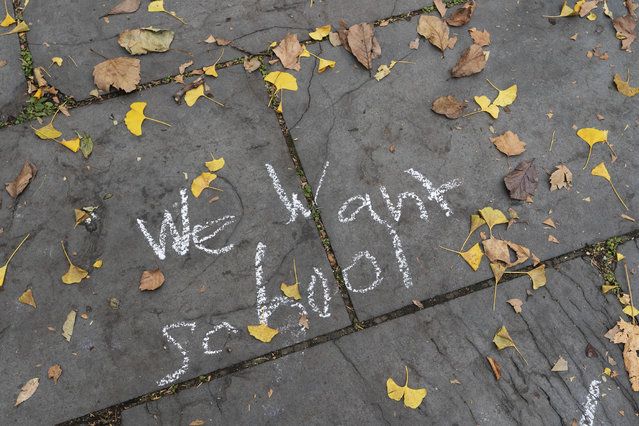 A student's graffiti is written on a sidewalk in front of New York's City Hall during a protest by parents and students opposing the closing of schools, Thursday, November 19, 2020. Mayor Bill de Blasio announced Wednesday that the nation's largest school system will move to remote learning only as the city tries to tamp down a growing number of coronavirus cases. (Photo by Mark Lennihan/AP Photo) 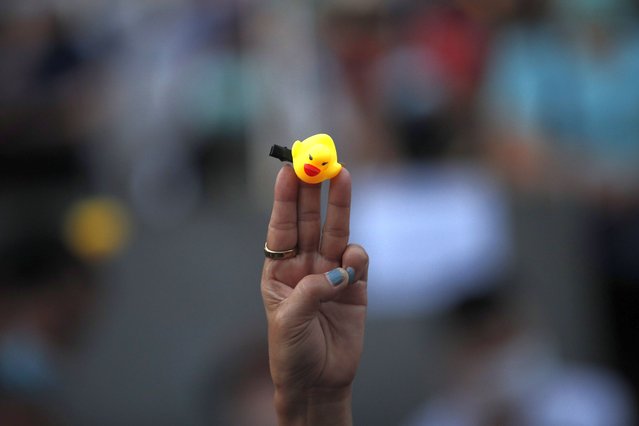 A Thai anti-government protester flashes a three-finger salute with a rubber-duck during a street protest calling for political and monarchical reform in Bangkok, Thailand, 28 November 2020. Thailand has been facing political turmoil amid months-long street protests calling for the political and monarchical reform and the resignation of the prime minister Prayuth Chan-ocha. (Photo by Rungroj Yongrit/EPA/EFE) 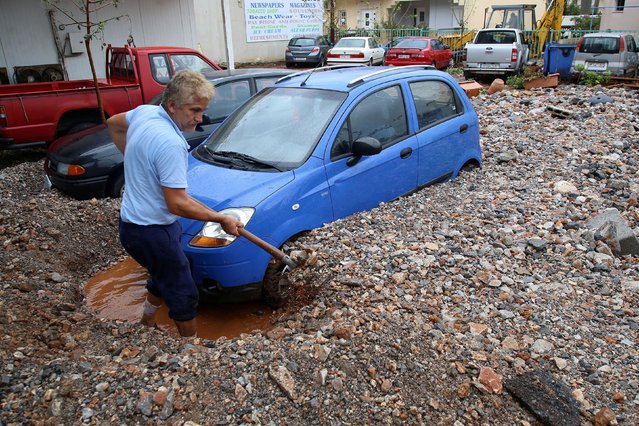 A local shovels mud blocking a car, following heavy rainfall in Malia on the island of Crete, Greece, November 10, 2020. (Photo by Stefanos Rapanis/Reuters) 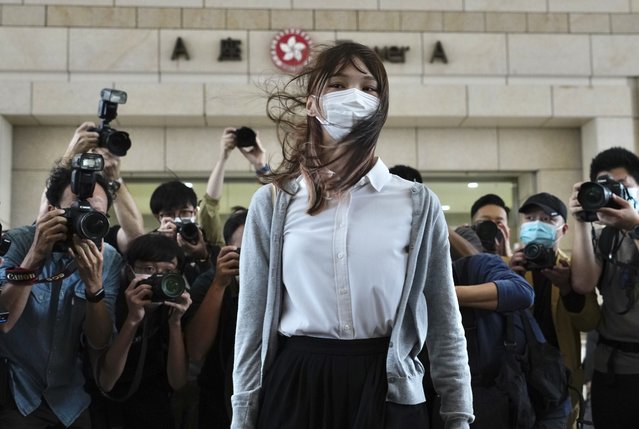 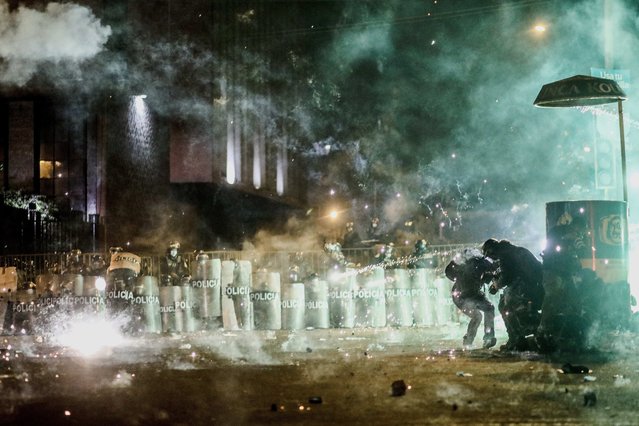 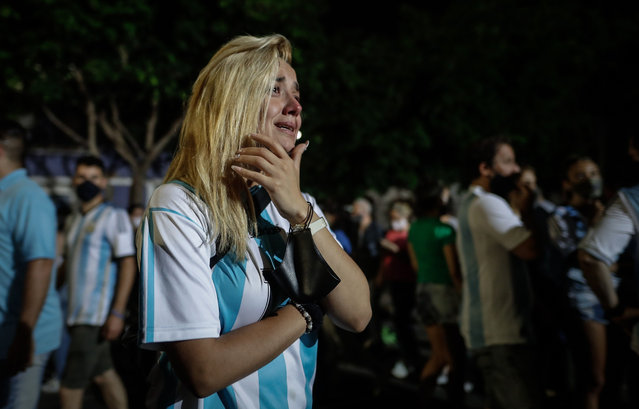 Fans gather to honor Diego Armando Maradona at the Club Argentinos Juniors Stadium, in Buenos Aires, Argentina, 25 November 2020. An applause throughout the country, which included honks and shouts of thanks, marked an emotional farewell from the Argentine people to the former world soccer star, Diego Armando Maradona, who passed away this morning at age 60. (Photo by Juan Ignacio Roncoroni/EPA/EFE) 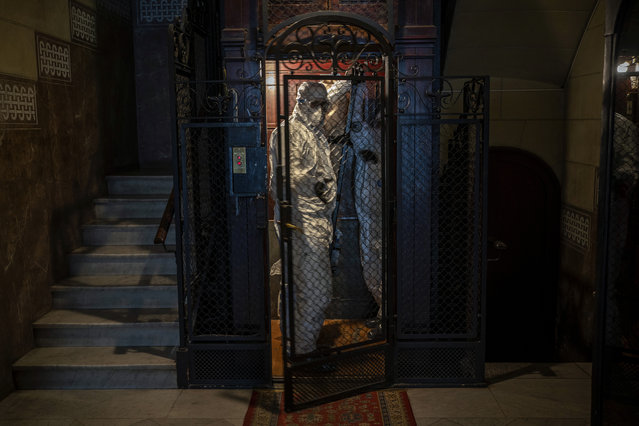 Wearing protective suits to prevent infection, mortuary workers move the body of an elderly person who died of COVID-19 from an elevator after removing it from a nursing home in Barcelona, Spain, Friday, November 13, 2020. (Photo by Emilio Morenatti/AP Photo) 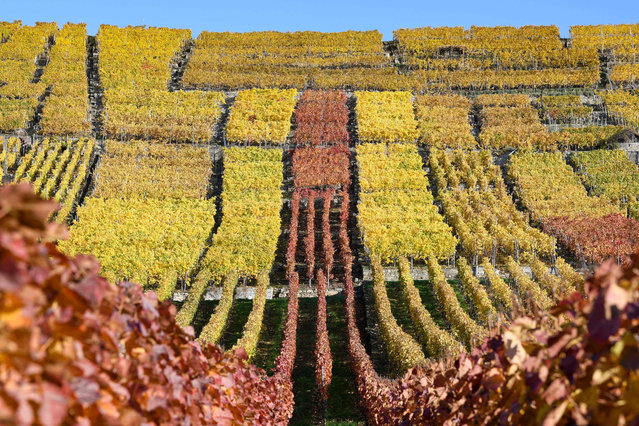 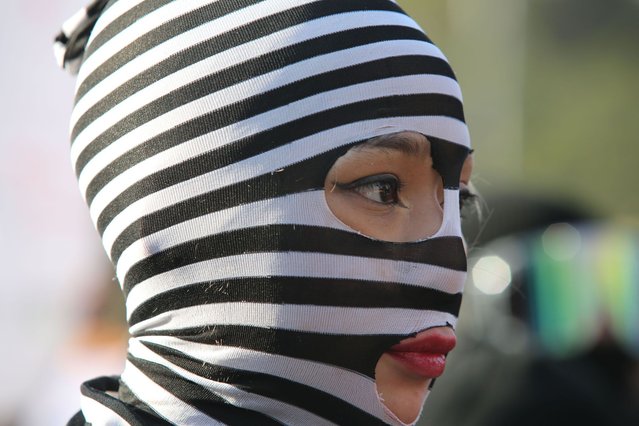