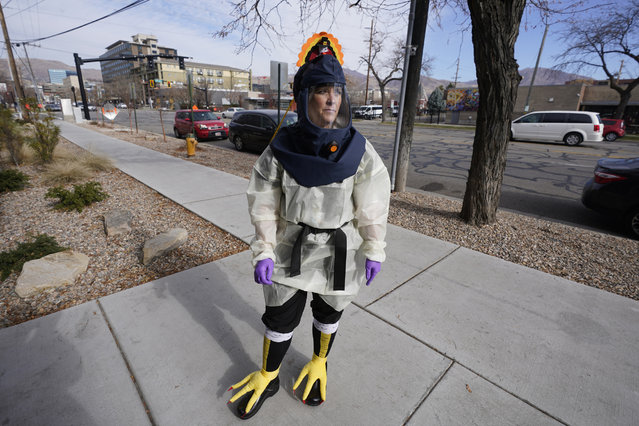 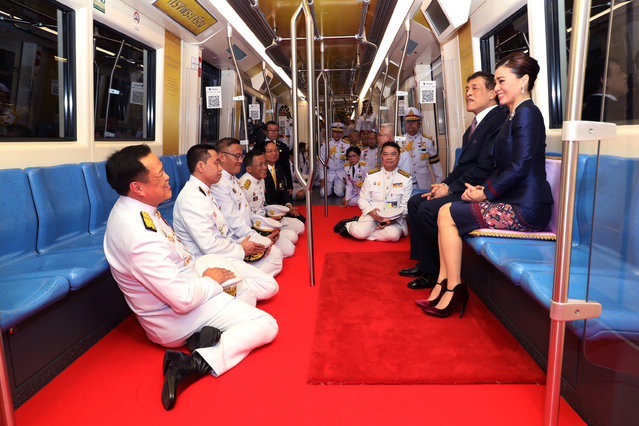 This photo taken on November 14, 2020 shows Thailand's King Maha Vajiralongkorn and Queen Suthida riding with officials on an MRT commuter train during the inauguration of a new subway station in Bangkok. (Photo by Royal Household Bureau/Reuters) 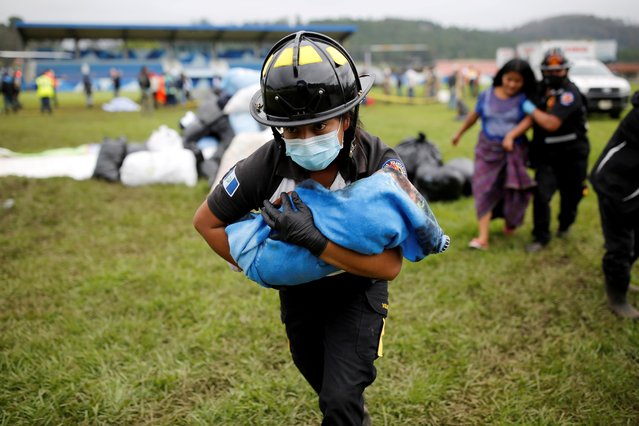 A firefighter carries a baby rescued along with her mother from an area affected by mudslides caused by Storm Eta, in San Cristobal Verapaz, Guatemala on November 7, 2020. (Photo by Luis Echeverria/Reuters) 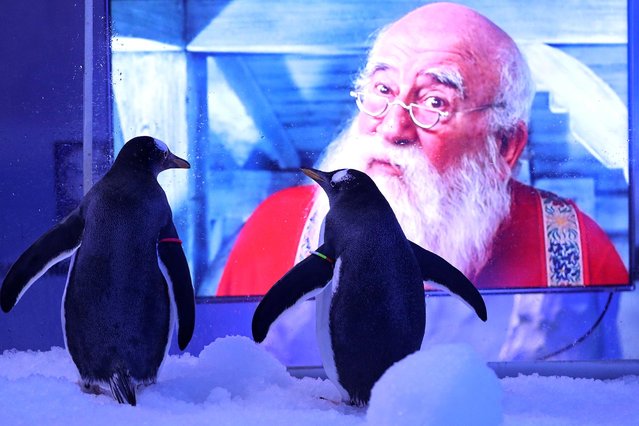 The Sea Life centre in London keeps residents entertained and stimulated on November 30, 2020, so they can handle the return of visitors. (Photo by Yui Mok/PA Images via Getty Images) 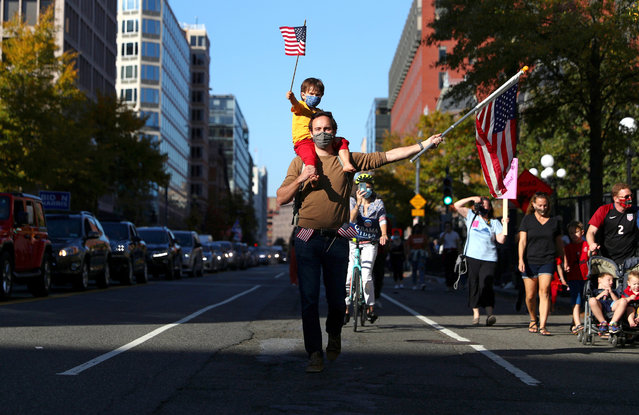 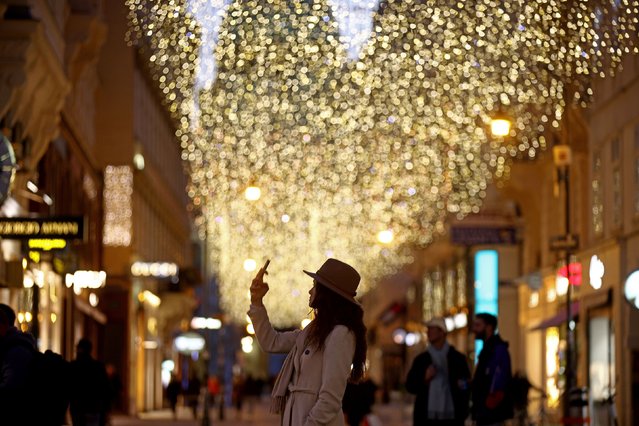 A woman takes a picture of Christmas lights at Kohlmarkt shopping street during second lockdown as the spread of the coronavirus disease (COVID-19) continues, in Vienna, Austria on November 17, 2020. (Photo by Lisi Niesner/Reuters) 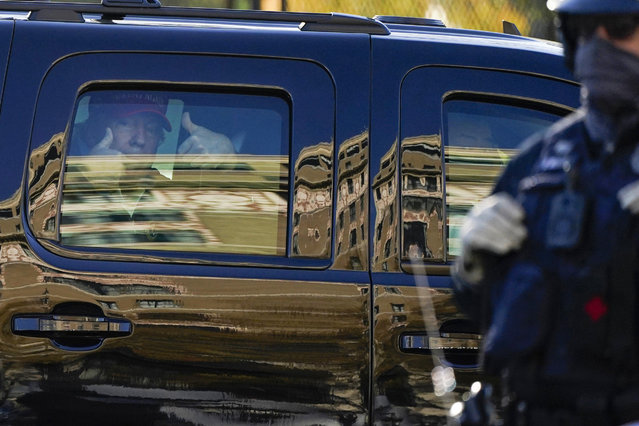 President Donald Trump gives two thumbs up to supporters from his motorcade as people gather for a march Saturday, November 14, 2020, in Washington. (Photo by Julio Cortez/AP Photo) 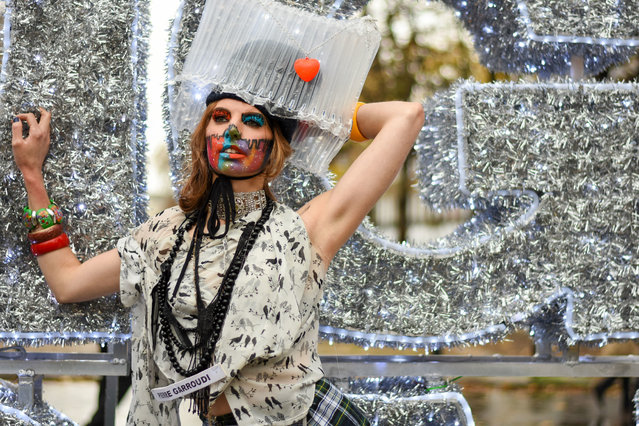 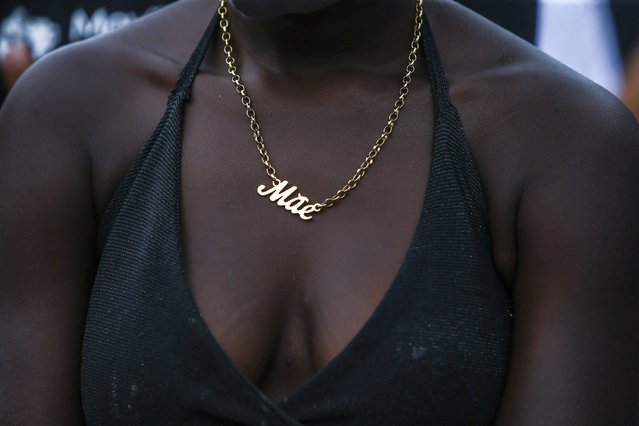 A woman wearing a necklace with the word "Mother" in Portuguese, protests against the killing of Emily Victoria Silva dos Santos, 4, and Rebeca Beatriz Rodrigues dos Santos, 7, in Duque de Caxias, Rio de Janeiro state, Brazil, Sunday, December 6, 2020. The girls, cousins, were killed by stray bullets while playing outside their homes. (Photo by Bruna Prado/AP Photo) 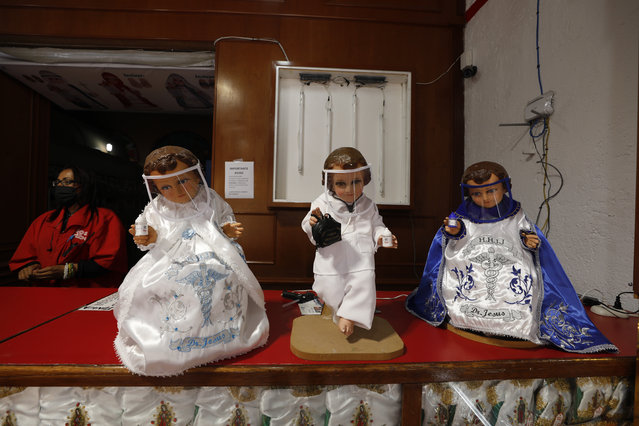 Figurines of the Baby Jesus, one dressed as a COVID-19 doctor, are displayed in store specializing in Baby Jesus outfits and accessories and face shields, in Mexico City, Friday, December 4, 2020. Amid a surge in COVID-19 cases and hospitalizations, Mexico's capital is once again calling on people to stay at home as much as possible. (Photo by Rebecca Blackwell/AP Photo) 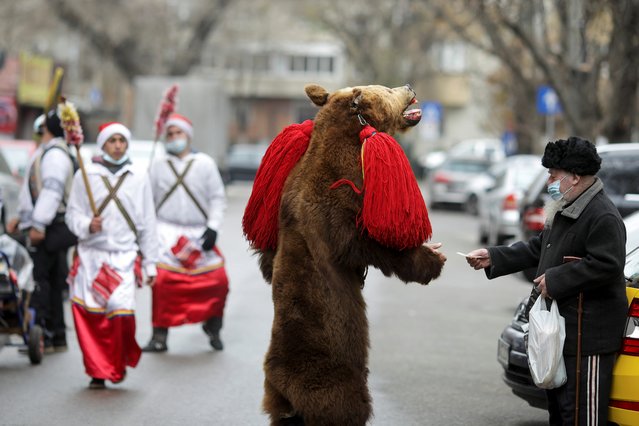 A street performer dressed as a bear collects donations from passersby in central Bucharest, Romania on December 2, 2020. (Photo by Octav Ganea/Reuters) 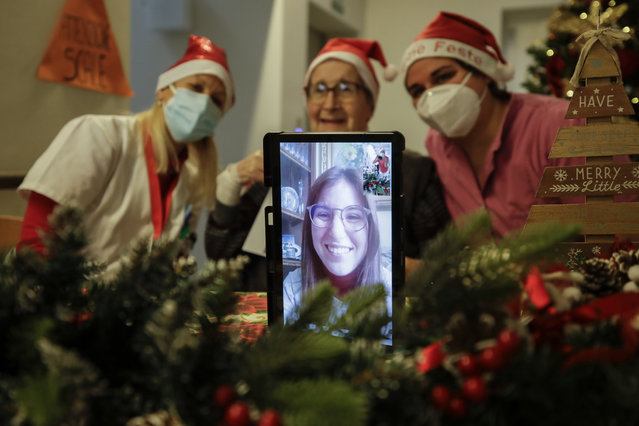 Carolina Previtali, 93, center, is flanked by director Maria Giulia Madaschi, left, and carer Melania Cavalieri as she talks on a video call with Eleonora Nola, a donor unrelated to her, who bought and sent her a Christmas present through an organization dubbed “Santa's Grandchildren”, at the Martino Zanchi nursing home in Alzano Lombardo, one of the area that most suffered the first wave of COVID-19, in northern Italy, Saturday, December 19, 2020. (Photo by Luca Bruno/AP Photo) 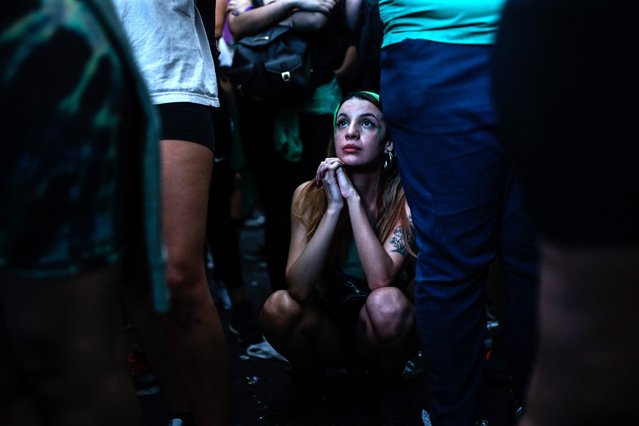 Women await the approval of the new abortion law as they hold a vigil in front of the Congress, in Buenos Aires, Argentina, 11 December 2020. The new abortion bill would allow to get an abortion until the 14th week of pregnancy. (Photo by Juan Ignacio Roncoroni/EPA/EFE) 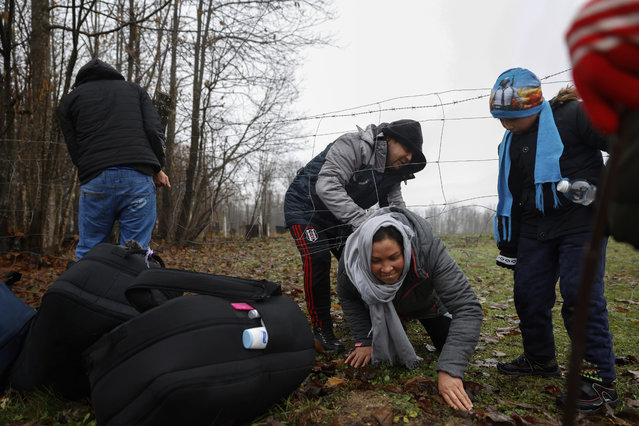 Malika from Afghanistan is helped by her husband Ahmed to crawl under a fence a few kilometers from the Bosnia-Croatia border near Velika Kladusa in Bosnia Wednesday December 9, 2020. Entire migrant families are on the move in cold weather in Bosnia while trying to reach the West as the European Union warns the Balkan country it must act to prevent a humanitarian disaster. A statement by the EU Bosnia mission says current weather conditions are putting at risk the lives of more than 3,000 people sleeping rough or staying in inadequate conditions. (Photo by Marc Sanye/AP Photo) 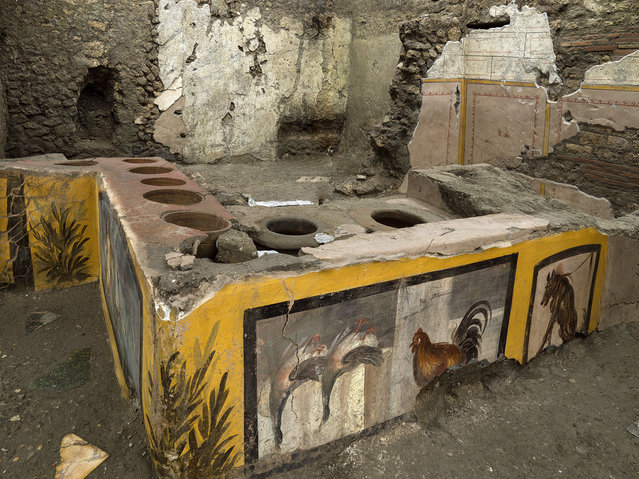 An undated photo made available by the Pompeii Archeological park press office shows the thermopolium in the Pompeii archeological park, near Naples, Italy. A fast-food eatery discovered at Pompeii is now completely excavated, helping to reveal some favorite dishes of citizens of the ancient Roman city who liked to eat out. Pompeii Archaeological Park’s longtime chief, Massimo Osanna said Saturday, December 26, 2020, in a statement that while some 80 such fast-foods have been found at Pompeii, it is the first time such an eatery — known as a thermopolium since it serve hot foods — had been entirely excavated. (Photo by Luigi Spina/Parco Archeologico di Pompei via AP Photo) 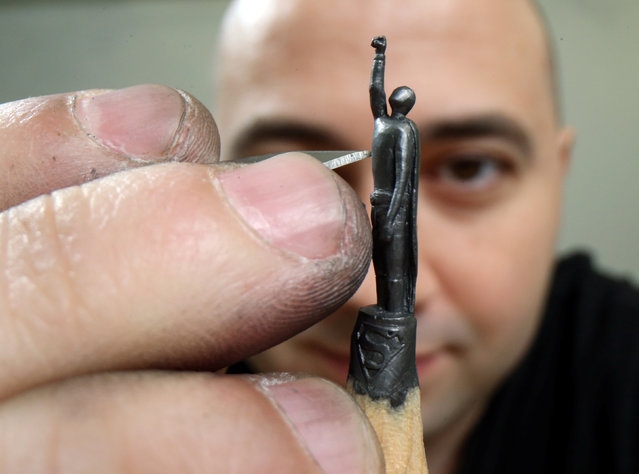 Jasenko Djordjevic works on his miniature sculpture on a graphite pencil in Tuzla, Bosnia and Herzegovina on December 10, 2020. Jasenko, a self-taught artist, crafts tiny sculptures on pencil graphite, using nothing but hand precision and a sharp knife. (Photo by Dado Ruvic/Reuters) 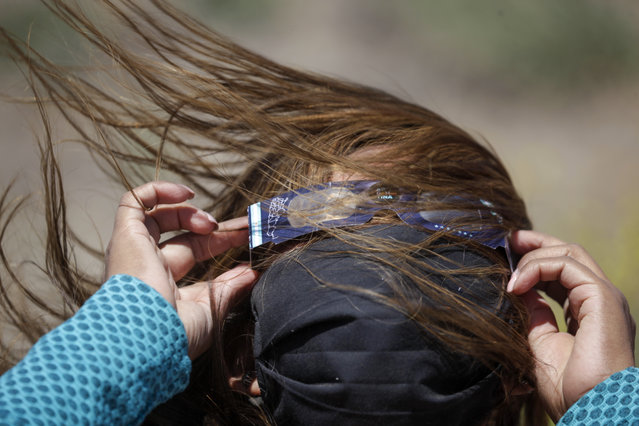 A woman wears special glasses to watch a total solar eclipse in Piedra del Aguila, Argentina, Monday, December 14, 2020. The total solar eclipse was visible from the northern Patagonia region of Argentina and from Araucania in Chile. (Photo by Natacha Pisarenko/AP Photo) 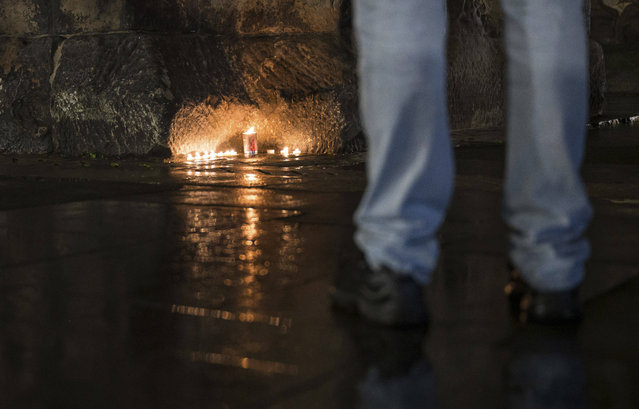 People lit candles at the historic Porta Nigra gate near the scene of an incident in Trier, Germany, Tuesday, December 1, 2020. German police say people have been killed and several others injured in the southwestern German city of Trier when a car drove into a pedestrian zone. Trier police tweeted that the driver had been arrested and the vehicle impounded. (Photo by Oliver Dietze/dpa via AP Photo) 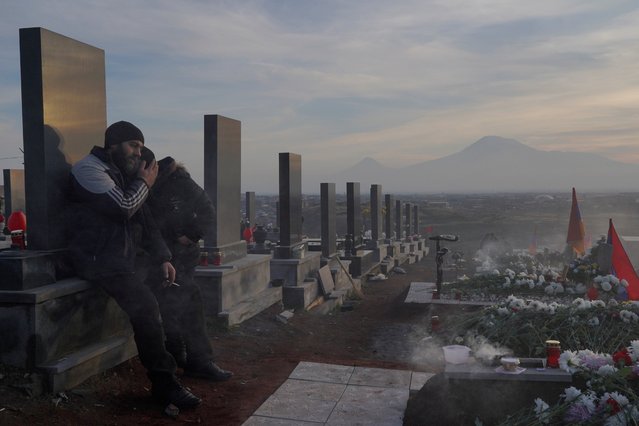 People gather at Yerablur Military Pantheon cemetery on the day of the Armenian nationwide mourning for those killed in a conflict over the region of Nagorno-Karabakh in Yerevan, Armenia on December 19, 2020. (Photo by Artem Mikryukov/Reuters) 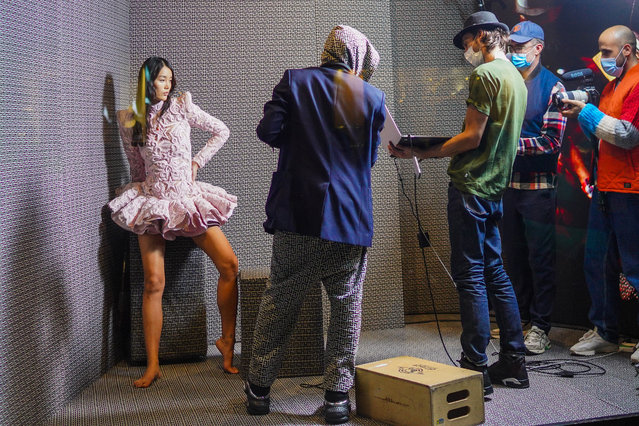