A pedestrian walks past an important stack of rubbish in the second district of Marseille, southern France, on December 28, 2020 as the company Polyceo, in charge of trash collection, is on strike since December 17, 2020. For nearly a week, some 200 employees of the company Polyceo, responsible for garbage collection and cleanliness in the 2nd, 15th and 16th arrondissements of Marseille have been on strike. More than 550 tonnes of waste were not collected in these areas, according to the Aix-Marseille-Provence Metropolis. (Photo by Nicolas Tucat/AFP Photo) 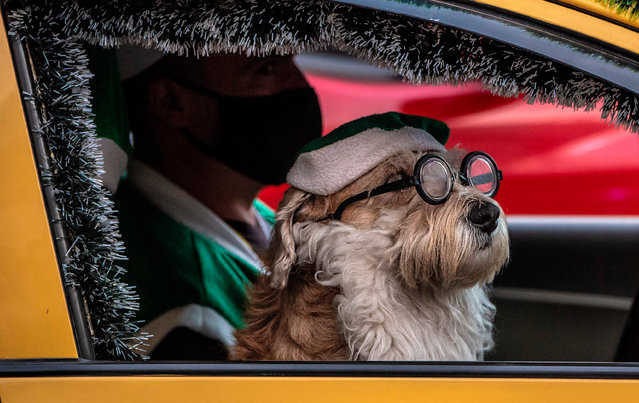 A taxi driver drives next to his dog fancy dressed as Santa Claus in Bogota on December 29, 2020. (Photo by Juan Barreto/AFP Photo) 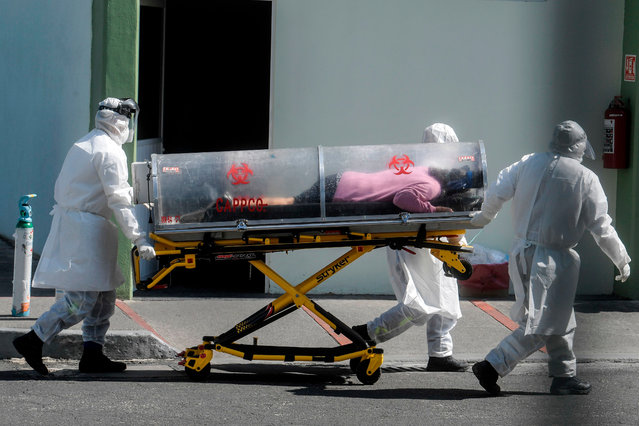 Paramedics move a patient suspected of being infected with the novel coronavirus into the 22 Battalion of the Military Police Hospital, in Mexico City, on December 30, 2020. Mexico has registered more than 124,000 coronavirus deaths – the world's fourth-highest toll after the United States, Brazil and India. (Photo by Pedro Pardo/AFP Photo) 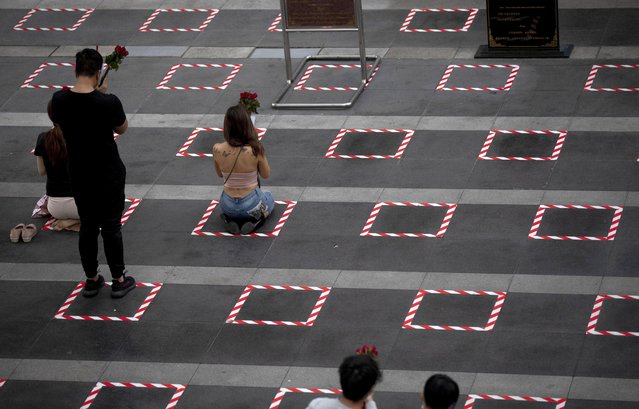 Devotees pray as they stay inside marked areas for social distancing at a shrine for Hindu god Ganesh, outside a shopping mall in Bangkok, Thailand, Tuesday, December 29, 2020. Thailand reported more than 155 new coronavirus infections and its first fatality since November on Tuesday as the virus spread from two recently identified clusters to other parts of the country. (Photo by Gemunu Amarasinghe/AP Photo)

A burger covered with gold foil is seen inside the Toro McCoy restaurant, in Bogota, Colombia on December 18, 2020. (Photo by Luisa Gonzalez/Reuters)

A colleague wears a Christmas hat as European Union chief negotiator Michel Barnier, center, carries a binder of the Brexit trade deal during a special meeting of Coreper, at the European Council building in Brussels, Friday, December 25, 2020. European Union ambassadors convened on Christmas Day to start an assessment of the massive free-trade deal the EU struck with Britain. After the deal was announced on Thursday, EU nations already showed support for the outcome and it was expected that they would unanimously back the agreement, a prerequisite for its legal approval. (Photo by Olivier Hoslet, Pool via AP Photo) 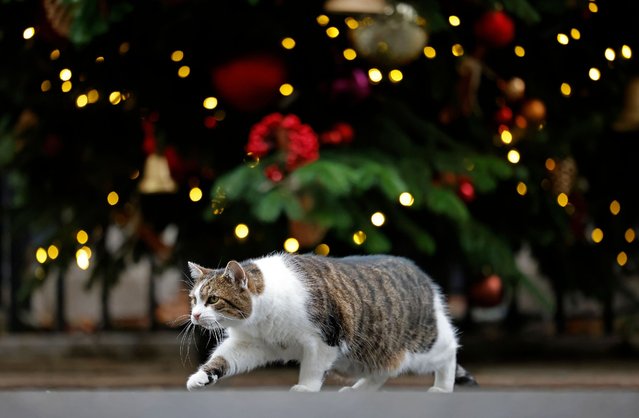 Larry the 10 Downing Street cat stalks a pigeon near the Christmas tree in Downing Street in central London on December 9, 2020. British Prime Minister Boris Johnson and European Commission president Ursula von der Leyen are to meet in Brussels on Wednesday to try to break the deadlock in Brexit trade talks. (Photo by Tolga Akmen/AFP Photo) 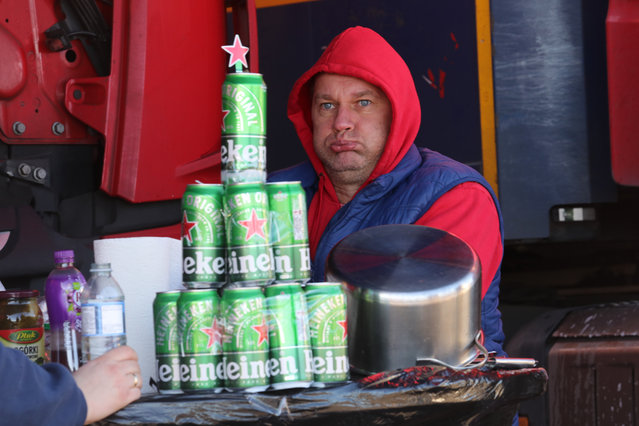 A Polish lorry driver, who has fashioned a makeshift Christmas tree out of empty Heineken cans, waits at a truck stop near Folkestone, Kent on December 25, 2020. Hundreds of travellers are spending Christmas Day as they wait to resume their journey to the Port of Dover and across The Channel now that the borders with France have reopened. (Photo by Gareth Fuller/PA Images via Getty Images) 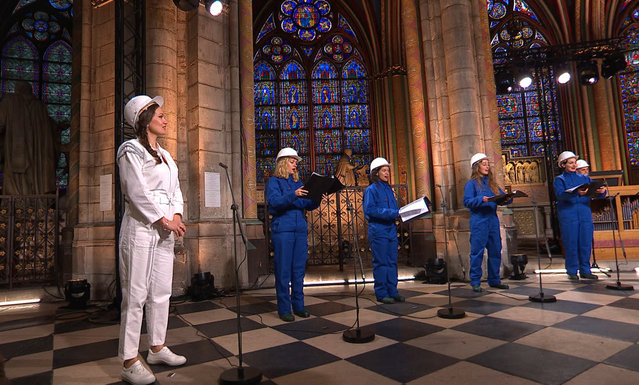 In this photo provided by Maitrise Notre-Dame de Paris soprani singer Julie Fuchs and the Notre Dame Cathedral choir recording a Christmas concert on Saturday, December 19, 2020, inside Notre Dame Cathedral in Paris. The concert will be broadcasted on French television on Christmas. (Photo by MSNDP/Musique Sacree à Notre-Dame de Paris via AP Photo) 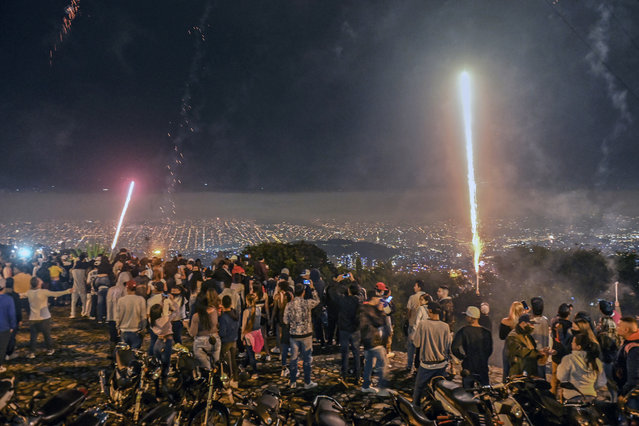 People watch fireworks during the Alborada, a tradition to celebrate the arrival of the Christmas season, in Medellin, Colombia, on December 1, 2020 amid the COVID-19 novel coronavirus pandemic. (Photo by Joaquin Sarmiento/AFP Photo) 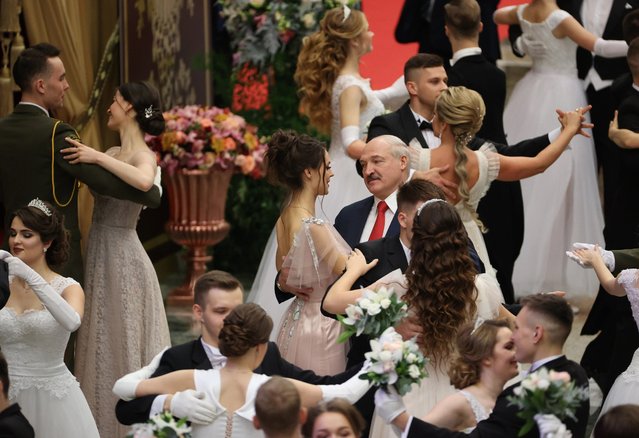 A photograph made available on 30 December 2020 shows Belarusian President Alexander Lukashenko (C) dancing with a young woman at a New Year's ball for youth in Minsk, Belarus, 29 December 2020. (Photo by Maxim Guchek/EPA/EFE) 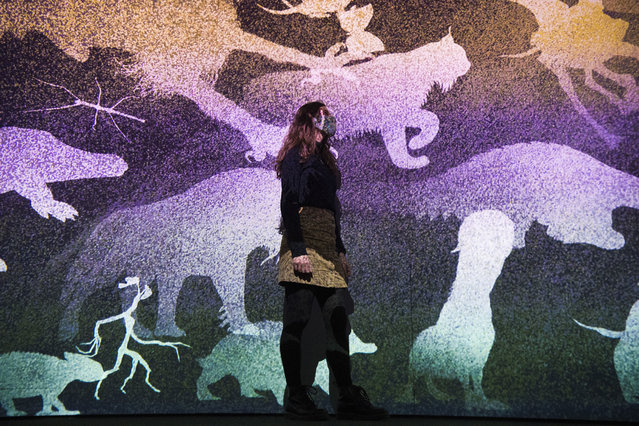 A member of museum staff looks at a light installation during a preview of Fantastic Beasts: The Wonder of Nature, at the Natural History Museum in London on December 8, 2020. The exhibition explores the natural world's connections with mythical animals such as dragons, unicorns and sea monsters and the beasts seen in the Wizarding World. (Photo by Kirsty O'Connor/PA Images via Getty Images) 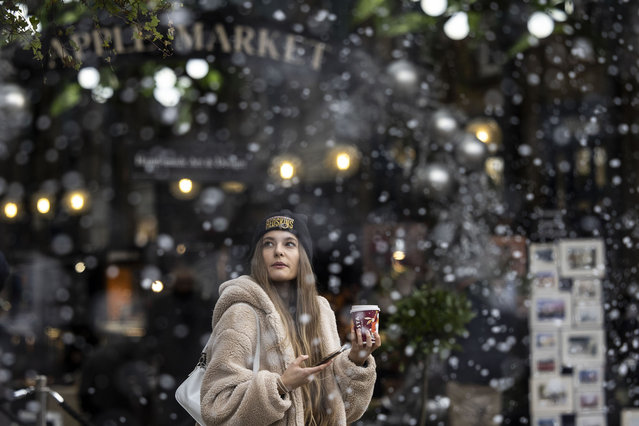 A member of the public walks through fake snow in Covent Garden on December 16, 2020 in London, England. In “Tier 3” of England's pandemic-control measures, restaurants and pubs will be limited to takeaway and delivery, although shops are allowed to remain open. (Photo by Dan Kitwood/Getty Images) 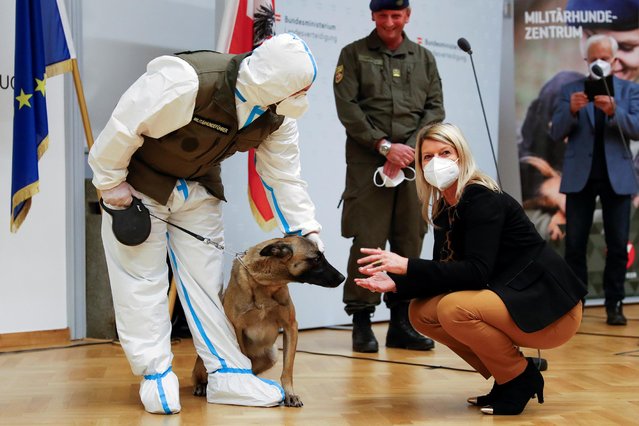 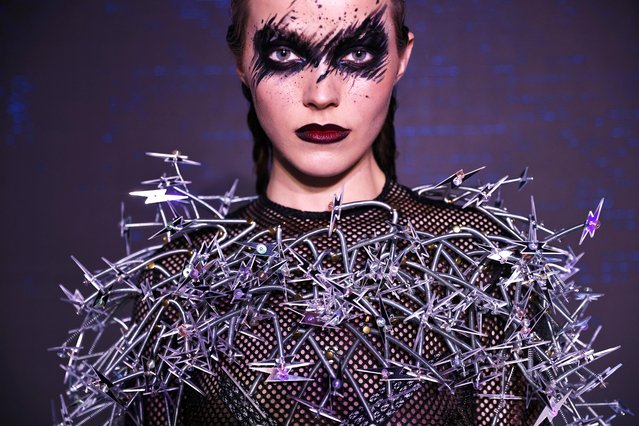 Model poses with a piece made with recycled materials at a fashion show in Taipei, Taiwan, December 18, 2020. (Photo by Ann Wang/Reuters) 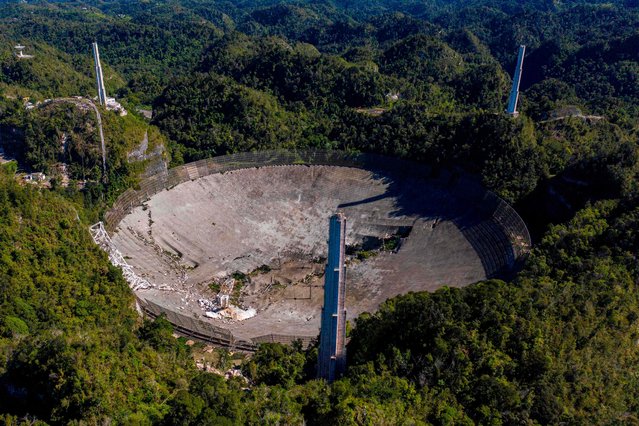 This aerial view shows the damage at the Arecibo Observatory after one of the main cables holding the receiver broke in Arecibo, Puerto Rico, on December 1, 2020. The radio telescope in Puerto Rico, which once starred in a James Bond film, collapsed Tuesday when its 900-ton receiver platform fell 450 feet (140 meters) and smashed onto the radio dish below. (Photo by Ricardo Arduengo/AFP Photo) 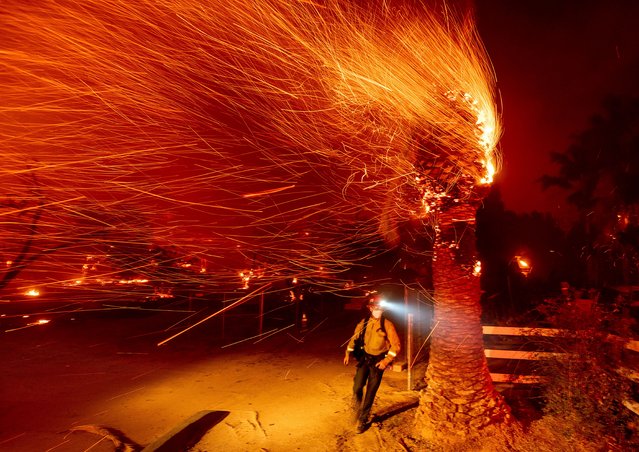 A firefighter passes a burning tree while battling the Bond Fire in the Silverado community of Orange County, Calif., on Thursday, December 3, 2020. (Photo by Noah Berger/AP Photo)

SpaceX's first super heavy-lift Starship SN8 rocket explodes during a return-landing attempt after it launched from their facility on a test flight in Boca Chica, Texas U.S. December 9, 2020. (Photo by Gene Blevins/Reuters) 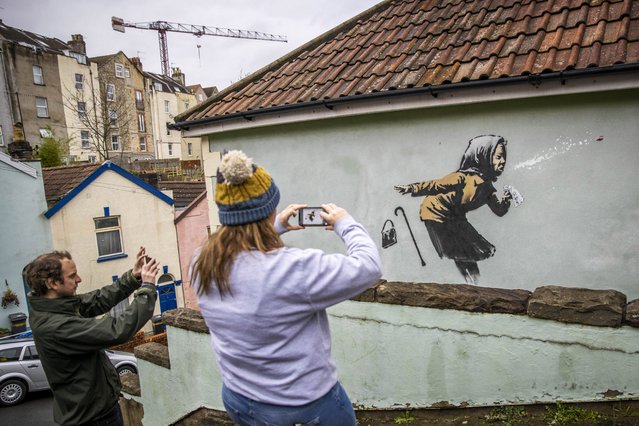 A potential Banksy has appeared on Vale Street in Bristol, United Kingdom on December 10, 2020. The elusive artist is from the city and is known for creating new works without anyone catching him in the act. An image of an old woman sneezing without covering her mouth has been spotted on a wall in the Totterdown area - a possible nod to the current health crisis. Crowds are already gathering at the bottom of Vale Street – one of Britain's steepest roads – to take pictures and discuss. (Photo by South West News Service/Action Press) 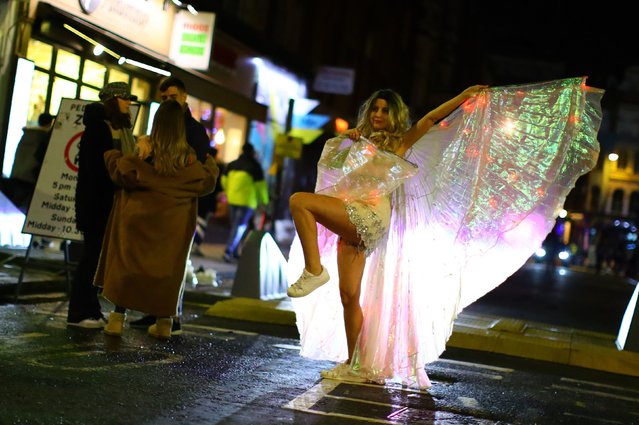 People party on a street as pubs shut for the night due to tier 3 restrictions in Soho, as the spread of the coronavirus disease (COVID-19) continues in London, Britain, December 15, 2020. (Photo by Aaron Chown/The Sun) 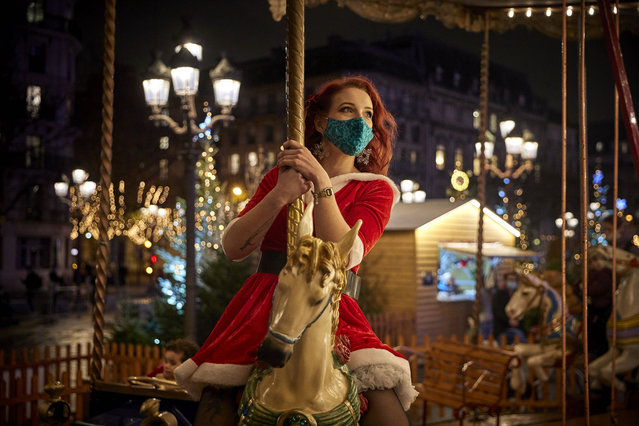 A Parisian enjoys the free traditional carousel at the Christmas Village at Hotel de Ville in Paris, as France prepares to exit from strict lockdown on Tuesday in time for Christmas on December 14, 2020 in Paris, France. France is trading its second nationwide lockdown for a more lenient curfew despite Covid-19 hospitalizations rising slightly in recent days, but are still within the range deemed acceptable for easing the restrictions imposed on October 30. However, bars, restaurants, museums, theatres and cinemas must remain shut until least the first week of January. (Photo by Kiran Ridley/Getty Images) 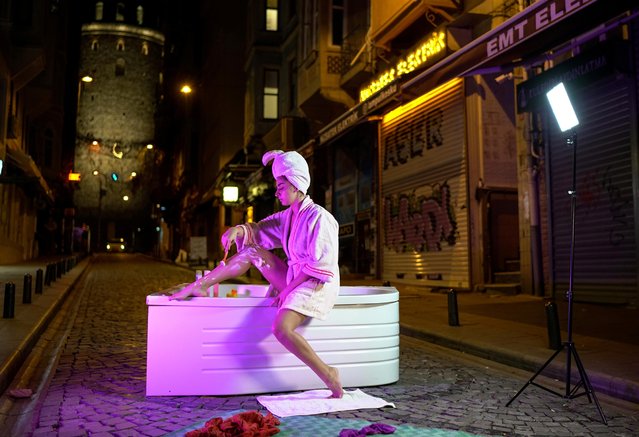 Artist Sayna Soleimanpour shaves her legs in a bathtub as she performs a photoshoot in protest against the mistreatment and alienation of Turkish women based on their clothing, during a two-day curfew amid the spread of the coronavirus disease (COVID-19), on a street leading to the historical Galata Tower in Istanbul, Turkey, late December 25, 2020. (Photo by Umit Bektas/Reuters)
Edit Del
02 Mar 2021 09:09:00, post received 0 comments
Publication archive:
←   →
Popular tags:
All tags
Last searches: