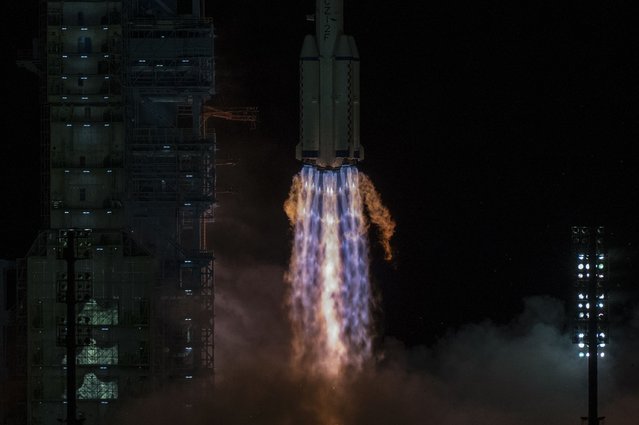 The Shenzhou-13 carried by a Long March-2F rocket launches with three astronauts from China Manned Space Agency on board early on October 16, 2021 from the Jiuquan Satellite Launch Center in the Gobi Desert near Jiuquan, China. The crew of the Shenzhou-13 spacecraft will be carried to the Tianhe core module of the new space station China is building and will stay for six months, the standard for all future missions. It is the second crewed launch this year. (Photo by Kevin Frayer/Getty Images) 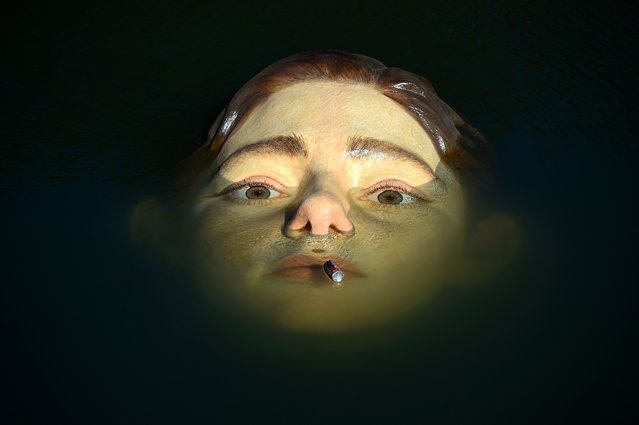 This photograph taken on October 14, 2021 shows the “Bihar” (Tomorrow in Basque) sculpture by Mexican hyperrealist artist Ruben Orozco, submerged in the Nervion river of the northern Spanish Basque city of Bilbao. (Photo by Ander Gillenea/AFP Photo) 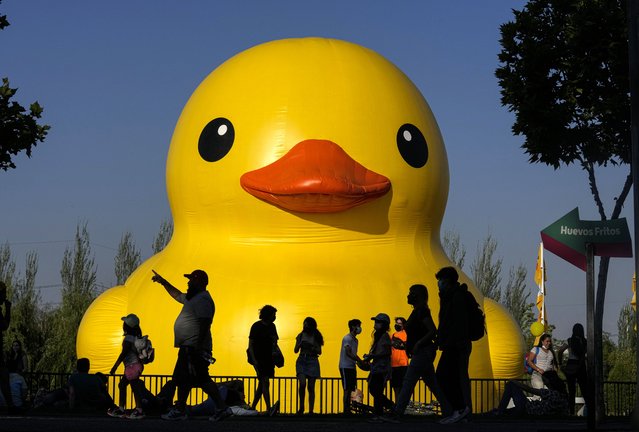 Visitors are silhouetted against a giant inflatable rubber duck designed by Dutch artist Florentijn Hofman floating in a lake at the Parque de la Familia in Santiago, Chile, Thursday, October 28, 2021. The world-famous sculpture of the iconic bath time toy is a part of the annual “Hecho en Casa”, or Made at Home festival that celebrates urban art. (Photo by Esteban Felix/AP Photo) 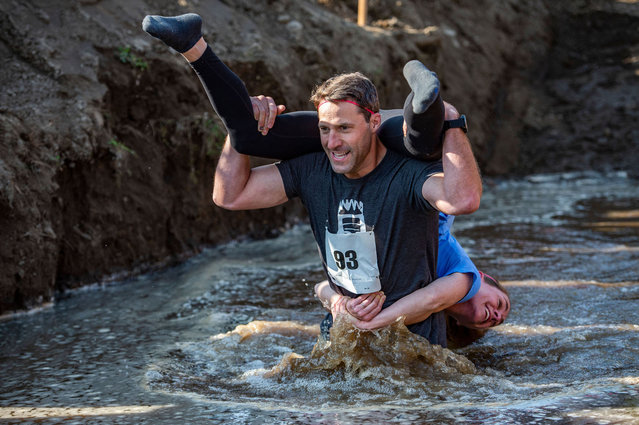 Chad Rowley and his wife Susan race during the 22nd North American Wife Carrying Championship at Sunday River Resort in Newry, Maine, on October 9, 2021. Couples compete on a 278-yard (254-meter) obstacle course for a prize of wife's weight in beer and five times her weight in money. Winners are invited to the world championship in Finland where the sport originated. (Photo by Joseph Prezioso/AFP Photo) 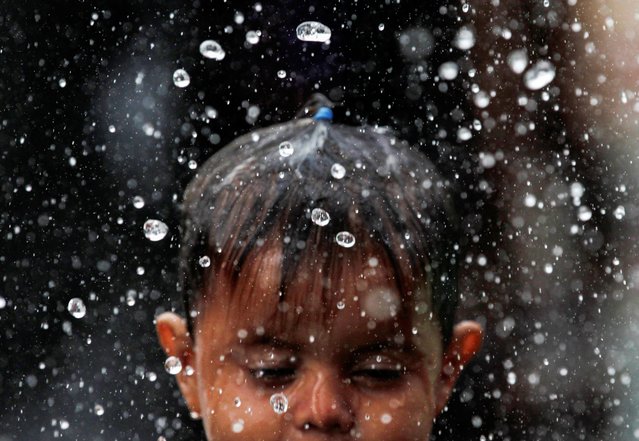 A migrant girl with sunburns on her skin is bathed by her mom with rain water as they take part in a caravan heading to Mexico City, in Mapastepec, Mexico on October 31, 2021. (Photo by Daniel Becerril/Reuters) 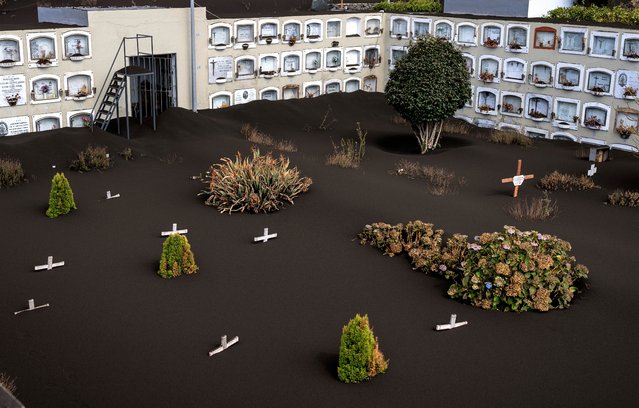 Ash cover the graves at the La Palma cemetery as volcano continues to erupt on this Canary island, Spain, Friday, October 29, 2021. An erupting volcano in the Spanish island of La Palma continued to emit vast amounts of magma, gases and ash, after days of intense seismic activity and more than five weeks since it erupted. (Photo by Emilio Morenatti/AP Photo) 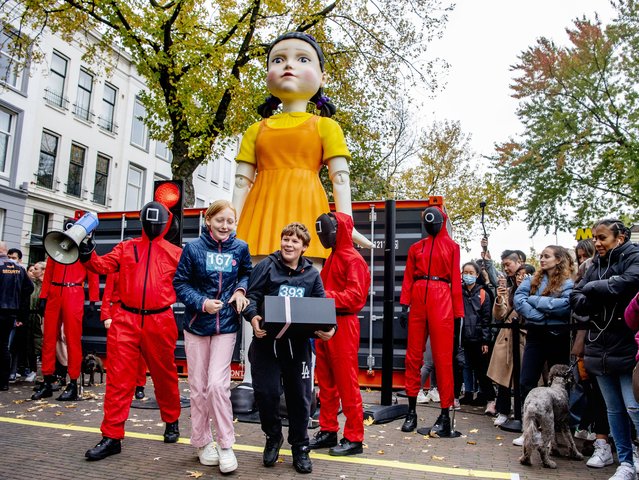 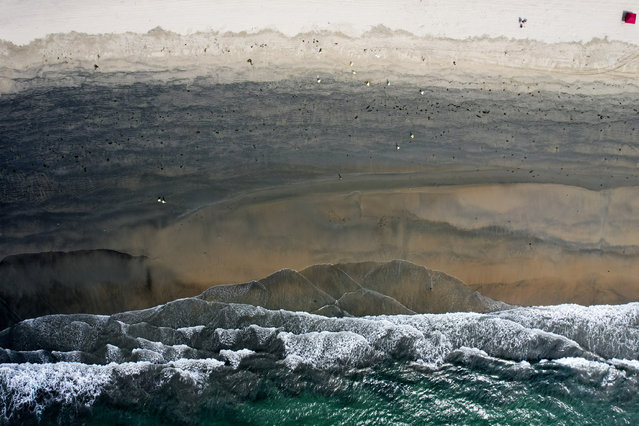 In this aerial image taken with a drone, workers in protective suits clean the contaminated beach after an oil spill in Newport Beach, Calif., on Wednesday, October 6, 2021. Some of the crude oil that spilled from a pipeline into the waters off Southern California has been breaking up naturally in ocean currents, a Coast Guard official said Wednesday as authorities sought to determine the scope of the damage. (Photo by Ringo H.W. Chiu/AP Photo) 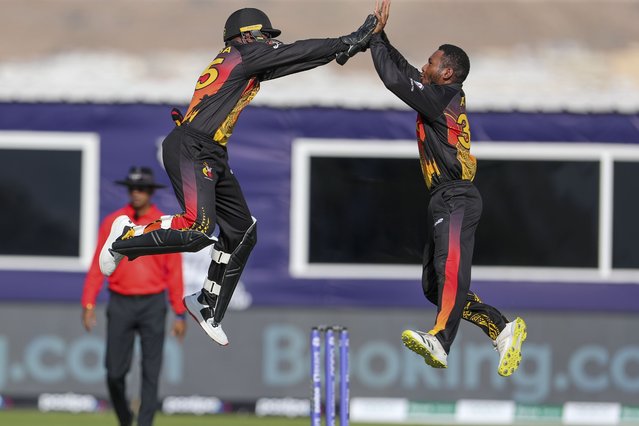 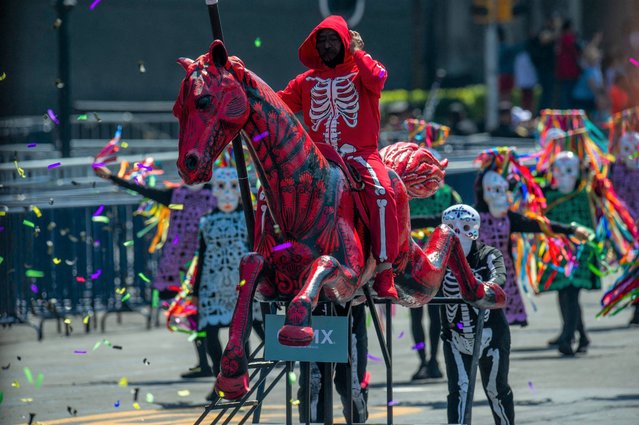 People on stilts take part in the Day of the Dead parade at Zocalo Square in Mexico City on October 31, 2021. (Photo by Claudio Cruz/AFP Photo) 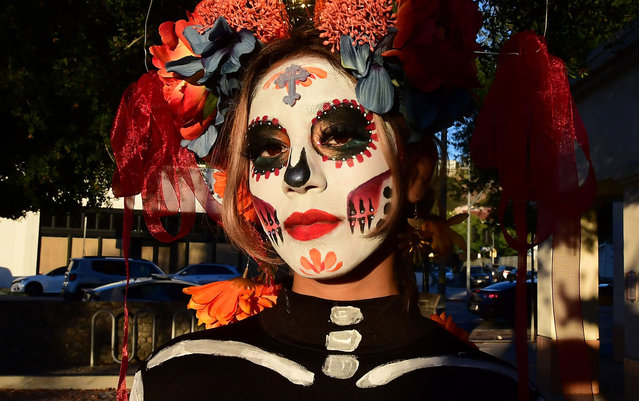 Brittany Bautista gets dressed up for a Dia de los Muertos (Day of the Dead) procession hosted by the Southwest Voter Registration Education Project (SVREP) on October 26, 2021 in Los Angeles. SVREP is the oldest Latino voter registration non-profit in the US empowering Latinos to mobilize voters. (Photo by Frederic J. Brown/AFP Photo) 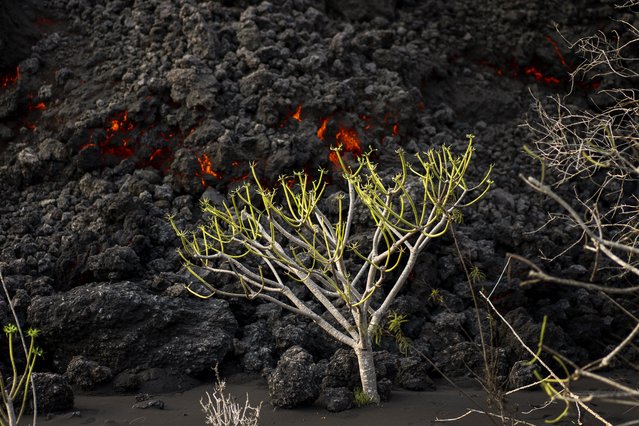 Lava advances as a volcano continues to erupt on the Canary island of La Palma, Spain, Friday, October 29, 2021. (Photo by Emilio Morenatti/AP Photo) 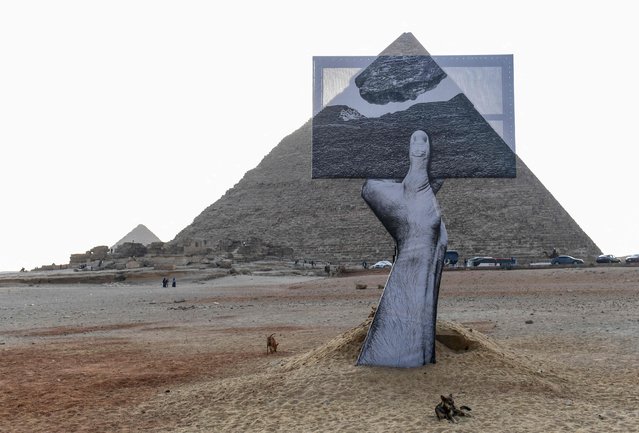 Dogs linger around an art installation in front of the pyramids at the ancient Giza necropolis on the western outskirts of the Egyptian capital's twin city of Giza, on October 23, 2021, part of an exhibition entitled “Forever is Now” organized by Art D’Egypte including large-scale sculptures and installations by ten international contemporary artists. (Photo by Ahmed Hasan/AFP Photo) 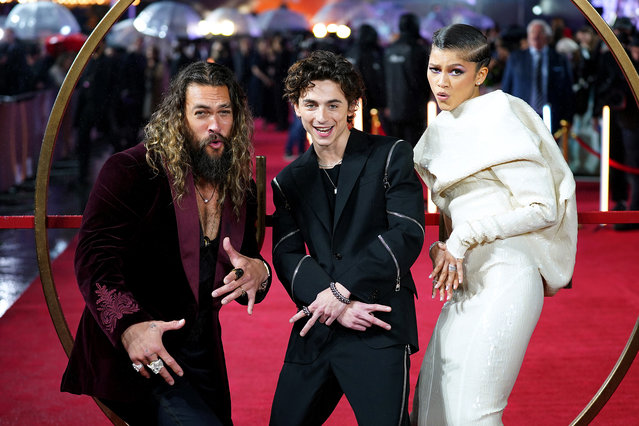 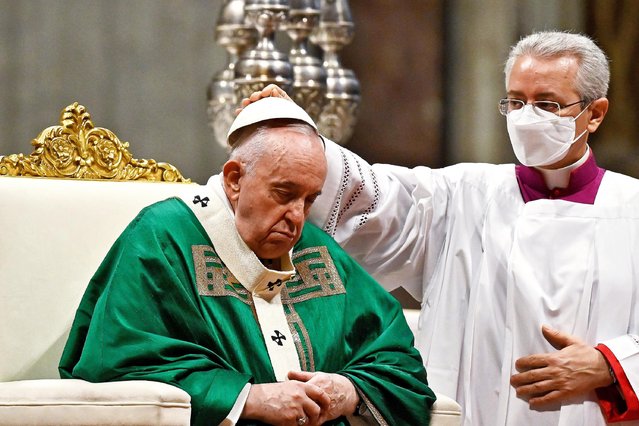 Pope Francis holds the mass marking the Roman Catholic Church's World Day of the Poor, in St. Peter's Basilica at the Vatican on November 14 2021. (Photo by Alberto Pizzoli/AFP Photo) 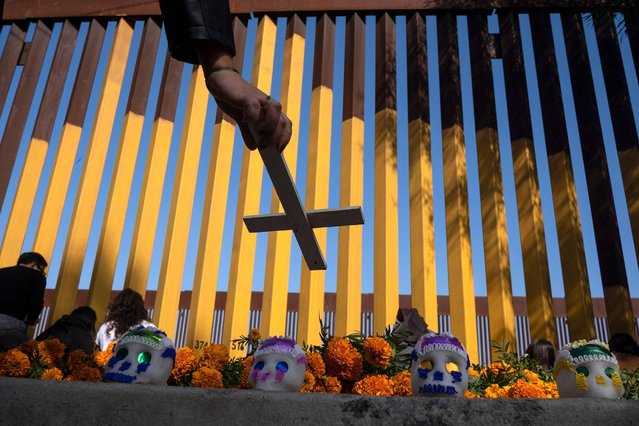 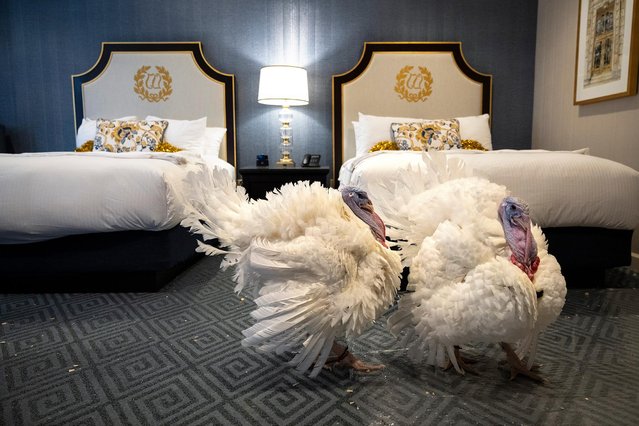 Peanut Butter and Jelly, the National Thanksgiving Turkey and alternate, walk about in their suite at the Willard Hotel following a news conference held by the National Turkey Federation November 18, 2021 in Washington, DC. The two turkeys from Jasper, Indiana will be pardoned during by President Joe Biden during a Friday ceremony in the Rose Garden of the White House. (Photo by Drew Angerer/Getty Images) 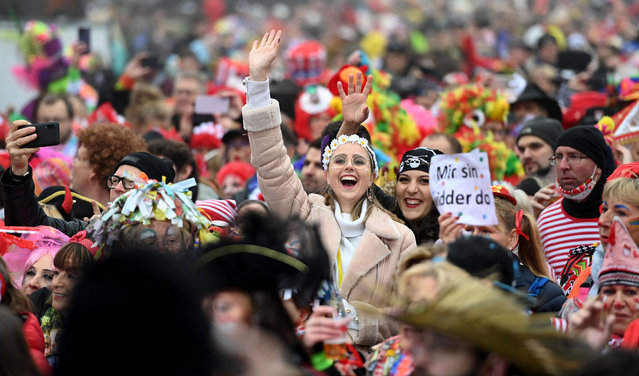 Revellers celebrate the start of the Carnival season in Cologne, western Germany, on November 11, 2021. Due to the tense Corona situation, the city of Cologne has introduced the 2G rule at the Altstadt carnival hotspots. This means that only proven vaccinated and recovered people can celebrate at carnival events and parties in pubs and in the restricted zones in the old town. (Photo by Ina Fassbender/AFP Photo) 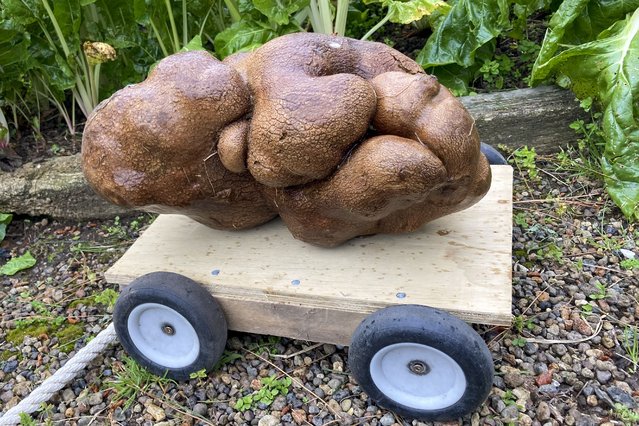 A large potato sits on a trolly in a garden at Donna and Colin Craig-Browns home near Hamilton, New Zealand, Wednesday, November 3, 2021. The New Zealand couple dug up a potato the size of a small dog in their backyard and have applied for recognition from Guinness World Records. They say it weighed in at 7.9 kilograms (17 pounds), well above the current record of just under 5 kg. They've named the potato Doug, because they dug it up. (Photo by Donna Craig-Brown via AP Photo)
Edit Del
18 Jun 2022 04:44:00, post received 0 comments
Publication archive:
←   →
Popular tags:
All tags
Last searches: