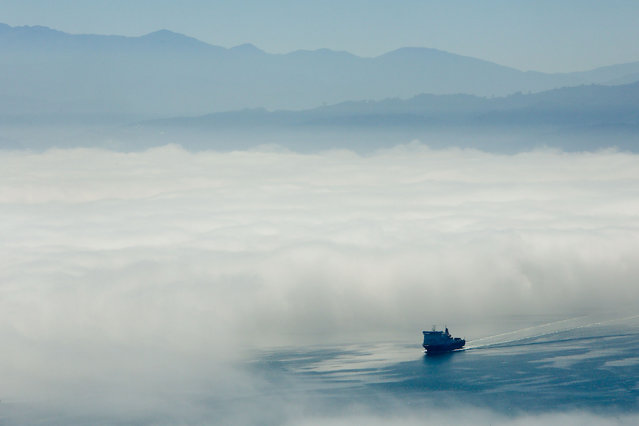 The Bluebridge ferry sails out of the fog on Wellington Harbour on February 20, 2014 in Wellington, New Zealand. (Photo by Hagen Hopkins/Getty Images) 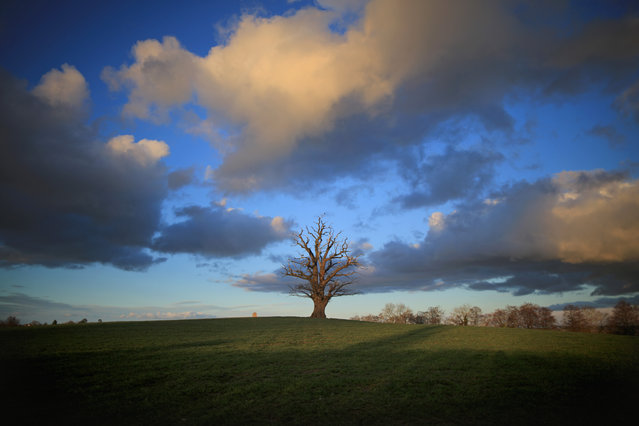 An ancient oak tree sits in a Shropshire field as the first signs of Spring begin to show across the United Kingdom on February 19, 2014 in Bridgnorth, England. (Photo by Christopher Furlong/Getty Images) 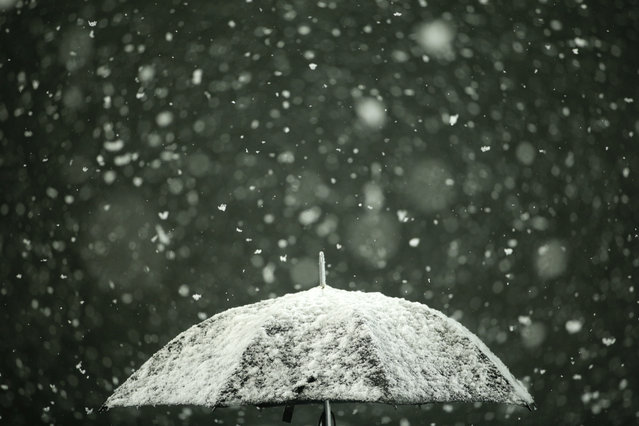 Snow sits on a umbrella before the men's ski halfpipe final at the Rosa Khutor Extreme Park, at the 2014 Winter Olympics, Tuesday, February 18, 2014, in Krasnaya Polyana, Russia. (Photo by Jae C. Hong/AP Photo) 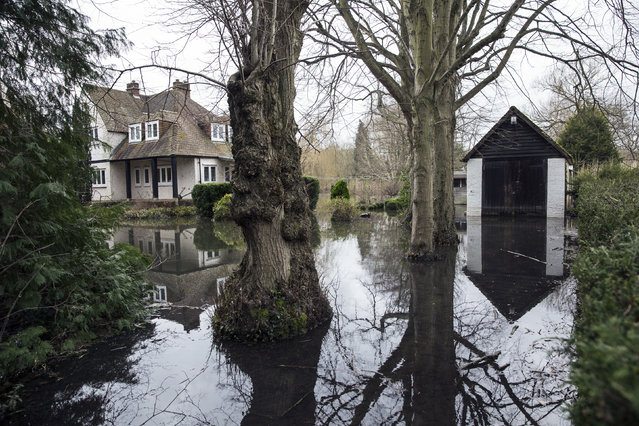 A property situated adjacent to the river Thames is surrounded by flood water on February 17, 2014 in Shiplake, England. (Photo by Oli Scarff/Getty Images) 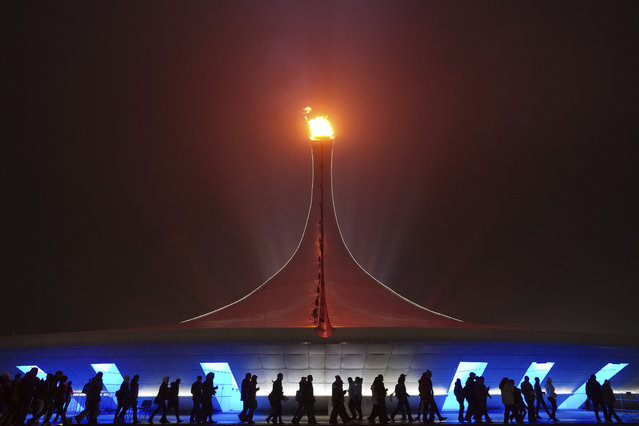 Spectators walk past the Olympic flame on a foggy night in Olympic Park during the 2014 Winter Olympics on Sunday, February 16, 2014, in Sochi, Russia. (Photo by J. David Ake/AP Photo) 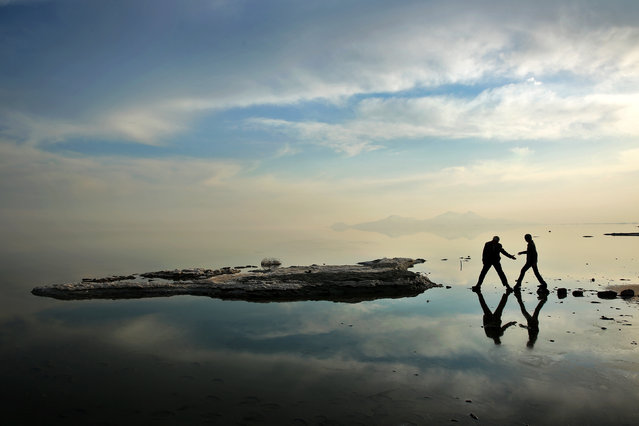 In this Saturday, February 15, 2014 photo, two men walk toward salt-covered rocks that were once deep underwater at Lake Oroumieh, in northwestern Iran. Oroumieh, one of the biggest saltwater lakes on Earth, has shrunk more than 80 percent to 1,000 square kilometers (nearly 400 square miles) in the past decade, mainly because of climate change, expanded irrigation for surrounding farms and the damming of rivers that feed the body of water, experts say. (Photo by Ebrahim Noroozi/AP Photo) 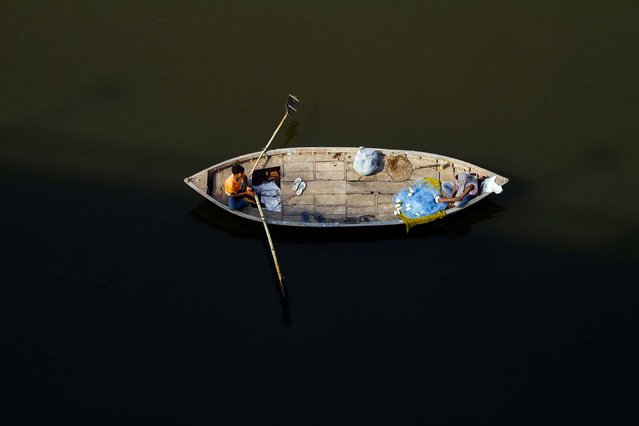 A fisherman rows a boat in the River Ganges in Allahabad, India. (Photo by Rajesh Kumar Singh/Associated Press) 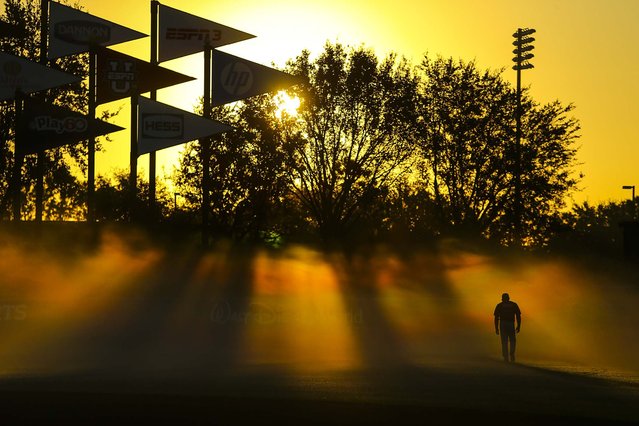 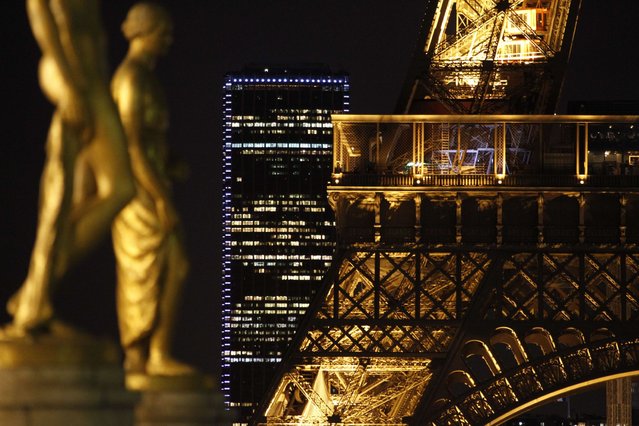 A picture taken from the Trocadero Esplanade shows statues, the Montparnasse Tower (C) and a detail of the Eiffel Tower in Paris on February 13, 2014. (Photo by Ludovic Marin/AFP Photo) 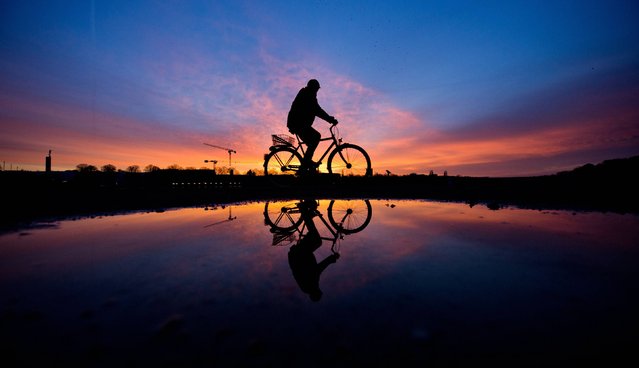 A cyclist is silhouetted against the rising sun and reflected in a puddle in Hannover, northern Germany, Tuesday, February 18, 2014. (Photo by Julian Stratenschulte/AP Photo/DPA) The New York skyline and the One World Trade Center are seen in the distance as a man makes his commute after a night of snow from New York City to Exchange Place in New Jersey. (Photo by Eduardo Munoz/Reuters) 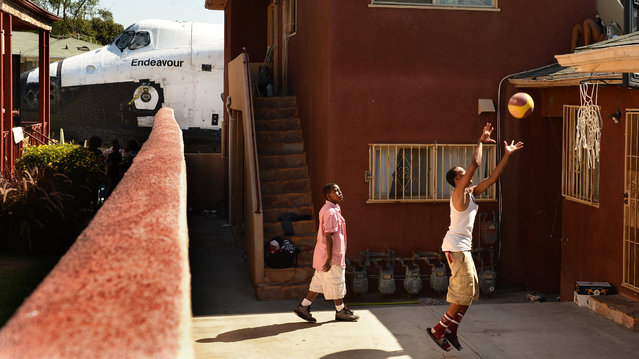 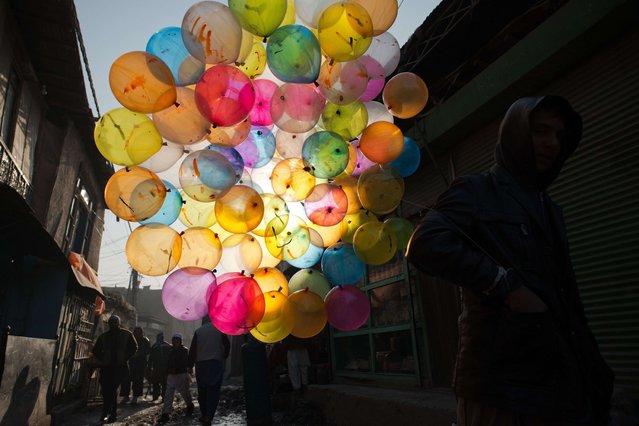 An Afghan balloon vendor walks along a street in Kabul on February 18, 2014. (Photo by Nicolas Asfouri/AFP Photo) 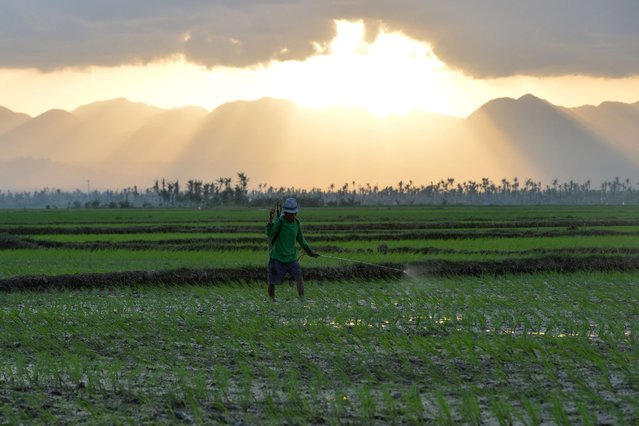 A farmer sprays pesticide on a rice field as the sun sets in the super Typhoon Haiyan stricken town of Santa Fe, in Leyte province, central Philippines on February 17, 2014, as the Philippines marks 100 days since the devastating storm. (Photo by Ted Aljibe/AFP Photo) 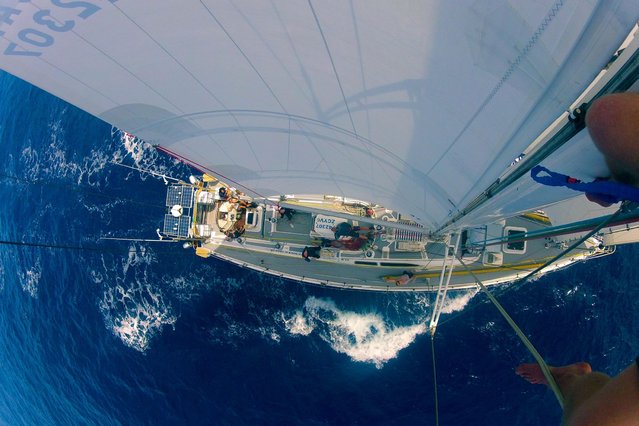 A British man has travelled 8,000 miles around the world refusing to use any motorised transpor. (Photo by Caters News) 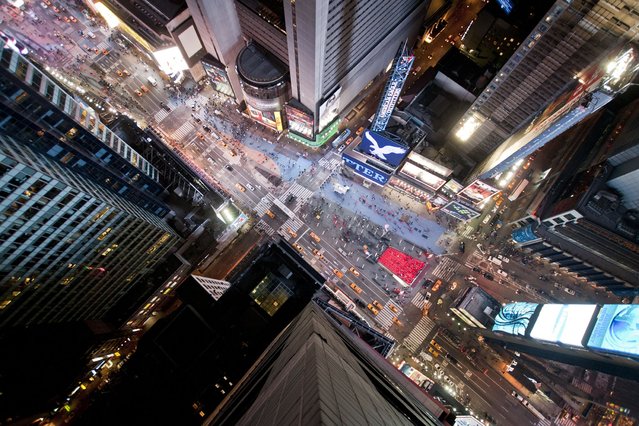 A photo of Times Square from the top of a building taken by adventure photographer Lucinda Grange during a trip to the Big Apple in New York City. (Photo by Lucinda Grange/Barcroft USA) 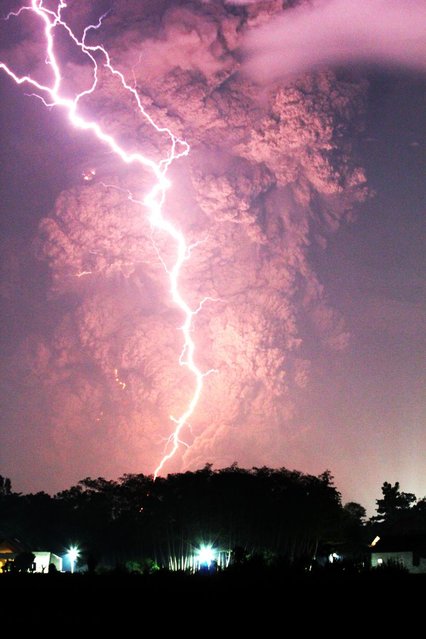 Volcanic cloud is seen from the eruption of Mount Kelud volcano as lightning strikes above the Blitar city on February 13, 2014 in Indonesia. (Photo by ANDIKA/Panjalu Images/Barcroft Media) 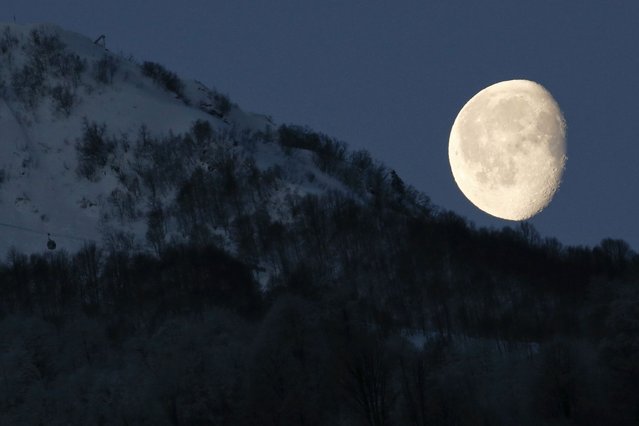 The moon is pictured above the mountains in Rosa Khutor during the 2014 Sochi Winter Olympics. (Photo by Arnd Wiegmann/Reuters) 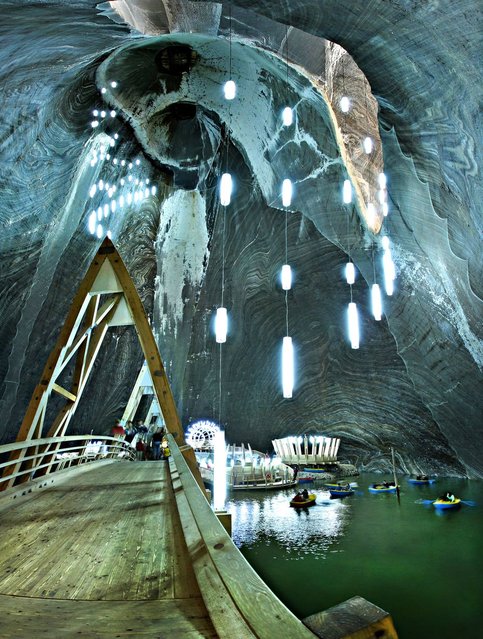 Tourists taking boat rides in the underground lake located within the salt mine museum in Turda, Romania. (Photo by Sorin Toma/Hepta/Barcroft Media) 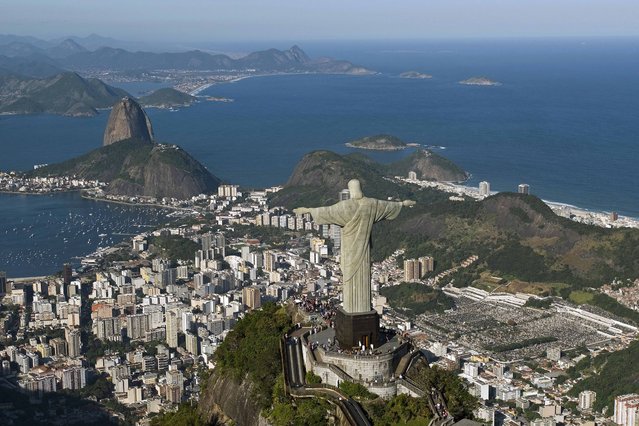 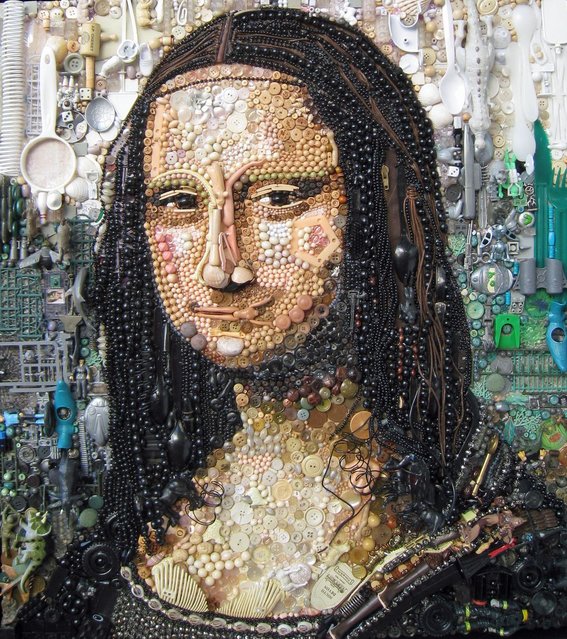 One artist doesnt mind if people class her work as rubbish. Thats because all of her pieces are made out of junk found in charity shops, car boot sales and in and around her home. (Photo by Caters News) 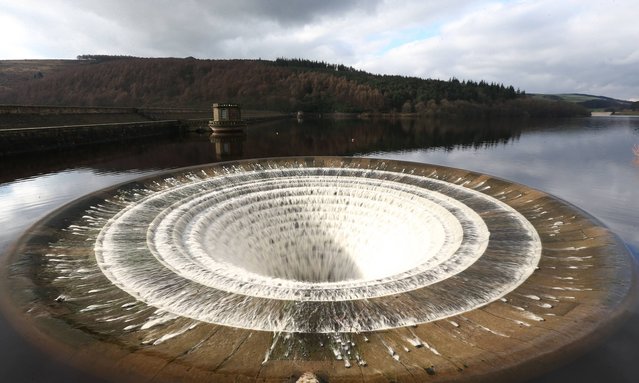 Water flows down the “plughole” on the Ladybower Reservoir, one of two bell-mouthed 80ft wide stone overflows, on February 19, 2014. (Photo by Lynne Cameron/PA Wire) 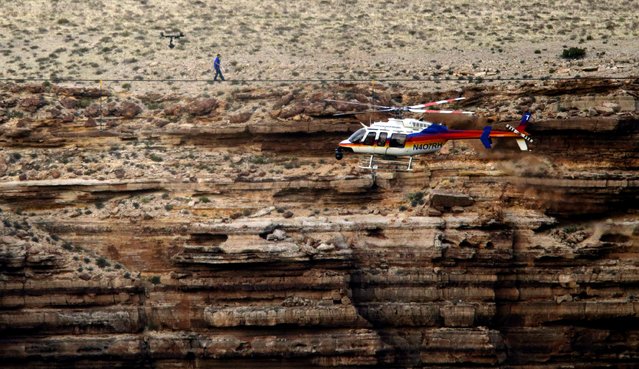 Daredevil Nik Wallenda crosses a tightrope 1,500 feet above the Little Colorado River Gorge, Ariz., on Sunday, June 23, 2013, on the Navajo Nation outside the boundaries of Grand Canyon National Park. In a February 8, 2014 interview, Wallenda said he hopes to cross the Tallulah Gorge in the northeast Georgia mountains in the near future, as his great-grandfather, Karl Wallenda, did in 1970. (Photo by Rick Bowmer/AP Photo) 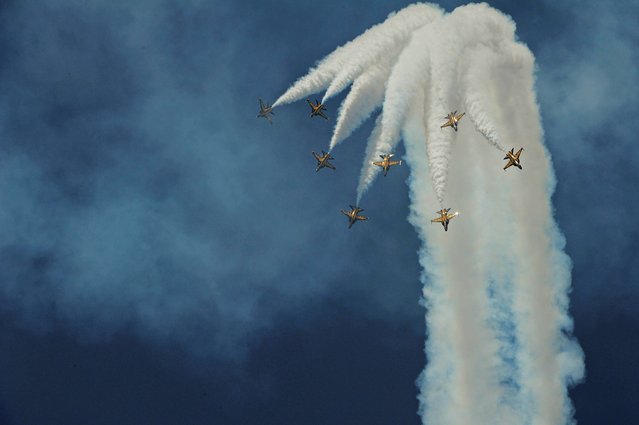 The T-50 jets of South Korean Air Force aerobatics team, the Black Eagles, perform a maneuver in the aerial display at the Singapore Air Show on Saturday, February 15, 2014. (Photo by Joseph Nair/AP Photo) 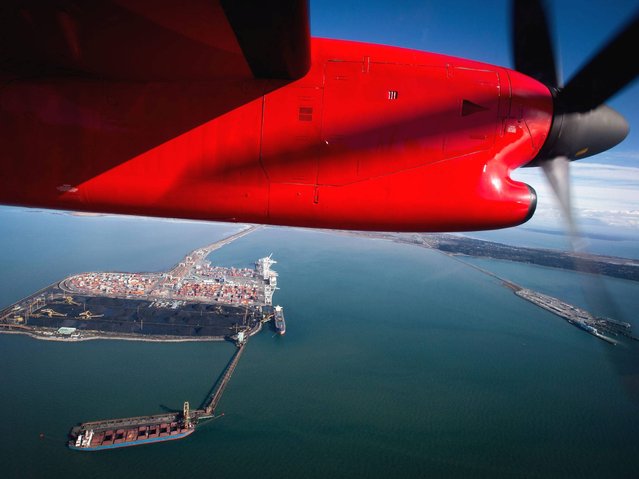