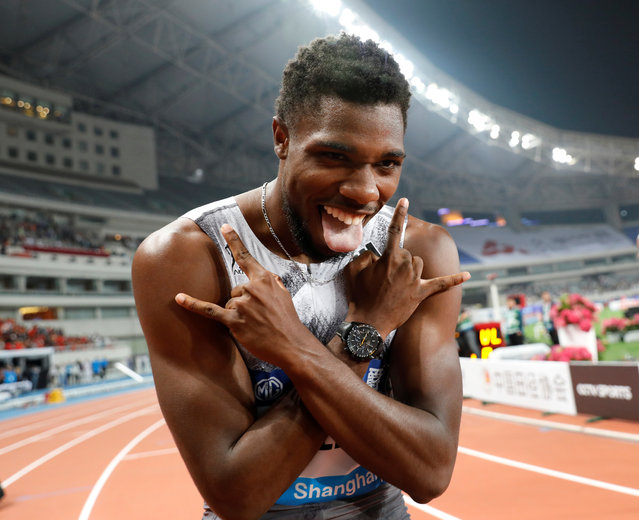 Noah Lyles of USA celebrates after winning the men's 100m athletics event during the IAAF Diamond League competition in Shanghai on May 18, 2019. (Photo by Aly Song/Reuters) 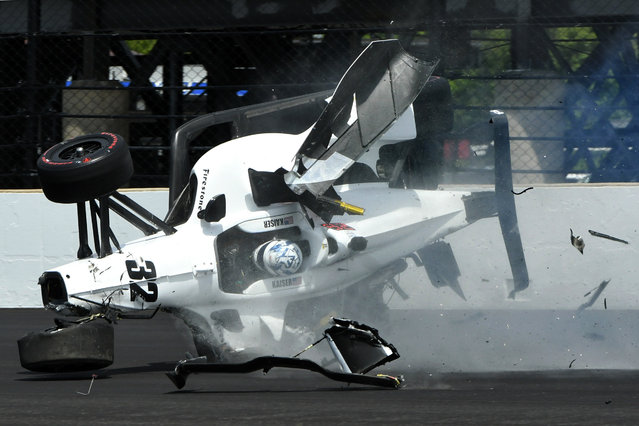 The car driven by Kyle Kaiser goes airborne after hitting the wall along the third turn during practice for the Indianapolis 500 IndyCar auto race at Indianapolis Motor Speedway, Friday, May 17, 2019 in Indianapolis. (Photo by Tom Pyle/AP Photo) 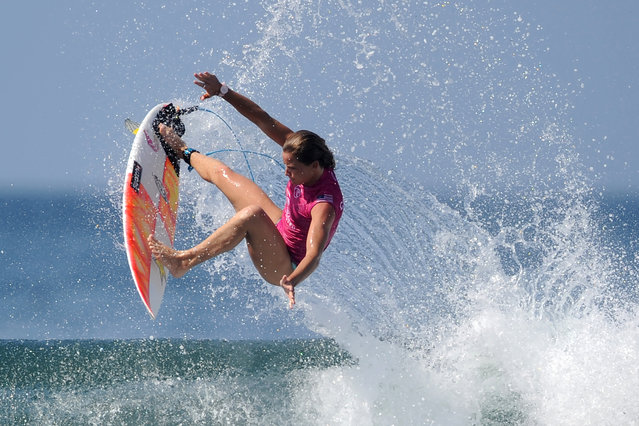 Courtney Conlogue of the US performs a manouvre on a wave one day before the start of the World Surf League women's championship tour surfing event at Keramas in Gianyar on Indonesia's resort island of Bali on May 12, 2019. (Photo by Sonny Tumbelaka/AFP Photo) 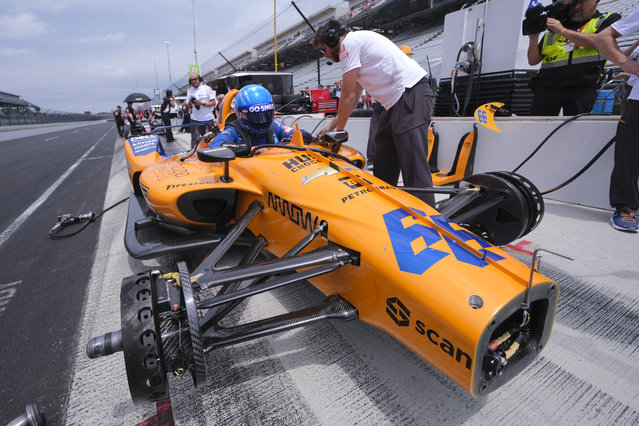 Fernando Alonso, of Spain, climbs into his car during practice for the Indianapolis 500 IndyCar auto race at Indianapolis Motor Speedway, Friday, May 17, 2019 in Indianapolis. (Photo by A.J. Mast/AP Photo) 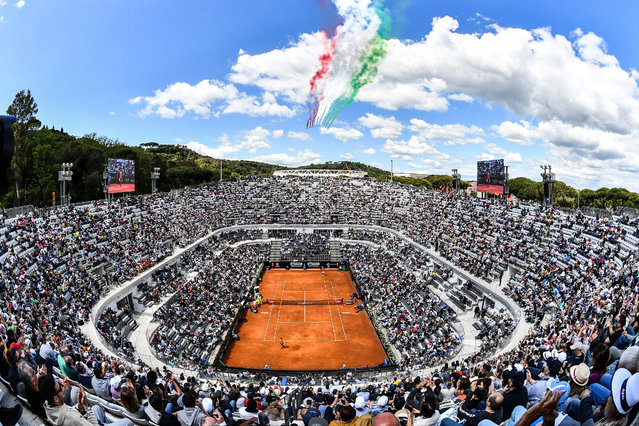 The Frecce Tricolori air squadron flies over the Foro Italico as Serbia's Novak Djokovic plays against Canada's Denis Shapovalov during their ATP Masters tournament tennis match in Rome on May 16, 2019. (Photo by Andreas Solaro/AFP Photo) 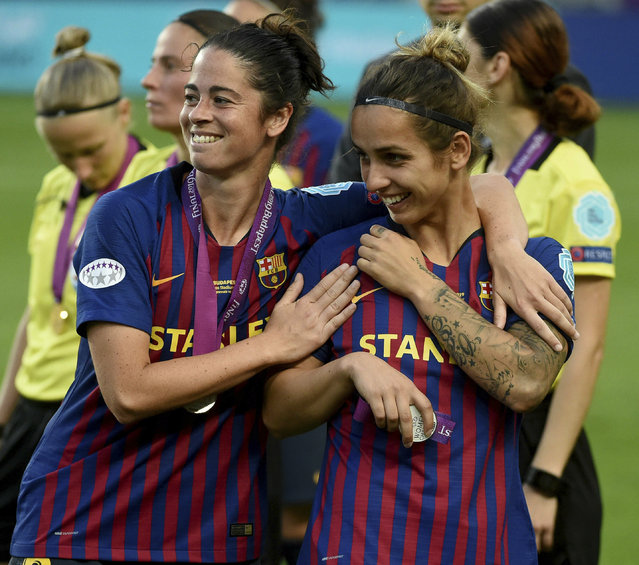 Marta Torrejon, left, and Natasha Andonova of Barcelona after their team lost to Olympique Lyon 4-1 in the women's soccer Champions League final match at the Groupama Arena in Budapest, Hungary, Saturday, May 18, 2019. (Photo by Balazs Czagany/MTI via AP Photo) 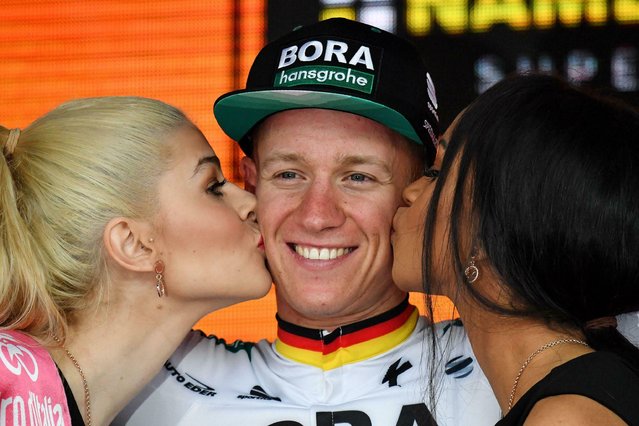 Germany's Pascal Ackermann receives the kiss of the race's hostesses as he stands on the podium after winning the the 2nd stage of the Giro d'Italia, tour of Italy cycling race, from Bologna to Fucecchio, Sunday, May 12, 2019. (Photo by Alessandro Di Meo/ANSA via AP Photo) 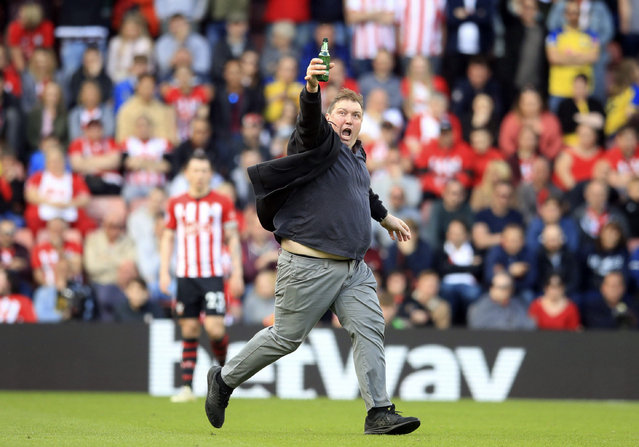 A fan runs on the pitch during the English Premier Leagues soccer match between Southampton and Huddersfield at St Mary's Stadium, Southampton, England, Sunday, May 12, 2019. (Photo by Adam Davy/PA Wire via AP Photo) 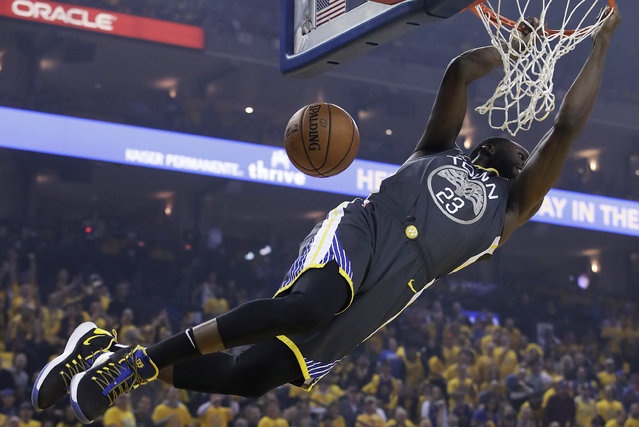 Golden State Warriors forward Draymond Green dunks against the Portland Trail Blazers during the first half of Game 2 of the NBA basketball playoffs Western Conference finals in Oakland, Calif., Thursday, May 16, 2019. (Photo by Jeff Chiu/AP Photo) 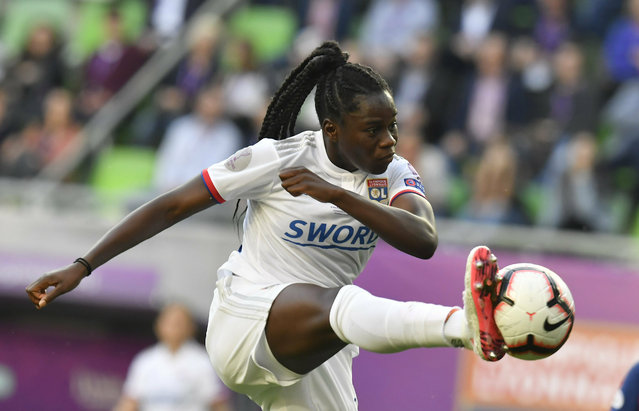 Griedge M'Bock Bathy of Lyon in action during the women's soccer UEFA Champions League final match between Olympique Lyon and FC Barcelona at the Groupama Arena in Budapest, Hungary, Saturday, May 18, 2019. (Photo by Tibor Illyes/MTI via AP Photo) 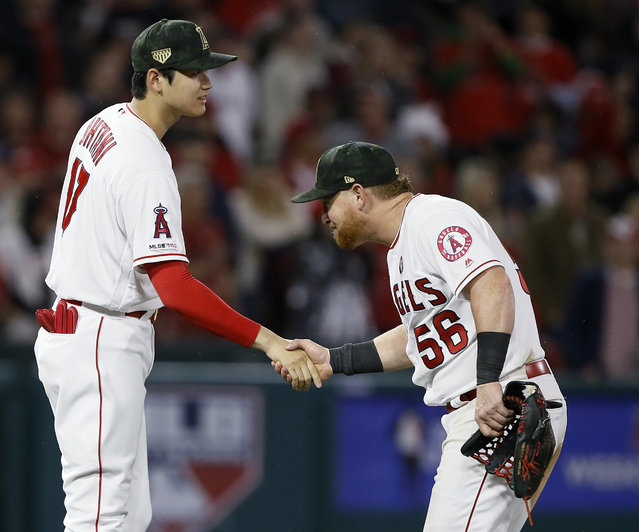 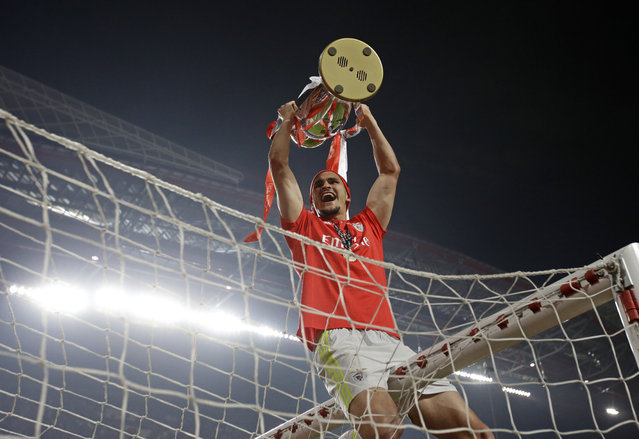 Benfica goalkeeper Ivan Zlobin holds the trophy atop the goal after the Portuguese league last round soccer match between Benfica and Santa Clara at the Luz stadium in Lisbon, Saturday, May 18, 2019. Benfica won 4-1 to clinch the championship title. (Photo by Armando Franca/AP Photo) 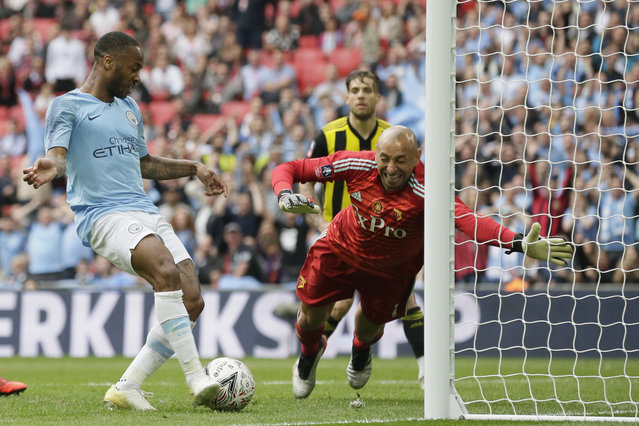 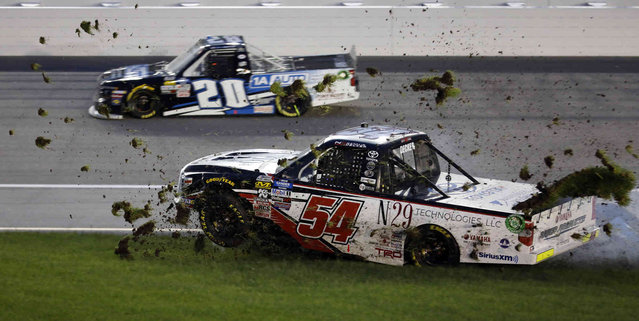 Natalie Decker (54) spins into the infield grass during the NASCAR Truck Series auto race at Kansas Speedway in Kansas City, Kan., Friday, May 10, 2019. Harrison Burton (20) gets by on the outside. (Photo by Colin E. Braley/AP Photo) 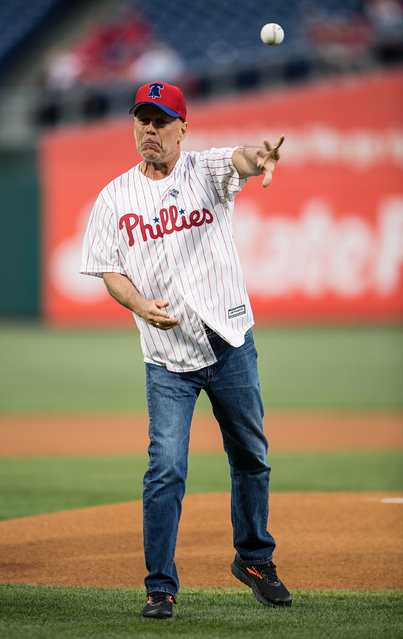 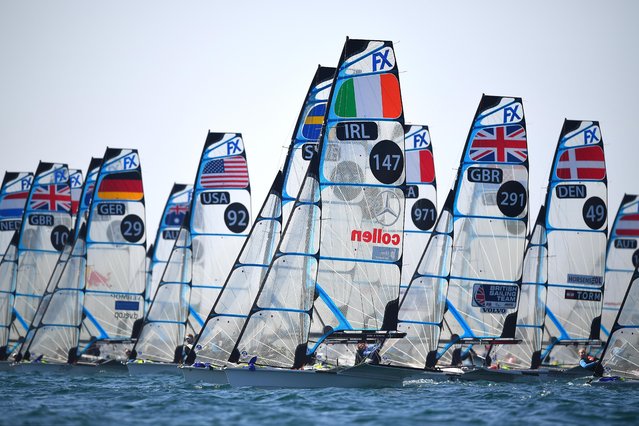 Annalise Murphy and Katie Tingle of Ireland in action at the start of a 49erFX class race on May 15, 2019 in Weymouth, England. (Photo by Clive Mason/Getty Images) 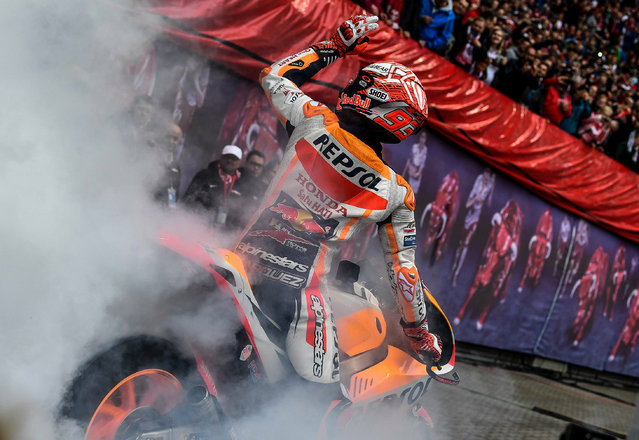 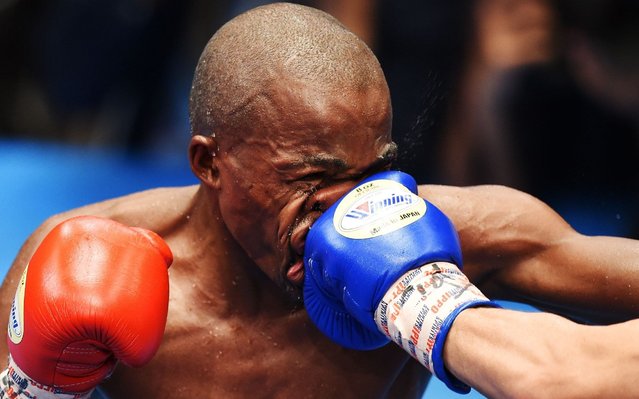 Moruti Mthalane of South Africa is punched by Masayuki Kuroda of Japan during their IBF flyweight title boxing bout in Tokyo on May 13, 2019. (Photo by Charly Triballeau/AFP Photo) 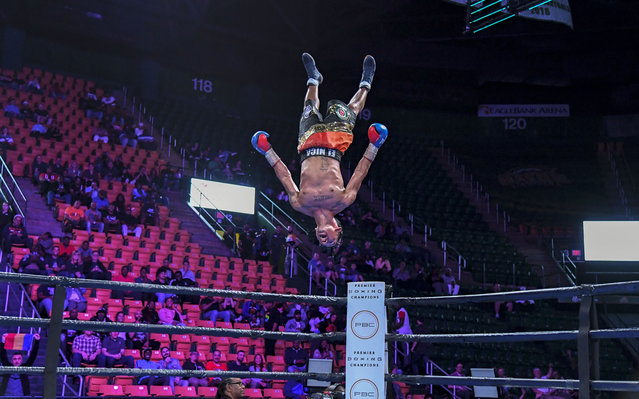 Luis Concepcion flips off the ropes after his 10 round fight against Alexandru Marin at EagleBank Arena on May 11, 2019. (Photo by Jonathan Newton/The Washington Post)
Edit Del
25 May 2019 00:03:00, post received 0 comments
Publication archive:
←   →
Popular tags:
All tags
Last searches: