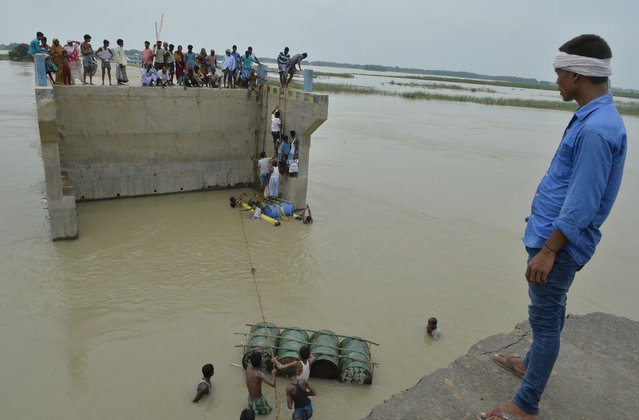 Indian villagers attempt to cross flood waters with the help of rope and empty canisters next to a washed away portion of a bridge at Palsa village in Purnia district in Bihar state on August 18, 2017. At least 221 people have died and more than 1.5 million have been displaced by monsoon flooding across India, Nepal and Bangladesh, officials said August 15, as rescuers scoured submerged villages for the missing. (Photo by Diptendu Dutta/AFP Photo) 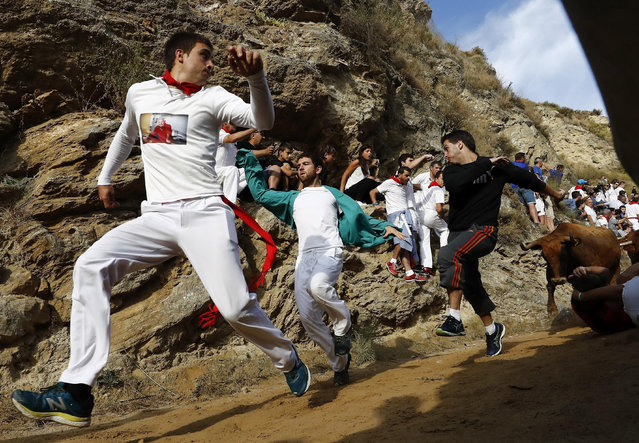 Bulls chase runners during the of Pilon bull run held in Falces, Navarra, northern Spain, 15 August 2017. Security has been tightened during the event after a woman died the previous year falling down a cliff. Four people were attended at the end of the run due to minor injuries. “El Pilon” bull run is held on a hill where runners have to avoid the herd of cows on a 800 meter long and narrow slope with the mountain on one side and a steep cliff on the other. (Photo by Jesus Diges/EPA) 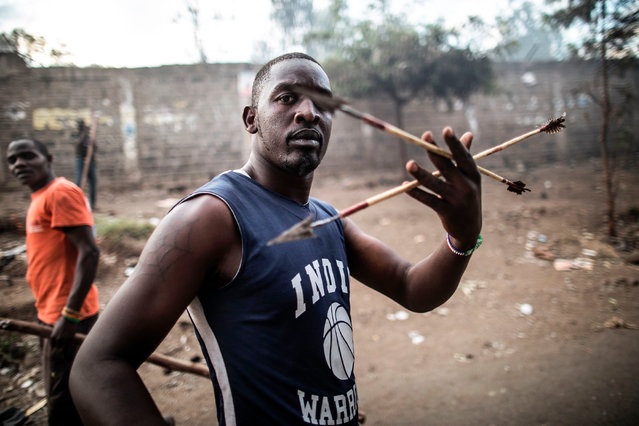 A man brandishes arrows during a street battle between Luo supporters of defeated opposition leader Raila Odinga and members of President Uhuru Kenyatta' s Kikuyu ethnic group, both living in the Mathare slum, on August 13, 2017 in Mathare, a neighborhood of the capital Nairobi. The confrontation broke out after Odinga supporters torched businesses belonging to Kikuyu, who then grouped together armed with sticks, bows and arrows. Clashes followed in which a man was severely beaten, leaving him motionless on the ground. (Photo by Marco Longari/AFP Photo) 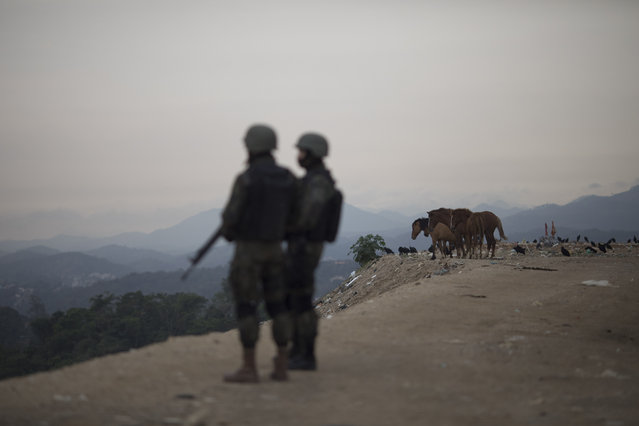 Air force personnel patrol on a landfill at the Caramujo slum in Niteroi, Brazil, Wednesday, August 16, 2017. Thousands of soldiers and police began patrolling metropolitan region of Rio de Janeiro as part of security actions to diminish the violence in the state. (Photo by Leo Correa/AP Photo) 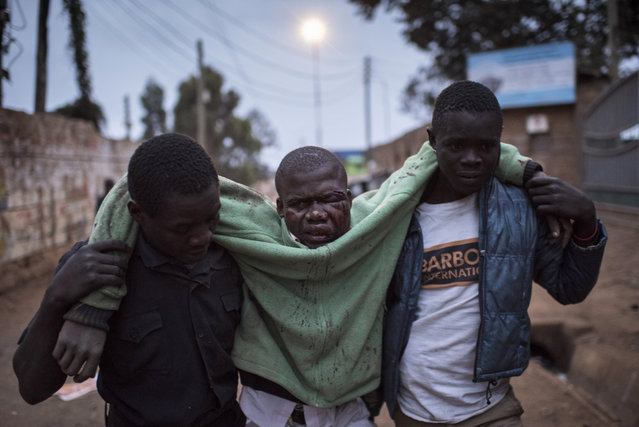 A man who was badly beaten is carried in the Kibera slum on August 12, 2017 in Nairobi, Kenya. Police clashed with opposition supporters overnight as Uhuru Kenyatta was announced as president for his second term. (Photo by Andrew Renneisen/Getty Images) 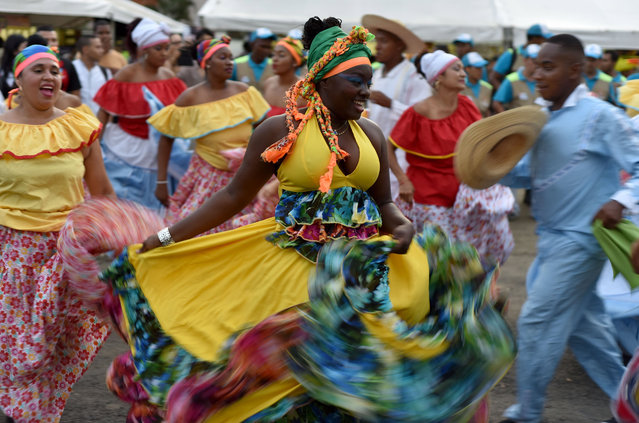 Members of a dance group perform during the 21st edition of the Pacific Music Festival Petronio Alvarez in Cali, Colombia, 17 August 2017. The annual festival presents five days of folk music from the Colombian Pacific coast. (Photo by Ernesto Guzman Jr./EPA) 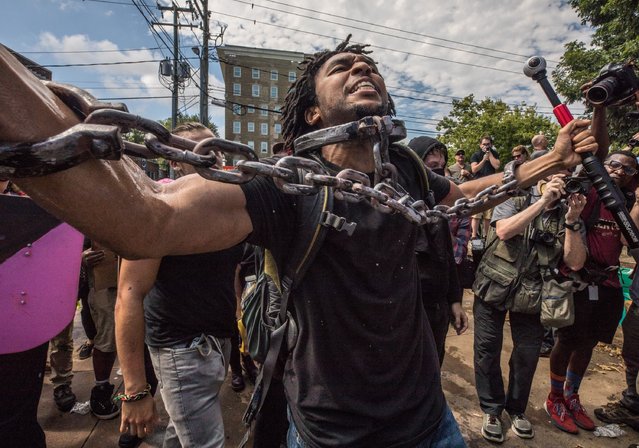 A Black Lives Matter counterprotester shouts during the Unite the Right rally in Charlottesville, Va. on August 12, 2017. (Photo by Evelyn Hockstein/The Washington Post) 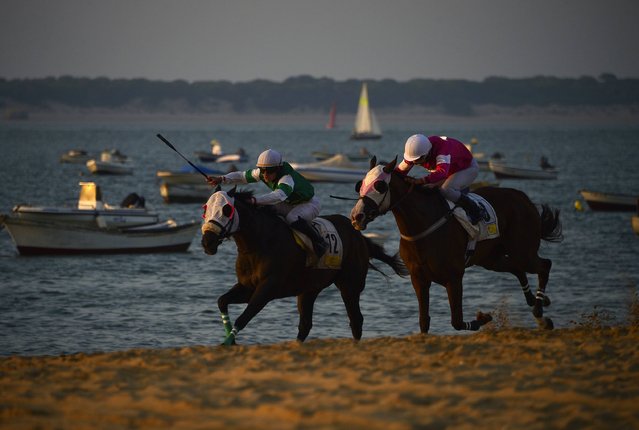 Jockeys race along the beach during the annual beach horse race at Sanlucar de Barrameda, near Cadiz, on August 17, 2017. (Photo by Cristina Quicler/AFP Photo) 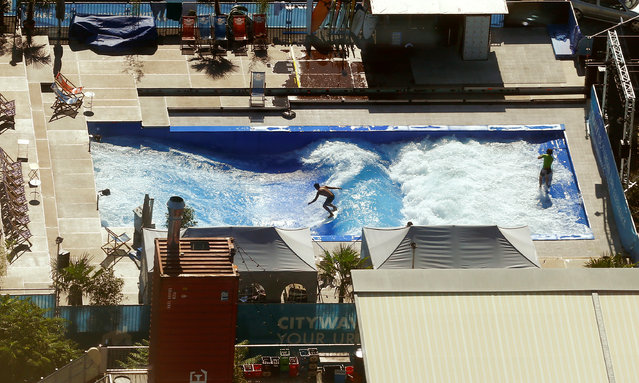 A man surfs on an artificial wave at the Citywave pool during sunny weather in Zurich, Switzerland August 18, 2017. (Photo by Arnd Wiegmann/Reuters) 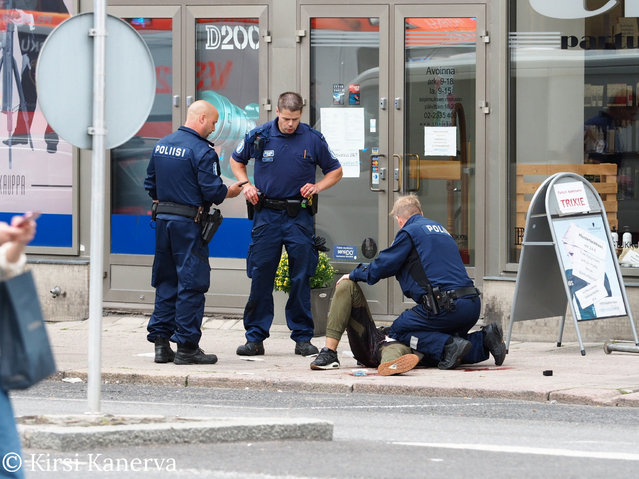 The suspect lies on the ground surrounded by police officers at the Market Square where several people were stabbed, in Turku, Finland August 18, 2017. (Photo by Courtesy Kirsi Kanerva/Reuters) 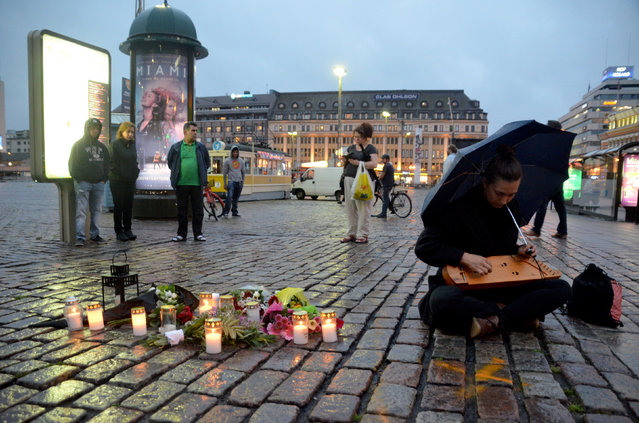 A woman plays a traditional Finnish string instrument, kantele, at the Market Square where several people were stabbed, in Turku, Finland August 18, 2017. (Photo by Tuomas Forsell/Reuters) 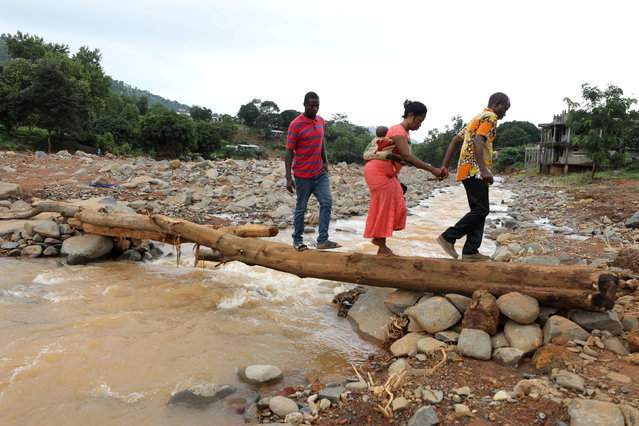 A man helps a woman cross a log bridge after the flash flood washed away a concrete bridge at Pentagon, in Freetown August 18, 2017. (Photo by Afolabi Sotunde/Reuters) 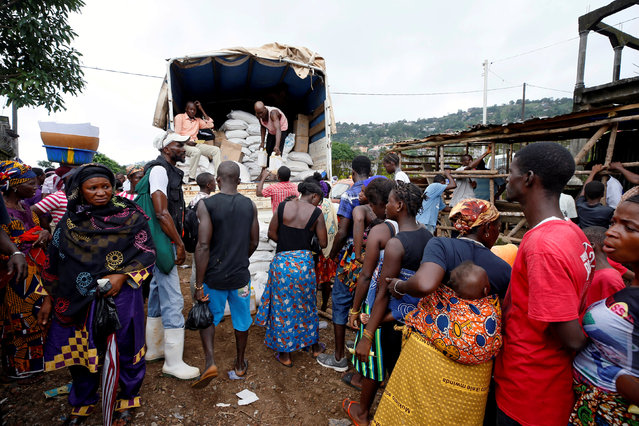 Displaced victims of a flash flood, which came after the mudslide, are seen sharing vegetable oil at a World Food distribution program, at Pentagon, in Freetown, Sierra Leone, August 18, 2017. (Photo by Afolabi Sotunde/Reuters) 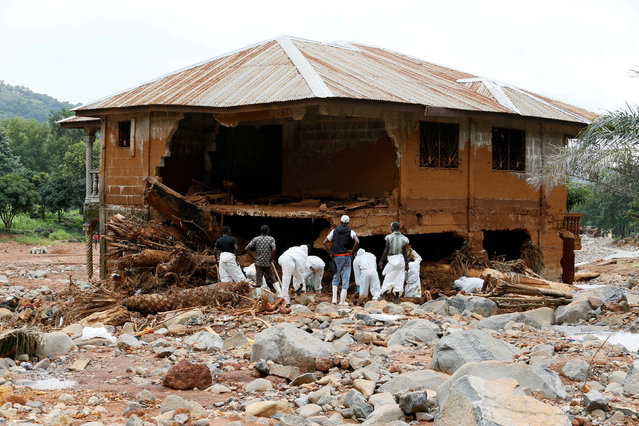 Rescue workers are seen searching through rubbles around a house for bodies at Pentagon, in Freetown, Sierra Leone August 18, 2017. (Photo by Afolabi Sotunde/Reuters) 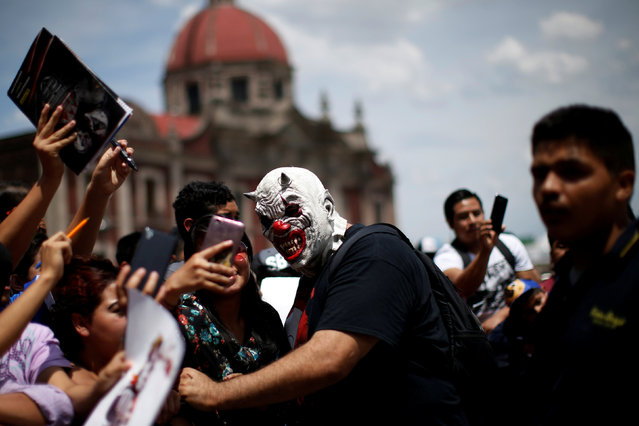 A Mexican wrestler known as Murder Clown sign autographs during the annual lucha libre pilgrimage to the Basilica of Our Lady Guadalupe in Mexico City, Mexico August 17, 2017. (Photo by Carlos Jasso/Reuters) Bulgarian couple Veselin and Spasiyana Paunovski react after a traditional bread breaking, during their wedding ceremony, in front of a waterfall in the river Tara, before a rafting tour in Scepan Polje, Bosnia and Herzegovina August 18, 2017. (Photo by Dado Ruvic/Reuters) 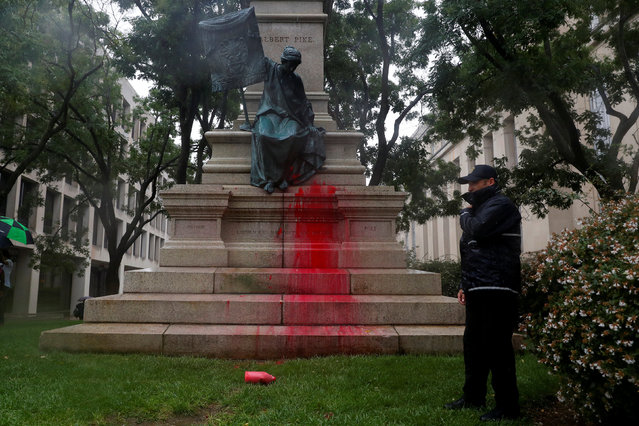 Red paint is seen splattered on the base of a statue of Confederate General Albert Pike during a demonstration calling for its removal in Washington, U.S., August 18, 2017. (Photo by Aaron P. Bernstein/Reuters) 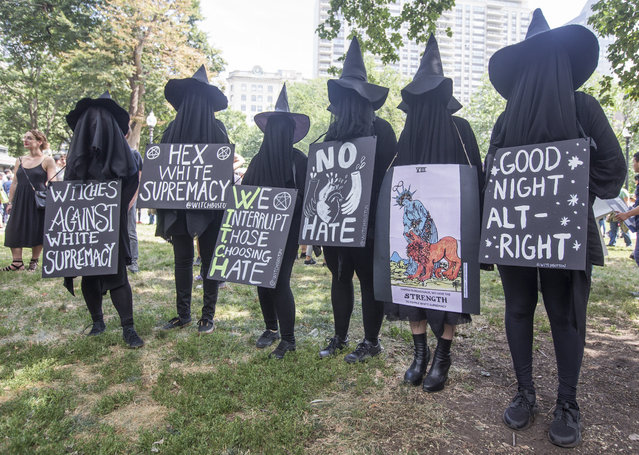 Counter protesters in witch costumes hold up signs after a march to the “Free Speech Rally” on Boston Common on August 19, 2017 in Boston, Massachusetts. Thousands of demonstrators and counter-protestors are expected at Boston Common where the Boston Free Speech Rally is being held. (Photo by Scott Eisen/Getty Images) 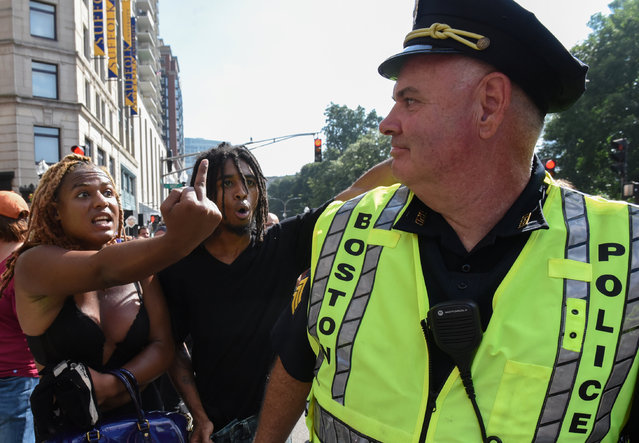 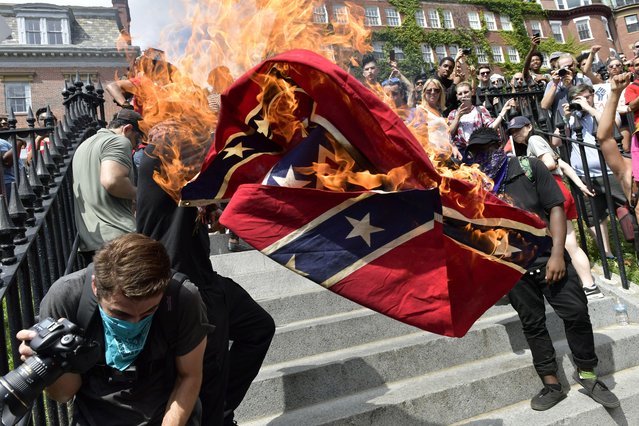