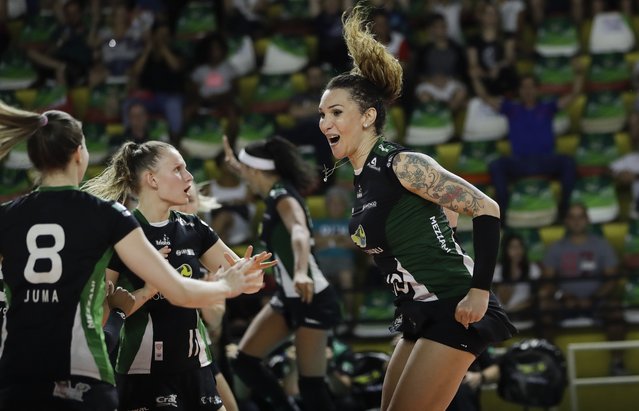 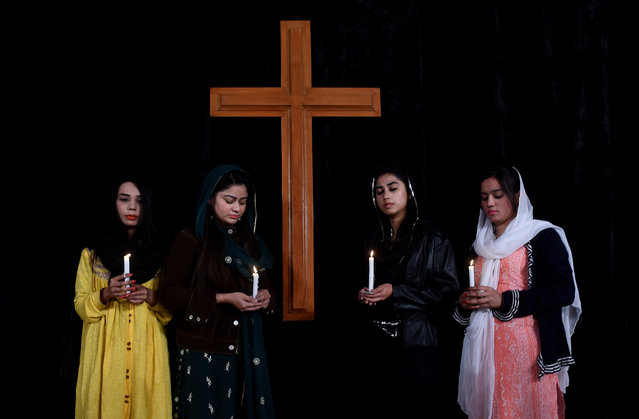 Pakistani well-wishers pray for the victims of a suicide attack on a church, in Lahore on December 20, 2017. A suicide bomb attack on a Pakistan church claimed by the Islamic State group killed at least eight people and wounded 30 during a service on December 17, just over a week before Christmas. (Photo by Arif Ali/AFP Photo) 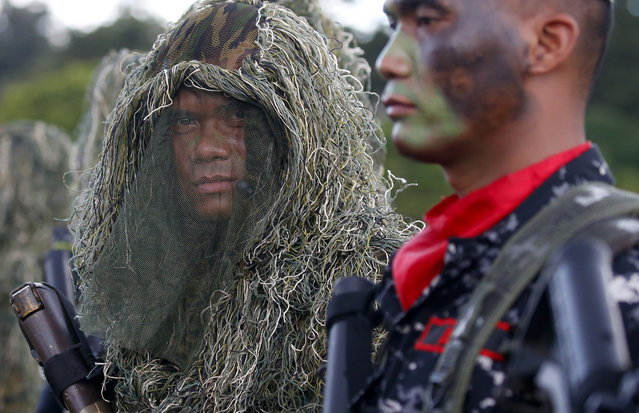 Philippine troops stand at attention during the 82nd anniversary celebration of the Armed Forces of the Philippines in suburban Quezon city northeast of Manila, Philippines Wednesday, December 20, 2017. President Rodrigo Duterte has declared a Christmas truce with communist guerrillas and urged them to reciprocate the goodwill gesture after recently scrapping peace talks with the insurgents and declaring them terrorists. (Photo by Bullit Marquez/AP Photo) 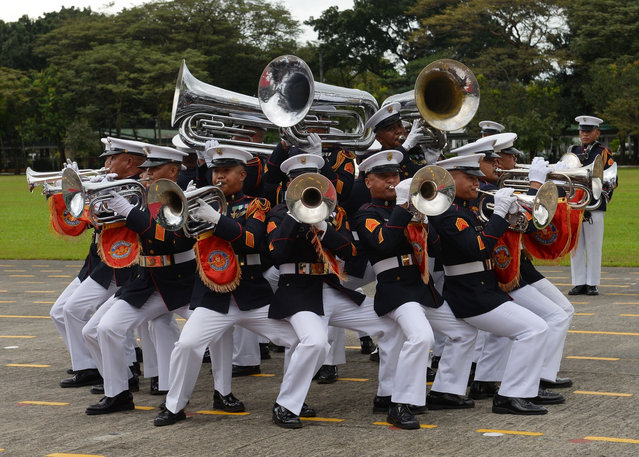 Members of the Philippines' military brass band perform during a ceremony marking the anniversary of the military at Camp Aguinaldo in Quezon City, suburban Manila on December 20, 2017, attended by President Rodrigo Duterte. President Duterte has ordered the military to suspend operations against communist rebels over Christmas, the government said December 20, despite ending peace talks and branding the insurgents “terrorists”. (Photo by Ted Aljibe/AFP Photo) 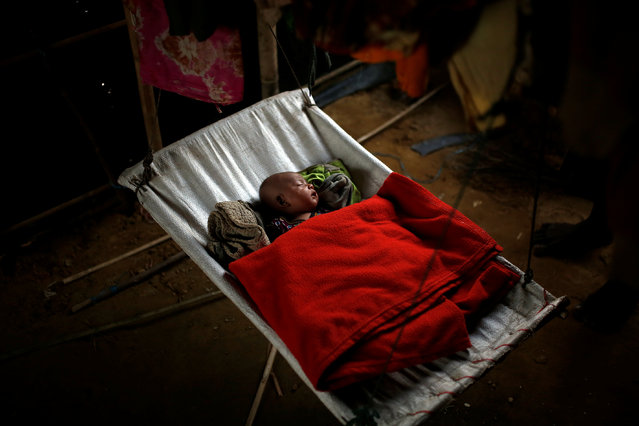 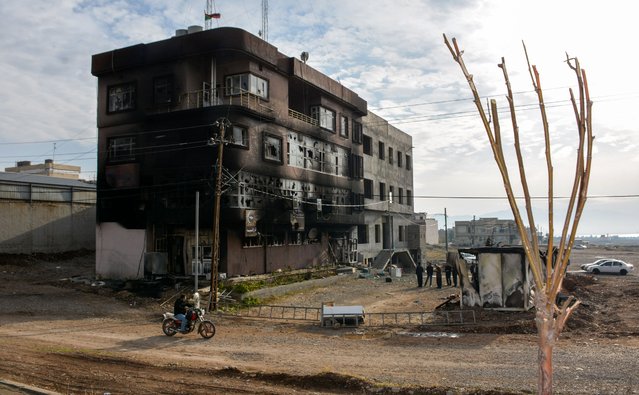 A picture taken on December 20, 2017 shows the burnt premises of the Kurdistan Islamic Union party, in the city of Raniya, 130 kilometres north of Sulaymaniyah in the autonomous Iraqi Kurdistan region, as protests against political corruption raged for a third day despite a clampdown by security forces after five people were killed. Protesters have unleashed their fury at all five of the autonomous Kurdish region's main political parties, not just the Kurdistan Democratic Party (KDP) of former regional president Massud Barzani who organised the fateful poll for independence in September 2017 which drew sweeping reprisals from Baghdad and dealt a heavy blow to the region's already flagging economy. (Photo by Shwan Mohammed/AFP Photo) 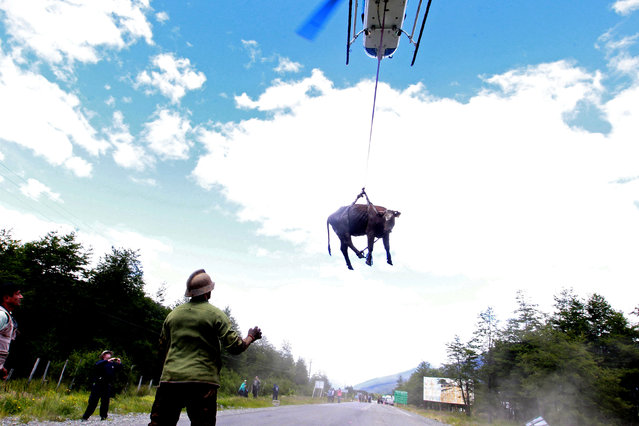 A cow is transported by a helicopter after a mudslide in Villa Santa Lucia, Chile, December 18, 2017. (Photo by Alvaro Vidal/Reuters) 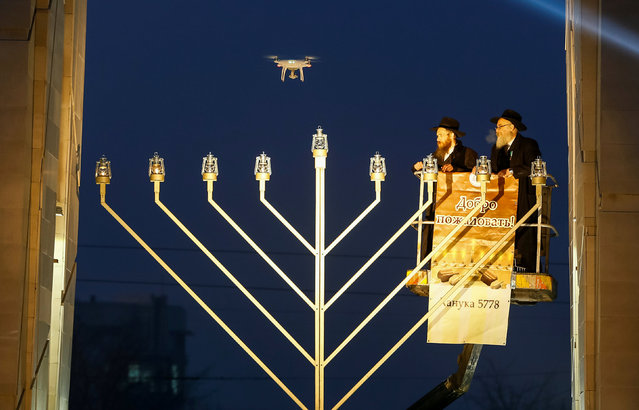 Kazakhstan's chief Rabbi Eshaya Cohen and Almaty chief Rabbi Ilchanan Cohen are lifted on a hoist to light the eighth candle during a celebration of the Jewish holiday of Hanukkah in the centre of Almaty, Kazakhstan December 19, 2017. (Photo by Shamil Zhumatov/Reuters) 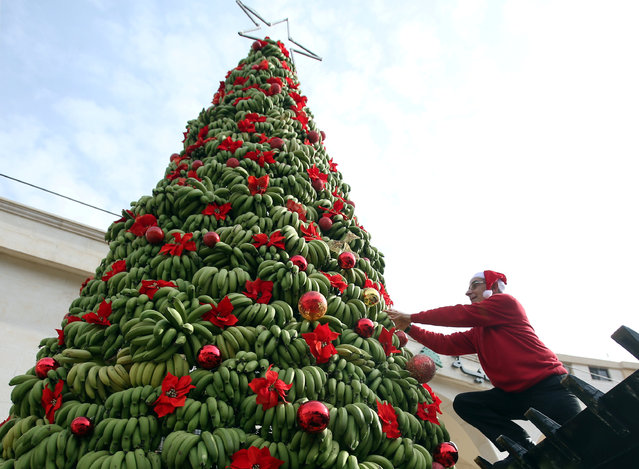 A man decorates a Christmas tree made of bananas in Damour area, south of Beirut, Lebanon, December 19, 2017. (Photo by Ali Hashisho/Reuters) 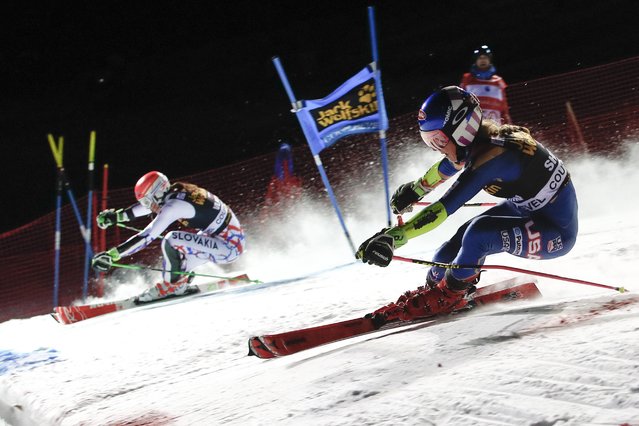 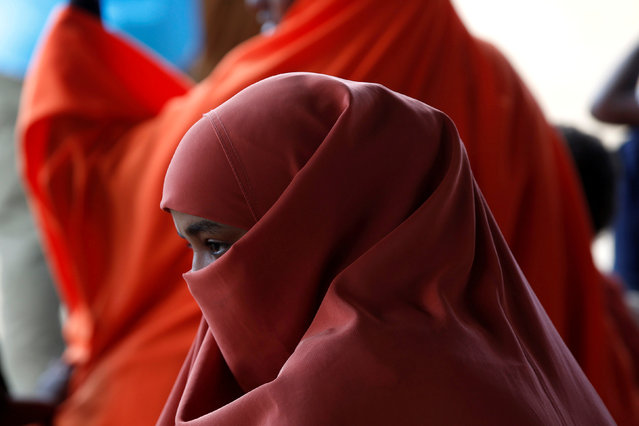 A Somali refugee waits to board a UN plane bound for Somalia, part of the UN's Voluntary Repatriation programme, in the Dadaab refugee camp, Kenya December 19, 2017. (Photo by Baz Ratner/Reuters) 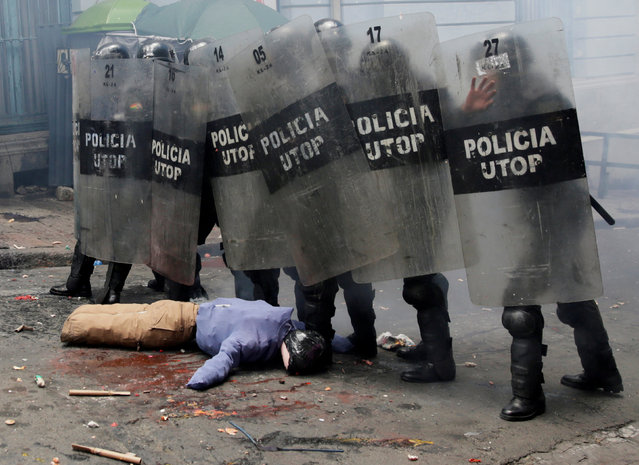 Riot policemen stand next to a figure during clashes with healthcare employees and students who refuse new government policies about health system in La Paz, Bolivia, December 19, 2017. (Photo by David Mercado/Reuters) 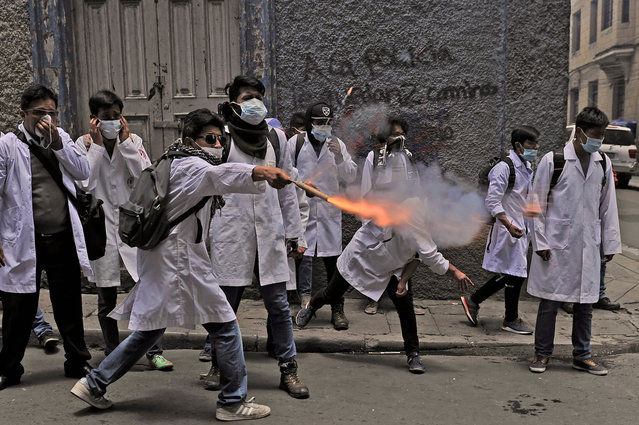 Medicine students clash with riot police officers, during a protest against President Morales new law, that proposes penal sanctions to medical malpractice, near Murilo square in La Paz, on December 19, 2017. Doctors in Bolivia went on hunger strike on Monday, in addition to renouncing to hierarchical positions in public hospitals to protest against President Evo Morales new law which penalizes medical malpractice. (Photo by Jorge Bernal/AFP Photo) 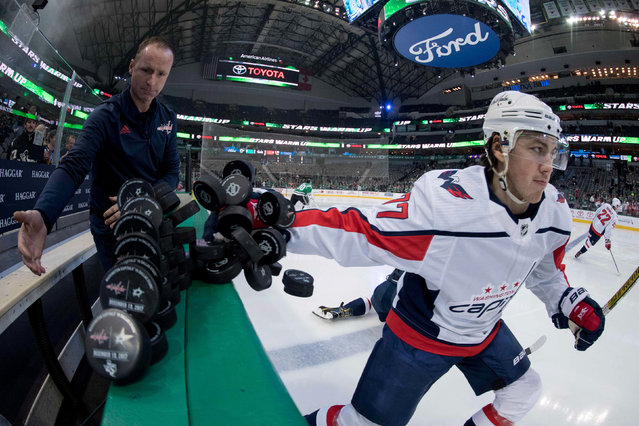 Washington Capitals right wing T.J. Oshie (77) scoops the pucks on to the ice before the game against the Dallas Stars at the American Airlines Center in Dallas, TX, USA on December 19, 2017. (Photo by Jerome Miron/USA TODAY Sports) 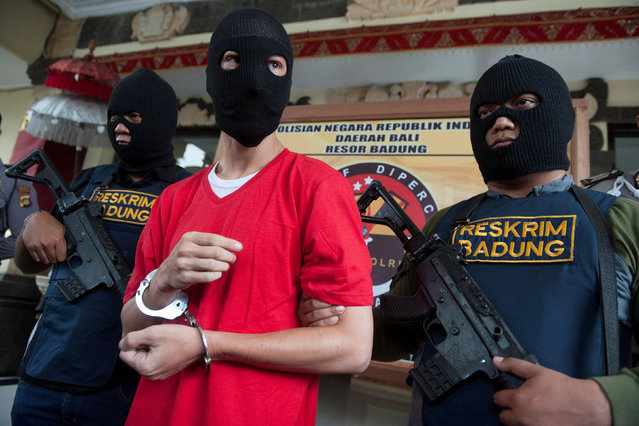 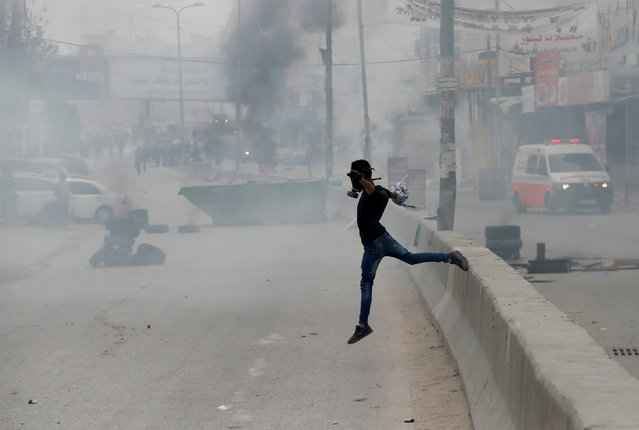 A protester jumps over a wall during a protest against U.S. President Donald Trump's decision to recognize Jerusalem as the capital of Israel, near Qalandia checkpoint near the West Bank city of Ramallah, December 20, 2017. (Photo by Goran Tomasevic/Reuters) 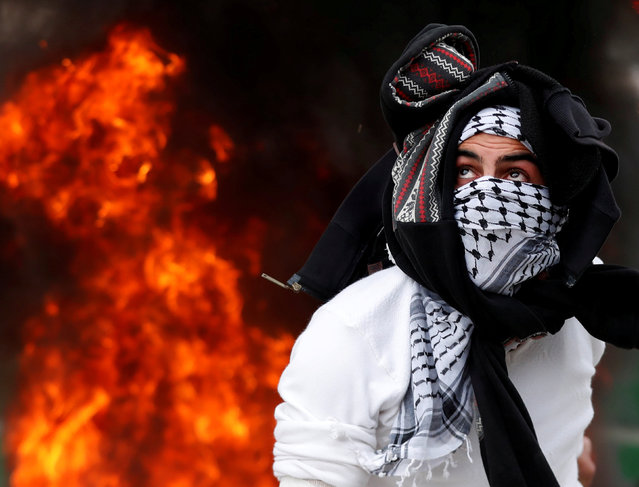 A Palestinian protester throws a stone at Israeli forces during protest against U.S. President Donald Trump's decision to recognize Jerusalem as the capital of Israel, near Qalandia checkpoint near the West Bank city of Ramallah, December 20, 2017. (Photo by Goran Tomasevic/Reuters) 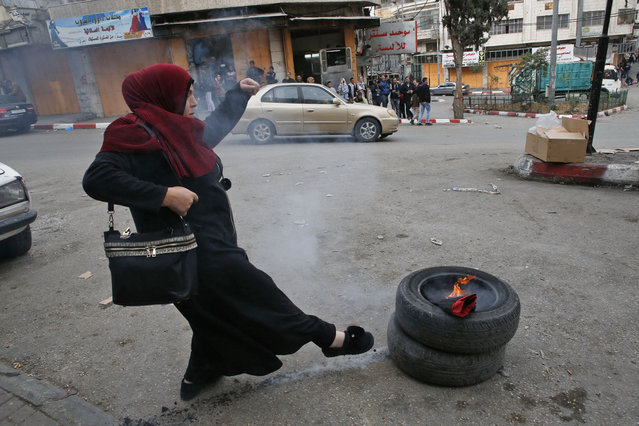 A Palestinian demonstrator kicks tyres during clashes with Israeli security forces near a checkpoint in the city centre of the West Bank town of Hebron on December 20, 2017. (Photo by Hazem Bader/AFP Photo) 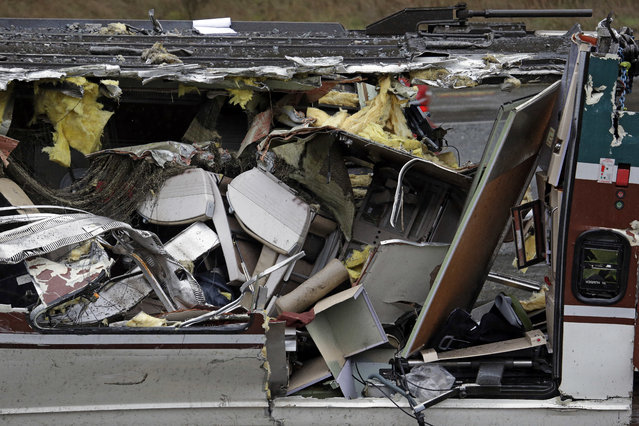 Seats are jammed together with other debris on an upside-down Amtrak train car sitting on a flat bed trailer taken from the scene of Monday's deadly crash onto Interstate 5 Tuesday, December 19, 2017, in DuPont, Wash. The Amtrak train that plunged off an overpass south of Seattle was hurtling 50 mph over the speed limit when it jumped the track, federal investigators said. (Photo by Elaine Thompson/AP Photo) 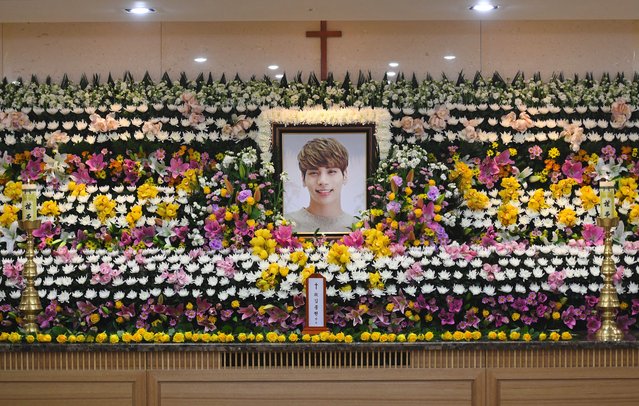 The portrait of Kim Jong-Hyun, a 27-year-old lead singer of the massively popular K-pop boyband SHINee, is seen on a mourning altar at a hospital in Seoul on December 19, 2017. The top K-pop star bemoaned feeling “broken from inside” and “engulfed” by depression in a suicide note, it emerged on December 19, as his death sent shockwaves across K-pop fans worldwide. (Photo by Choi Hyuk/AFP Photo) 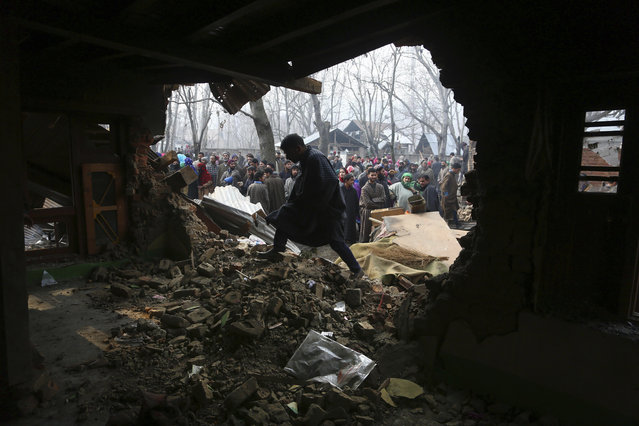 A Kashmiri villager walks across the house which was damaged during a gun-battle at Shopian 55 kilometres (34 miles) south of Srinagar, Indian controlled Kashmir Tuesday, December 19, 2017. Police say a woman was killed during anti-India protests in disputed Kashmir following a gun battle that killed two rebels. Fighting erupted after Indian troops cordoned off a village in the southern Shopian area overnight on a tip that militants were hiding in a house. (Photo by Mukhtar Khan/AP Photo) 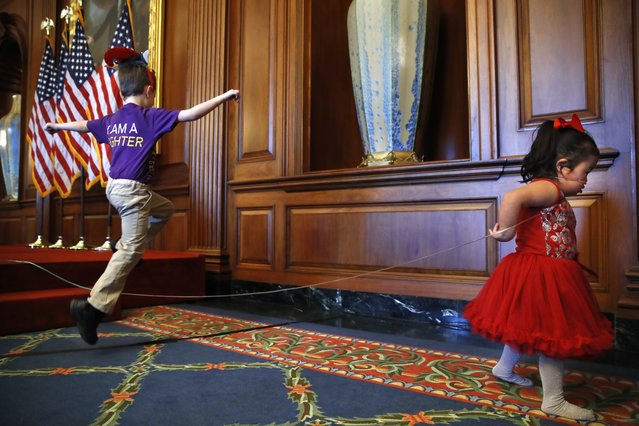 Jack Nelson, 6, of Manassas, Va., left, who has cystic fibrosis, leaps over the oxygen tubing of Melanie Carrigg, 5, who has Down syndrome, is deaf, and has Glycogen Storage Disease, before a news conference with House Minority Leader Nancy Pelosi of Calif., in opposition to the Republican tax bill, Tuesday, December 19, 2017, on Capitol Hill in Washington. Jack's parents depend on the orphan drug tax credit and are concerned about it's reduction in the Republican plan. (Photo by Jacquelyn Martin/AP Photo) 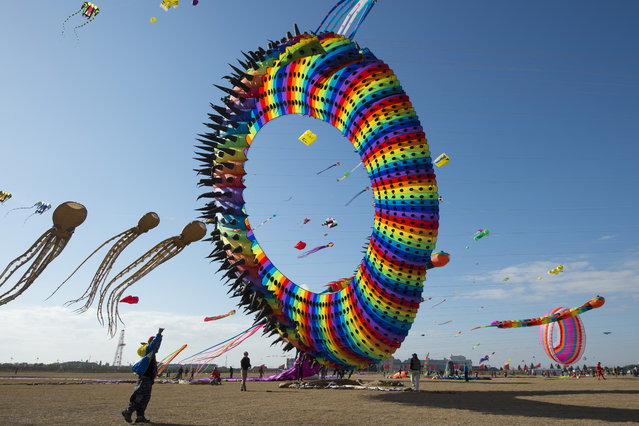