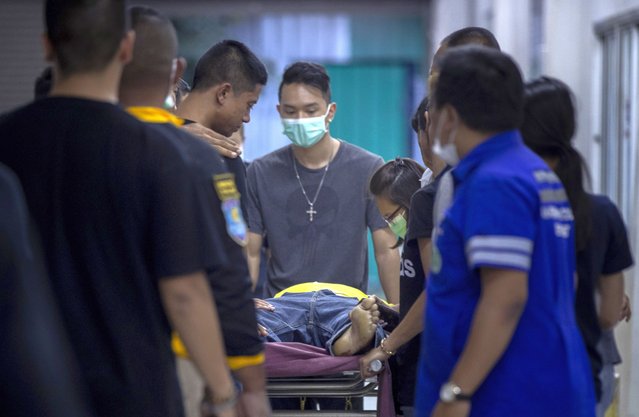 Family members visit their relative, a victim of the mass shooting, at a morgue, in Korat, Nakhon Ratchasima, Thailand, Sunday, February 9, 2020. Thai officials say a soldier who went on a shooting rampage and killed numerous people and injured dozens of others has been shot dead inside the mall in northeastern Thailand. (Photo by Gemunu Amarasinghe/AP Photo) 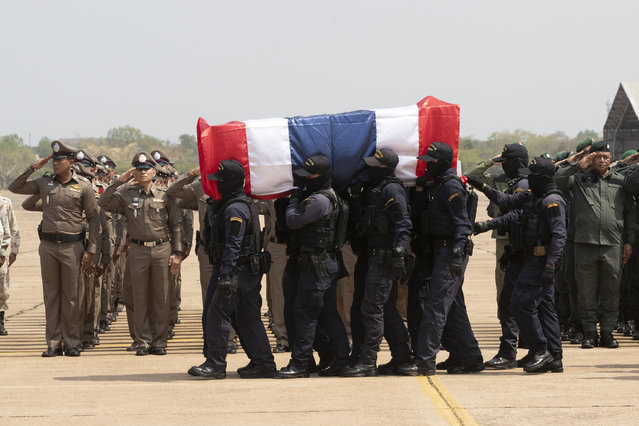 Members of the Thai special forces carry the coffin a fellow officer killed in a mass shooting, at a military airport in Nakhon Ratchasima, Thailand, Monday, February 10, 2020. (Photo by Sakchai Lalit/AP Photo) 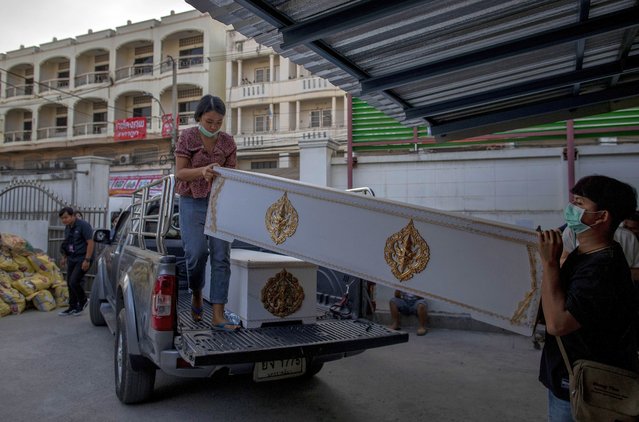 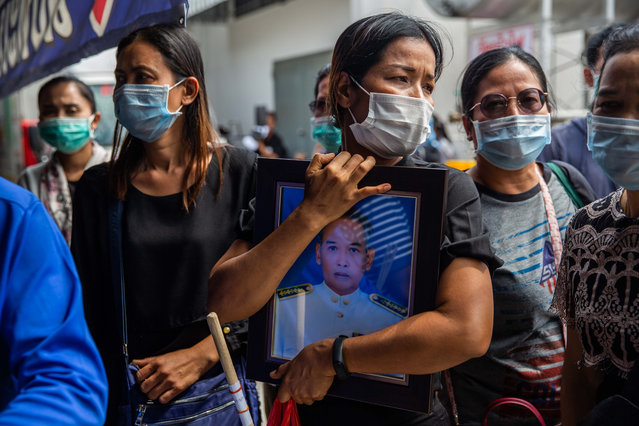 Thai families mourn the death of a family member who was among the victims of a mass shooting at Terminal 21 Mall on February 10, 2020 in Korat, Thailand. On Saturday, Thai Sgt. Maj. Jakrapanth Thomma killed his commanding officer and another soldier before stealing weapons at a military camp and heading to the Terminal 21 shopping centre in Korat, near Bangkok. He then killed 26 people and wounded 57 others in a 16-hour shooting rampage, before being shot dead by security forces. (Photo by Lauren DeCicca/Getty Images) 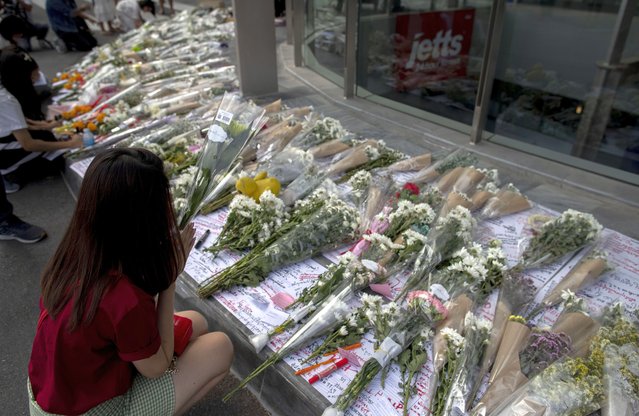 People leave flowers for the dead and injured at the scene of a deadly mass shooting outside the Terminal 21 shopping mall Monday, February 10, 2020, in Korat, Nakhon Ratchasima, Thailand. (Photo by Gemunu Amarasinghe/AP Photo) 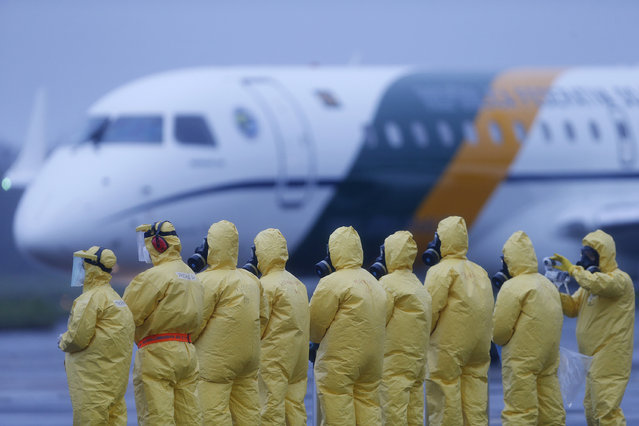 Soldiers wear protective suits during the arrival of Brazilians repatriated from Wuhan, China, the epicenter of the coronavirus, at the Annapolis Air Force Base, in Anapolis city, Goias state, Brazil, Sunday, February 9, 2020. Dozens of Brazilians landed early Sunday morning at the airbase in the Brazilian state of Goias, where they will spend the next 18 days in quarantine. (Photo by Beto Barata/AP Photo) 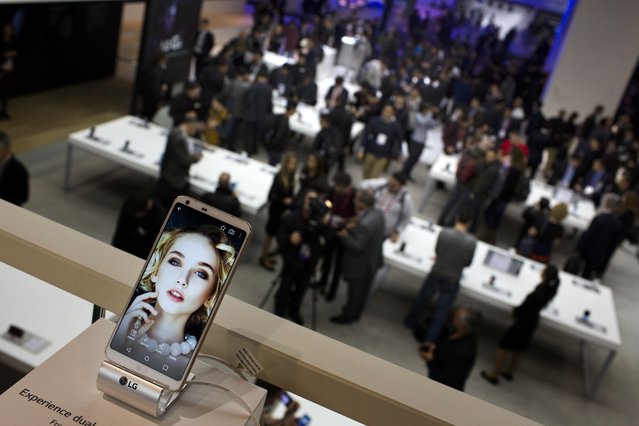 In this February 27, 2017 file photo, people crowd at the LG stand during the Mobile World Congress wireless show in Barcelona, Spain. Sony and Amazon are the latest companies to pull out of a major European technology show over virus fears.Sony said Monday it’s scrapping its appearance at Mobile World Congress, the world’s biggest mobile industry trade fair, in Barcelona, Spain later this month. (Photo by Emilio Morenatti/AP Photo/File) 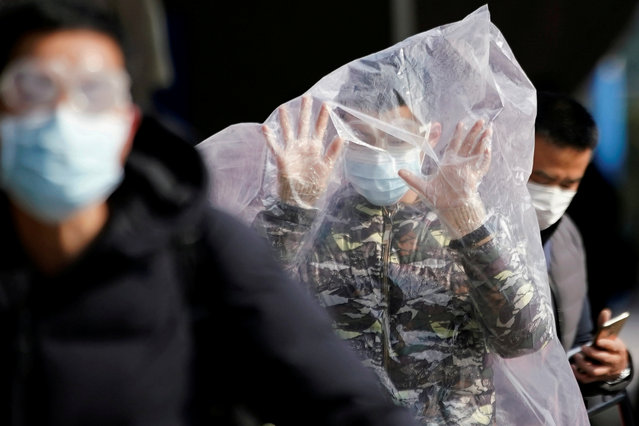 A passenger wearing a mask and covered with a plastic bag walks outside the Shanghai railway station in Shanghai, China, as the country is hit by an outbreak of a new coronavirus, February 9, 2020. (Photo by Aly Song/Reuters) 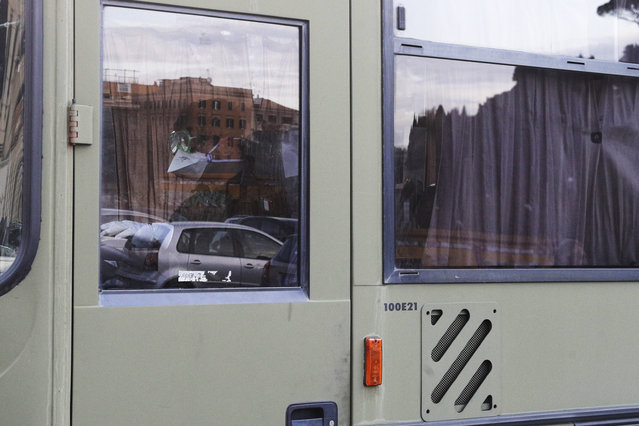 Italians evacuated from Wuhan, China, on a military bus arrive at an army complex in Rome, Sunday, February 9, 2020. The Italian foreign ministry said the eight Italians who were first flown to Britain aboard the Royal Air Force plane have arrived in Italy Sunday afternoon via an Italian air force flight. Aboard the same flight to Italy were also seven Danes, three Swedes and two Greeks. The eight Italians were transferred to an Italian military hospital in Rome for quarantine. (Photo by Gregorio Borgia/AP Photo) 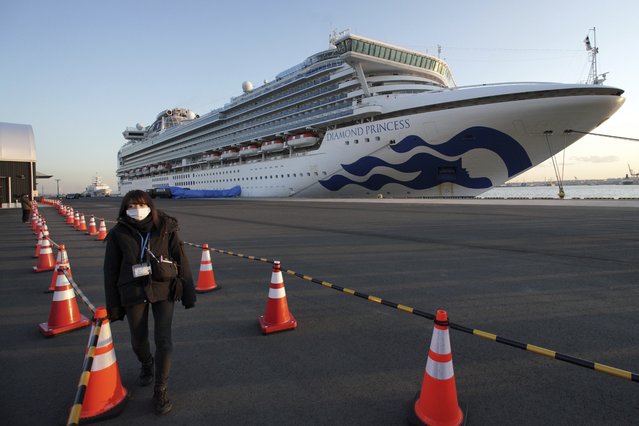 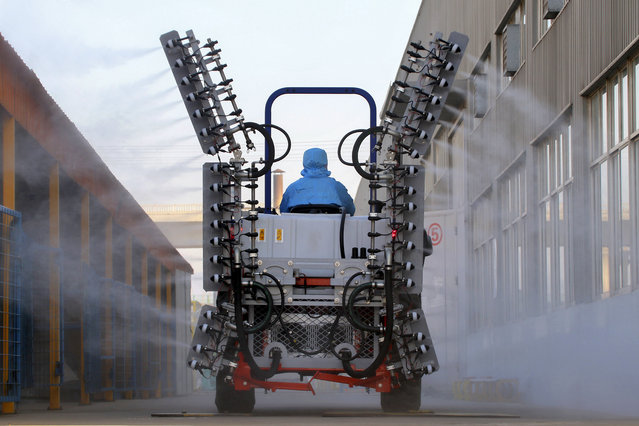 A worker in a tractor operates electrostatic spraying to disinfect the workplace following the coronavirus outbreak, in Yantai city in east China's Shandong province, Sunday, February 9, 2020. China's virus death toll rose above 800, passing the number of fatalities in the 2002-2003 SARS epidemic, but fewer new cases were reported in a possible sign its spread may be slowing as other nations step up efforts to block the disease. (Photo by Chinatopix via AP Photo) 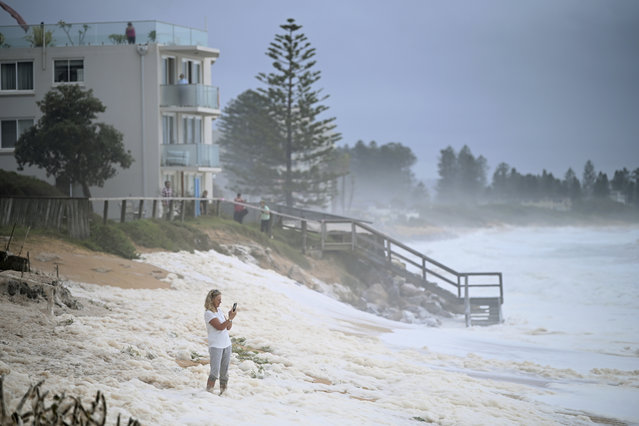 A resident inspects sea foam brought by waves approaching on beach front houses after heavy rain and storms at Collaroy in Sydney's Northern Beaches, Monday, February 10, 2020. Drought, wildfires and now flooding have given Australia's weather an almost Biblical feel this year. The good news is that a deluge in eastern parts of the country over recent days has helped dampen deadly fires and ease a crippling drought. (Photo by Joel Carrett/AAP Image via AP Photo) 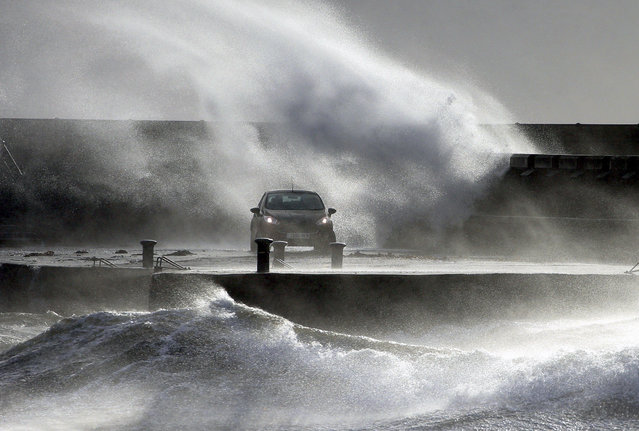 Waves lash the coast on the Ayrshire coast at Ardrossan, Scotland, Sunday, February 9, 2020. Trains, flights and ferries have been cancelled and weather warnings issued across the United Kingdom and in northern Europe as the storm with winds expected to reach hurricane levels batters the region. (Photo by Andrew Milligan/PA Wire via AP Photo) 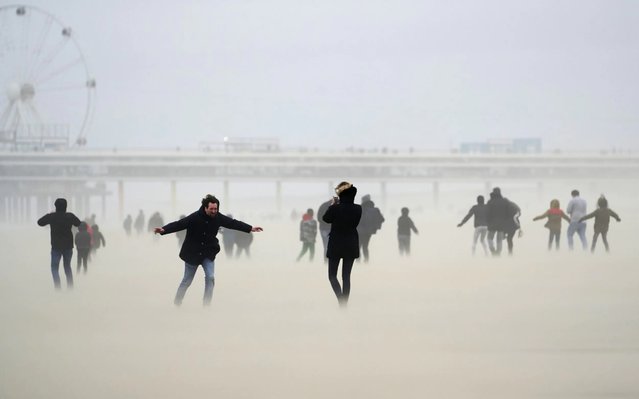 Several people came to the beach of Scheveningen to see the waves generated by the wind source by the storm Ciara on February 9, 2020 in Scheveningen, Netherlands. The storm Ciara has reached the coast of Holland with strong winds that caused trees to fall, destroying roofs of houses and disrupting trains and flights at Schiphol airport. (Photo by Nacho Calonge/Getty Images) 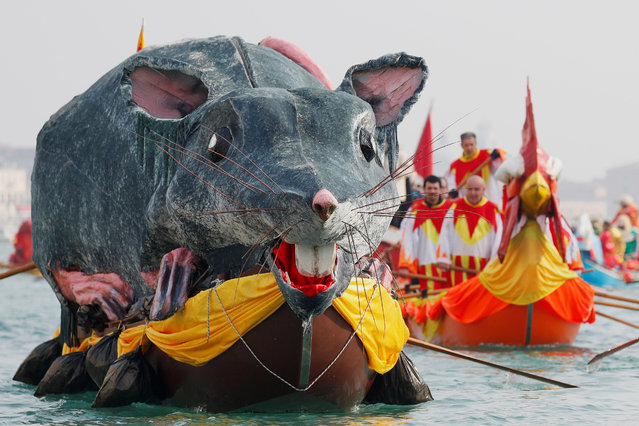 Venetians row during the masquerade parade on the Grand Canal during the Carnival in Venice, Italy, February 9, 2020. (Photo by Guglielmo Mangiapane/Reuters) 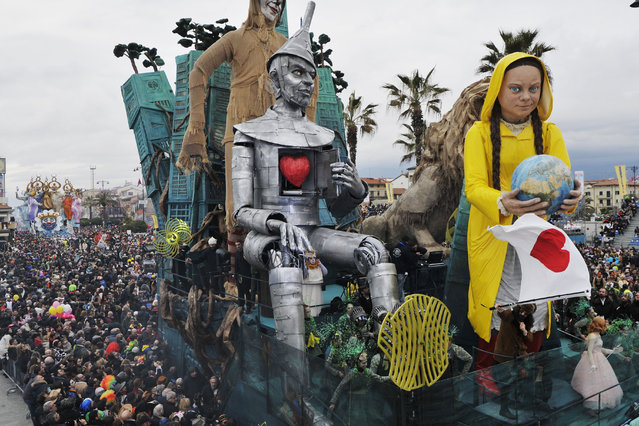 A giant papier-mache float representing the climate and environmental activist Greta Thunberg, called Home Sweet Home moves through the streets of Viareggio during the traditional Carnival of Viareggio parade on February 9, 2020 in Viareggio, Italy. The Carnival of Viareggio is considered one of the most important carnivals in Italy and is characterised by its giant papier-mache floats depicting caricatures of popular characters, politicians and fictional creations. (Photo by Laura Lezza/Getty Images) 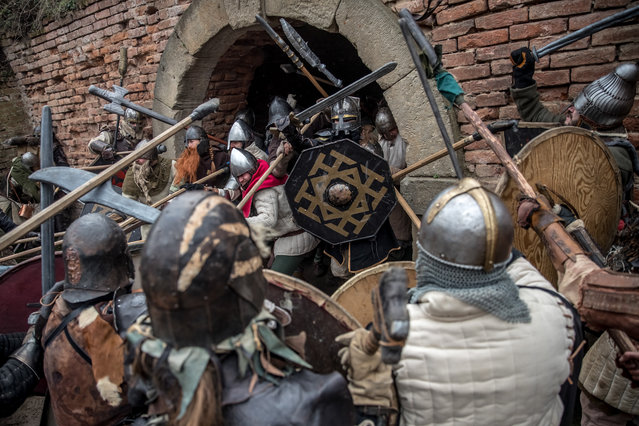 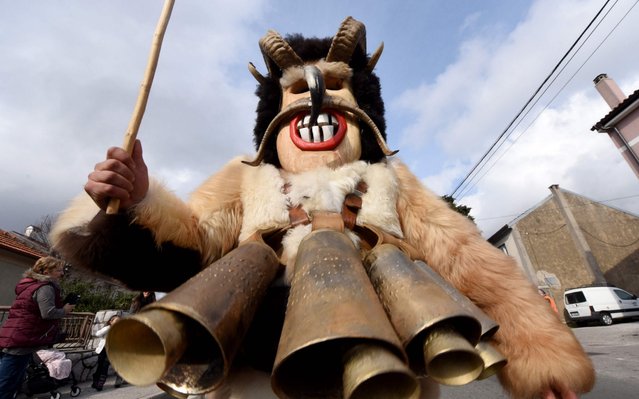 A Bulgarian bellman walks in Cavle, near Rijeka on February 9, 2020, to attend a “symphony” in which some 500 bellmen from across Europe took part. (Photo by Denis Lovrovic/AFP Photo) 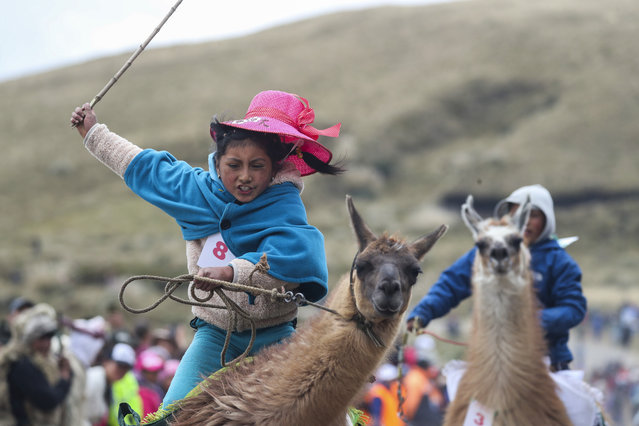 Milena Jami whips her llama to win the first place in the a race for children of ages seven and eight at the Llanganates National Park, Ecuador, Saturday, February 8, 2020. Wooly llamas, an animal emblematic of the Andean mountains in South America, become the star for a day each year when Ecuadoreans dress up their prized animals for children to ride them in 500-meter races. (Photo by Dolores Ochoa/AP Photo) 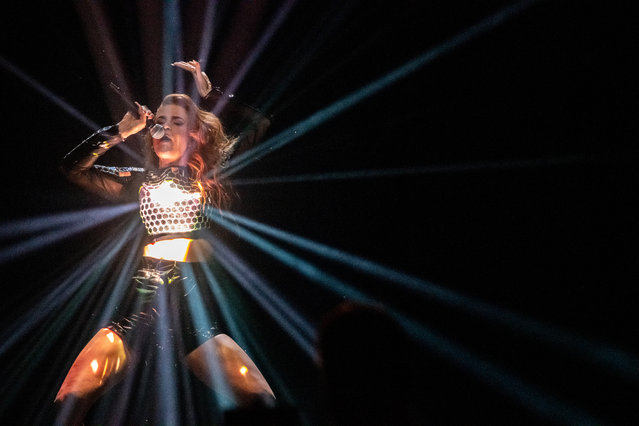