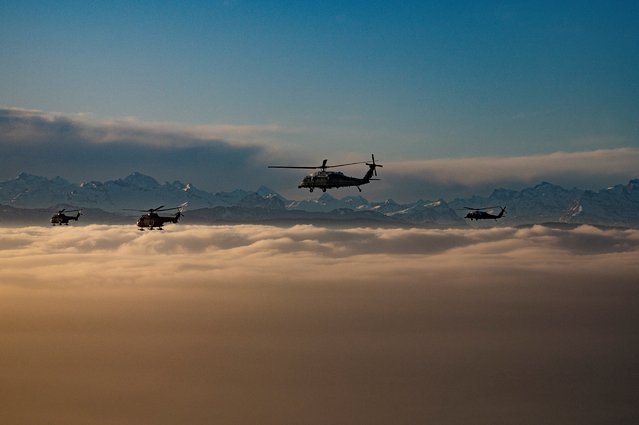 A helicopter carrying US President Donald Trump flies over the Swiss Alps on his way to Davos, Switzerland, on January 21, 2020, for the World Economic Forum. (Photo by Jim Watson/AFP Photo) 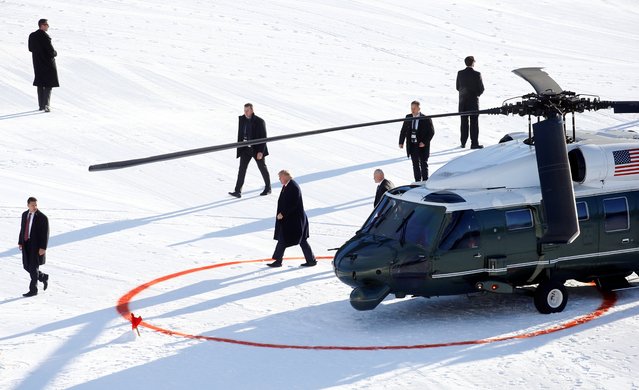 U.S. President Donald Trump walks out of the Marine One helicopter as he arrives for the 50th World Economic Forum (WEF) in Davos, Switzerland, January 21, 2020. (Photo by Arnd Wiegmann/Reuters) 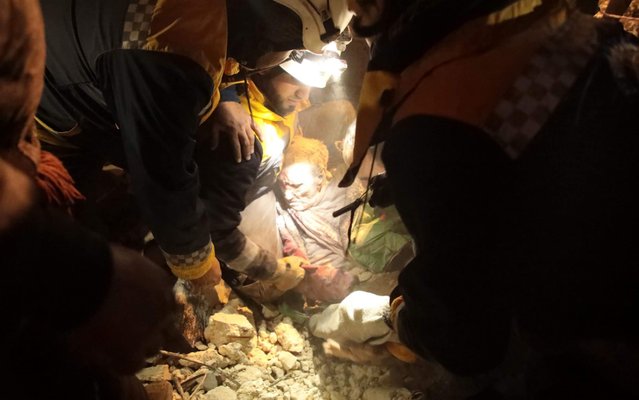 Members of the Syrian Civil Defence, also known as the White Helmets, recover a man from the rubble of a building following a reported airstrike on the village of Kafr Nuran, in the western countryside of the northern province of Aleppo, on January 21, 2020. Russian air strikes killed at least 15 civilians in northwestern Syria, as renewed violence tightened the noose around the country's last major rebel-held bastion and deepened an already dire humanitarian crisis. (Photo by Aaref Watad/AFP Photo) 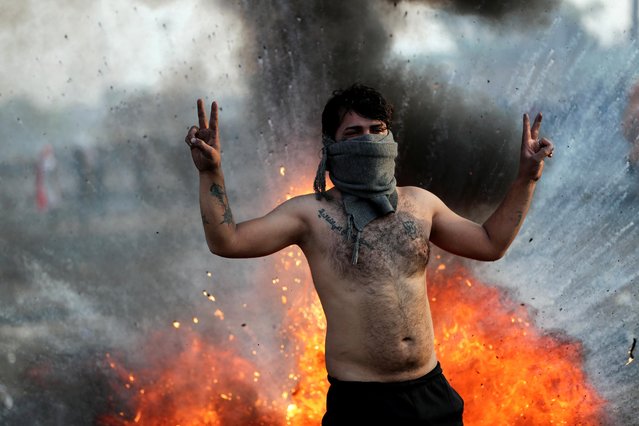 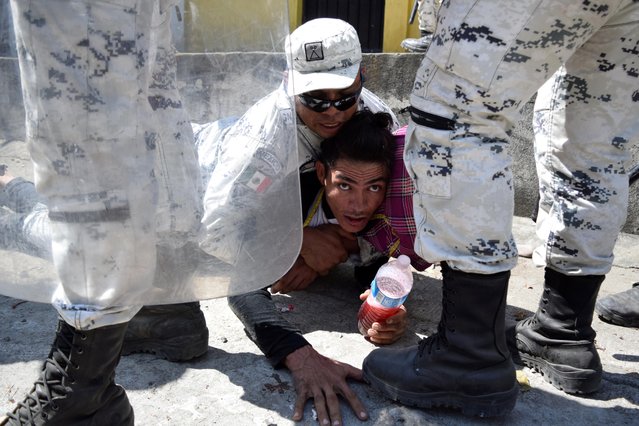 A member of Mexico's National Guard detains a migrant, part of a caravan travelling to the U.S., near the border between Guatemala and Mexico, in Ciudad Hidalgo, Mexico on January 20, 2020. (Photo by Jose Torres/Reuters) 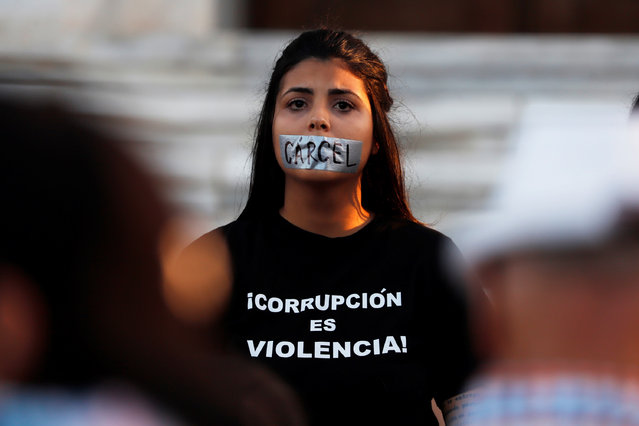 A woman protests in front of the Capitol building to demand the resignation of Puerto Rico's governor, Wanda Vazquez, for her management of the distributioin of relief supplies in the aftermath of recent earthquakes, in San Juan, Puerto Rico, 20 January 2020. (Photo by Thais Llorca/EPA/EFE) 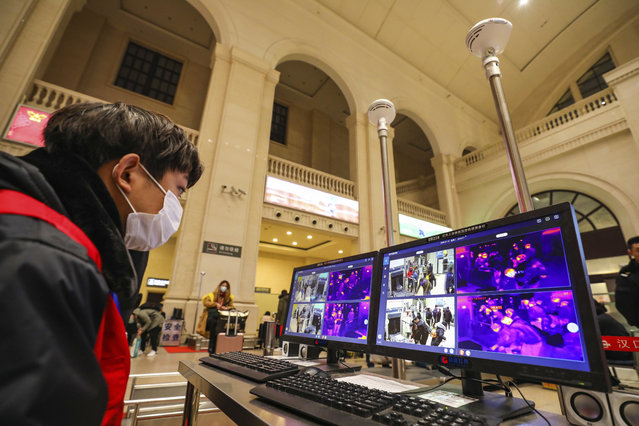 In this Tuesday, January 21, 2020, photo, a worker monitors display screens for infrared thermometers as they check travelers at Hankou Railway Station in Wuhan in southern China's Hubei province. The U.S. on Tuesday reported its first case of a new and potentially deadly virus circulating in China, saying a Washington state resident who returned last week from the outbreak's epicenter was hospitalized near Seattle. (Photo by Chinatopix via AP Photo) 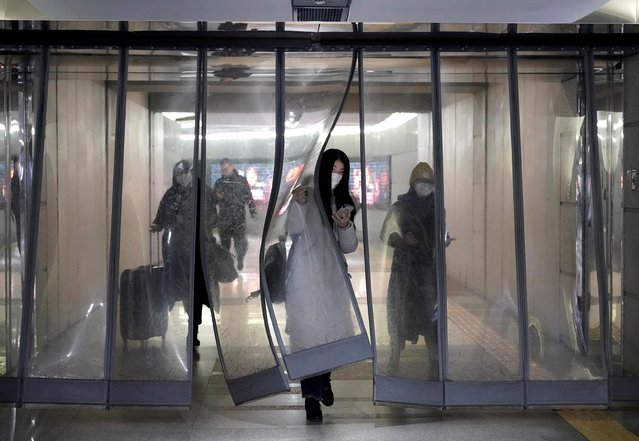 People wearing masks walk through an underground passage to the subway in Beijing, China on January 21, 2020. The death toll from a mysterious flu-like virus in China climbed to six as new cases surged beyond 300 and authorities fretted about the added risk from millions of Chinese traveling for the Lunar New Year holiday. (Photo by Jason Lee/Reuters) 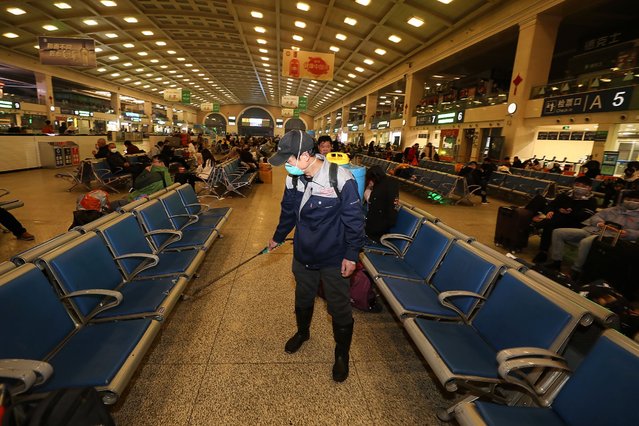 A staff member disinfects at the Hankou Railway Station in Wuhan, in China's central Hubei province early on January 22, 2020. The Chinese city at the centre of a SARS-like virus outbreak has urged people to stay away, cancelling a major Lunar New Year event, as it strives to contain a disease that has spread across the country. (Photo by AFP Photo/China Stringer Network) 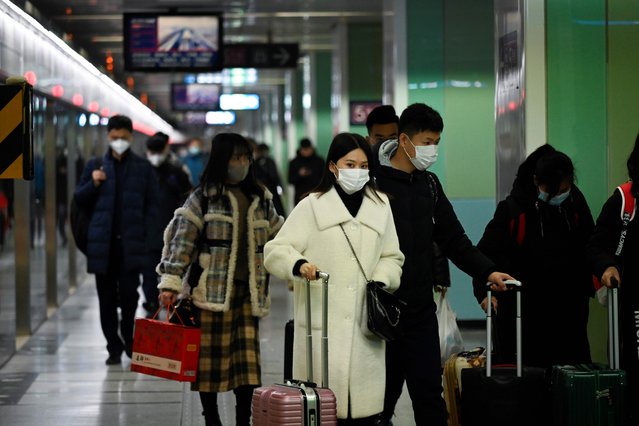 People wearing protective masks walk at a subway station in Beijing on January 22, 2020. A new virus that has killed nine people, infected hundreds and already reached the United States could mutate and spread, China warned January 22, as authorities scrambled to contain the disease during the Lunar New Year travel season. (Photo by Wang Zhao/AFP Photo) 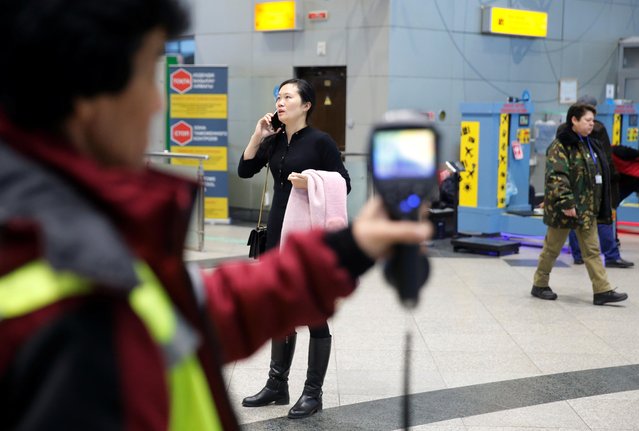 Kazakh sanitary-epidemiological service worker uses a thermal scanner to detect travellers from China who may have symptoms possibly connected with the previously unknown coronavirus, at Almaty International Airport, Kazakhstan January 21, 2020. Airports in the United States, Australia and across Asia have begun extra screening for passengers from Wuhan. (Photo by Pavel Mikheyev/Reuters) 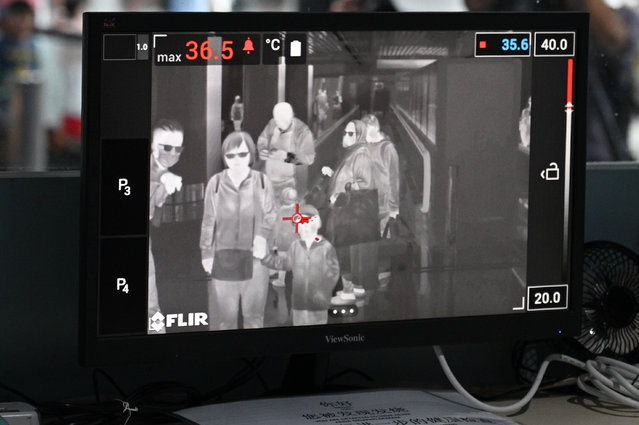 Malaysian health officer screen arriving passengers with a thermal scanner at Kuala Lumpur International Airport in Sepang on January 21, 2020 as authorities increased measure against coronavirus. China has confirmed human-to-human transmission in the outbreak of a new SARS-like virus as the number of cases soared and authorities January 21 said a fourth person had died, as the World Health Organization said it would consider declaring an international public health emergency over the outbreak. (Photo by Mohd Rasfan/AFP Photo) 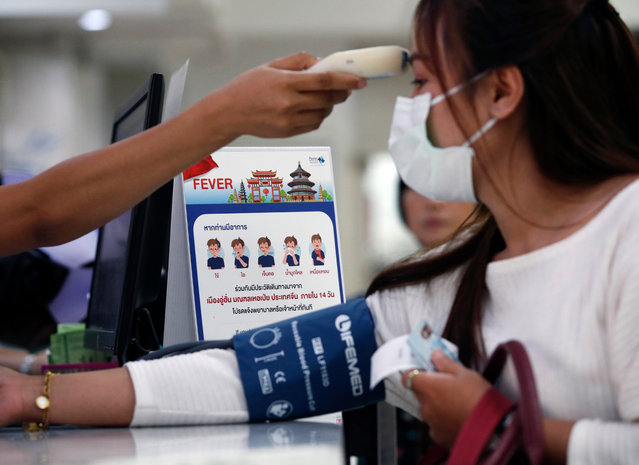 A nurse checks a patient's body temperature next to a campaign poster alerting on the coronavirus at a hospital in Bangkok, Thailand, 22 January 2020. The SARS-like coronavirus was detected in three Chinese tourists as well as a 73-year-old Thai woman who was infected after traveling to Wuhan, China. China confirmed 440 cases of Wuhan pneumonia with nine deaths, according to the National Health Commission on a press conference. The respiratory virus was first detected in Wuhan and can be passed between humans. So far it has spread to the USA, Thailand, South Korea, Japan and Taiwan. (Photo by Rungroj Yongrit/EPA/EFE) 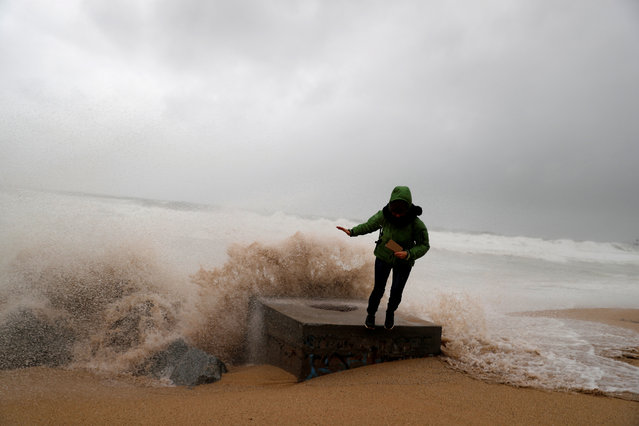 A woman is pictured during the storm “Gloria” on Maresme coast in Badalona, near Barcelona, Spain, January 21, 2020. (Photo by Nacho Doce/Reuters) 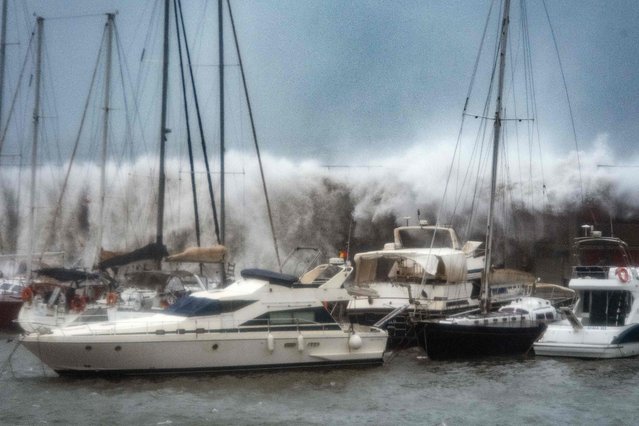 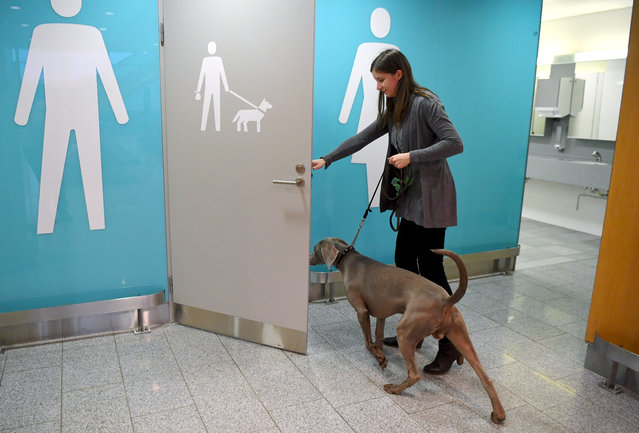 A Weimaraner called Moritz goes into a pet relief area at the Helsinki International Airpot in Vantaa, Finland on January 20, 2020. The Helsinki Airport has recently installed two pet relief areas for animals. The pet toilet has been designed with dogs in mind, but other pets are also welcome. (Photo by Jussi Nukari/Rex Features/Shutterstock) 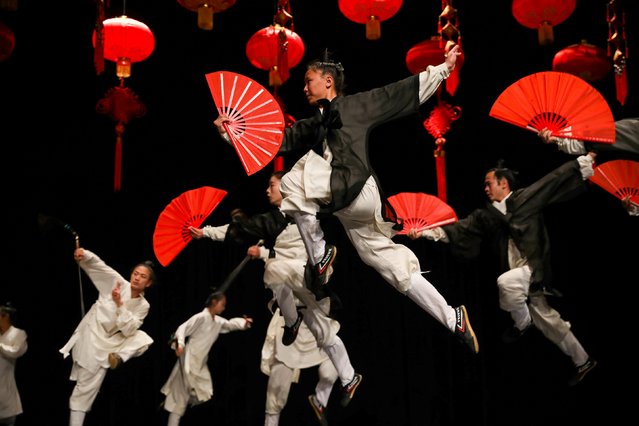 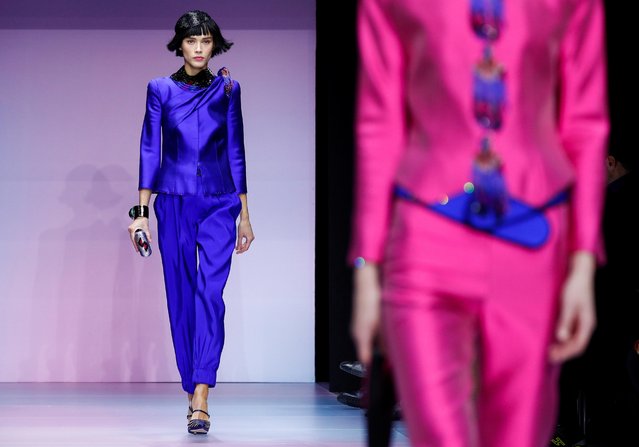 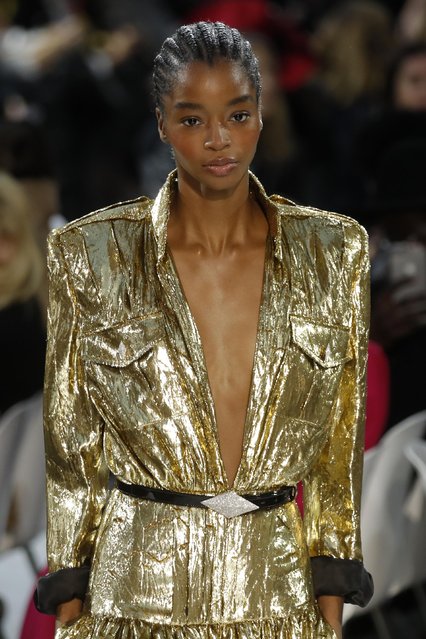 A model presents a creation by designer Alexandre Vauthier as part of his Haute Couture Spring/Summer 2020 collection show in Paris, France, January 21, 2020. (Photo by Charles Platiau/Reuters) 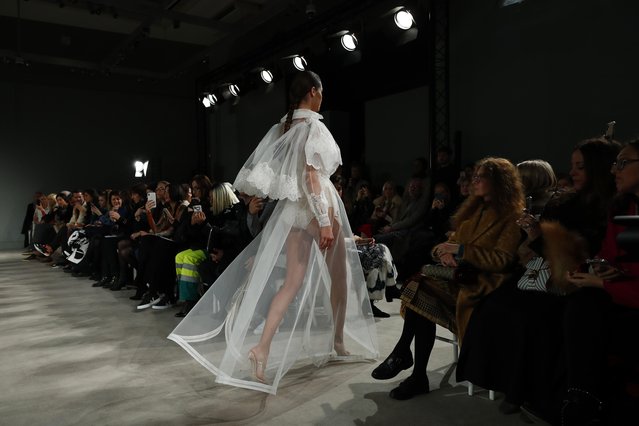