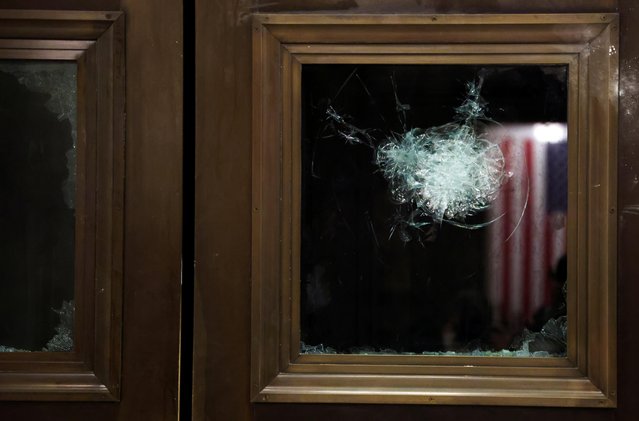 A broken window is seen during a joint session of Congress after they reconvened to certify the Electoral College votes of the 2020 presidential election in the House chamber in Washington, U.S. January 7, 2021. The House and Senate certified the Democrat's electoral college win early Thursday after a violent throng of pro-Trump rioters spent hours Wednesday running rampant through the Capitol. A woman was fatally shot, windows were bashed and the mob forced shaken lawmakers and aides to flee the building, shielded by Capitol Police. (Photo by Jonathan Ernst/Reuters) 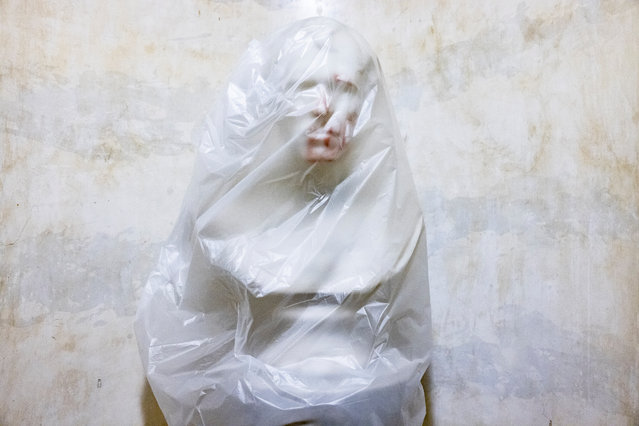 The bust of U.S. President Zachary Taylor is covered with plastic after blood was smeared on it when a pro-Trump mob broke into the U.S. Capitol building on January 7, 2021 in Washington, DC. Following a rally yesterday with President Donald Trump on the National Mall, a pro-Trump mob stormed and broke into the U.S. Capitol building causing a Joint Session of Congress to delay the certification of President-elect Joe Biden's victory over President Trump. (Photo by Samuel Corum/Getty Images) 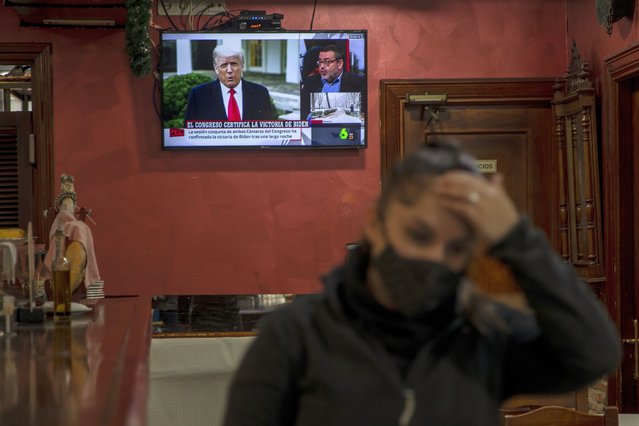 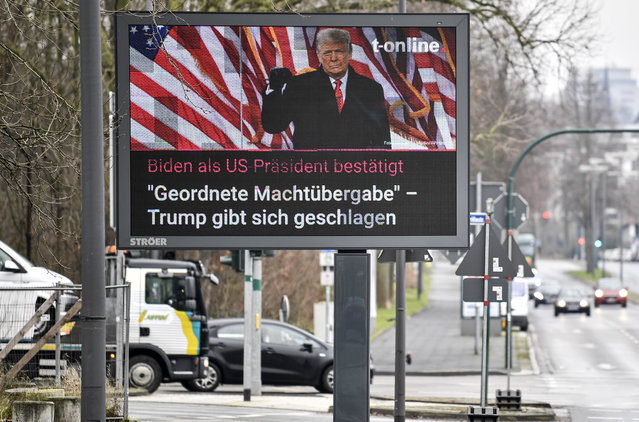 A large news screen beside a street in Essen, Germany, showing US president Donald Trump, and a headline reading “Biden as US president confirmed, orderly transfer of power – Trump declares defeat” on Thursday, January 7, 2021. (Photo by Martin Meissner/AP Photo) 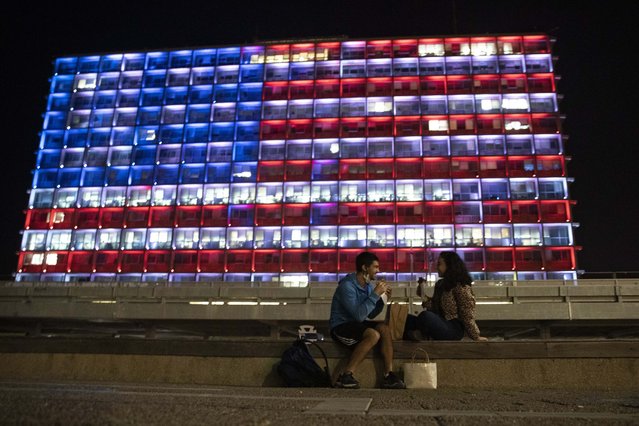 An Israeli couple sits near the Tel Aviv municipality building as it is lit up with the flag of the United States in Tel Aviv, Israel, Thursday, January 7, 2021. Officials said the display is a sign of solidarity with the United States and support for democracy. (Photo by Sebastian Scheiner/AP Photo) 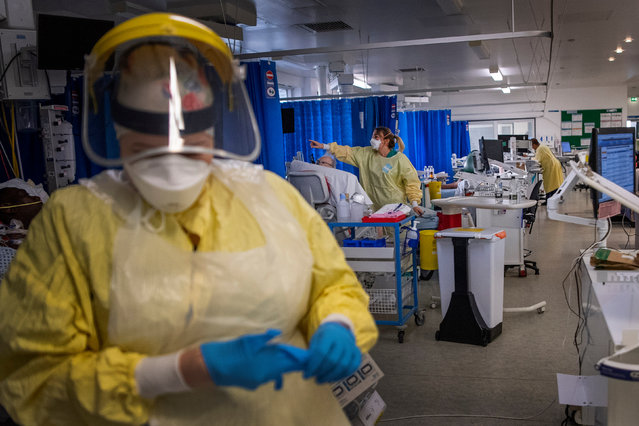 A nurse wearing PPE works on a patient in the ICU (Intensive Care Unit) in St George's Hospital in Tooting, south-west London, United Kingdom on January 7, 2021 where the number of intensive care beds for the critically sick has had to be increased from 60 to 120, the vast majority of which are for coronavirus patients. (Photo by Victoria Jones/PA Images via Getty Images) 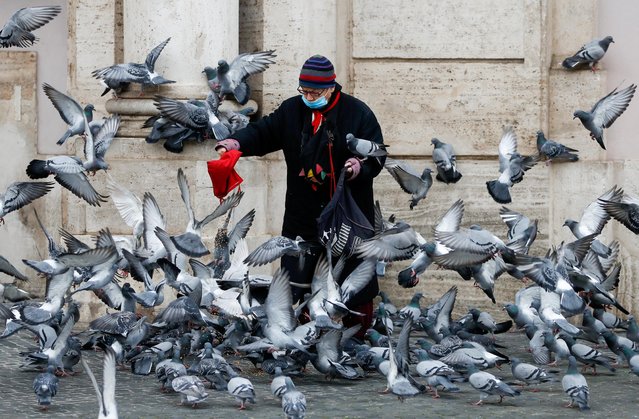 A person feeds pigeons at Piazza Navona, as the region enters the 'yellow zone' after the government relaxed some of the coronavirus disease (COVID-19) curbs on weekdays following a strict lockdown over the holidays, in Rome, Italy on January 7, 2021. (Photo by Yara Nardi/Reuters) 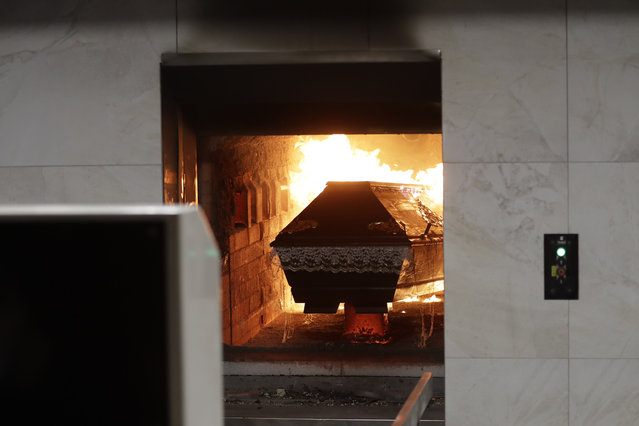 A casket is incinerated at a crematorium in Ostrava, Czech Republic, Thursday, January 7, 2021. The biggest crematorium in the Czech Republic has been overwhelmed by mounting numbers of pandemic victims. With new confirmed COVID-19 infections around record highs, the situation looks set to worsen. Authorities in the northeastern city of Ostrava have been speeding up plans to build a fourth furnace but, in the meantime, have sought help from the government’s central crisis committee for pandemic coordination. (Photo by Petr David Josek/AP Photo) 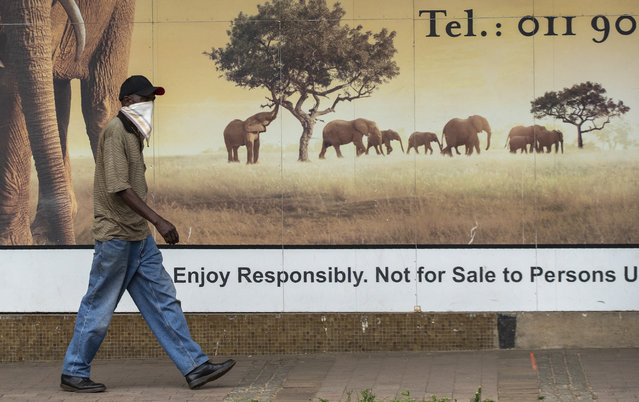 A man wearing a face covering, walks past a logo on the street in Alberton, near Johannesburg, South Africa, Thursday, January 7, 2021. South Africa says it will import 1.5 million doses of the AstraZeneca vaccine to inoculate the country's health workers. This is South Africa's first announcement of the purchase of a COVID-19 vaccine as its cases soar. (Photo by Themba Hadebe/AP Photo) 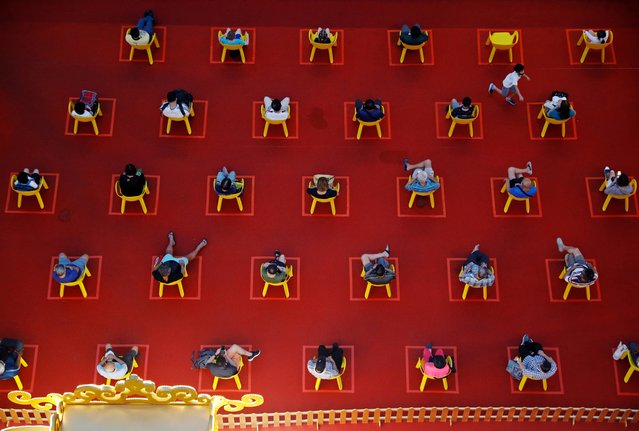 People watch an outdoor movie screening within their social distances during the coronavirus disease (COVID-19) outbreak in Singapore on January 7, 2021. (Photo by Edgar Su/Reuters) 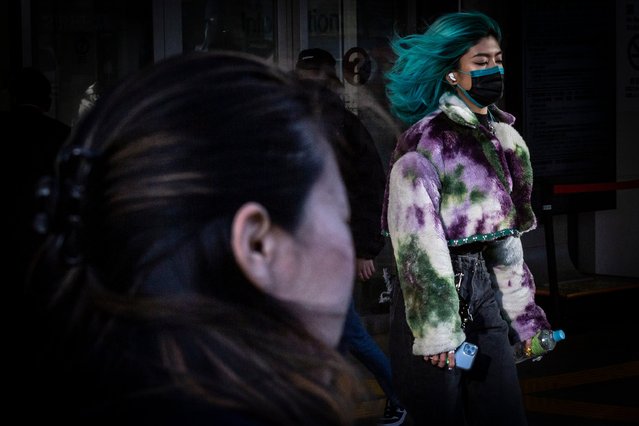 A woman wearing a face mask walk through Shinjuku area on January 07, 2021 in Tokyo, Japan. Japanese Prime Minister Yoshihide Suga is set to declare a state of emergency in Tokyo and neighboring three prefectures, Kanagawa, Saitama, and Chiba on Thursday, following the recent surge in COVID-19 cases in the region. Tokyo saw over 2000 new cases per day for the first time on January 7, 2021. (Photo by Yuichi Yamazaki/Getty Images) 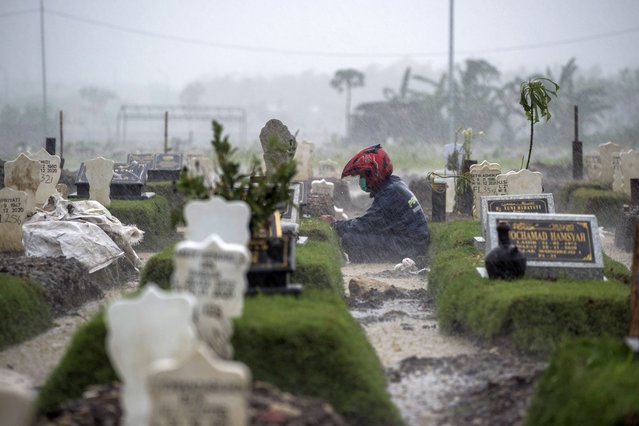 A man sits by the grave of a Covid-19 coronavirus victim amid pouring rain at Keputih cemetery in Surabaya, East Java, Indonesia on January 7, 2021. (Photo by Juni Kriswanto/AFP Photo) 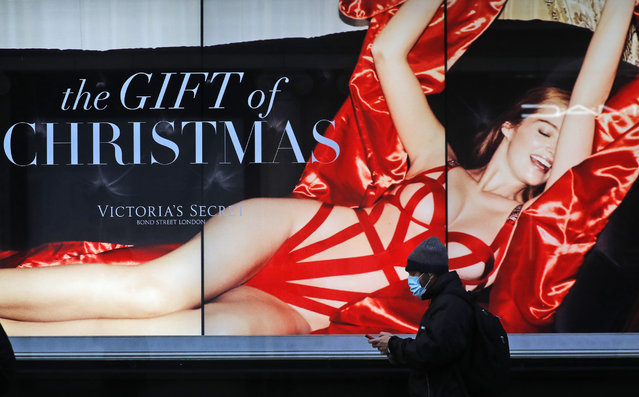 A man with face covering walks past a shop window in London, as retail shops are closed because of the coronavirus Thursday, January 7, 2021. Britain's Prime Minister Boris Johnson has ordered a new national lockdown for England which means people will only be able to leave their homes for limited reasons, with measures expected to stay in place until mid-February. (Photo by Frank Augstein/AP Photo) 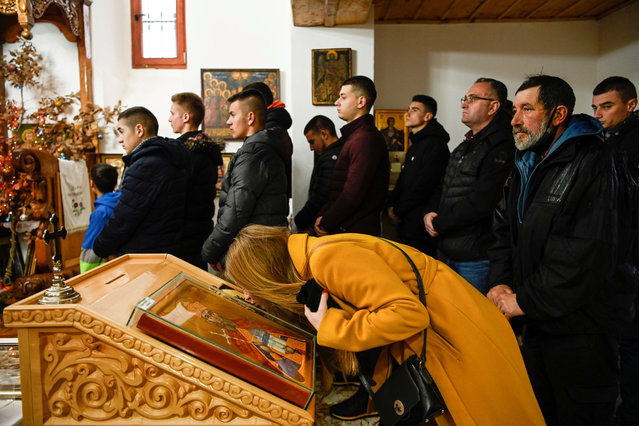 Kosovo Serb faithful attend a liturgy during Orthodox Christmas ceremony in the village of Gusterica on January 7, 2021. Serbian Orthodox believers celebrate Christmas according to the Julian calendar, which runs two weeks behind the Gregorian calendar. (Photo by Armend Nimani/AFP Photo) 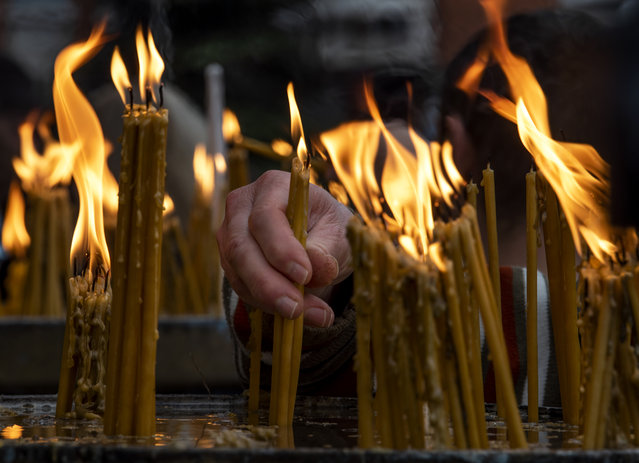 An Orthodox believer lights candles during a Christmas mass outside the central Orthodox Church of Saint Clement in Skopje, Republic of North Macedonia, 07 January 2021. Orthodox Christians celebrate Christmas Day on 07 January according to the Julian calendar. (Photo by Georgi Licovski/EPA/EFE) 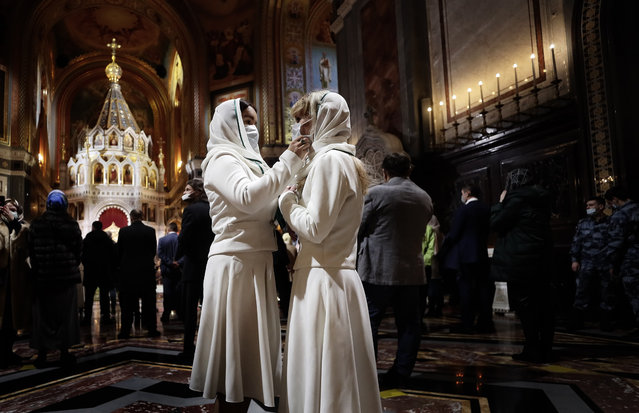 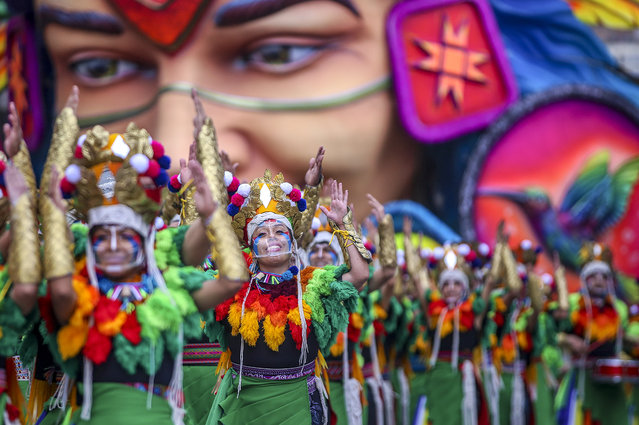