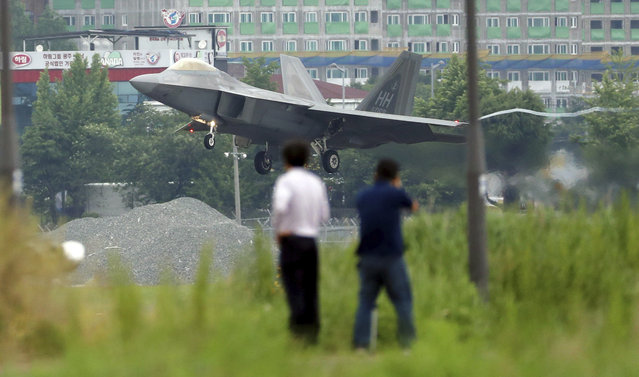 A U.S. F-22 Raptor stealth fighter jet lands as South Korea and the United States conduct the Max Thunder joint military exercise at an air base in Gwangju, South Korea, Wednesday, May 16, 2018. North Korea on Wednesday canceled a high-level meeting with South Korea and threatened to scrap a historic summit next month between President Donald Trump and North Korean leader Kim Jong Un over military exercises between Seoul and Washington that Pyongyang has long claimed are invasion rehearsals. (Photo by Park Chul-hog/Yonhap via AP Photo) 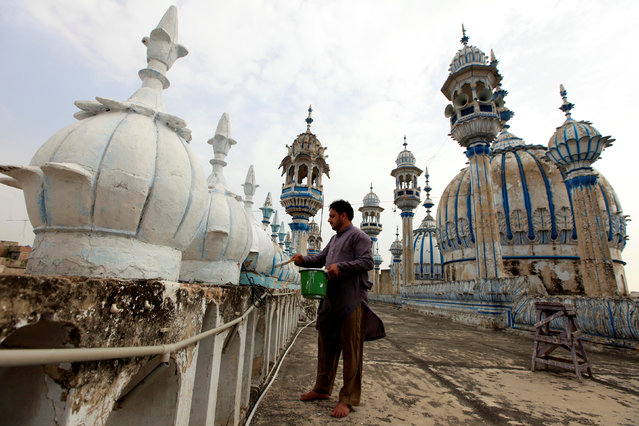 A man carries out cleaning work at Jamia Masjid (Grand Mosque) ahead of Muslim holy month of Ramadan in Rawalpindi, Pakistan May 15, 2018. (Photo by Faisal Mahmood/Reuters) 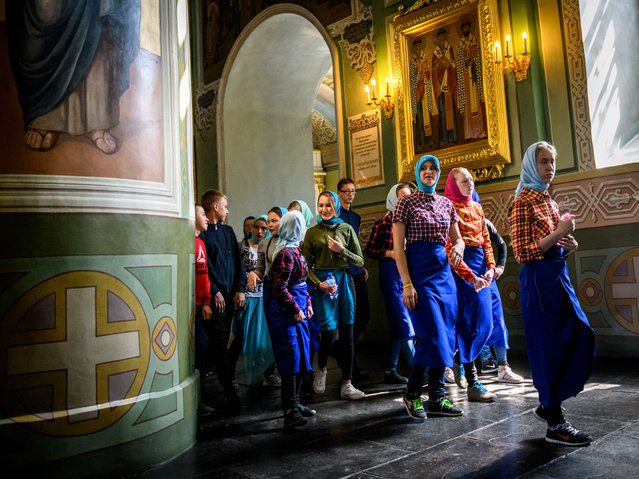 A group of school children visits a church in the Kremlin in the Russian city of Kazan on May 15, 2018. Kazan will host four group games, a Round of 16 match and a quarter-final of the 2018 FIFA World Cup. (Photo by Mladen Antonov/AFP Photo) 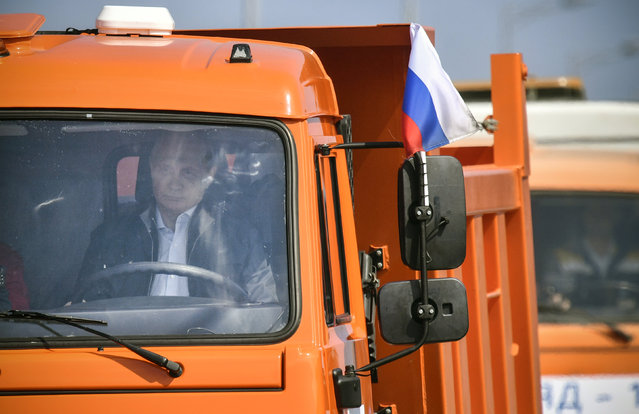 Russian President Vladimir Putin drives a Kamaz truck during a ceremony opening a bridge, which was constructed to connect the Russian mainland with the Crimean Peninsula across the Kerch Strait, May 15, 2018. (Photo by Alexander Nemenov/Reuters/Pool) 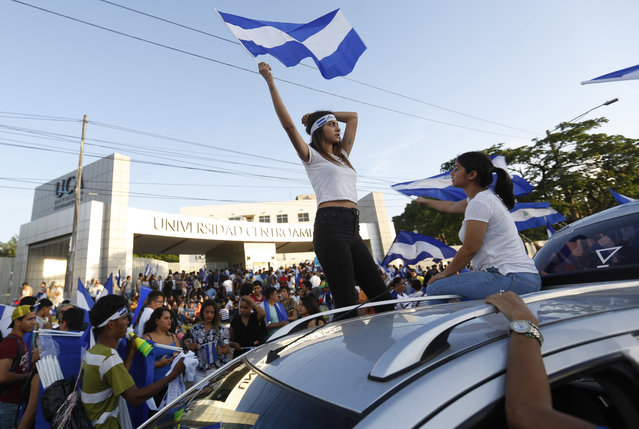 People protest outside the Universidad Centro Americana against the government of President Daniel Ortega, in Managua, Nicaragua, Monday, May 14, 2018. The Nicaraguan Council of Bishops said talks between civic groups and the administration of President Daniel Ortega will start Wednesday morning, following weeks of anti-government protests in which an estimated 65 people have been killed. (Photo by Alfredo Zuniga/AP Photo) 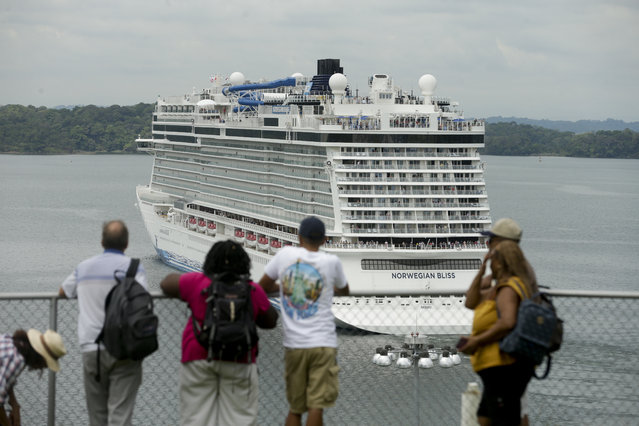 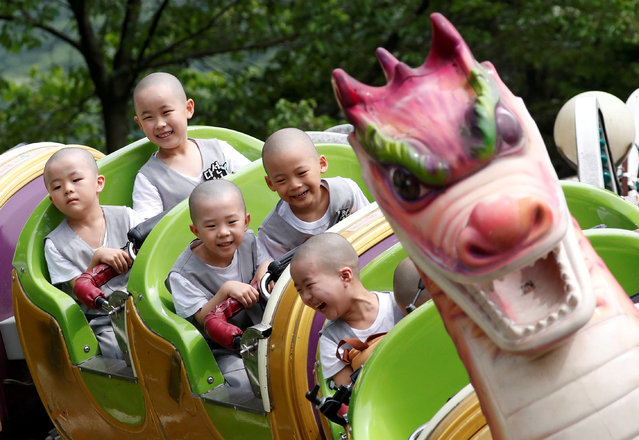 Boys, who are experiencing the lives of Buddhist monks by staying in a temple for two weeks as novice monks, enjoy a ride at the Everland amusement park in Yongin, South Korea, May 15, 2018. (Photo by Kim Hong-Ji/Reuters) 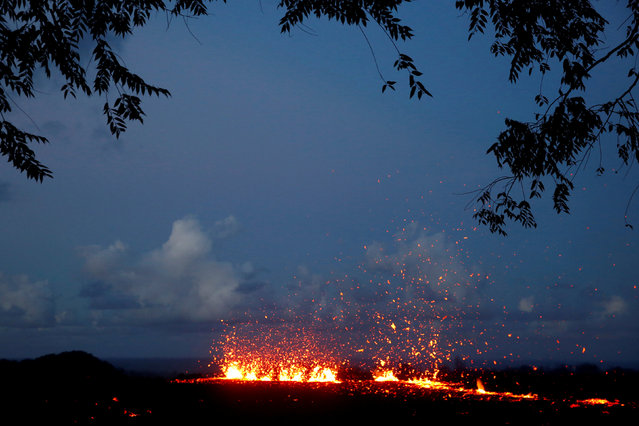 Lava erupts from a fissure on the outskirts of Pahoa during ongoing eruptions of the Kilauea Volcano in Hawaii, U.S., May 14, 2018. (Photo by Terray Sylvester/Reuters) 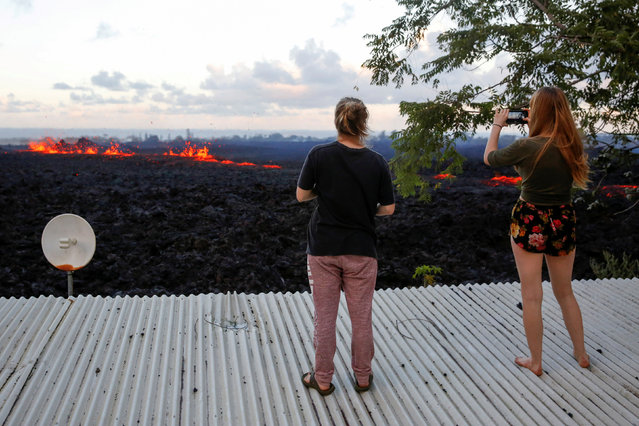 Jolon Clinton, 15, (L), and her sister, Halcy, 17, take photos of a fissure near their home on the outskirts of Pahoa during ongoing eruptions of the Kilauea Volcano in Hawaii, U.S., May 14, 2018. (Photo by Terray Sylvester/Reuters) 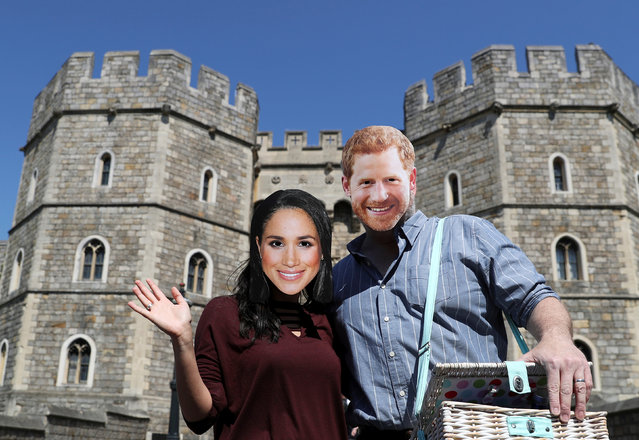 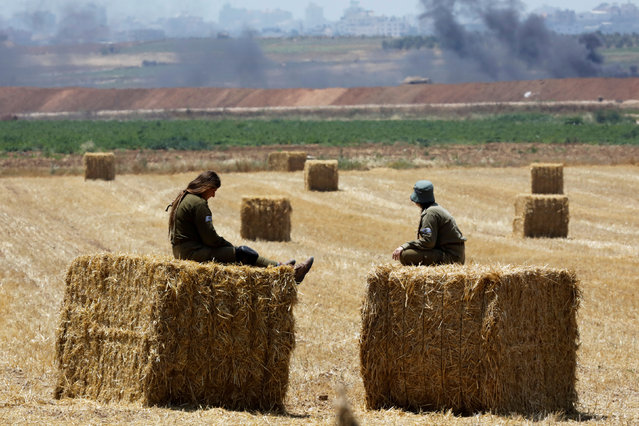 Israeli soldiers sit on bales of hay in a field overlooking Gaza, on the Israeli side of the border between Israel and the Gaza Strip May 15, 2018. (Photo by Amir Cohen/Reuters) 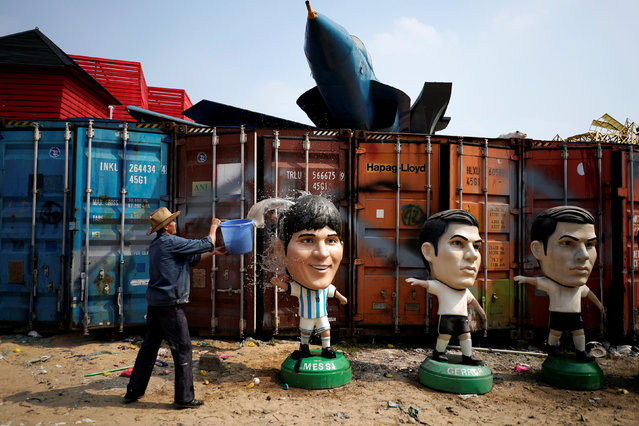 A worker cleans a Lionel Messi figure at a small factory in the outskirts of Shanghai, China May 15, 2018. (Photo by Aly Song/Reuters) 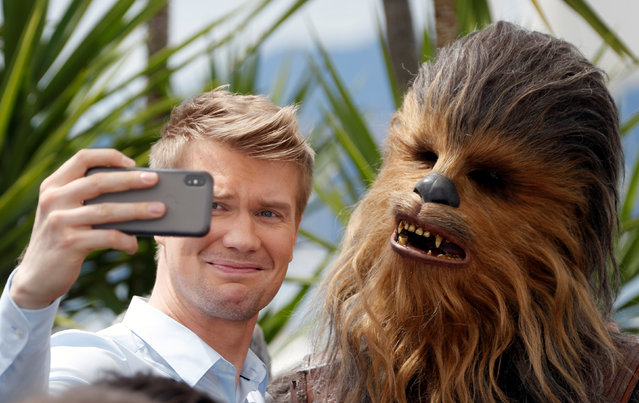 Cast member Joonas Suotamo takes a selfie with Chewbacca as they arrive on May 15, 2018 for the screening of the film “Solo : A Star Wars Story” at the 71 st edition of the Cannes Film Festival in Cannes, southern France. (Photo by Eric Gaillard/Reuters) 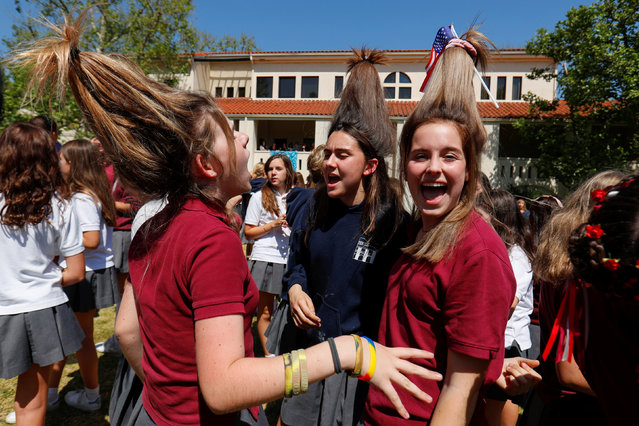 Students wear their hair up like hats at Meghan Markle's former Los Angeles high school as they stage a “Here's to Meghan!” celebration ahead of her marriage to Prince Harry, as they celebrate at Immaculate Heart High School in Los Angeles, California, U.S., May 15, 2018. (Photo by Mike Blake/Reuters) 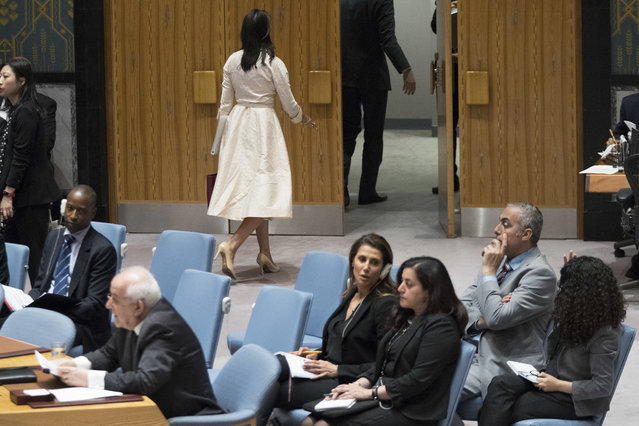 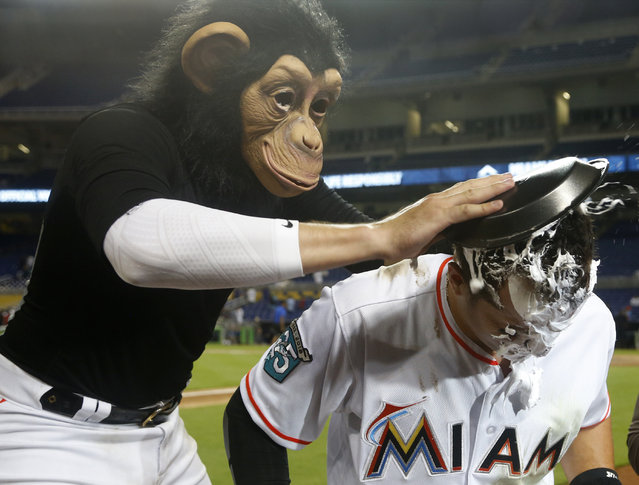 Wearing a monkey mask, Miami Marlins' Miguel Rojas hits Martin Prado with a shaving-cream pie as Prado is interviewed after a baseball game Tuesday, May 15, 2018, in Miami. The Marlins defeated the Los Angeles Dodgers 4-2. (Photo by Wilfredo Lee/AP Photo) 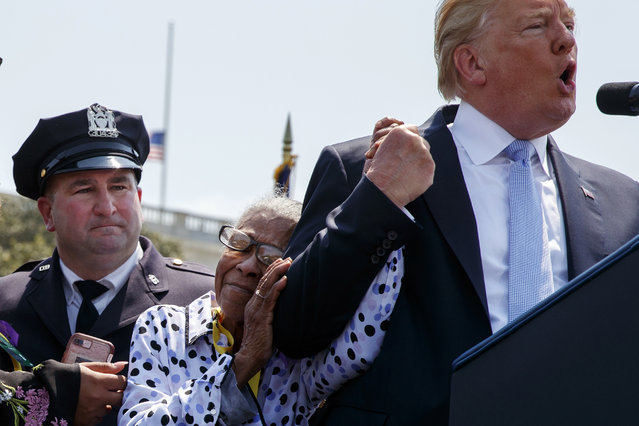 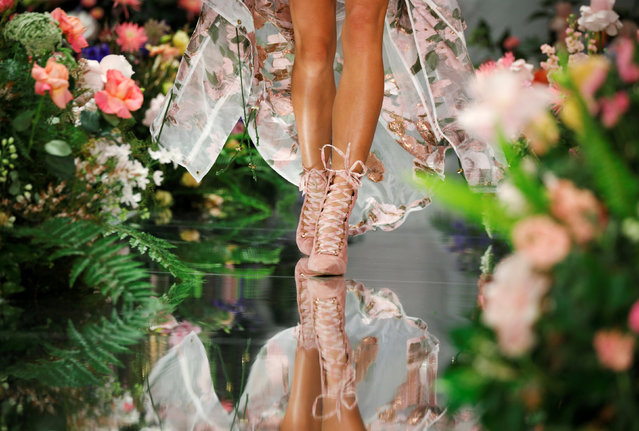 A model presents a creation by We Are Kindred during the Australian Fashion Week at Carriageworks in Sydney, Australia May 15, 2018. (Photo by Edgar Su/Reuters) 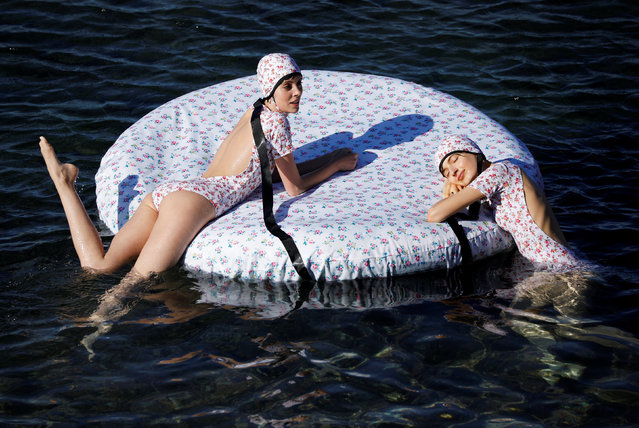