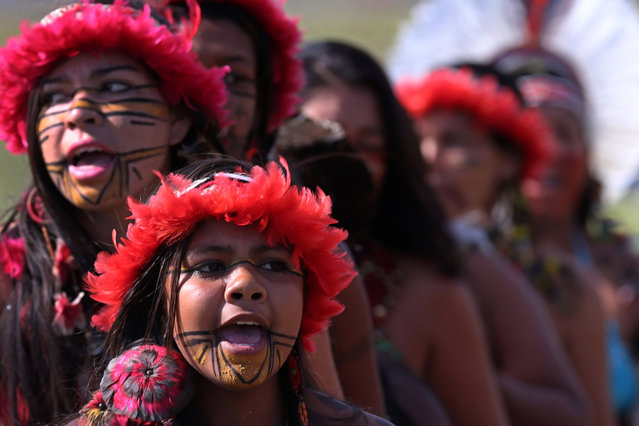 Brazilian Pataxo women take part in a ritual dance during a protest against a proposed constitutional amendment that would put the demarcation of indigenous lands into the hands of the Congress, in front of the Brazil's National Congress, in Brasilia, Brazil, Tuesday, November 10, 2015. A lower house commission has approved the proposal but it must make its way through the Senate, and be signed by President Dilma Rousseff to become law. (Photo by Eraldo Peres/AP Photo) 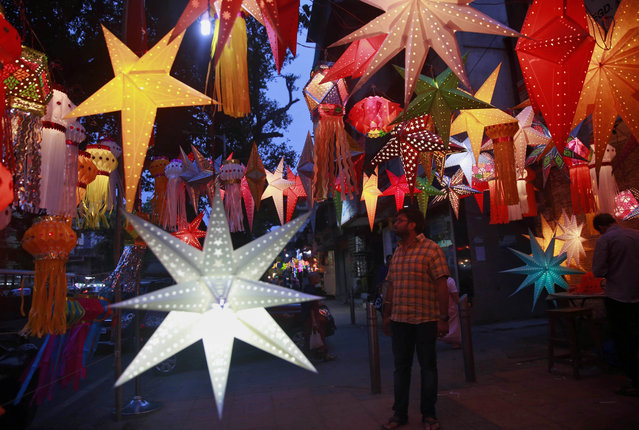 An Indian man stands near lanterns on display at a roadside stall on the eve of Diwali, the Hindu festival of lights, in Mumbai, India, Tuesday, November 10, 2015. Hindus light up their homes and pray to Lakshmi, the goddess of wealth, during the festival which will be celebrated on Wednesday. (Photo by Rafiq Maqbool/AP Photo) 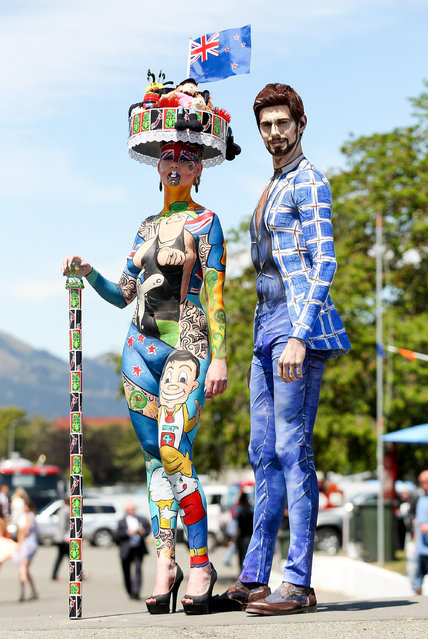 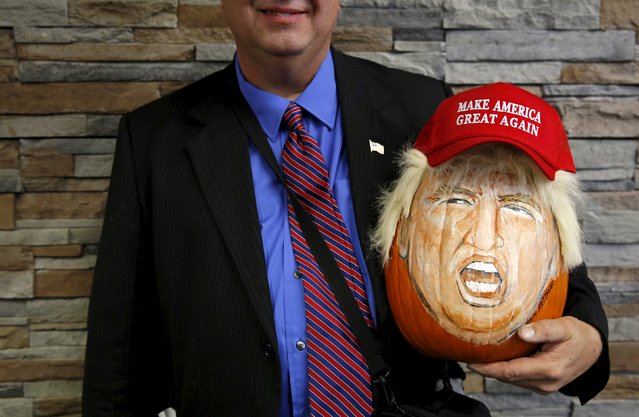 A supporter of U.S. Republican presidential candidate Donald Trump holds a pumpkin painted in the likeness of Trump as he waits to get into a campaign event in Springfield, Illinois, United States, November 9, 2015. (Photo by Jim Young/Reuters) 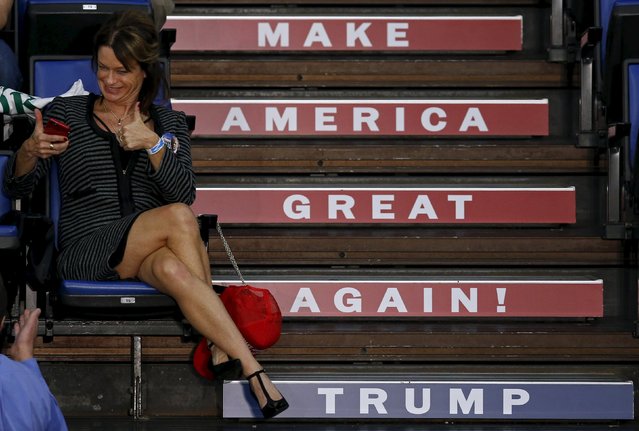 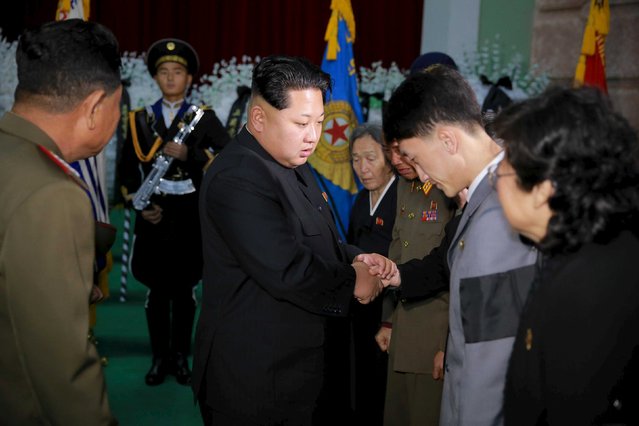 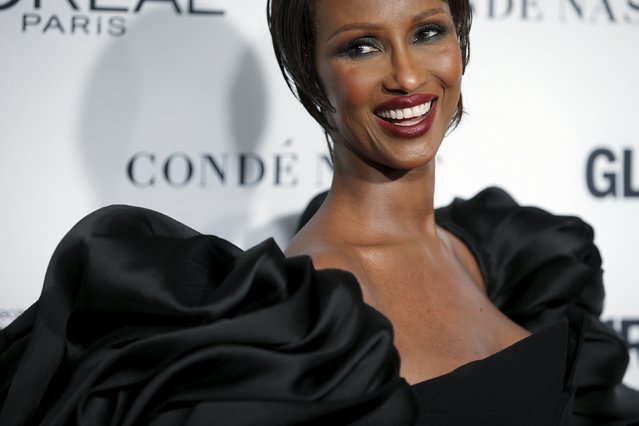 Supermodel Iman arrives for the "Glamour Women of the Year Awards" in the Manhattan borough of New York, November 9, 2015. (Photo by Carlo Allegri/Reuters) 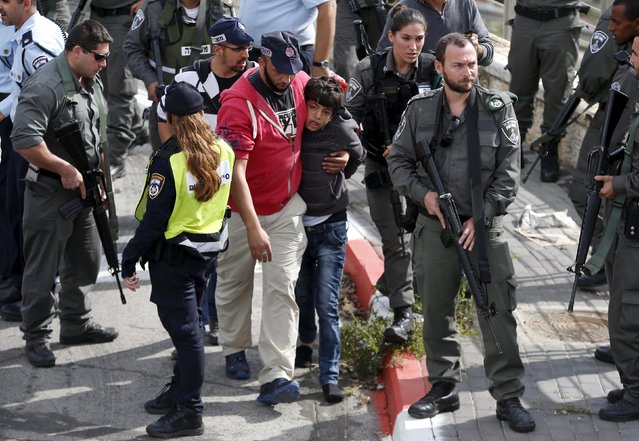 Israeli police lead away a Palestinian minor (C) they said stabbed an Israeli security guard in Pisgat Zeev, which lies on occupied land that Israel annexed to Jerusalem after the 1967 Middle East war, November 10, 2015. An Israeli police spokeswoman said two Palestinians, who she said were aged 12 to 13, stabbed a security guard on the Jerusalem light-rail train in Pisgat Zeev, a Jewish settlement north of Jerusalem. The guard shot back at them wounding one. (Photo by Ammar Awad/Reuters) 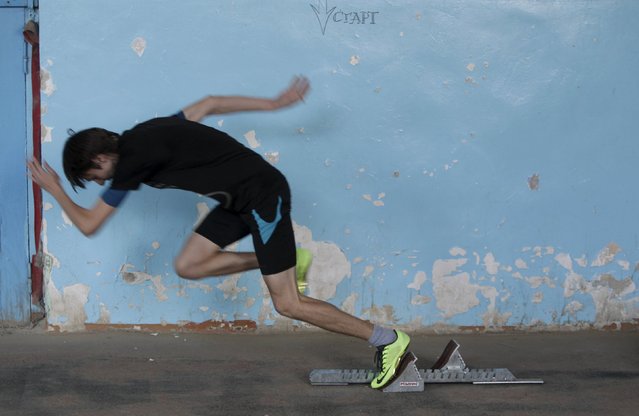 A sportsman trains at the premises of a local stadium in the southern city of Stavropol, Russia, November 10, 2015. The Russian Sports Ministry said on Tuesday it was open for closer cooperation with the World Anti-Doping Agency (WADA) in order to eliminate any irregularities committed by the Russian anti-doping watchdog and its accredited laboratory. On Monday an anti-doping commission report alleged widespread corruption in Russia, triggering one of the biggest doping scandals in sporting history. (Photo by Eduard Korniyenko/Reuters) 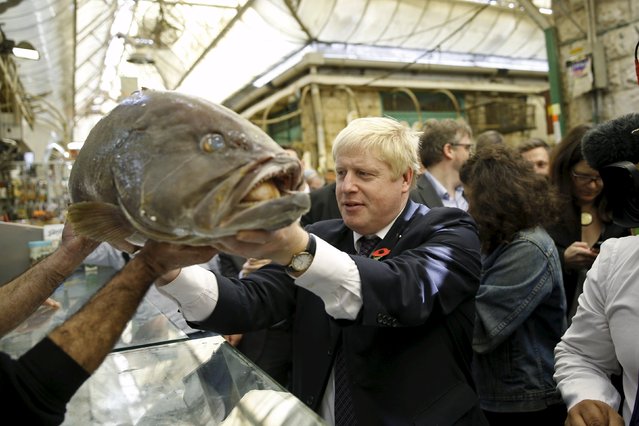 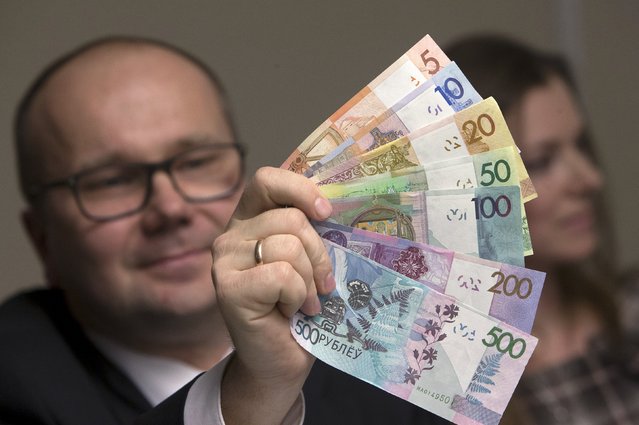 Deputy Chairman of the Board of the National Bank of the Republic of Belarus Dmitry Lapko displays a sample banknote during a news conference in Minsk, November 10, 2015. Belarus plans to lower the denomination of the Belarusian rouble by July 1, 2016, according to local media. (Photo by Vasily Fedosenko/Reuters) 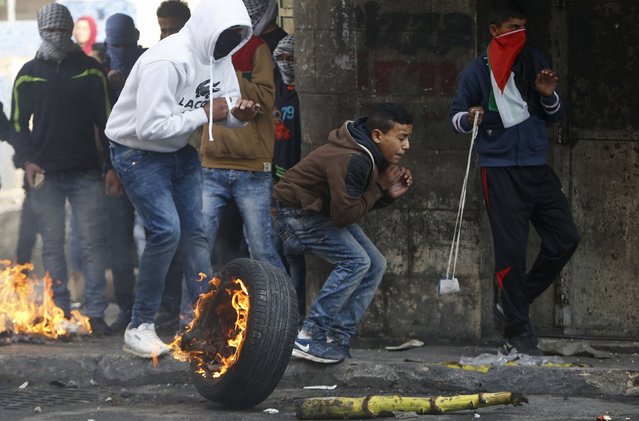 A Palestinian demonstrator reacts during clashes with Israeli troops following a protest demanding Israel to return the dead bodies of Palestinians who allegedly stabbed Israelis, in the West Bank city of Hebron November 10, 2015. (Photo by Mussa Qawasma/Reuters) 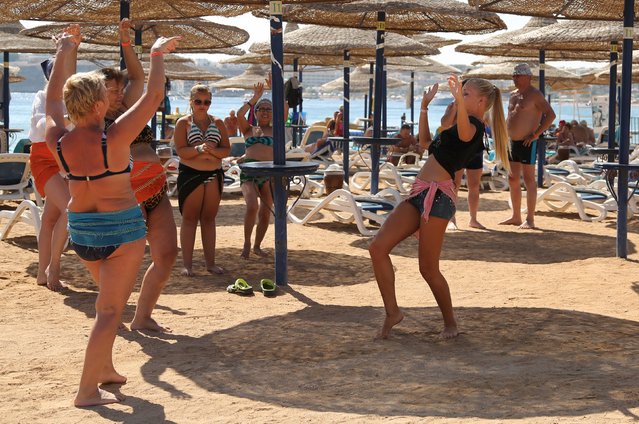 A Russian employee of a hotel teaches belly dancing to Russian tourists at the Red Sea resort of Sharm el-Sheikh, November 10, 2015. Tourism in Sharm al-Sheikh was picking up again after years of political turmoil, with so many Russians enjoying the sun and fun that local beach aerobics instructors used the visitors' own language rather than Arabic or English. Life was at last starting to look good for residents of the Red Sea resort, but that was before an airliner taking Russian tourists home broke up over the Sinai Peninsula, where Islamic State militants suspected of planting a bomb on the plane are waging an insurgency. Now the future looks grim for thousands of Egyptians, from taxi drivers to diving instructors, who flocked to Sharm al-Sheikh to find jobs. One tour company official predicted holidays might now have to be discounted by up to 50 percent. (Photo by Asmaa Waguih/Reuters) 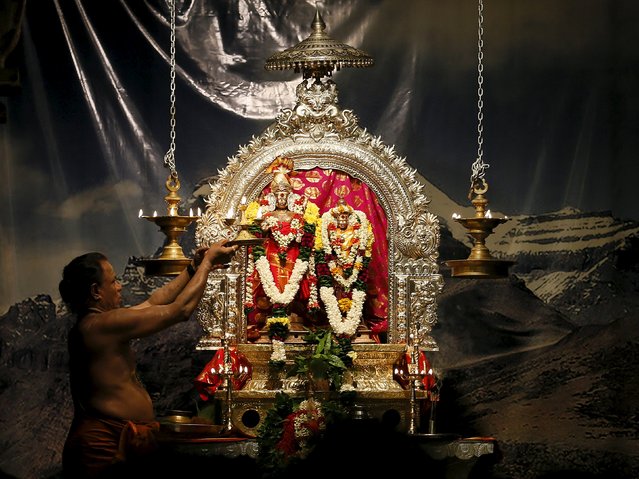 A Hindu priest makes a blessing during the festival of Diwali at Shivm Kovi temple in Colombo November 10, 2015. Prayers and offerings are made to Hindu gods and goddesses on the occasion of Diwali, the annual festival of lights. (Photo by Dinuka Liyanawatte/Reuters) 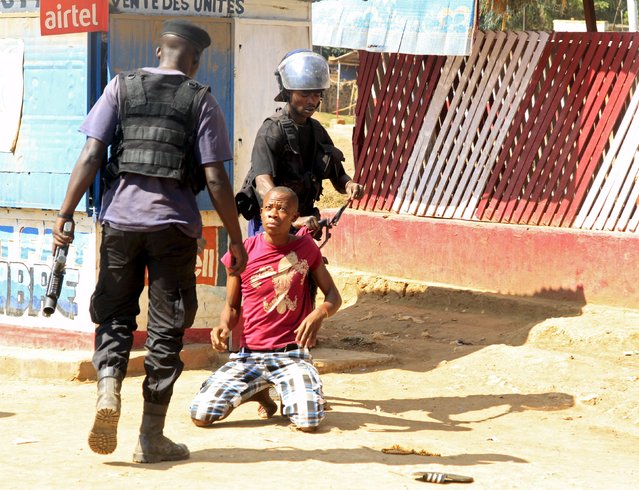 Policemen detain a protester during clashes in Lubumbashi, Democratic Republic of Congo November 10, 2015. Police fired tear gas at hundreds of people armed with sticks and shovels protesting the arrest of several youth leaders in Congo's second largest city of Lubumbashi on Tuesday, a Reuters witness said. (Photo by Kenny Katombe/Reuters) 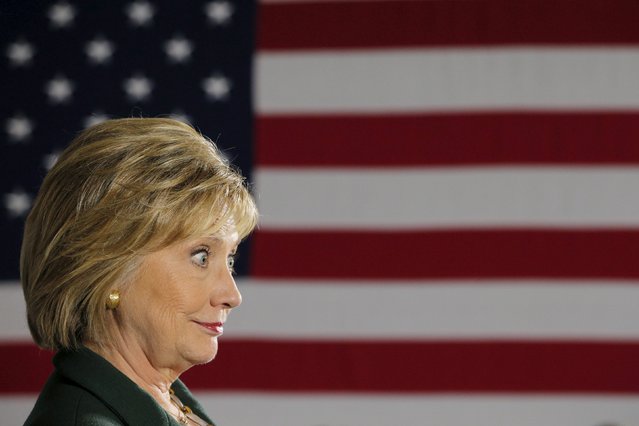 U.S. Democratic presidential candidate Hillary Clinton listens to a question from the audience during a veterans roundtable discussion with the Truman National Security Project at the VFW Hall in Derry, New Hampshire November 10, 2015. (Photo by Brian Snyder/Reuters) 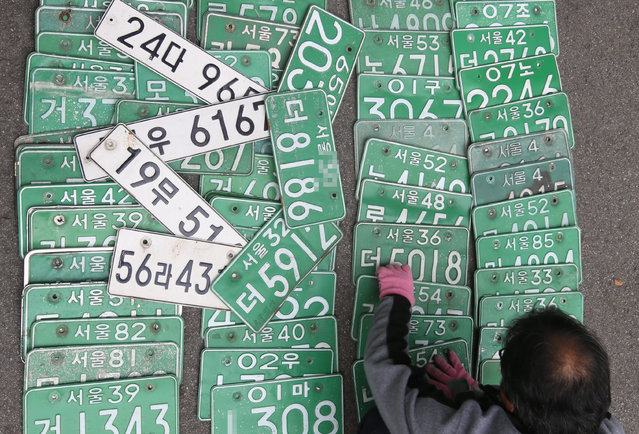 An employee at Jongno Ward Office sorts through confiscated car license plates in Seoul, South Korea, 12 November 2015. The plates were taken from cars owned by people who repeatedly dodged paying taxes in a campaign conducted nationwide. (Photo by EPA/Yonhap) 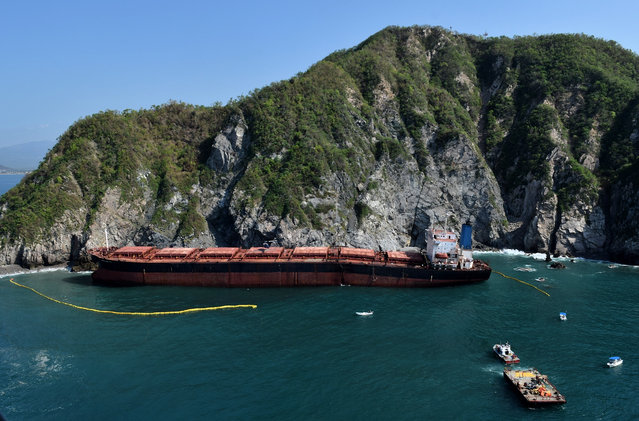 Mexico’s navy heads an operation to remove hazardous waste and transfer fuel and oil from the cracked hull of the Los Llanitos after it ran aground during hurricane Patricia in Barra de Navidad, Mexico on November 10, 2015. (Photo by Enrique Perez Huerta/Demotix/Corbis) 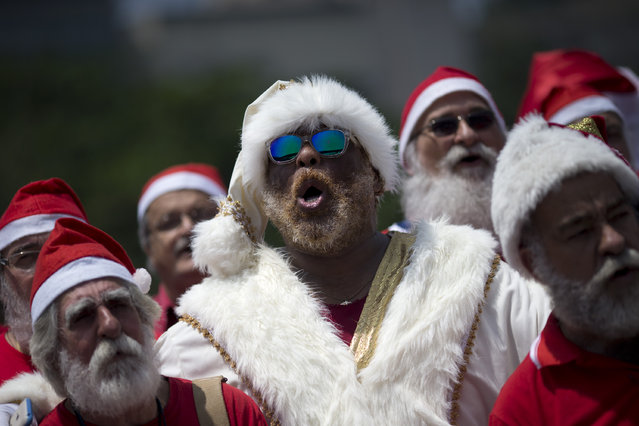 Recent graduates of a Santa school sing Christmas carols during their graduation ceremony in Rio de Janeiro, Brazil, Tuesday, November 10, 2015. The "Escola de Papai Noel do Brasil" graduated dozens of students who are now ready to be hired to play the part of Kriss Kringle during the Christmas season. (Photo by Silvia Izquierdo/AP Photo) 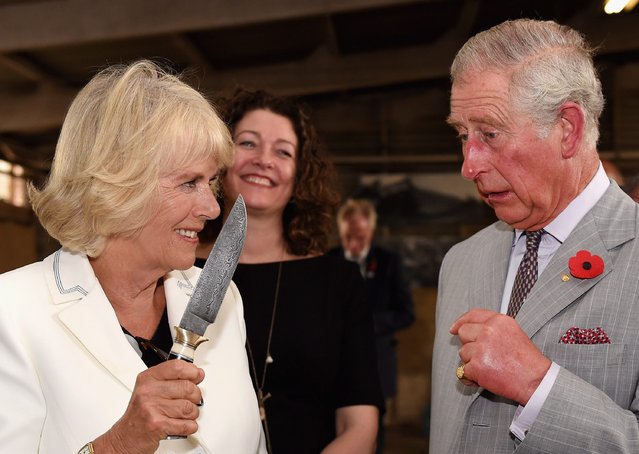 Prince Charles, Prince of Wales (R) and Camilla, Duchess of Cornwall (L) visit Seppeltsfield Winery in Barossa Valley, Australia, 10 November 2015. The royal couple are on a 12-day tour visiting seven regions in New Zealand and three states and one territory in Australia. (Photo by Daniel Kalisz/EPA) 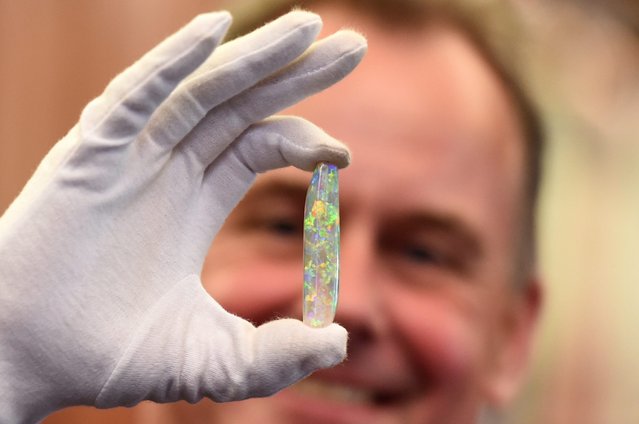 Director of the South Australian Museum Brian Oldman holds The Virgin Rainbow Opal ahead of Camilla, Duchess of Cornwall's viewing of a selection of opals from the South Australian Museum Opal Exhibition at Government House in Adelaide, Australia, 10 November 2015. The royal couple are on a 12-day tour visiting seven regions in New Zealand and three states and one territory in Australia. (Photo by Tracey Nearmy/EPA) 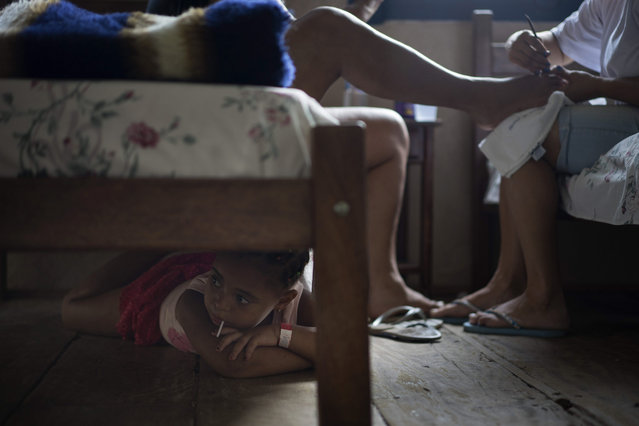 Five-year-old Nicole eats a lollipop under a bed while her mother gets a pedicure at a hotel housing people displaced from a dam failure, in Mariana, in the Brazilian state of Minas Gerais, Monday, November 9, 2015. Nicole's home was destroyed Thursday when two dams at an iron ore mine flooded Bento Rodrigues, a village in southeastern Brazil. Gov. Fernando Pimentel said it was still not known what triggered the failure of dams at the Samarco mine, which sent viscous red mud, water and debris flooding into Bento Rodrigues, flattening all but a handful of buildings. (Photo by Felipe Dana/AP Photo) 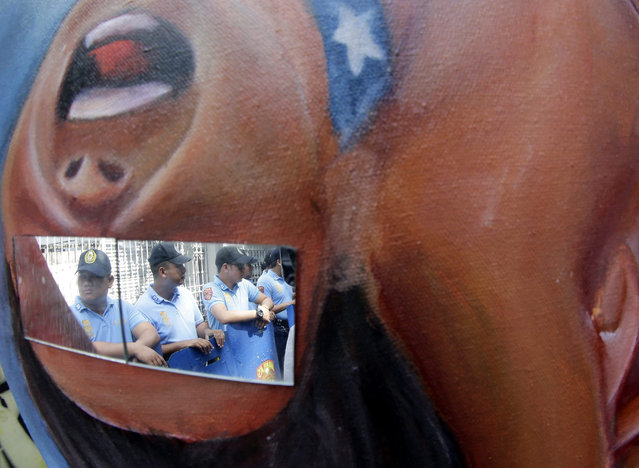 Filipino anti riot police are refected on a glass mounted on a protest placcard during a picket in front of the Philippine Supreme Court to coincide with its en banc session on the constitutionality of the Enhanced Defense Cooperation Agreement (EDCA) in Manila, Philippines, 10 November 2015. According to the statement of the protesters, they alledged that the EDCA will be presented as a gift to President Barack Obama when he visits the country to attend the APEC (Asia-Pacific Economic Cooperation) Summit. The Philippines will hosts the meetings starting November 12, with the summit on November 18-19. President Benigno Aquino III will host a welcome dinner for the leaders of the 21 member countries on November 18. (Photo by Francis R. Malasig/EPA) 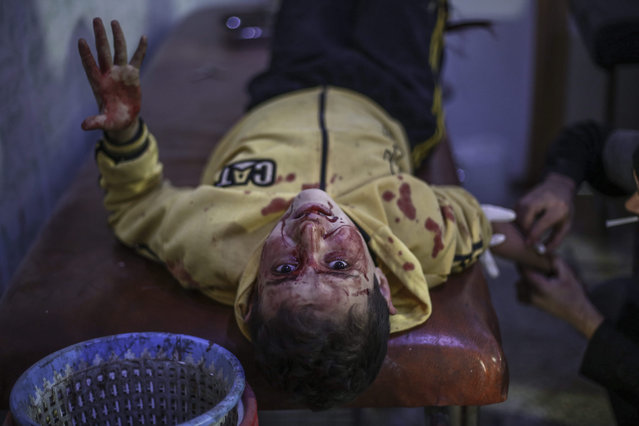 A Syrian child reacts as he receives first aid in a field hospital following an airstrike by forces loyal to the Syrian government in the rebel-held area of Douma, outskirts of Damascus, Syria, 10 November 2015. According to the opposition, at least ten civilians were killed in Syrian regime strikes on the rebel-held Douma on 10 November. (Photo by Mohammed Badra/EPA) 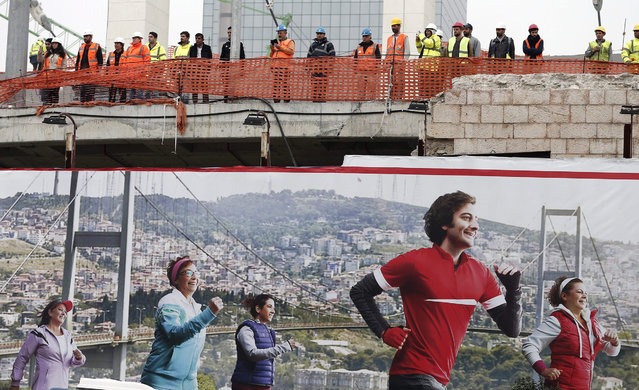 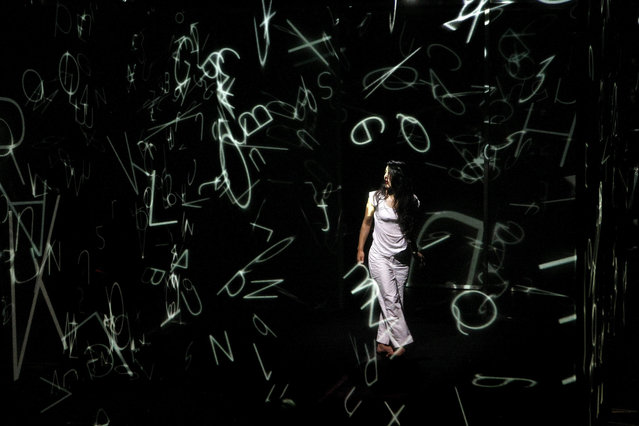 A dancer of French company Adrien M / Claire B performs the piece 'Hakanai' during the Second International Dance Biennial in Cali, Colombia, 09 November 2015. More than 800 dancers from 26 domestic and 12 international companies perform from 06 to 14 November. (Photo by Christian Escobar Mora/EPA) 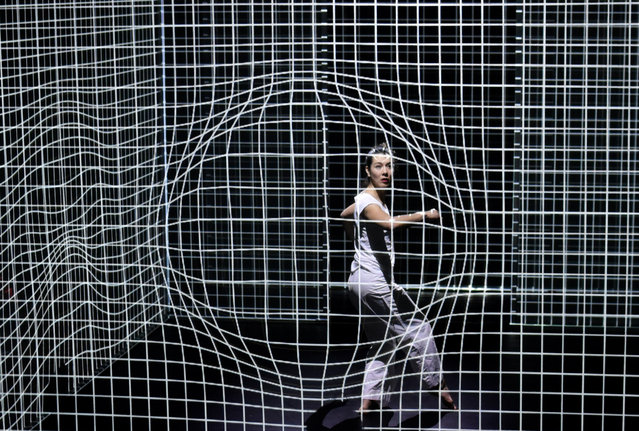 A dancer of Adrien M / Claire B Company from France performs during the 2nd International Dance Biennial of Cali, on November 9, 2015 in Cali, department of Valle del Cauca, Colombia. 26 Colombian companies and 12 international companies with 800 dancers will perform from November 6 to 11 in Cali. (Photo by Luis Robayo/AFP Photo) 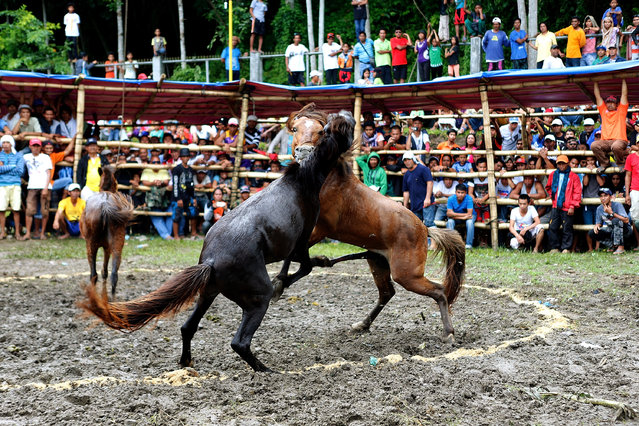 Villagers watch horse fighting on November 10, 2015 in the southern Philippine town of Lake Sebu, South Cotabato, Philippines. The sport of horse-fighting pits two stallions against each other during mating season by forcing them to fight until retreat or death over a mare in heat. Despite laws enacted in 1998 banning the sport of horse fighting in the Philippines, many communities particularly on the island of Mindanao still celebrate the sport as a long time cultural tradition. (Photo by Jeoffrey Maitem/Getty Images) 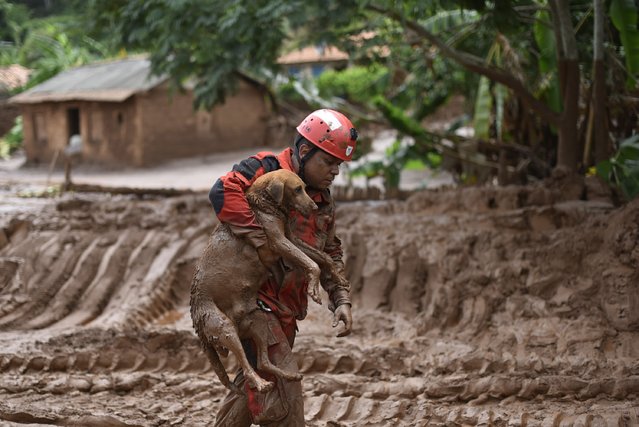 A fireman rescues in Paracatu de Baixo, Minas Gerais, Brazil on November 9, 2015 a dog that was trapped in the mud that swept through the Village of Bento Rodrigues on Thursday killing at least one person and leaving other 26 missing. The tragedy occurred Thursday when waste reservoirs at the partly Australian-owned Samarco iron ore mine burst open, unleashing a sea of muck that flattened the nearby village of Bento Rodrigues. (Photo by Douglas Magno/AFP Photo) 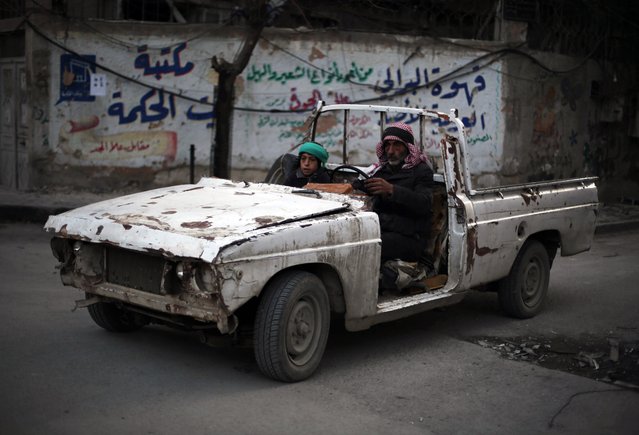 A Syrian man and his son drive in vehicle battered by years on conflict in the rebel-held area of Douma, east of the capital Damascus, on November 10, 2015. (Photo by Amer Almohibany/AFP Photo)
Edit Del
12 Nov 2015 08:07:00, post received 0 comments
Publication archive:
←   →
Popular tags:
All tags
Last searches: