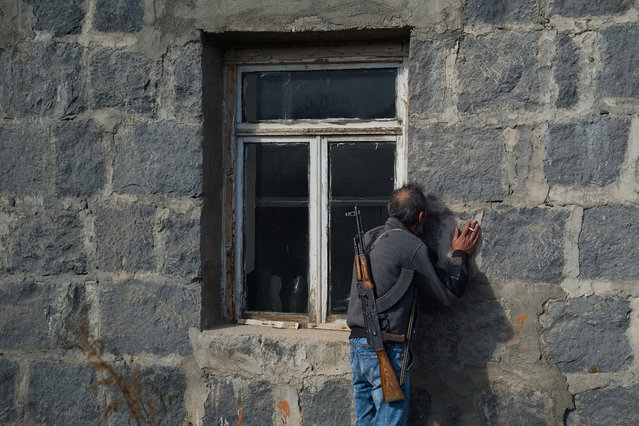 A man kisses the walls of his home before abandoning it as fear of Azeri persecution prompts him to leave his homeland on November 12, 2020 in Karvachar, Nagorno-Karabakh. Ethnic Armenians living in the Karvachar district of the disputed territory Nagorno-Karabakh said goodbye to their homes after the land had been ceded by Armenia to Azerbaijan as per a peace agreement made between the two countries on November 9, 2020. (Photo by Alex McBride/Getty Images) 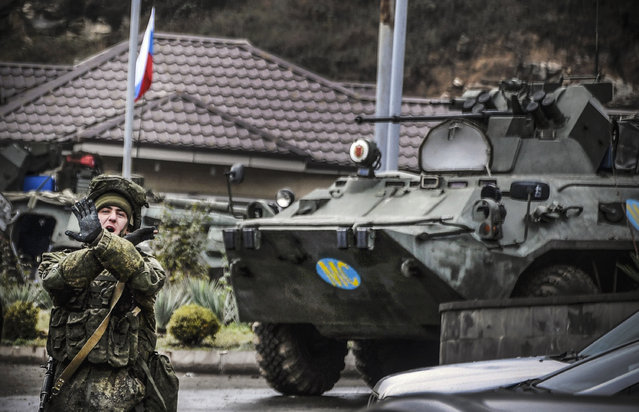 A Russian peacekeeper shouts “No pictures!” at a checkpoint outside the city of Stepanakert on November 13, 2020, during a ceasefire in the military conflict between Armenia and Azerbaijan over the breakaway region of Nagorno-Karabakh. Russian began deploying 2,000 peacekeepers to Nagorno-Karabakh on November 10 after Armenia and Azerbaijan agreed a peace deal to end weeks of fierce fighting over the disputed region. The Moscow-brokered agreement came after a string of Azerbaijani victories in its fight to retake the ethnic Armenian enclave. It sparked celebrations in Azerbaijan but fury in Armenia, where protesters took to the streets to denounce their leaders for losses in the territory, which broke from Azerbaijan's control during a war in the early 1990s. (Photo by Alexander Nemenov/AFP Photo) 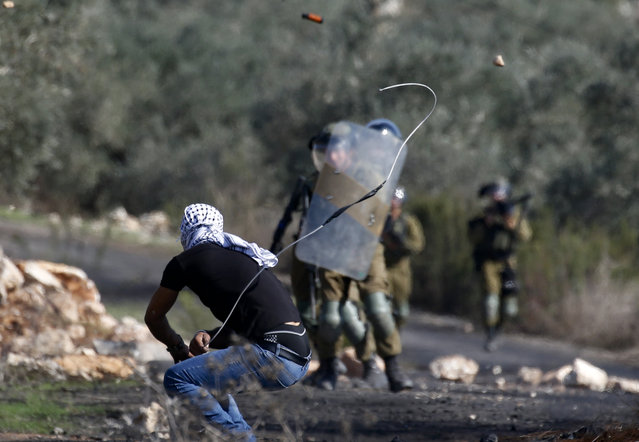 A Palestinian demonstrator uses a slingshot to hurl stones toward Israeli security forces during clashes with them following a weekly demonstration in the occupied West Bank village of Kfar Qaddum, on November 13, 2020. (Photo by Jaafar Ashtiyeh/AFP Photo) 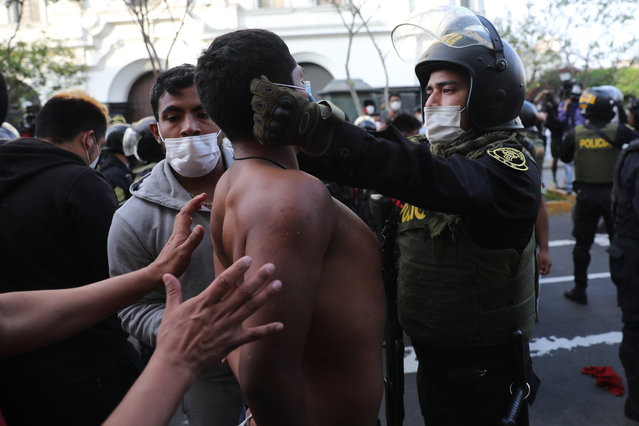 A police officer places a protective face mask on a protester who was detained near Congress where lawmakers swore-in a new president after voting to oust President Martin Vizcarra the day before, in Lima, Peru, Tuesday, November 10, 2020. Peru swore in businessman and head of Congress Manuel Merino Tuesday who is unknown to most and was recently accused of trying to secure the military’s support for a congressional effort to boot the nation’s last leader out over unproven corruption allegations. (Photo by Rodrigo Abd/AP Photo) 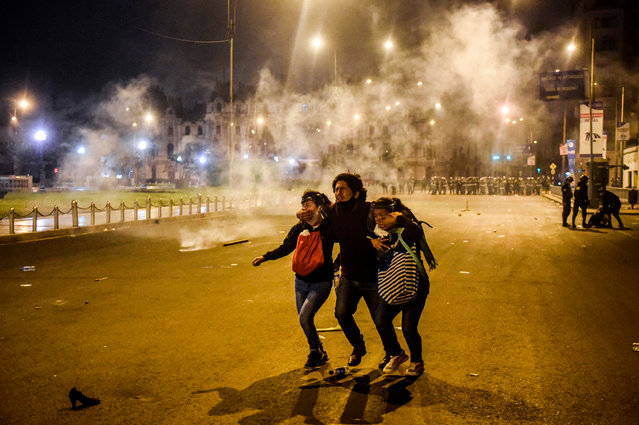 Demonstrators run away from tear gas during a protest against the new government of interim President Manuel Merino, following the impeachment and removal of former Peruvian President Martin Vizcarra, at the San Martin square in Lima on November 12, 2020. Speaker of Congress Manuel Merino assumed office on November 10 as Peru's third president in four years, amid street protests and market jitters after the impeachment of Martin Vizcarra over corruption allegations. (Photo by Ernesto Benavides/AFP Photo) 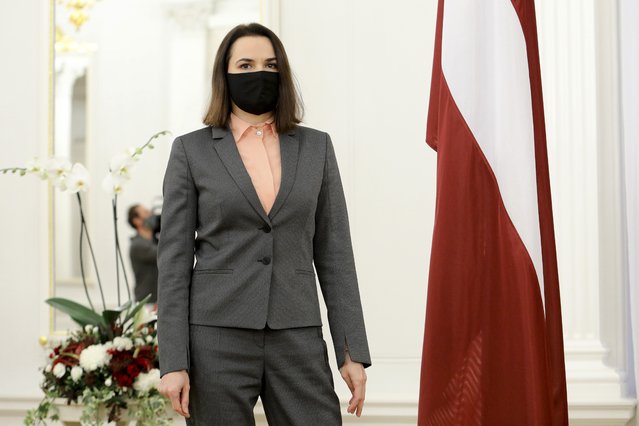 Belarusian opposition leader Sviatlana Tsikhanouskaya wearing a fave mask to protect against coronavirus poses for a photo prior to a meeting with Latvian President Egils Levits at the Presidentian Castle in Riga, Latvia, Friday, November 13, 2020. (Photo by Dmitrijs Sulzics/AP Photo) 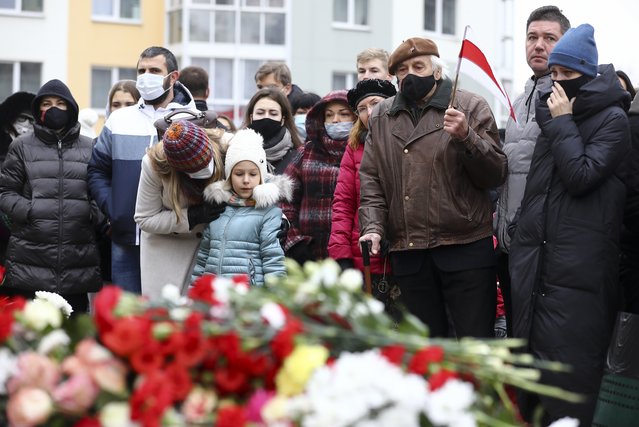 People gather to honor 31-year-old Raman Bandarenka, who died Thursday at a Minsk hospital after several hours of surgery due to serious injuries, in Minsk, Belarus, Friday, November 13, 2020. Thousands of people have rallied in Belarus on Friday following the death of a 31-year-old opposition supporter who died in a hospital after he was reportedly beaten by security forces, and the European Union condemned the continued violent crackdown that Belarusian authorities have waged on peaceful protesters. (Photo by AP Photo/Stringer) 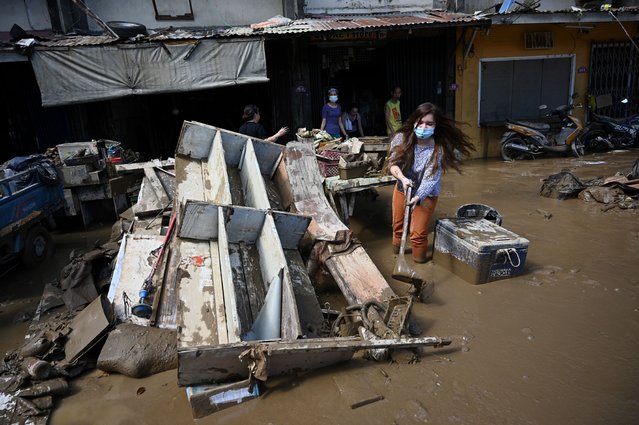 A resident uses a dust pan to shovel away muddy water next to debris in front of her flood-damaged home in a residential area in Marikina City, suburban Manila, on November 13, 2020, a day after Typhoon Vamco hit the capital area bringing heavy rains and floodings. (Photo by Ted Aljibe/AFP Photo) 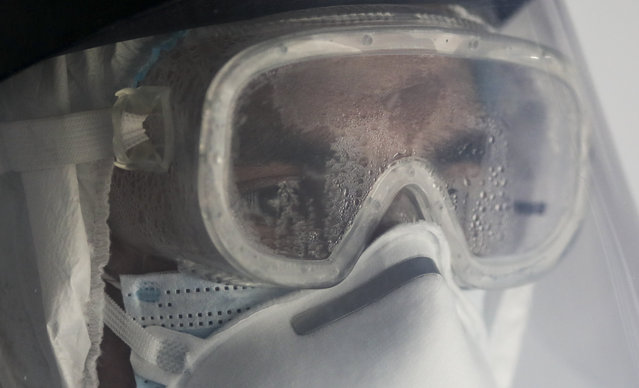 A healthcare worker, dressed in full protective gear, waits to test a person for the new coronavirus inside a mobile diagnostic tent, in the Coyoacan district of Mexico City, Friday, November 13, 2020. Mexico City announced Friday it will order bars closed for two weeks after the number of people hospitalized for COVID-19 rose to levels not seen since August. (Photo by Eduardo Verdugo/AP Photo) 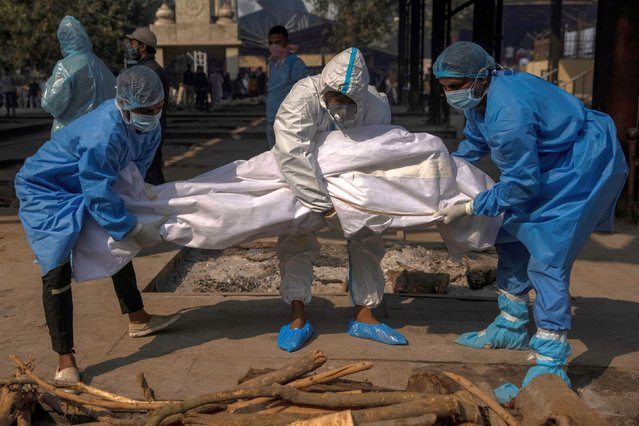 Health workers and a relative put the body of a man, who died due to COVID-19, on a pyre for his cremation in New Delhi, India, November 13, 2020. (Photo by Danish Siddiqui/Reuters) 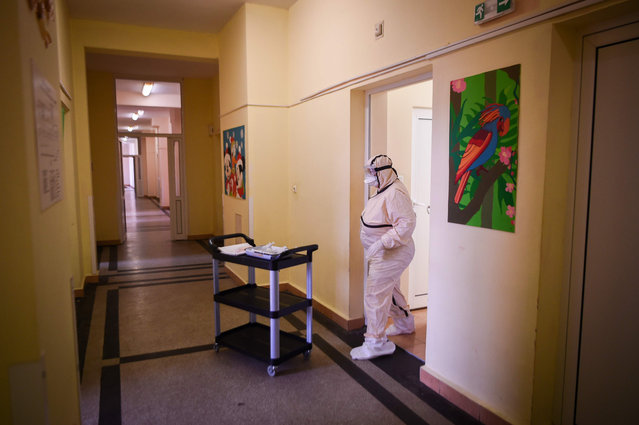 A medical personnel wearing a personal protective equipment works in the novel coronavirus Covid-19 section of a hospital in the city of Shumen, North-East Bulgaria. Poorest countries in the EU, Bulgaria and Romania had mastered the first wave of covid-19 with early lockdowns. But the second wave, more violent, revealed the inequalities of the system where hospitals are “commercial companies” and many young people leave for the West. (Photo by Nikolay Doychinov/AFP Photo) 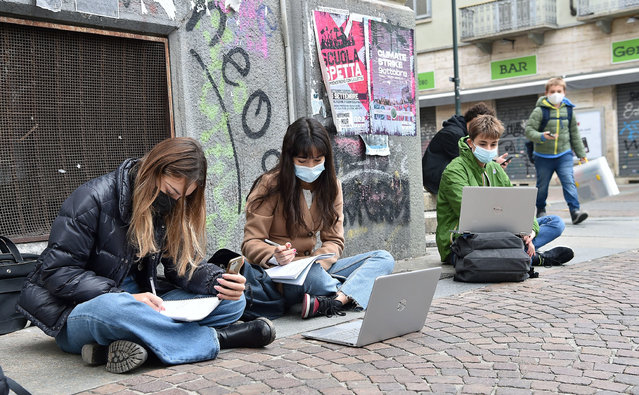 Gioberti and Calvino school students study on the street due to school closures imposed by the government due to an increase in COVID-19 d​isease infections, in Turin, Italy, 13 November 2020. (Photo by Alessandro Di Marco/EPA/EFE) 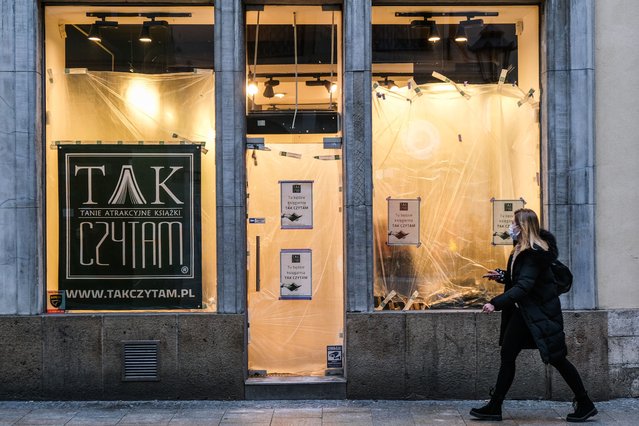 A woman wearing a face mask as a precaution walking past a closed store during the covid-19 pandemic. Poland is now passing through the second wave of coronavirus and introduces new restrictive measures such as the closure of stores inside shopping malls, gatherings with a maximum of 5 people, bars and restaurants operating on a takeaway basis among others. Poland has registered more than 615,000 COVID-19 infections and a death toll above 8000. (Photo by Omar Marques/SOPA Images/LightRocket via Getty Images) 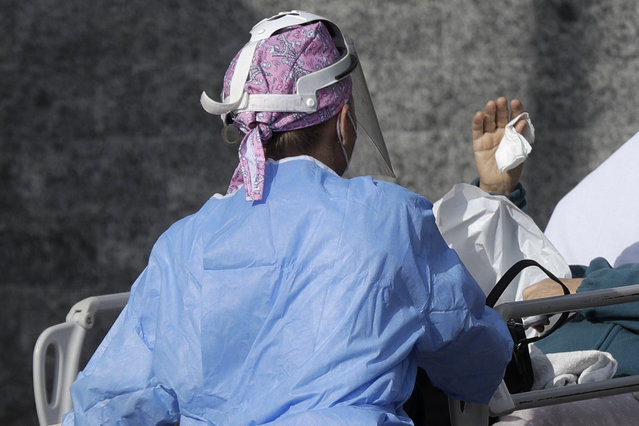 A patient waves to her relative as she is carried inside the first aid area of the Cardarelli hospital in Naples, Italy, Friday, November 13, 2020. Italian Government and health officials were analyzing data to see if the hard-strapped Campania region, which includes Naples, should be declared a red-zone. (Photo by Gregorio Borgia/AP Photo) 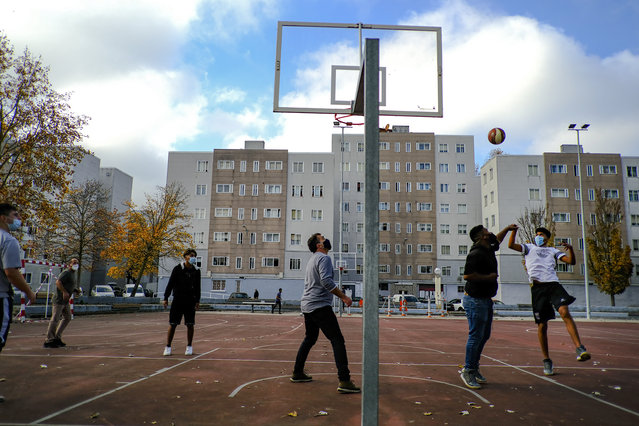 Residents keep a safe distance and wear face masks to prevent the spread of the coronavirus while playing basketball in a neighborhood outside of Pamplona, northern Spain, Friday, November 13, 2020. (Photo by Alvaro Barrientos/AP Photo) 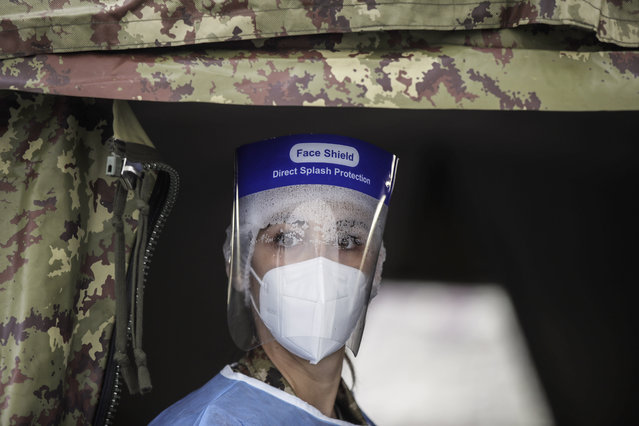 Army medical personnel, wearing a protective suit, works at a quick coronavirus testing area which was set up to ease the pressure on hospital emergency wards, following the surge of COVID-19 case numbers, in Milan, Italy, Friday, November 13, 2020. The central government has put under partial lockdown some regions where the rate of virus transmission is particularly high and hospitals are running out of staff or space for patients, including in Lombardy, the northern region where the pandemic first erupted in Italy in February. (Photo by Luca Bruno/AP Photo) 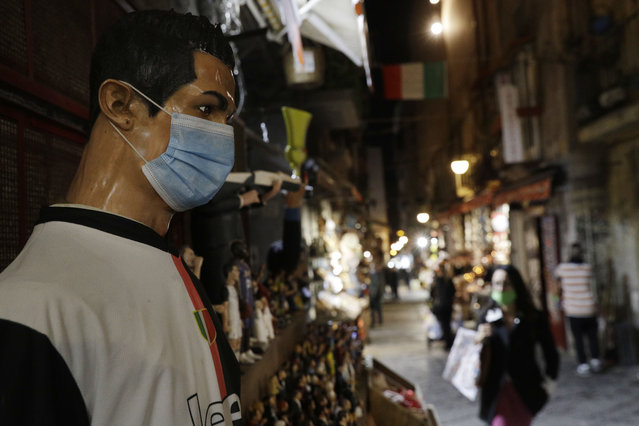 A statue of soccer star Cristiano Ronaldo, wearing a face mask, is displayed at a nativity scenes shop in San Gregorio Armeno street in Naples, Italy, Friday, November 13, 2020. The regions of Campania and Tuscany were designated red zone on Friday, signaling the dire condition of a hospitals struggling with a surge of new admissions. (Photo by Gregorio Borgia/AP Photo) 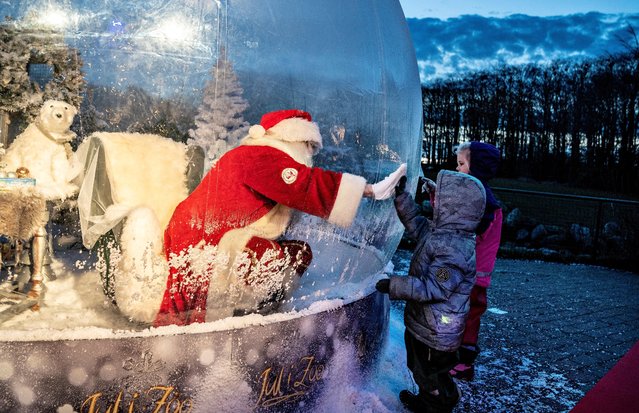