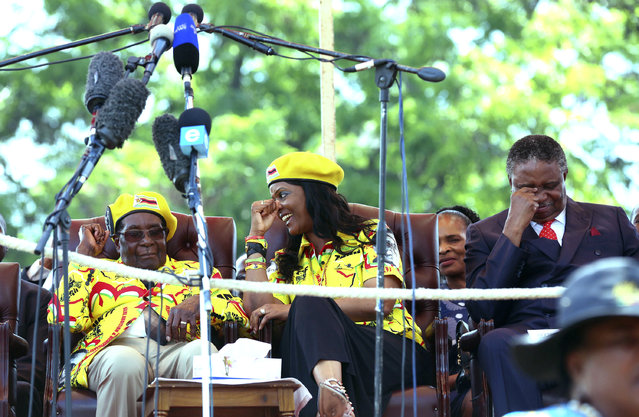 Zimbabwe's President Robert Mugabe, left, speaks with his wife Grace while his Vice President Phelekezela Mpoko, right, looks on during a solidarity rally in Harare, Wednesday, November 8, 2017. Zimbabwe's president said Wednesday he fired his deputy and longtime ally for scheming to take power, including by consulting witch doctors. Now Mugabe's wife appears poised for the role. (Photo by AP Photo/Stringer) 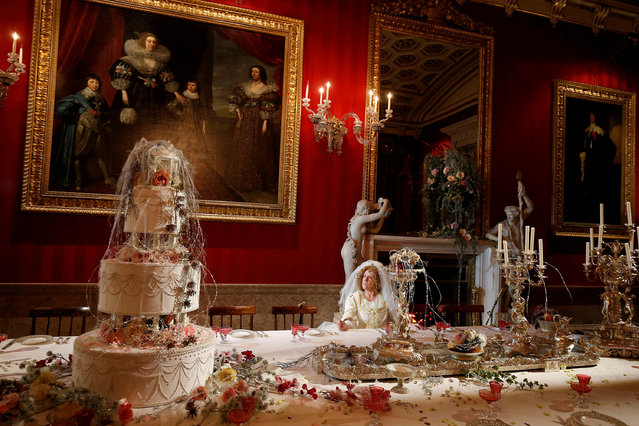 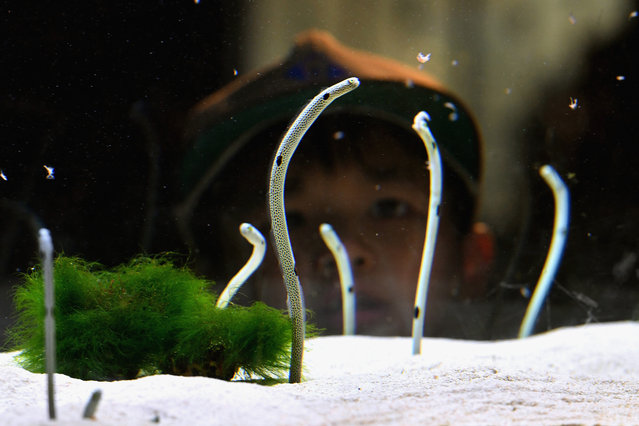 A boy watches spotted garden eels at Kyoto Aquarium on November 7, 2017 in Kyoto, Japan. The eel exhibition begins ahead of November 11, the date has been recognised as “Spotted Garden Eel Day” by the Japan Anniversary Association. (Photo by The Asahi Shimbun via Getty Images) 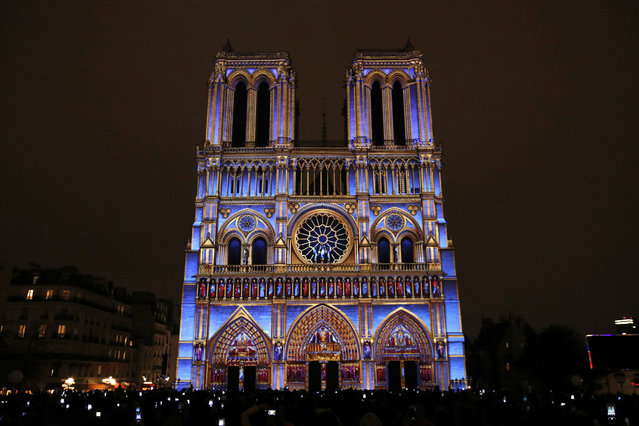 The Notre Dame cathedral is illuminated during a light show called “Dame de Coeur” to celebrate the centenary of the First World War, in Paris, Wednesday, November 8, 2017. (Photo by Christophe Ena/AP Photo) 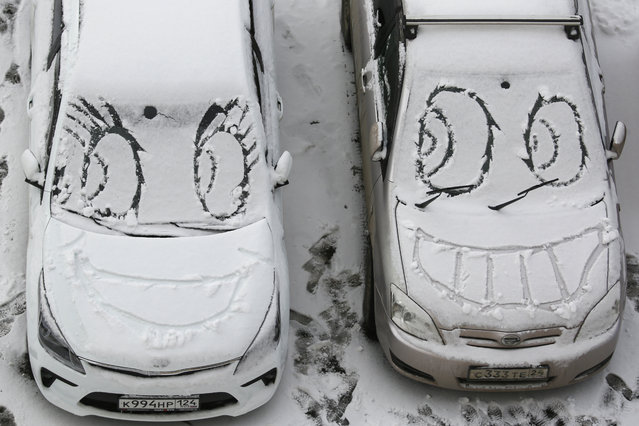 Faces are scrawled on cars covered with snow near a residential building in Krasnoyarsk, Russia November 8, 2017. (Photo by Ilya Naymushin/Reuters) 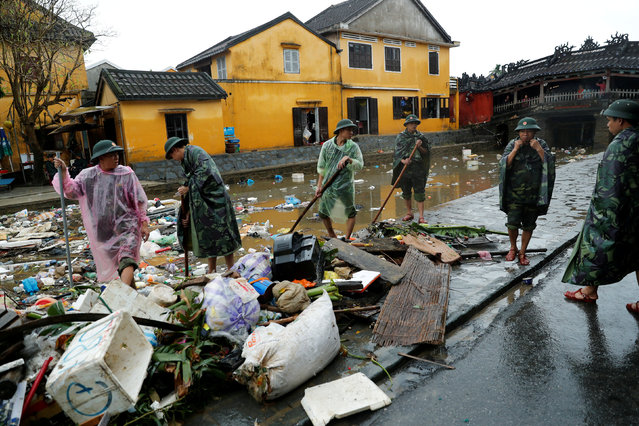 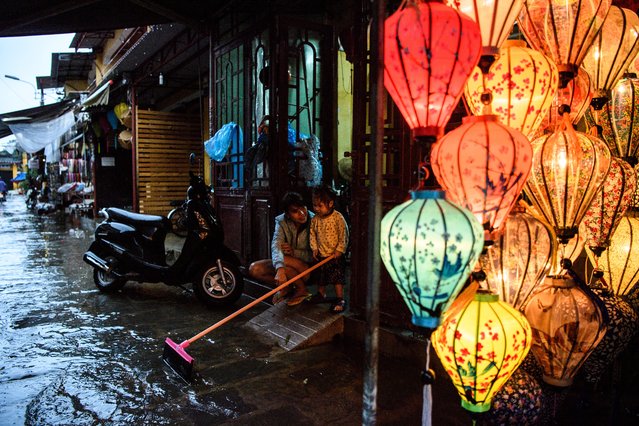 A mother and her child sit in their house entrance next to a lantern shop in the town of Hoi An on November 8, 2017 following days of heavy rains after Typhoon Damrey hit the coast. The death toll from typhoon downpours and floods wreaking havoc along Vietnam's south-central coast had risen to 69, authorities said on November 7, as the country prepares to host the world leaders' Asia-Pacific Economic Cooperation (APEC) Summit in Danang, just north of Hoi An. (Photo by Anthony Wallace/AFP Photo) 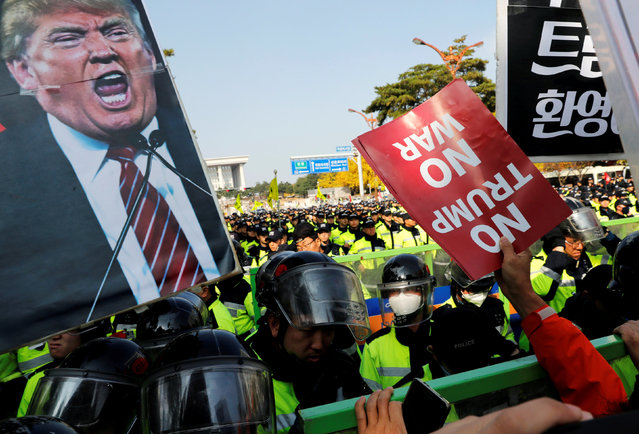 Anti-Trump protesters hold up signs in front of police officers near the South Korean National Assembly where U.S. President Donald Trump made a speech, in Seoul, South Korea, November 8, 2017. (Photo by Kim Kyung-Hoon/Reuters) 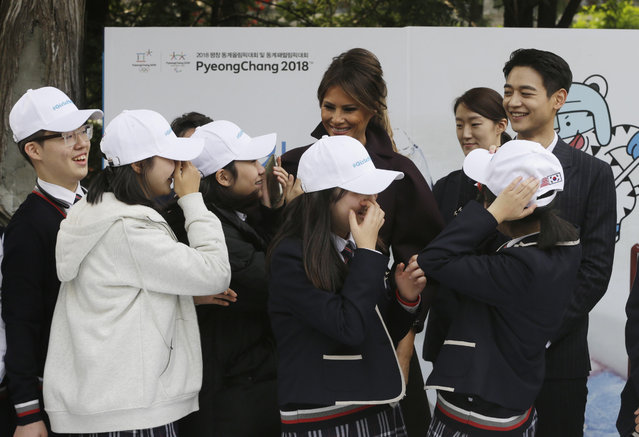 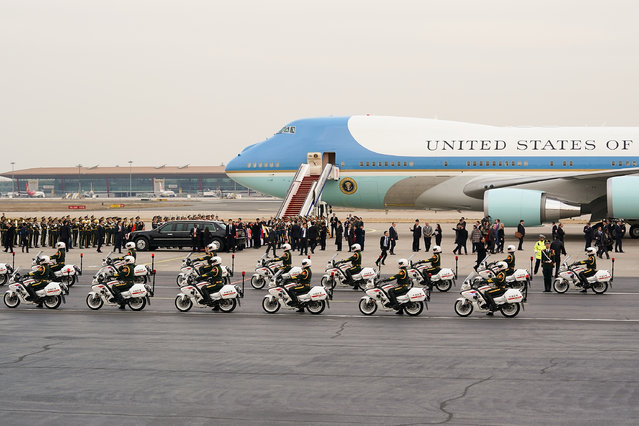 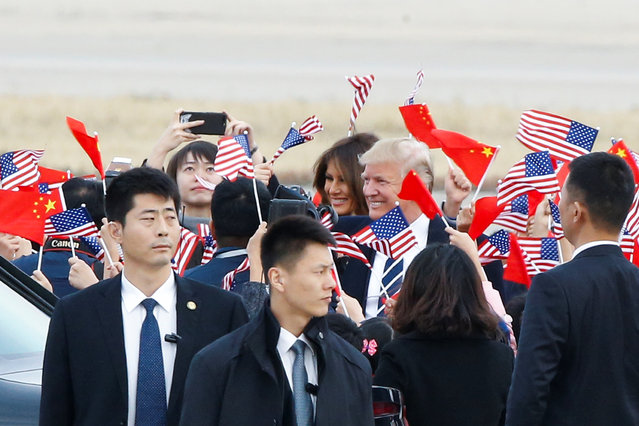 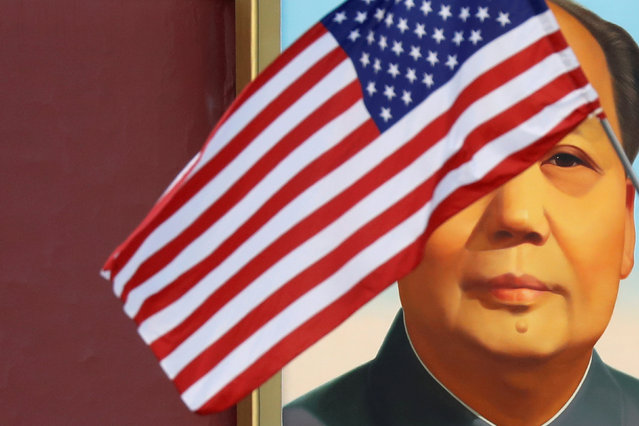 A U.S. flag flutters in front of a portrait of the late Chinese Chairman Mao Zedong at Tiananmen gate during the visit by U.S. President Donald Trump to Beijing, China, November 8, 2017. (Photo by Damir Sagolj/Reuters) 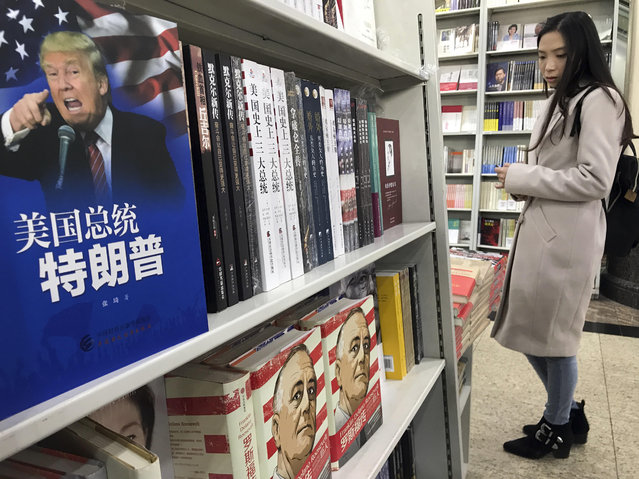 A book with the title “American President Trump” is placed on a shelf for a photo at a section of a book store on foreign leaders in Beijing, China, Tuesday, November 7, 2017. U.S. President Donald Trump's agenda in Beijing this week is expected to be led by the standoff over North Korea's nuclear weapons and demands that China do more to balance trade with America. (Photo by Ng Han Guan/AP Photo) 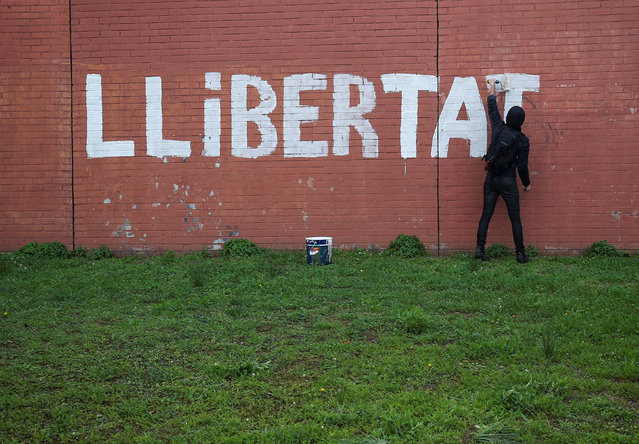 A man paints the word “Freedom” on a wall as protesters blocked a ring road in Barcelona during a partial regional strike called by pro-independence parties and labour unions in Barcelona, Spain, November 8, 2017. (Photo by Albert Gea/Reuters) 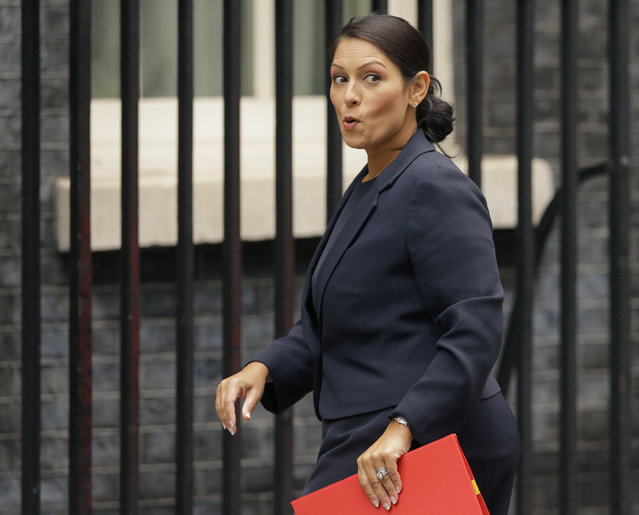 In this Tuesday, October 10, 2017 file photo, Britain's Secretary of State for International Development Priti Patel reacts to a question from the media as she arrives for a cabinet meeting at 10 Downing Street in London. Running for election mere months ago, British Prime Minister Theresa May's slogan was “strong and stable government”. The phrase sounds cruelly ironic now, with several senior members of May's Cabinet under fire for missteps or under investigation for alleged sexual misconduct. The latest bad news came when it emerged this week that International Development Secretary Priti Patel held 12 meetings with Israeli groups and officials, including Prime Minister Benjamin Netanyahu, while she was on vacation in the country in August – and that she hadn't told the prime minister or colleagues about it. (Photo by Alastair Grant/AP Photo) 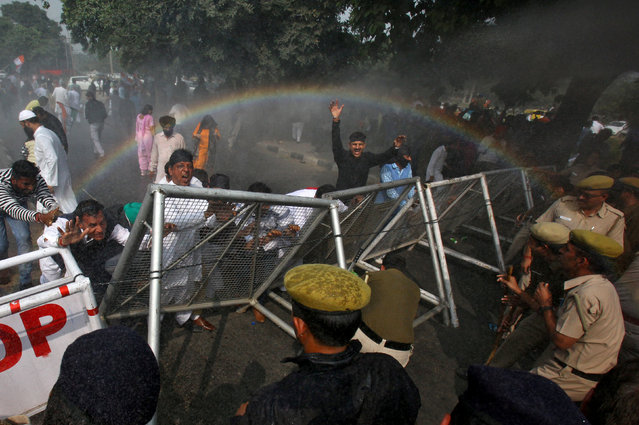 A rainbow forms as police use water cannon to disperse demonstrators during a protest, organised by India's main opposition Congress party, to mark a year since demonetisation was implemented by Prime Minister Narendra Modi, in Chandigarh, India November 8, 2017. (Photo by Ajay Verma/Reuters) 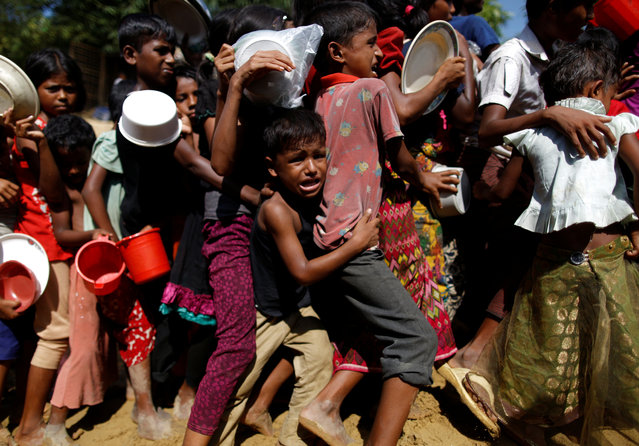 Rahim Ullah, 5, (C) a Rohingya refugee boy cries as he struggles to stay in a queue while waiting to receive food outside the distribution center in Palongkhali makeshift refugee camp in Cox's Bazar, Bangladesh on November 7, 2017. (Photo by Navesh Chitrakar/Reuters) 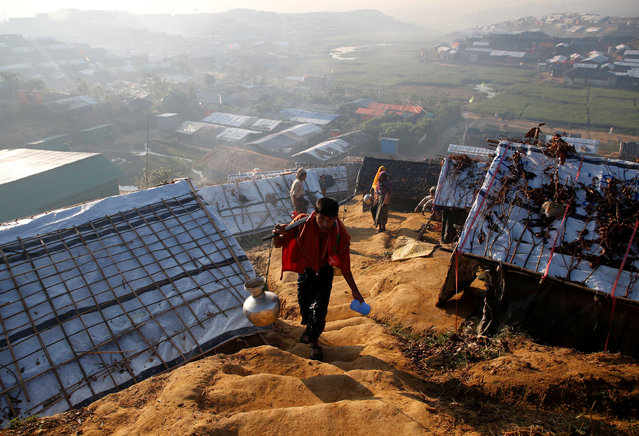 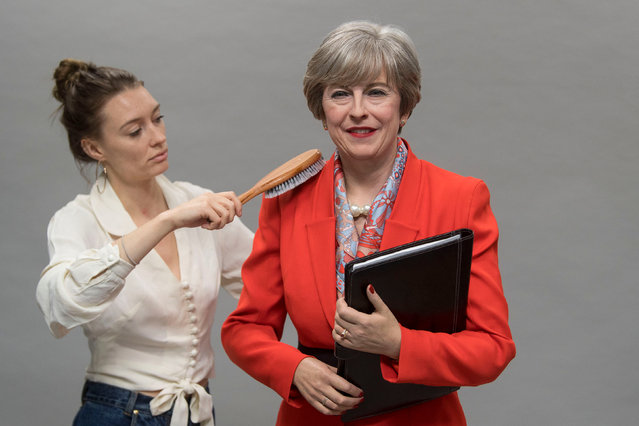 The finishing touches are made to a new wax figure of Theresa May at Madame Tussauds in London, England on November 7, 2017. (Photo by Victoria Jones/PA Wire) 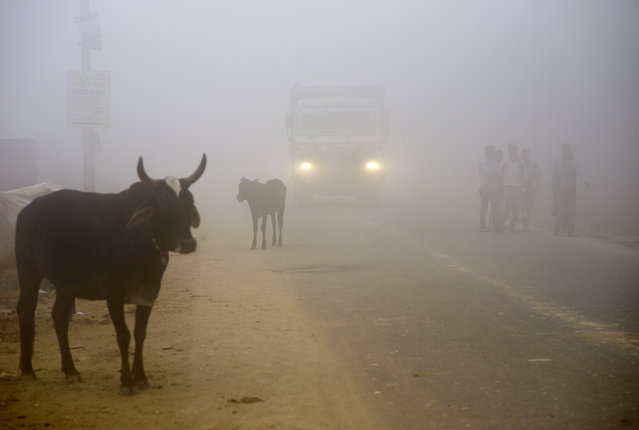 Cows stand by the side of a road as a truck drives with lights on through smog in Greater Noida, near New Delhi, India, Wednesday, November 8, 2017. A thick gray haze enveloped India's capital on Wednesday as air pollution hit hazardous levels. The Indian Medical Association said New Delhi was in the midst of a “public health emergency” and appealed to the city government to halt sports and other outdoor activities in schools. (Photo by R.S. Iyer/AP Photo) 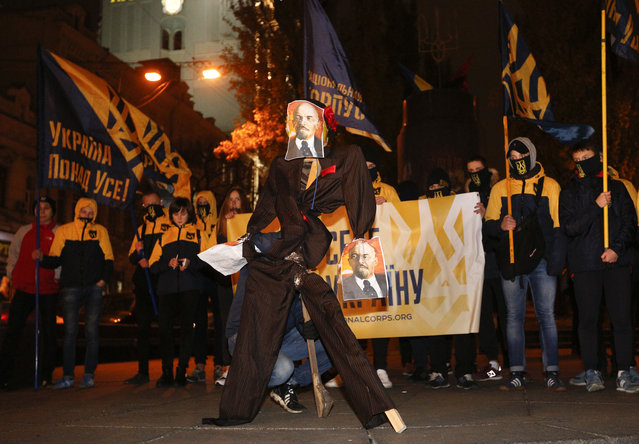 Volunteers of the Azov Civil Corps prepare to set fire to an effigy of Vladimir Lenin as they marking the 100th anniversary of the Bolshevik revolution in downtown Kiev, Ukraine, Tuesday, November 7, 2017. Poster in their hands reads 'Change your self, change your country'. (Photo by Efrem Lukatsky/AP Photo) 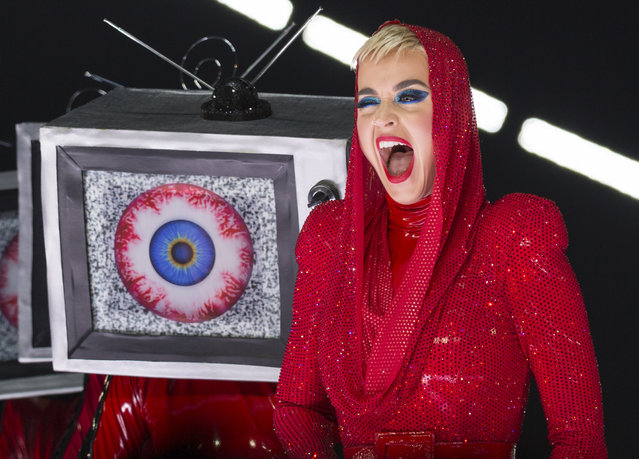