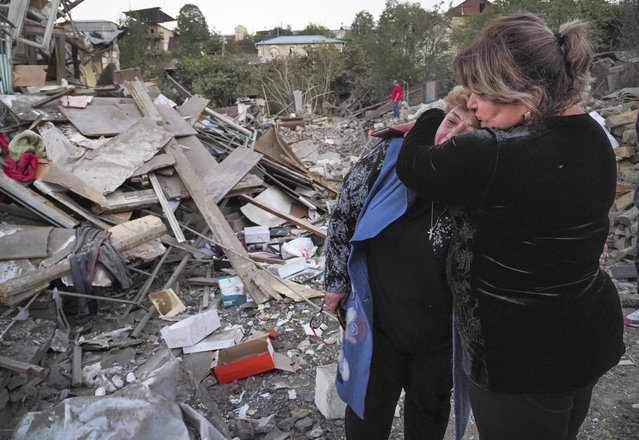 A neighbour comforts home owner, Lida Sarksyan, left, near her house destroyed by shelling from Azerbaijan's artillery during a military conflict in Stepanakert, the separatist region of Nagorno-Karabakh, Saturday, October 17, 2020. The latest outburst of fighting between Azerbaijani and Armenian forces began Sept. 27 and marked the biggest escalation of the decades-old conflict over Nagorno-Karabakh. The region lies in Azerbaijan but has been under control of ethnic Armenian forces backed by Armenia since the end of a separatist war in 1994. (Photo by AP Photo/Stringer) 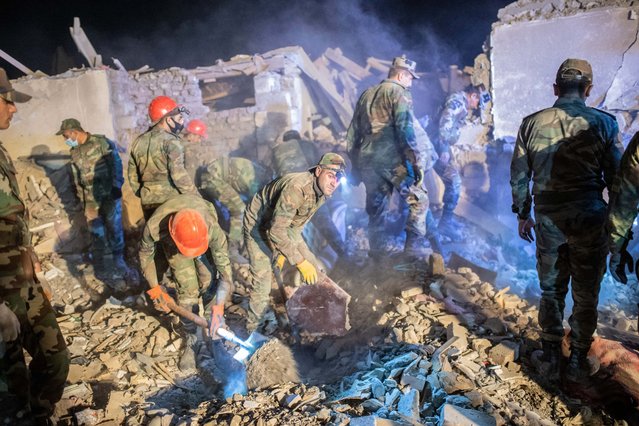 Rescue teams sift through rubble at a site hit by a missile strike during fighting over the breakaway region of Nagorno-Karabakh, in the city of Ganja, Azerbaijan early on October 17, 2020. A missile strike levelled several homes in Azerbaijan's second city of Ganja on October 17, with one resident telling AFP he saw seven victims pulled out of the rubble. (Photo by Bulent Kilic/AFP Photo) 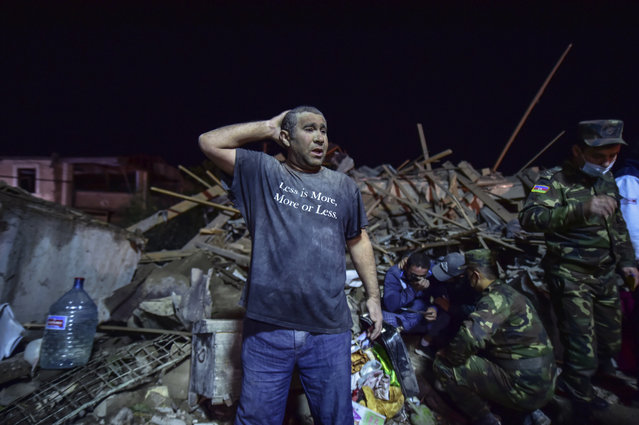 People react as Azerbaijani soldiers and firefighters were trying to save survivors from destroyed houses in a residential area in Ganja, Azerbaijan's second largest city, near the border with Armenia, after rocket fires overnight by Armenian forces for second time in a week, early Saturday, October 17, 2020. A Russian attempt to broker a cease-fire to end the worst outbreak of hostilities over the disputed region of Nagorno-Karabakh in more than a quarter-century has failed to get any traction, with rivals Azerbaijan and Armenia trading blame for new attacks. (Photo by Ismail Coskun/IHA via AP Photo) 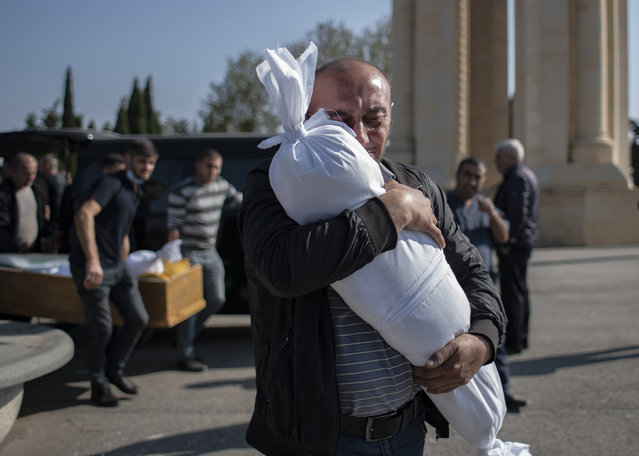 Timur Haligov, an Azerbaijani Turkish father embraces the body of his 10-month-old baby girl, Narin, who was killed by overnight shelling by Armenian forces. during a funeral ceremony, in Ganja, Azerbaijan, Saturday, October 17, 2020. Azerbaijan has accused Armenia of striking its second-largest city with a ballistic missile that killed at least 13 civilians and wounded 50 others in a new escalation of their conflict over Nagorno-Karabakh. (Photo by Can Erok/DHA via AP Photo) 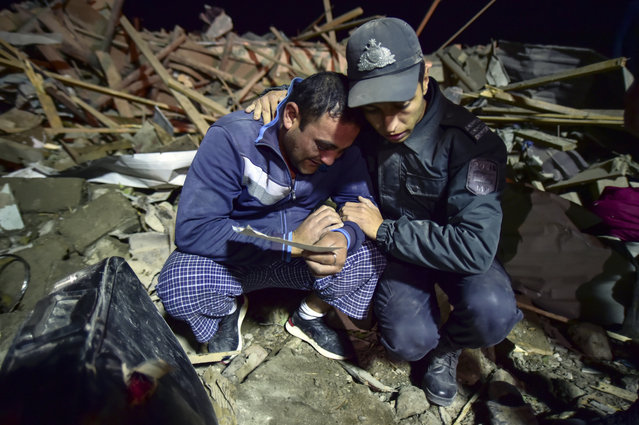 An Azerbaijani soldier tries to comfort a man amongst debris as they try to find survivors from destroyed houses in a residential area in Ganja, Azerbaijan's second largest city, near the border with Armenia, after rocket fire overnight by Armenian forces for second time in a week, early Saturday, October 17, 2020. (Photo by Ismail Coskun/IHA via AP Photo) 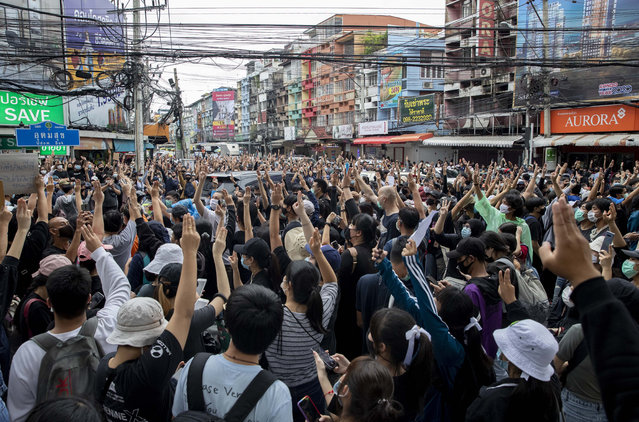 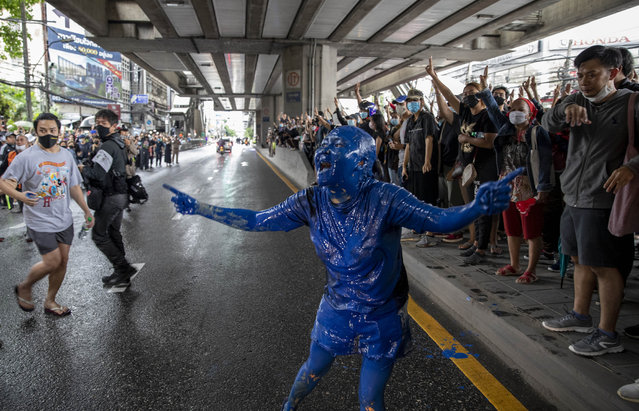 A pro-democracy protester covered in blue paint gestures on a road during a protest in Udom Suk, suburbs of Bangkok, Thailand, Saturday, October 17, 2020. (Photo by Gemunu Amarasinghe/AP Photo) 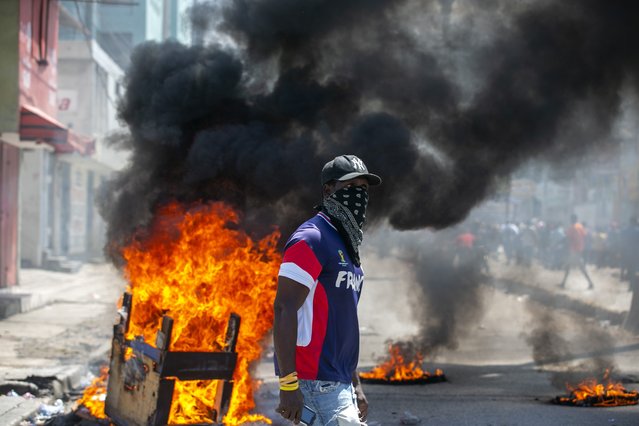 A protester walks past burning barricades during a protest demanding the resignation of President Jovenel Moise in Port-au-Prince, Haiti, Saturday, October 17, 2020. The country is currently experiencing a political impasse without a parliament and is now run entirely by decree under Moise. (Photo by Dieu Nalio Chery/AP Photo) 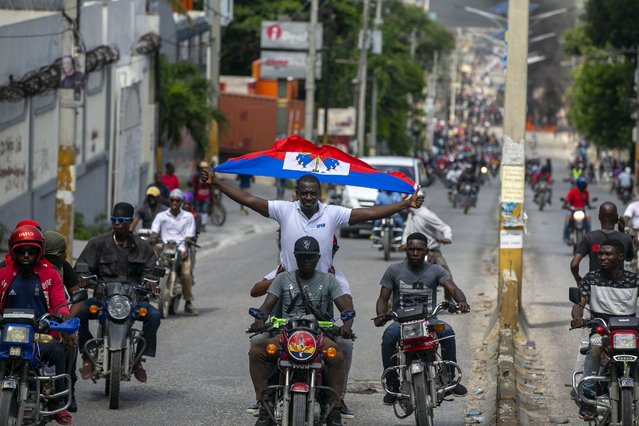 A protester holds up a Haitian national while riding on a motorcycle during a protest to demand the resignation of President Jovenel Moise in Port-au-Prince, Haiti, Saturday, October 17, 2020. (Photo by Dieu Nalio Chery/AP Photo) 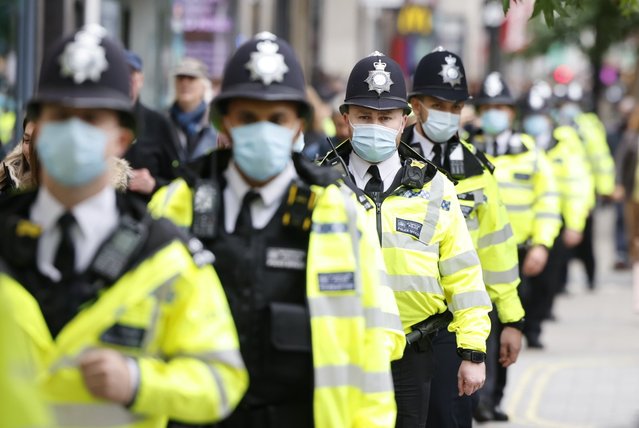 Metropolitan Police officers escort a protest against coronavirus (Covid-19) measures and vaccine despite social gatherings of more than six people are not be allowed within Covid-19 measures in London, United Kingdom on October 17, 2020. (Photo by London News Pictures/The Sun) 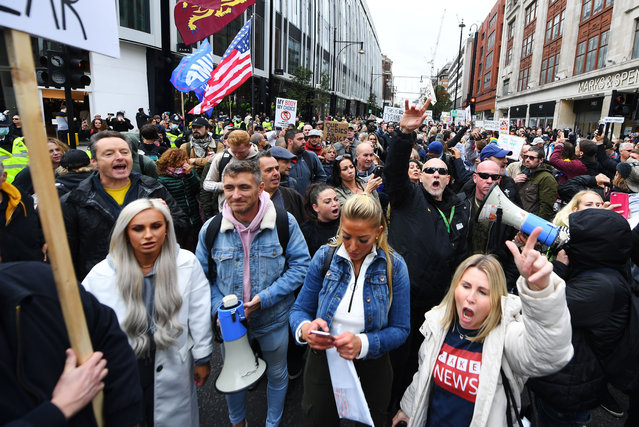 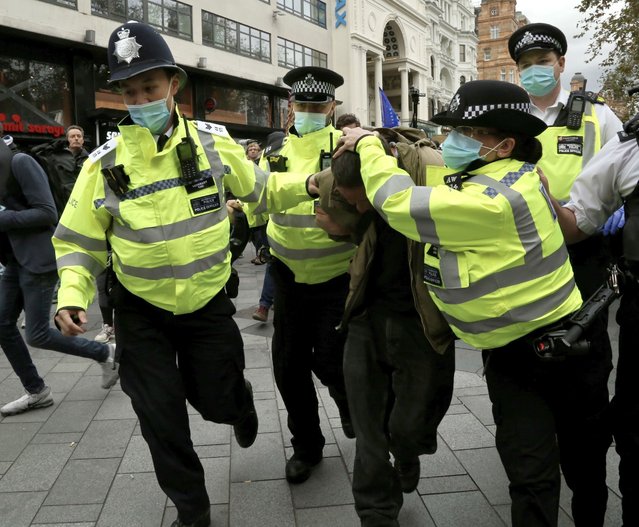 Police officers take into custody some protesters as members of StandUpX stage a protest against coronavirus (Covid-19) measures and vaccine despite social gatherings of more than six people are not be allowed within Covid-19 measures in London, United Kingdom on October 17, 2020. (Photo by Hasan Esen/Anadolu Agency via Getty Images) 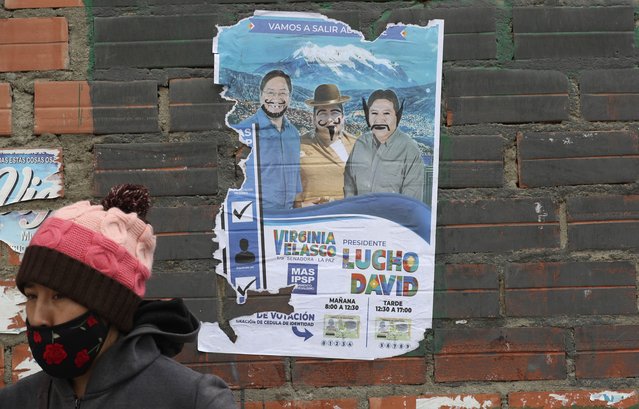 A child walks past a defaced election poster promoting presidential candidate Luis Arce representing the Movement Towards Socialism political party better known by its acronym MAS, in El Alto, Bolivia, Saturday, Octoner 17, 2020. Sunday's presidential election gives Bolivians a chance for a political reset as they struggle with the dramatic costs of the COVID-19 pandemic. (Photo by Martin Mejia/AP Photo) 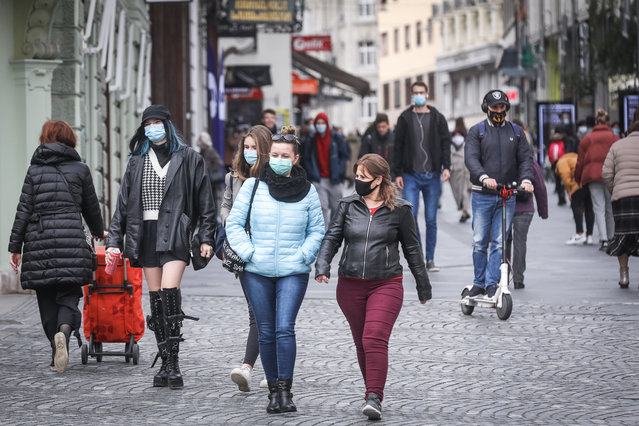 People wearing masks are seen outside as the government enacted a ban on non-essential travels in seven red-listed regions with declaring additional restrictive measures to contain the spread of coronavirus (Covid-19) in Ljubljana, Slovenia on October 16, 2020. These seven regions are the Central Slovenia, Gorenjska, Koroska, Zasavje, Posavje, Savinjska and South-eastern Slovenia. Face masks will also be mandatory outdoors as well as indoors in red regions. These additional measures will be controlled by official authorities and fines will be imposed in case of violations. (Photo by Ales Beno/Anadolu Agency via Getty Images) 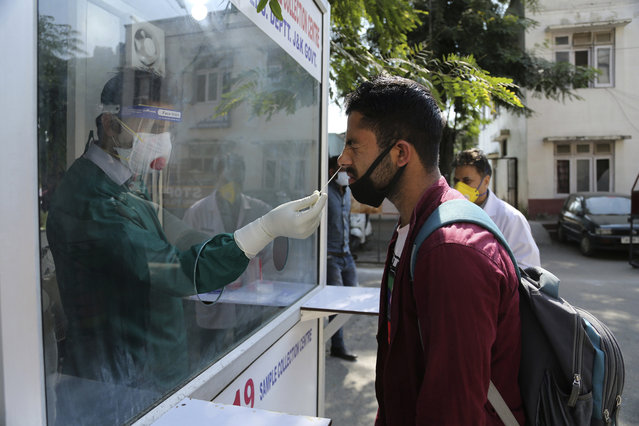 A health worker collects a nasal swab sample to test for COVID-19 at a government hospital in Jammu, India, Saturday, October 17, 2020. The Health Ministry on Saturday reported 62,212 new cases in the past 24 hours, raising India’s total to more than 7.4 million, second in the world behind the U.S. (Photo by Channi Anand/AP Photo) 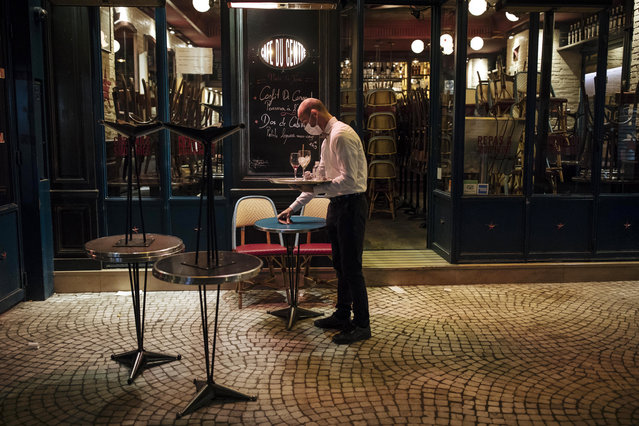 A waiter closes a bar terrace in Paris, Saturday October 17, 2020. French restaurants, cinemas and theaters are trying to figure out how to survive a new curfew aimed at stemming the flow of record new coronavirus infections. The monthlong curfew came into effect Friday at midnight, and France is deploying 12,000 extra police to enforce it. (Photo by Lewis Joly/AP Photo) 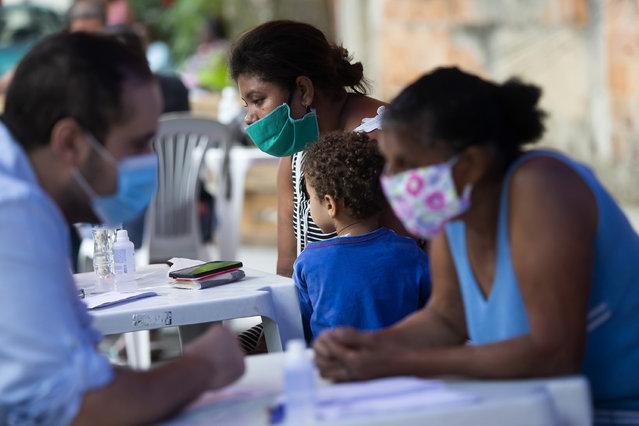 Residents receive medical attention during a campaign organized by doctors and volunteers amid the new coronavirus pandemic in the Chapadao favela in Rio de Janeiro, Brazil, Saturday, October 17, 2020. The residents received health assistance, protective face masks, legal advise and food as part of the campaign. (Photo by Bruna Prado/AP Photo) 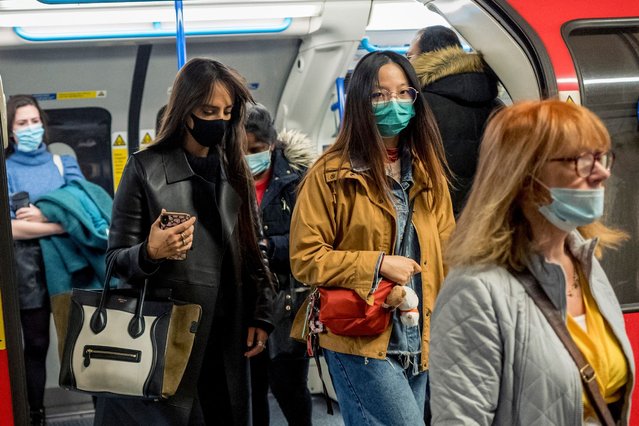 Commuters wear face-masks during morning rush hour on the Victoria Line of the London Underground in central London on October 16, 2020, as the number of novel coronavirus COVID-19 cases. Roughly half of England is now under tougher coronavirus restrictions, after the government on Thursday announced more stringent measures for London and seven other areas to try to cut surging numbers of cases. (Photo by Tolga Akmen/AFP Photo) 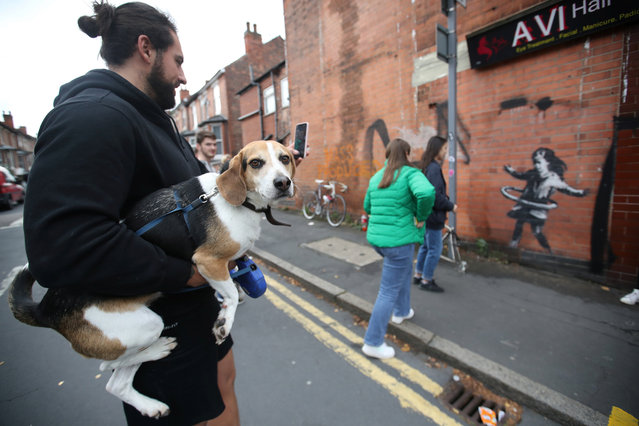 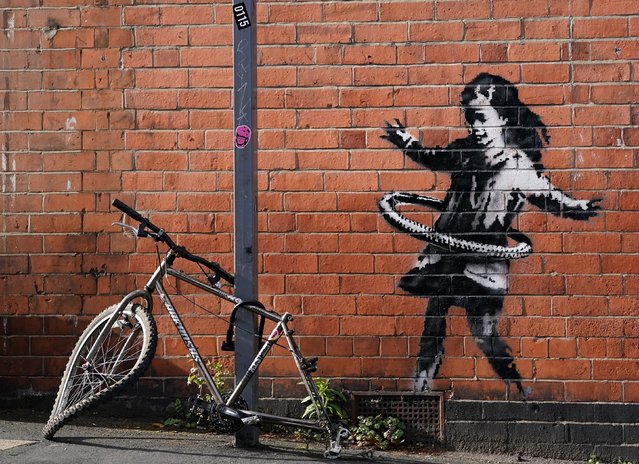 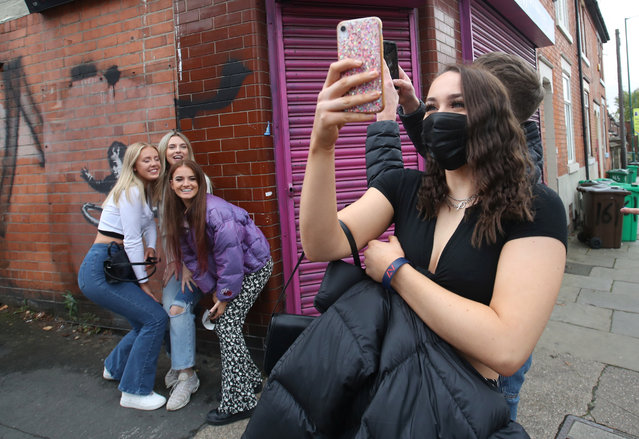