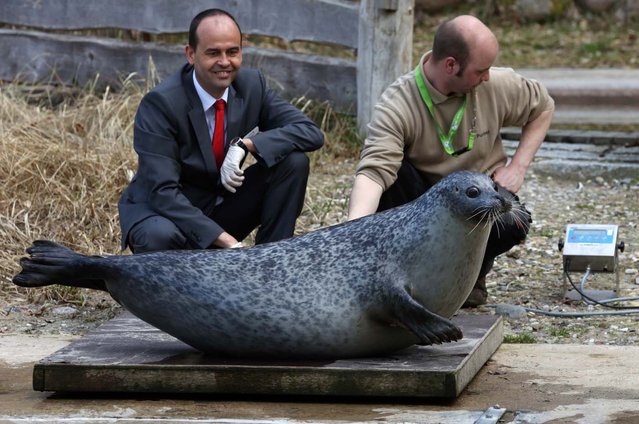 Seal “Susanne” sits on the scales as her keeper Lars Purbst (R) and Thomas Metzke from the sponsoring OstseeSparkasse bank look on, April 15, 2013 during a spring check at the Zoo in Rostock, northeastern Germany. “Susanne” is weighing 104 kilos. (Photo by Bernd Wuestneck/AFP Photo) 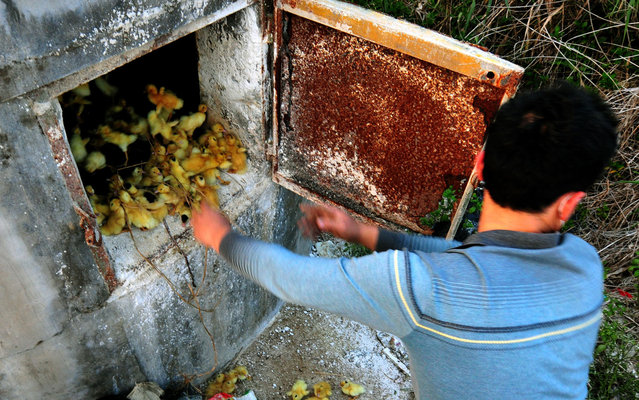 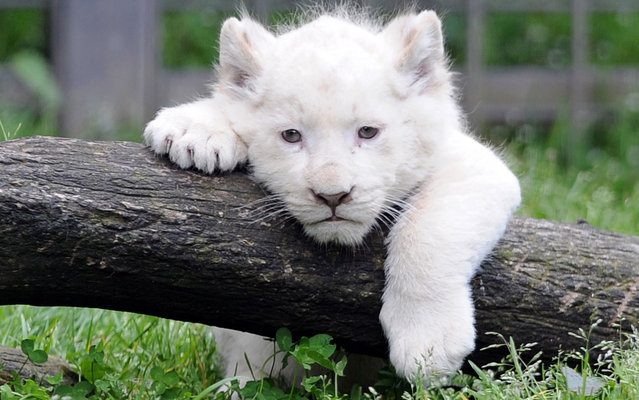 This picture taken on April 18, 2013 shows a white lion cub in his pen at the Pont-Scroff’s Zoo in Pont-Scorff, western France. Three lion cubs, two males and a female, were born on February 23 and were shown for the first time to the public on April 17. (Photo by Fred Tanneau) 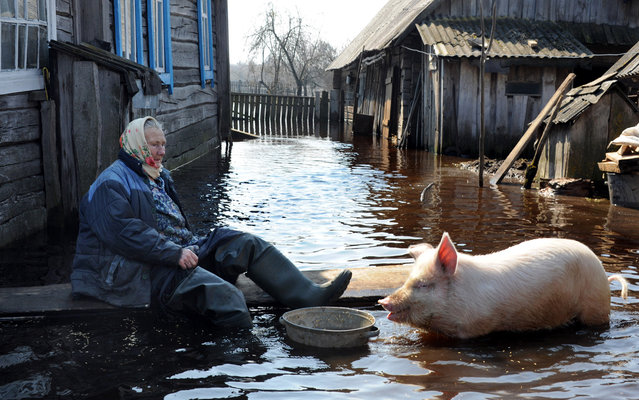 A woman feeds a pig in her yard during spring flood in the Belarus village of Snyadin near Pripyat river, some 300 km south of Minsk, on April 16, 2013. (Photo by Viktor Drachev/AFP Photo) 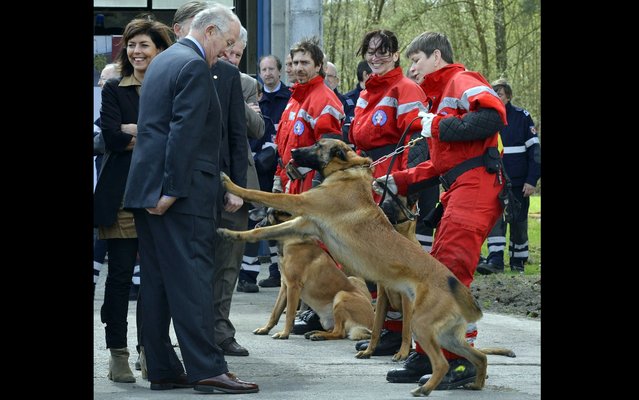 The Belgian King Albert II is “greeted” by a friendly dog during an official visit to the Team Identification of Disaster Victims, on April 18, 2013. (Photo by François Lenoir/Reuters) 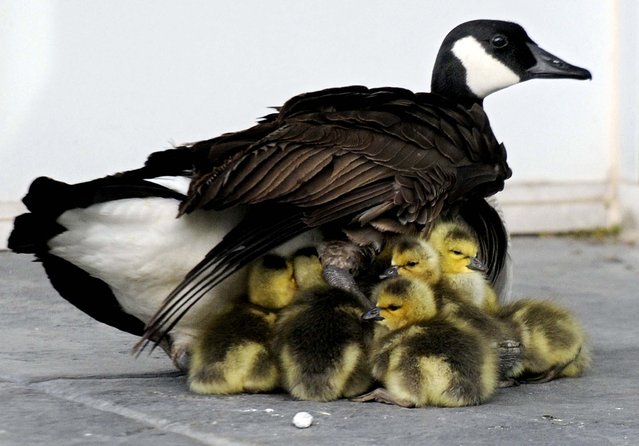 Goslings snuggle under the wing of a female Canada Goose in Vacaville, Californa, on April 13, 2013. (Photo by Joel Rosenbaum/The Reporter) 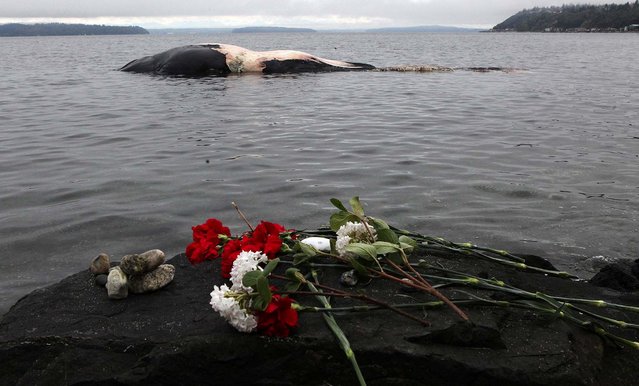 Flowers are left on a rock for a dead fin whale that washed ashore at Ed Munro Seahurst Park in Burien, Washington, on April 15, 2013. (Photo by Ellen M. Banner/The Seattle Times) 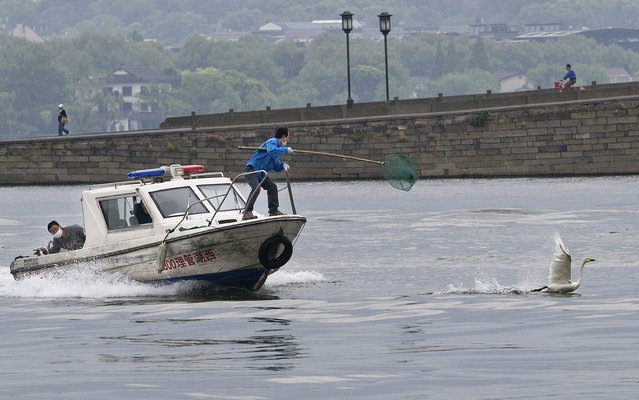 Authorities Park West Lake in Hangzhou, Zhejiang province (China), use a boat to chase and capture a goose, on April 16, 2013. The authorities decided to remove the birds from the lake and transfer them to a Zoo location because of the risks of avian influenza. (Photo by Chance Chan/Reuters) 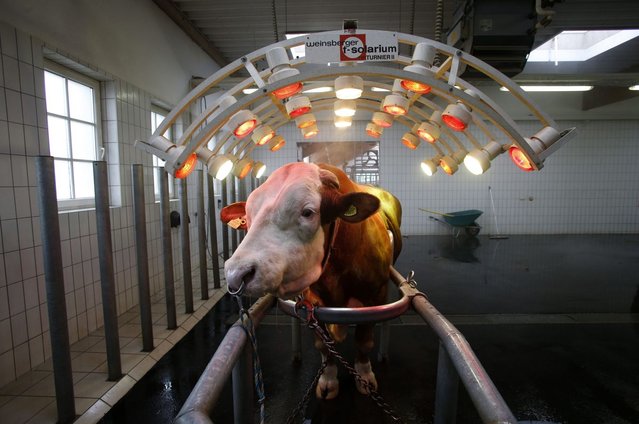 A breeding bull stands under infrared lights, used to relax his muscles, at an artificial insemination centre in the village of Hohenzell, Upper Austria April 13, 2013. The centre exports cattle semen to more than 52 countries worldwide. (Photo by Leonhard Foeger/Reuters) 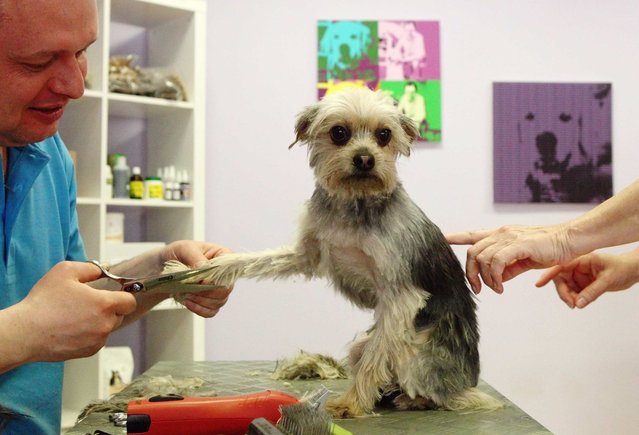 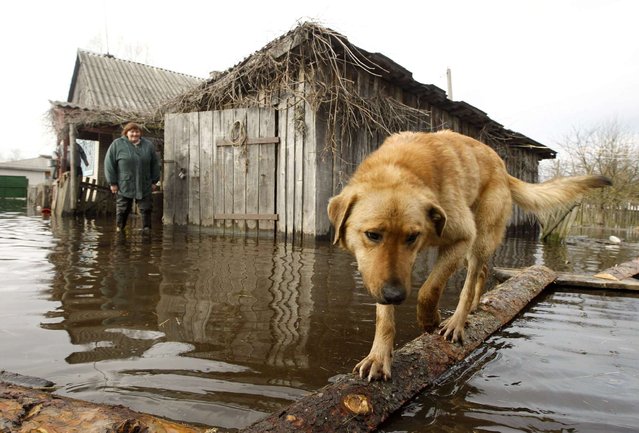 A dog and a woman are seen in a flooded courtyard as water from the Prypyat river overflows its banks during spring flooding in the village of Khlupin, some 270 km (168 miles) south of Minsk, Belarus, on April 15, 2013. (Photo by Vasily Fedosenko/Reuters) 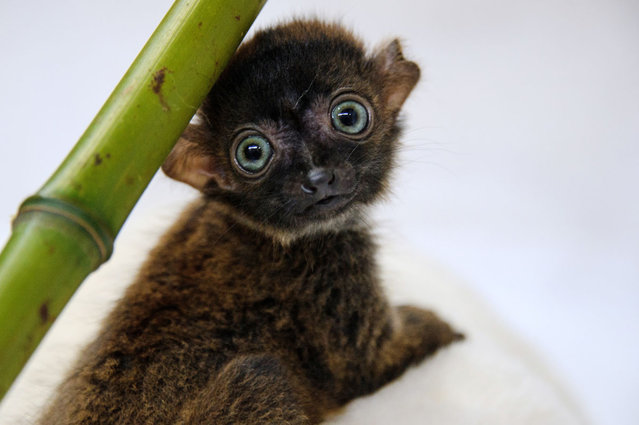 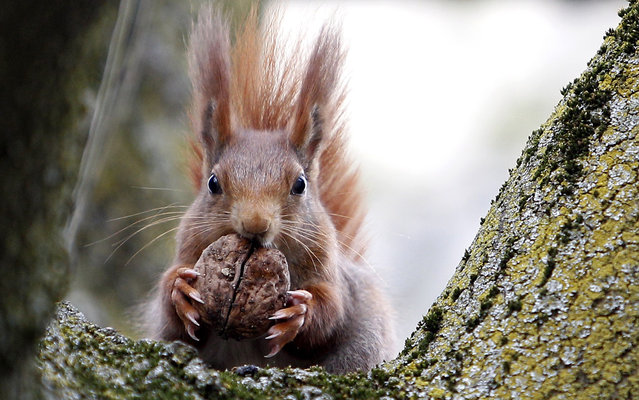 A red squirrel sits in a tree as it holds a walnut in Frankfurt's city centre April 19, 2013. (Photo by Lisi Niesner/Reuters) 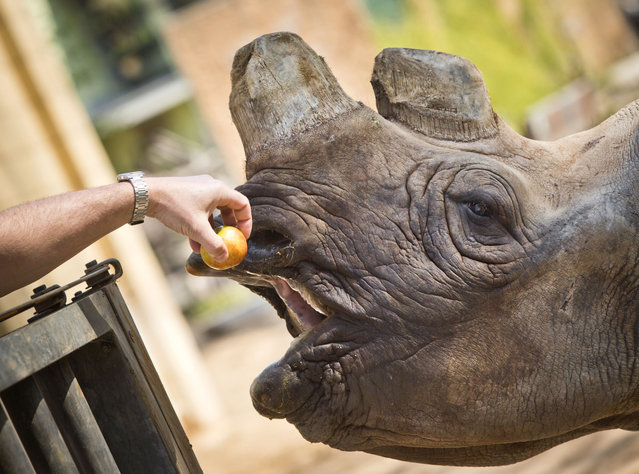 Black rhino Tororo gets an apple from her keeper on April 18, 2013 at the Zoo in Frankfurt am Main, western Germany. (Photo by Frank Rumpenhorst) 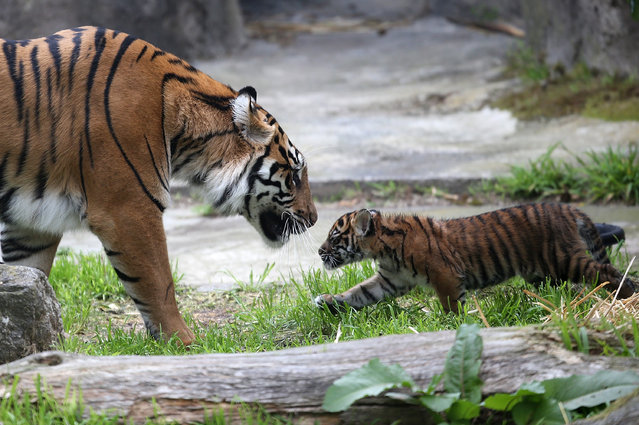 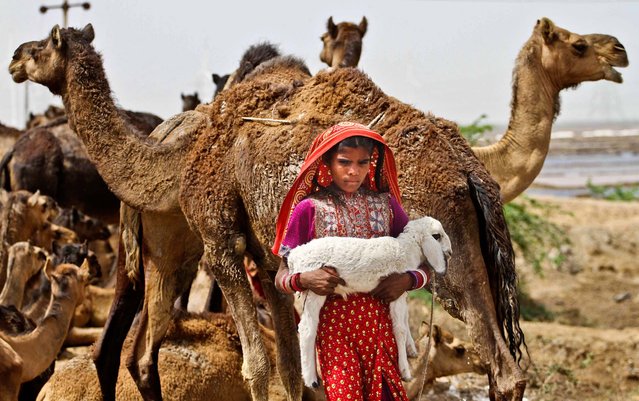 A girl carries a lamb as she walks past herds of camels on a highway in the Kutch district of Gujarat state, India, on April 17, 2013. (Photo by Ajit Solanki/Associated Press) 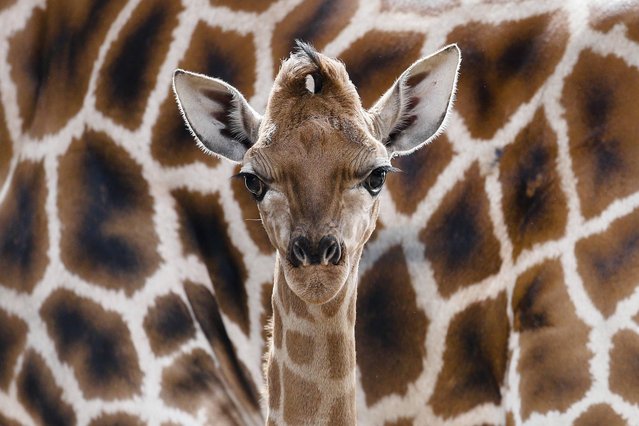 Eric the new born Rothschild giraffe stands in front the mother Lotti during its first presentation for public at the Tierpark Zoo in Berlin, Friday, April 19, 2013. (Photo by Markus Schreiber/AP Photo) 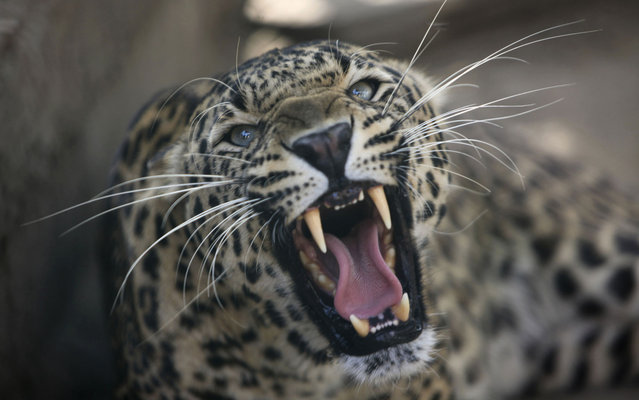 Leopard roars inside his enclosure at the wildlife park in Jammu, India, on April 18, 2013. (Photo by Channi Anand/AP Photo) 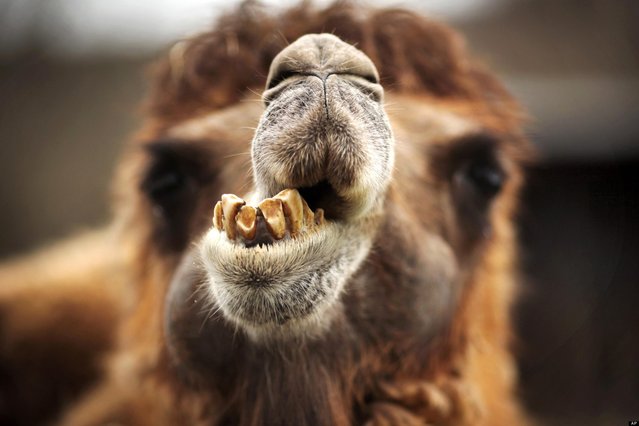 A Bactrian camel waits in its enclosure in the Opel Zoo, in Kronberg, near Frankfurt, central Germany, Sunday April 14, 2013. (Photo by Fredrik Von Erichsen/AP Photo/Dpa) 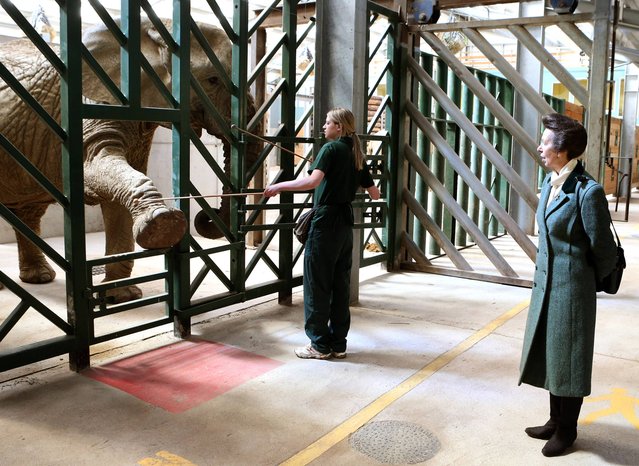 The Princess Royal watches keeper Ailsa West as she trains Mondula the elephant after she officially opened the new elephant habitat at Blair Drummond Safari Park near Stirling, on April 19, 2013. She last visited the park in 1972. (Photo by Andrew Milligan /PA Wire) 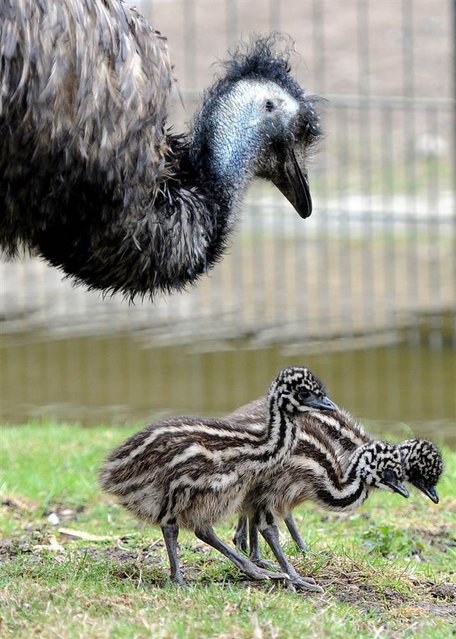 Emu chicks walk through their compound at the Zoological Garden in Berlin, Germany, on April 16, 2013. (Photo by Britta Pedersen/AFP Photo) 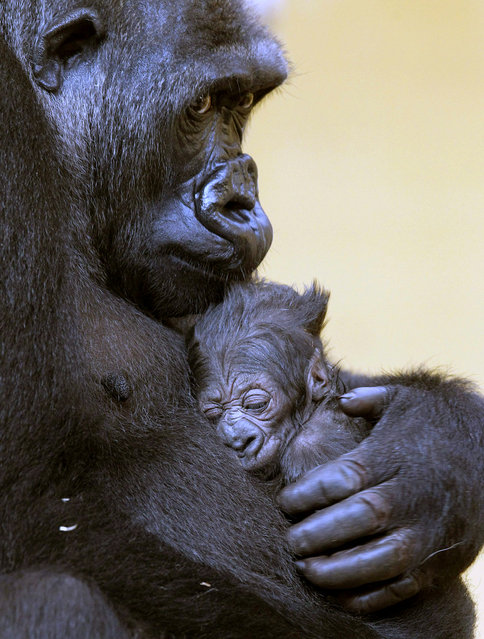 The gorilla “Moja” holds his baby after his birth at the Nature Park of Cabarceno in Cantabria, northern of Spain, April 16, 2013. This is the second gorilla that is born in this natural reserve. (Photo by Esteban Cobo/EPA) 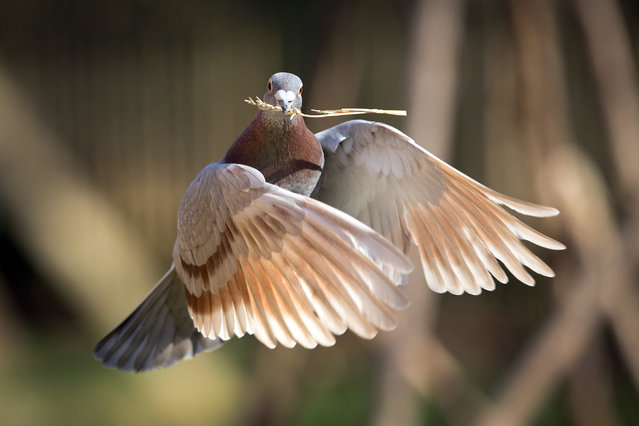 A homing pigeon carries a piece of straw to fatten it's nest in Lexington, Ky., on April 14, 2013. Racing pigeon fanciers believe that nest-building helps their birds create a strong bond with home and their mate. (Photo by David Stephenson) 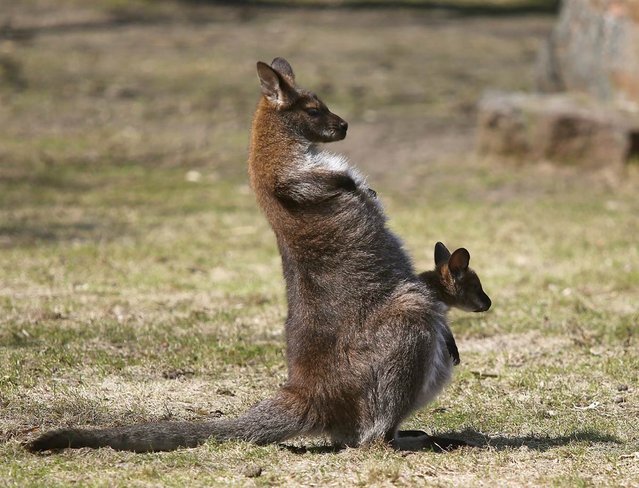 A kangaroo stands with its baby in its pouch at the Zoo in Warsaw, Poland, on April 15, 2013. (Photo by Tomasz Gzell/EPA) 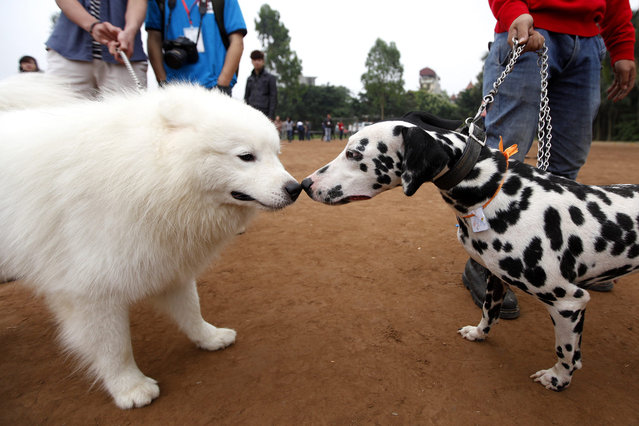 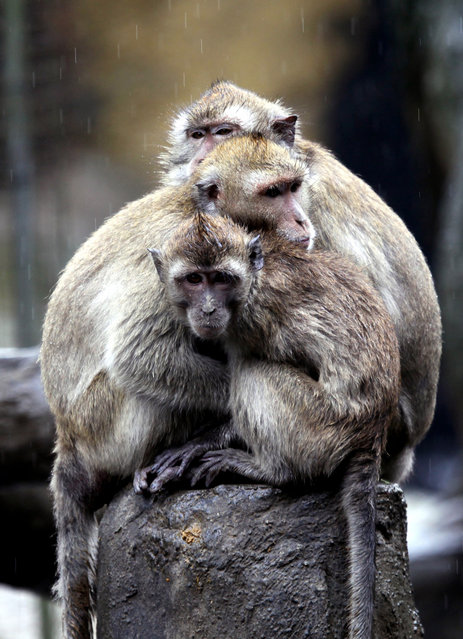 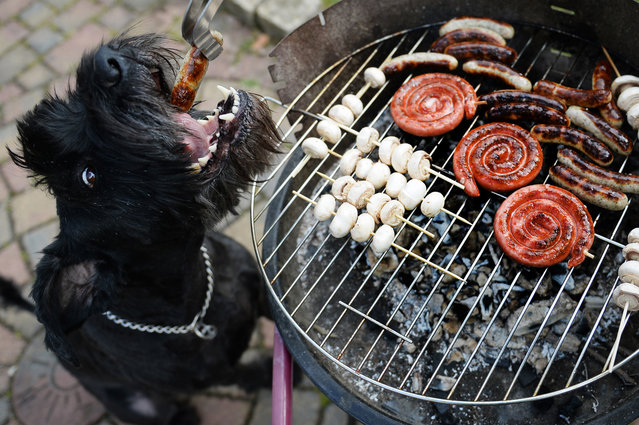 Dog “Chili” gets a grilled sausage during the first barbecue of this spring in Busbach, southern Germany, on April 14, 2013. Temperatures in parts of the country reached 20 degrees Celsius and even more. (Photo by David Ebener/AFP Photo) 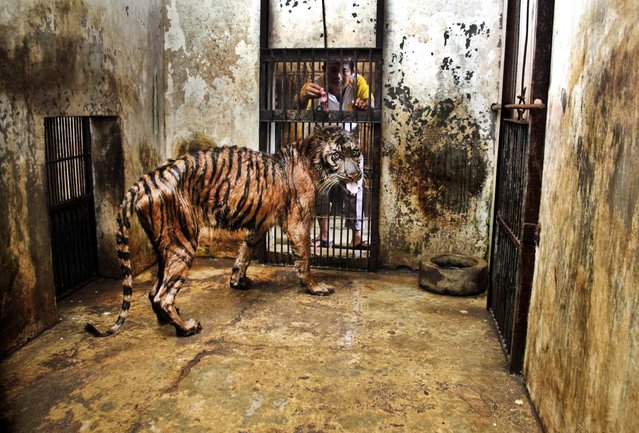 A keeper tries to feed Melanie, a 15-year-old female Sumatran tiger that has been suffering from digestive disorder for five years at Surabaya Zoo in Surabaya, Indonesia, on April 15, 2013. An official says Melanie is in critical condition at Indonesia's largest and problem-plagued zoo and may have to be euthanized (Photo by Associated Press) 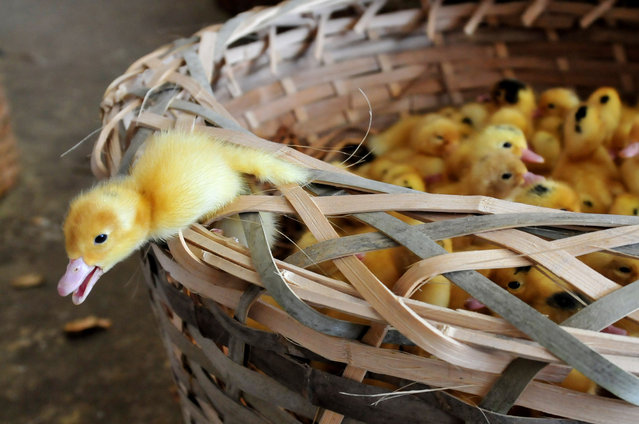