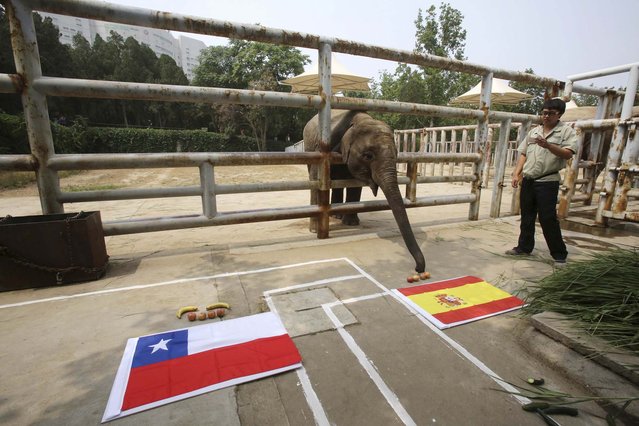 Four-year-old Asian elephant Yalu, reaches for the food in front of a Spanish national flag as it takes part in a World Cup match prediction event ahead of the 2014 Brazil World Cup group match between Spain and Chile, at a zoo in Jinan, Shandong province June 18, 2014. (Photo by Reuters/Stringer) 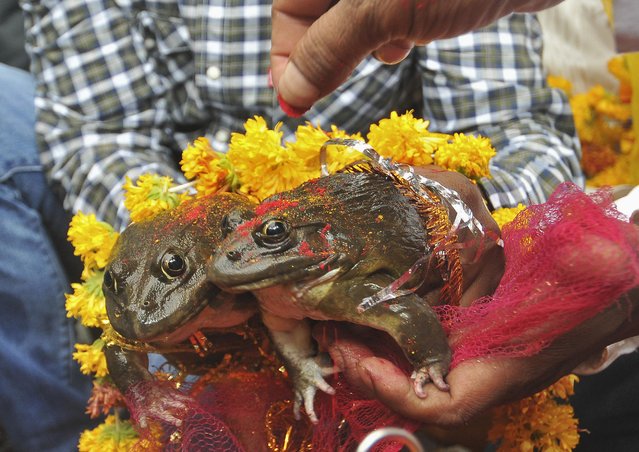 People hold frogs as they solemnise a frog marriage in the central Indian city of Nagpur June 12, 2014. The frog marriage is a traditional ritual observed by the rural folk to appease the gods to bring in rain and ensure a good harvest. (Photo by Reuters/Stringer) 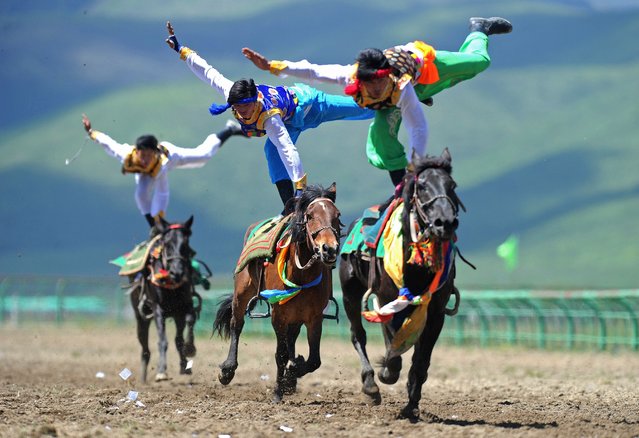 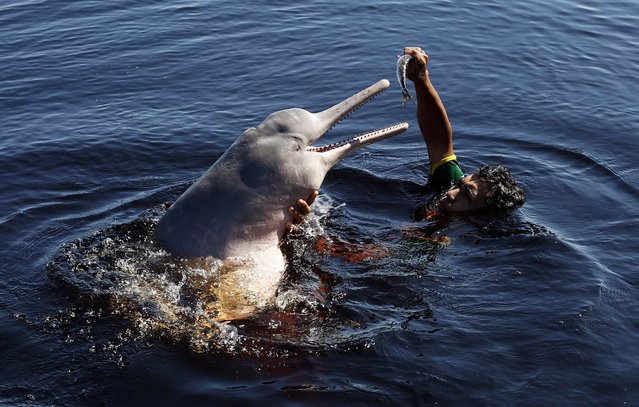 A Brazilian villager plays with an Amazon river dolphin, or pink dolphin, in Rio Negro, Amazon, some 35km northwest of Manaus, Brazil, 15 June 2014. Manaus will host the FIFA World Cup 2014 group A preliminary round match between Cameroon and Croatia on 18 June 2014. (Photo by Mast Irham/EPA) 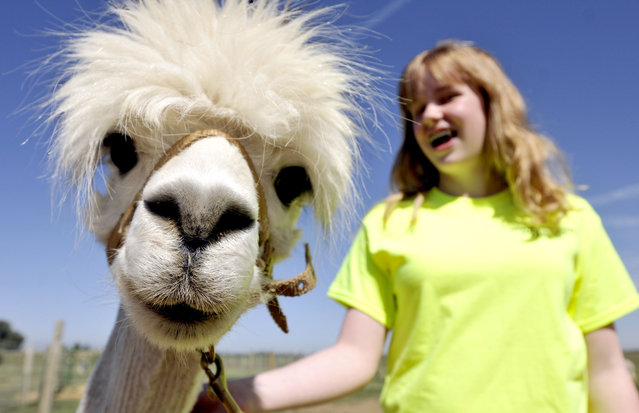 Titanic, one of the alpacas at Sunrise Silhouette alpaca farm stares down the camera as Abby Janke, 13, walks him with a halter on Tuesday, June 17, 2014, during the Baby Alpaca Watch Camp, at the farm outside Eaton, Colo. In addition to learning how to halter the animals the camp's primary goal is keep a watchful eye on the pregnant alpacas and learn how to handle the newborns. (Photo by Joshua Polson/AP Photo/The Greeley Tribune) 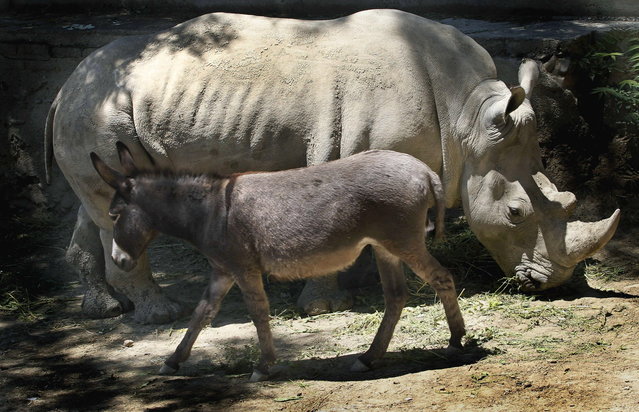 In this Saturday, June 14, 2014 photo rhinoceros Manuela and a donkey in the same enclosure at the Tbilisi Zoo, Georgia. The zoo keepers tried to help Manuela the rhino who was feeling depressed by putting the donkey in the same cage. The strategy worked and the animals have been living peacefully together. (Photo by Shakh Aivazov/AP Photo) 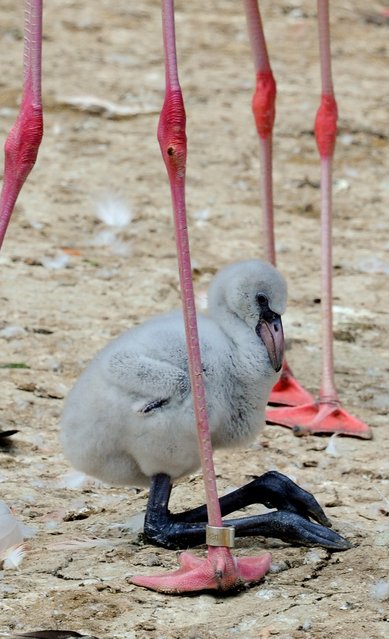 A pelican chick sits between the legs of an adult pelican on June 12, 2014 in the zoo Hellabrunn, in Munich southern Germany. (Photo by Rebecca Krizak/AFP Photo/DPA) 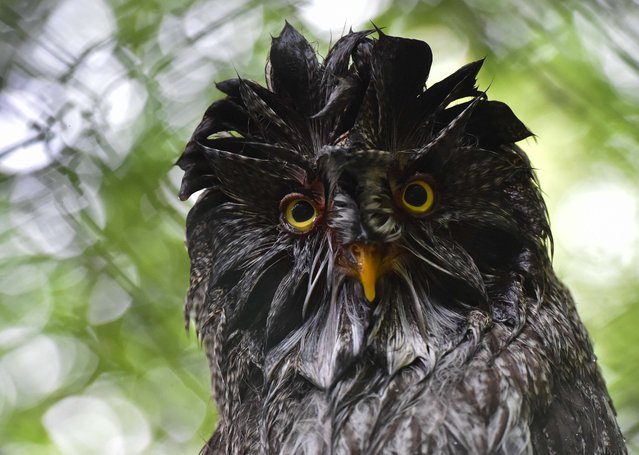 A wet owl is pictured on June 10, 2014 in a zoo after a rainfall in Eberswalde, Germany. (Photo by Patrick Pleul/AFP Photo/DPA) 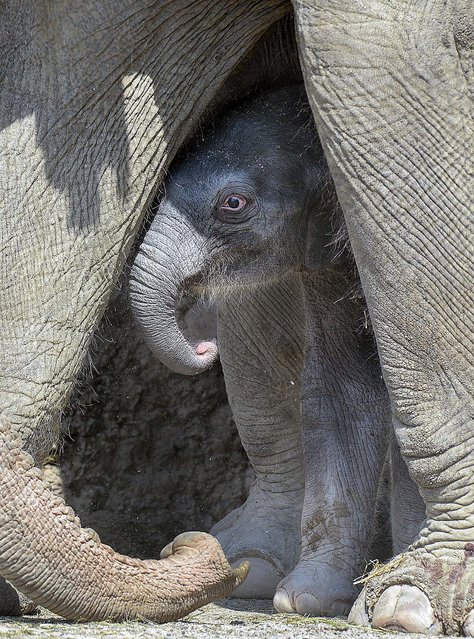 A newborn elephant stands under its mother, Indi, at the Zoo in Zurich, Switzerland, on June 18, 2014. (Photo by Steffen Schmidt/Keystone) 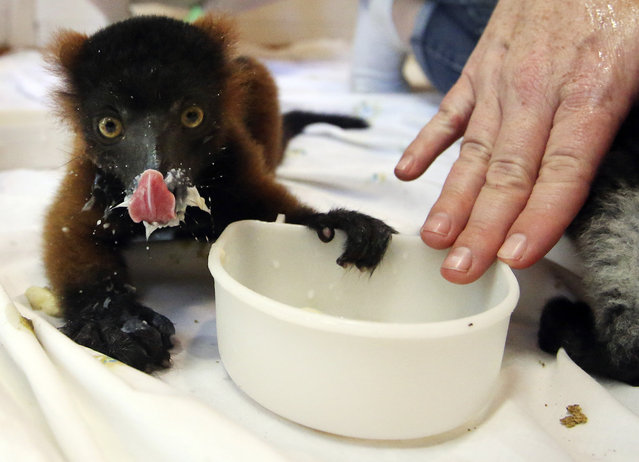 A young lemur licks food off its nose after an afternoon feeding on Monday, June 9, 2014, at Zoo World in Panama City Beach, Fla. The zoo offers an adoption program that allows the public to “adopt” an animal by sponsoring it. Sponsorships help pay for the animal's food and necessary supplies. (Photo by Patti Blake/AP Photo/News Herald) 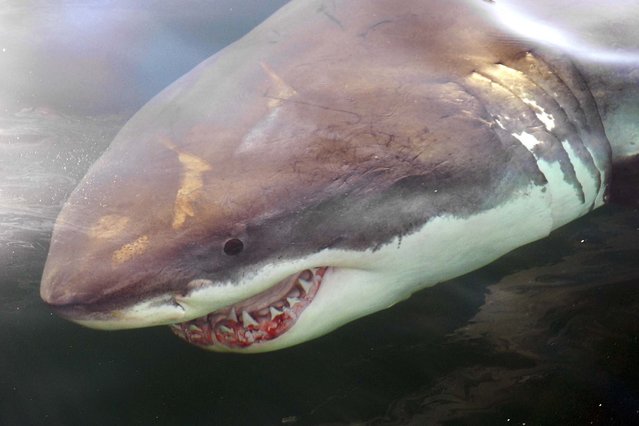 This undated photo provided by the National Oceanic and Atmospheric Administration shows a great white shark encountered off the coast of Massachusetts. A NOAA report released June 11, 2014 says great white abundance in the area has climbed since about 2000. The scientists report the shark's growing numbers are due to conservation efforts and greater availability of prey. (Photo by Greg Skomal/AP Photo/NOAA) 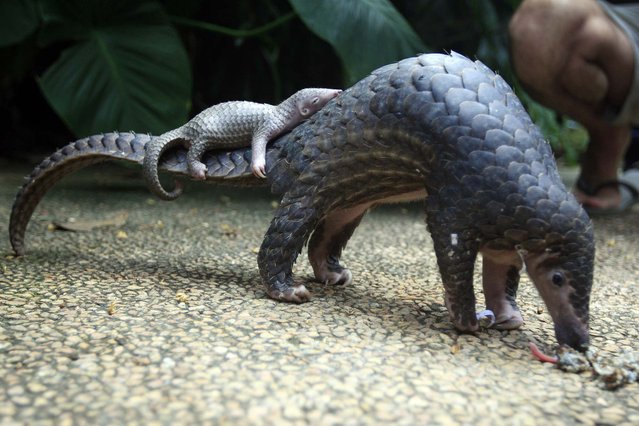 A pangolin carries its baby at a Bali zoo, Indonesia, Thursday, June 19, 2014. The pangolin baby was born on May 31. (Photo by Firdia Lisnawati/AP Photo) 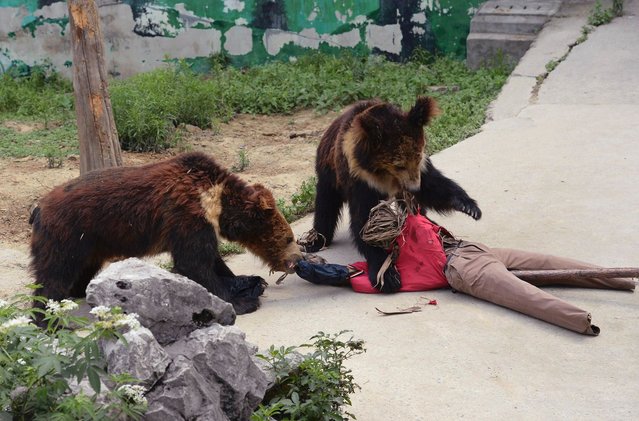 Two brown bears attack a “visitor” dummy made of straw, during a security drill to test the capability of emergency handling at a zoo in Chengdu, Sichuan province June 19, 2014. The drill on Thursday demonstrated a mock situation of two visitors falling into the enclosure of brown bears, according to local media. (Photo by Reuters/Stringer) 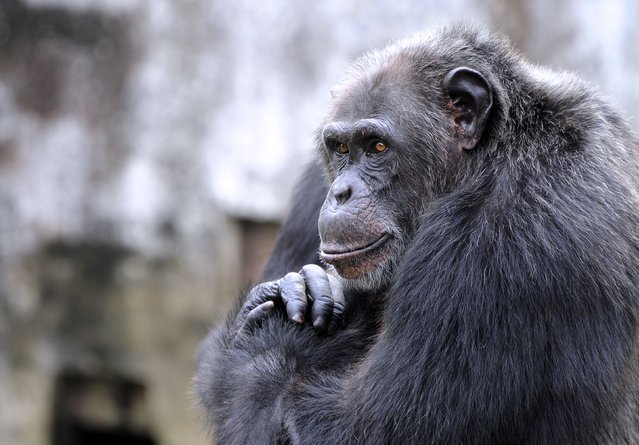 A chimpanzee is seen at the zoo in Abidjan on June 12, 2014. The zoo is home to approximately 250 amimals of 42 species. (Photo by Sia Kambou/AFP Photo) 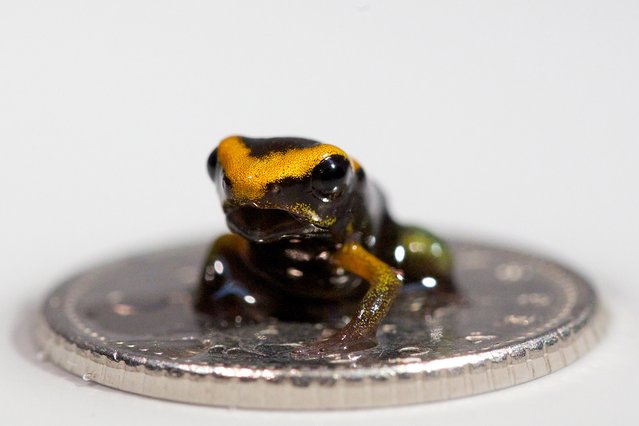 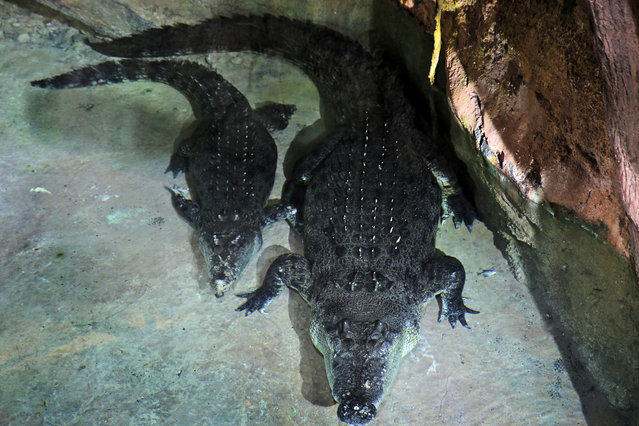 “King Croc”, right, a saltwater crocodile and his female companion of 20 years now, reside in a special enclosure at Dubai Aquarium & Underwater Zoo, in Dubai, United Arab Emirates, Tuesday, June 17, 2014. At about five meters long (16 feet) and weighing over 750 kilograms (1653 pounds), the 40-year-old crocodile arrived in Dubai from a crocodile farm in Australia. (Photo by Kamran Jebreili/AP Photo) 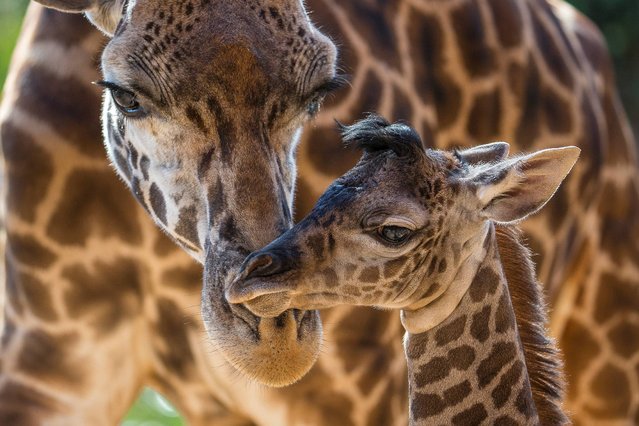 In this image provided by the San Diego Zoo, Harriet, a Masai giraffe, attends to her four-day-old calf at the San Diego Zoo Thursday June 19, 2014. The male was born on June 16, standing 6 feet 2 inches tall and weighing 146 lbs. This is Harriet's second calf; the little one�s father is Silver, the herd's sire. Giraffe populations have decreased from approximately 140,000 in the late 1990s to less than 80,000 because of habitat loss and competition with livestock for resources. (Photo by Ken Bohn/AP Photo/San Diego Zoo) 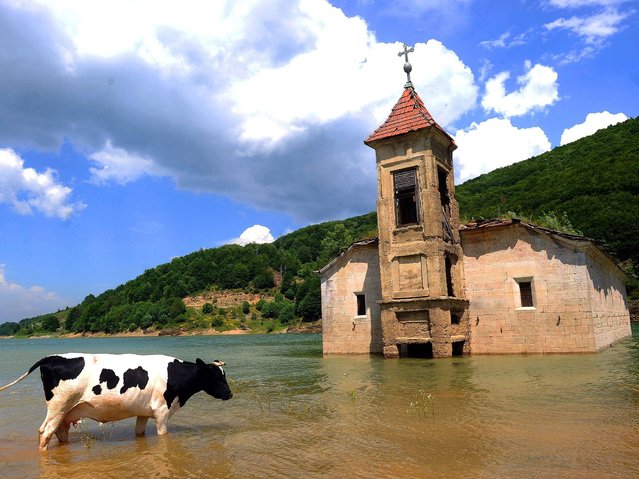 A cow walks through water in front of the submerged church of Saint Nicholas in Mavrovo Lake, some 100 km west from Skopje, Macedonia on June 14, 2014. The church of St Nicholas was intentionally flooded in 1957 during the creation of an artificial lake designed to supply water to a local power plant. (Photo by Robert Atanasovski/AFP Photo)
Edit Del
21 Jun 2014 13:11:00, post received 0 comments
Publication archive:
←   →
Popular tags:
All tags
Last searches: