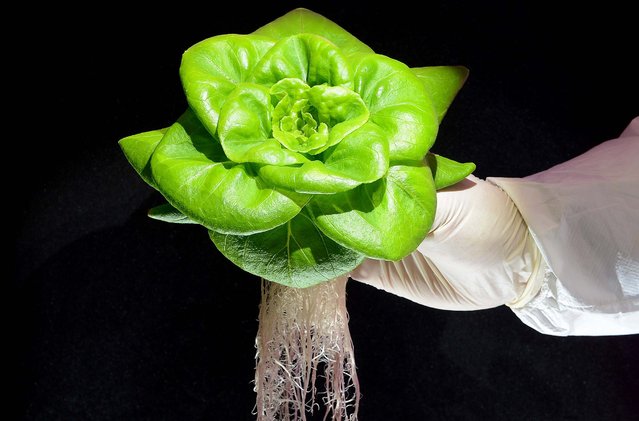 Engineer Daniel Schubert holds lettuce at the German Aerospace Center in Bremen, on Jule 21, 2014. Scientists and engineers from the German Aerospace Center are developing greenhouses for a potential Mars colony. The greenhouses will contain combined life-support systems which use recycled urine to manufacture fertilizer, helping to grow vegetables for a lunar and Mars environment. The first greenhouse will be tested for nine months in 2016/17 in an inhospitable environment in the Antarctic. (Photo by David Hecker/Getty Images) 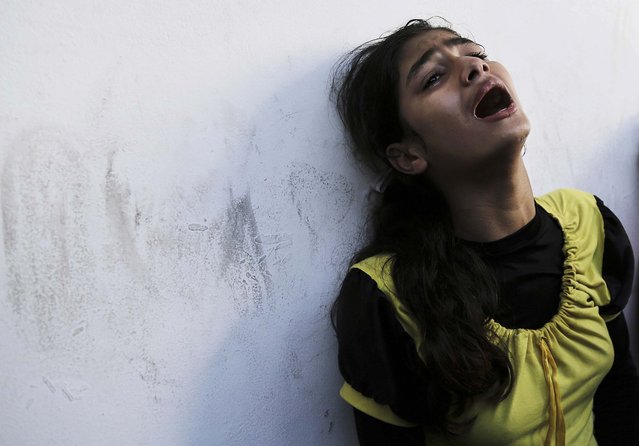 A displaced Palestinian girl who lost her relative in an Israeli airstrike at a U.N school cries at Beit Hanoun hospital in the northern Gaza Strip, on Jule 24, 2014. (Photo by Adel Hana/Associated Press) 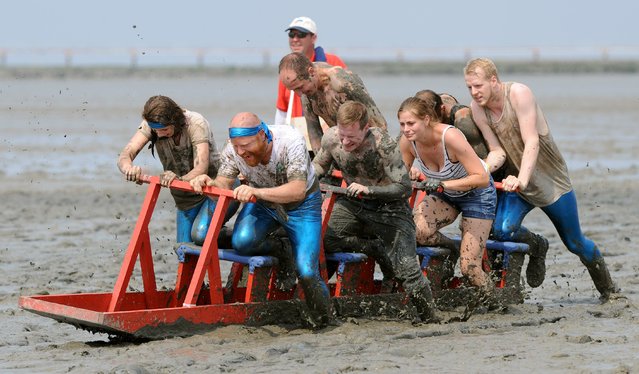 Participants of the mudflat sledge championships push their sledge through the wadden sea on July 20, 2014 in Upleward, northern Germany. The competition was titled “Dirty sports for a clean job” and was a charity event in favour of a regional association fighting against cancer. (Photo by Ingo Wagner/AFP Photo/DPA) 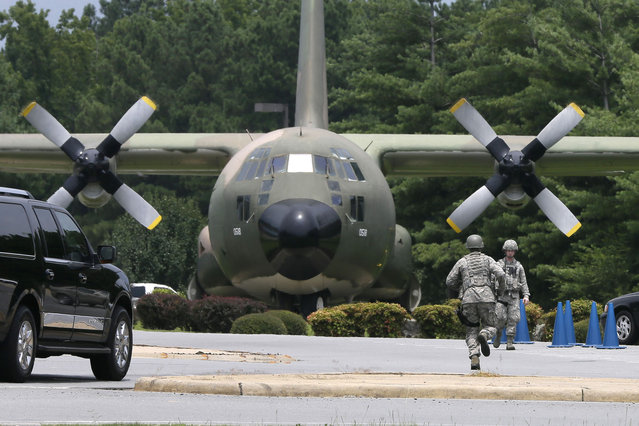 Security personnel run past a C-130 aircraft on static display at the front gate of Little Rock Air Force Base in Jacksonville, Ark., Wednesday, July 23, 2014. The base has been on lockdown since late morning Wednesday. (Photo by Danny Johnston/AP Photo) 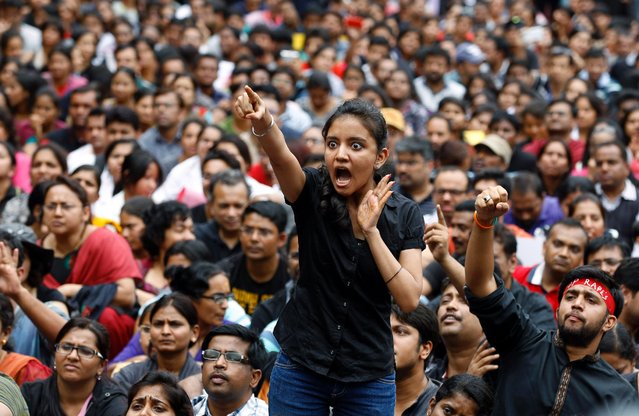 An angry protester points her finger towards the Bangalore police chief during a protest against alleged police inaction after a six-year-old was raped at a school, in Bangalore, India, July 19, 2014. More than 4,000 parents and relatives of children who attend the school shouted slogans against the school's administration July 19, 2014 and demanded that police arrest those involved in the July 2 incident, which was reported only this past week. (Photo by Aijaz Rahi/AP Photo) 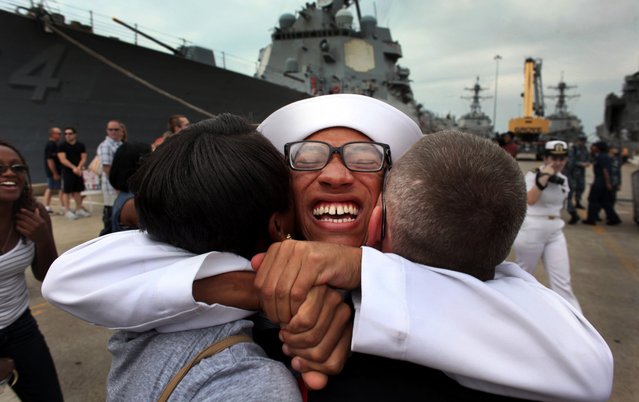 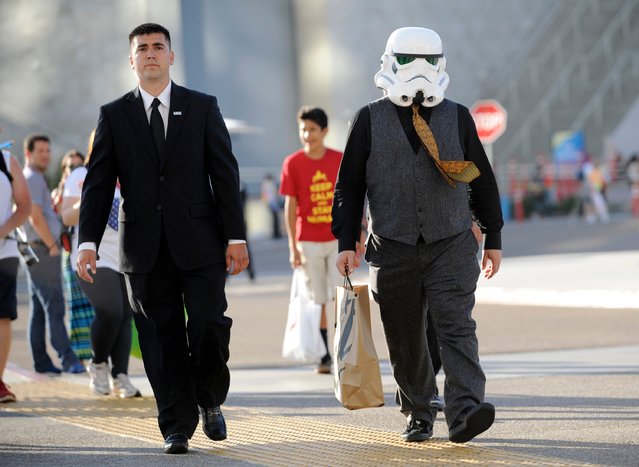 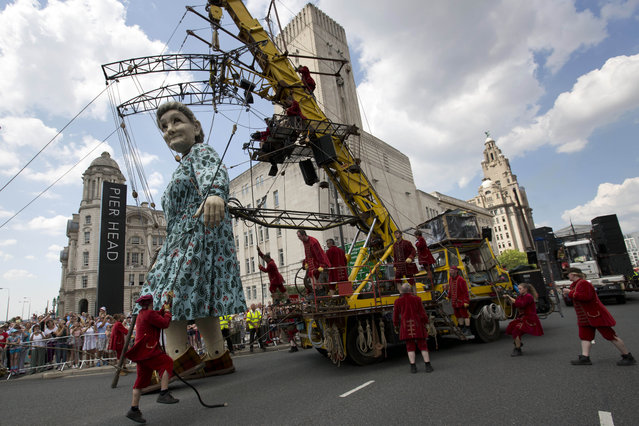 A grandmother giant marionette passes the Pier Head in the centre of Liverpool as she and two other giant marionettes, a girl and a dog, parade through the streets, in Liverpool, England, Friday, July 25, 2014. The huge figures begin the three-day commemoration of World War One. Royal de Luxe, the French street theatre company organised the event. (Photo by Jon Super/AP Photo) 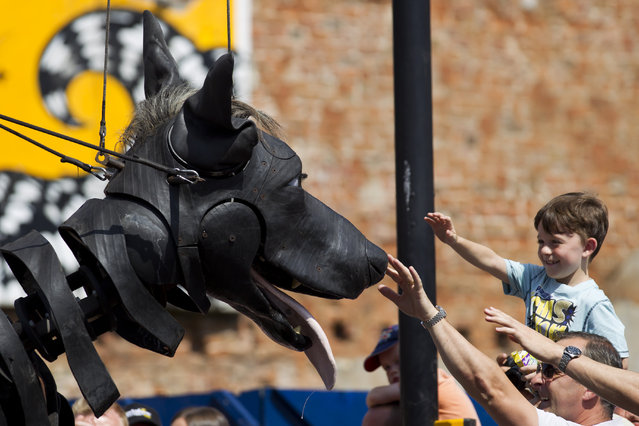 A giant dog is steered through the centre of Liverpool as she and two other giants, a grandmother and a girl, parade for three days telling the story of the city's involvement in World War One, Liverpool, England, Friday, July 25, 2014. Royal de Luxe was formed in 1979 as a French street theatre company and has played more than 1,000 shows to 18 million spectators around the world. (Photo by Jon Super/AP Photo) 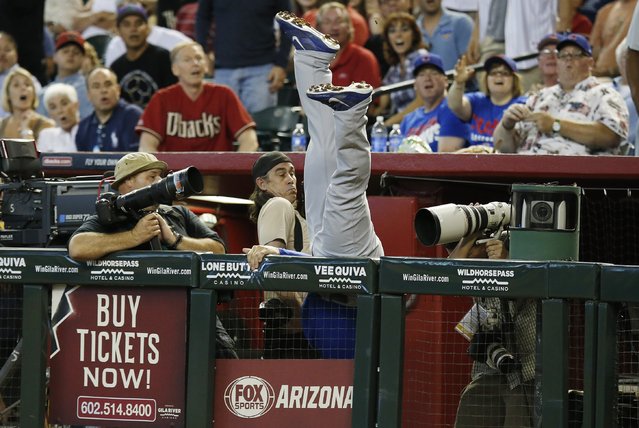 Photographers try to avoid Chicago Cubs' Anthony Rizzo, after he made a diving catch into the photo well, on a foul ball hit by Arizona Diamondbacks' Aaron Hill during the sixth inning of a baseball game on Sunday, July 20, 2014, in Phoenix. (Photo by Ross D. Franklin/AP Photo) 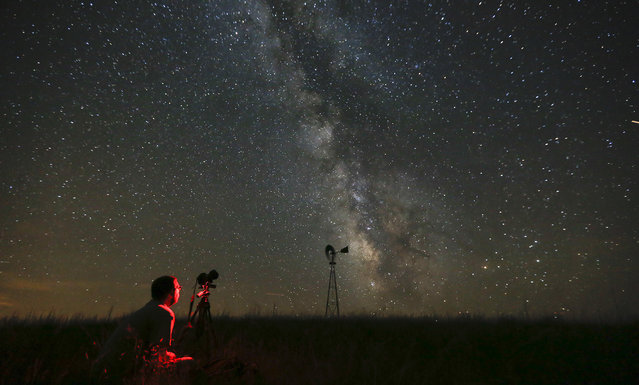 Omaha photographer Lane Hickenbottom photographs the night sky in a pasture near Callaway, Neb. on Wednesday night, July 23, 2014. With no moon in the sky, the Milky Way was visible to the naked eye. (Photo by Travis Heying/AP Photo/The Wichita Eagle) 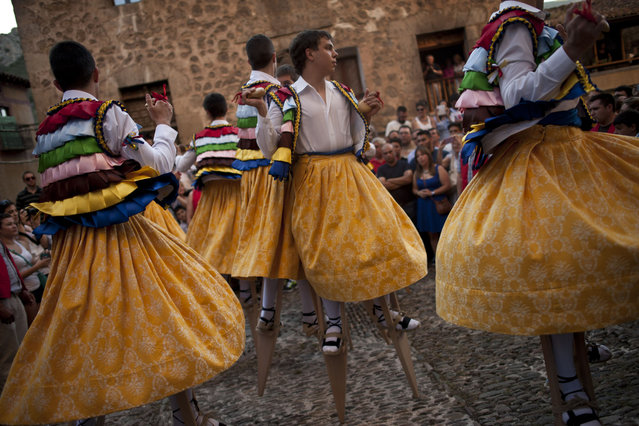 Dancers perform on stilts in honor of Saint Mary Magdalene, in a street for the traditional “Danza de Los Zancos” (Los Zancos Dance), in the small town of Anguiano, northern Spain Tuesday, July 22, 2014. Eight young people from the town balance on stilts down the old street, turning to the sound of folk music played on a pipe and drum. (Photo by Alvaro Barrientos/AP Photo) 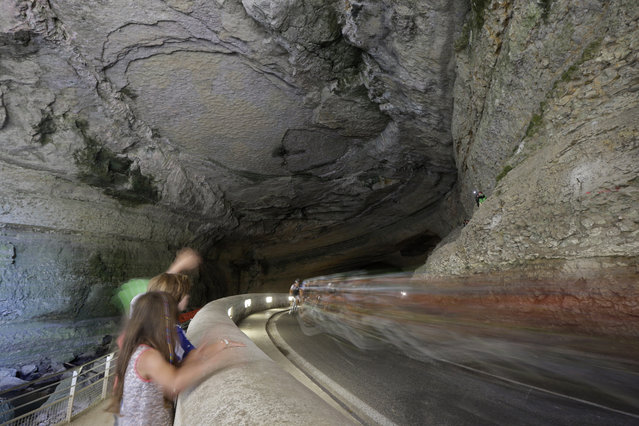 Spectators wave as the pack passes through a tunnel during the sixteenth stage of the Tour de France cycling race over 237.5 kilometers (147.6 miles) with start in Carcassonne and finish in Bagneres-de-Luchon, France, Tuesday, July 22, 2014. (Photo by Laurent Cipriani/AP Photo) 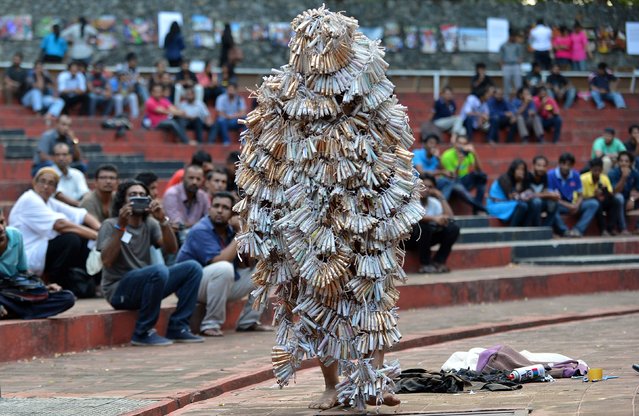 A Sri Lankan activist, who wrapped himself with fire crackers, walks in Colombo on July 23, 2014 to symbolically demonstrate against people burned during Anti-Tamil riots on the island thirty-one years ago. Official accounts placed the death toll at 400 while human rights activists put the toll at thousands. (Photo by Ishara S.Kodikara/AFP Photo) 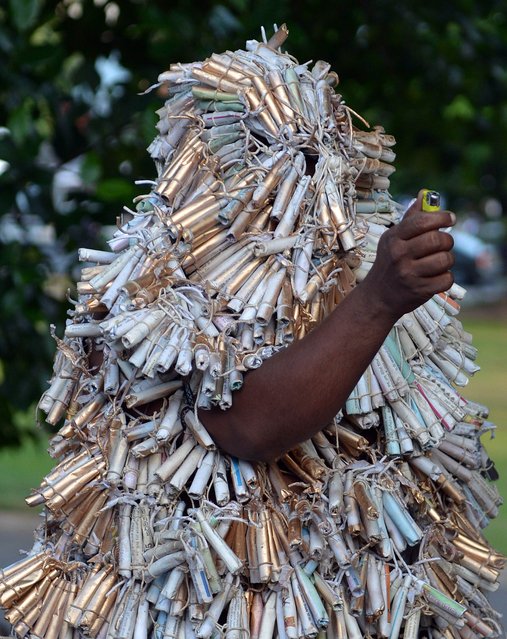 A Sri Lankan activist, who wrapped himself with fire crackers, holds a lighter as he walks in Colombo on July 23, 2014 to symbolically demonstrate against people burned during Anti-Tamil riots on the island thirty-one years ago. Official accounts placed the death toll at 400 while human rights activists put the toll at thousands. (Photo by Ishara S.Kodikara/AFP Photo) 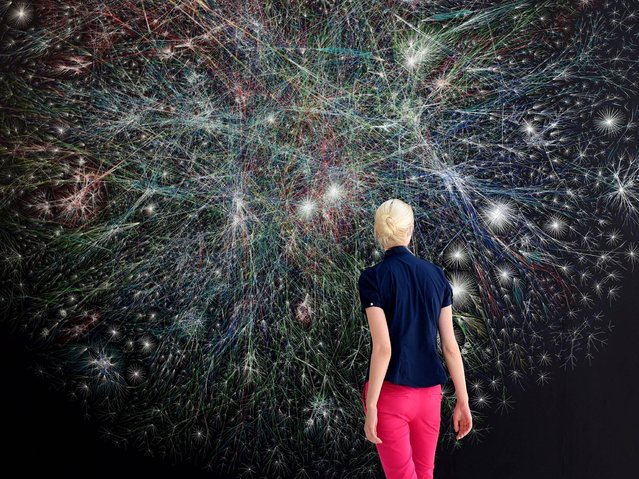 A woman looks at the visualization of data traffic online, entitled “The Opte Project” by US copmuter scientist and artist Barrett Lyon, on display at the Kunsthalle in Kiel, Germany, 25 July 2014. The exhibition “Nets. Weaving Webs in Art” with 55 works from 25 contemporary artists will run from 28 July until 16 November. (Photo by Carsten Rehder/EPA) 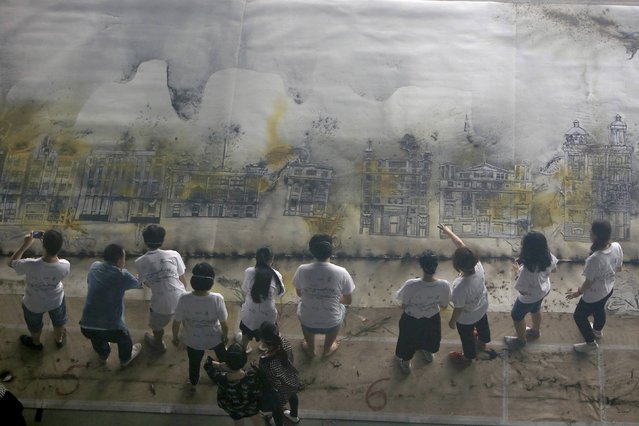 People stand around “The Bund Without Us”, an artwork made by artist Cai Guoqiang, in Shanghai July 24, 2014. Cai used gunpowder and hard paper to create the artwork, featuring the Bund dominated by animals, without people. (Photo by Reuters/Stringer) 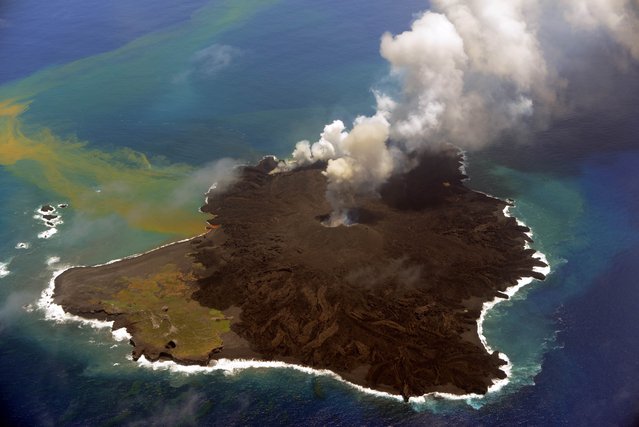 This handout picture taken by Japan Coast Guard on July 23, 2014 shows the newly created islet (R) and Nishinoshima island (L), which are conjoined with erupting lava at the Ogasawara island chain, 1,000 kilometres south of Tokyo. A smouldering islet off Japan's Pacific coast has grown six times in its land surface since before it merged last December with a landmass created by volcanic eruptions. (Photo by AFP Photo/Japan Coast Guard) 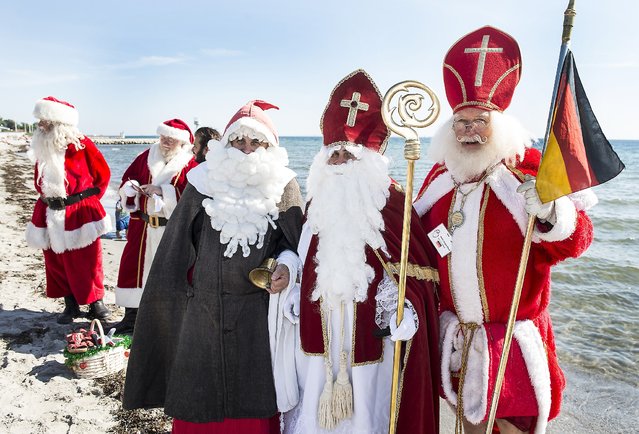 Santas from all over the world gather for the traditional July Santa Congress in Copenhagen Tuesday, July 22, 2014 and stuck to their traditional schedule reserving half the day for a a dip in the sea – although, their feet only – in the waters of Oresund, the sound between Copenhagen and the Swedish Coast. (Photo by Mogens Flindt/AP Photo/Polfoto)

Police try to stop a woman wielding a cane from hitting a woman supporting Israel in its war with Hamas, not pictured, during a rally at John F. Kennedy Plaza, also known as Love Park, in Philadelphia on Wednesday, July 23, 2014. (Photo by AP Photo) 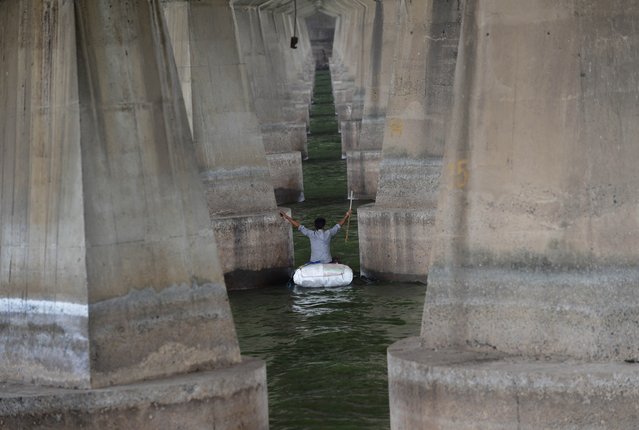 Indian youth Barkat Ali, 18, uses a makeshift raft to paddle through the Sabarmati River in Ahmedabad on July 21, 2014. Using a magnet, Barkat collects some 400 INR (about 6.60 USD) every day from the Sabarmati river, gathering coins often thrown into the water by devotees as offerings. (Photo by Sam Panthaky/AFP Photo) 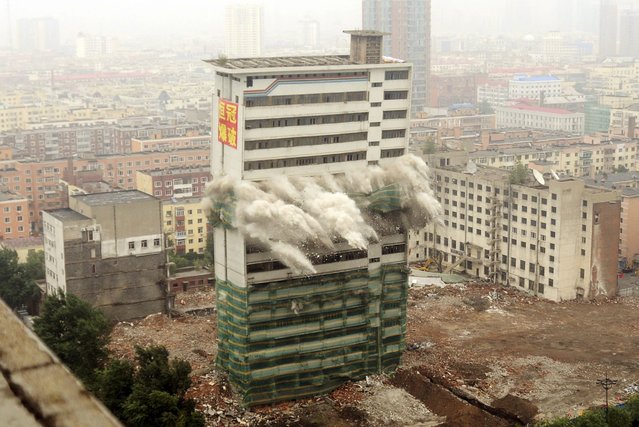 The former Heilongjiang TV station headquarters collapses as it is demolished by explosives to make way for the city's new administrative service centre in Harbin, Heilongjiang province, July 20, 2014. (Photo by Reuters/China Daily) 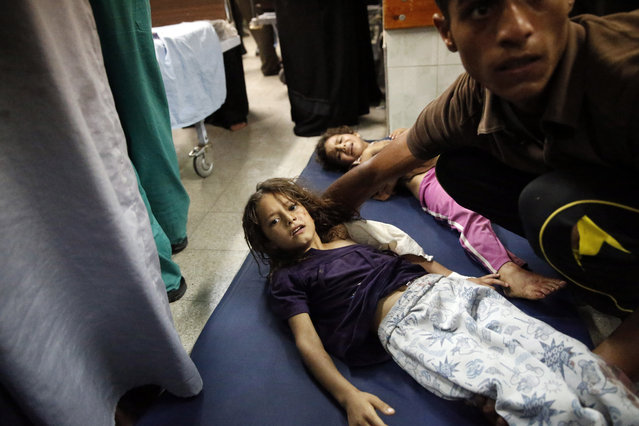 Palestinian children, wounded in an Israeli strike on a compound housing a U.N. school in Beit Hanoun, in the northern Gaza Strip, lay on the floor of an emergency room at the Kamal Adwan hospital in Beit Lahiya, Thursday, July 24, 2014. Israeli tank shells hit the compound, killing more than a dozen people and wounding dozens more who were seeking shelter from fierce clashes on the streets outside. Gaza health official Ashraf al-Kidra says the dead and injured in the school compound were among hundreds of people seeking shelter from heavy fighting in the area. (Photo by Lefteris Pitarakis/AP Photo) 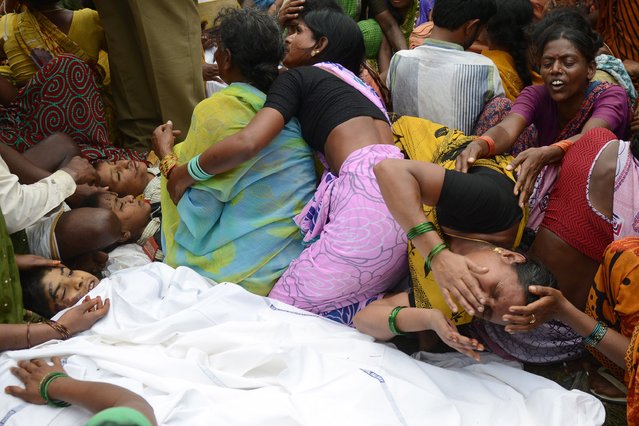 Indian families grieve over the bodies of their children at the site of the collision between a school bus and a train at Thoopran Mandal of Medak District, about 58 kilometers from Hyderabad, on July 24, 2014. A passenger train rammed into a school bus in southern India, killing at least 11 children, with fears the death toll could be as high as 25, officials said. (Photo by Noah Seelam/AFP Photo) 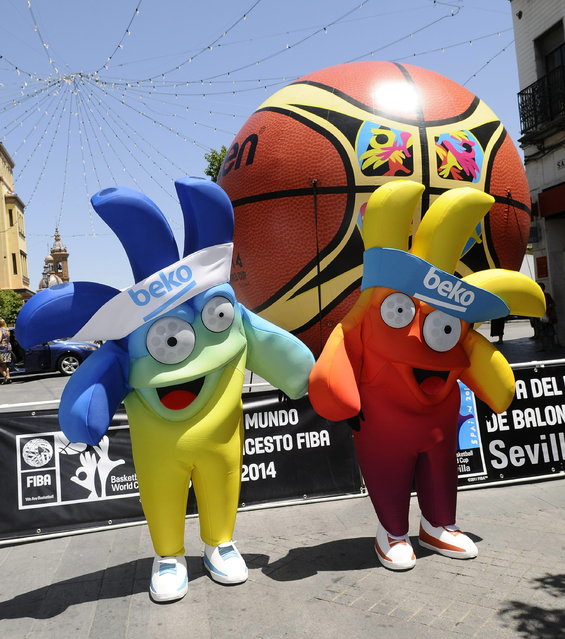