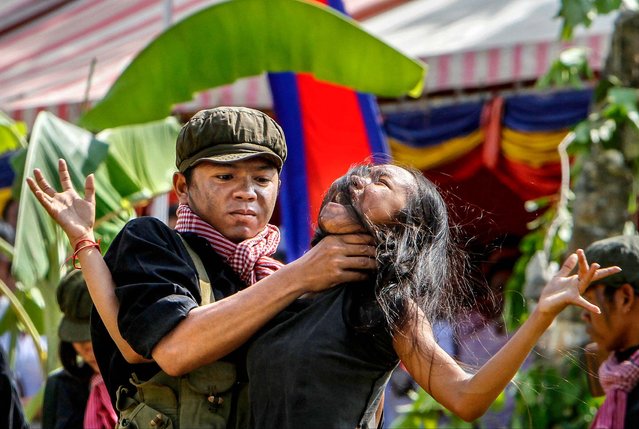 Cambodian students from the Royal University of Fine Arts re-enact the torture executed by the Khmer Rouge during their reign of terror in the 1970s to mark the annual Day of Anger at Choeung Ek, a former Khmer Rouge “killing field” dotted with mass graves, on the outskirts of Phnom Penh, on May 20, 2014. Several hundred Cambodians, including Buddhist monks, attended the event to mark the 35th anniversary of the Day of Anger to remember the atrocities committed by the Khmer Rouge's 1975-79 era. (Photo by Heng Sinith/Associated Press) 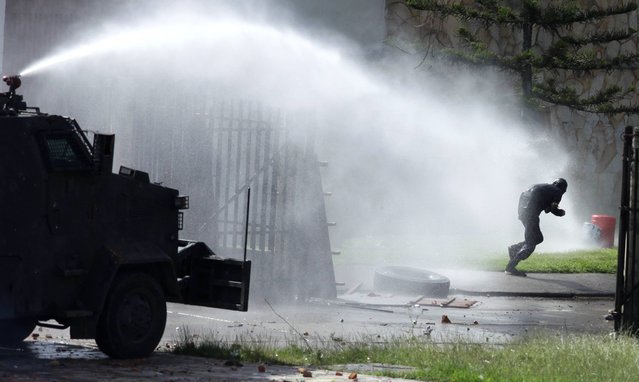 A police water cannon is used to disperse hooded students who blocked the main avenue in front of the National University in Bogota, Colombia, Tuesday, May 20, 2014. The students blocked the avenue to shout slogans and distribute pamphlets to commemorate the 50th anniversary of the Revolutionary Armed Forces of Colombia, FARC. (Photo by Javier Galeano/AP Photo) 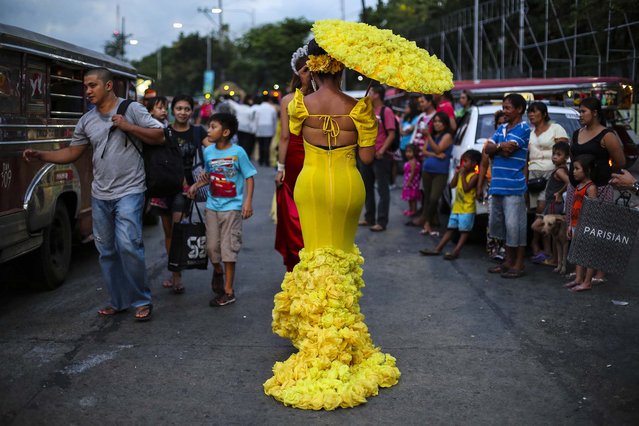 Joel Mondano walks in a dress beside pedestrians and commuters as she participates in a transgender parade called “Grand Trans-Santacruzan” on International Day Against Homophobia and Transphobia in suburban Quezon city, north of Manila, Philippines, on May 18, 2014. The Santacruzan is a popular religious festival held in many towns and cities throughout this largely Roman Catholic country. (Photo by Aaron Favila/Associated Press) 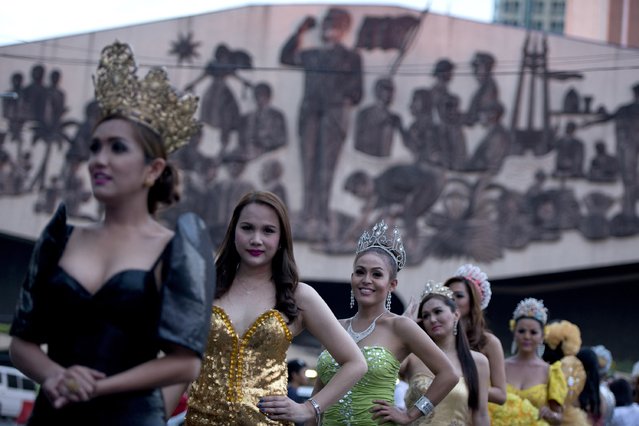 Association of Transgender People in the Philippines (ATP) and TransMan Philippines (TMP) members prepare to participate in a “Santacruzan” procession in Manila on May 18, 2014. The parade is held in celebration of the International Day Against Homophobia and Transphobia. (Photo by Noel Celis/AFP Photo) 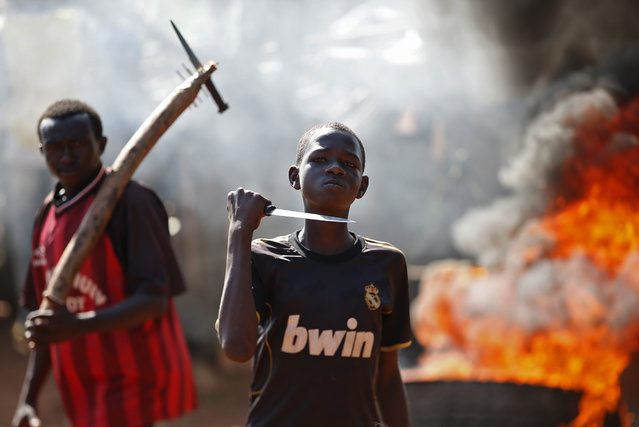 A boy gestures in front of a barricade on fire during a protest after French troops opened fire at protesters blocking a road in Bambari May 22, 2014. (Photo by Goran Tomasevic/Reuters) 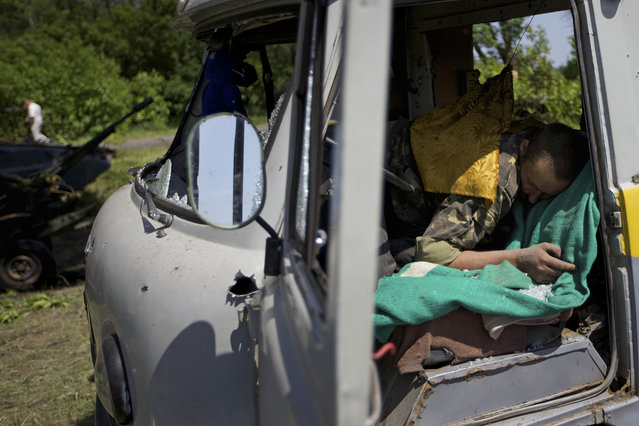 A body seen in a destroyed car near the village of Blahodatne, eastern Ukraine, on Thursday, May 22, 2014. At least 11 Ukrainian troops were killed and about 30 others were wounded when Pro-Russians attacked a military checkpoint, the deadliest raid in the weeks of fighting in eastern Ukraine. Three charred Ukrainian armored infantry vehicles, their turrets blown away by powerful explosions, and several burned vehicles stood at the site of the combat. (Photo by Ivan Sekretarev/AP Photo) 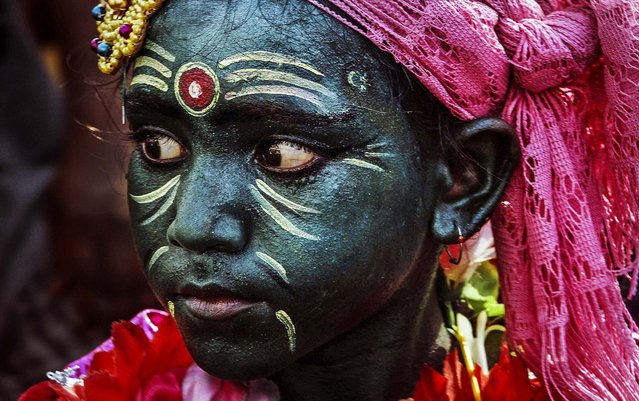 A boy with his face painted participates in a procession for the Chandan Yatra festival in Puri, India, on May 21, 2014. Chandan Yatra means Sandalwood Voyage, where devotees smear the deities of the Lord with cooling sandalwood paste. (Photo by Biswaranjan Rout/Associated Press) 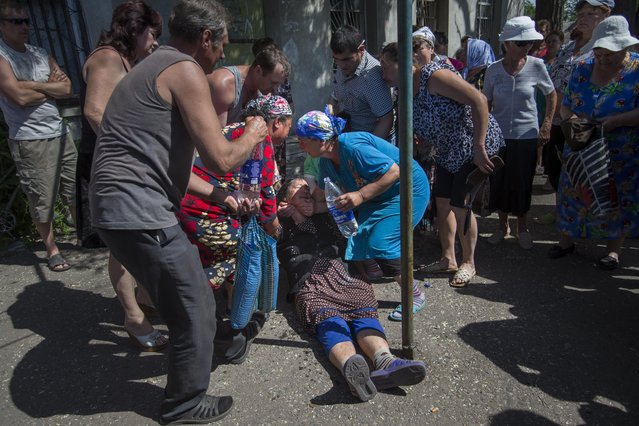 Local citizens help a lady from fainting while attending a rally in protest against a shelling from Ukrainian government forces in the village of Semyonovka, near the major highway which links Kharkiv, outside Slovyansk, Ukraine, Thursday, May 22, 2014. Several trains carrying weapons and planeloads of troops have left regions near Ukraine as part of a massive military pullout, the Russian Defense Ministry said Thursday, even as fighting raged between pro-Russian insurgents and government forces in eastern Ukraine. (Photo by Alexander Zemlianichenko/AP Photo) 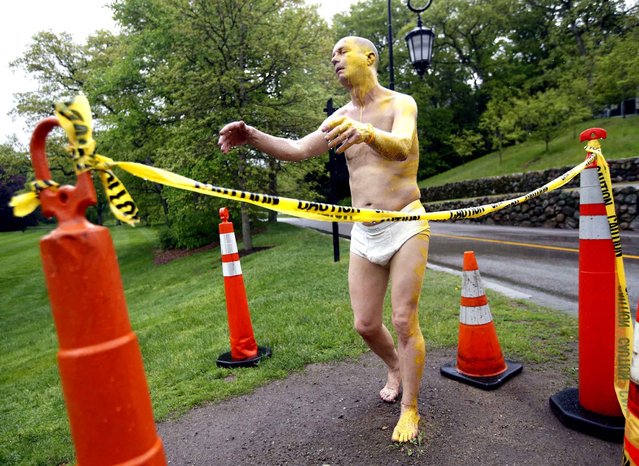 A fiberglass sculpture at Wellesley College, entitled “Sleepwalker”, is surrounded by cones and yellow caution tape, Wednesday, May 22, 2014, after being defaced Tuesday night with yellow paint on its face, left arm, left leg, and a foot. It was one of several properties on campus vandalized, and campus police are investigating. The outdoor, lifelike sculpture of a man sleepwalking in his underpants had provoked some concern on the college campus in February. (Photo by Elise Amendola/AP Photo) 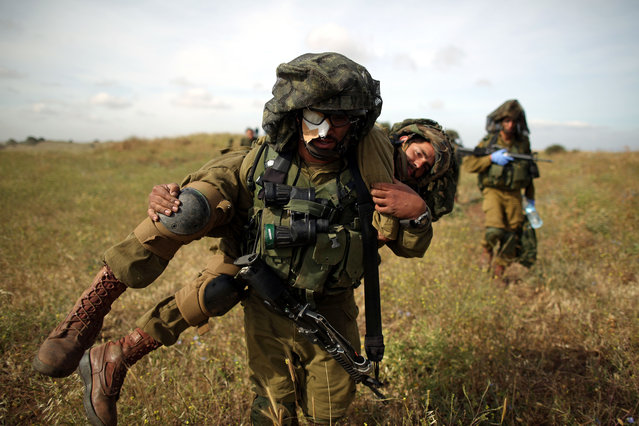 An Israeli soldier from the Netzach Yehuda brigade, the Israeli army battalion for Orthodox soldiers and Yeshiva students, carries a simulated casualty during the battalion ground maneuver exercise in the Golan Heights near the Israeli-Syrian border, May 19, 2014. (Photo by Abir Sultan/EPA) 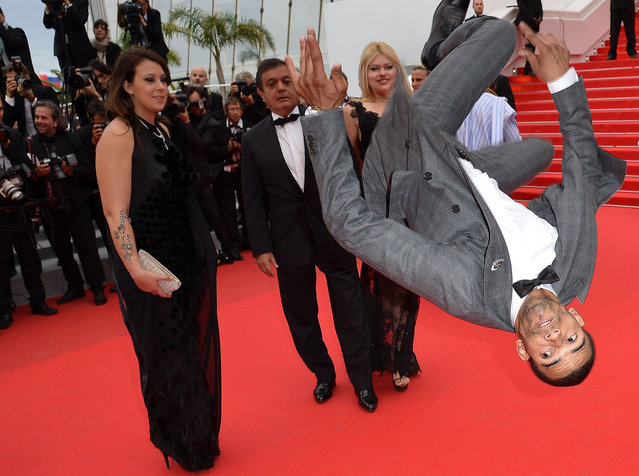 French dancer Brahim Zaibat performs as he arrives for the screening of the film “Foxcatcher” at the 67th edition of the Cannes Film Festival in Cannes, southern France, on May 19, 2014. (Photo by Alberto Pizzoli/AFP Photo) 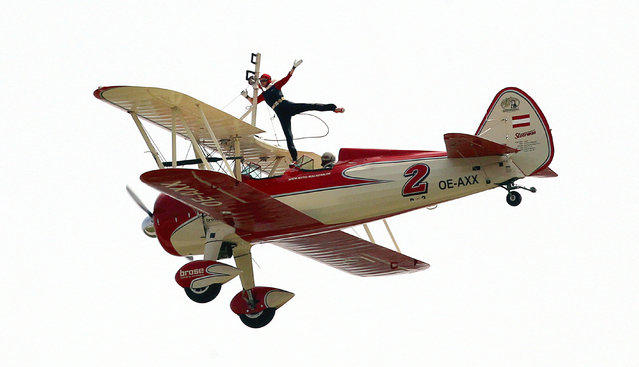 Pilots in historical airplanes perform during the public day at the ILA Berlin Air Show 2014 in Selchow, Germany, Friday, May 23, 2014. The aerospace and defense industry exhibition takes place at the southern area of Berlin-Schoenefeld airport from May 20 to 25, 2014. (Photo by Wolfgang Kumm/AP Photo/DPA) 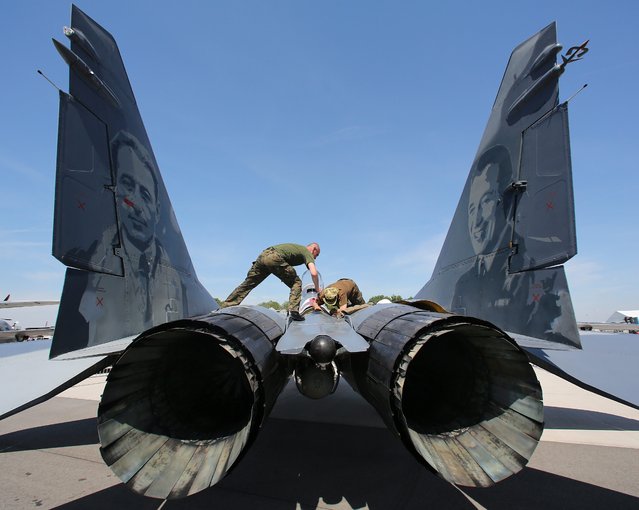 Two mechanics stand on a MIG-29 aircraft at the ILA Berlin Air Show 2014 in Selchow, Germany, 21 May 2014. The aerospace and defence industry exhibition takes place at the southern area of Berlin-Schoenefeld airport from 20 till 25 May 2014. (Photo by Wolfgang Kumm/EPA) 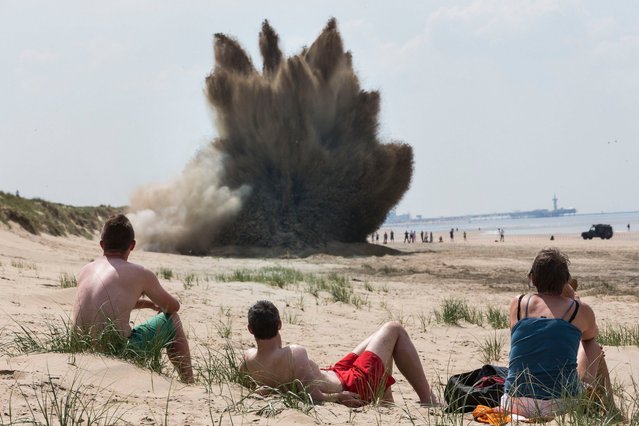 Beachgoers watch the detonation of a 500 pound British bomb on the beach on May 19, 2014 in Wassenaar, Netherlands. The bomb was dropped by the British allied forces during the second world war over nearby Leiden where it was found on a building site. (Photo by Michel Porro/Getty Images) 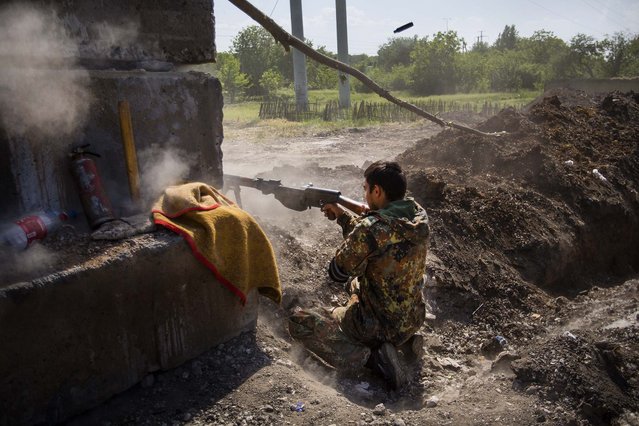 A pro-Russian militant opens fire as a test from an anti-tank weapon preparing to fight against Ukrainian government troops at a checkpoint blocking the major highway which links Kharkiv, outside Slovyansk, eastern Ukraine, on May 18, 2014. (Photo by Alexander Zemlianichenko/Associated Press) 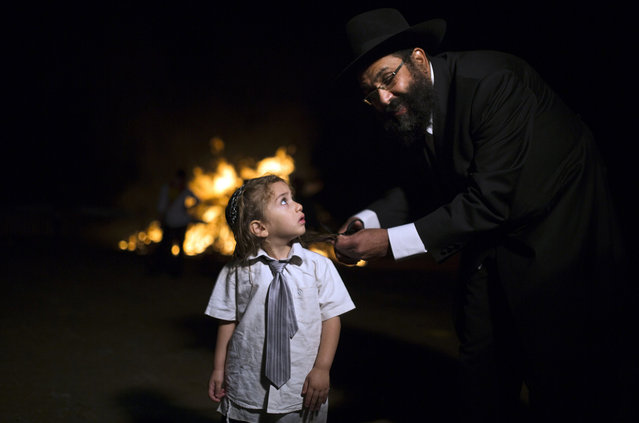 An ultra-Orthodox Jew cuts the hair of his son near a bonfire, during celebrations for the Jewish holiday of Lag Ba'Omer in Kfar Chabad, near the city of Lod, May 17, 2014. The holiday marks the end of a plague that killed thousands of Jewish scholars in ancient times, as well as the anniversary of the death of Bar Yochai, who rebelled against Roman rule and is believed to be the author of the Zohar, the core text of Kabbalah mysticism. Holiday traditions include lighting bonfires and cutting the hair of three-year-old boys for the first time. (Photo by Amir Cohen/Reuters) 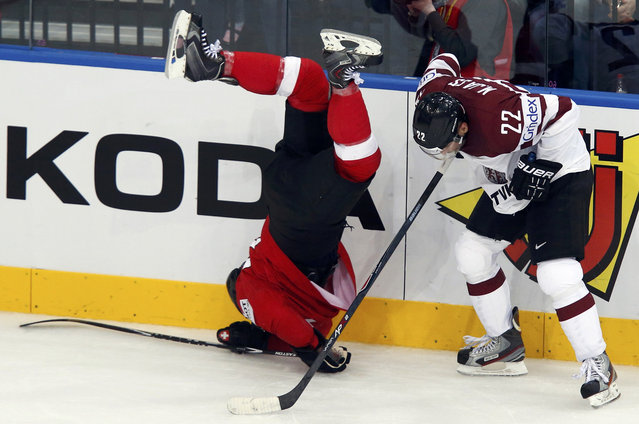 Switzerland's Yannick Weber (L) falls after a collision with Latvia's Maris Jass (R) during the third period of their men's ice hockey World Championship Group B game at Minsk Arena in Minsk May 20, 2014. (Photo by Alexander Demianchuk/Reuters) 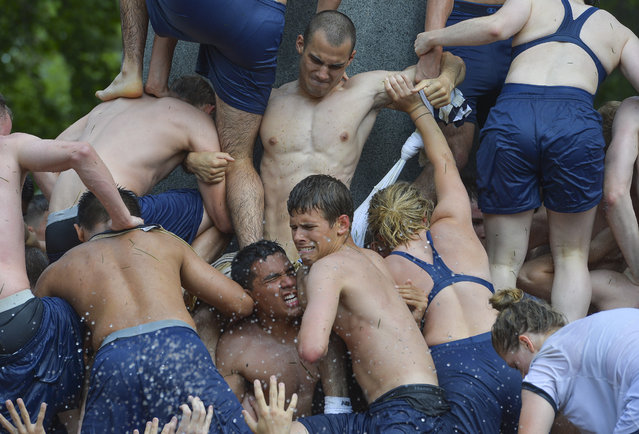 United States Naval Academy plebes climb the Herndon Monument to remove the “dixie cup” hat atop the 21ft. greased monument at the United States Naval Academy on May 19, 2014 in Annapolis, Md. The traditional Herndon Monument Climb is where the Naval Academy plebes build a human pyramid to remove the “dixie cup” hat at the top of the 21ft. vegetable shortening covered monument and replace it with an underclassman's hat. (Photo by Ricky Carioti/The Washington Post) 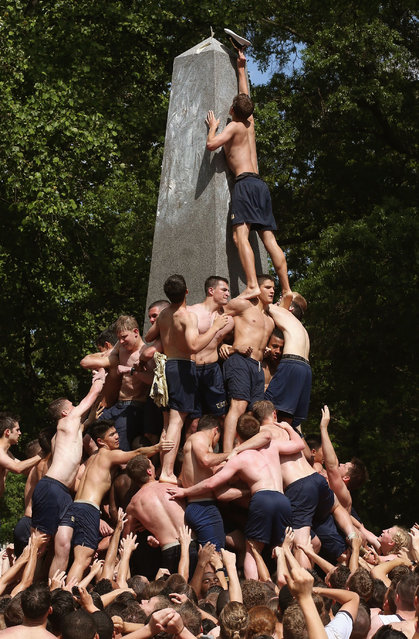 Annapolis Naval Academy freshman places a hat on top of the lard covered Herndon Monument on May 19, 2014 in Annapolis, Maryland. Each year the freshman class, known as “Plebes”, climb the monument at the Naval Academy to retrieve the Plebian Sailor's hat and replace it with an officer's hat. The tradition is one step in marking the end of wearing freshman headgear and moving up to headgear more like a U.S. Naval officer. (Photo by Mark Wilson/Getty Images) 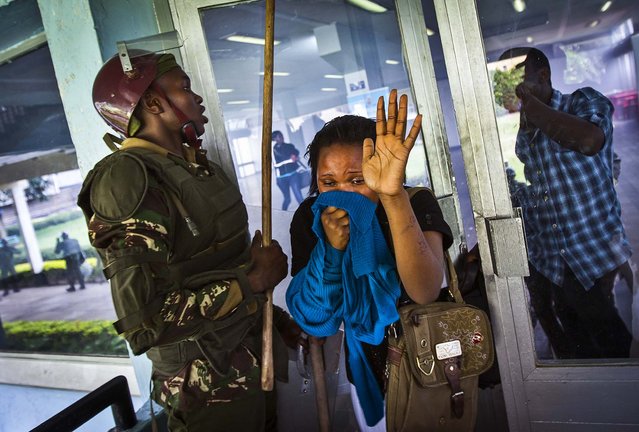 A woman is overcome by tear gas as she tries to escape from a building inside Nairobi University's main campus, on May 20, 2014. Kenyan university students carried out demonstrations over a proposed increase in student fees, but the protests quickly turned violent with students throwing rocks and security forces firing tear gas. Riot police cornered the students in a campus building and fired dozens of tear gas grenades inside and temporarily blocked anyone from leaving. (Photo by Ben Curtis/Associated Press) 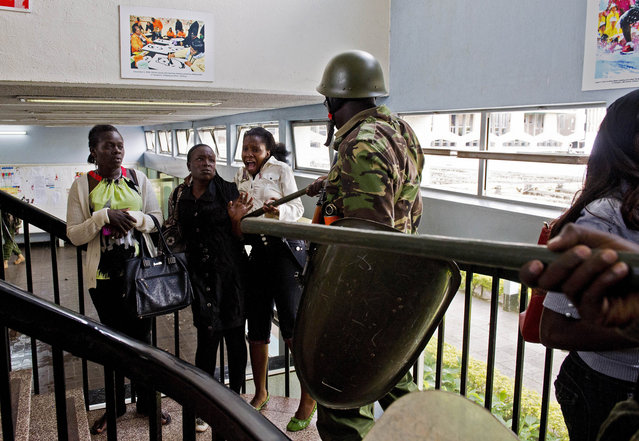 Kenyan riot police question students inside Nairobi University on May 20, 2014. The students were demonstrating against a controversial fee increment which ended in a riot with tear gas fired and riot police forcing their way inside the university to arrest students after rocks were thrown. (Photo by Carl de Souza/AFP Photo) 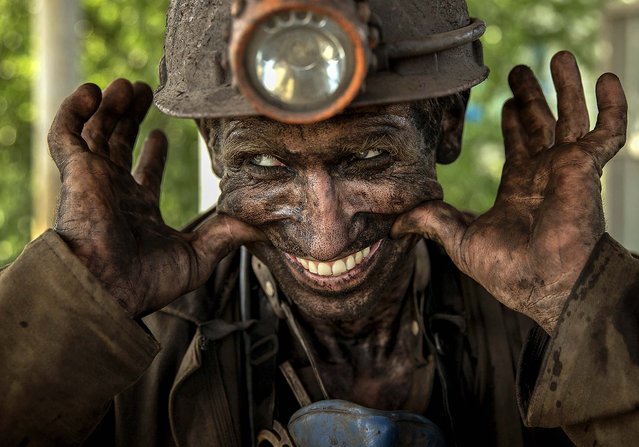 A coal miner smiles after finishing his shift at a coal mine outside Donetsk, Ukraine, on May 20, 2014. While steel workers in Mariupol joined anti-separatist actions, miners refused to take part in a planned protest against the Donetsk People's Republic. (Photo by Vadim Ghirda/Associated Press) 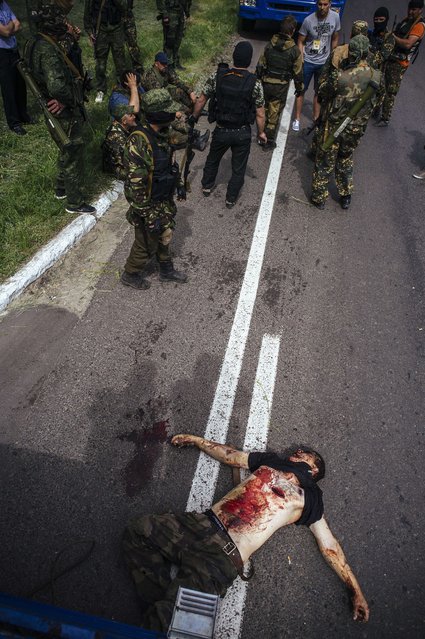 Pro-Russian gunmen stand next to a dead body at a checkpoint outside of the eastern Ukrainian city of Donetsk, on May 23, 2014. At least five people were killed in fighting early Friday between pro-Russian militiamen and Ukrainian forces near the eastern city of Donetsk, an AFP photographer said. Fighting in the east has seen a bloody resurgence ahead of Sunday's presidential election that the pro-Russian insurgents have vowed to disrupt. (Photo by Dimitar Dilkoff/AFP Photo) 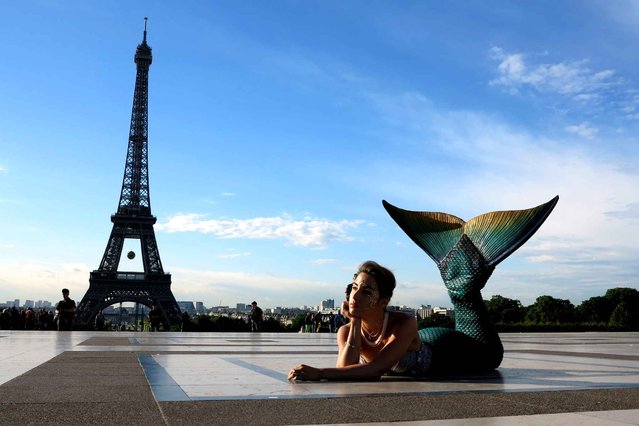 A model dressed as a mermaid poses in front of the Eiffel Tower during sunrise on May 22, 2014 in Paris. (Photo by Ludovic Marin/AFP Photo) 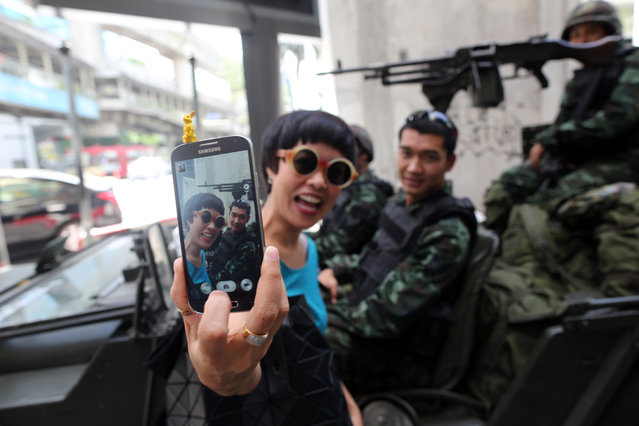 A woman takes a “selfie” photograph with Royal Thai Army soldiers stationed at the Ratchaprasong intersection in central Bangkok, Thailand, on Tuesday, May 20, 2014. Thailand's army imposed martial law nationwide after months of political turmoil that brought down an elected leader and tipped the economy into a contraction. (Photo by Dario Pignatelli/Bloomberg via Getty Images) 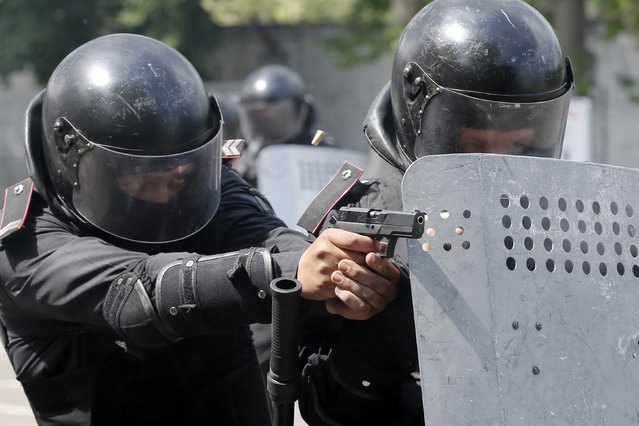 Members of security forces take part in a drill conducted by members of the Interior Ministry, the National Guard and other Ukrainian security services, to resist and prevent mass unrest, in Odessa May 19, 2014. Russian President Vladimir Putin has ordered military forces to return to their permanent bases after drills in three regions bordering Ukraine, the Kremlin said on Monday. Putin's office said he had issued the order because the spring maneuvers were over. The move could also be intended to ease tension in Russia's standoff with the West over Ukraine before Kiev holds a presidential election on Sunday. (Photo by Yevgeny Volokin/Reuters)
Edit Del
24 May 2014 12:51:00, post received 0 comments
Publication archive:
←   →
Popular tags:
All tags
Last searches: