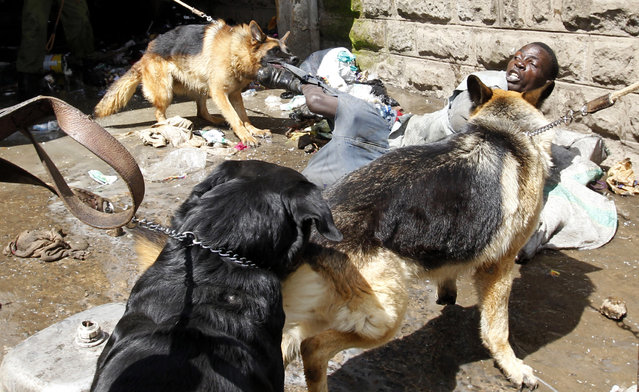 Police dogs attack a man found stealing from ethnic Somali homes during the second day of skirmishes in the Eastleigh neighbourhood of Kenya's capital Nairobi, November 2012. (Photo by Thomas Mukoya/Reuters) 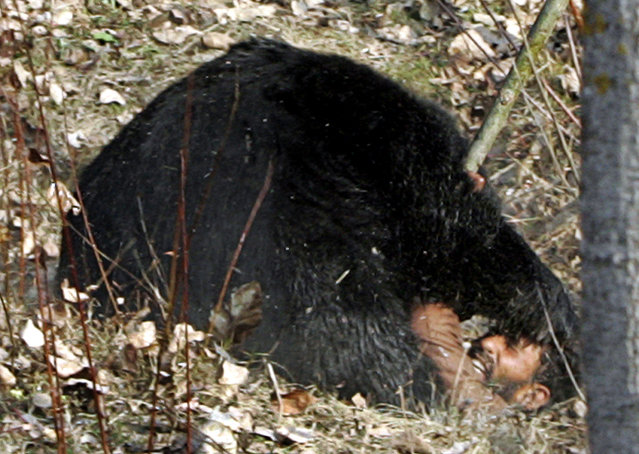 An Asiatic black bear mauls local villager Makhan Khan, who was with a group of men hunting the bear, near the village of Gasoo on the outskirts of Srinagar, November 2007. Khan suffered multiple injuries in the attack. (Photo by Danish Ismail/Reuters) 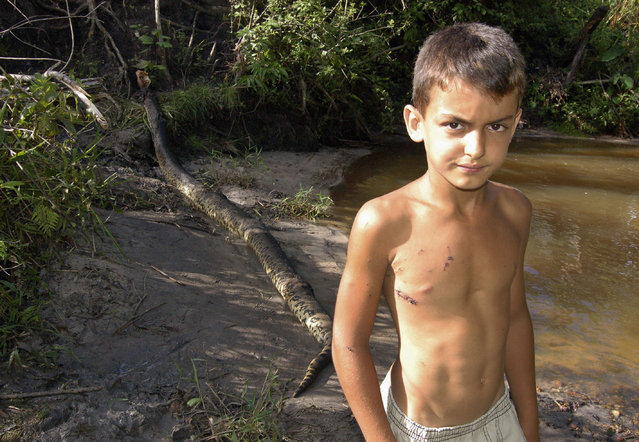 Matheus Pereira de Araujo, 8, stands in front of the 15 foot anaconda that attacked him a day earlier while playing near a creek on his grandfather's farm, in Cosmorama, Brazil, February 2007. Matheus' 66-year-old grandfather, Joaquim Pereira, heard his grandson's screams and wrestled the snake for nearly half an hour before finally killing it with stones and a machete. (Photo by Glauce Sereno/Diario de Votuporanga/Reuters) 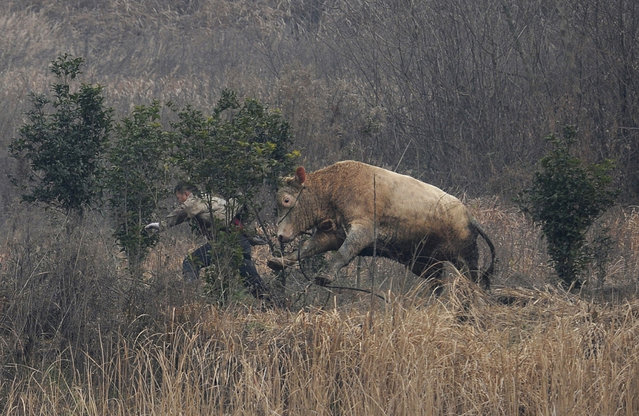 A cow, which escaped from a truck, attacks a farmer trying to catch it in Liangdun village of Nangang township, Anhui province, China, December 2013. The cow attacked several farmers before being shot dead by policemen, local media reported. (Photo by Reuters/China Daily) 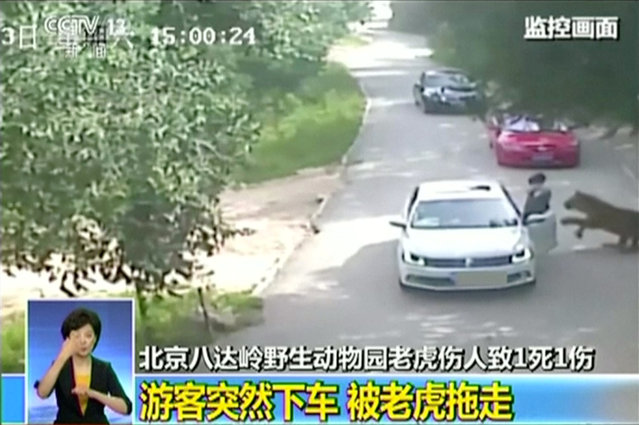 A tiger approaches a woman before attacking her, after she exited a car in a Beijing wildlife park, July 23, 2016. A woman was mauled to death and another injured by a Siberian tiger. Visitors are warned not to get out of their cars, but some disobey the rule. (Photo by Courtesy CCTV/Reuters TV) 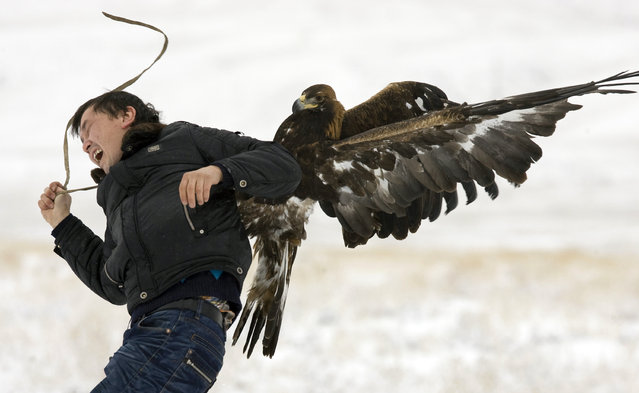 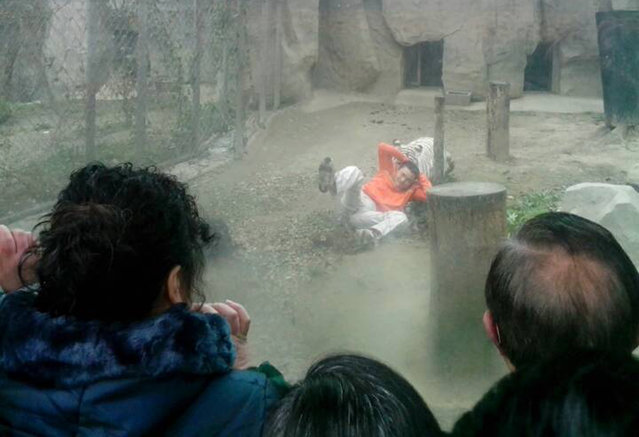 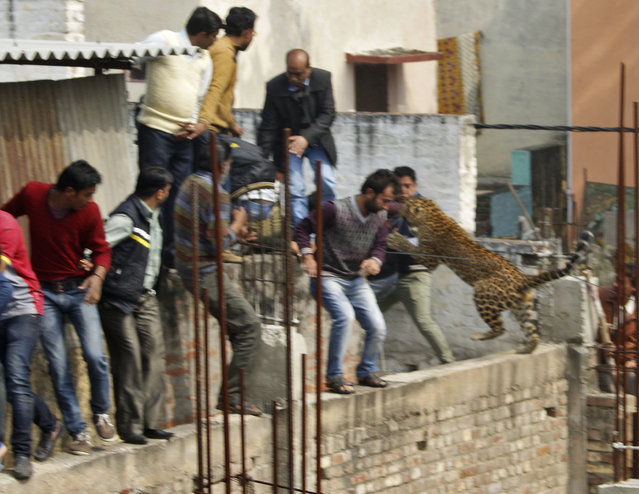 A leopard jumps at people at a structure undergoing construction at a residential area in Meerut, in the northern Indian state of Uttar Pradesh, February 2014. The animal was briefly trapped in an empty ward at a hospital, but it escaped before it could be fully tranquillised. A wild leopard ran through the busy streets of Meerut, a city 40 miles north of New Delhi, India, injuring seven people as officials armed with tranquilizer darts and sticks tried to capture it. One police officer was treated for a large gash in his shoulder. The big cat ran across rooftops, and into a movie theater, a hospital, and construction sites. (Photo by Reuters/Stringer) 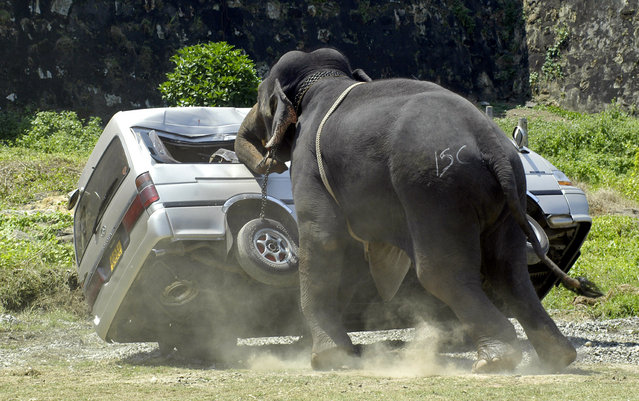 Abey, an 18-year-old elephant, destroys a minibus after throwing its rider and going on a rampage during Sri Lanka’s sixth annual elephant polo tournament in Galle, February 2007. The 4-ton elephant was subdued after crushing the Spanish team’s minibus. (Photo by Buddhika Weerasinghe/Reuters) 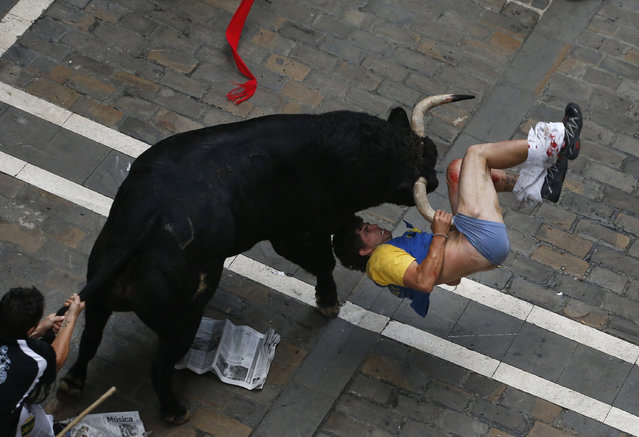 A runner is gored by an El Pilar fighting bull on Estafeta street during the sixth running of the bulls of the San Fermin festival in Pamplona, Spain, July 2013. The runner was gored three times. (Photo by Susana Vera/Reuters) 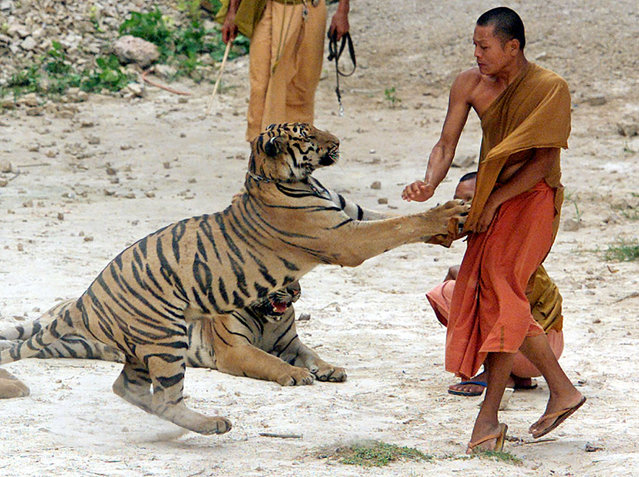 A Thai Buddhist Monk fends off a playful attack from an Asian Tiger at the Wat Pa Luangtabua temple in Sai Yok, western Thailand, May 22, 2001. (Photo by Jason Reed/Reuters) 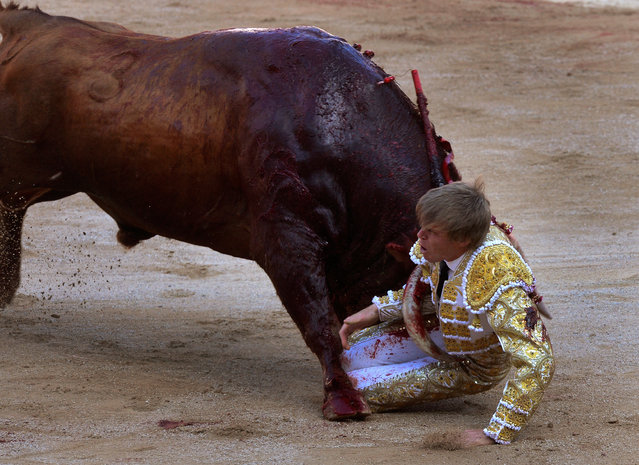 Spanish bullfighter Javier Jimenez is attacked by a bull during a bullfight at the San Fermin festival in Pamplona, July 2016. (Photo by Vincent West/Reuters) 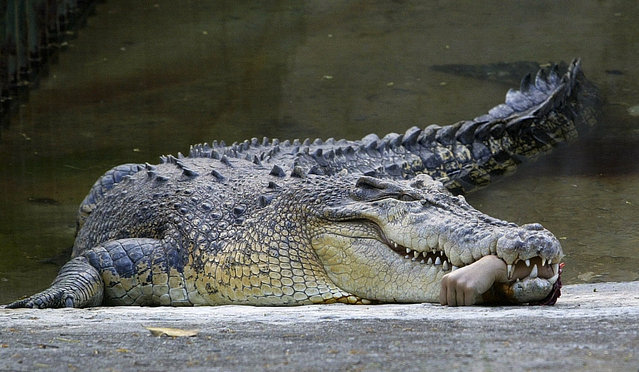 A crocodile at a zoo in the southern Taiwan city of Kaohsiung holds the forearm of a zoo veterinarian in its teeth, April 2007. Surgeons in Taiwan have reattached a vet's arm, after it was bitten off by a crocodile as he tried to give it an anaesthetic injection. His attacker is one of a pair of Nile crocodiles kept at Shoushan zoo. Nile crocodiles are known to be man-eaters, but are also listed as an endangered species. (Photo by Frank Lin/Reuters)
Edit Del
31 Jul 2016 11:14:00, post received 0 comments
Publication archive:
←   →
Popular tags:
All tags
Last searches: