Educative “The Xikrin-Kayapo: People of the Big Water” 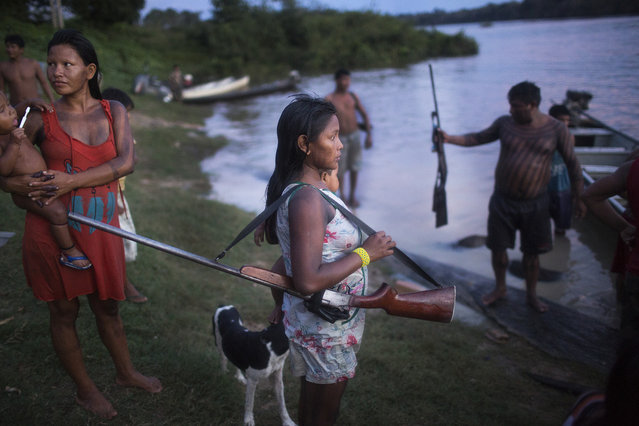 A Xikrin woman holds her husband's shotgun while he cleans freshly hunted peccary in the river. According to tradition, Xikrin women are not allowed to leave the village while their husbands are out hunting a wife must patiently wait for his return. (Photo and caption by Taylor Weidman)
Details
13 Dec 2013 09:32:00,post received 0 comments
Fact Spain Marks Holy Week 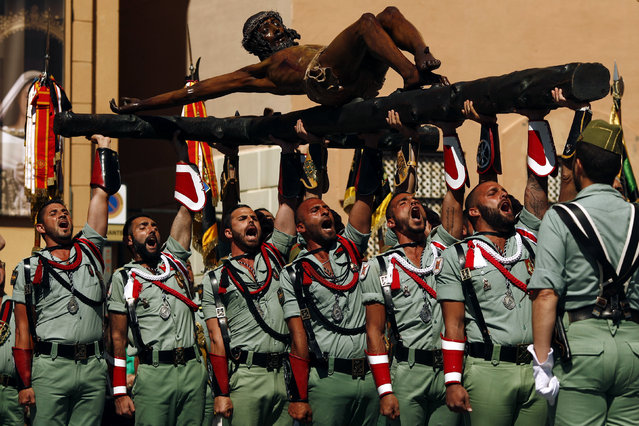 Spanish legionnaires sing an anthem as they carry a statue of the Christ of Mena outside a church during a ceremony before they take part in the “Mena” brotherhood procession in Malaga, southern Spain, March 24, 2016. (Photo by Jon Nazca/Reuters)
Details
25 Mar 2016 13:43:00,post received 0 comments
Fact Religion this Week 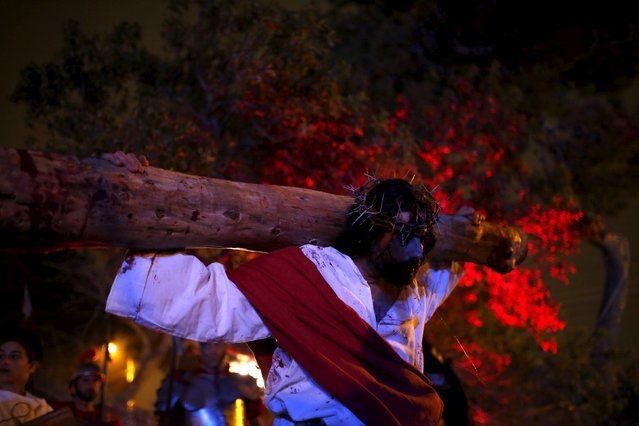 An actor portraying Jesus Christ takes part in the interactive street-theatre Passion play “Il-Mixja” (The Way), one of a series of Holy Week activities in the run-up to Easter, in the grounds of Mount Carmel Mental Hospital in Attard, outside Valletta, Malta, March 22, 2016. (Photo by Darrin Zammit Lupi/Reuters)
Details
25 Mar 2016 13:21:00,post received 0 comments
Fact Entertainment this Week 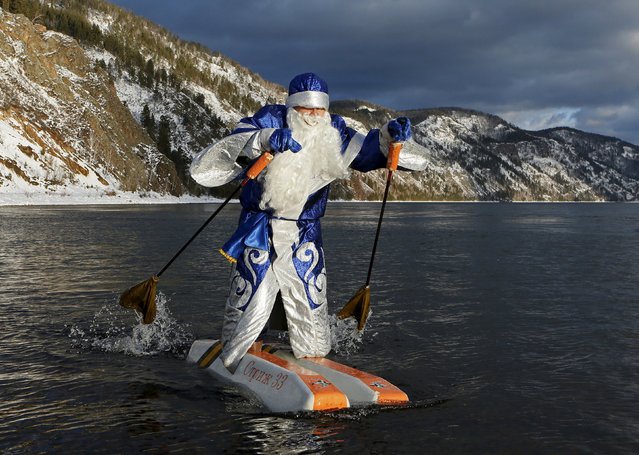 Nikolai Vasilyev, 62, dressed as Father Frost, Russian equivalent of Santa Claus, water-skis along the Yenisei River outside Siberian city of Krasnoyarsk, Russia, December 10, 2015. Vasilyev, a teacher of the Krasnoyarsk Aerospace Academy, constructed the self-made water skis to travel on the water surface. The skis are made of plastic foam and the sticks are designed to propel him forward. (Photo by Ilya Naymushin/Reuters)
Details
12 Dec 2015 08:04:00,post received 0 comments
Fact Retro Beastliness [Oldies] 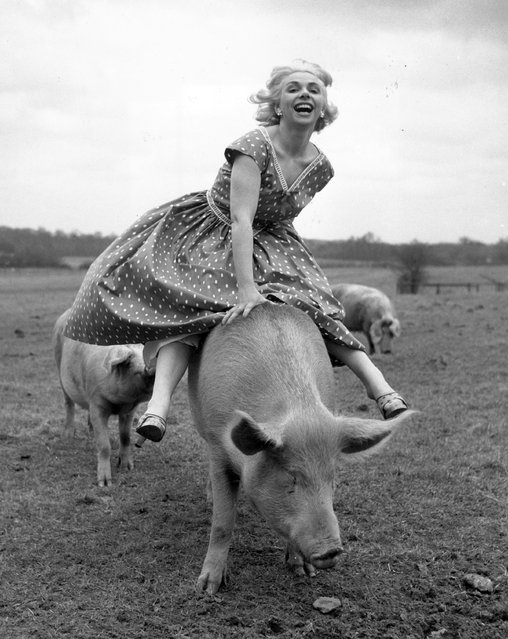 Horse racing commentator Joanne Mathews takes a break from the horses and has some fun with a local pig. 22nd March 1956. (Photo by John Pratt/Keystone Features). P.S. All pictures are presented in high resolution.
Details
10 Sep 2012 07:48:00,post received 0 comments
Fact A Look at Life in USA, Part 1/2 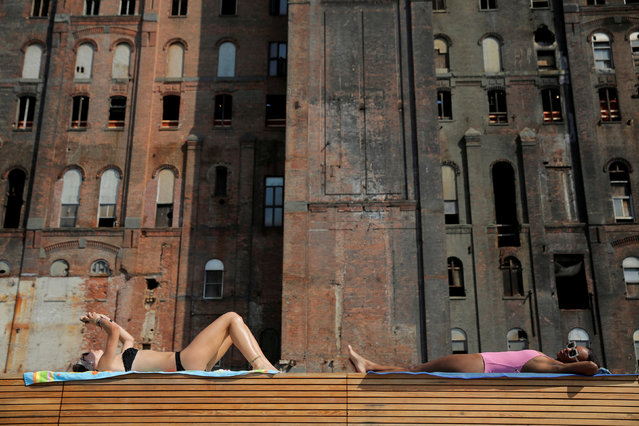 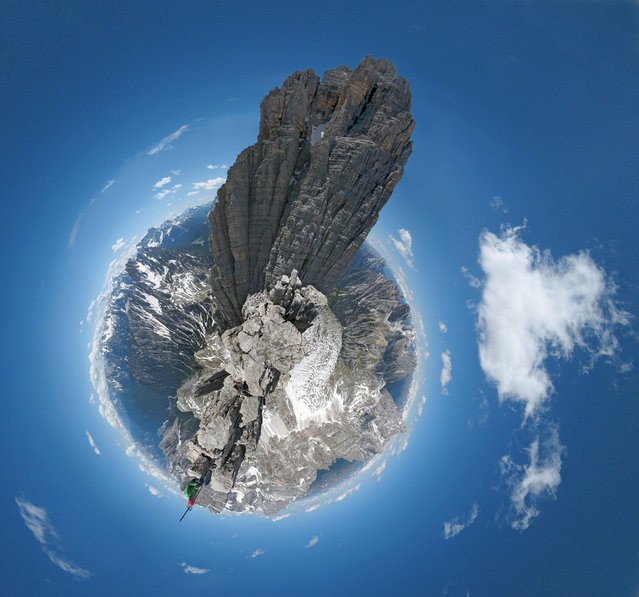 These are the amazing panoramic photographs that look like little planets. They were taken by photographer Dan Arkle, 34, from Sheffield, UK. He said: “On a sharp summit, you feel literally on top of the world, with dramatic views in all directions, including straight down. I tried using conventional photography to capture this feeling, but even with a wide angle lens I couldnt get all the view in the image”. Here: “Taken at the tiny summit of Cima Piccola in the the Tre Cima group in the Dolomites, Italy. The large peak is Cima Grande Some remote peaks have a summit register, and my climbing partner Steve can be seen signing this in the bottom of the picture”. (“Little Planets” Project. Photo and comment by Dan Arkle)
Details
06 Jun 2015 09:52:00,post received 0 comments
Fact New Jersey's Camel Derby 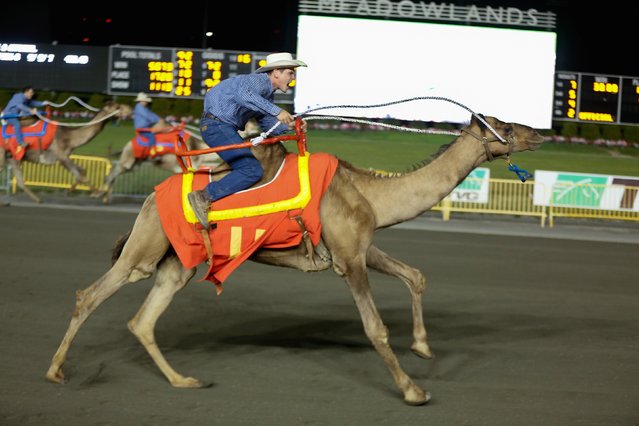 Camelot, with rider Kris Anderson, wins an exhibition race billed as “The Cameltonian” at the Meadowlands Race Track in East Rutherford, New Jersey June 21, 2014. Run by Hedrick's Promotions in Nickerson, Kansas, this is the third year the race has been run at the track, in tandem with an ostrich race. (Photo by Ray Stubblebine/Reuters)
Details
29 Jun 2014 09:14:00,post received 0 comments
Popular tags:
All tags
Last searches: