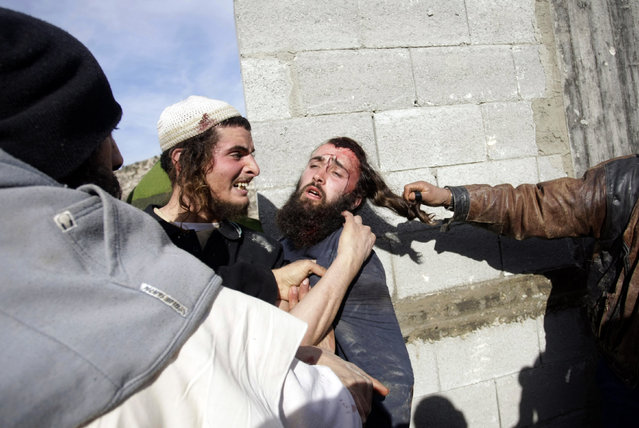 Palestinians hit injured Israeli settlers, center, detained by Palestinian villagers in a building under construction near the West Bank village of Qusra, southeast of the city of Nablus, Tuesday, January 7, 2014. Palestinians held more than a dozen Israeli settlers for about two hours Tuesday in retaliation for the latest in a string of settler attacks on villages in the area, witnesses said. The military said the chain of events apparently began after Israeli authorities removed an illegally built structure in Esh Kodesh, a rogue Israeli settlement in the area. In recent years, militant settlers have often responded to any attempts by the Israeli military to remove parts of dozens of rogue settlements, or outposts, by attacking Palestinians and their property. The tactic, begun in 2008, is known as “price tag”. (Photo by Nasser Ishtayeh/AP Photo)
Details
10 Jan 2014 11:32:00,post received 0 comments
Fact Israel Southern Recovery 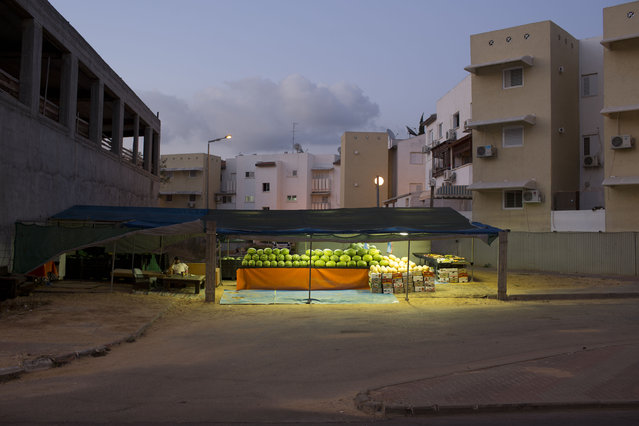 In this Tuesday, June 23, 2015, photo, an Israeli vendor waits for clients at the southern Israeli town of Sderot, next to the Israel-Gaza border. A year after the Gaza war, the community in southern Israel, long battered by rockets from the Hamas-run territory next door, has slowly recovered and is even seeing a quiet boom. (Photo by Oded Balilty/AP Photo)
Details
05 Jul 2015 10:38:00,post received 0 comments
Fact Israel's Batgirl 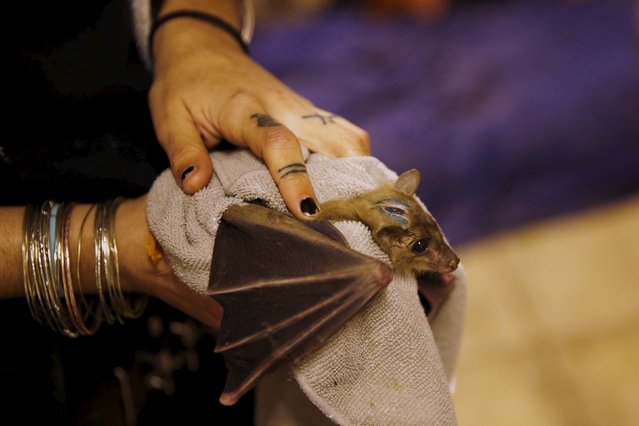 Israeli woman, Nora Lifschitz, 28, holds an injured Egyptian fruit bat at her home in Tel Aviv February 22, 2016. Lifschitz says that she began caring for injured fruit bats from her home two years ago and now has some 70 of the flying mammals which she plans to release back into nature once they are healthy. (Photo by Baz Ratner/Reuters)
Details
24 Feb 2016 13:10:00,post received 0 comments
Fact Hot Air Balloon Festival in Israel 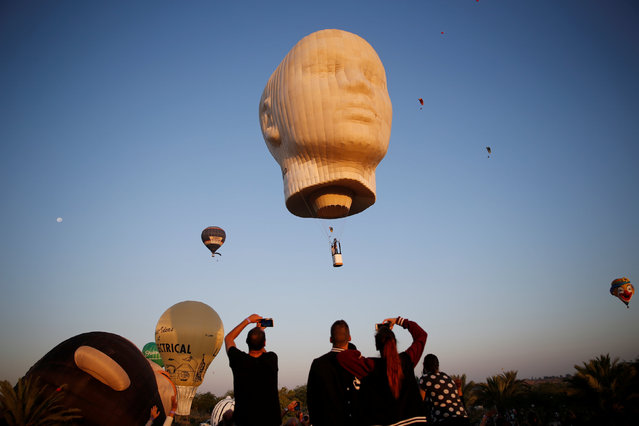 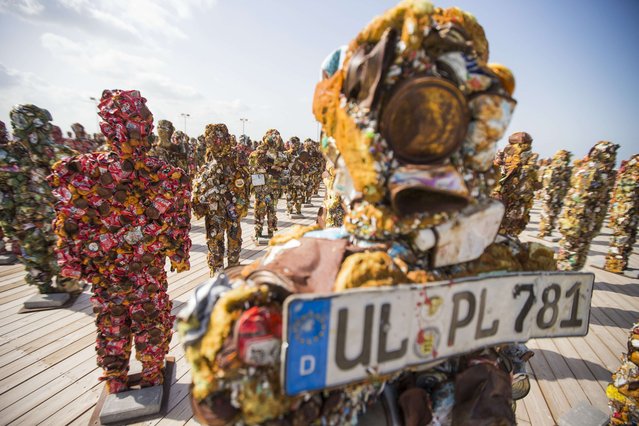 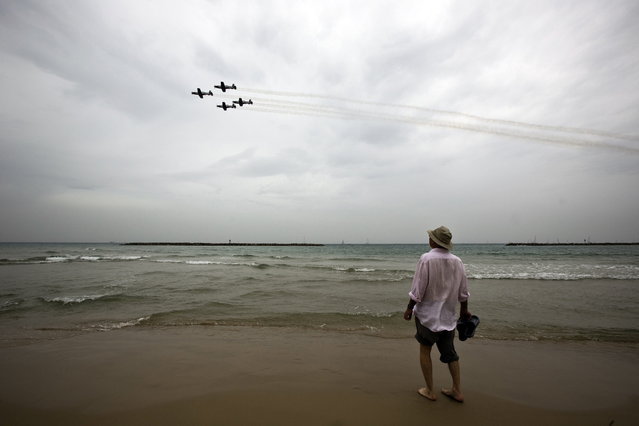 A man watches Israeli Air Force planes fly over the Mediterranean Sea from a beach at Tel Aviv during an aerial show as part of celebrations for Israel's Independence Day to mark the 66th anniversary of the creation of the state, May 6, 2014. (Photo by Nir Elias/Reuters)
Details
07 May 2014 12:35:00,post received 0 comments
Sad Street Cats in Israel 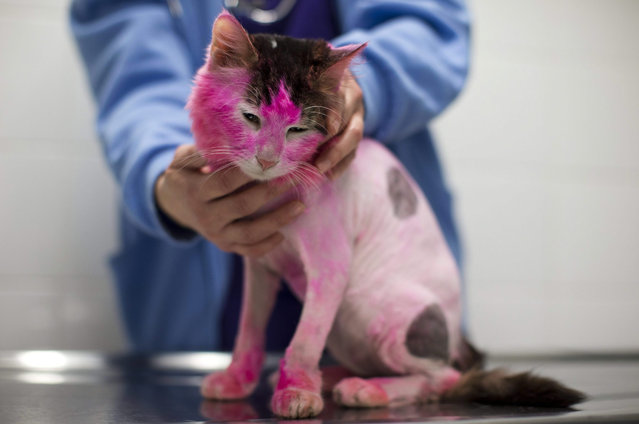 “Bazooka”, a one year old stray cat, is treated at the SPCA (Society for Prevention of Cruelty to Animals) clinic in Tel Aviv, Israel, 06 January 2016. Bazooka arrived at the clinic in critical condition after he went through severe abuse with bruises all over his body and painted with pink oxidation. The Israeli street cat population is estimated to be about two million. Without enough financial support from the state, animal rights organizations find it difficult to keep the up with the pace when it comes to spaying and neutering feral cats, causing the population to grow. (Photo by Abir Sultan/EPA)
Details
27 Jan 2016 13:17:00,post received 0 comments
Fact Palestinians Enjoy the Israel's Beaches 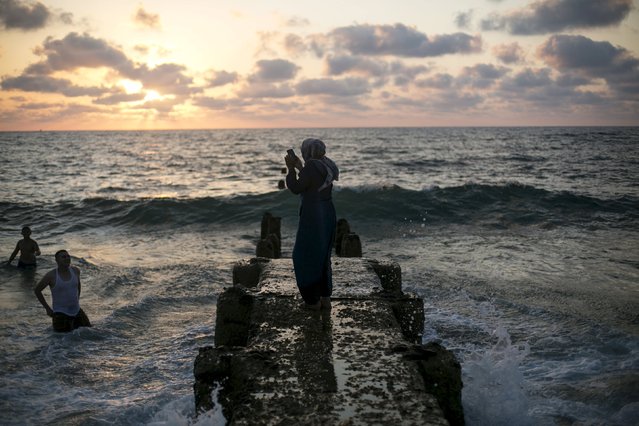 A Muslim woman takes a picture of a man in the water of the Mediterranean sea in Tel Aviv during Eid al-Fitr, which marks the end of the holy month of Ramadan July 19, 2015. Thousands of Palestinians used permits given by the Israeli authorities allowing many to enjoy the beaches along Israel's Mediterranean shoreline during the Eid al-Fitr holiday. (Photo by Baz Ratner/Reuters)
Details
20 Jul 2015 10:10:00,post received 0 comments
Popular tags:
All tags
Last searches: