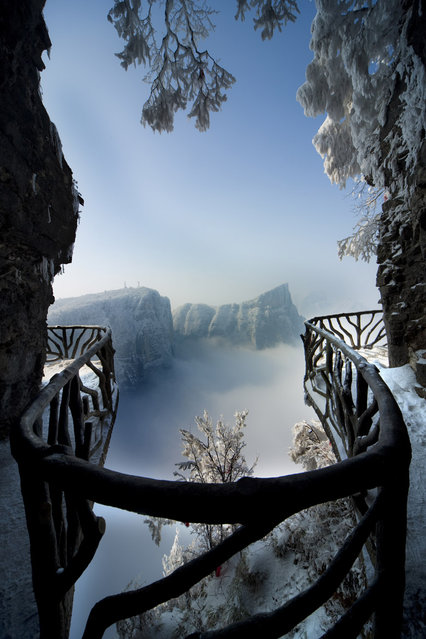 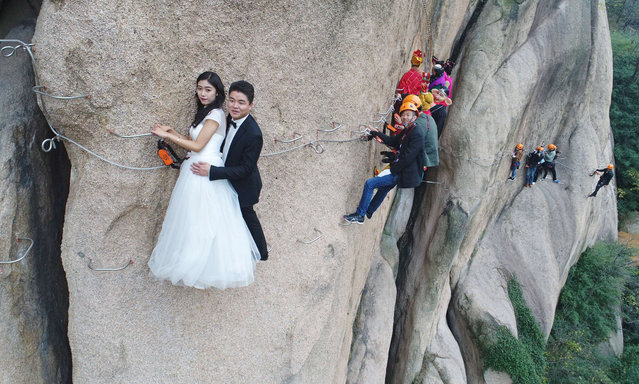 A newlywed couple dangling from a cliff face poses for wedding photos at the Chaya Mountain scenic spot on November 11, 2017 in Zhumadian, Henan Province of China. Chaya Mountain scenic spot was the shooting place for TV series “Journey to the West” and working staff dressed as main characters in this TV series to send the blessing to the newly-weds. (Photo by Sipa Asia/Rex Features/Shutterstock)
Details
15 Nov 2017 03:30:00,post received 0 comments
Fact Sherpas: the Invisible Men of Everest 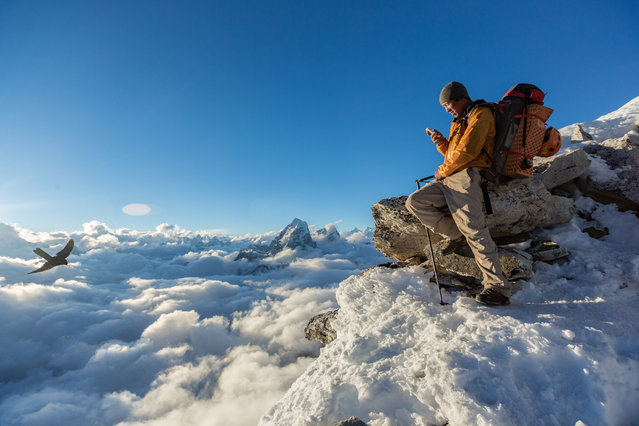 Finding just the right spot above the clouds at Camp 1 on Ama Dablam, Danuru Sherpa uses his iPhone to catch up with friends and family. Even at 18,500 feet (5,654 meters), climbers here can check their email and other dispatches from the world below. (Photo by Aaron Huey/National Geographic)
Details
28 Apr 2014 09:14:00,post received 0 comments
Fact Holy Men of Nepal 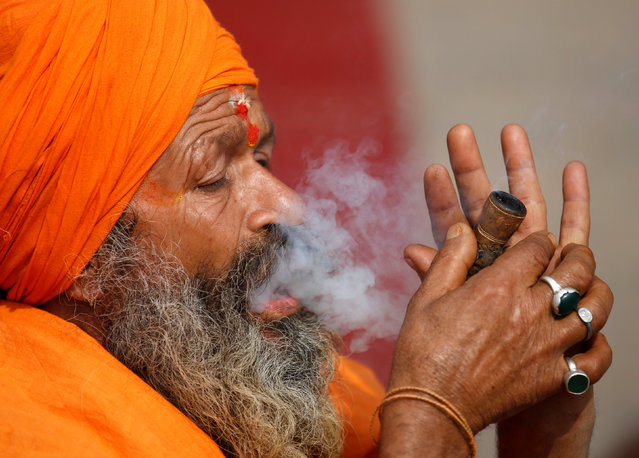 A Hindu holy man, or sadhu, smokes marijuana in a chillum at the premises of Pashupatinath Temple, ahead of the Shivaratri festival in Kathmandu, Nepal February 15, 2017. (Photo by Navesh Chitrakar/Reuters)
Details
17 Feb 2017 00:00:00,post received 0 comments
Fact “Mens Sana in Corpore Sano” 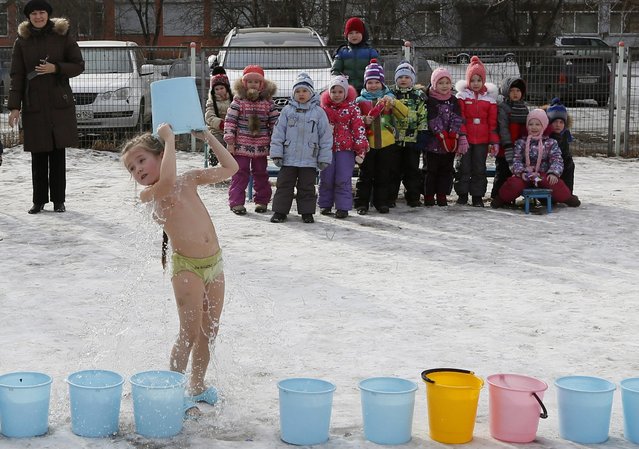 Children watch their classmate pour cold water on herself under the watch of a fitness coach at a local kindergarten in Russia's Siberian city of Krasnoyarsk, March 11, 2015. The program, which also involves sports training and sauna usage, has been practiced by the kindergarten for more than 15 years as they believe it has health benefits and keeps the children fit. Children start pouring cold water on themselves outdoors after about three years of training and undergoing medical tests, and the kindergarten is the only one in the region that practices these exercises, according to employees. (Photo by Ilya Naymushin/Reuters)
Details
19 Mar 2015 13:18:00,post received 0 comments
Charming Fann Mountains in Tajikistan 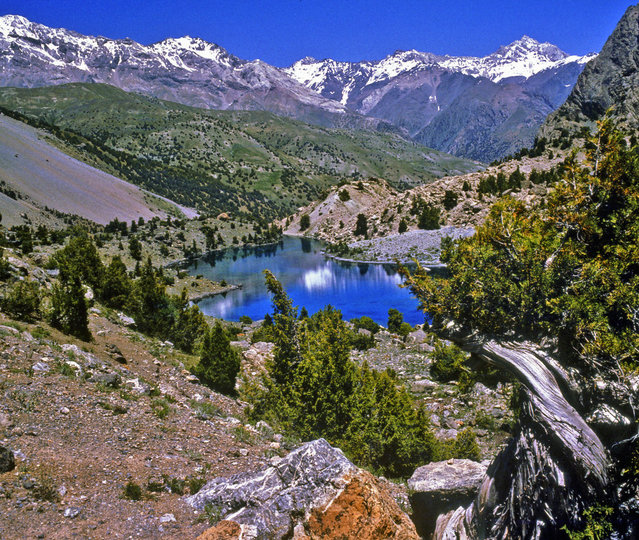 Fann Mountains are part of the western Pamir-Alay mountain system and are located in Tajikistan's Sughd Province between the Zarafshan Range to the north and the Gissar Range to the south (see map of Fann Mountains). In the east-west direction they extend from Fandarya River to Archimaydan River, and the cluster of Marguzor lakes west of Archimaydan is also included in the Fanns.
Details
29 May 2013 11:45:00,post received 0 comments
Touching Some Photos: Mountains 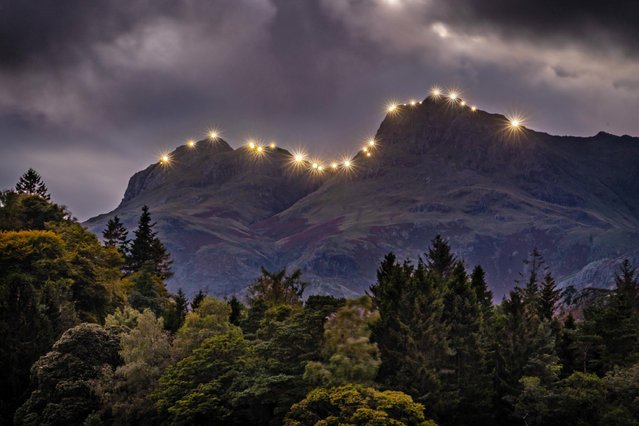 The Langdale Pikes in the Lake District in North West England are illuminated on September 14, 2020 by a team of 30 climbers to celebrate the 50th anniversary of the local mountain rescue service. (Photo by Tom Mcnally/Triangle News)
Details
25 Jun 2021 10:17:00,post received 0 comments
Fact K2 – the Savage Mountain 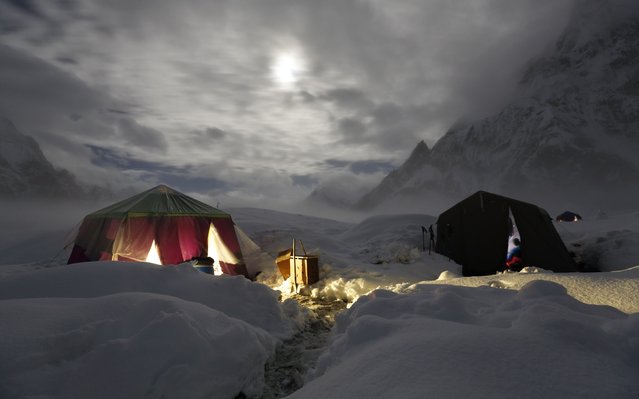 The moon illuminates the snow-covered Concordia, the confluence of the Baltoro and Godwin-Austen glaciers, near the world's second highest mountain the K2 (8,000 meters) in the Karakoram mountain range in Pakistan September 6, 2014. While other parts of Pakistan and northern India were flooded, Concordia in the Karakoram mountain range was covered with a seasonally unusual amount of snow. Geographically, Pakistan is a climbers paradise. It rivals Nepal for the number of peaks over 7,000 meters and is home to the world's second tallest mountain, K2, as well as four of the world's 14 summits higher than 8,000 meters. (Photo by Wolfgang Rattay/Reuters)
Details
24 Oct 2014 12:27:00,post received 0 comments
Popular tags:
All tags
Last searches: