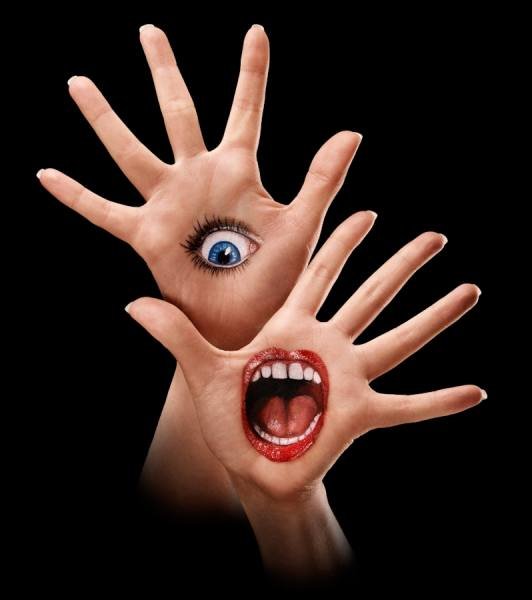 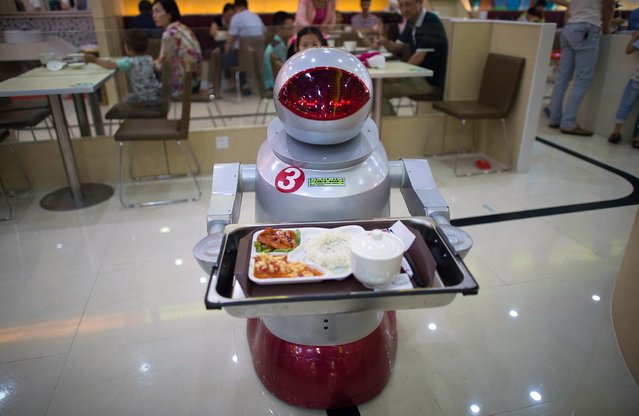 Located in Kunshan, eastern China, the restaurant relies on over a dozen machines for tasks such as greeting customers, waiting on tables and cooking basic meals. The eatery becomes the third café in the world to rely on the use of robot employees, potentially giving a glimpse into how future businesses could operate. Photo: This photo taken on August 13, 2014, shows a robot carrying food to customers in a restaurant in Kunshan. It's more teatime than Terminator – a restaurant in China is electrifying customers by using more than a dozen robots to cook and deliver food. (Photo by Johannes Eisele/AFP Photo)
Details
24 Aug 2014 09:40:00,post received 0 comments
Wow Stupefying Hand-Knitted Hammock is Suspended 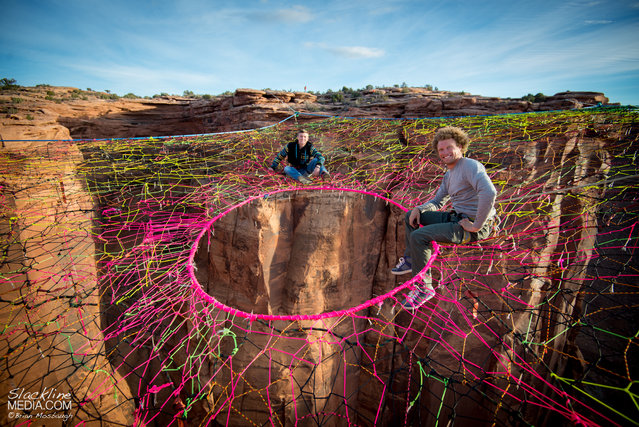 Exhilaration beyond imaginable, intense concentration on a single point, and complete freedom of soul – all these things very accurately describe the art of highlining. Highlining is a branch of a new sport called slacklining, which involves walking on special webbing secured between two points. Andi Lewis is one of the most famous slackliners in the world, particularly due to his performance during Superbowl Halftime Show in 2012. He never fails to surprise people with an amazing stunt or a project. This time he and his friends have created a completely incredible hand-knitted hammock located hundreds of feet above the ground. Just getting to this hammock requires immense skills and bravery. But once you’re finally there, you can rest a while, before mustering up the courage to go back across a narrow line with nothing but thin air beneath your feet.
Details
27 Feb 2015 18:38:00,post received 0 comments
Fact Life without Hands 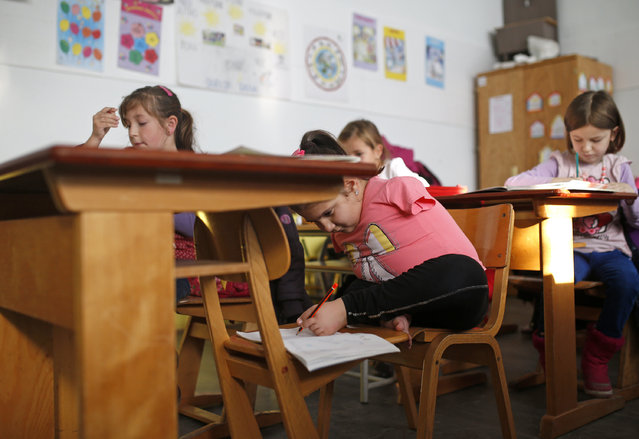 Ramela Meseljevic, a 7 year-old girl born without both of her hands and one of her legs shorter than the other, writes during classes in the her school in Begov Han, Bosnia and Herzegovina December 2, 2015. International Day of Disabled Persons is observed on December 3 with the theme "Inclusion matters: access and empowerment of people of all abilities". (Photo by Dado Ruvic/Reuters)
Details
05 Dec 2015 08:02:00,post received 0 comments
Educative The Giant Hand of Atacama 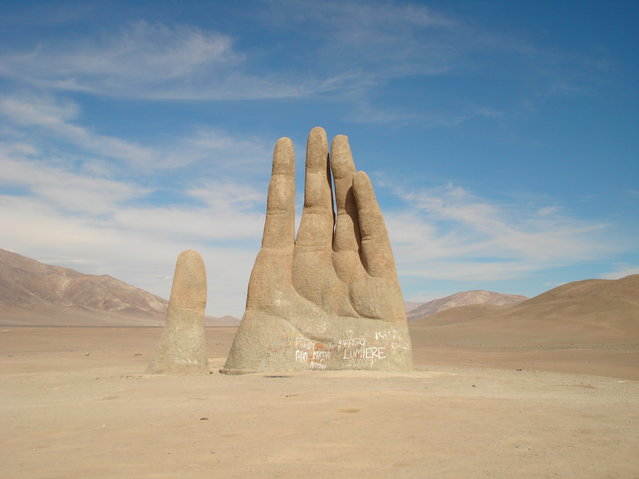 The Mano de Desierto is a large-scale sculpture of a hand located in the Atacama Desert in Chile, 75 km to the south of the city of Antofagasta, on the Panamerican Highway. The nearest point of reference is the “Ciudad Empresarial La Negra” (La Negra Business City). The sculpture was constructed by the Chilean sculptor Mario Irarrázabal at an altitude of 1,100 meters above sea level. Irarrázabal used the human figure to express emotions like injustice, loneliness, sorrow and torture. Its exaggerated size is said to emphasize human vulnerability and helplessness. The work has a base of iron and cement, and stands 11 metres (36 ft) tall. Funded by Corporación Pro Antofagasta, a local booster organization, the sculpture was inaugurated on March 28, 1992.
Details
21 Dec 2013 10:18:00,post received 0 comments
Fact War in a Child's Hands 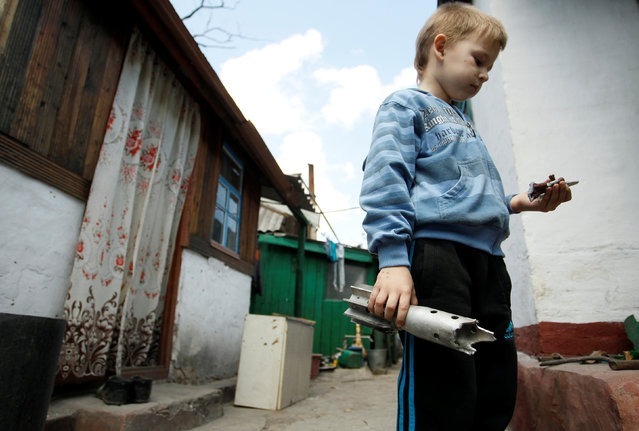 A boy holds the remains of a mortar shell which hit a residential building in the village of Staromikhailovka, outside the separatist-held city of Donetsk, Ukraine, May 24, 2016. (Photo by Alexander Ermochenko/Reuters)
Details
25 May 2016 13:26:00,post received 0 comments
Fact Evolution of Robots 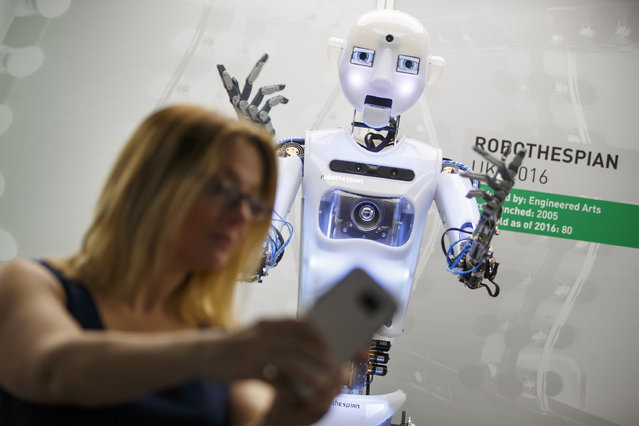 A woman takes a selfie with “RoboThespian” at Robots, a major new exhibition at Science Museum in London, England on February 7, 2017. Exhibition showcases 500-year history of robots, with over 100 robots and the largest collection of humanoid robots ever displayed. (Photo by Tolga Akmen/Anadolu Agency/Getty Images)
Details
09 Feb 2017 00:02:00,post received 0 comments
Wow Hand Design by Philip Levine 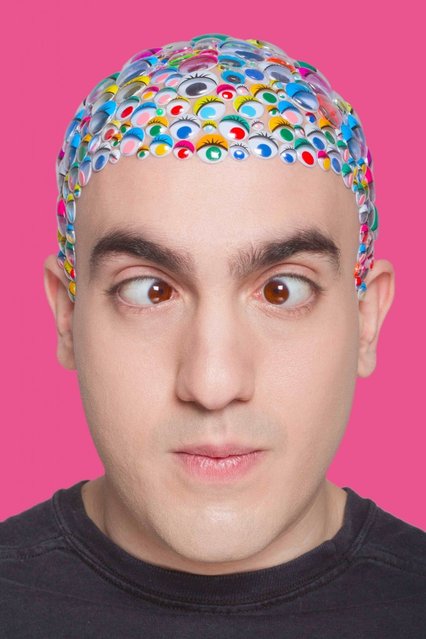 London born Philip started using his head as a canvas for creativity back in 2006 when he began to go bald. He did not want to conform to shaving his head like everyone else so started using it as an art form to express. Philip's head designs have now become iconic around the world. As a tastemaker, he has gained recognition with sites including Trend Hunter and NotCot with such terms as 'Baldazzling'. His designs are inspiring men and women alike who might be bald.
Details
11 Apr 2015 09:55:00,post received 0 comments
Popular tags:
All tags
Last searches: