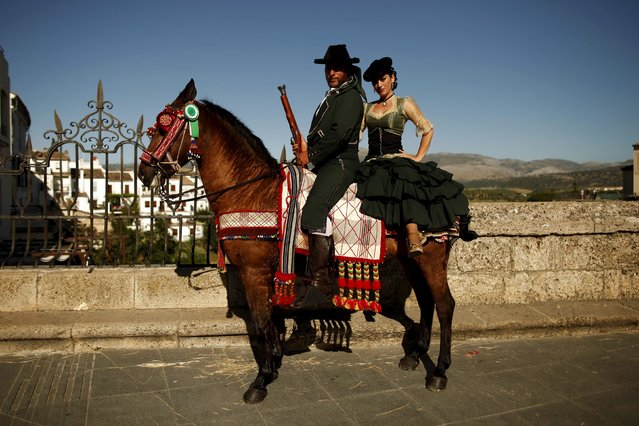 Francisco Javier Moreno (L), 35, and his wife Maria Auxiliadora Canca, 34, dressed as bandits pose for a photo with their horse as they participate in the third edition of “Ronda Romantica” (Romantic Ronda) in Ronda, southern Spain, May 16, 2015. Ronda Romantica is a cultural, historical and tourist event during the three days where thousands of people of Ronda and about fifty towns around of “Serrania de Ronda” (Ronda Mountain Ranges), dressed in traditional costumes, recreate the era of the bandits, drovers and romantic travelers in the nineteenth century. (Photo by Jon Nazca/Reuters)
Details
18 May 2015 11:32:00,post received 0 comments
Fact The XVIII 101km International Competition in Southern Spain 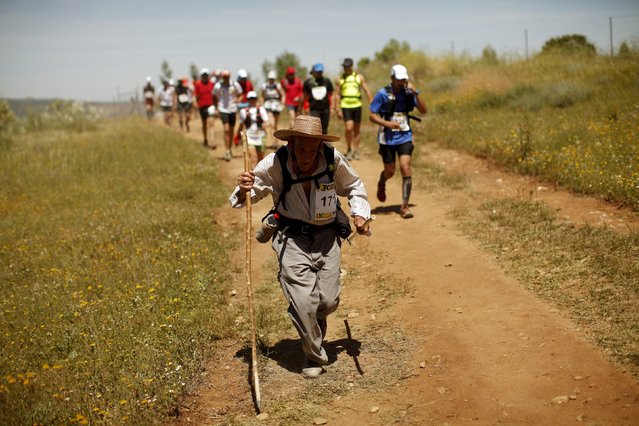 Spanish runner Francisco Contreras, 77, known as “Super Paco”, runs as he participates in the XVIII 101km international competition in the outskirts of Ronda, southern Spain, May 9, 2015. About 7,000 participants, including runners, mountain bikers and duathletes, run a track of 101 km (63 miles) in less than 24 hours through the “Serrania de Ronda” (Ronda Mountain Range) during this competition organised by the 4th Tercio (Regiment) “Alejandro Farnesio” of the Spanish Legion. The Puente Nuevo is 120 metres (394 feet) high over the gorge of the river that divides the city of Ronda. Picture taken using long exposure. (Photo by Jon Nazca/Reuters)
Details
11 May 2015 12:17:00,post received 0 comments
Fact The Day in Photos – January 8, 2018 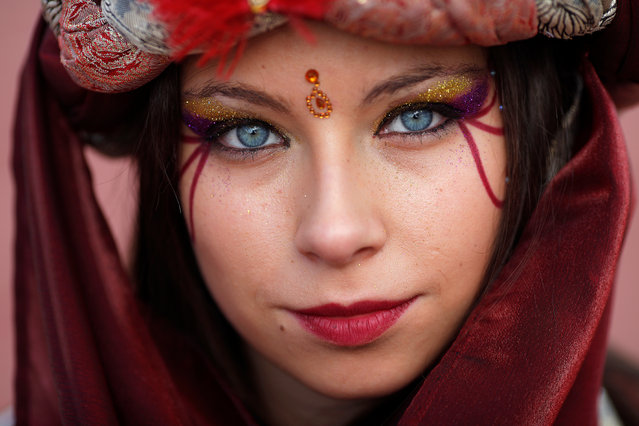 A girl dressed up as a emissary of the Three Wise Men poses for a photo as she waits for their arrival in a helicopter to take part in the traditional Epiphany parade in Ronda, Spain, January 5, 2018. (Photo by Jon Nazca/Reuters)
Details
08 Jan 2018 08:39:00,post received 0 comments
Fact The First International Biennial of Bullfighting 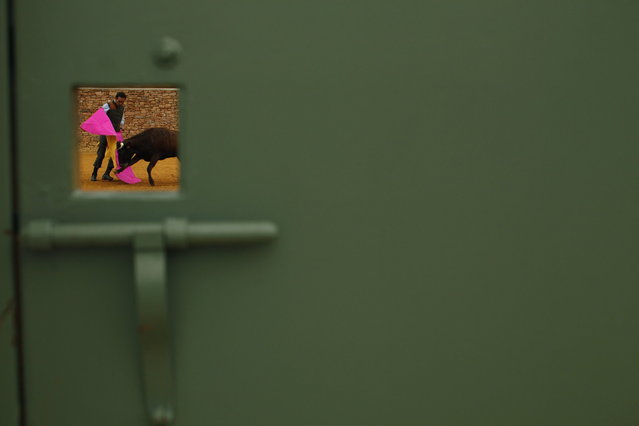 Spanish bullfighter Manuel Jesus “El Cid” is seen through a small window of a door as he performs a pass to a heifer during a “tentadero” (a small bullfight to check the bravery of calves and heifers which are not killed) during the first International Biennial of bullfighting at Reservatauro Ronda cattle ranch in Ronda, near Malaga February 17, 2013. Spain's parliament voted last Tuesday to consider protecting bullfighting as a national pastime, angering animal rights campaigners and politicians in two regions where the sport is banned. (Photo by Jon Nazca/Reuters)
Details
22 Feb 2013 11:15:00,post received 0 comments
Educative The Amazing Rock City in Spain 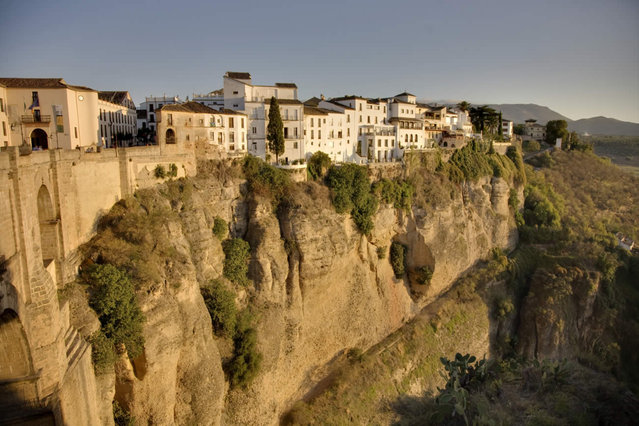 Ronda is a small Spanish town that it well known by many people around the world. It became a popular tourist destination due to its peculiar location. Some of its buildings are standing right next to the large cliff drop, making for a very scary sight, especially if you were to look down through one of their windows unaware of what kind of sight awaits you. If you ever find yourself looking for this ancient town, you can travel to it from Costa del Sol or Malaga. In the past, this town played a major strategic role due to its high elevation, which made defending it from invaders a lot easier.
Details
03 Mar 2015 11:40:00,post received 0 comments
Fact The Day in Photos – May 28, 2017 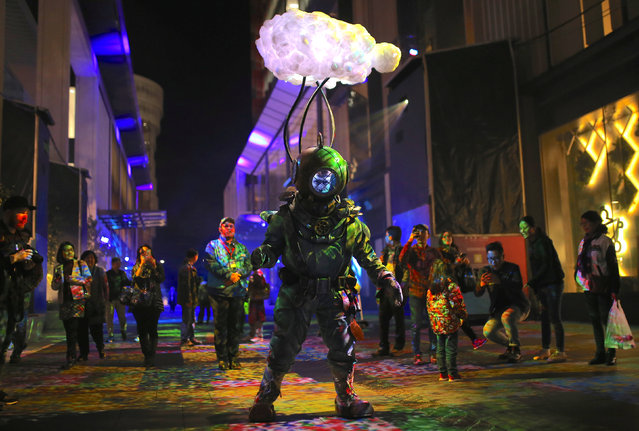 A man wearing an illuminated atmospheric diving suit as part of an installation titled “What Lies Beneath” looks at members of the public during the Vivid Sydney festival of light and sound in Sydney, Australia, May 26, 2017. (Photo by Steven Saphore/Reuters)
Details
28 May 2017 07:51:00,post received 0 comments
Fact Three Kings' Day 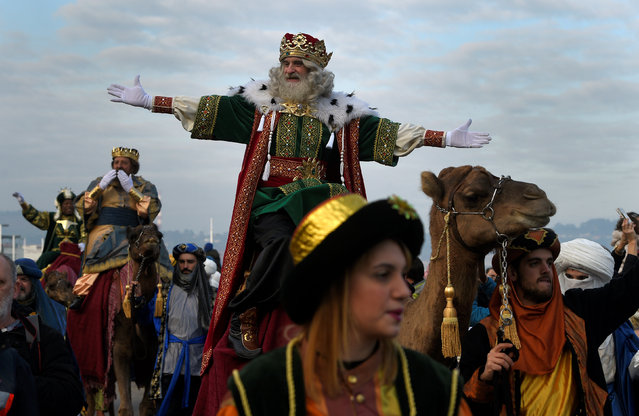 A man dressed as one of the Three Kings greets people during the Epiphany parade in Gijon, Spain January 5, 2017. (Photo by Eloy Alonso/Reuters)
Details
06 Jan 2017 13:33:00,post received 0 comments
Fact Animals this Week, Part 1/2 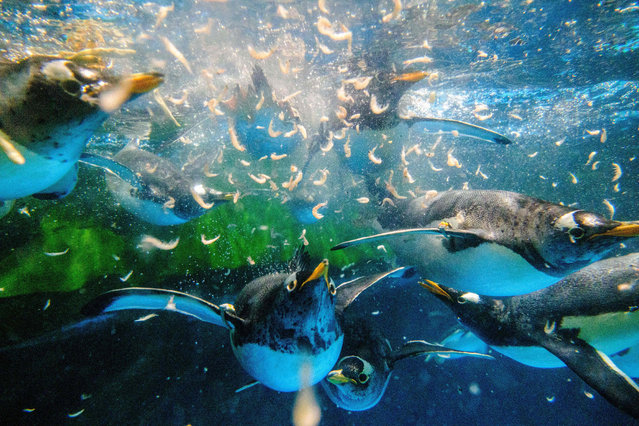 This picture taken on May 4, 2020 shows gentoo penguins chasing krill during feeding time in their enclosure at the Ocean Park theme park, which is currently closed due to the COVID-19 novel coronavirus, in Hong Kong. Save for an absence of gawping crowds, life for the penguins of Hong Kong's Ocean Park has been much the same during the coronavirus pandemic – but their carers have worked long shifts to keep the monochrome troupe healthy. (Photo by Anthony Wallace/AFP Photo)
Details
17 May 2020 00:01:00,post received 0 comments
Popular tags:
All tags
Last searches: