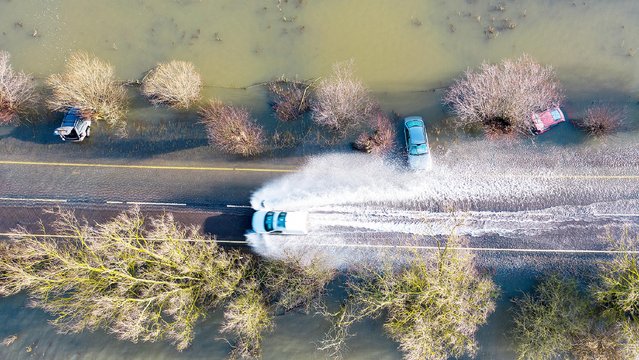 A car takes a risky journey on a partially flooded road in Welney, Norfolk, England on January 27, 2020. The other three cars had been completely submerged and four people had to be rescued from one of them. (Photo by Geoff Robinson Photography/The Times) 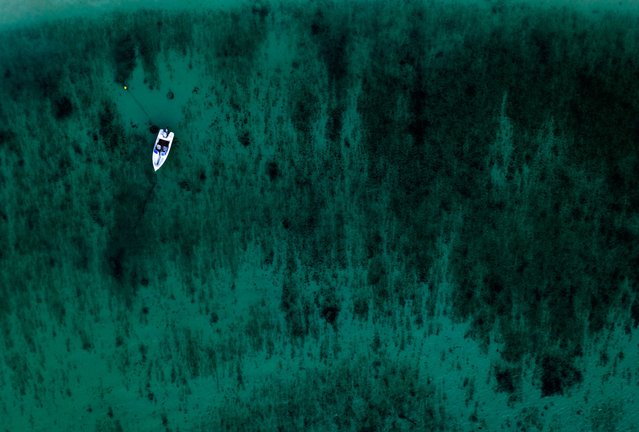 An aerial view shows a boat near the harbour in Sal Rei at Boa Vista island, Cape Verde, on January 06, 2020. (Photo by Ina Fassbender/AFP Photo) 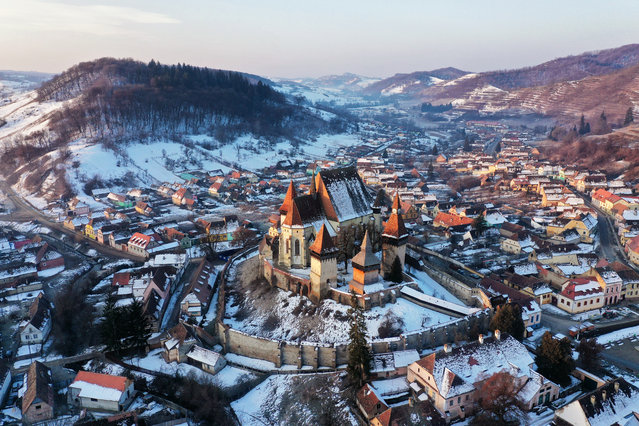 The village of Biertan and its fortified church are seen under a dusting of snow in Romania on February 20, 2019. (Photo by Amos Chapple/Radio Free Europe/Radio Liberty) 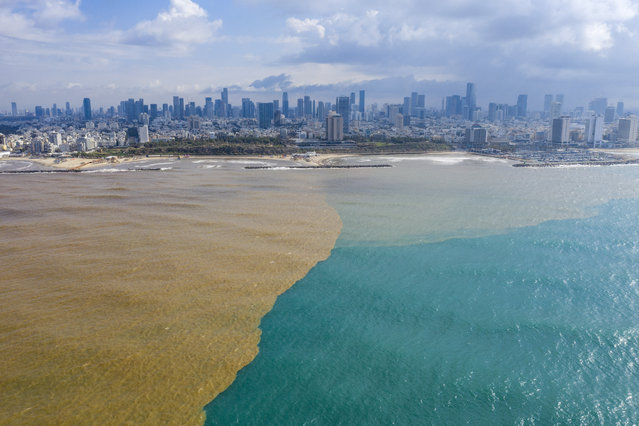 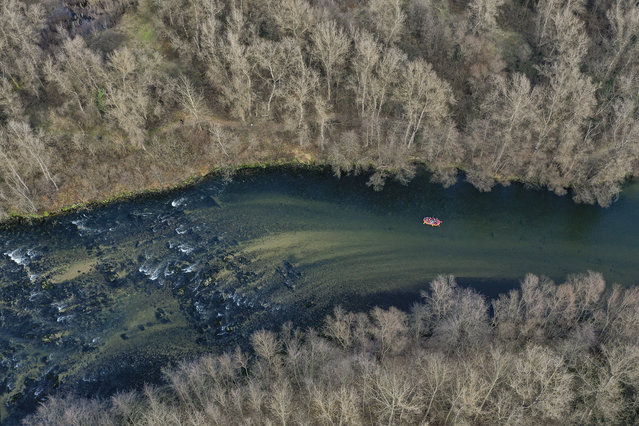 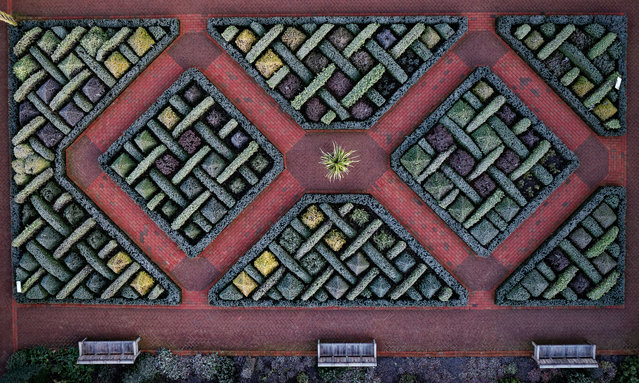 A frosty start at RHS Wisley in Surrey, England on January 19, 2020. Temperatures on Sunday night are expected to be even colder as a huge high pressure system takes hold over the country. (Photo by Chris Gorman/RHS) 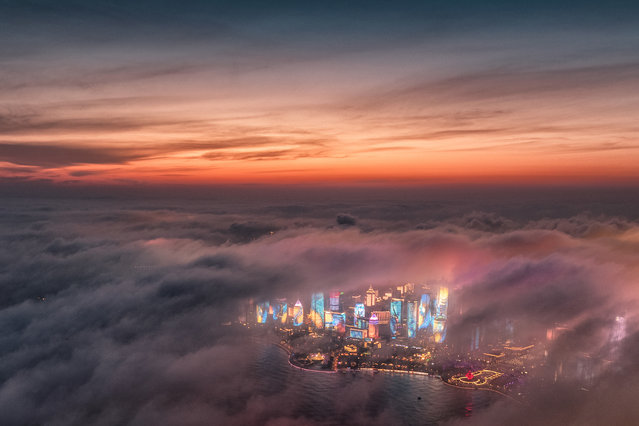 In this April 20, 2018, file aerial photo released by China's Xinhua News Agency, advection fog drifts across skyscrapers on the waterfront in Qingdao in eastern China's Shandong Province. Chinese leaders have long been sensitive about their communist country’s international image. Now, they are battling back, investing in diplomacy and a courtship of hearts and minds, just as the United States digs in on the Trump administration’s “America First” mindset. (Photo by Lu Hui/Xinhua via AP Photo/File) 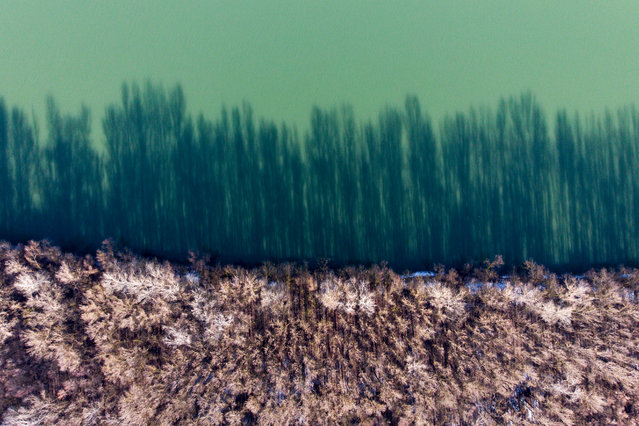 A picture taken with a drone shows coastal trees casting shadows on River Tisza at Tiszakeszi, Hungary, 29 January 2020. In the night of 30 January 2000, a dam at the gold mining company Aurul, a joint-venture of the Australian company Esmeralda Exploration and the Romanian government, holding contaminated waters, burst and spilled 100,000 cubic meters of cyanide-contaminated water (containing an estimated 100 tons of cyanide). The polluted waters spilled over farmlands and into the Somes river and reached the Tisza and then the Danube, killing large numbers of fish in Hungary, Serbia and Romania. The spill has been called the worst environmental disaster in Europe since the Chernobyl disaster. The Hungarian government on 16 July 2000 declared 01 February as the memorial day of the Tisza wildlife. (Photo by Zsolt Czeglédi/EPA/EFE) 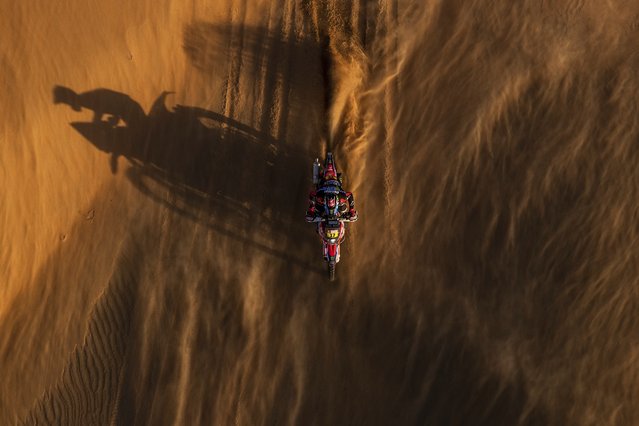 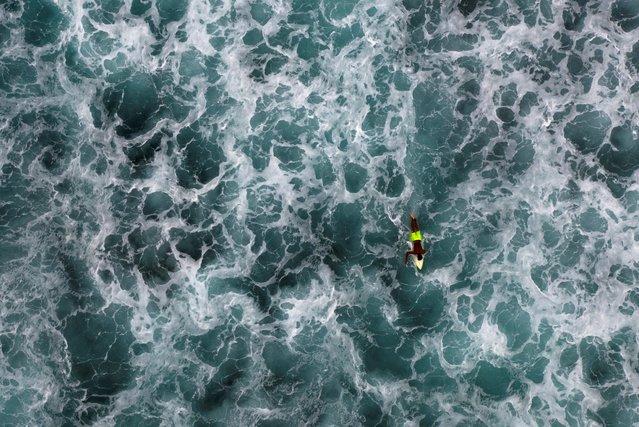 An aerial view shows a surfer on his board at the Praia de Cruz beach in Sal Rei on Boa Vista island, Cape Verde, on January 1, 2020. (Photo by Ina Fassbender/AFP Photo) 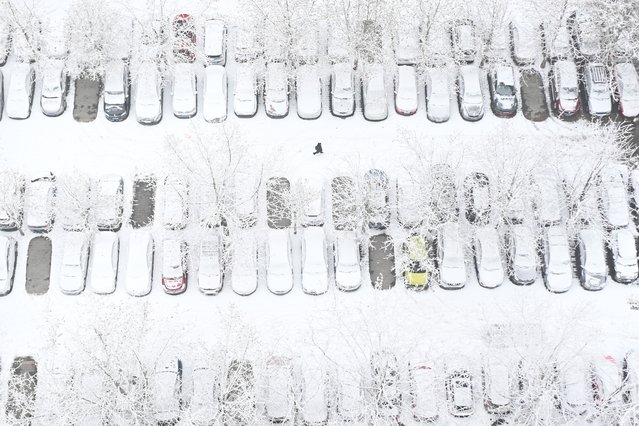 This aerial view shows a pedestrian walking across a parking lot in a residential area after snow fell in Beijing on January 6, 2020. (Photo by Wang Zhao/AFP Photo) 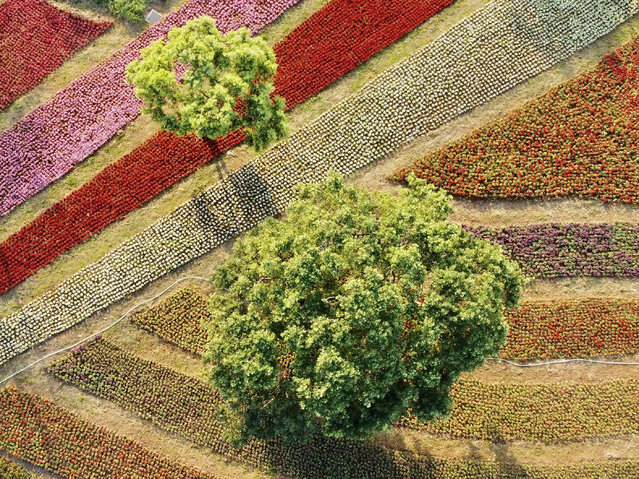 An aerial photograph shows trees among a flower garden in Beitou district in Taipei on February 6, 2020. (Photo by Sam Yeh/AFP Photo) 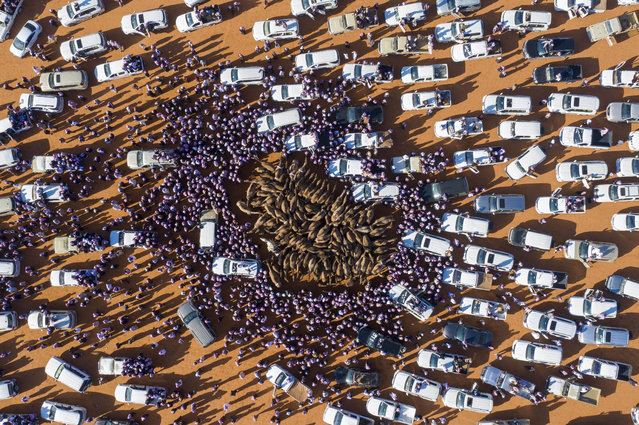 Cars and people surround camels for sale during the annual King Abdulaziz Camel Festival in Rumah, some 160 kilometres east of Riyadh, on January 7, 2020. (Photo by Faisal Al-Nasser/AFP Photo) 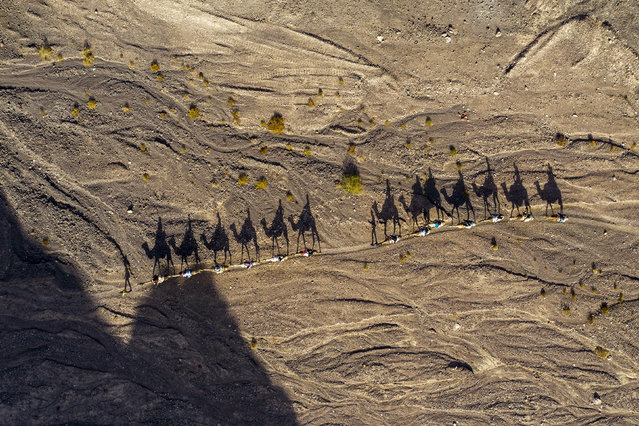 People ride on camels line during the Jewish holiday of Hanukkah, at a desert near the southern Israeli city of Eilat, Thursday, December 26, 2019. (Photo by Oded Balilty/AP Photo) 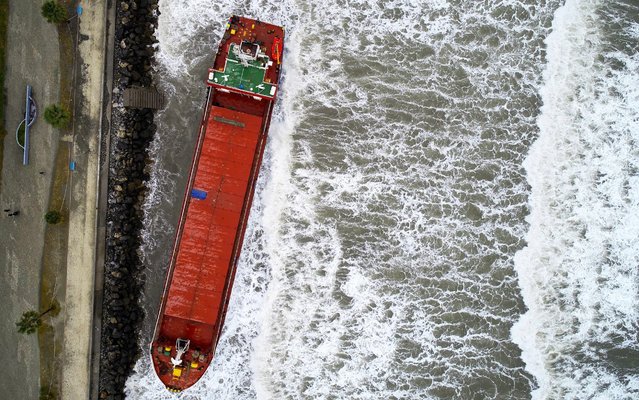 A drone photo shows a cargo ship, anchored offshore in Hatay's Dortyol district, after it grounded due to heavy storm in Hatay, Turkey on January 31, 2020. (Photo by Eren Bozkurt/Anadolu Agency via Getty Images) 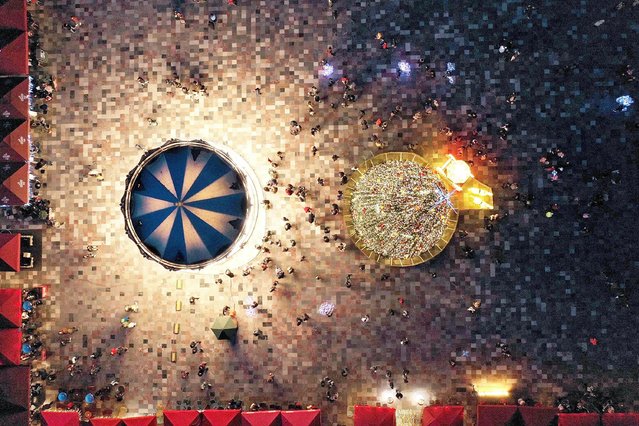 A picture taken on December 27, 2019, shows an aerial view of Skanderbeg Square in Tirana, lit with Christmas decorations and surrounded by an open Christmas market. (Photo by Gent Shkullaku/AFP Photo) 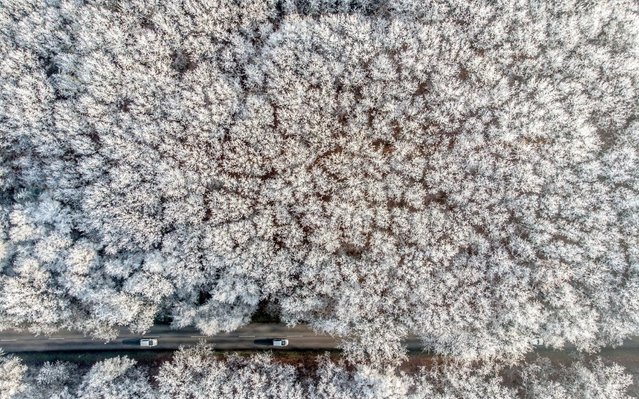 A picture taken with a drone shows vehicles moving on a road between hoar-frost covered trees near Debrecen, Hungary, 16 January 2020. (Photo by Zsolt Czegledi/EPA/EFE/Rex Features/Shutterstock) 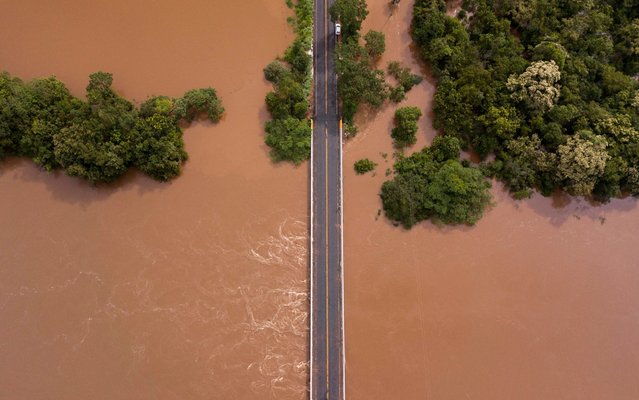 View of a bridge almost consumed by flood water on the border of the municipalities of Diamantina and Olhos D’Agua in Minas Gerais state, Brazil, on January 28, 2020. The levels of the Jequitinhonha River have risen to alarming levels following severe flooding in the state, which has already claimed close to 50 confirmed deaths and almost 19,000 people have been forced from their homes due to flood or landslide damage. (Photo by Nilmar Lage/AFP Photo) 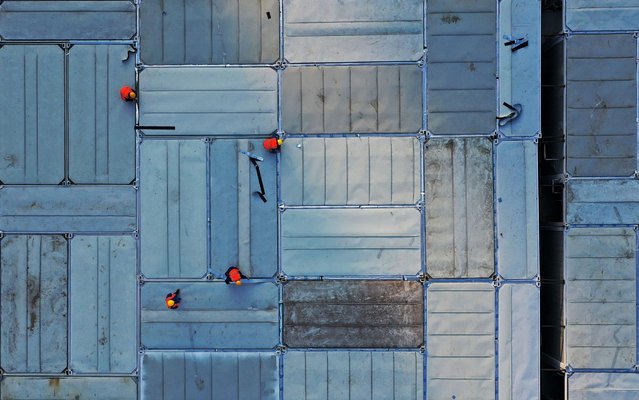 Aerial photo taken on February 5, 2020 shows the construction site of the Leishenshan (Thunder God Mountain) Hospital in Wuhan, central China's Hubei Province. Leishenshan Hospital, one of the makeshift hospitals to battle against the novel strain of coronavirus in Wuhan, has completed its main part of construction. (Photo by Li He/Xinhua News Agency) 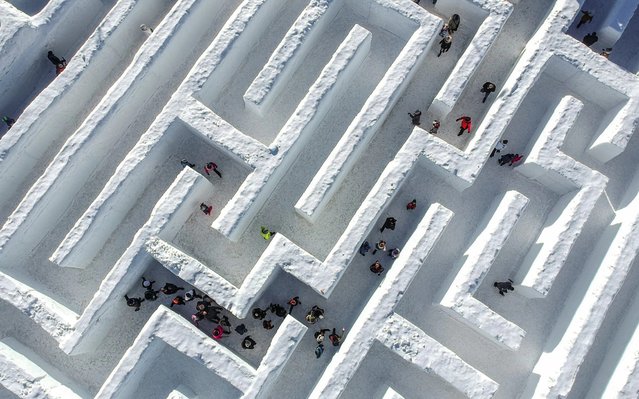 A drone view of visitors trying to find their way through the biggest snow maze of the world in in Zakopane, Poland on January 29, 2020. The snow maze idea was created for the first time in the winter season of 2015/2016. In 2020, it is a top attraction in the Snow capital of Poland, where visitors can enjoy more than 3000 square meters to find an exit. (Photo by Omar Marques/Anadolu Agency via Getty Images)
Edit Del
15 Feb 2020 00:03:00, post received 0 comments
Publication archive:
←   →
Popular tags:
All tags
Last searches: