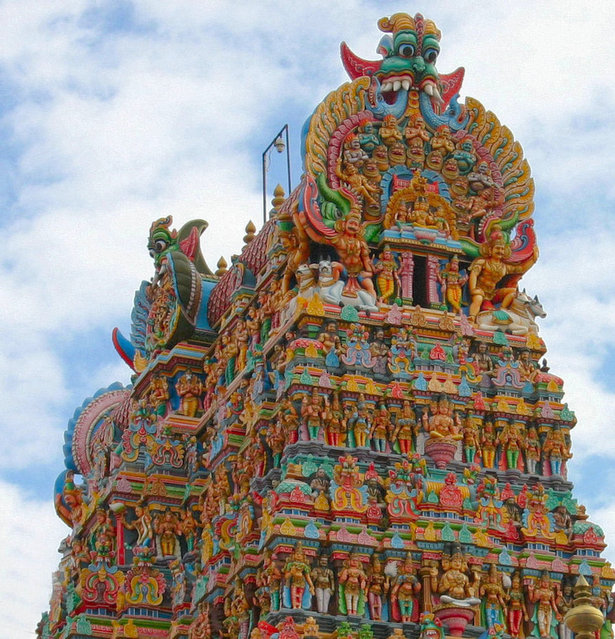 Meenakshi Amman Temple and Meenakshi Amman Kovil is a historic Hindu temple located on the southern bank of the Vaigai River in the temple city of Madurai, Tamil Nadu, India. It is dedicated to Parvati, known as Meenakshi, and her consort, Shiva, here named Sundareswarar.
Details
03 Jul 2015 10:02:00,post received 0 comments
Fact Gay Temple in Taiwan 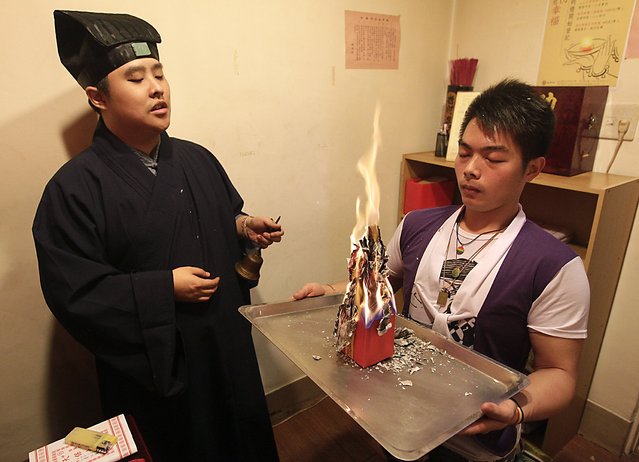 Lu Wei-ming (L), priest of the Wei-ming temple, and a worshipper burn a Taoist paper amulet during a prayer ritual at the temple in New Taipei city January 8, 2015. The shrine, down a narrow alleyway in a bustling district of the city, is dedicated to a deity who has watched over homosexuals for four centuries. Priest Lu founded the temple in 2006, at a time gays were excluded from most religious ceremonies. (Photo by Pichi Chuang/Reuters)
Details
21 Jan 2015 13:06:00,post received 0 comments
Wow Tiger And Man Best Friends 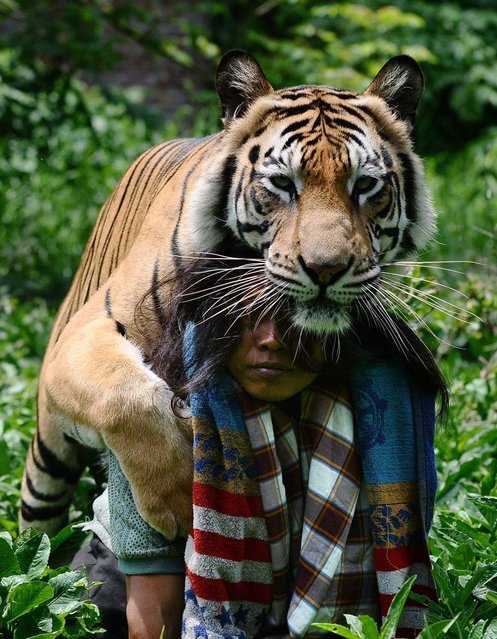 Mulan Jamilah, a 6-year-old Bengal tiger and Abdullah Sholeh, 33, play in the garden beside their home on January 20, 2014 in Malang, Indonesia. Abdullah Sholeh of Malang, Indonesia is an Islamic student who has become best friend and a full-time nanny to the tiger.
Details
30 Aug 2014 09:04:00,post received 0 comments
Sad The AIDS Temple in Thailand 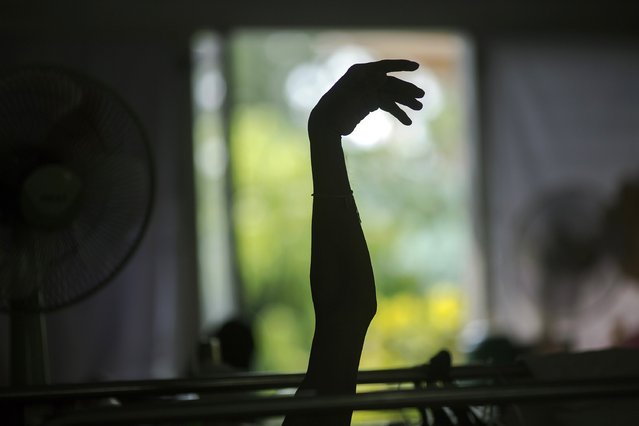 A terminally ill patient raises his arm in a hospice for those dying of AIDS at the Buddhist temple Wat Prabat Nampu in Lopburi province, north of Bangkok November 30, 2014. From 1992, the temple has provided housing for HIV positive patients and palliative care for those in the final stages of the AIDS disease. Data from 2013 estimates Thailand has 450,000 people living with HIV/AIDS, but only 353,000 have access to life-saving antiretroviral drugs. (Photo by Damir Sagolj/Reuters)
Details
08 Dec 2014 11:52:00,post received 0 comments
Fact Taiwan's Temple Factory 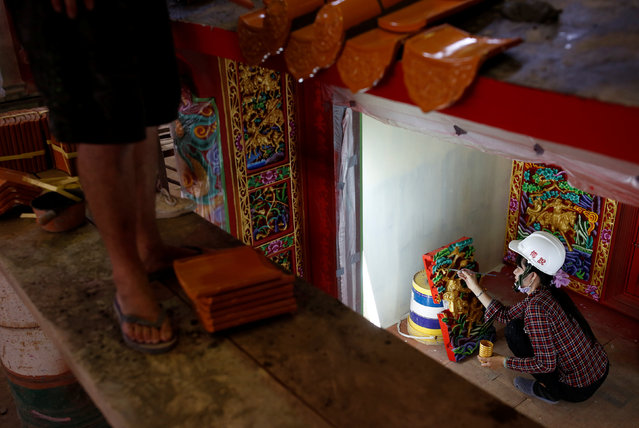 Some companies in Taiwan spend months building temples with bricks and cement, but Lin Fu-Chun's firm simply pours concrete into a giant mould and waits for it to dry. The 78-year-old Lin said his temple factory, Chuanso, needed just over six weeks to finish a building that normally took six months with conventional methods – and moulding was 40 percent cheaper. Here: An employee paints a ready-made Chinese traditional temple at the Chuanso factory that manufactures religious objects in Pingtung, Taiwan July 5, 2016. (Photo by Tyrone Siu/Reuters)
Details
29 Jul 2016 12:57:00,post received 0 comments
Wow Bear vs Tiger 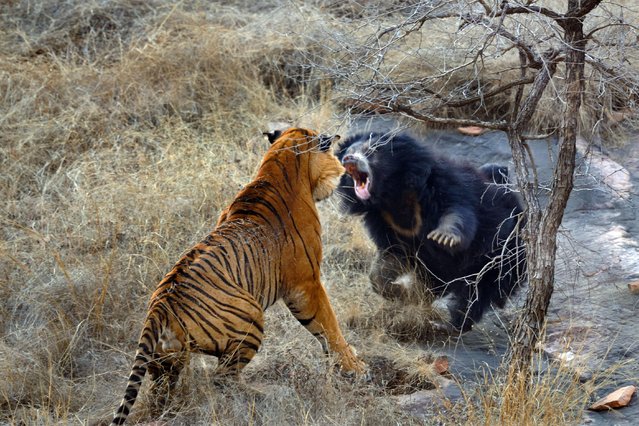 It's not often that two ferocious tigers have to beat a hasty retreat from a confrontation. But it seems that the wrath of a mother bear protecting two cubs on her back was more than enough to scare this pair off. Wildlife photographer Aditya Singh captured the encounter during a visit to Ranthambore Tiger Reserve in Rajasthan, India.
Details
24 Jan 2014 09:11:00,post received 0 comments
Wow Chimp Mothers Tiger Cubs 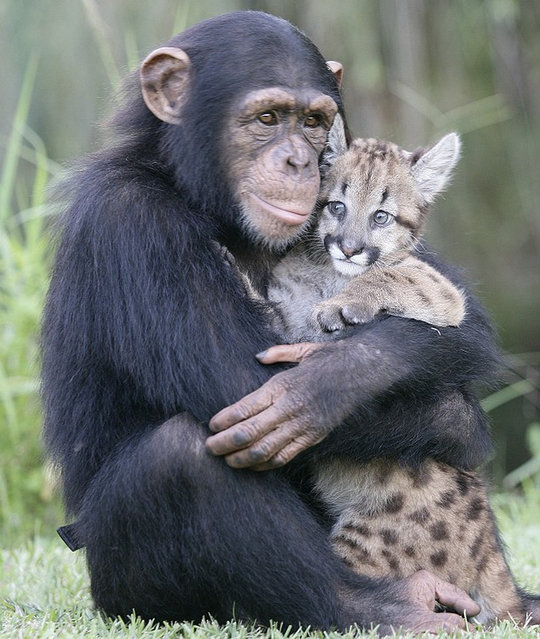 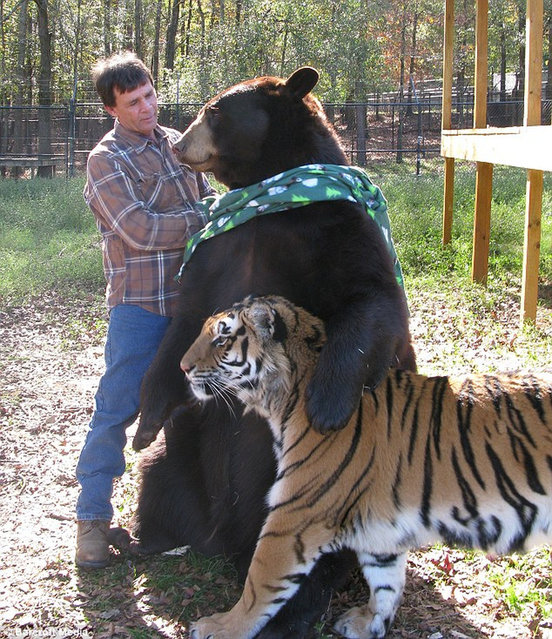 They make an unlikely trio, but Baloo the bear, Leo the lion and Shere Khan the tiger have forged an unusually strong bond.
Considering that they would be mortal enemies if they ever were to meet in the wild, it is stunning to see their unique and genuine friendship in these intimate pictures.
Rescued eight years ago during a police drugs raid in Atlanta, Georgia, the three friends were only cubs at the time at barely two months old.
Details
01 Dec 2012 12:45:00,post received 0 comments
Popular tags:
All tags
Last searches: