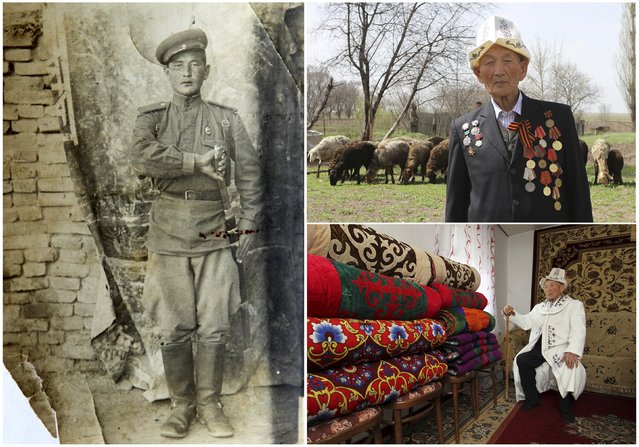 World War Two veteran Abla Begaliyev, 91, is seen in an undated handout picture (L), poses for a picture in Arashan (Top R) and at home in Kyrgyzstan April 14, 2015. Begaliyev served in the border guard cavalry from February 1942 until April 1947. Originally from Kyrgyzstan, he fought on the Ukrainian front and relocated to the border with Afghanistan at the end of World War Two. As the world marks the 70th anniversary of the end of World War Two, Reuters photographers the length and breadth of the former Soviet republics (CCCP) captured portraits of Red Army veterans, mostly now in their 80s and 90s, today and through archive pictures at the time. More than 20 million Soviet citizens were killed in the war. (Photo by Vladimir Pirogov/Reuters/Family handout (L))
Details
08 May 2015 14:22:00,post received 0 comments
Popular tags:
All tags
Last searches: