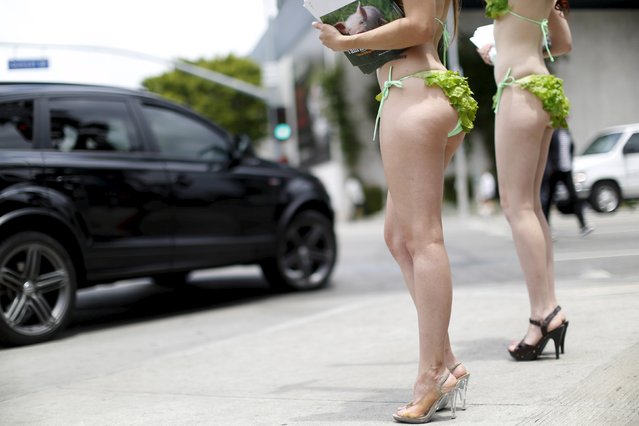 Activists from People for the Ethical Treatment of Animals (PETA) promoting a vegan diet are pictured as people drive past in Los Angeles, California May 21, 2015. (Photo by Mario Anzuoni/Reuters)
Details
22 May 2015 12:26:00,post received 0 comments
Fact Go Bananas in the Bedroom: Go Vegan! 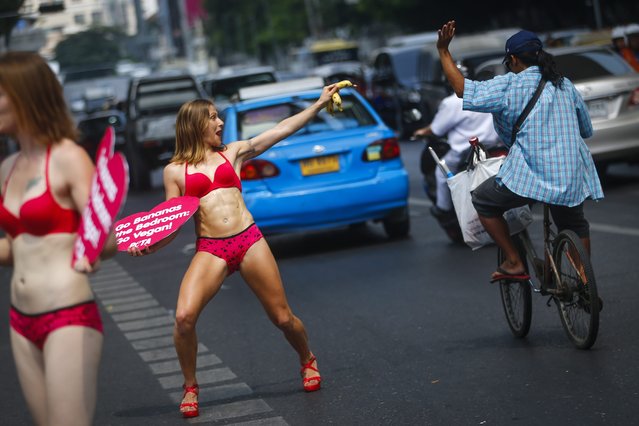 An animal rights activist from People for the Ethical Treatment of Animals (PETA) hands out bananas to motorists at an intersection in Bangkok, Thailand, 12 February 2015. Activists called on people turn to vegetarian saying the cholesterol in meat, eggs and daily products can contribute to hardening of arteries and slow the flow of blood to all the body's vital organs. (Photo by Diego Azubel/EPA)
Details
17 Feb 2015 11:57:00,post received 0 comments
Fact In the Land of Milk and Honey, Israelis Turn Vegan 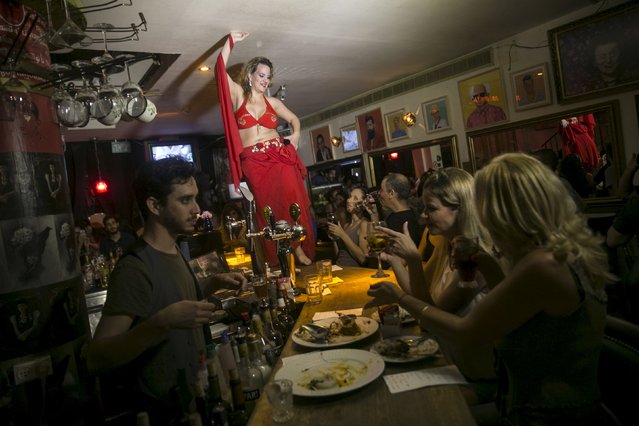 A belly dancer dances on the bar at Georgian restaurant Nanuchka in Tel Aviv, Israel July 15, 2015. Nana Shrier, owner of Nanuchka, shocked Israel's culinary world when she removed all animal-based products from the menu. Nanuchka is part of a growing trend that has transformed Israel's financial center into a haven for meatless cuisine. (Photo by Baz Ratner/Reuters)
Details
22 Jul 2015 11:40:00,post received 0 comments
Fact The Day in Photos – August 15, 2017 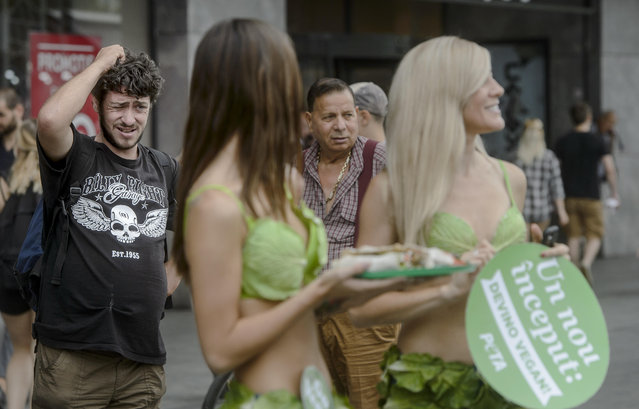 A man grimaces walking by the “Lettuce Ladies”, a group of PETA activists, during an event promoting a vegan lifestyle, downtown Bucharest, Romania, Monday, August 14, 2017. Two PETA vegan ambassadors distributed vegan food to passers by in the Romanian capital, the latest stop in a tour including the United States, Russia and Turkey aimed at promoting a vegan lifestyle. The sign reads in Romanian “start fresh: become vegan”. (Photo by Andreea Alexandru/AP Photo)
Details
15 Aug 2017 07:52:00,post received 0 comments
Fact The Day in Photos – April 22, 2016 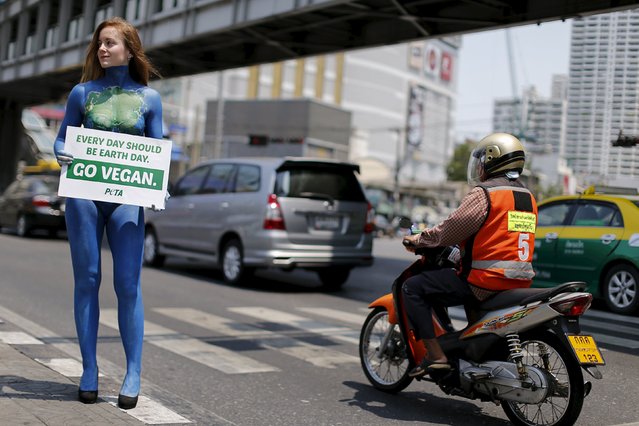 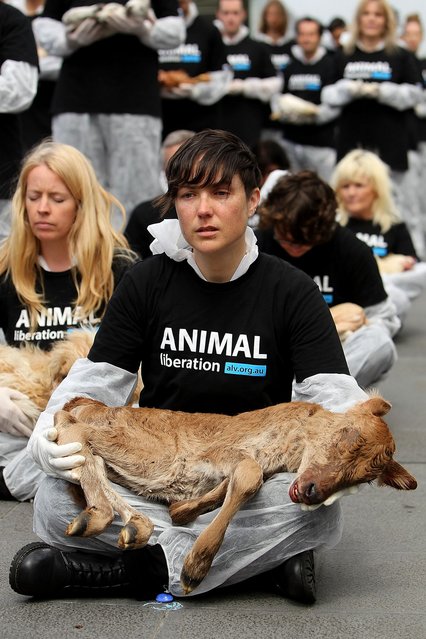 An Animal Liberation Victoria activist cries as she holds a dead animal at Federation Square on October 1, 2013 in Melbourne, Australia. Over 200 activists gathered with the bodies of deceased animals to publicly grieve their deaths. Animal Liberation Victoria is against the treatment of animals as “property” an promotes a vegan lifestyle. (Photo by Graham Denholm)
Details
01 Oct 2013 08:38:00,post received 0 comments
Touching Black Hebrews Celebrate The Shavuot Harvest Festival 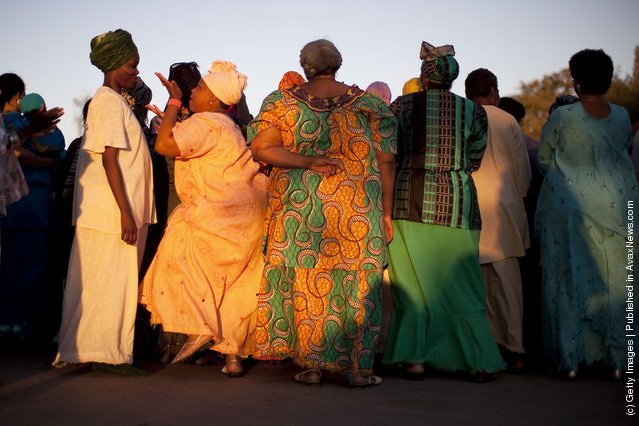 Members of the Black Hebrews community celebrate the Shavuot harvest festival on June, 19, 2011 in Dimona, Israel. The community, who call themselves the African Hebrew Israelites of Jerusalem, moved to Israel in 1969 from the United States and have since maintained a vibrant culture which includes a communal lifestyle and a vegan diet. They are not recognized as Jews by Israel despite their belief in the Torah, but were granted permanent resident status in 2003. (Photo by Uriel Sinai/Getty Images)
Details
20 Jun 2011 10:44:00,post received 0 comments
Charming Ephemeral Lighting Installation by (Fos) 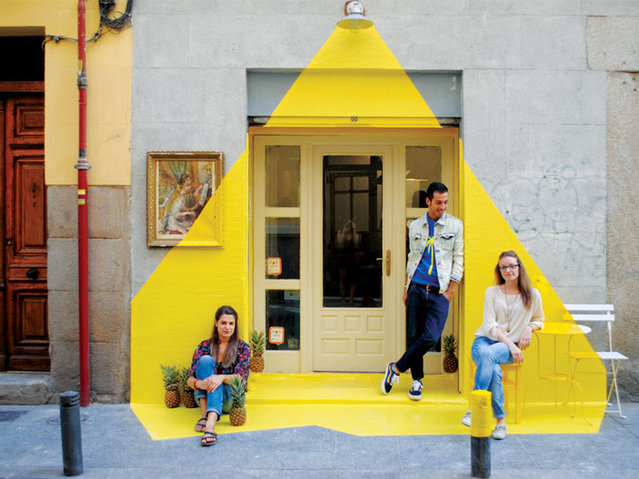 (fos) is the name of the first ephemeral installation by the multidisciplinary team (fos). It means light in Greek and melted in Catalan. In this project has been represented by a skin that covers both vertical and horizontal surfaces. The protected façade of the vegan restaurant Rayen at Lope de Vega street in Madrid has been illuminated for 4 days and nights by more than 250lm of yellow duct tape, painted décor items, pineapples and... a lamp. A visual game between perspective and colored volumes that gained the looks.
Details
10 Apr 2014 12:16:00,post received 0 comments
Popular tags:
All tags
Last searches: