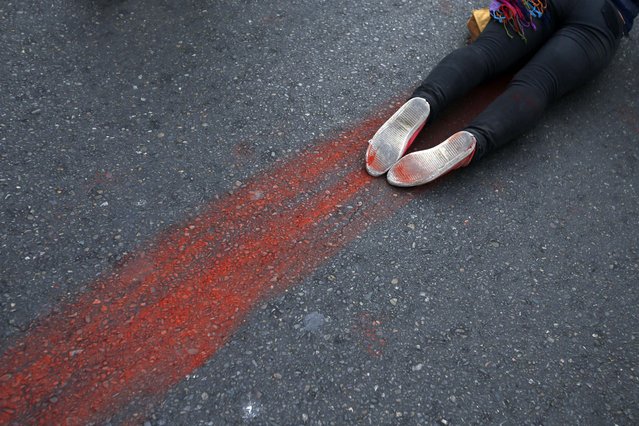 A protester performs the symbolic death of a student demonstrator during a march near Congress where Chile's President Michelle Bachelet gives her annual address in Valparaiso, Chile, Thursday, May 21, 2015. Demonstrators are protesting the death of two students killed during an education reform march last week in Valparaiso and demanding more involvement in education reform. (Photo by Luis Hidalgo/AP Photo)
Details
22 May 2015 12:36:00,post received 0 comments
Fact Chile Earthquake 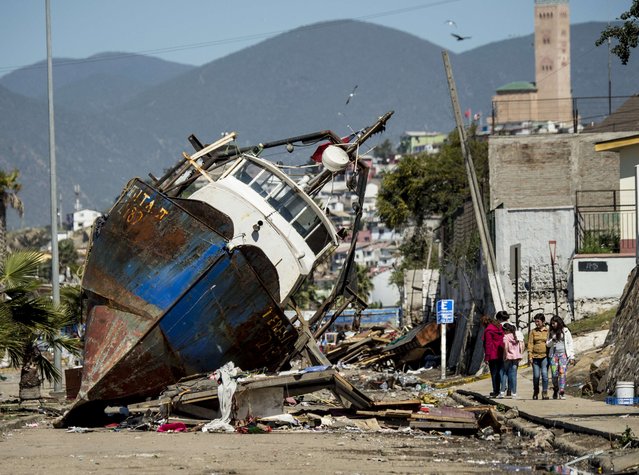 A fishing boat that was ran aground by the sea while moored in the port of Coquimbo, some 445 km north of Santiago, during the eve's earthquake on September 17, 2015. A million people were evacuated in Chile after an 8.3-magnitude quake struck offshore in the Pacific, killing at least 10 people and triggering tsunami waves along its northern coast. (Photo by Martin Bernetti/AFP Photo)
Details
18 Sep 2015 14:36:00,post received 0 comments
Fact Halloween in Chile 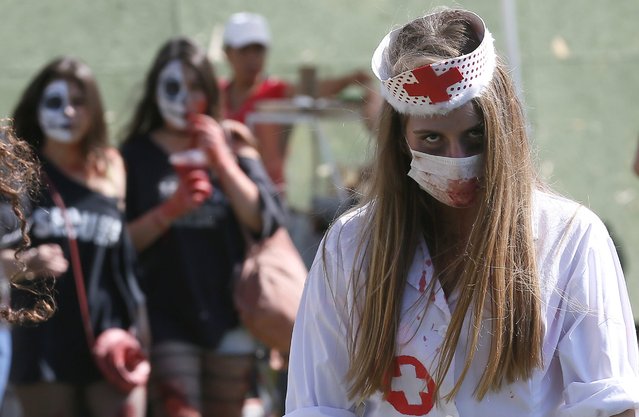 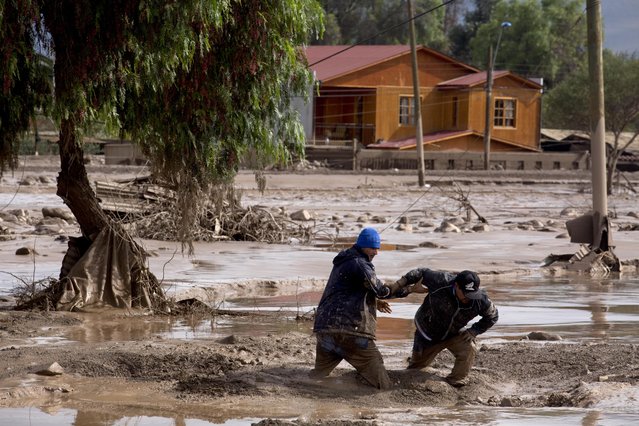 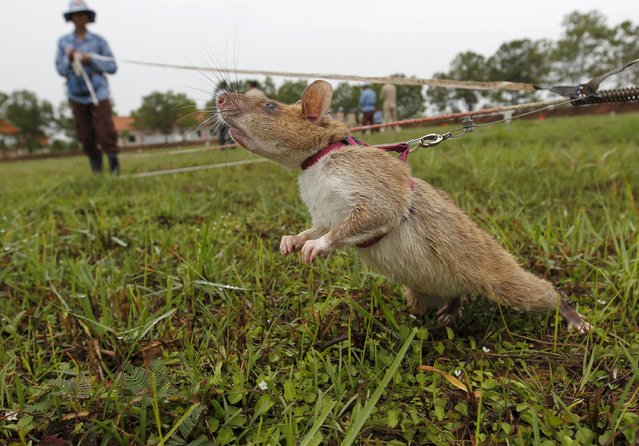 A rat being trained by the Cambodian Mine Action Centre (CMAC) is pictured on an inactive landmine field in Siem Reap province July 9, 2015. Gambian pouched rats were deployed to Cambodia from Tanzania in April by a Belgian non-profit organization, APOPO, to help clear mines. They've been trained since they were 4 weeks old. Cambodia is still littered with landmines after emerging from decades of civil war, including the 1970s Khmer Rough “Killing Fields” genocide, leaving it with one of the world's highest disability rates. APOPO has used the rodents for mine-clearing projects in several countries, including Angola, Mozambique, Thailand, Laos, and Vietnam. (Photo by Samrang Pring/Reuters)
Details
14 Jul 2015 13:35:00,post received 0 comments
Fact Illegal Jade Mining in Myanmar 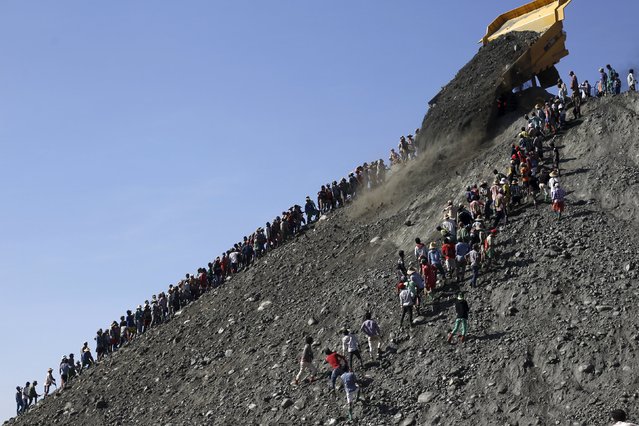 Miners search for jade stones at a mine dump at a Hpakant jade mine in Kachin state, Myanmar November 25, 2015. Using heavy earth-excavators and explosives, miners have been tearing into Myanmar's northern hills in recent months, in a rush to excavate more jade from the world's richest deposits of the gemstone before a new government takes office next year. (Photo by Soe Zeya Tun/Reuters)
Details
18 Dec 2015 08:03:00,post received 0 comments
Fact Student Protests in Chile 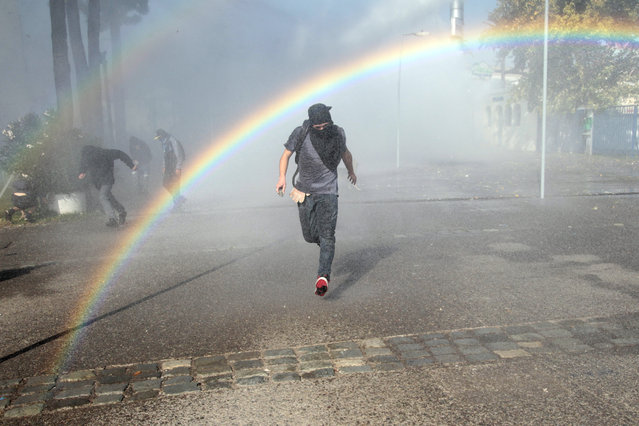 A protester runs from a jet of water shot from a police water cannon in the courtyard of the University of Santiago, during clashes between students and police, in Santiago, Chile, Thursday, May 14, 2015. In the capital and other cities across the country, high school and university students marched, for the second time this year, to demand education reform. (Photo by Luis Hidalgo/AP Photo)
Details
15 May 2015 10:49:00,post received 0 comments
Fact The Biggest Coal Mine in Russia 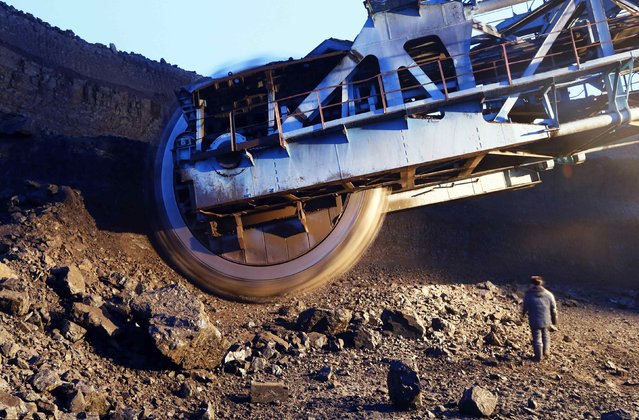 An employee walks near a rotary dredge which works on the coal face of the Borodinsky opencast colliery, near the Siberian town of Borodino, east of Krasnoyarsk, December 9, 2014. The Borodinsky colliery, 9 km (5.6 miles) long and more than 100 meters (328 feet) deep, annually produces more than 20 million tons of coal and is considered to be the biggest opencast coal mine in Russia, according to official representatives. (Photo by Ilya Naymushin/Reuters)
Details
11 Dec 2014 13:29:00,post received 0 comments
Popular tags:
All tags
Last searches: