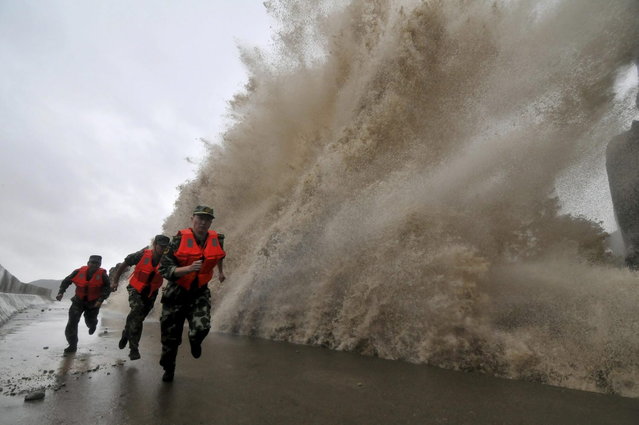 Frontier soldiers run as a storm surge hits the coastline under the influence of Typhoon Fitow in Wenling, Zhejiang province, October 6, 2013. China issued a red alert ahead of Typhoon Fitow, which is expected to lash east of the country on Sunday evening. (Photo by Reuters/China Daily)
Details
08 Oct 2013 10:01:00,post received 0 comments
Fact Typhoons this Week 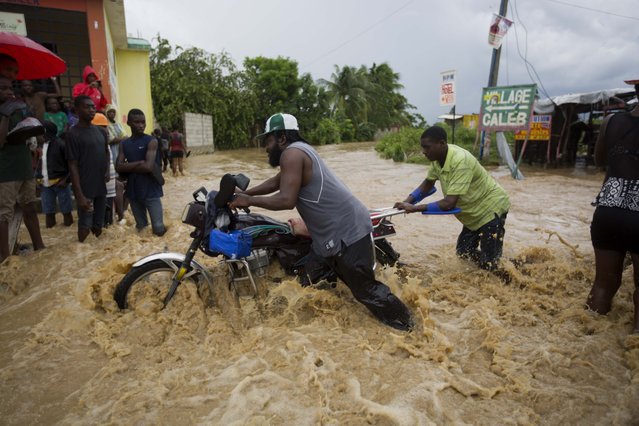 Men push a motorbike through a street flooded by a river that overflowed from heavy rains caused by Hurricane Matthew in Leogane, Haiti, Wednesday, October 5, 2016. Rescue workers in Haiti struggled to reach cutoff towns and learn the full extent of the death and destruction caused by Hurricane Matthew as the storm began battering the Bahamas on Wednesday and triggered large-scale evacuations along the U.S. East Coast. (Photo by Dieu Nalio Chery/AP Photo)
Details
06 Oct 2016 09:46:00,post received 0 comments
Fact Typhoon in Philippines 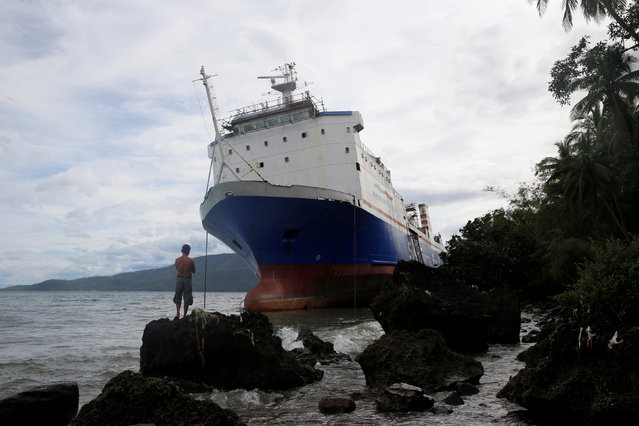 A passenger inter-island ferry Shuttle RoRo 5 is pictured after it was swept ashore at the height of Typhoon Nock-Ten in Mabini, Batangas in the Philippines December 26, 2016. (Photo by Erik De Castro/Reuters)
Details
27 Dec 2016 07:35:00,post received 0 comments
Fact Typhoon Soudelor 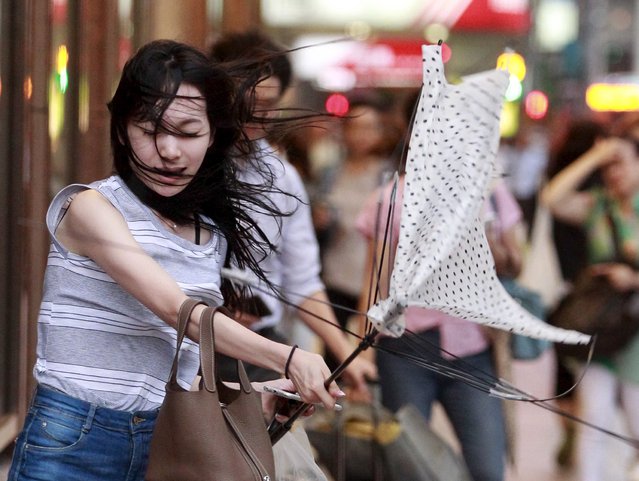 A woman holds her umbrella while walking against strong winds as Typhoon Soudelor approaches Taiwan in Taipei, August 7, 2015. Taiwan evacuated hundreds of people from their homes on Friday as the strongest typhoon to threaten the island in two years churned towards it and was expected to make landfall early on Saturday. (Photo by Pichi Chuang/Reuters)
Details
08 Aug 2015 13:06:00,post received 0 comments
Sad Typhoon Rammasun 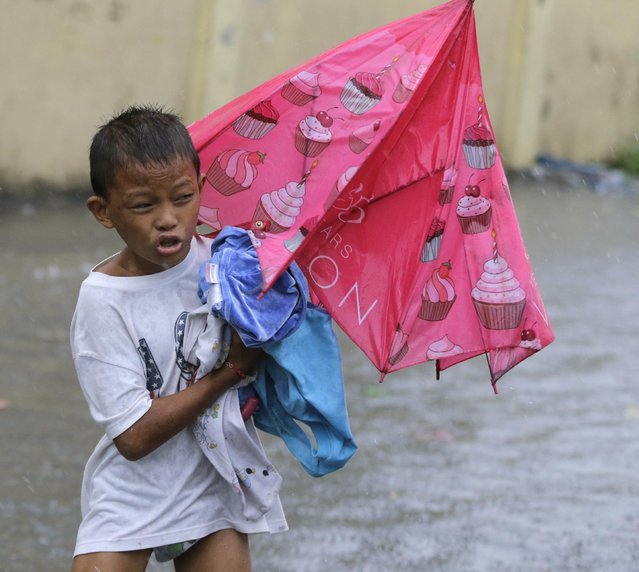 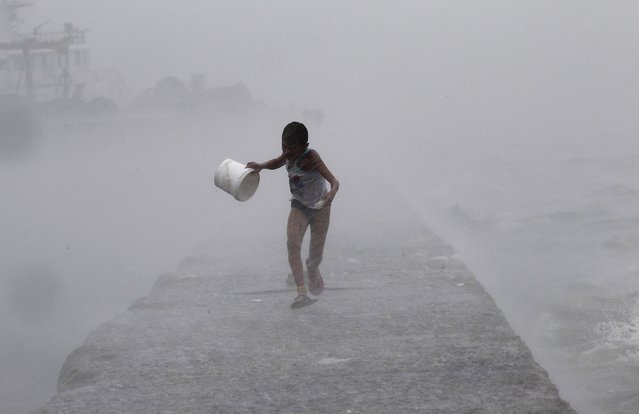 A boy runs as heavy rains and high waves brought by typhoon Linfa, locally named Egay, crash along a breakwater along Manila Bay at a slum area in Baseco, Tondo in Manila July 6, 2015. All shipping was ordered to remain in harbor and some flights were canceled in the northern Philippines, while schools were closed in the capital, Manila, on Monday due to flooding and landslides from a tropical storm, disaster officials said. Storm warnings were issued in at least 14 areas of the main Philippine island of Luzon as tropical storm Linfa moved slowly across the north of the Southeast Asian archipelago. It was carrying maximum wind gusts of 100 km per hour (60 mph). (Photo by Romeo Ranoco/Reuters)
Details
07 Jul 2015 12:25:00,post received 0 comments
Fact Typhoon in Philippines 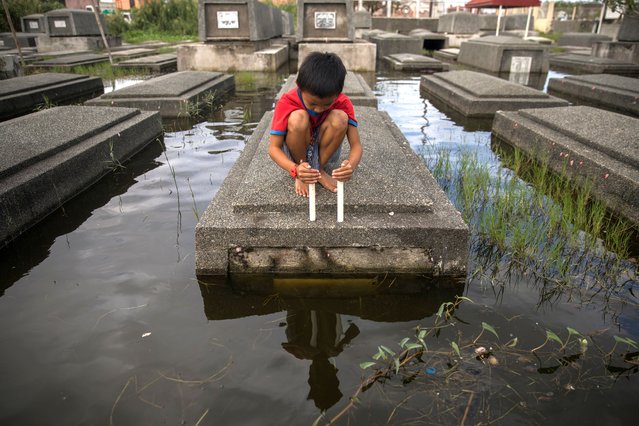 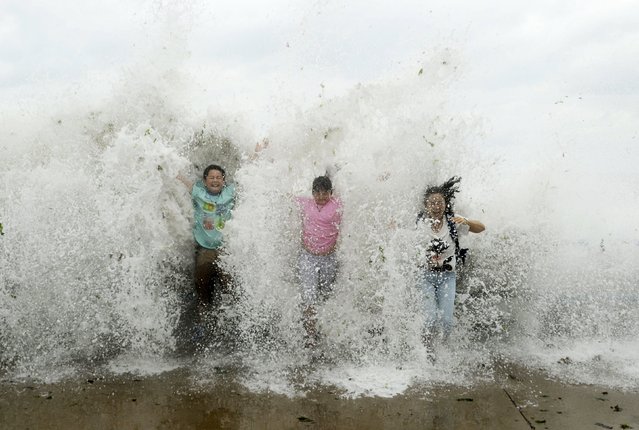 Tourists standing near the sea shore are hit by a wave, which surged past a barrier under the influence of Typhoon Chan-hom, in Qingdao, Shandong province, China, July 12, 2015. One of the most powerful typhoons to strike eastern China in decades disrupted air, rail and sea transport on Saturday after forcing the evacuation of more than a million people from the provinces of Zhejiang and Jiangsu, state media reported. (Photo by Reuters/Stringer)
Details
13 Jul 2015 10:47:00,post received 0 comments
Popular tags:
All tags
Last searches: