Charming People in the Landscape 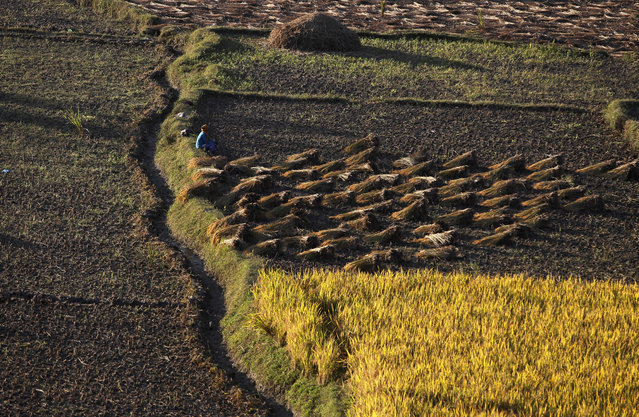 A Nepalese farmer takes rest while harvesting paddy in Chunnikhel, on the outskirts of Kathmandu, Nepal, Thursday, October 20, 2016. Agriculture is the main source of food, income, and employment for the majority of people in Nepal. (Photo by Niranjan Shrestha/AP Photo) 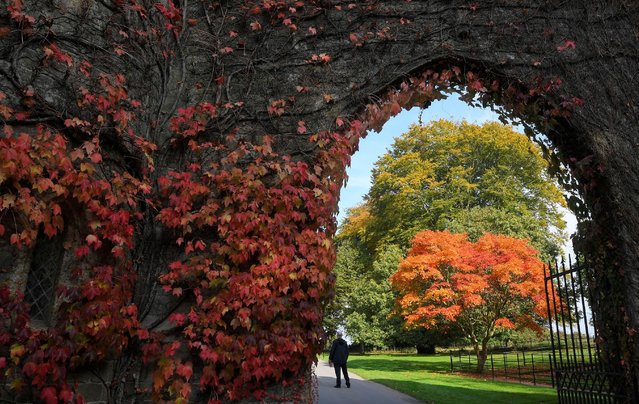 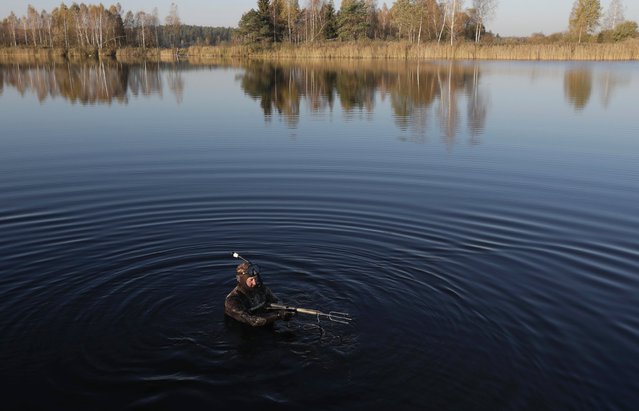 A local diver checks his equipment before diving underwater to hunt on the lake near the village of Tonovo, west of the capital Minsk, Belarus, October 18, 2016. (Photo by Sergei Grits/AP Photo) 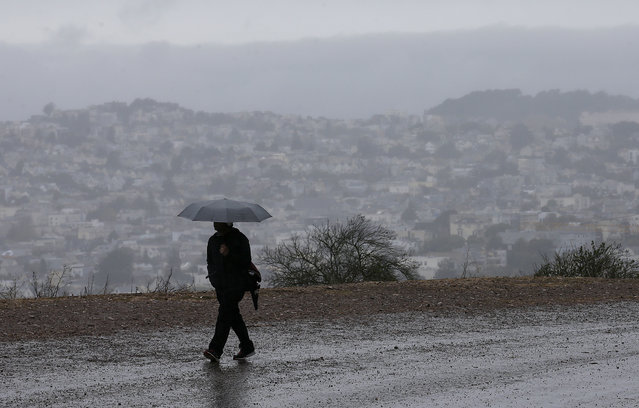 A man carries an umbrella while walking along a road on Bernal Heights Hill in San Francisco, Friday, October 14, 2016. (Photo by Jeff Chiu/AP Photo) 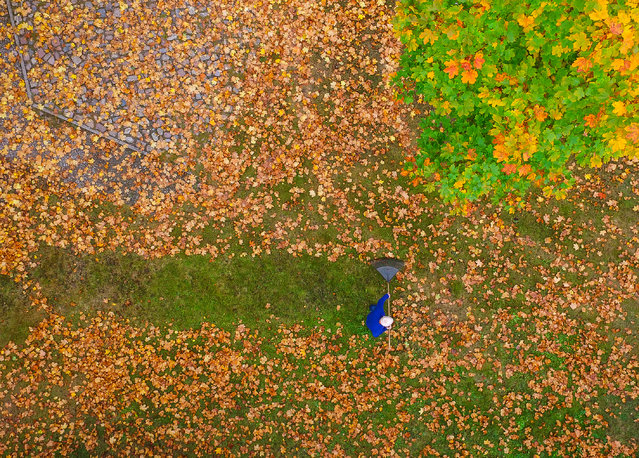 A drone picture shows a man who racks colorful autumn leaves on a meadow under a maple tree in Brandenburg, eastern Germany, on October 10, 2016. (Photo by Patrick Pleul/AFP Photo/DPA) 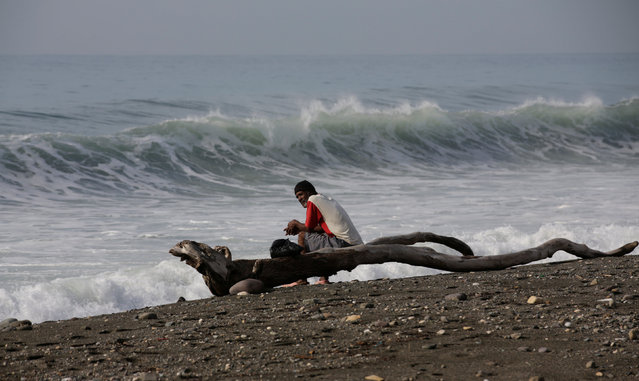 A man looks out at the sea as hurricane Matthew approaches in Kingston, Jamaica October 2, 2016. (Photo by Henry Romero/Reuters) 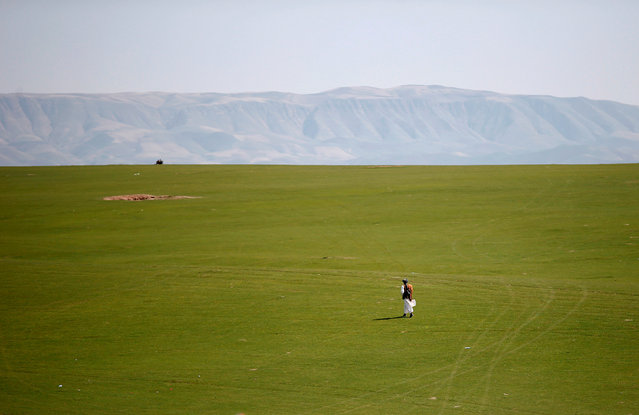 A man walks in a desert during an election campaign in Kunduz province, northern Afghanistan March 19, 2014. (Photo by Ahmad Masood/Reuters) 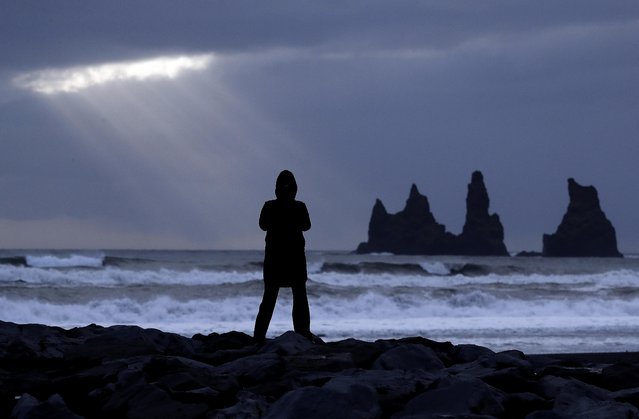 A woman stands on the black beach in Vik, Iceland, near the Volcano Katla, Friday, October 28, 2016. (Photo by Frank Augstein/AP Photo) 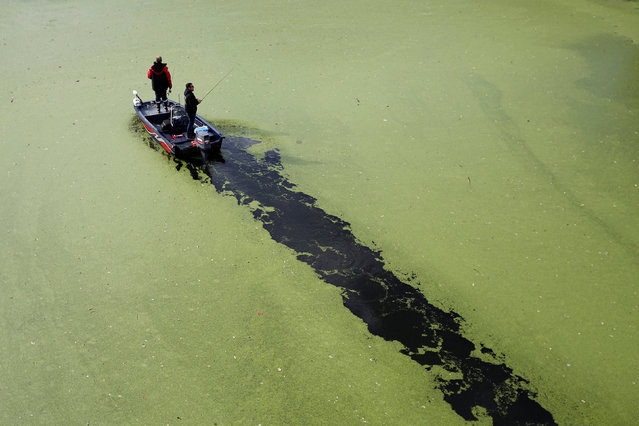 Fishermen stand on a boat on the Sevre Nantaise River that is covered by duckweed in Vertou, France, October 4, 2016. (Photo by Stephane Mahe/Reuters) 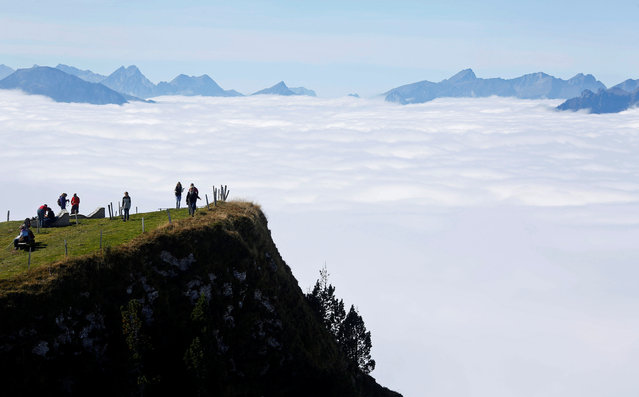 Tourists walk in the sun on the Niederhorn mountain near Interlaken, Switzerland October 5, 2016. (Photo by Ruben Sprich/Reuters) 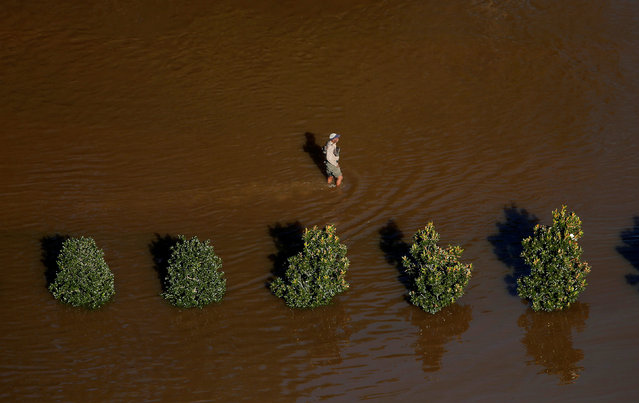 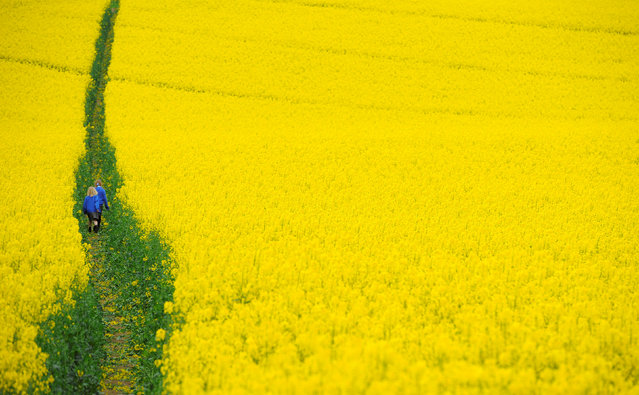 Children walk through a field of rapeseed near Boroughbridge, Britain, May 11, 2010. (Photo by Nigel Roddis/Reuters) 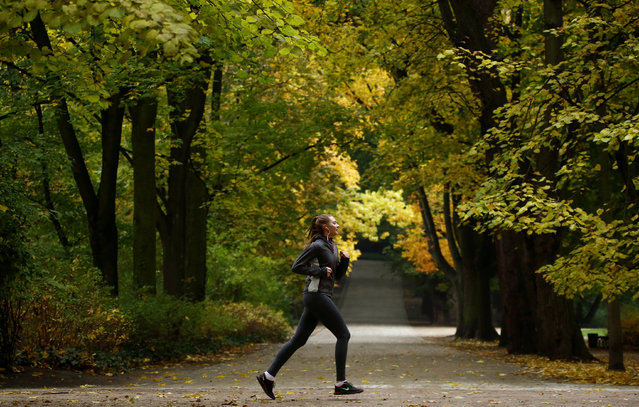 A woman runs during an autumn day at the Royal Lazienki Park in Warsaw, Poland October 20, 2016. (Photo by Kacper Pempel/Reuters) 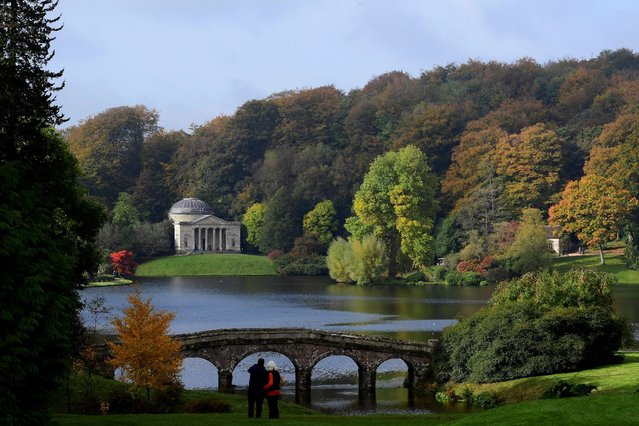 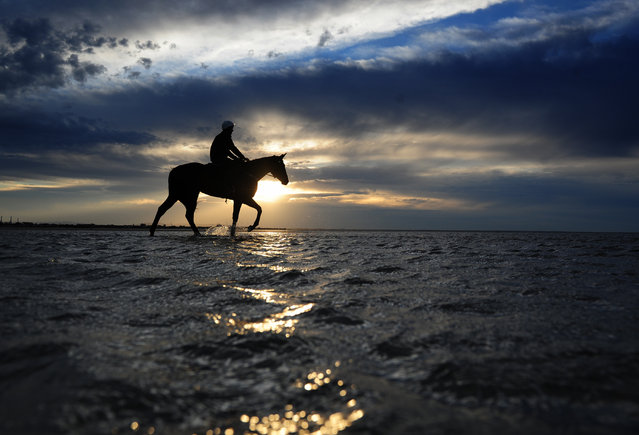 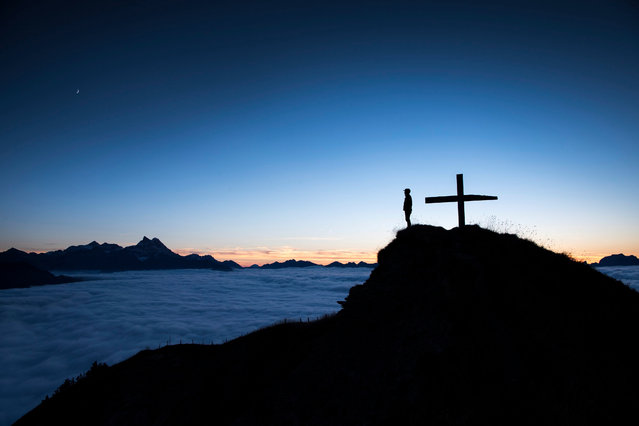 An image made available 06 October shows a person watching the sunset above the sea of fog on the summit of the Croix des Chaux/Chaux Ronde (2012m) above Gryon VD, western Switzerland, 05 October 2016. (Photo by Anthony Anex/EPA) 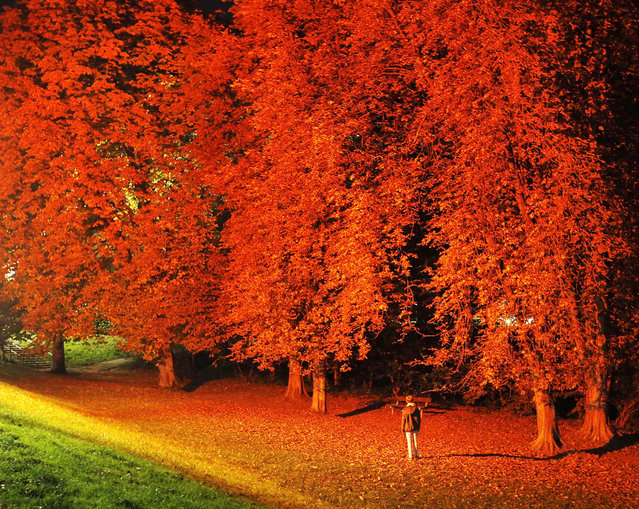 Trees in a park are illuminated with a red light as a part of an art project in Timmendorfer Strand, northern Germany Wednesday, October 26, 2016. (Photo by Michael Probst/AP Photo) 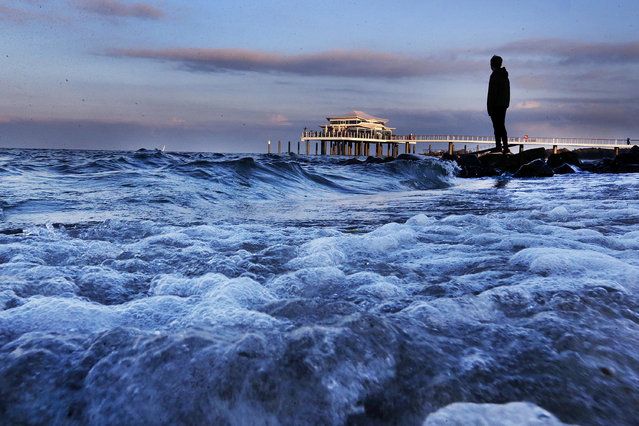 A man stands at the shore of the Baltic Sea in Timmendorfer Strand, northern Germany, Tuesday, October 25, 2016. In background the sea bridge with the new tea house. (Photo by Michael Probst/AP Photo) 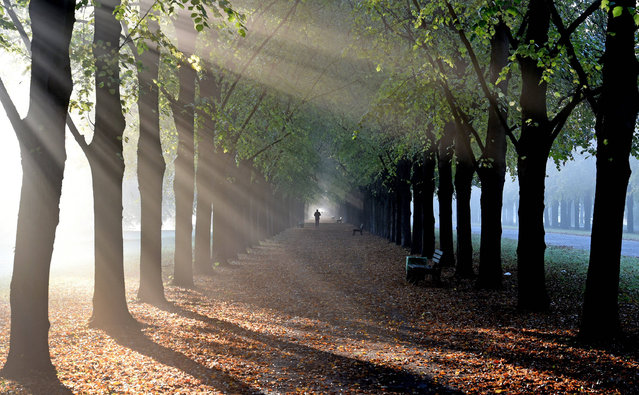 The morning sun breaks through the trees of the Georgengarten park to illuminate the early morning mist in Hanover, Germany, 18 October 2016. (Photo by Holger Hollemann/DPA) 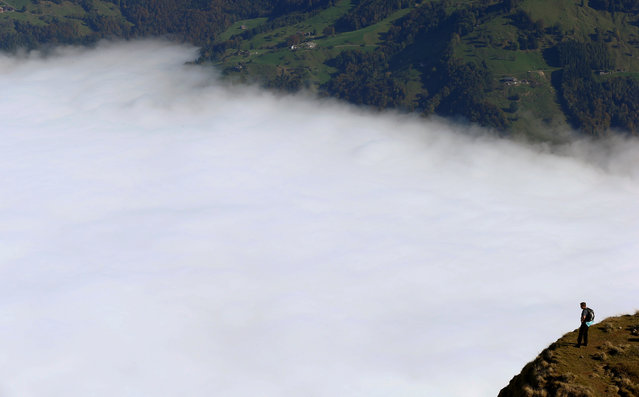 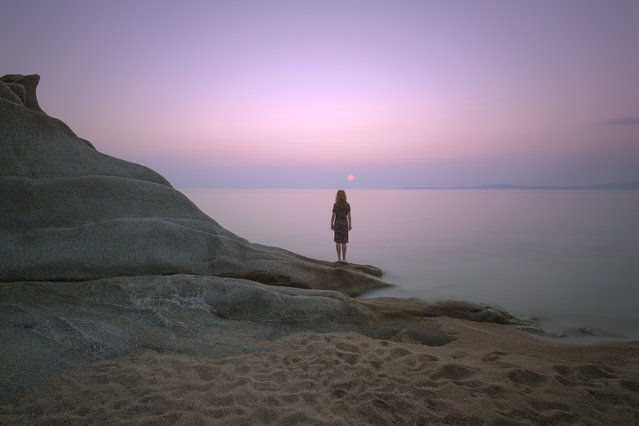