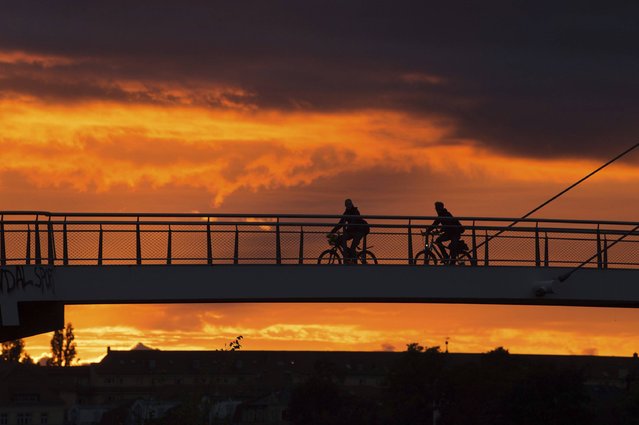 In this September 1, 2017 photo cyclists cross the Molen bridge in the light of the setting sun in Dresden, Germany. (Photo by Sebastian Kahnert/DPA via AP Photo) 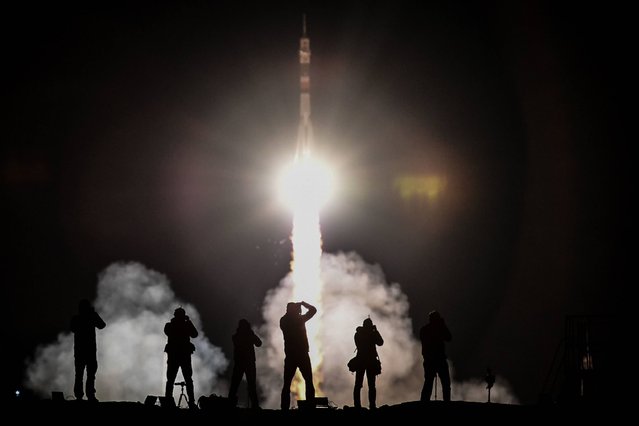 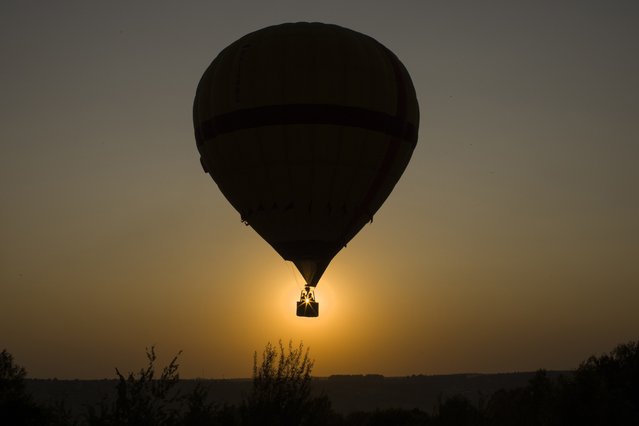 A couple enjoys a a hot-air balloon flight over the Peremilovo village, 65 km (40 miles) north of Moscow, during the sunset Sunday, August 20, 2017. The temperature jumped to 32 degrees Celsius, 89,6 Fahrenheit today. (Photo by Alexander Zemlianichenko/AP Photo) 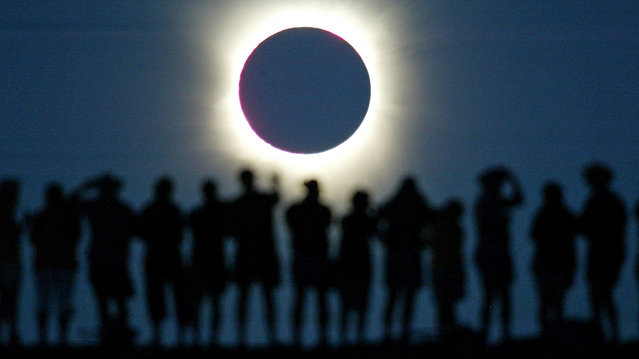 Tourists watch the sun being blocked by the moon during a solar eclipse in the Australian outback town of Lyndhurst, located around 700 kilometres (437 miles) north of Adelaide December 4, 2002. (Photo by David Gray/Reuters) 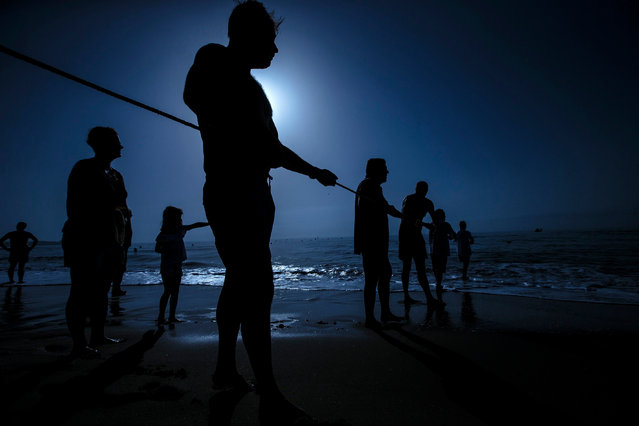 Fishermen attend the traditional fishing art “tirada del copo”, nowadays banned, during an event held to evoke the ancient trade of fishing in Los Boliches beach in Fuegirola, Spain, 15 August 2017. This kind of fishing was banned back in the 60s due to secure the fishing resource. (Photo by Jorge Zapata/EPA) 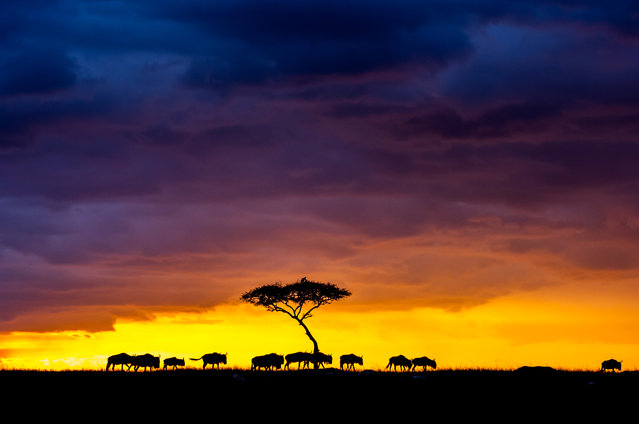 A herd of wildebeest cross the skyline against the fading light in Masai Mara, Kenya, 25 August 2017. Stunning sunset photos silhouette Africa’s wildlife against streaks of orange and red sky. In August, German photographer Ingo Gerlach was on safari in the Masai Mara when he convinced his safari guide to stop and take in the sunset. The wildlife photographer was rewarded with his patience by an eye-catching sunset, which cast Africa’s wildlife into dark shadows against the vibrant skies. (Photo by Ingo Gerlach/Barcroft Images) 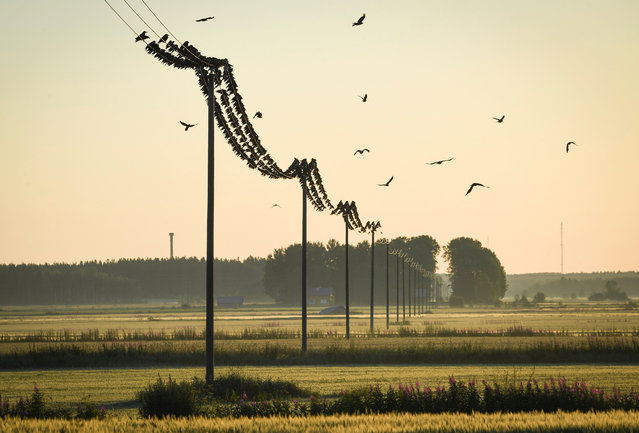 Birds sit on power lines above the fields in Kauhava, Finland, 30 July 2017. (Photo by Kimmo Brandt/EPA) 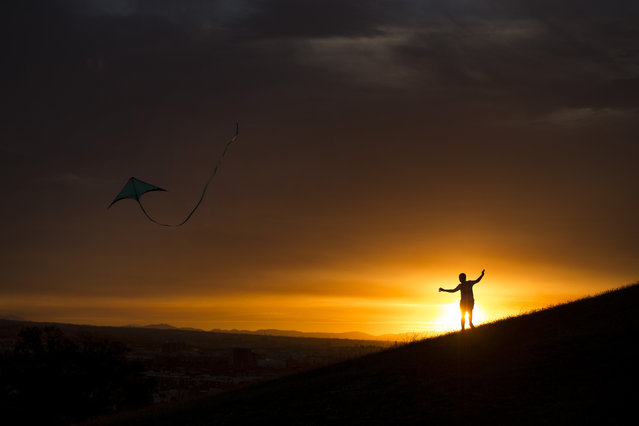 A youngster flies a kite at the sun sets at the Tio Pio park in Madrid, Monday, August 7, 2017. (Photo by Francisco Seco/AP Photo) 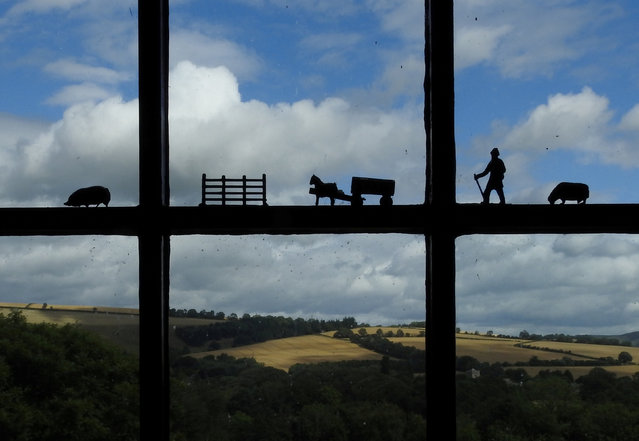 Miniature agricultural figures are seen on a window of a cottage overlooking farmland in Shropshire, central England, Britain July 27, 2017. (Photo by Toby Melville/Reuters) 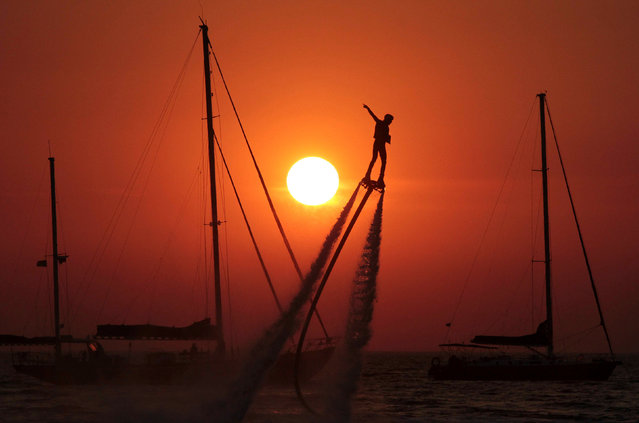 A man practices flyboarding near the village of Olenevka, Crimea August 5, 2017. (Photo by Pavel Rebrov/Reuters) 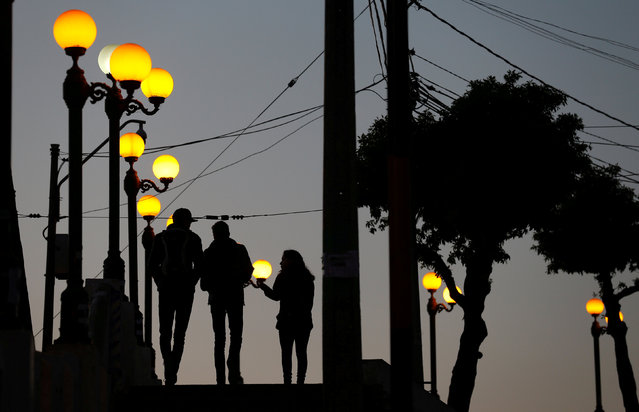 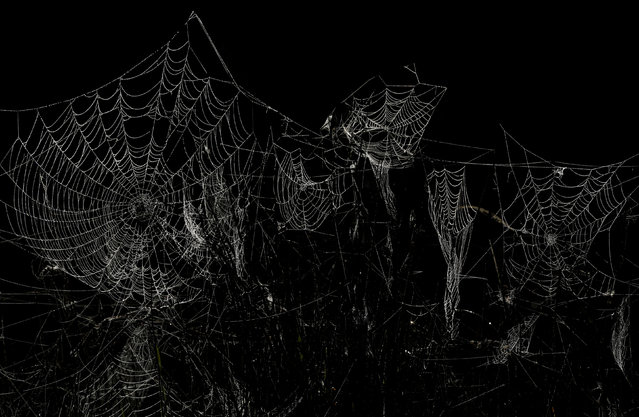 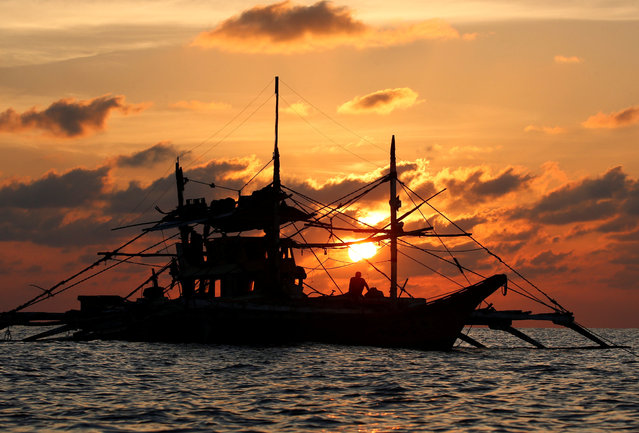 A Philippine boat fishes during sunset at the disputed Scarborough Shoal on April 5, 2017. (Photo by Erik De Castro/Reuters) 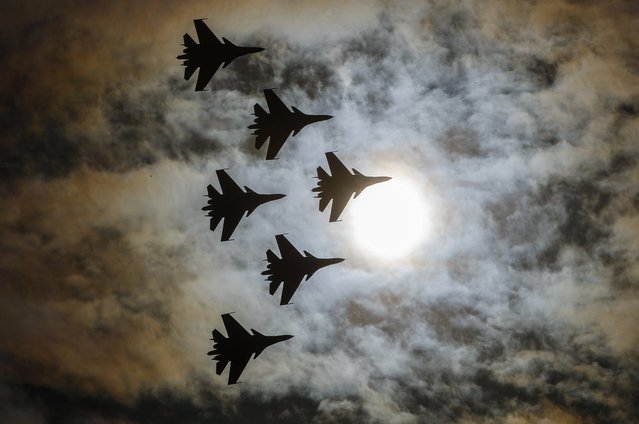 “The Russian Knights” an aerobatic demonstration team of the Russian Air Force, flying the Sukhoi Su-30SM fighter aircraft, perform during the Moscow International Aviation and Space Salon MAKS-2017 in the city of Zhukovsky, outside Moscow, 22 July 2017. The International Aviation and Space Salon MAKS 2017 take place from 18 to 23 July. (Photo by Sergei Ilnitsky/EPA) 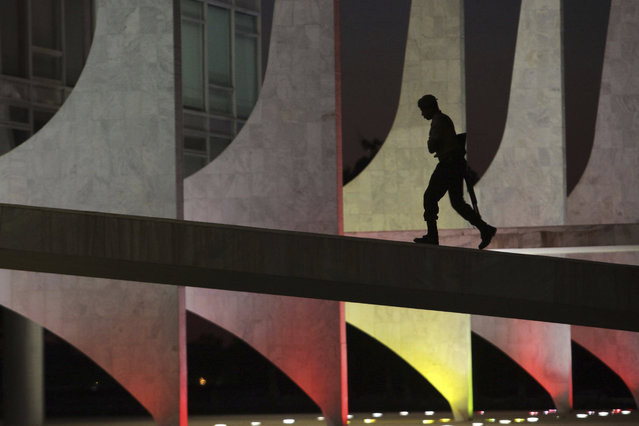 A soldier walks up the ramp of the Planalto Presidential Palace, illuminated with the colors of Spain, in honor of the victims of the Barcelona attack, at dawn in Brasilia, Brazil, Friday, August 18, 2017. Spanish police shot and killed five people carrying bomb belts who were connected to the Barcelona van attack that killed at least 13, as the manhunt intensified for the perpetrators of Europe's latest rampage claimed by the Islamic State group. (Photo by Eraldo Peres/AP Photo) 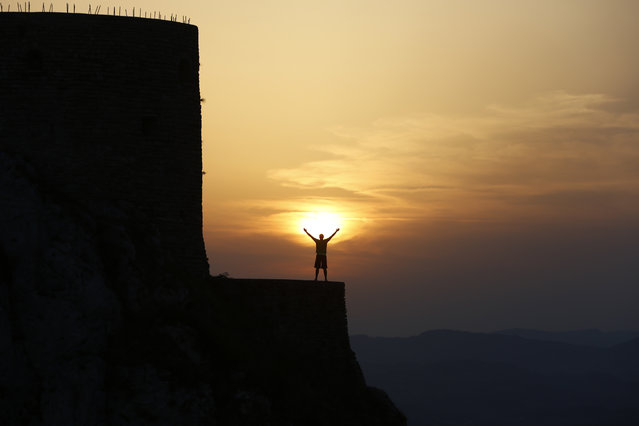 A Bosnian man poses for photo as he stands over a medieval forest near the Bosnian town of Srebrenik, 80 kms north of Sarajevo, on Wednesday, August 2 2017. A heatwave with temperatures of up to 40 Celsius degrees is affecting Bosnia, causing forest fires and discomfort. (Photo by Amel Emric/AP Photo) 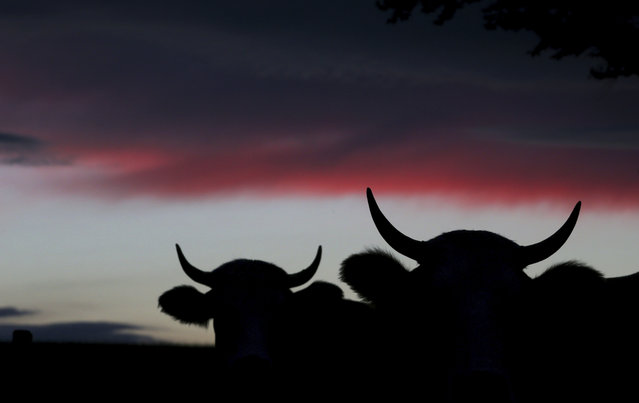 In this August 6, 2017 photo, cows graze on a pasture near the Bavarian town of Bernbeuren, southern Germany, during sunset. (Photo by Karl-Josef Hildenbrand/DPA via AP) 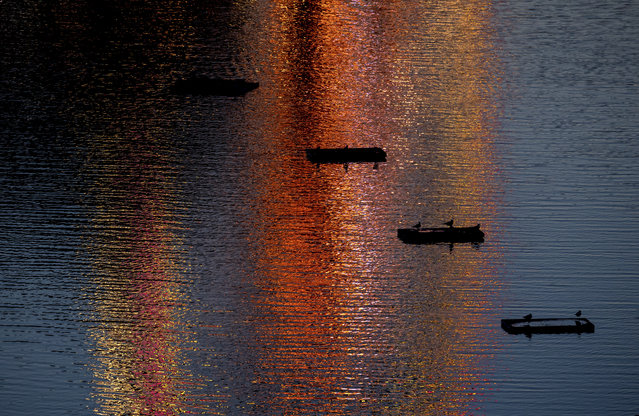 In this August 7, 2017 photo the lights of an amusement fair reflect in a small lake at Olympia park in Munich, Germany. Small platforms with birds seen in the lake. (Photo by Sven Hoppe/DPA via AP Photo) 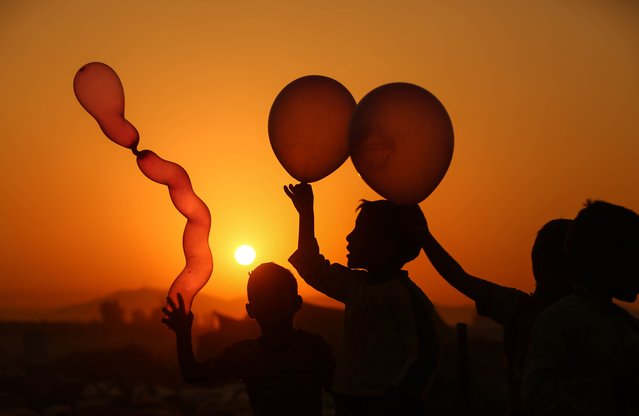 Syrian children play with balloons in the rebel-held town of Douma, on the eastern outskirts of Damascus, as Muslims celebrate the third day of the Eid al-Adha holiday on September 3, 2017. (Photo by Amer Almohibany/AFP Photo) 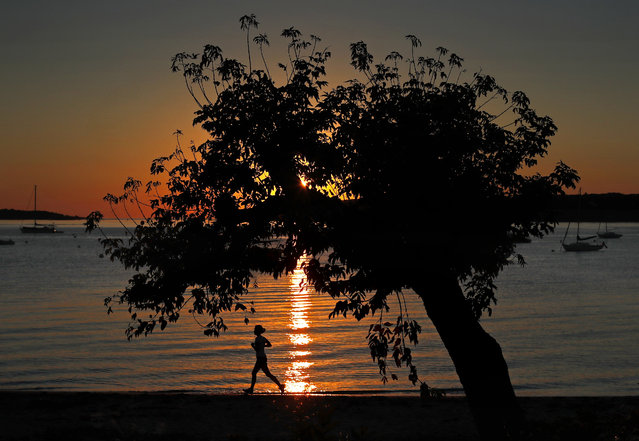 A runner gets in her exercise at dawn on Willard Beach, Wednesday, September 13, 2017, in South Portland, Maine. The state is enjoying a stretch of pleasant weather with just over a week of summer remaining on the calendar. (Photo by Robert F. Bukaty/AP Photo)
Edit Del
14 Sep 2017 08:17:00, post received 0 comments
Publication archive:
←   →
Popular tags:
All tags
Last searches: