Charming Afghanistan: Dogs of War Part 2
Throughout the course of the long war in Afghanistan, Coalition troops have relied on thousands of military working dogs to help keep them safe, and make their jobs easier. The dogs are trained to detect explosives, to find illegal drugs, to search for missing comrades, or target enemy combatants. Not only are they active on the front lines, but behind the lines they serve as therapy dogs, service dogs, and loyal companions. They also share the same risks as the ground troops, suffering injuries and sometimes death on the battlefields. Gathered here are images of these dogs and their handlers in Afghanistan and back home, from over the past several years, part of the ongoing series here on Afghanistan. 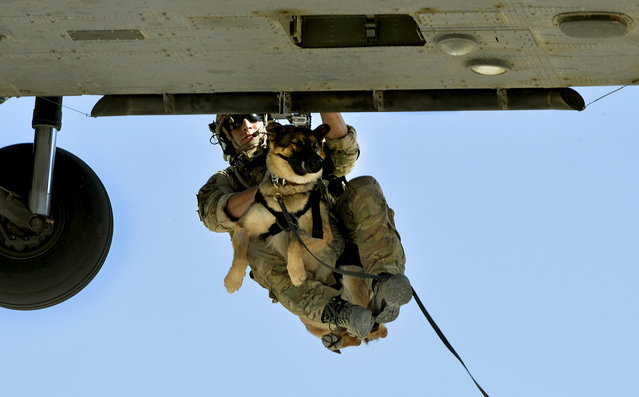 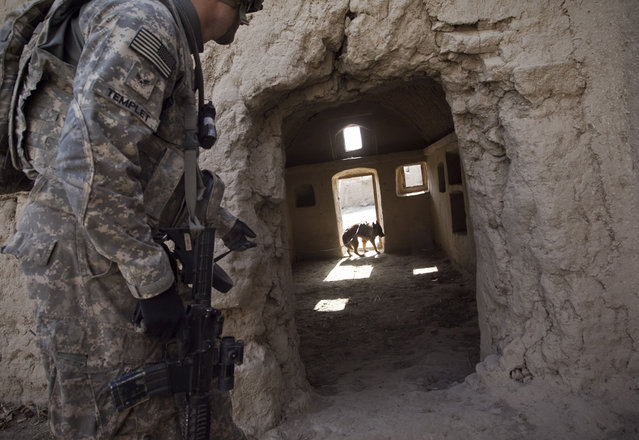 Basco, a patrol explosive detector dog with the 627 Security Forces Squadron, and his handler, Sergeant Matthew Templet, search for explosives in an abandoned house in Haji Ghaffar village during a clearance patrol in Zari district of Kandahar province on December 27, 2010. (Behrouz Mehri/AFP/Getty Images) 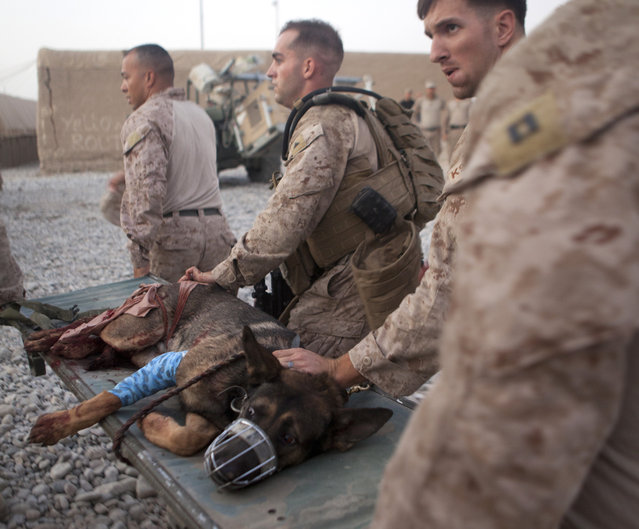 U.S. Marines from 1st Battalion, 5th Marines, Regimental Combat Team 8, carry Drak, an injured bomb-tracking dog, to an awaiting helicopter at Forward Operating Base Jackson on September 8, 2011. Both Drak and his handler, Sgt Kenneth A. Fischer, were flown out of the country for surgery and recovery. Eventually, in line with military custom, Fischer will adopt Drak and take him home. (USMC/Cpl. Logan W. Pierce) 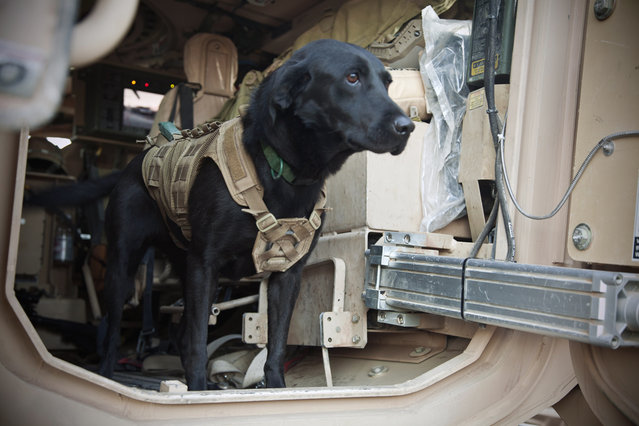 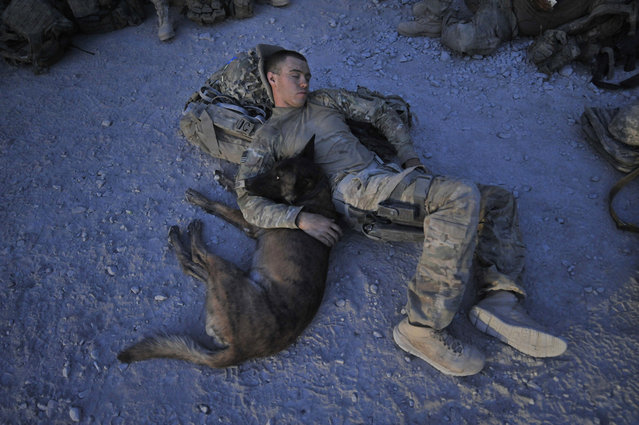 US Army Specialist Justin Coletti of the Afghanistan K-9 combat tracker team rests with Dasty, a Belgian Malinois, at an airfield on Forward Operating Base Pasab following a five-hour overnight air assault mission with Bravo Company, 2-87 Infantry Battalion, in Kandahar province on August 15, 2011. Dasty who has a rank of a Sergeant, is a military working dog trained to patrol and locate a targeted individual. (Romeo Gacad/AFP/Getty Images) 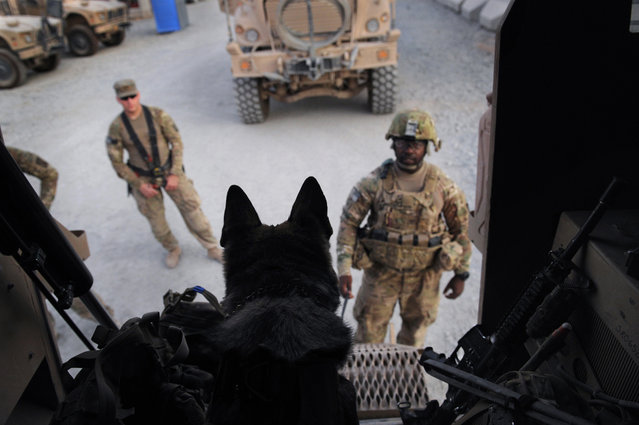 US Army Staff Sergeant Lindsey Thompson (right) of US Forces Afghanistan K-9 unit looks at Mayo, a German Shepherd as they prepare to board a convoy of armored vehicles from Forward Operating Base Pasab on an overnight ground assault mission in Kandahar province on August 14, 2011. Mayo who has a rank of Technical Sergeant is a military working dog trained for patrol and find bombs and improvised explosive devices. (Romeo Gacad/AFP/Getty Images) 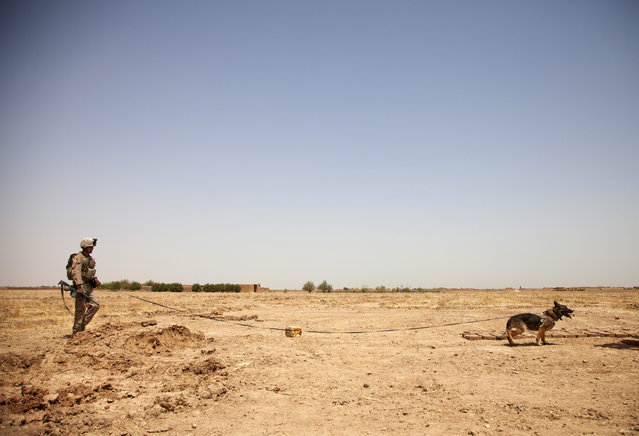 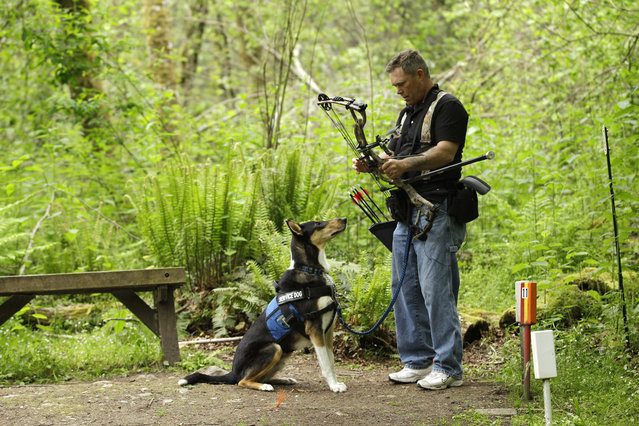 U.S. Army Spc. Mike Ballard stands with Apollo, his service dog, during an archery shooting session, on May 17, 2012, in Puyallup, Washington. Ballard says his dog helps him get through the worst symptoms of the post-traumatic stress disorder that are a remnant of an explosion in Afghanistan that ended his career as an Army medic. (AP Photo/Ted S. Warren) 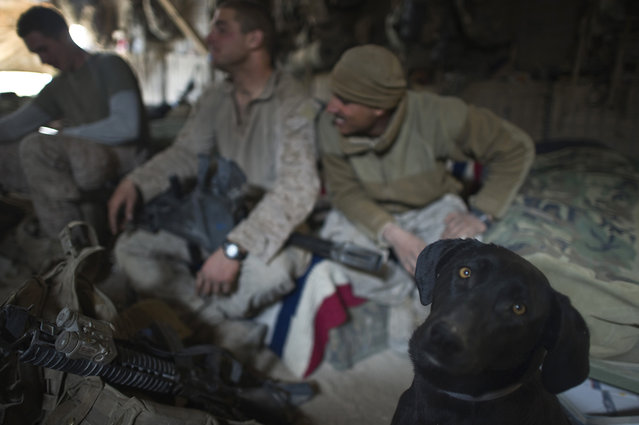 A military working dog looks at the camera as US Marines from 1st Battalion, 8th Marines clean their weapons before a patrol outside new Mirage base, on the south of Musa Qala District, Helmand province, on February 4, 2011. (Dmitry Kostyukov/AFP/Getty Images) 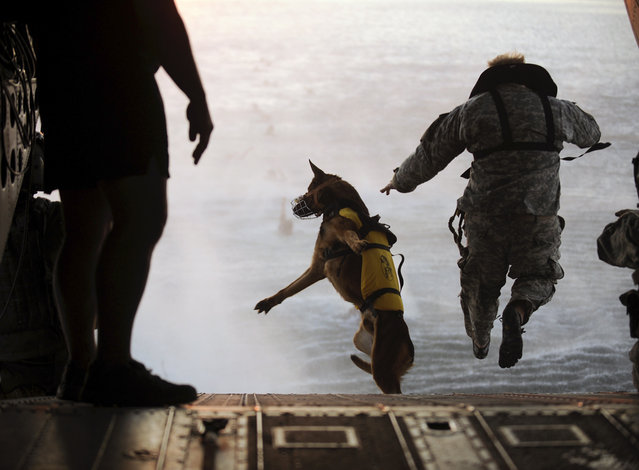 A U.S. Army soldier with the 10th Special Forces Group and his military working dog jump off the ramp of a CH-47 Chinook helicopter from the 160th Special Operations Aviation Regiment during water training over the Gulf of Mexico as part of exercise Emerald Warrior 2011 on March 1, 2011. Emerald Warrior is an annual two-week joint/combined tactical exercise sponsored by U.S. Special Operations Command designed to leverage lessons learned from operations in Afghanistan and Iraq. (USAF/Tech. Sgt. Manuel J. Martinez) 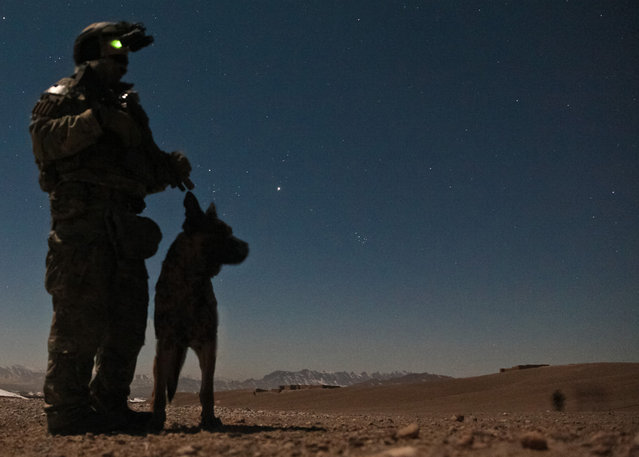 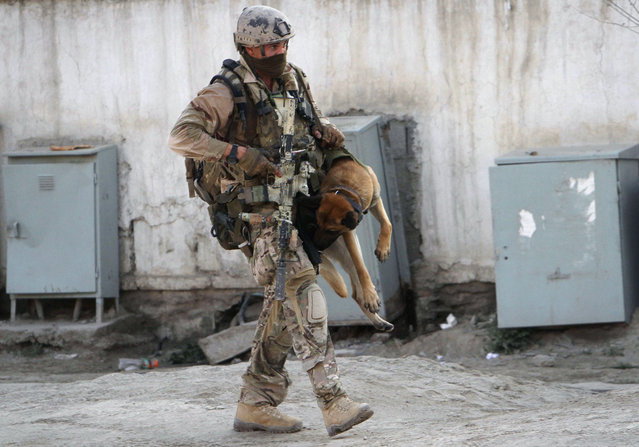 A soldier, part of the NATO forces, carries a sniffing dog after a gun battle in Kabul, Afghanistan, in this April 16, 2012 photo. A brazen, 18-hour Taliban attack on the Afghan capital ended early Monday when insurgents who had holed up overnight in two buildings were overcome by heavy gunfire from Afghan-led forces and pre-dawn air assaults from U.S.-led coalition helicopters. (AP Photo/Musadeq Sadeq)

Marine Sgt. Ross Gundlach, of Madison, Wisconsin, gets a kiss from Casey, a four-year-old yellow labrador that he worked with while deployed in Afghanistan, as the two are reunited during a surprise ceremony at the Statehouse in Des Moines, Iowa, on May 17, 2013. Gundlach thought he was traveling to the Iowa Capitol to tell state officials why he should take ownership of the dog, which has been working for the state fire marshal's office. Gundlach didn't realize officials already had made arrangements to get another dog for explosives detection. (AP Photo/Charlie Neibergall) 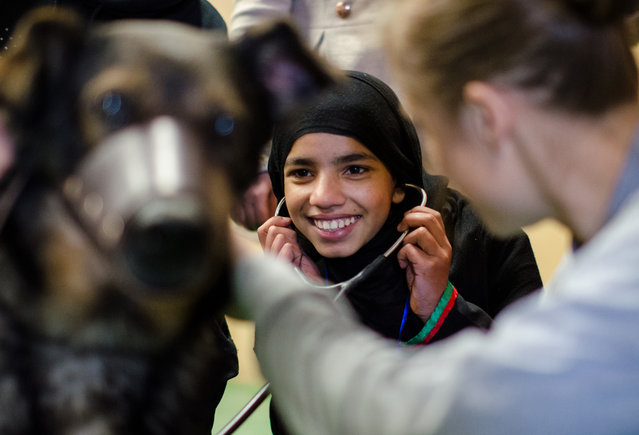 An Afghan student listens to the heartbeat of a dog during Operation Outreach Afghanistan's tour of the Camp Phoenix veterinary clinic. (US Army National Guard/Capt. Mike Thompson) 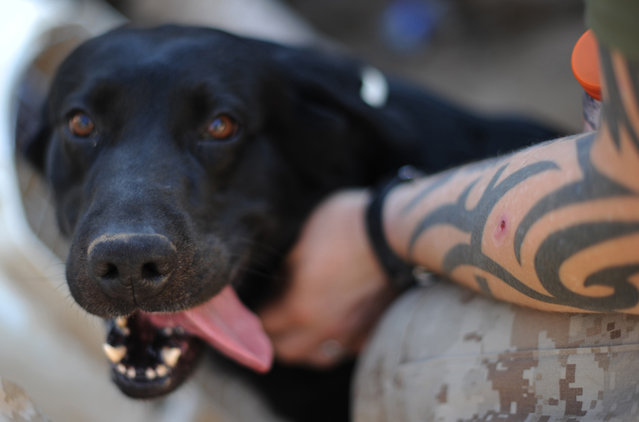 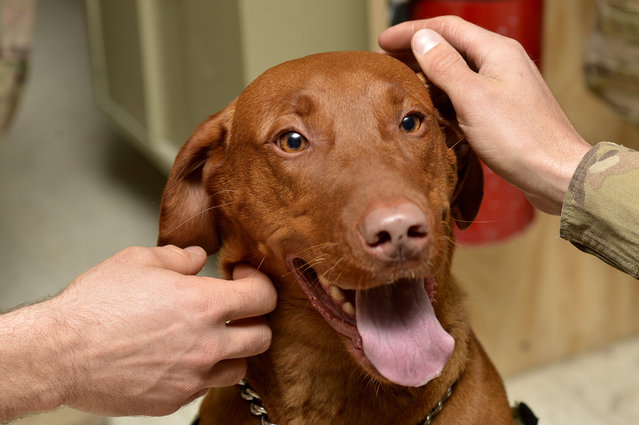 Captain Katie Kopp from 2nd Battalion, 12th Infantry Regiment of the 4th Brigade Combat Team, talks to therapy dog Hank during Hank's visit to Combat Outpost Nangalam in the Pech River Valley of Afghanistan's Kunar Province on July 3, 2012. Hank is the only Boston Terrier therapy dog deployed in this region to interact with soldiers as a stress relief. (Reuters/Lucas Jackson) 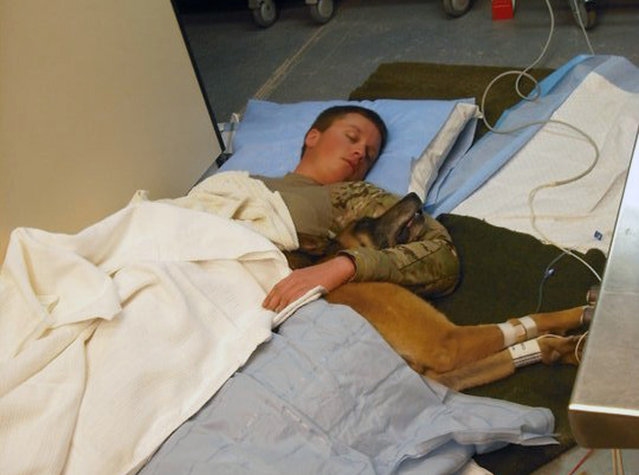 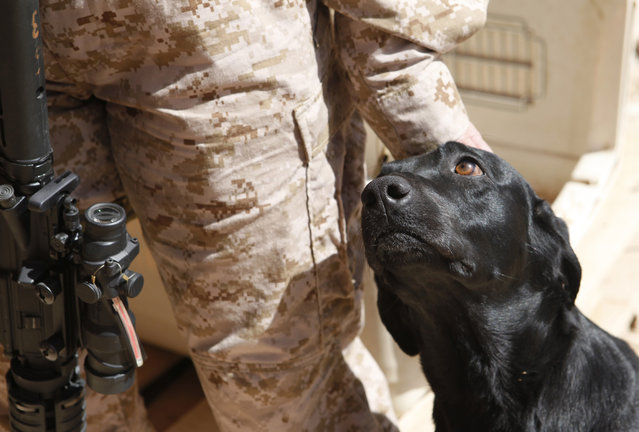