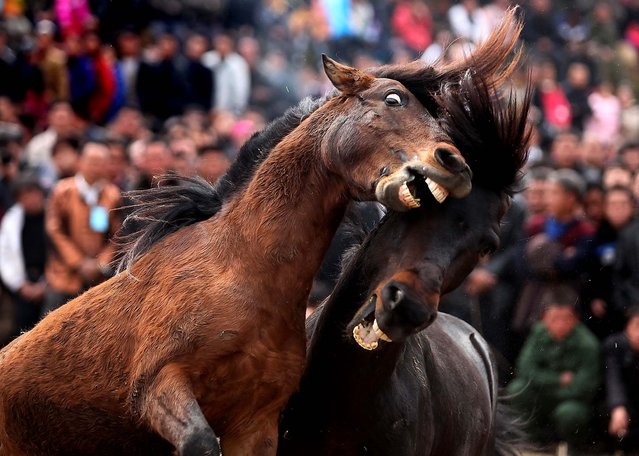 Two stallions go at each other at a horse fighting contest in Rongshui, China. (Photo by China Foto Press) 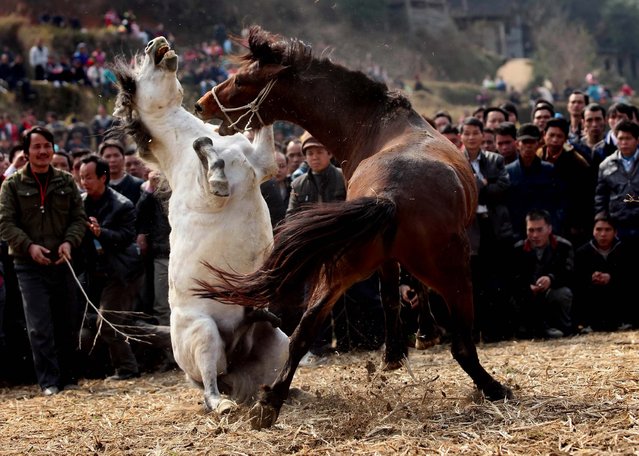 Two stallions confront each other at a horse fighting contest in Rongshui, China. More than 30 horses from surrounding regions took part in the traditional activity of the Lantern festival. (Photo by China Foto Press) 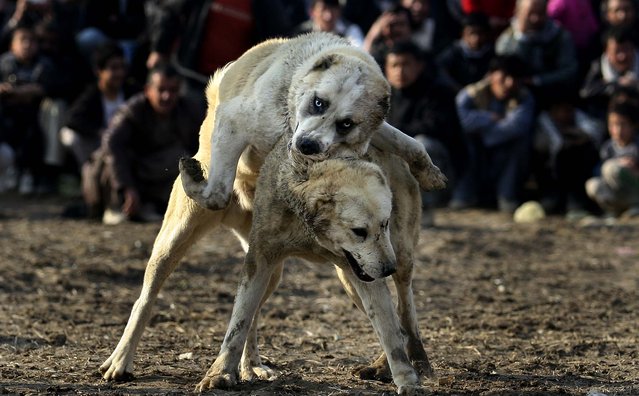 Spectators watch a dogfight in Kabul, Afghanistan. Dog fighting is a popular pastime among Afghans during the winter season, as public matches are held every Friday, which is the official weekly holiday in Afghanistan. (Photo by Ali Hamed Haghdoust/Associated Press) 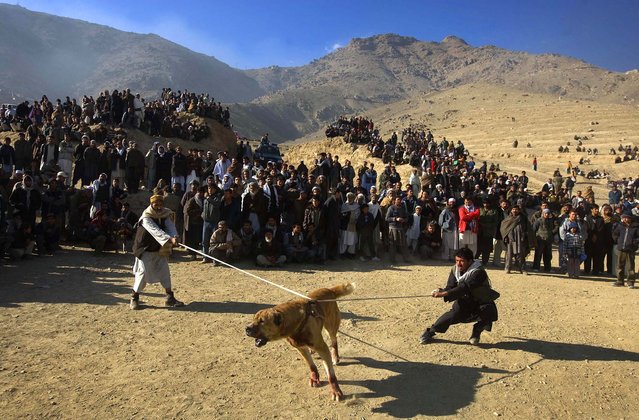 Afghan men try to restrain a dog moments before a high stakes dog-fighting match in Kabul. Outlawed under Taliban rule and now legal and very popular in Afghanistan, every Friday from November to March thousands of Afghans gather on the western outskirts of Kabul to watch the dog fighting matches. Despite being one of the poorest countries in the world, in Afghanistan a good fighting dog can be worth several thousand dollars. (Photo by David Furst/AFP Photo) 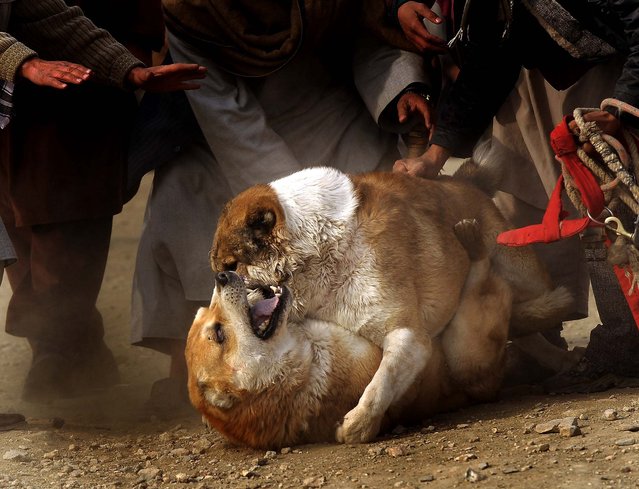 Afghan spectators look on as a dog bites the neck of another during a match in Kabul. (Photo by Massoud Hossaini/AFP Photo) 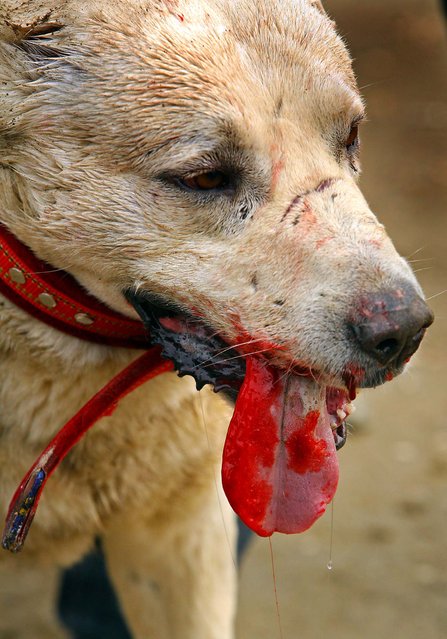 A fighting dog bleeds after the weekly dog fights in Kabul. (Photo by Majid Saeedi) 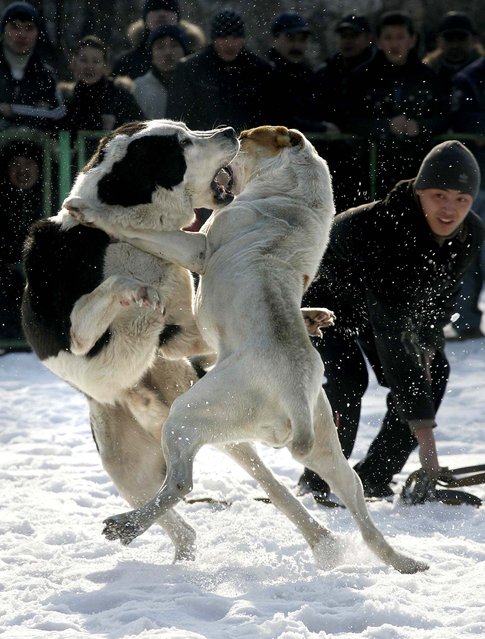 People watch wolfhounds fight at a stadium in Bishkek, Kyrgyzstan. The fight was organized by a local dog breeders club with the aim of finding the dog best suited to improve the Asian Shepherd breed, organizers said. Some 50 dog owners brought their dogs to fight for the title. (Photo by Vyacheslav Oseledko/AFP Photo) 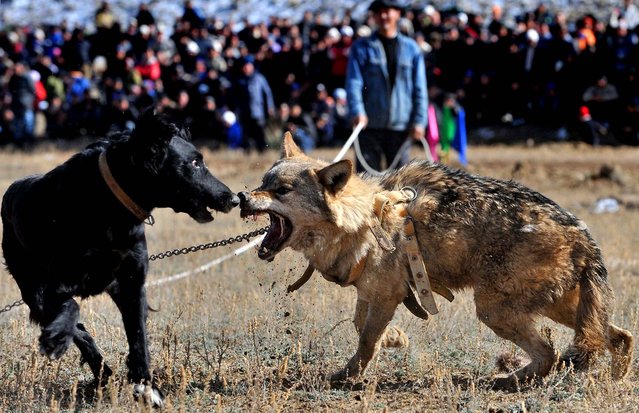 A chained wolf retaliates against a dog during a traditional hunting festival in the Kyrgyz village of Bokonbayevo. (Photo by Vyacheslav Oseledko/AFP Photo) 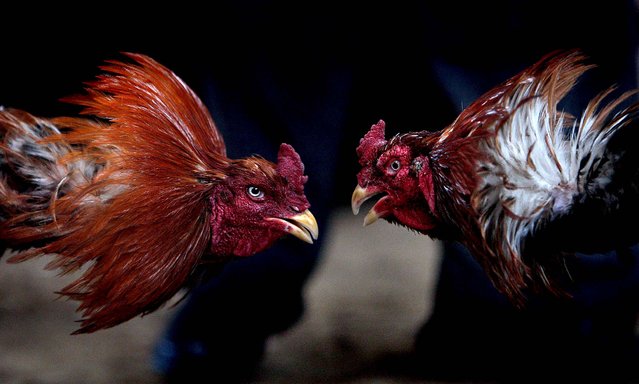 Roosters duel during a cockfighting match in Kabul. Cockfighting, known as “Murgh Janghi” In the Afghan Dari language, is a popular game among Afghans during the winter season. The heels and bills of the birds are sharpened before fights, which run around 4-6 rounds with each round lasting between 10 to 20 minutes with a gap of 5 minutes in between bouts. Some $2,000 to $4,000 can exchange hands among spectators placing bets during these fights. (Photo by Behrouz Mehri/AFP Photo) 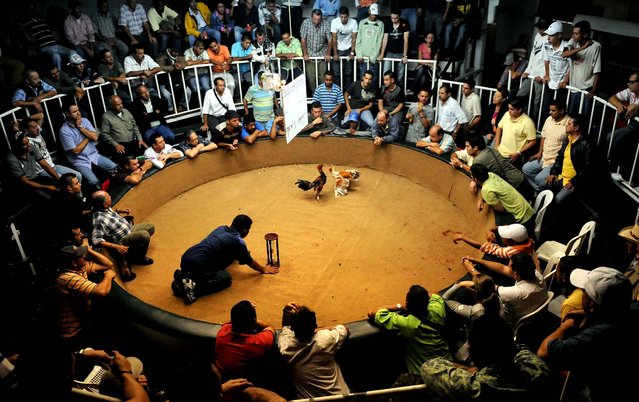 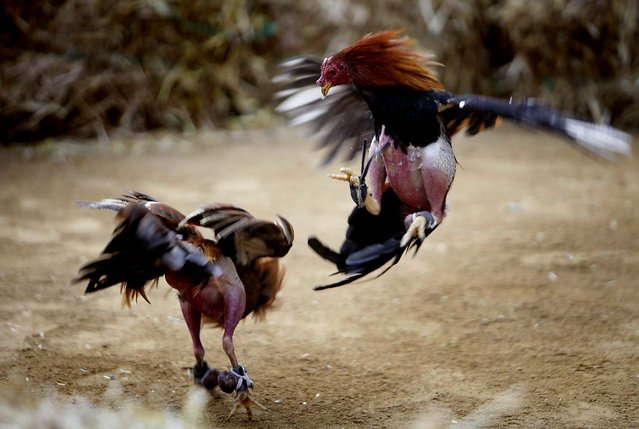 Roosters fight during a cockfight in Quito, Ecuador. Ecuador's President Rafael Correa has called a referendum asking Ecuadoreans to ban bullfighting, cockfighting and other pursuits where animals are killed for human entertainment. (Photo by Dolores Ochoa/Associated Press) 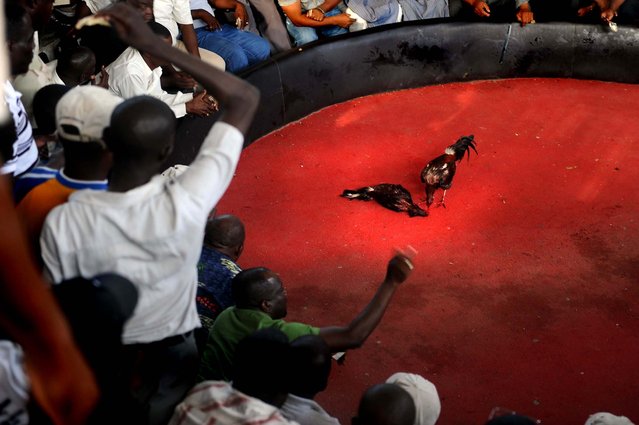 Haitians watch a cockfight in Petionville. Cockfighting is Haiti's most passionate gaming event and takes place every weekend in almost every village and neighborhood across the country. (Photo by Eitan Abramovich/AFP Photo) 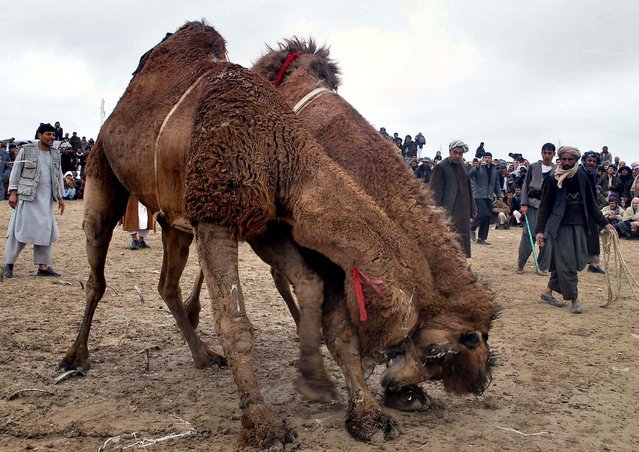 Camels fight in Mazar-i-Sharif, north of Kabul, Afghanistan. Camel fighting is popular in the north of the country. (Photo by Mustafa Najafizada/Associated Press) 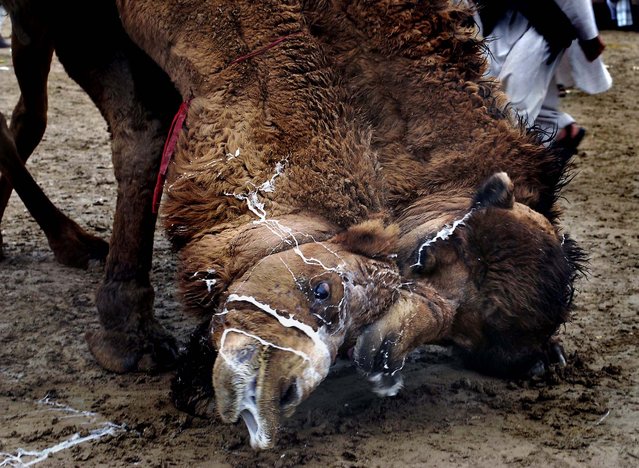 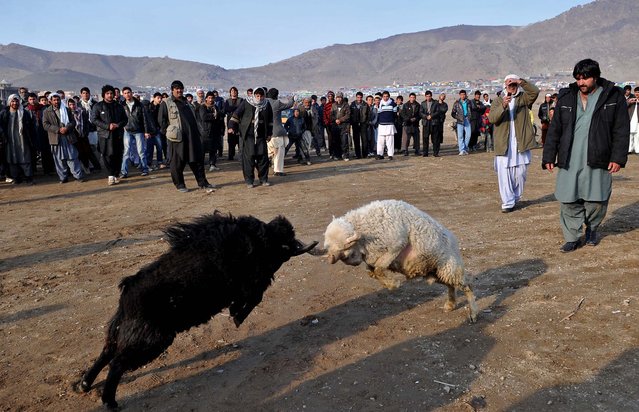 Afghan men watch a ram-fighting game on the outskirts of northern Kabul. The game, as well as dog fighting, camel-fighting and Buzkashi, are part of Afghanistan's social entertainment. (Photo by Massoud Hossaini/AFP Photo) 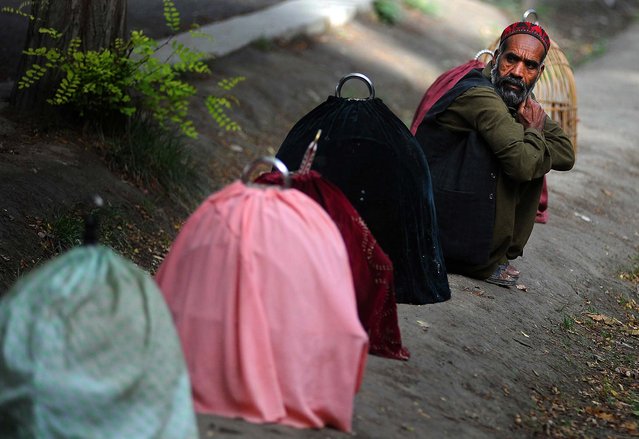 An Afghan man watches over caged fighting partridges as he waits for an oppurtunity for his birds to participate in a pastime called “kabk” at the Central Park in Kabul. In Afghanistan, an extremely poor country, hundreds of adults and children come from early morning until noon carrying their partridges in decorated cages covered with cloth to find an opponent and wager on the fights. (Photo by Yuri Cortez/AFP Photo) 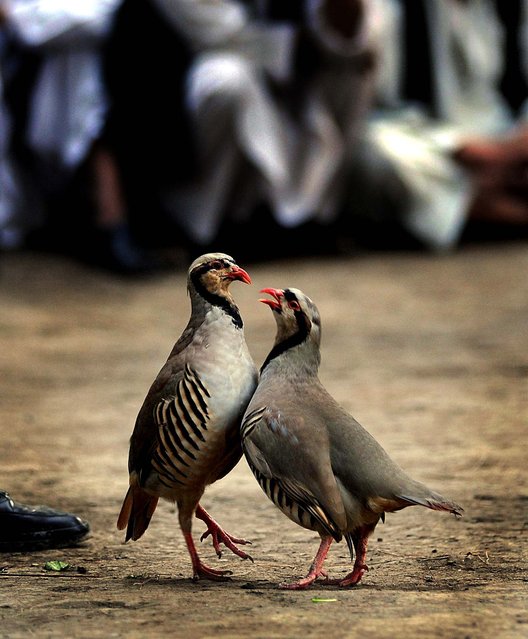 Partridges fight at a park in Kabul. Partridge-fighting, a popular game amongst Afghans which was banned during the Taliban together with other sports such as dog fighting, is enjoying a resurgence among the population. (Photo by Yuri Cortez/AFP Photo) 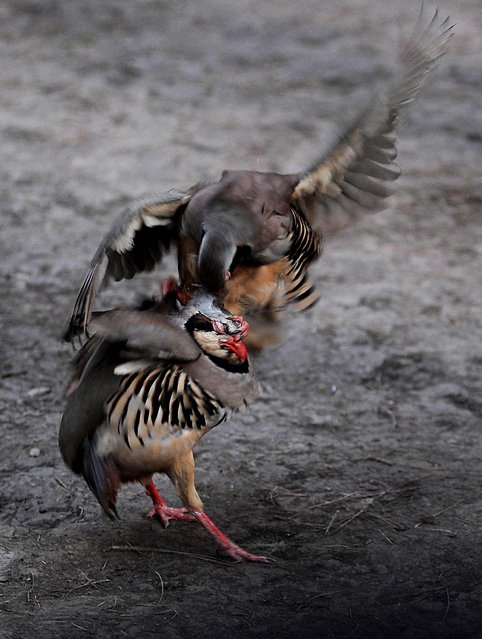