Disgusting South Korean Restaurants Serve Dog Meat
“Dog meat refers to edible parts and the flesh derived from (predominantly domestic) dogs. Human consumption of dog meat has been recorded in many parts of the world, including ancient China, ancient Mexico, and ancient Rome. According to contemporary reports, dog meat is consumed in a variety of countries such as Switzerland, China, Vietnam, the Philippines, and Korea. In addition, dog meat has also been used as survival food in times of war and/or other hardships.

In contemporary times, some cultures view the consumption of dog meat to be a part of their traditional cuisine, while others consider consumption of dog to be inappropriate and offensive. In response to criticisms, proponents of dog meat have argued that distinctions between livestock and pets is subjective, and that there is no difference with eating the meat of different animals, while countering that those critical of dog meat consumption are guilty of cultural supremacy, if not racism. Eating dog is forbidden under Jewish and Islamic dietary laws.

In South Korea (officially the Republic of Korea), dog meat is eaten nationwide and all year round, although it is most commonly eaten during summer.

The Korea Food & Drug Administration recognizes any edible product other than drugs as food. In the capital city of Seoul, the sale of dog meat was outlawed by regulation on February 21, 1984 by classifying dog meat as 'repugnant food' (혐오식품), but the regulation was not rigorously enforced except during the 1988 Seoul Olympics. In 2001, the Mayor of Seoul announced there would be no extra enforcement efforts to control the sale of dog meat during the 2002 FIFA World Cup, which was partially hosted in Seoul. In March 2008, the Seoul city government announced its plan to put forward a policy suggestion to the central government to legally classify slaughter dogs as livestock, reigniting debate on the issue.

South Korean Food Sanitary Law (식품위생법) does not include dog meat as a legal food ingredient. Also, dog meat has been categorized as “repugnant food” (혐오식품) based on a regulation issued by Seoul Metropolitan Government, of which using as food ingredient is not permitted.

However, the laws are not strictly enforced. The primary dog breed raised for meat, the Nureongi (누렁이), or Hwangu (황구); which is a kind of mix-breed dog, differs from those breeds raised for pets which Koreans keep in their homes.

There is a large and vocal group of Koreans who are against the practice of eating dogs. There is also a large population of people in Korea that do not eat or enjoy the meat, but do feel strongly that it is the right of others to do so. There is a smaller but still vocal group of pro-dog cuisine people in South Korea who want to popularize the consumption of dog in Korea and the rest of the world. A group of pro-dog meat individuals attempted to promote and publicize the consumption of dog meat worldwide during the run-up to the 2002 Fifa World Cup, co-hosted by Japan and South Korea, which prompted retaliation from animal rights campaigners and prominent figures such as Brigette Bardot to denounce the practice. Opponents of dog meat consumption in South Korea are critical of practices that are claimed to improve the flavour of dog meat in Korean tradition, such as beating and hanging.

The restaurants that sell dog meat do so, often exclusively, at the risk losing their restaurant licenses. A case of a dog meat wholesaler brought up on charges of selling dog meat in arose in 1997. However, an appeals court acquitted the dog meat wholesaler, ruling that dogs were socially accepted as food. According to the National Assembly of South Korea, more than 20,000 restaurants, including the 6484 registered restaurants, served soups made from dog meat in Korea in 1998. In 1999 the BBC reported that eighty-five hundred tons of dog meat were consumed annually, with another 93,600 tons used to produce a medicinal tonic called gaesoju (개소주). As of 2007, the dogs were no longer being beaten to death as they had been in past times.

Dog meat is often consumed during the summer months and is either roasted or prepared in soups or stews. The most popular of these soups is bosintang and gaejang-guk, a spicy stew meant to balance the body's heat during the summer months. This is thought to ensure good health by balancing one's “ki” or vital energy of the body. A 19th century version of gaejang-guk explains the preparation of the dish by boiling dog meat with vegetables such as green onions and chili pepper powder. Variations of the dish contain chicken and bamboo shoots”. – Wikipedia

Photos: A kitchen hand prepares dog meat at a restaurant on July 4, 2005 in Gwacheon, South Korea. Dog meat is a traditional dish in Korea dating back to the Samkuk period (period of the three kingdoms BC 57 – AD 668). Although many recipes existed historically for dog meat, now chefs only make soups, or dishes using boiled or roasted meat. Koreans traditionally eat dog meat on the hottest day of the summer, for it's reputed benefits of virility, invigoration and health. (Photo by Chung Sung-Jun/Getty Images) 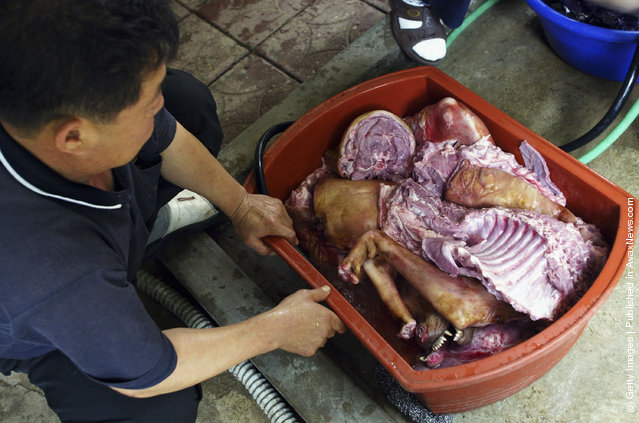 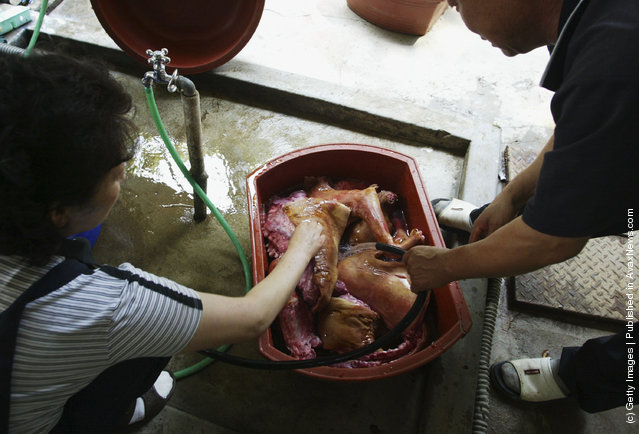 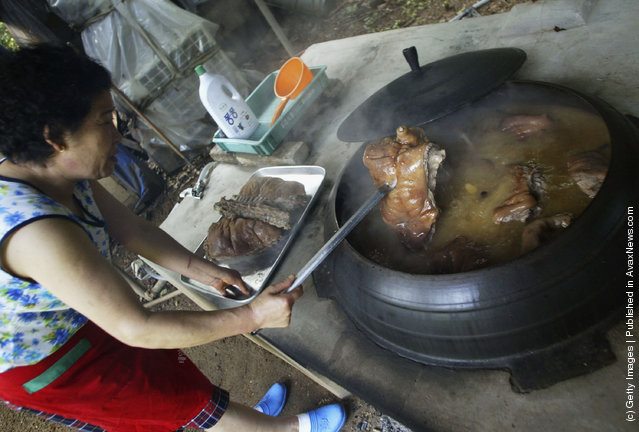 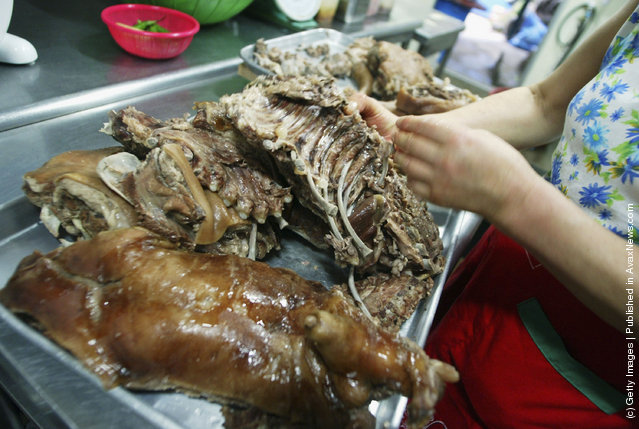 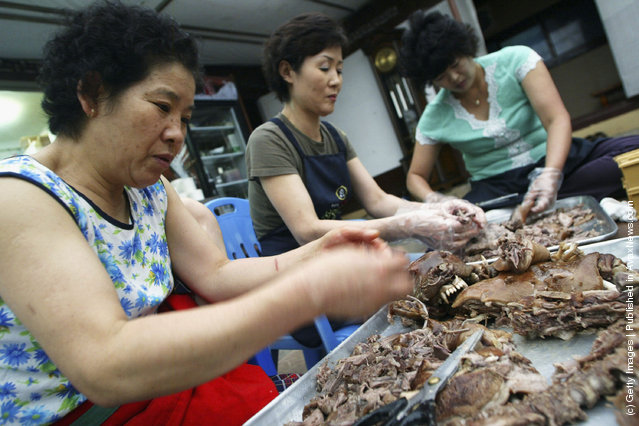 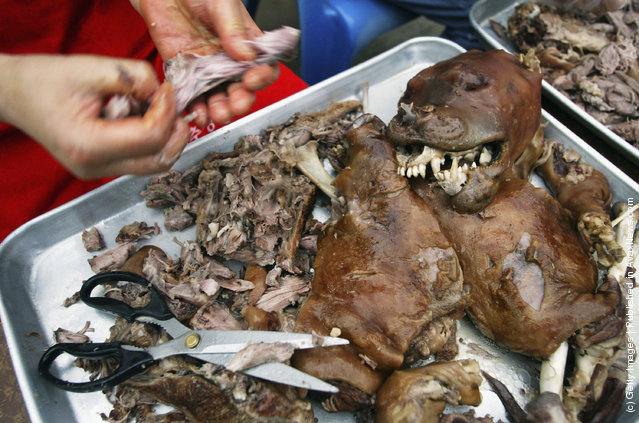 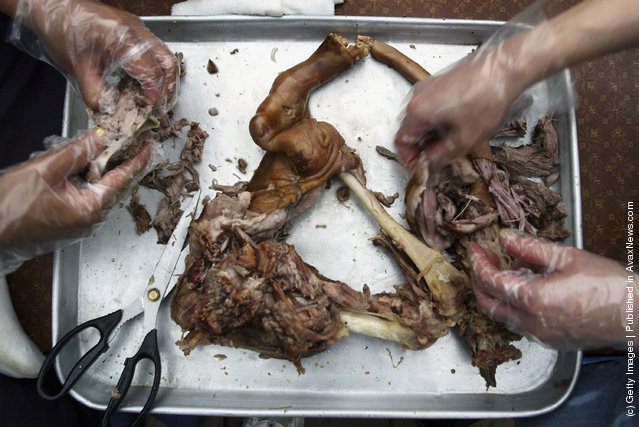 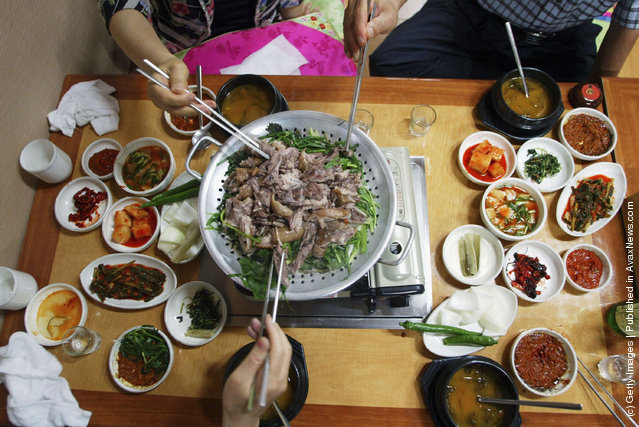