Educative The Giant Clam A.K.A. Tridacna Gigas
“The giant clam, Tridacna gigas (known as pā’ua in Cook Islands Māori), is the largest living bivalve mollusc. T. gigas is one of the most endangered clam species. It was mentioned as early as 1825 in scientific reports. One of a number of large clam species native to the shallow coral reefs of the South Pacific and Indian oceans, they can weigh more than 200 kilograms (440 lb) measure as much as 120 cm (47 in) across, and have an average lifespan in the wild of 100 years or more. They are also found off the shores of the Philippines, where they are called taklobo. T. gigas lives in flat coral sand or broken coral and can be found at depth of as much as 20 m (66 ft). Its range covers the Indo-Pacific, but populations are diminishing quickly and the giant clam has become extinct in many areas where it was once common. T. maxima has the largest geographical distribution among giant clam species; it can be found in high- or low-islands, lagoons, or fringing reefs. Its rapid growth rate is likely due to its ability to cultivate plants in its body tissue.

Although larval clams are planktonic, they become sessile in adulthood. The creature's mantle tissues act as a habitat for the symbiotic single-celled dinoflagellate algae (zooxanthellae) from which it gets nutrition. By day, the clam opens its shell and extends its mantle tissue so that the algae receive the sunlight they need to photosynthesize.

The largest known T. gigas specimen measured 137 cm. It was discovered around 1817 on the north western coast of Sumatra. The weight of the two shells was 230 kilograms (510 lb). This suggests that the live weight of the animal would have been roughly 250 kilograms (550 lb). Today these shells are on display in a museum in Northern Ireland.

Another unusually large giant clam was found in 1956 off the Japanese island of Ishigaki. However, it was not examined scientifically before 1984. The shell's length was 115 cm and the weight of the shells and soft parts was 333 kilograms (730 lb). Scientists estimated the live weight to be around 340 kilograms (750 lb).

The giant clam is considered a delicacy in Japan (known as Himejako), France, South East Asia and many Pacific Islands. Some Asian foods include the meat from the muscles of clam. On the black market, giant clam shells are sold as decorative accouterments. At times large amounts of money were paid for the adductor muscle, which Chinese people believed have aphrodisiac powers.

As is often the case with uncharacteristically large species, the giant clam has been historically misunderstood. It was known in times past as the killer clam or man-eating clam, and reputable scientific and technical manuals once claimed that the great mollusc had caused deaths; versions of the U.S. Navy Diving Manual even gave detailed instructions for releasing oneself from its grasp by severing the adductor muscles used to close its shell.

In a colorful account of the discovery of the Pearl of Lao Tzu, Wilburn Cobb said he was told that a Dyak diver was drowned when the Tridacna closed its shell on his arm. Today the giant clam is considered neither aggressive nor particularly dangerous. While it is certainly capable of gripping a person, the shell's closing action is defensive, not aggressive and the shell valves close too slowly to pose a serious threat. Furthermore, many large individuals are unable to completely close their shells.

The IUCN lists the giant clams as vulnerable. There is concern among conservationists about whether those who use the species as a source of livelihood are overexploiting it. The numbers in the wild have been greatly reduced by extensive harvesting for food and the aquarium trade”. – Wikipedia 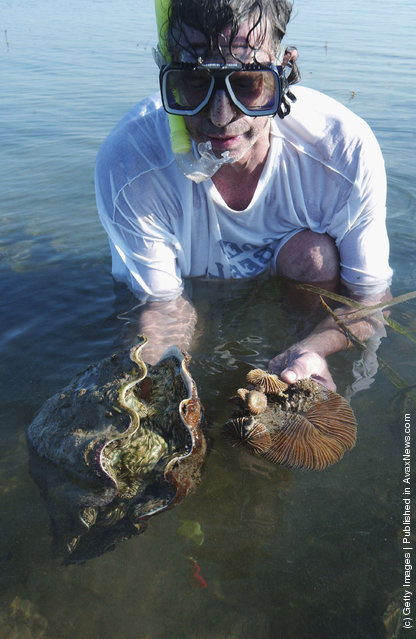 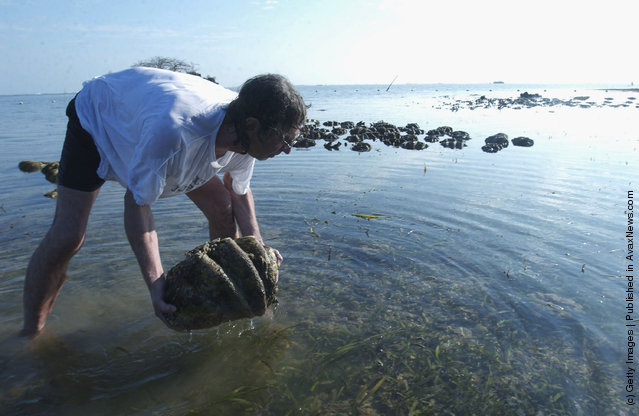 Belgian socio-cultural ecologist Paul Van Doorn repositions a Tridacna Gigas, a type of Giant Clam, in a small sanctuary January 23, 2004 near Bolinao in the Northern Philippines. The clams, prime builders for coral reefs and providing shelter for spawning fish and other marine life, are exposed by low tides in the sanctuary. Overfishing and pollution throughout the country are not only threatening food security, but are also starting to choke one of the few working clam sanctuaries in the world. (Photo by David Greedy/Getty Images) 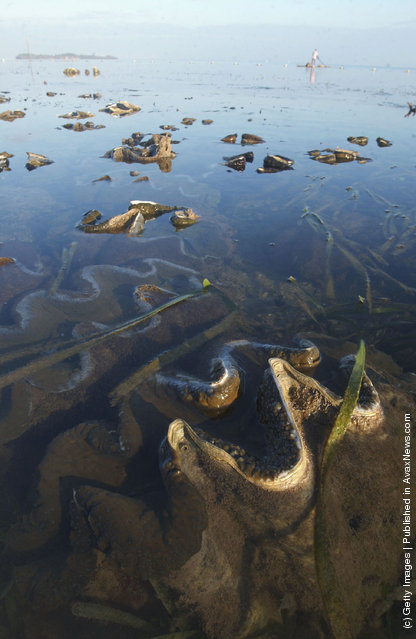 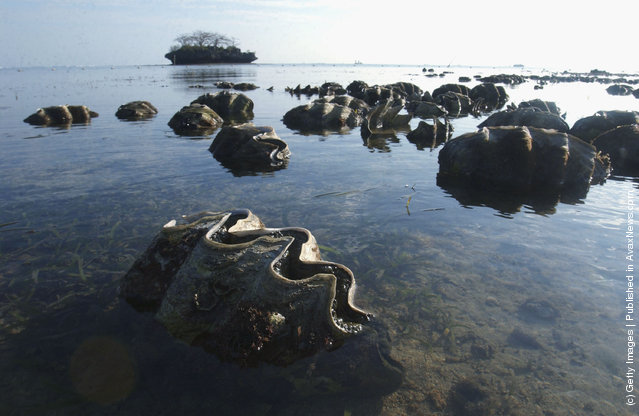 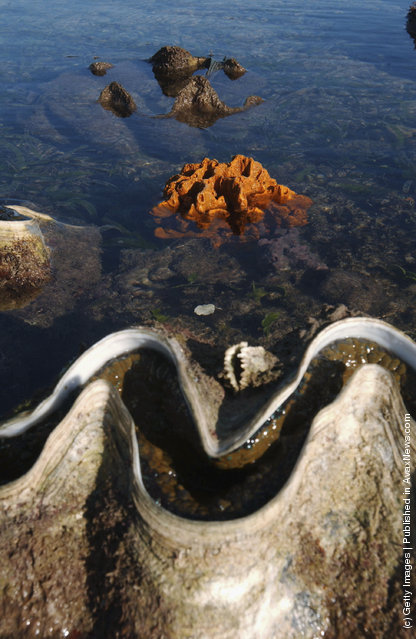 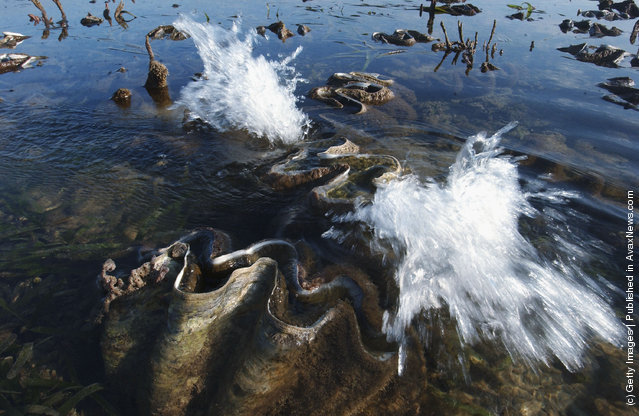 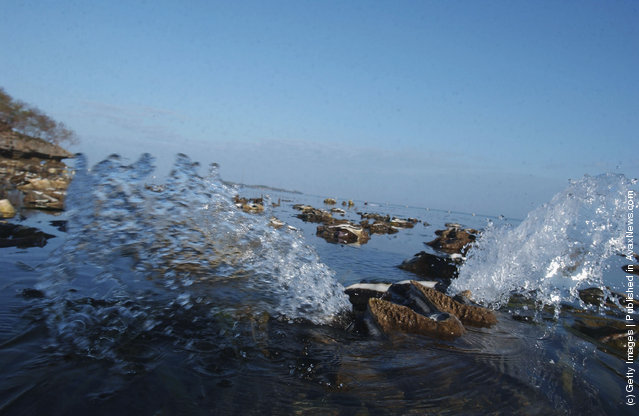 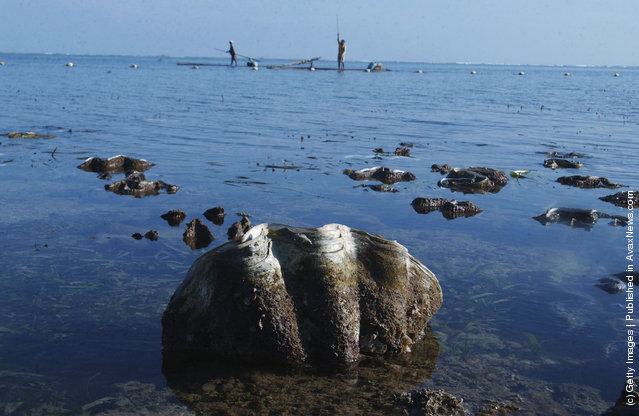 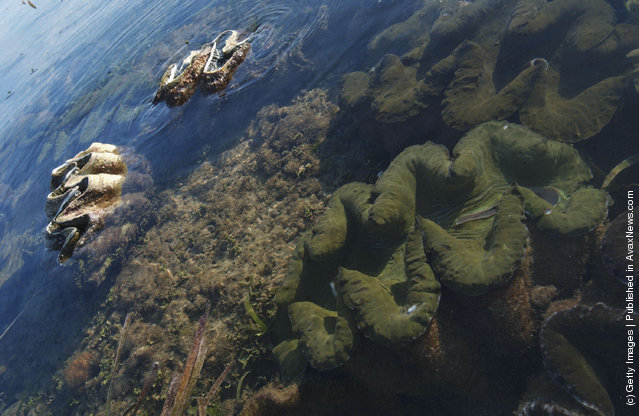 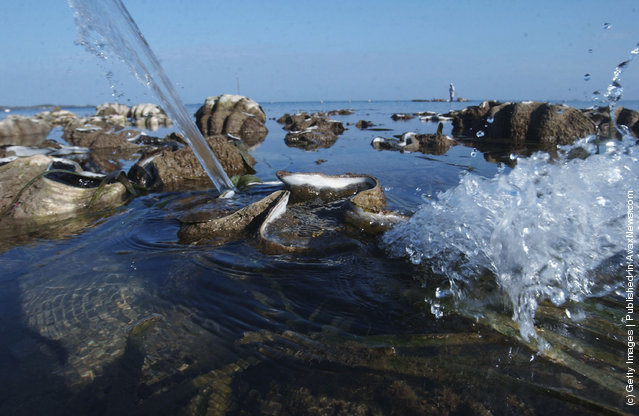