Educative Lorenzo Quinn
“Lorenzo Quinn (born May 7, 1966) is an Italian artist and sculptor and the fifth son of the actor Anthony Quinn. By the age of 21 he gained the respect of the New York art community when he was commissioned to make an art work for the United Nations of which a stamp was later made. Quinn was later selected to head the Absolut Vodka ad campaign for which only top international artists are chosen.

Quinn has exhibited his works in galleries and museums around the globe. In 2008 Evolution, a major exhibition of Quinn’s output, was chosen to inaugurate the new premises of Halcyon Gallery in Mayfair, London, and the gallery published an important book on his work. Many of the sculptures in Evolution featured the symbol that has become synonymous with Quinn: the human hand. «I wanted to sculpt what is considered the hardest and most technically challenging part of the human body», he explains. «The hand holds so much power – the power to love, to hate, to create, to destroy. I have injected a lifetime of experience into Evolution; it is about my past, present and future».

Equilibrium, an exhibition of Quinn’s monumental sculptures, followed in November 2009, coinciding with the installation of Give and Take III in Berkeley Square for six months. Included in the show were several important new sculptures – male and female forms lying in egg-shaped hemispheres – and Home Sweet Home – a marble woman cocooned in barbed wire. The exhibition title reflects Quinn’s belief: «It is essential to find a balance in life. Many times that balance is achieved with the help of the people who surround us and hold us firmly to the ground, and without whom we would float into perdition»”. – Wikipedia 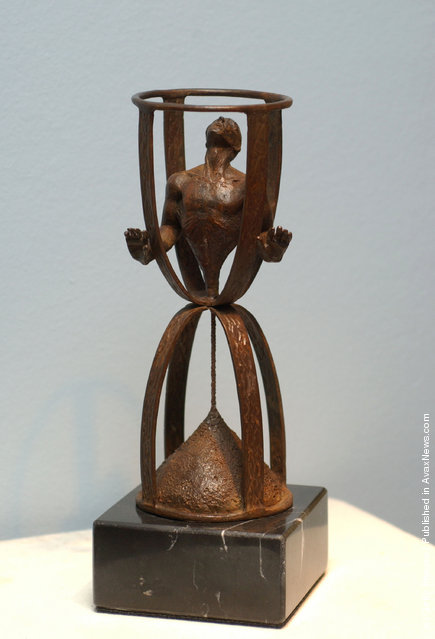 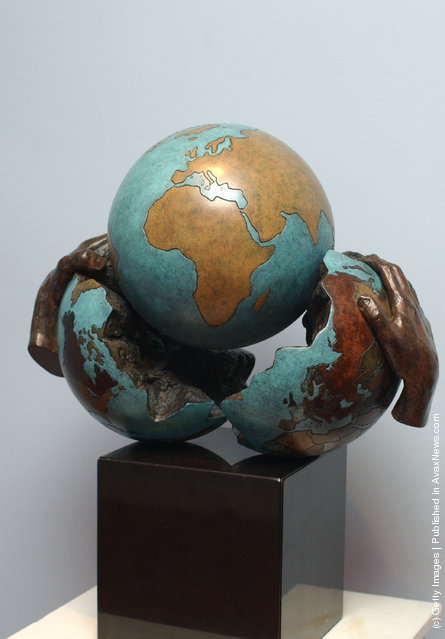 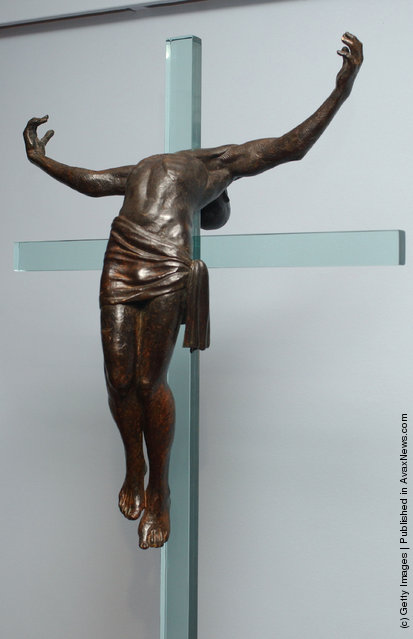 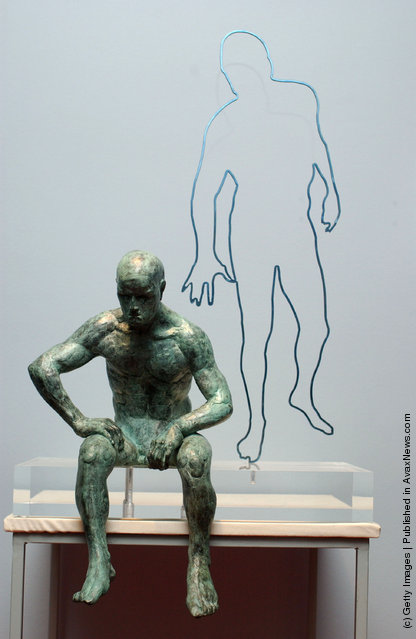 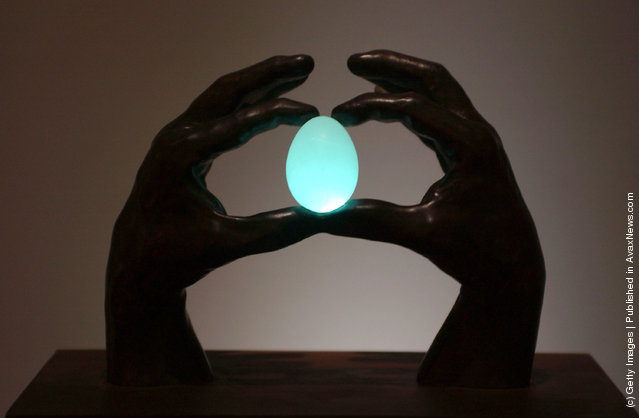 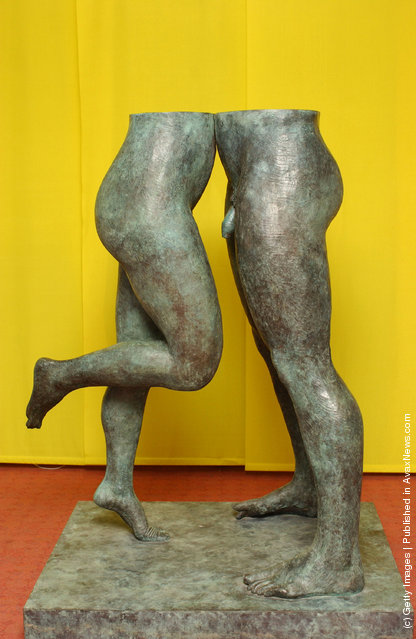 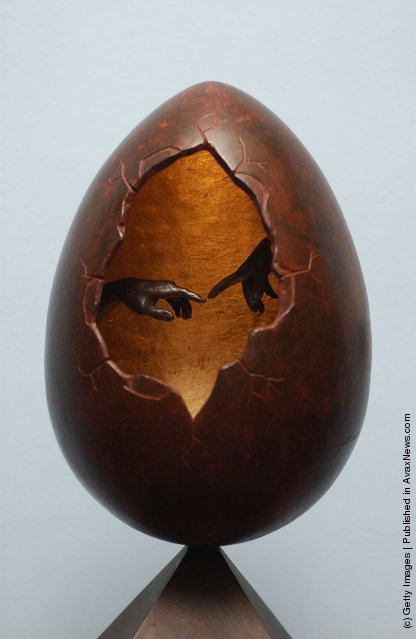 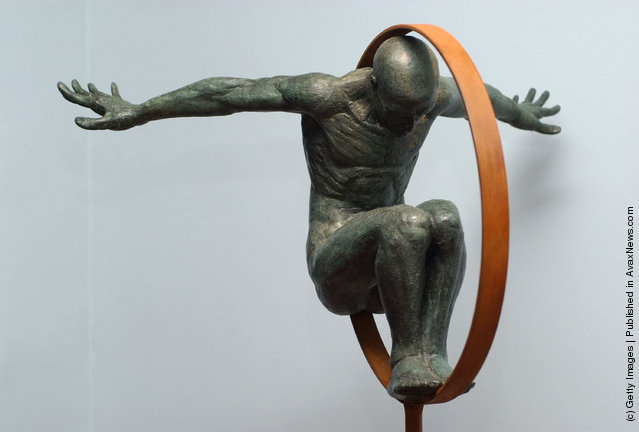 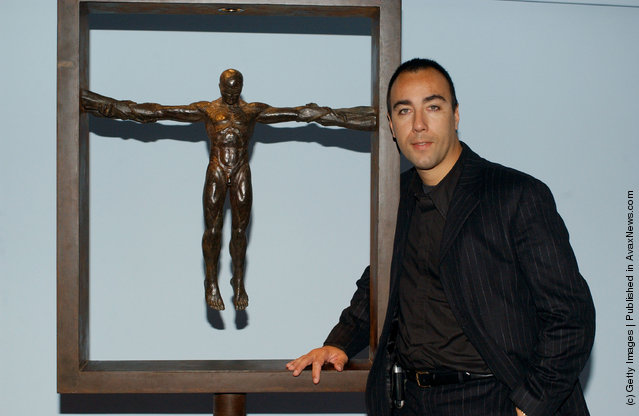 Lorenzo Quinn, son of Anthony Quinn, stands next to one of his scultpures at the Museo Tiflologico January 21, 2004 in Madrid, Spain. (Photo Carlos Alvarez/Getty Images) 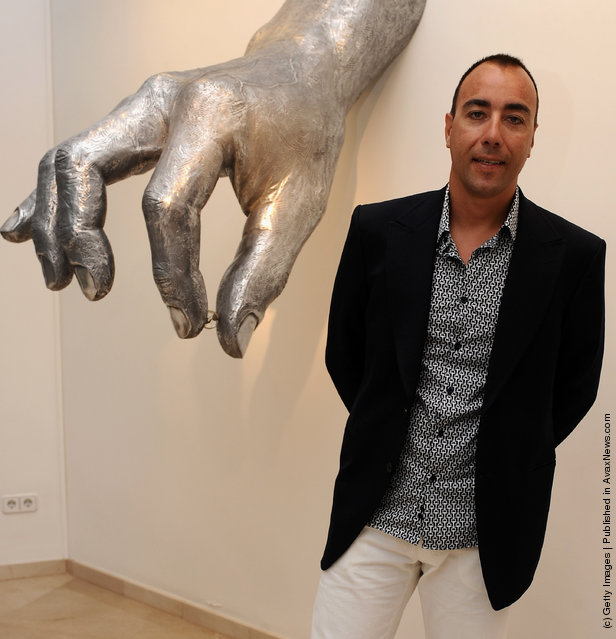 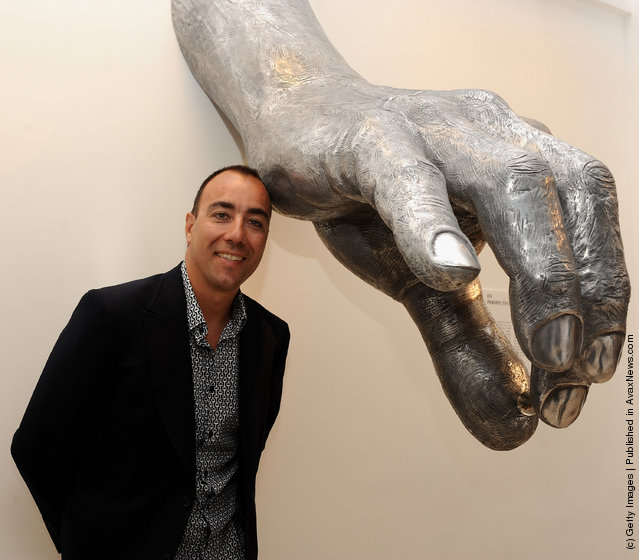 Artist Lorenzo Quinn attends the opening of an exhibit of his sculptures at Gabriel Vanrell Gallery on July 31, 2008 in Mallorca, Spain. (Photo by Carlos Alvarez/Getty Images) 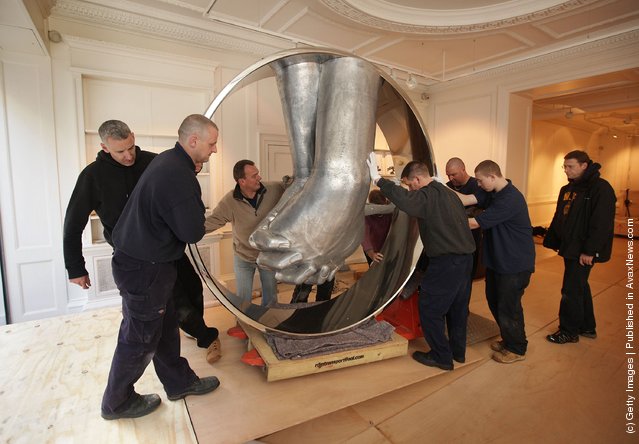 Lorenzo Quinn's sculpture “Love” is lowered through the front window of Halcyon Gallery 24 Bruton Street for his major new exhibition “Equilibrium” on November 7, 2009 in London. 26 sculptures weighing a total of 12,000 KG are being installed, some of which are so large that the windows of the Mayfair Gallery had to be removed. (Photo by Peter Macdiarmid/Getty Images for Halcyon Gallery) 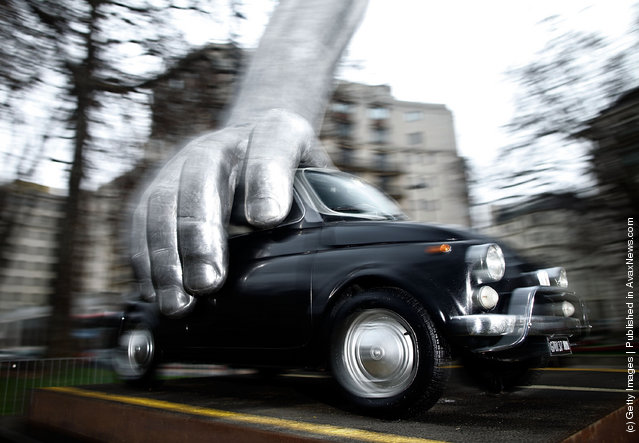 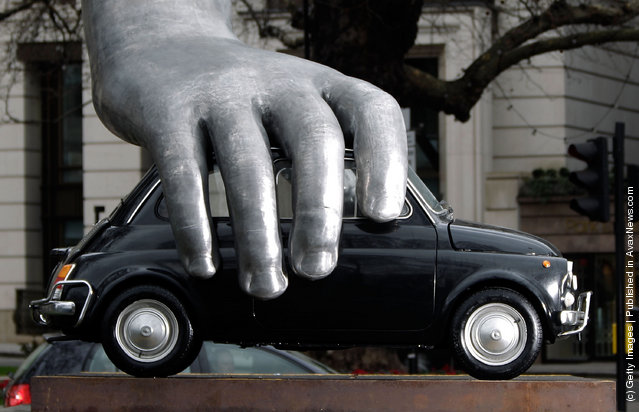 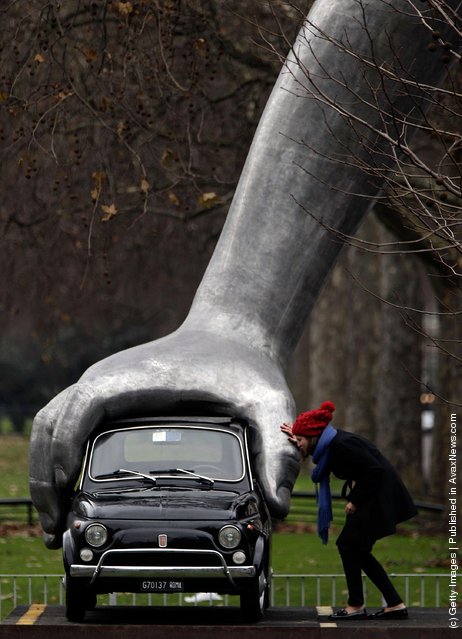 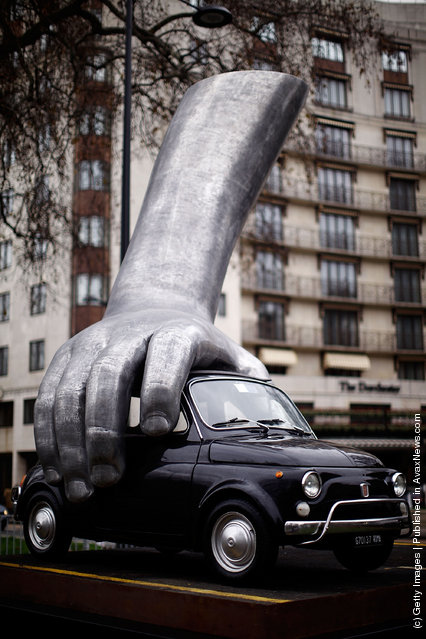 Lorenzo Quinn's Vroom Vroom sculpture is installed in its new setting on Park Lane on January 23, 2011 in London, England. The four-metre high sculpture, consists of a vintage Fiat 500, the first car that the sculptor ever bought, grasped by an oversized aluminium child's hand modelled from Quinn's son. The exhibition has previously been displayed in Valencia and Abu Dhabi. (Photo by Matthew Lloyd/Getty Images for Halcyon Gallery) 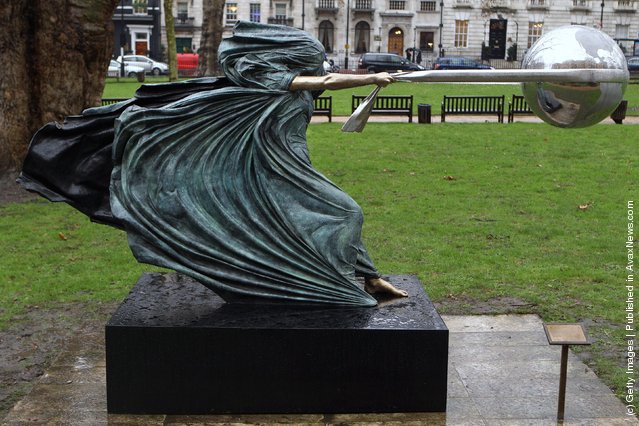 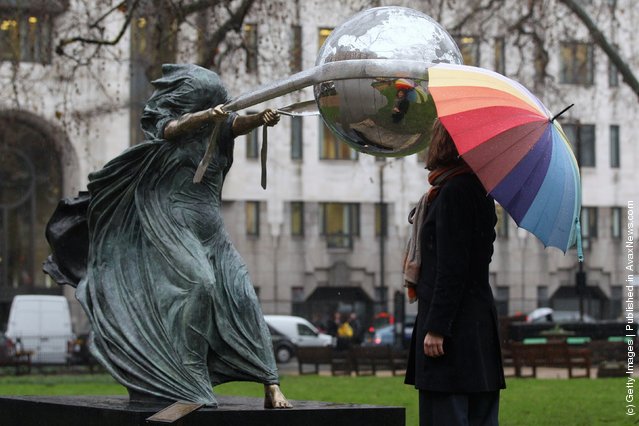 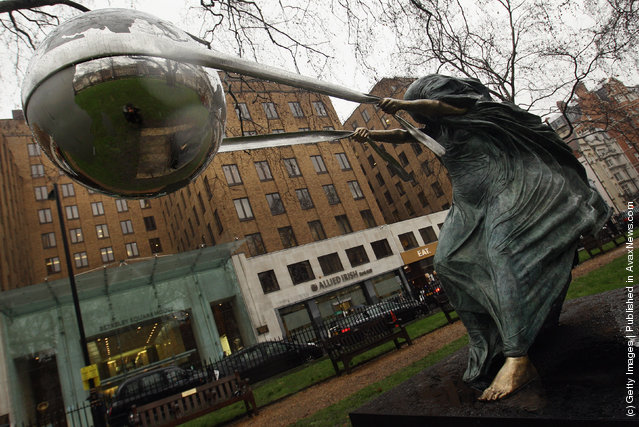 “The Force of Nature II” by contemporary sculptor Lorenzo Quinn is installed in Berkeley Square by Halcyon Gallery on February 10, 2011 in London, England. The sculpture is the final piece to be installed in the Halcyon Gallery's London Sculpture Trail comprising of six monumental sculptures on public display in central London. (Photo by Oli Scarff/Getty Images for Halcyon Gallery) 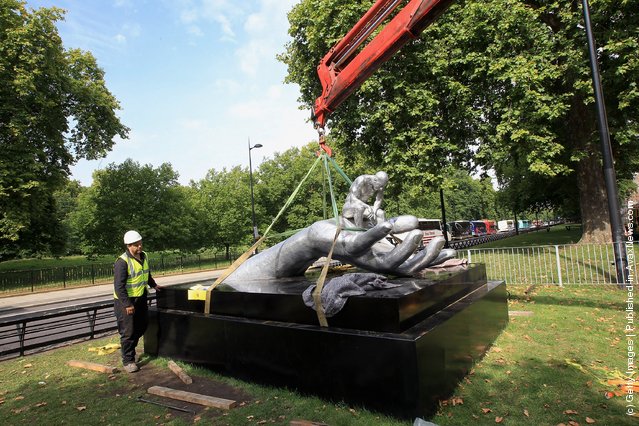 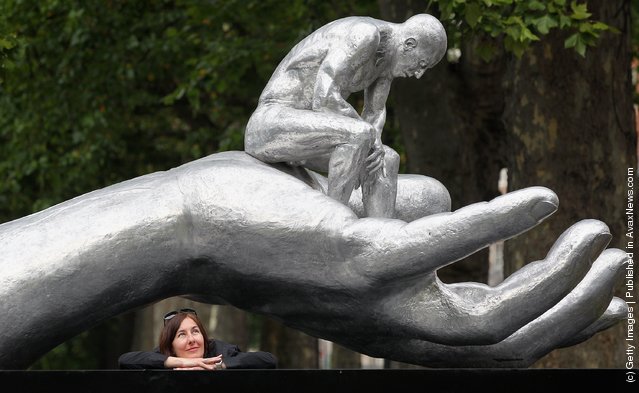 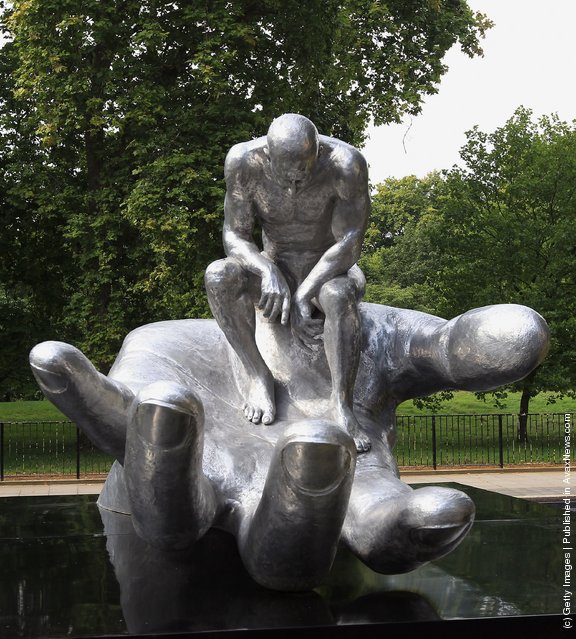