Educative Singapore Hindus Celebrate Thaipusam Festival
“Kavadi Attam (Tamil:காவடி ஆட்டம்) is a dance performed by the devotees during the ceremonial worship of Murugan, the Tamil God of War. It is often performed during the festival of Thaipusam and emphasizes debt bondage. The Kavadi itself is a physical burden through which the devotees implore for help from the God Murugan.

The kavadi itself is steeped in mythology. At Mount Kailas, Lord Shiva entrusted the dwarf saint sage Agastya with two hillocks, with instructions to carry and install them in South India. But the sage left them in a forest and later asked his disciple, Idumban to get them. Idumban found the two hillocks, but could not initially lift them, until he obtained divine help. Near Palani in South India – where to this day there is a famous shrine of Murugan – Idumban put the hillocks down to rest awhile. When he attempted to continue with his journey, he found that the hillocks were immovable.

Idumban sought the help of a scantily dressed youth, but the youth claimed the hillocks belonged to him. In the ensuing scuffle, Idumban was defeated. Idumban then realised that the youth was Lord Murugan. Idumban pleaded to be pardoned and asked that anyone who comes to the hills to worship Murugan with an object similar to the two hillocks suspended by a rod, may be granted his heart’s desire. Idumban’s wish was granted. And so the kavadi came to play its role in Hindu festivals.

The Kavadi consists of two semicircular pieces of wood or steel which are bent and attached to a cross structure that can be balanced on the shoulders of the devotee. It is often decorated with flowers, peacock feathers (the vehicle of God Murugan) among other things. Some of the Kavadis can weigh up to 30 kg.

The most spectacular practice is the vel kavadi, essentially a portable altar up to two meters tall, decorated with peacock feathers and attached to the devotee through 108 vels pierced into the skin on the chest and back. Fire walking and flagellation may also be practiced. It is claimed that devotees are able to enter a trance, feel no pain, do not bleed from their wounds and have no scars left behind.

However, some of the more extreme masochistic practices have been criticized as dangerous and contrary to the spirit and intention of Hinduism”. – Wikipedia

Photos: A devotee has his body pierced with hooks before taking part in the Thaipusam procession at Sri Srinivasa Perumal Temple on February 7, 2012 in Singapore. Thaipusam is a Hindu festival celebrated on the full moon in the Tamil month of Thai. Devotees pray and make vows, when the prayers are answered they fulfill the vows by piercing parts of their body such as their cheeks, tongues, and backs before carrying a “Kavadi” along a four kilometre route. (Photo by Chris McGrath/Getty Images) 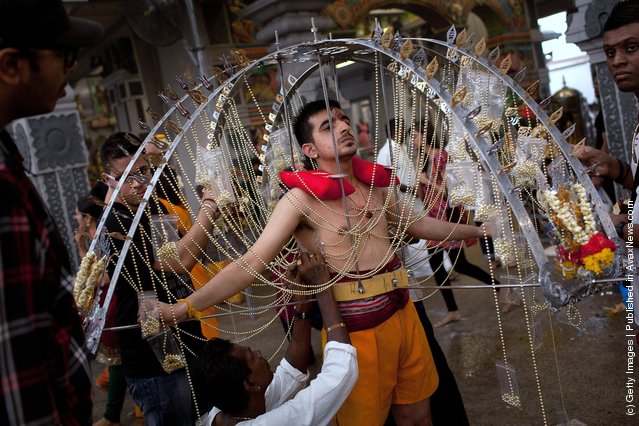 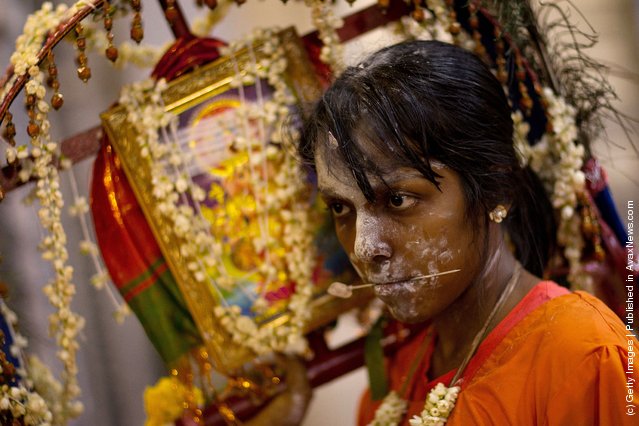 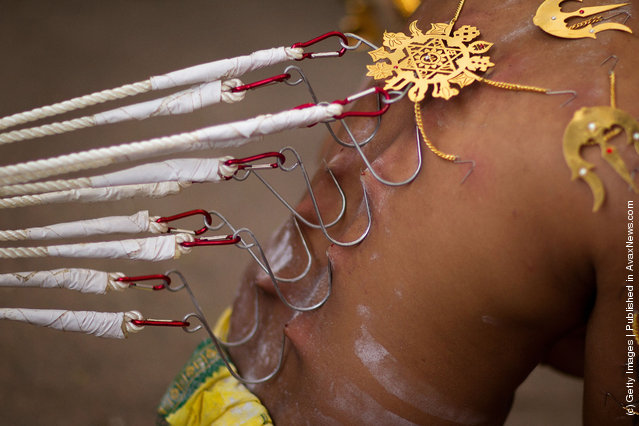 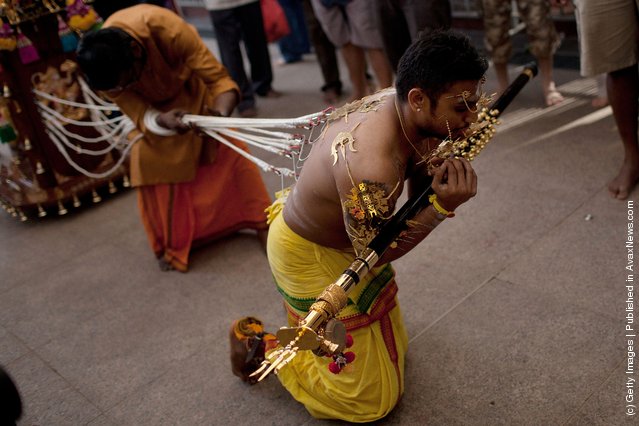 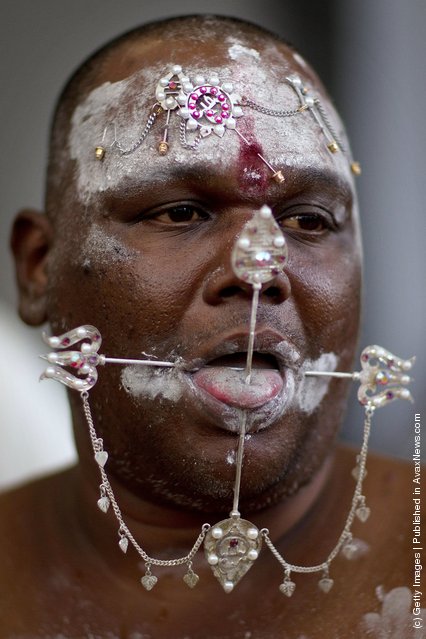 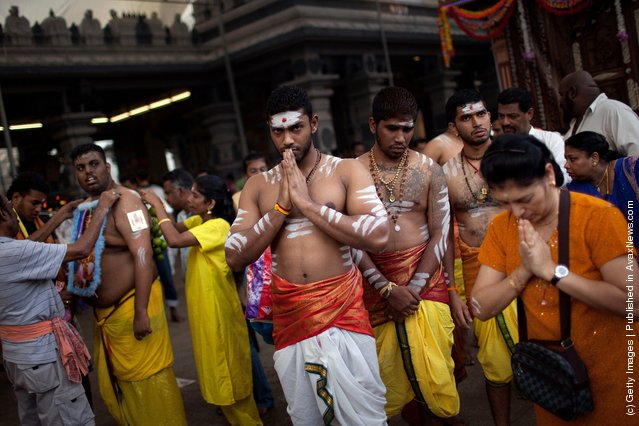 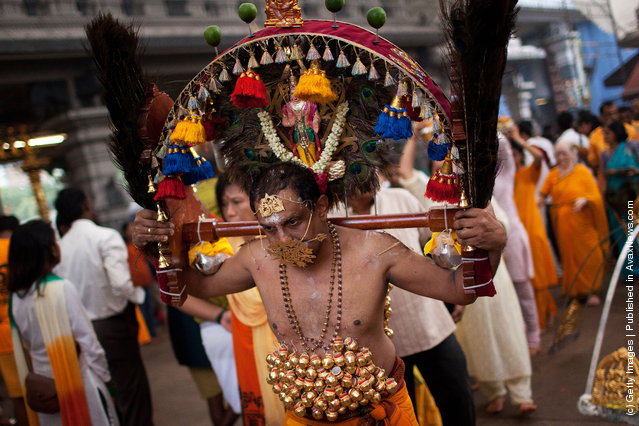 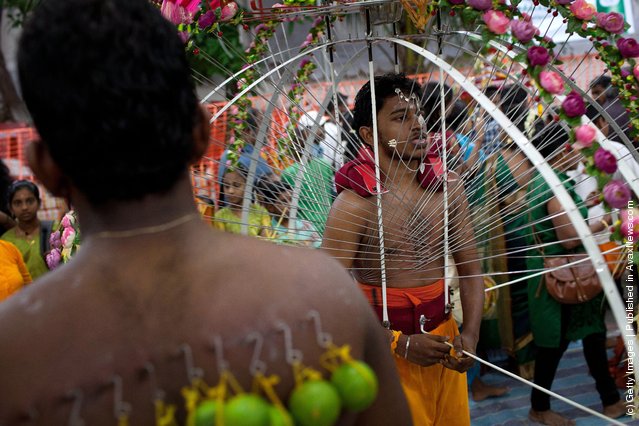 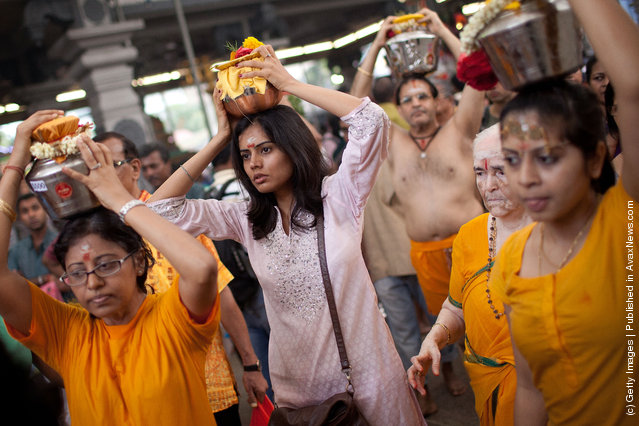 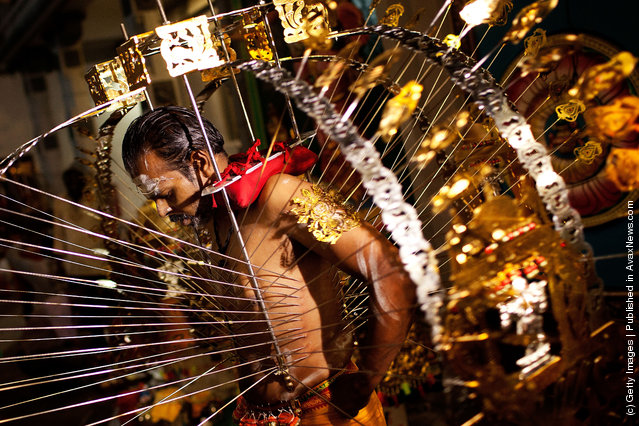 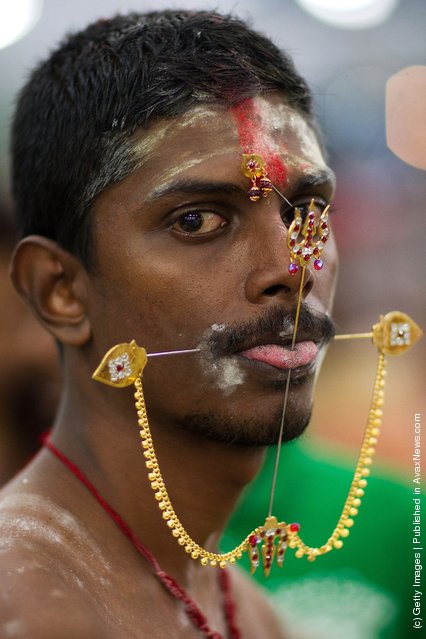 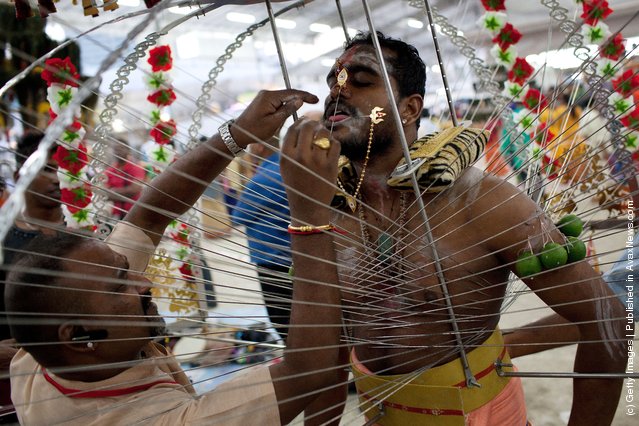 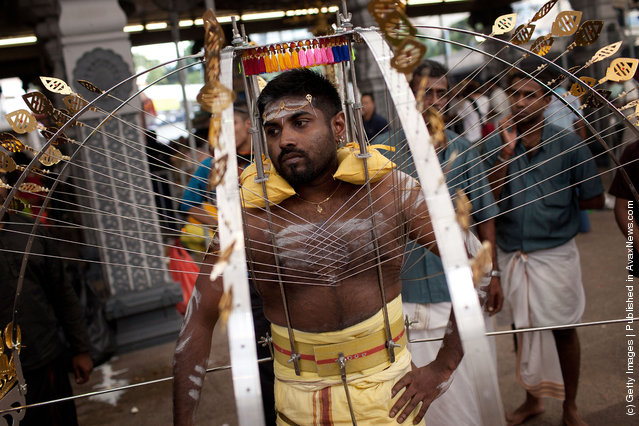 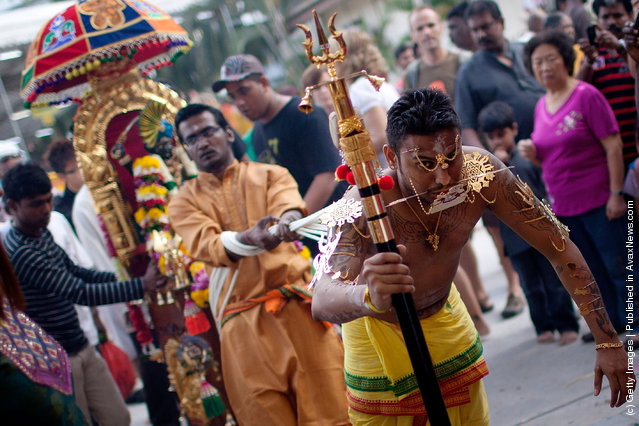