Educative South Koreans Crave Asia's Smelliest Fish
“You know when it's done by the smell”, said Kang Han-joo, co-owner of a seafood store in the bustling fish market of Mokpo, a port city on the southwestern tip of the Korean Peninsula, a region that's considered the food's spiritual home. As Kang spoke, he sliced small, stinking, glistening dark-pink fish steaks with a large knife and laid them in plastic foam boxes for shipment to customers around South Korea.

The smell of the fish, called hongeo in Korean and usually eaten uncooked, is unmistakable, unavoidable and a deal-breaker for many. A profound, pungent stink of ammonia radiates from the animal after it's been ripening for weeks. First-timers often squeeze their eyes shut as they chew. Tears stream down the cheeks. The throat constricts with the effort of swallowing.

Kang notes, in a dramatic understatement: “When it's fermented a long time, the smell becomes deeper”. Americans are still getting used to gentler fermented Asian foods – spicy Korean kimchi and Japanese miso, for example – yet many South Koreans claim a love, an addiction even, for this extreme form of fermentation. Restaurants specializing in the fish can be found throughout the country. One online hongeo appreciation society boasts more than 1,300 members.

Hongeo's history is murky, but it emerged in the days before refrigeration, when food that could keep for a long time without rotting was prized. Someone – maybe a fisherman on a long voyage or a clever, hungry or desperate farmer – discovered that skate didn't spoil as easily as other fish and a dish was born. Shop owners say the traditional method of making hongeo is to put the fish on a bed of hay in a clay pot, pile more hay on top and leave it.

Learning to love, or at least tolerate, what many consider the smelliest fish in Asia takes perseverance. Fans commonly say that if you try it four times, you'll be hooked. Nonfans may be mystified by how anyone could meet that threshold. “It's a freaking punch in the face”, said Joe McPherson, the founder of ZenKimchi, a Korean food blog, and an eventual devotee of the fish. “Like everyone else, I gagged the first time”.

Natives of the southwest say hongeo should be eaten plain. They sometimes complain that the copious garnishes provided at restaurants disguise the taste and smell. Most first-timers, however, tend to embrace all the extras they can, creating a hongeo “sandwhich” with garnishes that can include red pepper paste, salty mini shrimp, raw garlic, chili salt, slices of fatty boiled pork and some extraordinarily strong kimchi”. – Foster Klug via Associated Press 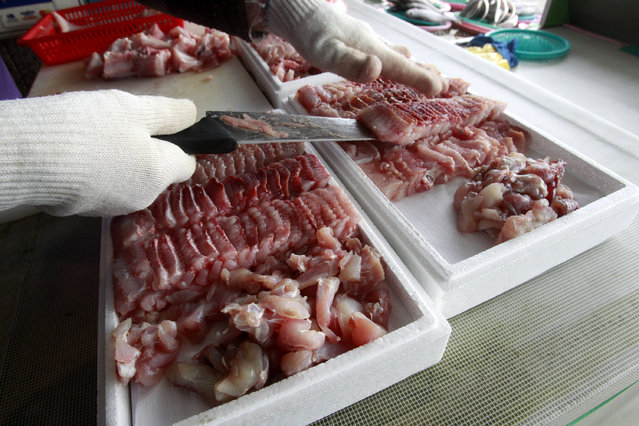 In this February 19, 2014 photo, a skate seller puts slices of skate into styrofoam boxes for shipment to customers around South Korea at a fish market in Mokpo, a port city on the southwestern tip of the Korean Peninsula. The aroma of one of southwestern South Korea's most popular delicacies regularly gets compared to rotting garbage and filthy bathrooms. And that's by fans. The unusual dish is typically made by taking dozens of fresh skate, a cartilage-rich fish that looks like a stingray, stacking them up in a walk-in refrigerator and waiting. Up to a month in some cases. (Photo by Ahn Young-joon/AP Photo) 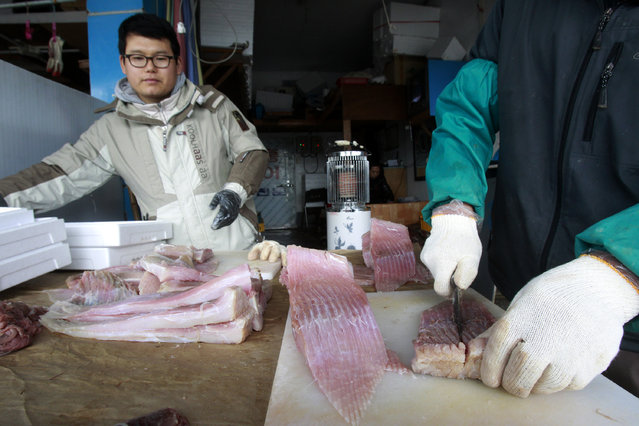 In this February 19, 2014 photo, a skate seller cuts a skate for shipment to customers around South Korea at a fish market in Mokpo, a port city on the southwestern tip of the Korean Peninsula. (Photo by Ahn Young-joon/AP Photo) 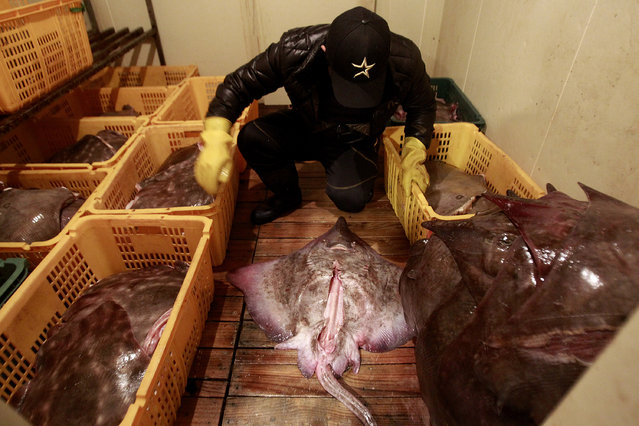 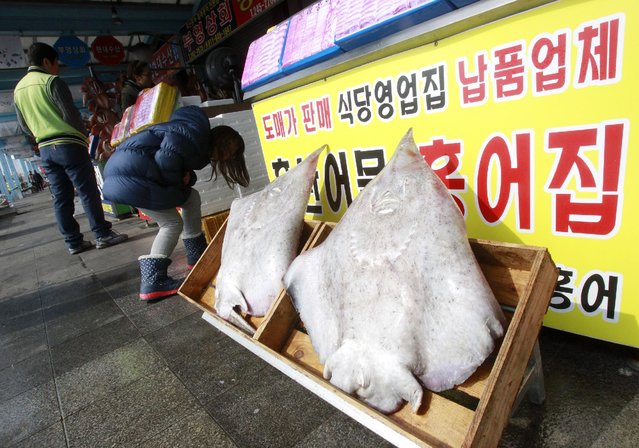 In this February 19, 2014, photo, skates are displayed at a fish market in Mokpo, South Korea. (Photo by Ahn Young-joon/AP Photo) 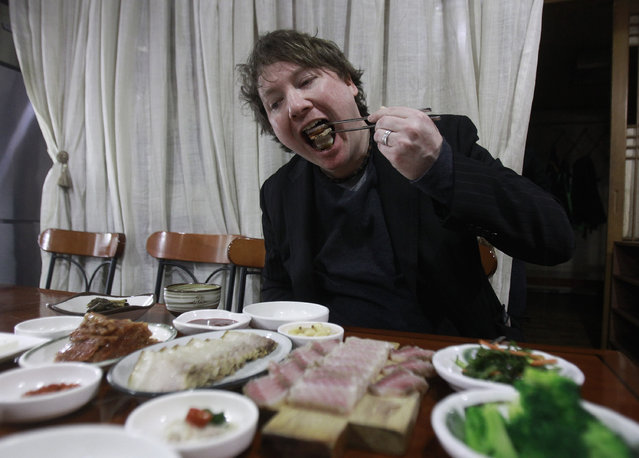