Educative The 88th Annual Chincoteague Pony Swim
“The Chincoteague Pony, also known as the Assateague horse, is a breed of pony that developed and lives in a feral condition on Assateague Island in the United States states of Virginia and Maryland. Several legends are told regarding the origins of the Chincoteague, with the most popular being that they descend from survivors of wrecked Spanish galleons off the Virginia coast. It is more likely that they descend from stock released on the island by 17th century colonists looking to escape livestock laws and taxes on the mainland.

In 1835 the first written description of “pony penning” appeared, though the practice of rounding up livestock on the island existed for many years before that. Initially, unclaimed animals were marked for ownership by groups of settlers. By 1885 the event had become a festival day, and two days of horse and sheep roundups were held on Assateague and Chincoteague Islands. While the sheep population diminished over time, the pony population grew. In 1909, the last Wednesday and Thursday of July were designated as the annual days for pony penning, still taking place on both Assateague and Chincoteague Islands. However, in the early 1920s, much of Assateague Island was purchased by a wealthy farmer, forcing many settlers to move to Chincoteague Island and necessitating a change in the pony penning format. By 1923, all parts of pony penning except for the actual roundup had moved to Chincoteague Island, with the ponies being transported by truck for the first two years before the annual swim was begun. By the early 1900s, Chincoteague Island had been established as a tourism and sport haven, and in 1922 a causeway was completed that connected the island to the Virginia mainland. After a pair of fires ravaged Chincoteague Island that same year, the Chincoteague Volunteer Fire Company was established. In 1924, the first official Pony Penning Day was held, where ponies were auctioned at $25–50 each to raise money for fire equipment. Pony Penning Day has been held annually ever since, with the exception of 1942 and 1943.

In the present day, up to 50,000 visitors gather on the last Wednesday in July to watch mounted riders bring the Virginia herd from Assateague and swim them across the channel to Chincoteague Island. The swim takes 5–10 minutes, with both the rider and the observers on hand to assist horses, especially foals, who may have a hard time with the crossing. Before the swim, the herd is evaluated and mares in the late stages of pregnancy and those with very young foals are removed from the herd to be trailered between the islands. During the swim, some lactating mares become affected with hypocalcemia, which is treated by on-site veterinarians. Larger foals are auctioned the next day and the majority of the herd, including any young foals, are returned to Assateague on Friday. As of 2009, the highest price paid for a pony was $11,700, while the average price was around $1,300. Some ponies are purchased under “buy back” conditions, where the bidder donates the money to the fire department but allows the pony to be released back onto Assateague Island”. – Wikipedia 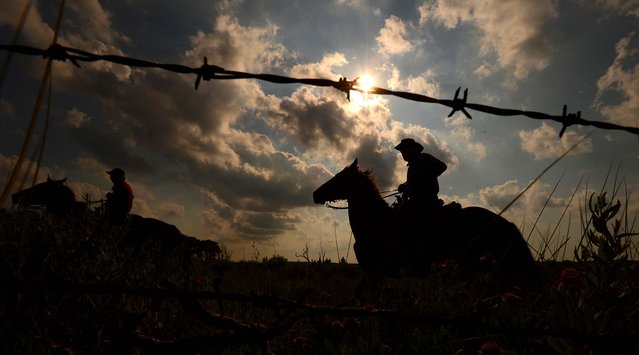 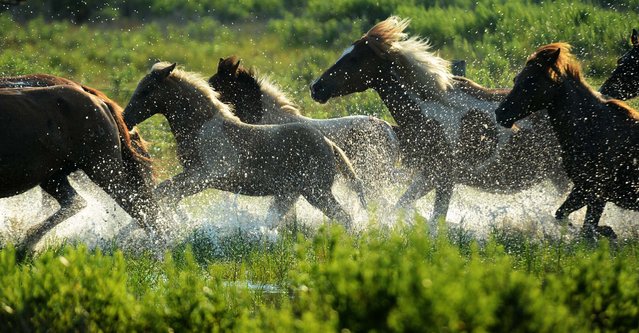 Chincoteague Ponies are driven to their holding pen during the South Herd Roundup on Assateague Island. (Photo by Jay Diem/Eastern Shore News) 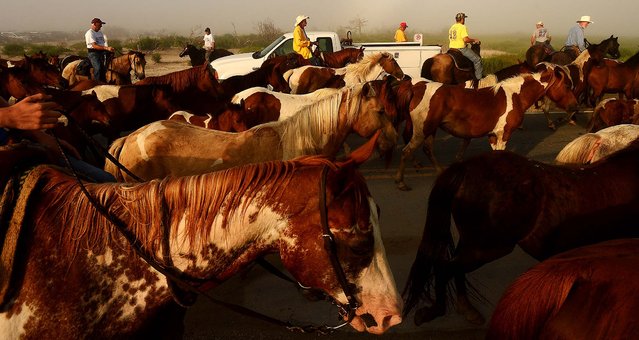 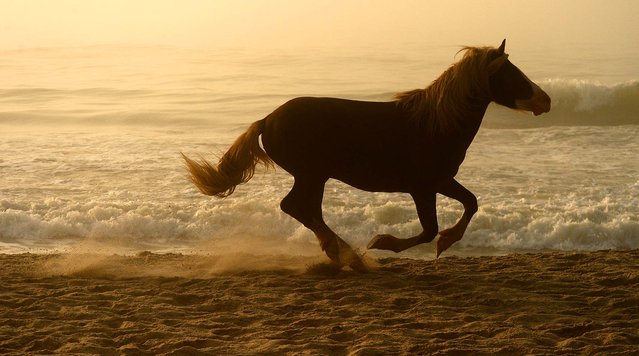 A Chincoteague pony breaks away from its herd along the beach at Assateague Island on Monday. (Photo by Jay Diem/Eastern Shore News) 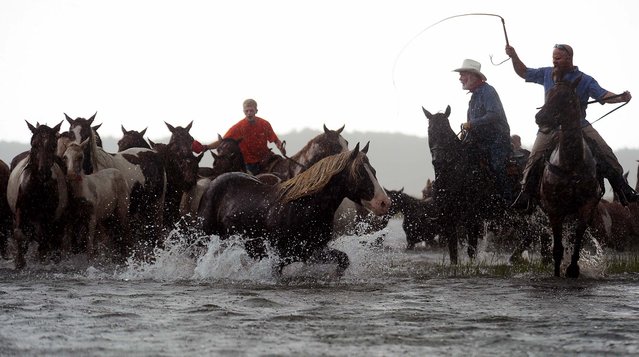 Saltwater Cowboys drive the Chincoteague Pony herd into Assateague Channel in a heavy downpour on Wednesday A portion of the herd will be auctioned on Thursday. (Photo by Jay Diem/Eastern Shore News) 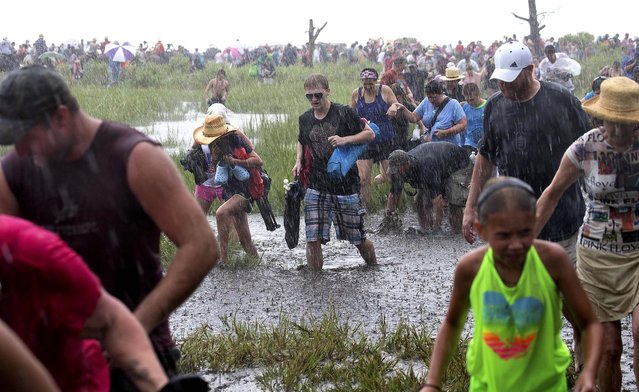 People walk back to solid ground as rain pours down at the annual Chincoteague Pony Swim, on Chincoteague Island. (Photo by Doug Mills/The New York Times) 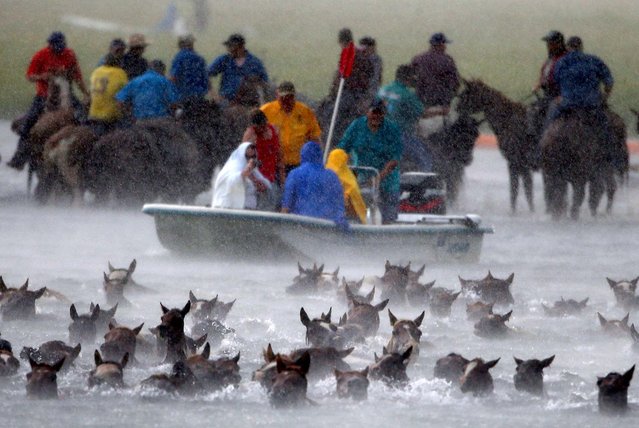 Wild ponies are herded into the Assateague Channel during the rain storm for their annual swim from Assateague Island to Chincoteague, Virginia. (Photo by Mark Wilson/Getty Images) 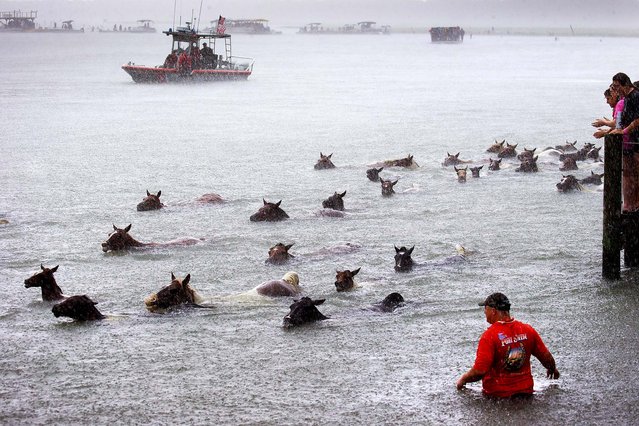 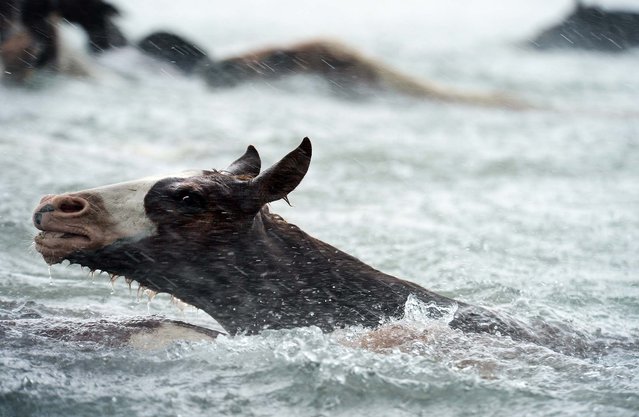 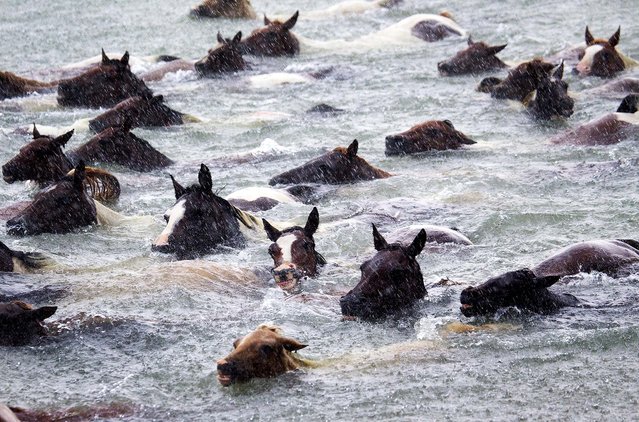 During a storm with heavy rain, wild ponies swim towards the shore in the annual Chincoteague Pony Swim. (Photo by Jay Diem/Eastern Shore News) 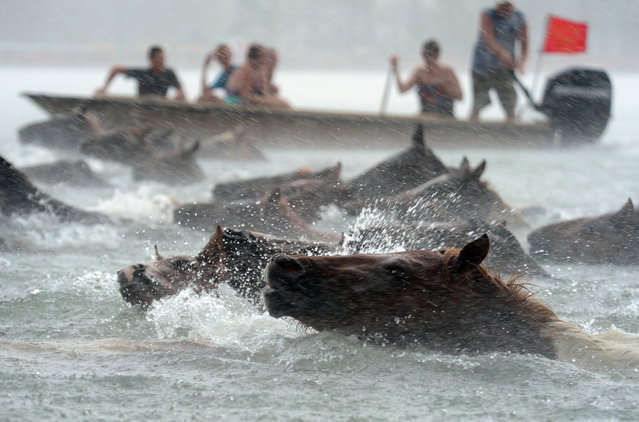