Educative The Biggest, Most Long-lasting Saturnian Storm
An incredible view of daytime lightning on Saturn during one of the biggest storms the ringed planet has ever seen has been captured by a NASA spacecraft. The new images unveiled by NASA – which it said came as a big surprise – came after its Cassini orbiter captured the lightning storm while orbiting the planet. The bright blue spots on the picture below of the enormous storm, which broke out on the planet last year, shows the powerful lightning. 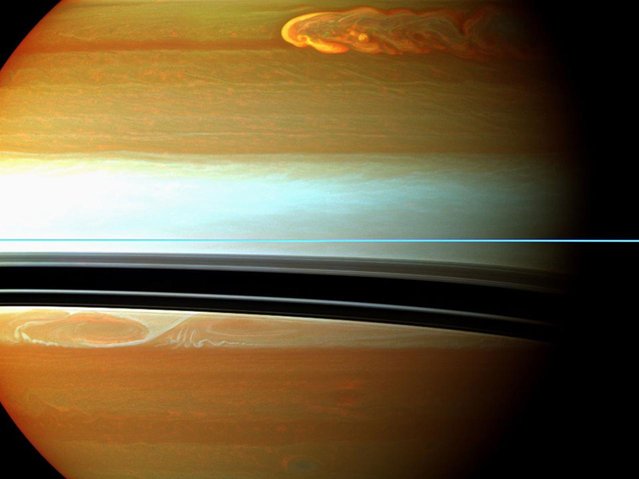 The huge storm which generated the lightning strike on Saturn can be seen in the top right of this image. (Photo by NASA)

An incredible view of daytime lightning on Saturn during one of the biggest storms the ringed planet has ever seen has been captured by a NASA spacecraft. The bright blue spot on this picture shows a powerful lightning strike. (Photo by NASA) 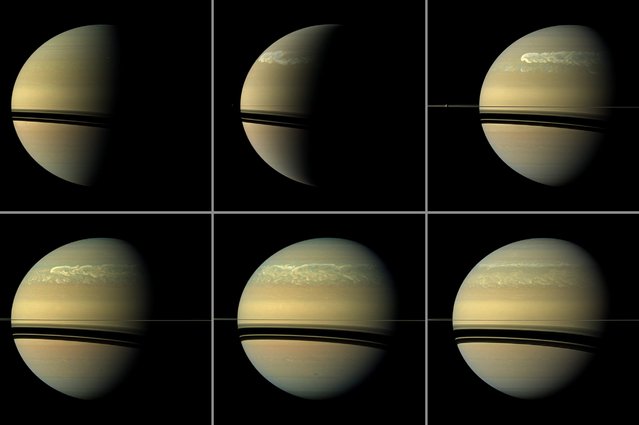 This series of images from NASA's Cassini spacecraft shows the development of the largest storm seen on the planet since 1990. These true-color and composite near-true-color views chronicle the storm from its start in late 2010 through mid-2011, showing how the distinct head of the storm quickly grew large but eventually became engulfed by the storm's tail.

The earliest image of the storm, taken Dec. 5, 2010, is in the top left of the panel. The storm appears only as a small, white cloud on the terminator between the day side and night side of the planet.

The next view, in the top middle of the panel and taken Jan. 2, 2011, shows that the head quickly grew much larger and a tail began to trail a great distance eastward. Some of the clouds moved south and got caught up in a current that flows to the east (to the right) relative to the storm head. In the top right of the panel, this tail, which appears as slightly blue clouds south and now west (left) of the storm head, can be seen encountering the storm in the Feb. 25 image.

The April 22 image, in the bottom left of the panel, is one of Cassini's last views of the storm when it still had a recognizable head. In this view, the tail is south of the head and is well established by this time.

The May 18 view, in the bottom middle, shows only the storm's tail. The head still existed at this time, but it is beyond the horizon and out of the field of view here. (Photo by NASA) 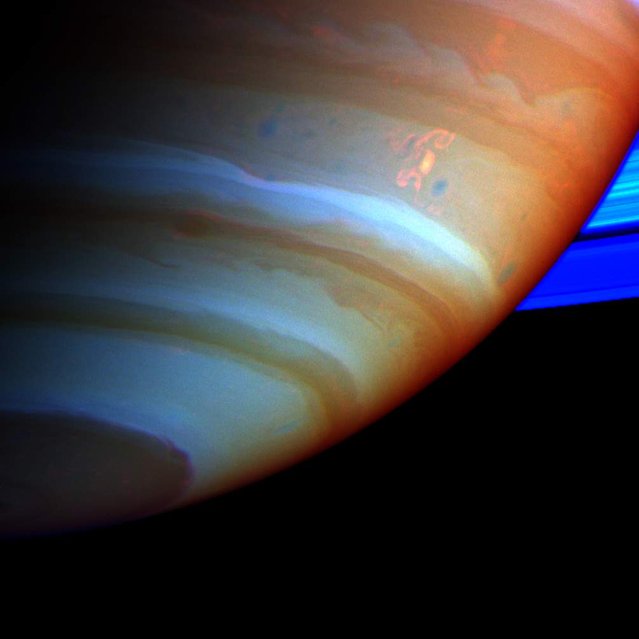 A large, bright and complex convective storm that appeared in Saturn's southern hemisphere in mid-September 2004 was the key in solving a long-standing mystery about the ringed planet.

Saturn's atmosphere and its rings are shown here in a false color composite made from Cassini images taken in near infrared light through filters that sense different amounts of methane gas. Portions of the atmosphere with a large abundance of methane above the clouds are red, indicating clouds that are deep in the atmosphere. Grey indicates high clouds, and brown indicates clouds at intermediate altitudes. The rings are bright blue because there is no methane gas between the ring particles and the camera.

The complex feature with arms and secondary extensions just above and to the right of center is called the Dragon Storm. It lies in a region of the southern hemisphere referred to as “storm alley” by imaging scientists because of the high level of storm activity observed there by Cassini in the last year. (Photo by NASA) 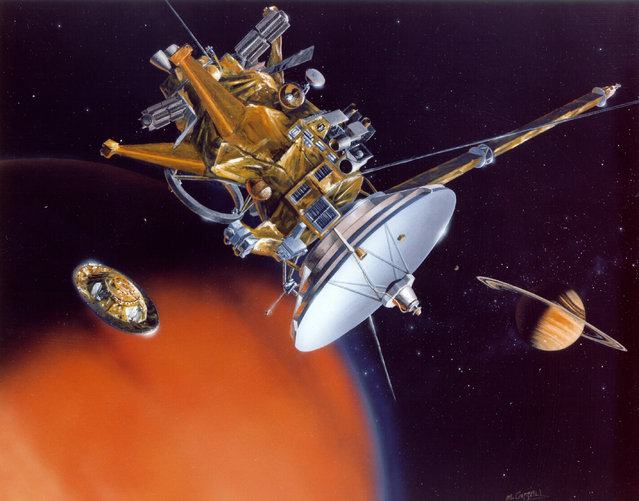 An artist's view of Cassini releasing the Huygens Probe at Saturn's moon Titan.

The energy from the visible flashes of lightning could have spiked about 3 billion watts over a second – equal to some of the strongest and most powerful lightning flashes recorded on Earth.

Scientists said the lightning was recorded across an area 100 miles wide. The spacecraft spotted a total of eight lightning flashes.

The storm which resulted in the powerful lightning strike is the longest-lived storm ever recorded on the planet, beginning in December 2010 and lasting for an incredible 200 days. It ended in late June last year.

At its peak, it wrapped completely around the planet. The Cassini spacecraft was launched by NASA in 1997 and since 2006 has been orbiting Saturn. Its latest mission is expected to last until 2017.

Cassini project scientist Linda Spilker said: “Saturn's atmosphere has been changing over the eight years Cassini has been at Saturn, and we can't wait to see what happens next”.
Edit Del
22 Jul 2012 08:43:00, post received 0 comments
Publication archive:
←   →
Popular tags:
All tags
Last searches: