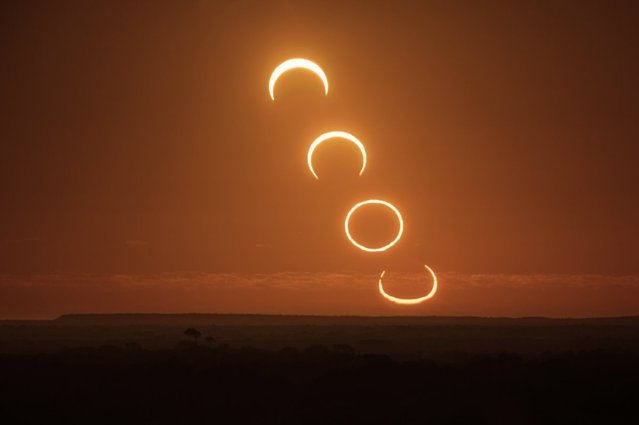 "The Moon's orbit about the Earth is not perfectly circular, so that at different times the Moon can be slightly closer or further away than usual. If the Moon passes in front of the Sun when it is at its furthest point, it will appear to be too small to entirely cover the solar disc. This is an 'annular eclipse' in which a ring, or annulus, of the Sun remains visible. This composite shot shows the progress of an annular eclipse in May 2013. Close to the horizon the distorting effects of Earth's atmosphere can also be seen." 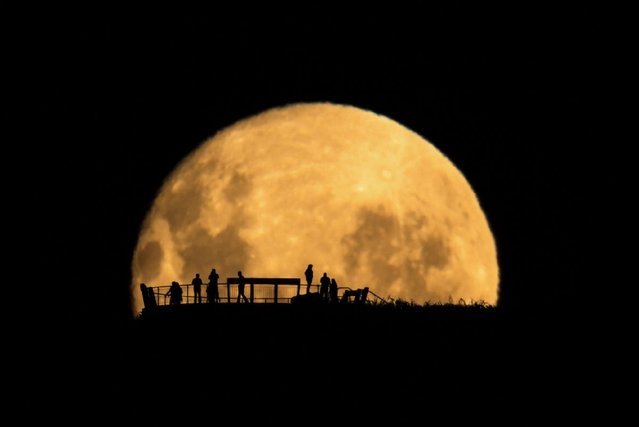 "This is a deceptively simple shot of figures silhouetted against a rising Moon. By photographing the people on the observation deck from a great distance, the photographer has emphasized their tiny scale compared to the grandeur of our natural satellite. Close to the horizon, Earth's turbulent atmosphere blurs and softens the Moon's outline and filters its normal cool grey tones into a warmer, yellow glow." 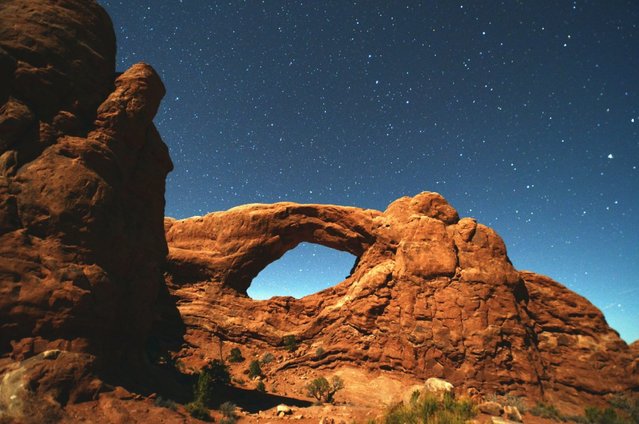 "By keeping the camera shutter open this young photographer gathers precious light, making the desert scenery seem as bright as day. But the stars in the blue sky give the game away, showing that this dramatic photograph was actually taken in the middle of the night."

"The awesome scale presented in this image depicts what as far as we're concerned, are the three most significant objects in the Universe. The Sun and Moon each play an important role to us on Earth, and both are seen here, reddened by our vital atmosphere, presiding over the horizon. The third object is the Earth itself, and here its land, sea and sky meet around an amazing human megastructure, San Francisco's Golden Gate Bridge." 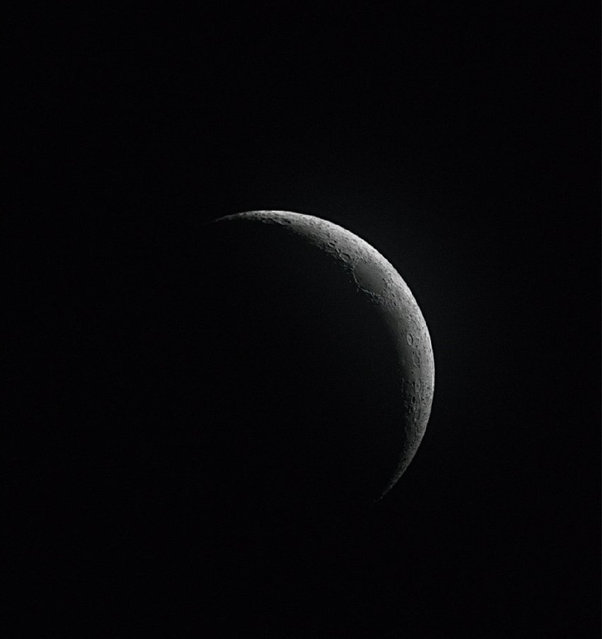 "The Moon seems to be emerging from the interplanetary darkness, and the young photographer has captured the contrast been the dark lava-filled lunar 'seas' and the mountainous southern highlands." 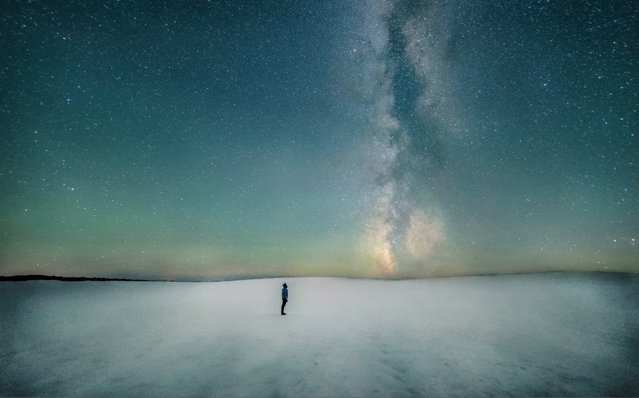 "Appearing like a column of smoke rising from the horizon, a dark lane of dust marks the plane of the Milky Way in this photograph. This dust plays a vital role in the life story of our galaxy. Formed from the ashes of dead and dying stars, the dust clouds are also the regions in which new stars will form." 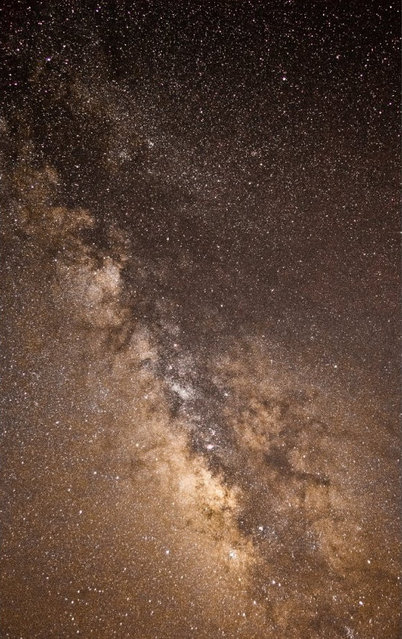 "This young astrophotographer has focused on one of the most spectacular vistas looking towards the very centre of the galaxy, capturing the glow of tens of billions of stars painting streaks of light across the sky. Dark lanes of interstellar dust and gas are seen in silhouette against the brilliance of the Milky Way's dense bulge, while myriad clusters and star nurseries are sprinkled across the scene." 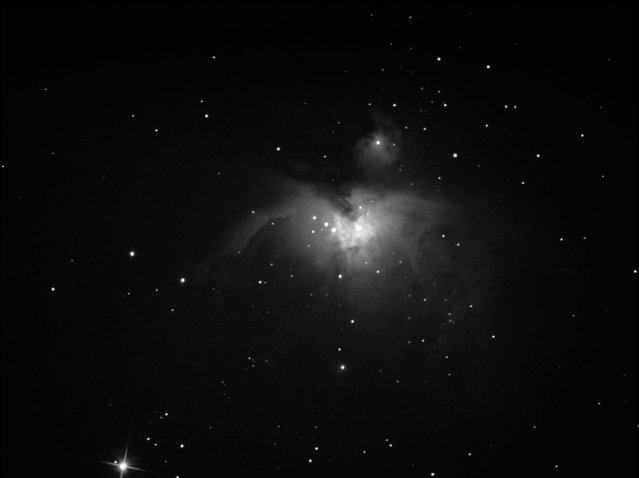 "The Great Nebula, also referred to as The Orion Nebula and M42 is found in the well-known constellation of Orion, just below the hunter's belt. To the naked eye the nebula looks like another star in Orion's sword. However, this skillful young photographer has shown there is more to it than meets the eye by producing this beautiful image that not only shows the stunning formation of this popularly observed nebula but also it diffuse nature."

"For those lucky enough to see it, the transit of Venus was one of the astronomical highlights of 2012. As the Planet took just six hours to cross the face of the Sun, cloudy weather was a potential disaster for observers — the next transit will not take place until 2117. Here, the final moments of the transit are revealed by a chance gap in the clouds, allowing the photographer to capture the picture of a lifetime. Extreme care should always be taken when photographing the Sun as its heat and light can easily cause blindness and damage digital cameras. Specialist solar filters are available to allow photography and observations to be carried out safely." 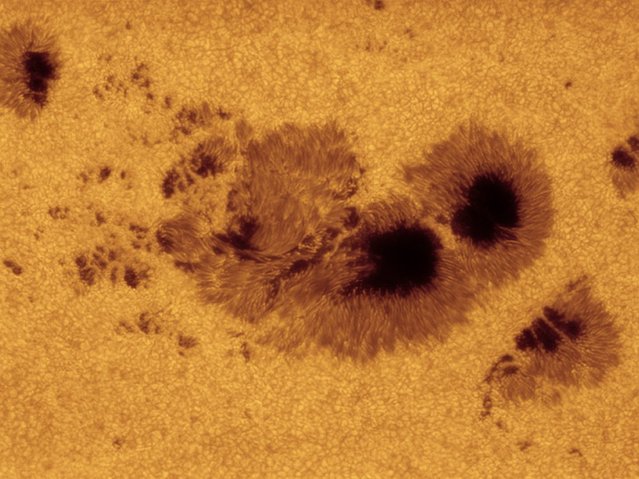 "The darkest patches or 'umbrae' in this image are each about the size of Earth, with the entire region of magnetic turmoil spanning the diameter of ten Earths. This image captures rich details directly around the sunspots, and further out in the so-called 'quiet' Sun where simmering hot plasma rises, cools and falls back. This produces a patchwork surface like a pot of boiling water, but on an epic scale — each bubbling granule is about the size of France." 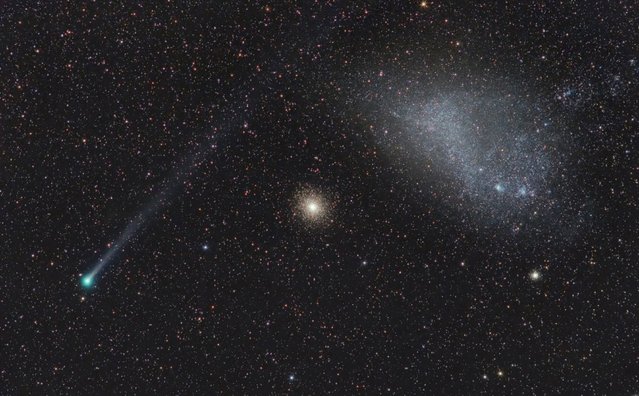 "At a glance, this image may seem like a post-processed montage of objects from three separate images. However the truth is that they were all captured together providing the viewer with an amazing view of the Solar System, galaxy and Universe. Comet Lemmon only comes into our neighborhood every 11,000 years, racing around our Sun and back out to the far reaches of the Solar System. The light from the globular cluster in the centre of this image took a journey of over 16,000 years to reach Earth. The furthest object in the image is a dwarf galaxy called the Small Magellanic Cloud whose starlight takes 200,000 years to reach us." 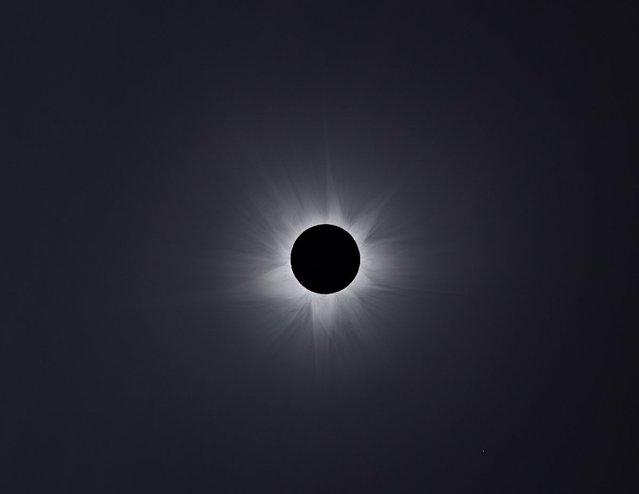 "This image is a demonstration of both precision timing and rigorous post-processing. It gives the viewer a window onto the elusive outer atmosphere of the Sun — the corona. A natural dimming of the Sun's blinding brightness, courtesy of the Moon, reveals the ghostly glow of gas that has a temperature of one million degrees Celsius. For centuries total solar eclipses were the only way to study this hidden treasure of the Sun. By photographing this event, the breathtaking experience of viewing a total solar eclipse is captured indefinitely."