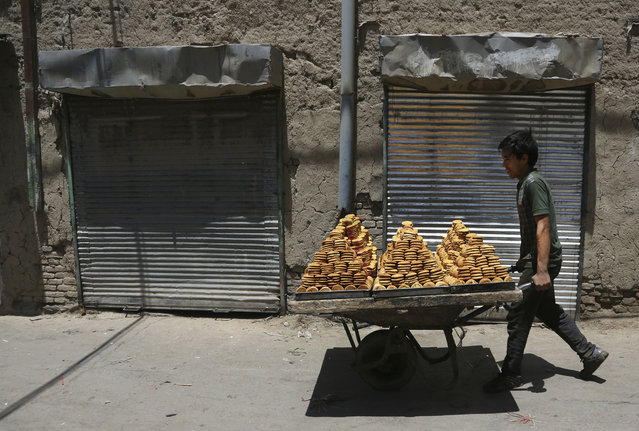 An Afghan young boy carries traditional sweets with a hand cart at a market to be displayed for sale for the upcoming Eid al-Fitr holiday to mark the end of the holy fasting month of Ramadan, in the old part of Kabul, Afghanistan, Wednesday, June 13, 2018. (Photo by Rahmat Gul/AP Photo) 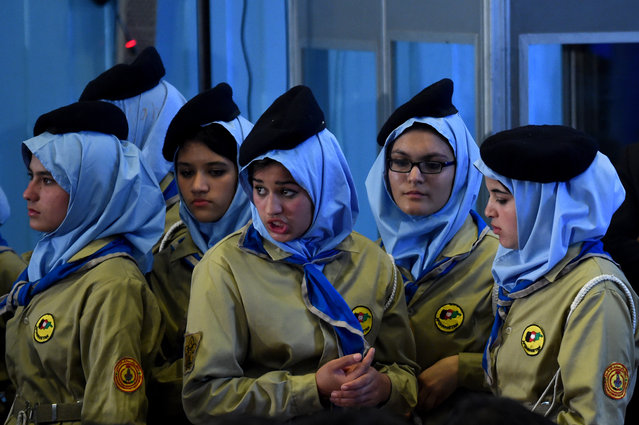 Afghan students look on during a ceremony attended by Afghan President Ashraf Ghani marking the start of the new school year at Amani High School in Kabul on March 19, 2015. President Ghani said deprivation of children from school and closure of schools are enmity against Islam and Afghanistan. Over 8 million Afghans are going to schools, and 42 percent of them are girls, a great achievement for Afghan girls as they were banned during the Taliban regime before 2001. (Photo by Wakil Kohsar/AFP Photo) 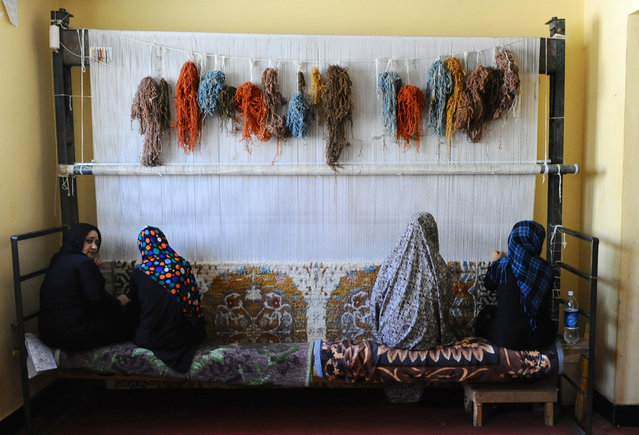 In this photograph taken on August 27, 2014 female Afghan prisoners weave a carpet in the female prison in Herat. The facility, which was built by the Italian Provincial Reconstruction Team, holds approximately 140 inmates, some with their children alongside them, whose crimes range from murder, drug trafficking to running away from home. The prison programme includes teaching inmates skills, such as carpet weaving, that will help them survive when they are released. (Photo by Aref Karimi/AFP Photo) 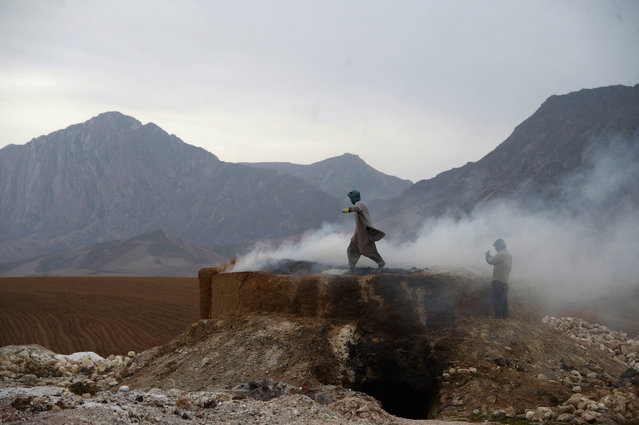 In this photograph taken on March 12, 2017, Afghan laborers work in a chalk factory on the outskirts of Mazar-i-Sharif. (Photo by Farshad Usyan/AFP Photo) 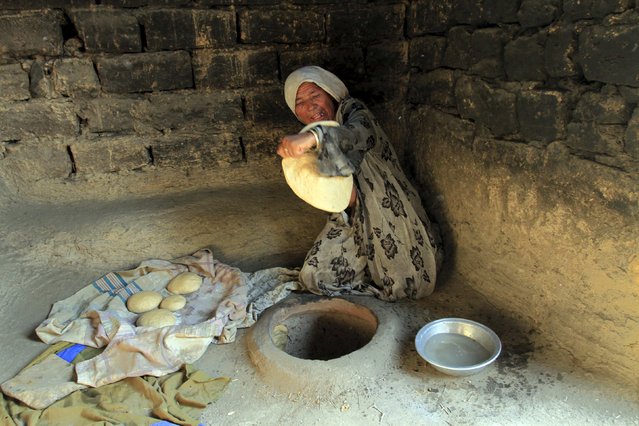 An Afghan woman bakes bread in her oven at their house outside Jalalabad, Afghanistan September 16, 2015. (Photo by Reuters/Parwiz) 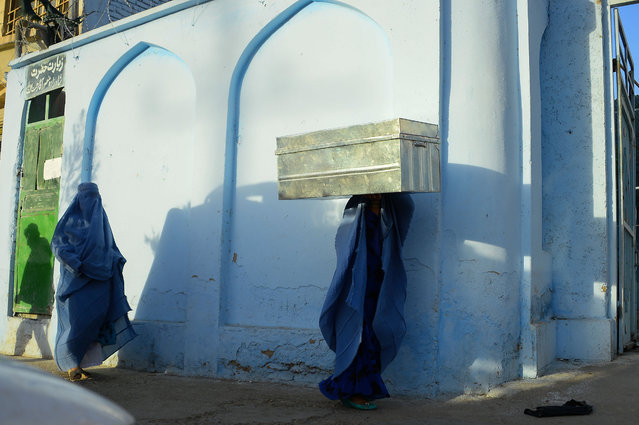 In this photograph taken on June 26, 2018, a Afghan burqa-clad woman carries a box on her head along a road in Herat. (Photo by Hoshang Hashimi/AFP Photo) 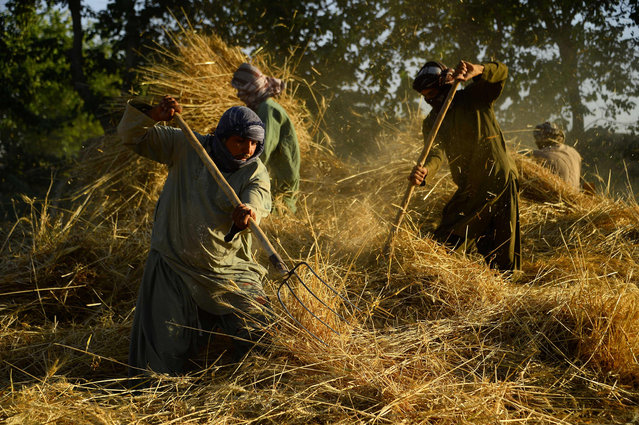 In this photo taken on July 1, 2018, Afghan farmers harvest fresh wheat in a field at Enjil District in Herat province. (Photo by Hoshang Hashimi/AFP Photo) 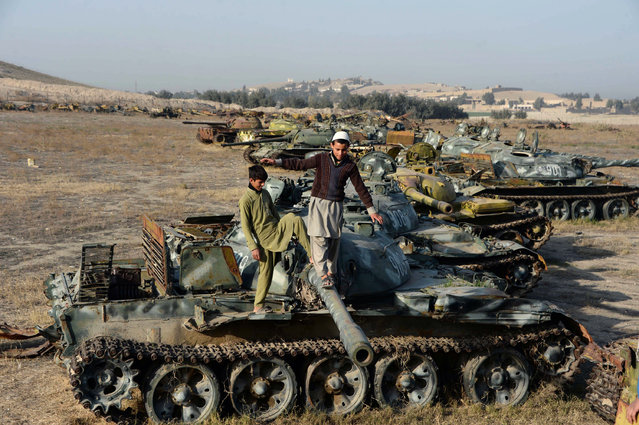 Afghan children play on the remains of a Soviet-era armored personnel carrier on the outskirts of Jalalabad on February 15, 2016. Soviet troops withdrew from Afghanistan on February 15, 1989, after ten years of fighting against Mujahidin militiamen. (Photo by Noorullah Shirzada/AFP Photo) 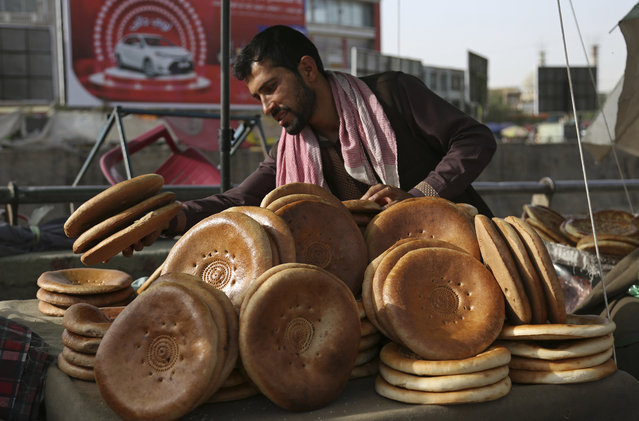 An Afghan street vendor sells bread before the Iftar meal that breaks the fast during the Muslim holy month of Ramadan, in Kabul, Afghanistan, Tuesday, June 5, 2018. Ramadan is marked by daily fasting from dawn to sunset and an increase of good deeds and charity. (Photo by Rahmat Gul/AP Photo) 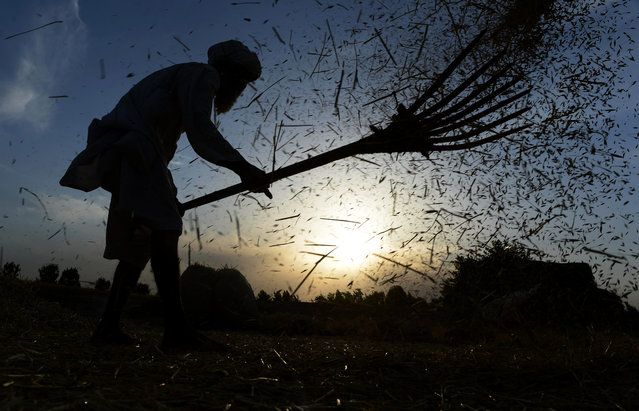 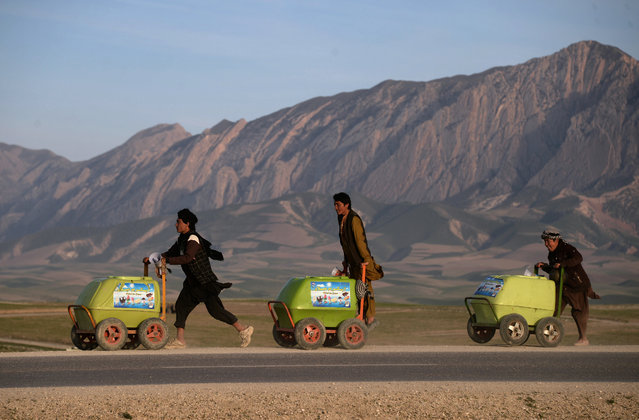 In this photograph taken on March 22, 2015, young Afghan vendors push their ice-cream carts along a road on the outskirts of Mazari-i-Sharif. (Photo by Farshad Usyan/AFP Photo) 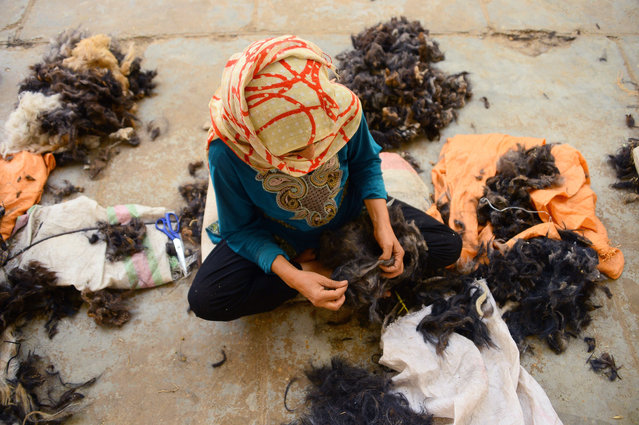 An Afghan woman works in a traditional wool factory in Herat, Afghanistan on July 5, 2018. The goat wool is destined for export to China. (Photo by Hoshang Hashimi/AFP Photo) 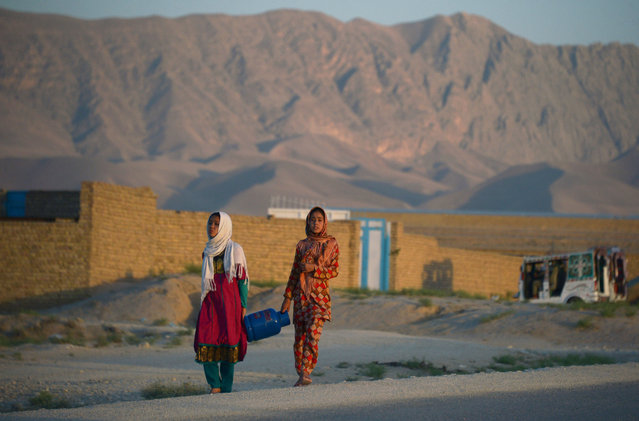 In this photograph taken on June 26, 2018, Afghan girls carry a gas cannister on the outskirts of Mazar-i-Sharif. (Photo by Farshad Usyan/AFP Photo) 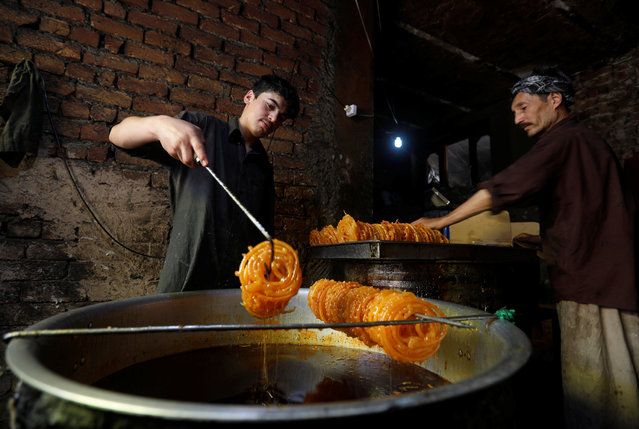 Afghan men make sweets at a small traditional factory in preparation for Eid al-Fitr, during the Muslim holy fasting month of Ramadan in Kabul, Afghanistan June 13, 2018. (Photo by Omar Sobhani/Reuters) 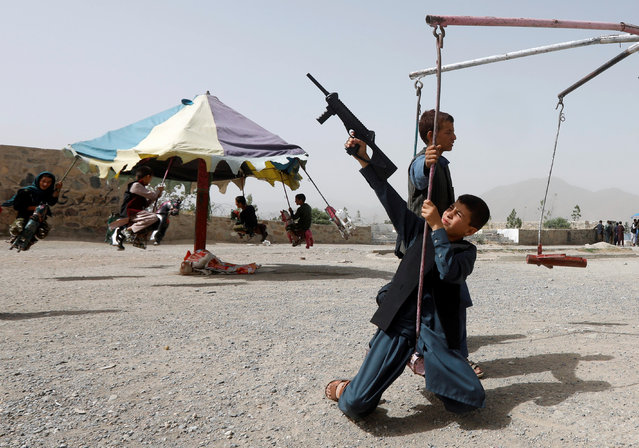 Afghan children ride the swing ride during the first day of the Muslim holiday of Eid al-Fitr in Kabul, Afghanistan June 15, 2018. (Photo by Omar Sobhani/Reuters) 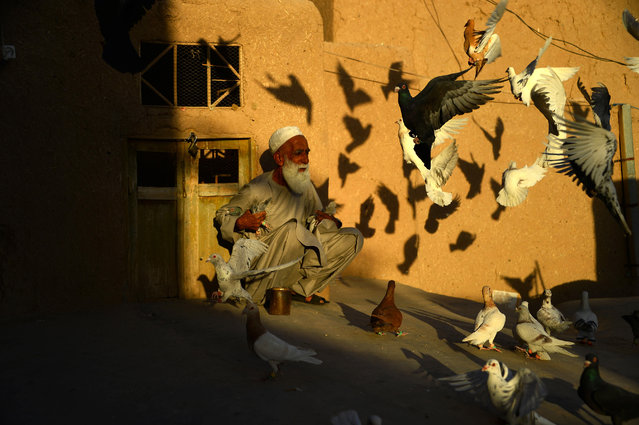 In this photo taken on June 30, 2018, an Afghan pigeon fancier Abdul Ghani, 70, sits as he feeds his pigeons flying from the rooftop of his home in Herat province. (Photo by Hoshang Hashimi/AFP Photo) 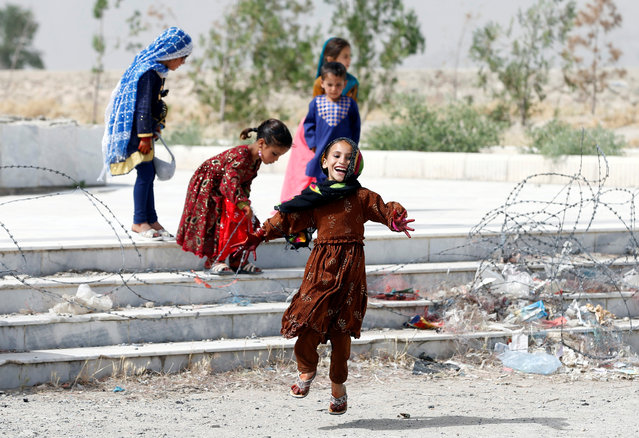 Afghan girls play on the first day of the Muslim holiday of Eid al-Fitr in Kabul, Afghanistan June 15, 2018. (Photo by Omar Sobhani/Reuters) 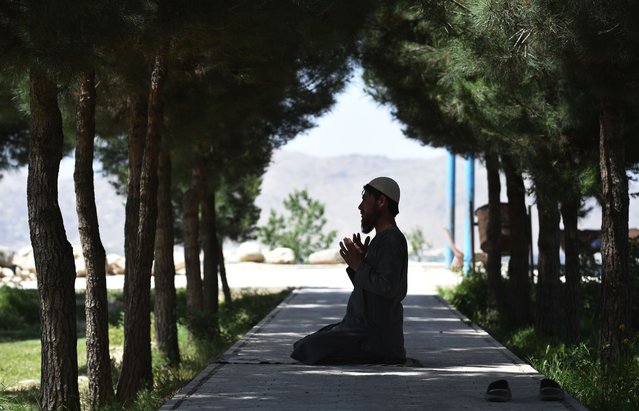 An Afghan Muslim man prays during the holy month of Ramadan at the Wazir Akbar Khan hilltop in Kabul on May 30, 2018. Muslims throughout the world are marking the month of Ramadan, the holiest month in the Islamic calendar during which Muslims fast from dawn until dusk. (Photo by Wakil Kohsar/AFP Photo) 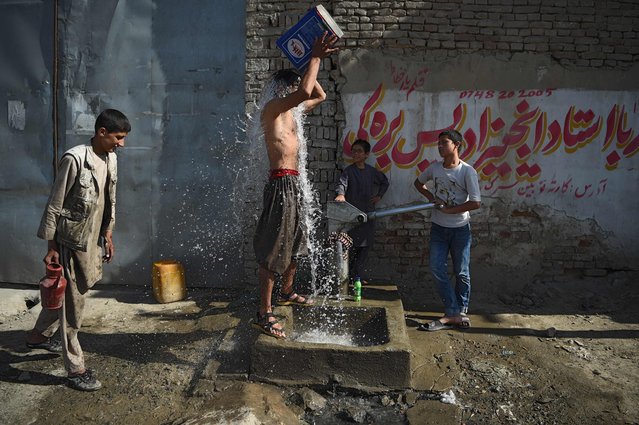 An Afghan youth cools off as he takes a shower next to a hand pump along the roadside in Kabul on June 13, 2018. (Photo by Wakil Kohsar/AFP Photo) 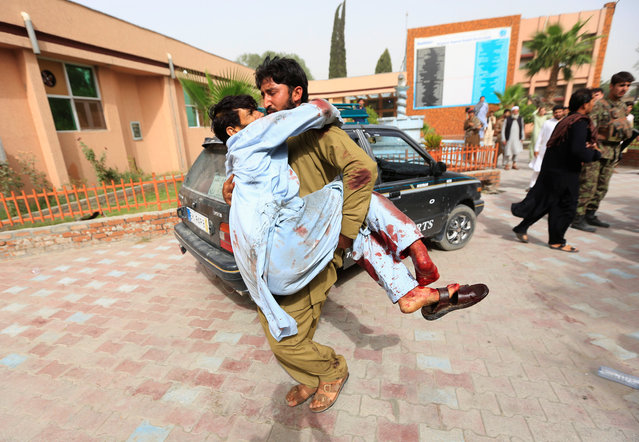 An injured man is carried to a hospital after a car bomb in Jalalabad city, Afghanistan June 17, 2018. (Photo by Reuters/Parwiz) 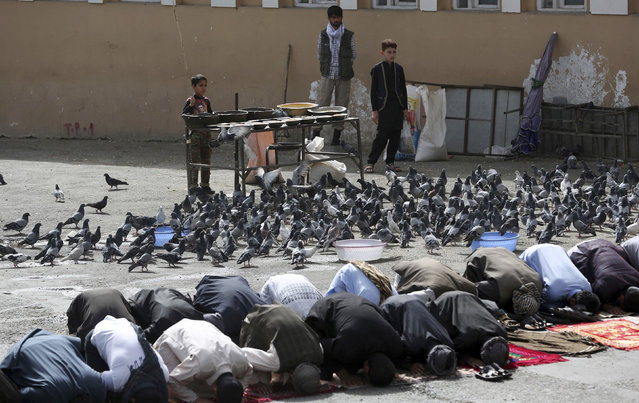