Afghan boy dyes threads to be used in weaving carpets at a carpet factory in Kabul, Afghanistan, 18 November 2014. Skilled Afghani laborers make the hand-woven rugs, using different natural dyes to produce their famous rich colors. The rugs are woven in many patterns and colors and are demanded all over the world. (Photo by Hedayatullah Amid/EPA) 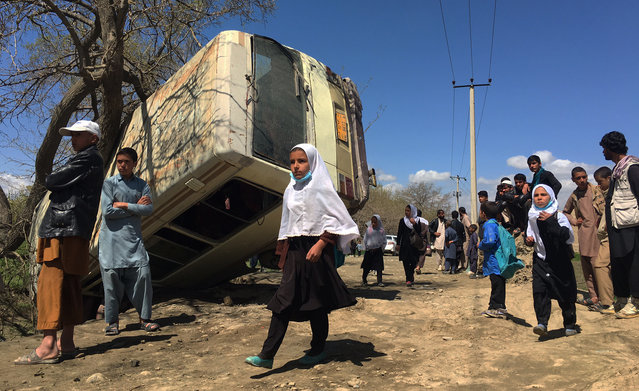 School children pass by a bus that was transporting education ministry officers to work as it was hit by a road side bomb on the outskirts of Kabul, Afghanistan, 11 April 2016. At least one employee of the Afghan Ministry of Education was killed and seven others injured in a blast in Kabul on 11 April 2016. (Photo by Jawad Jalali/EPA) 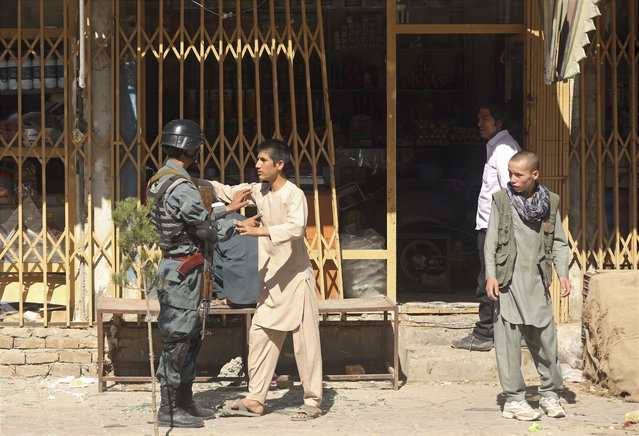 A policeman forbids a teenager to get closer to the site of a deadly suicide attack in Kabul, Afghanistan, Monday, July 24, 2017. A suicide car bomb killed over 20 people and injured many others early Monday morning in a western neighborhood of Afghanistan's capital where several prominent politicians reside. (Photo by Massoud Hossaini/AP Photos) 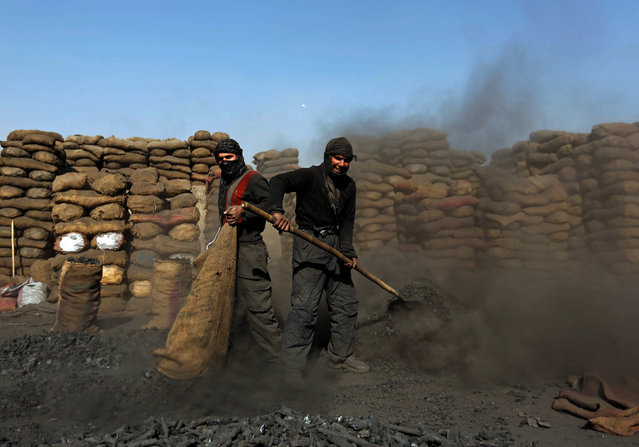 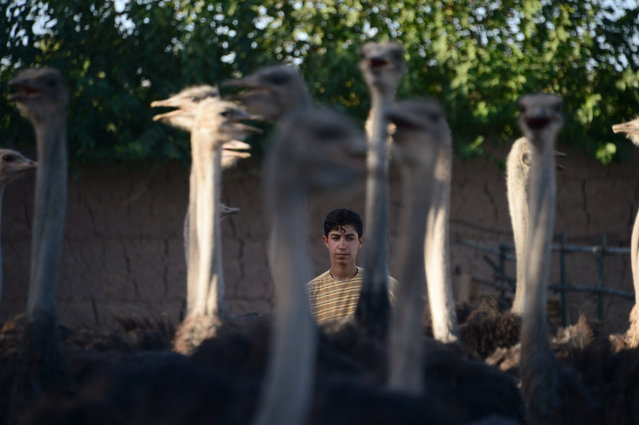 In this photograph taken on August 15, 2017, an ostrich farmer stands by his ostriches on a farm on the outskirts of Herat, Afghanistan. (Photo by Hoshang Hashimi/AFP Photo) 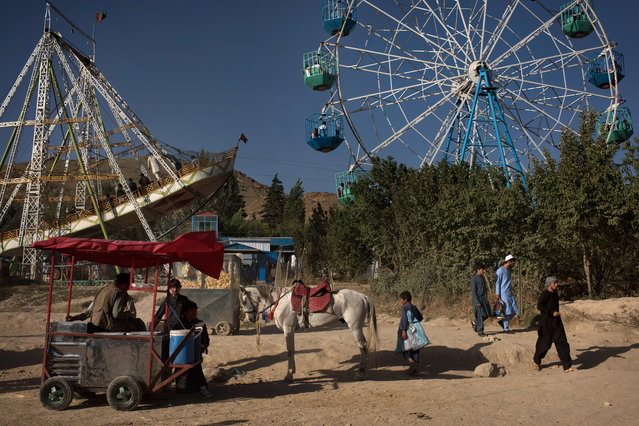 A horse stands in front of amusement park rides at Qargha Lake, a popular weekend destination on the outskirts of Kabul, on July 21, 2017 in Kabul, Afghanistan. Despite a heavy security presence throughout the city, life remains under constant threat of terror and unrest for residents. According to the United Nations, Kabul province had the highest number of civilian casualties in 2017 due to suicide and complex attacks in Kabul city. (Photo by Andrew Renneisen/Getty Images) 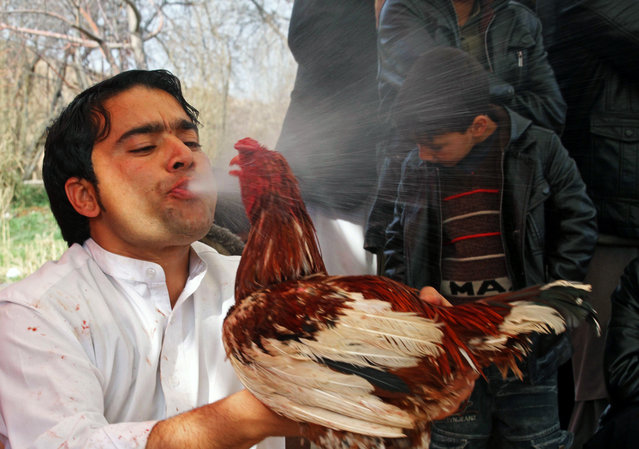 An Afghan sprays water on a rooster after the rooster fight in Herat, Afghanistan, 06 February 2015. Gamblers sometimes bet up to 500 Euros per fight. A system similar to boxing is used, with marks and rounds. The owners decide when to stop the match and which bird is the winner. During the Taliban regime gambling and gaming was forbidden. (Photo by Jalil Rezayee/EPA) 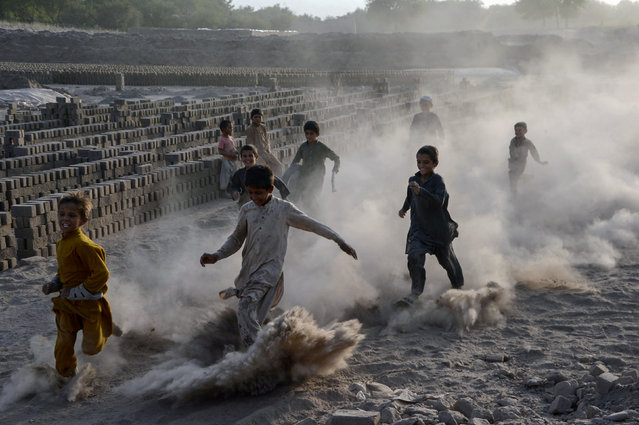 In this photograph taken on August 16, 2017, Afghan children run as they play along a dusty road on the outskirts of Jalalabad. (Photo by Noorullah Shirzada/AFP Photo) 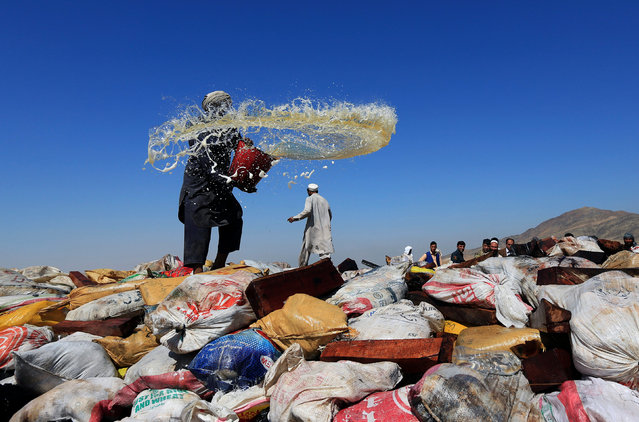 An Afghan man prepares to burn a pile of illegal narcotics on the outskirts of Jalalabad, Afghanistan September 26, 2017. (Photo by Reuters/Parwiz) 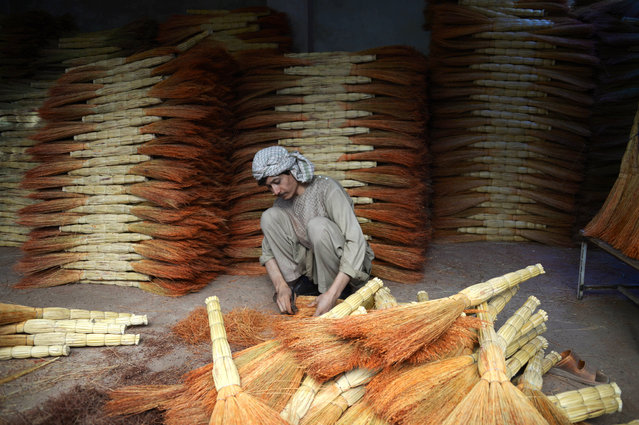 Afghan shopkeeper Naeem, 32, sorts brooms in his shop as he waits for customers on the outskirts of Mazar-i-Sharif on August 14, 2017. (Photo by Farshad Usyan/AFP Photo) 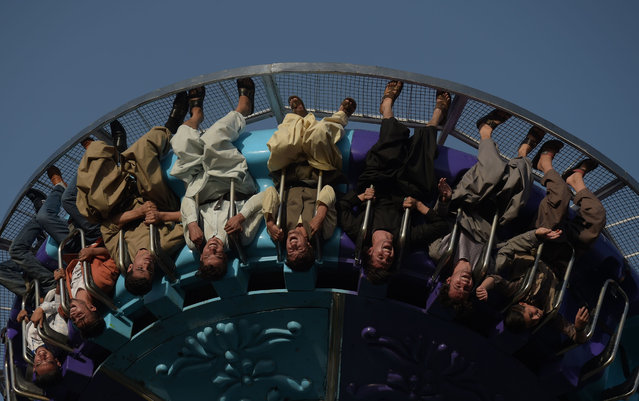 Afghan visitors ride a fairground ride at the Park Shahar or City Park, in Kabul on September 6, 2017. (Photo by Shah Marai/AFP Photo) 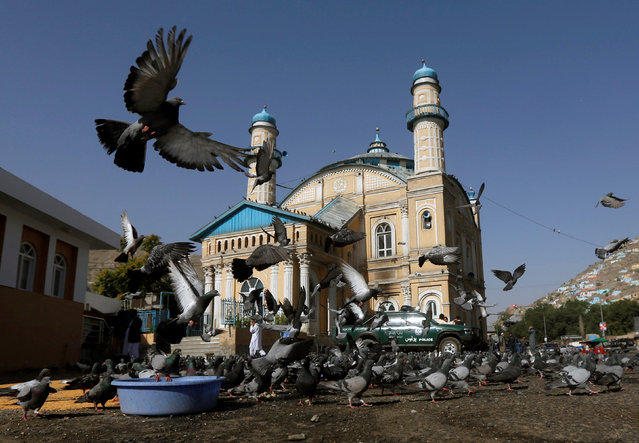 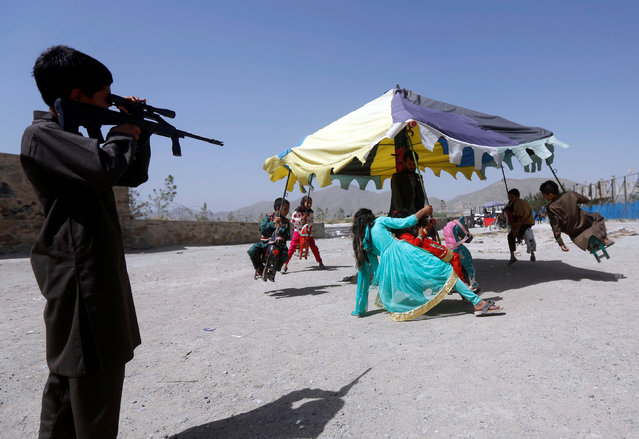 An Afghan boy looks through the scope of a toy gun, as other children ride on swings during the first day of the Muslim holiday of Eid al-Fitr, which marks the end of the holy month of Ramadan, in Kabul, Afghanistan June 25, 2017. (Photo by Omar Sobhani/Reuters) 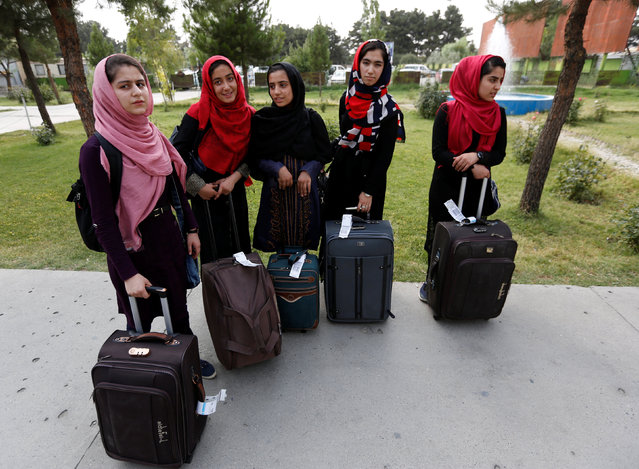 Members of Afghan robotics girls team arrive to receive their visas from the U.S. embassy in Kabul, Afghanistan July 13, 2017. (Photo by Mohammad Ismail/Reuters) 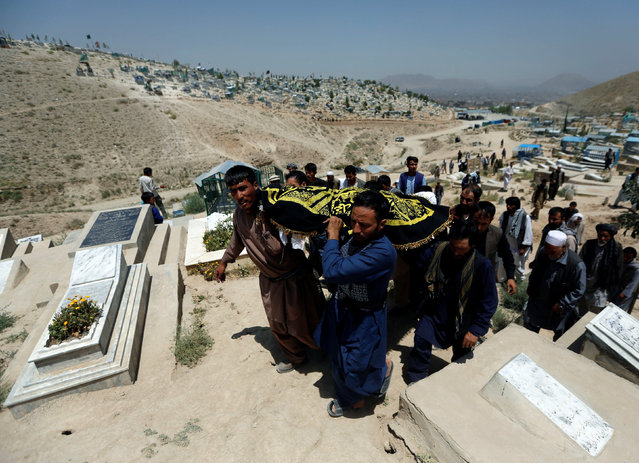 Afghan men carry the coffin of one of the victims of yesterday's suicide attack during a burial ceremony in Kabul, Afghanistan July 25, 2017. (Photo by Mohammad Ismail/Reuters) 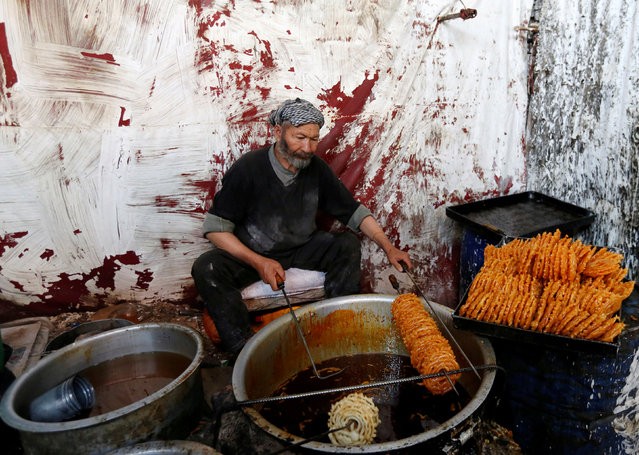 A man makes traditional Jelabi sweets at a small traditional factory ahead of the Eid al-Adha, in Kabul, Afghanistan August 29, 2017. (Photo by Mohammad Ismail/Reuters) 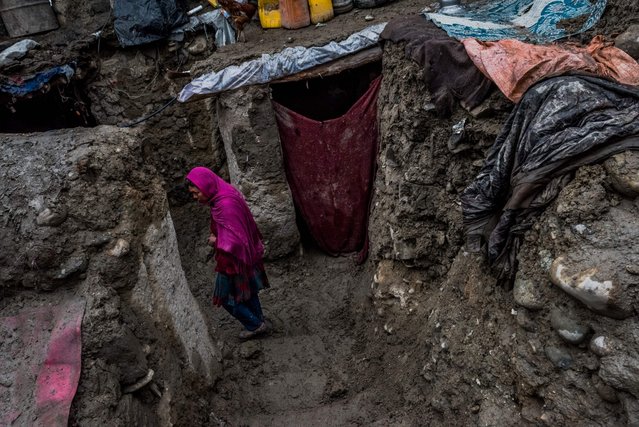 In this photograph taken on March 22, 2017, Afghan resident Fareeza, who is unsure of her age, walks through the home she shares with relatives of the founder of the Zanabad “Widows Hill”, Bibikoh, in Zanabad on the outskirts of Kabul. The first ones settled this stony slope outside Kabul in the 1990s, hoping to escape the stigma targeting women like them. Afghanistan's hill of widows now houses many who lost husbands, but claim independence. The rocky summit 15 kilometres south-east of the capital was gradually swallowed by the city, becoming a distant suburb. But for its residents, it remains “Zanabad”, the city of women. (Photo by Rebecca Conway/AFP Photo) 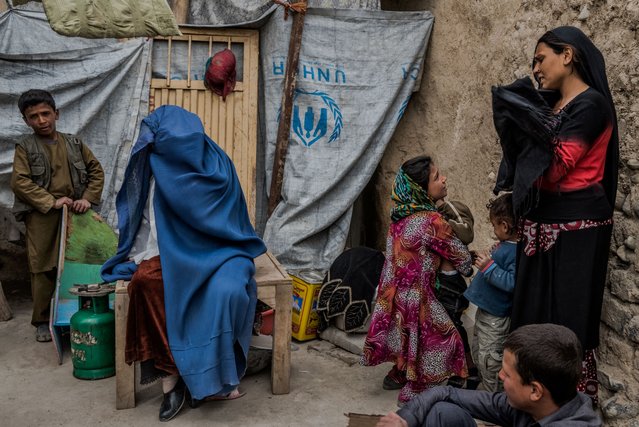 In this photograph taken on March 20, 2017, Afghan widow Nawzi Fakiri (C) speaks during an interview with AFP at her home, alongside members of a dislaced family from Kunduz, who now live with her, on the Zanabad “Widows Hill” on the outskirts of Kabul. (Photo by Rebecca Conway/AFP Photo) 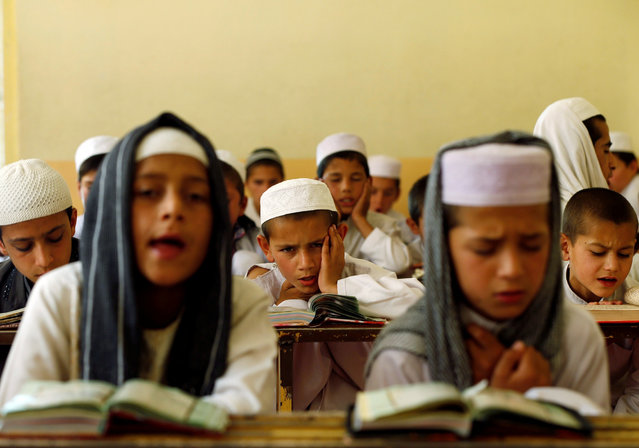 Afghan boys read the Koran in a madrasa, or religious school, during the Muslim holy month of Ramadan in Kabul, Afghanistan May 28, 2017. (Photo by Omar Sobhani/Reuters) 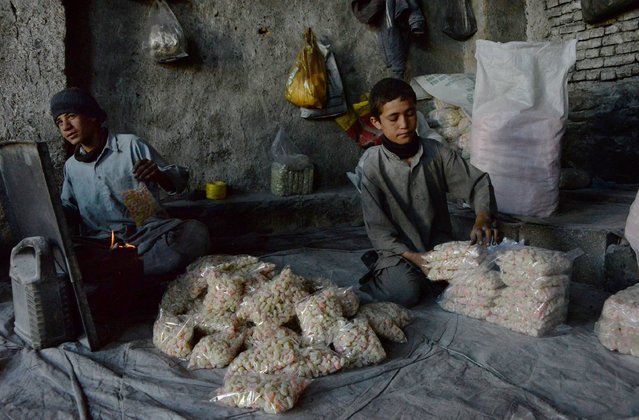 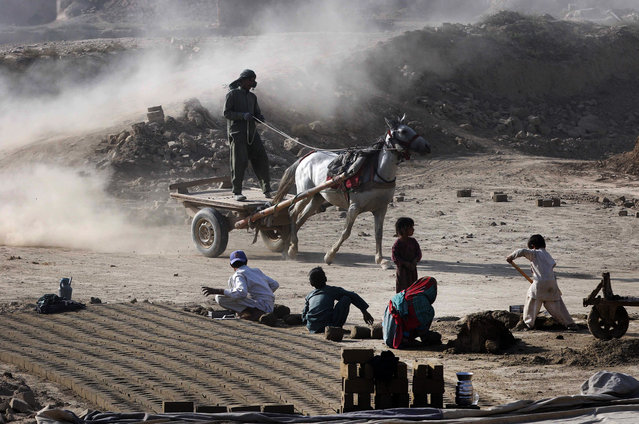 An Afghan family work at a brick Kiln on the outskirts of Kabul, Afghanistan, 24 September 2017. Due to the lack of schooling and education facilities in Afghanistan and the need to earn an income for often large families, parents often send their children to the factory to work. According to reports some three to five million children, mostly girls, are still unable to attend schools. (Photo by Hedayatullah Amid/EPA/EFE) 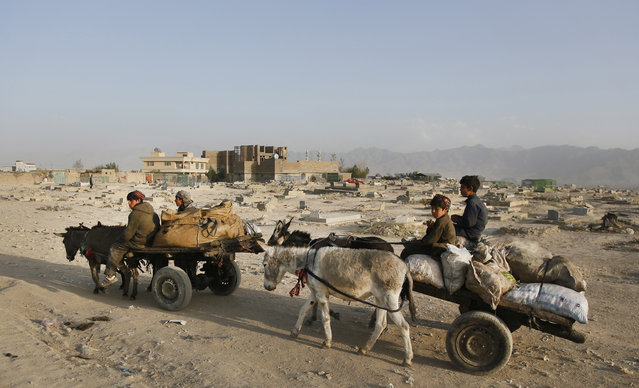 Afghan child vendors carry the goods on donkeys in the outskirt of Kabul, Afghanistan, 08 October 2017. Everyday from the morning until evening they search the garbage and take the useful parts and sell to make between three and four US dollars. (Photo by Jawad Jalali/EPA/EFE) 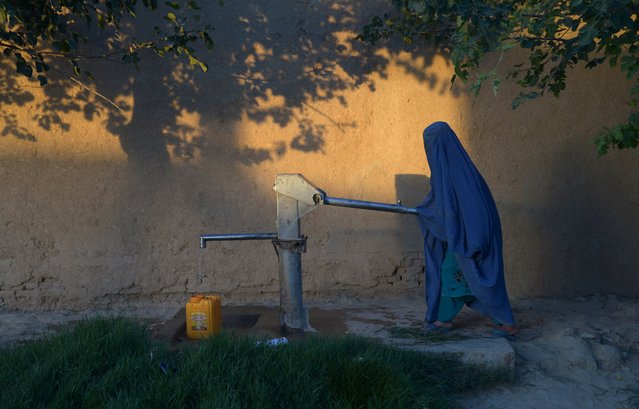