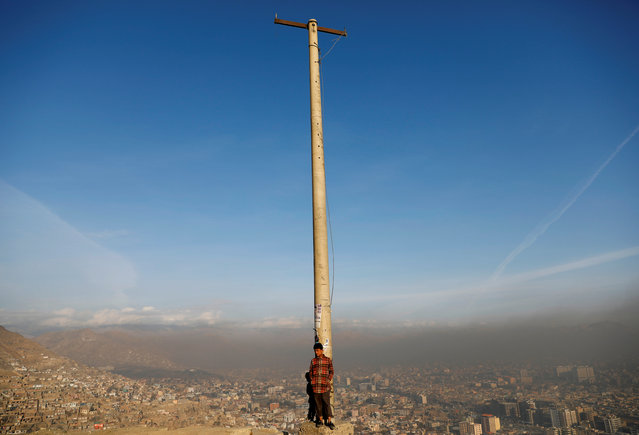 An Afghan boy stands in the sun on a hilltop overlooking Kabul, Afghanistan November 19, 2018. (Photo by Mohammad Ismail/Reuters) 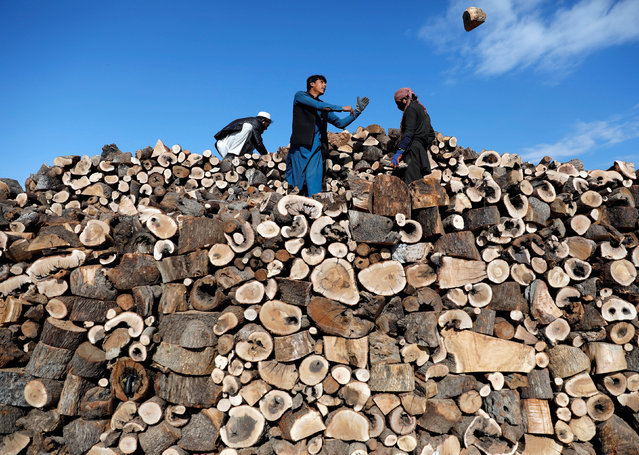 Afghan men work at their firewood stall in Kabul, Afghanistan on November 14, 2018. (Photo by Mohammad Ismail/Reuters) 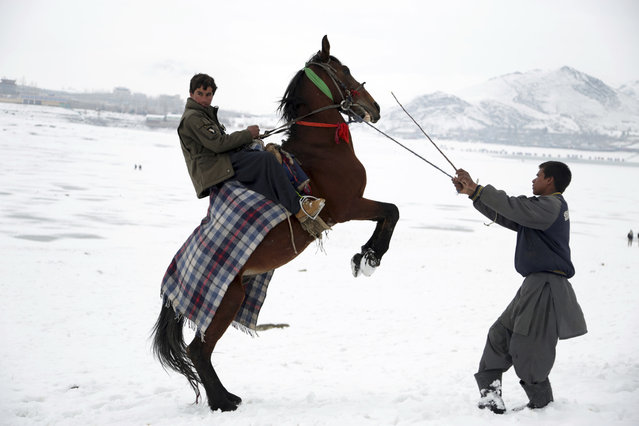 A man shows off his horse skills in an effort to attract customers to take a ride, on the outskirts of Kabul, Afghanistan, Wednesday, January 30, 2019. (Photo by Rahmat Gul/AP Photo) Laborers work at an aluminum factory in Herat, Afghanistan, 21 January 2019. Some 120 laborers work at the factory that produces four tons of Aluminum daily. (Photo by Jalil Rezayee/EPA/EFE) An Afghan Internally Displaced woman bake bread in mud oven outside her temporary shelter on the outskirts of Herat, Afghanistan, 17 January 2019. According to rights groups hundreds of thousands of Afghans have been forced to flee their homes due to violence in the past several years and urged the Afghan government and the international community to tackle the country's growing crisis of refugees internally displaced by war. (Photo by Jalil Rezayee/EPA/EFE) 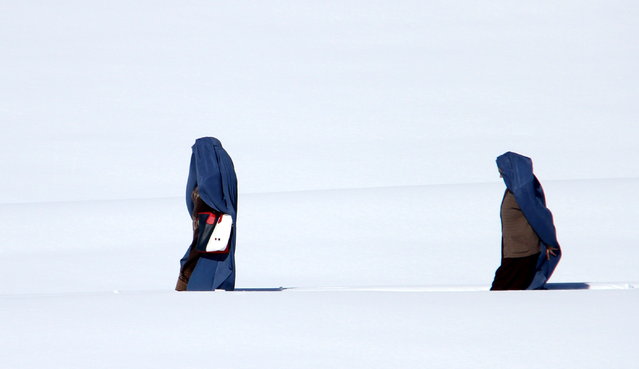 People make their way through snow covered way in Ghazni, Afghanistan, 04 March 2019. Afghanistan is experiencing harsh winters with temperatures falling well below freezing in many parts of the country. (Photo by Ghulam Mustafa/EPA/EFE) 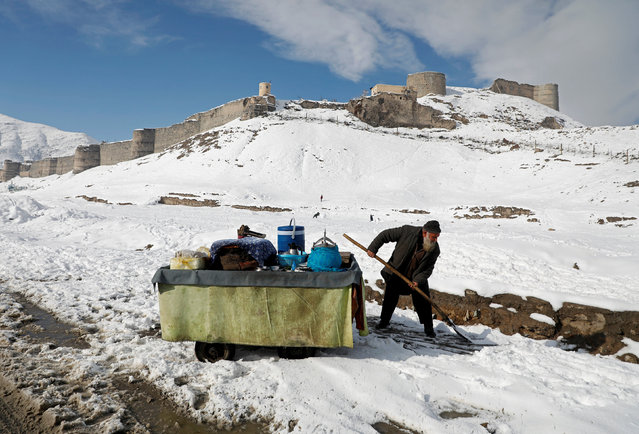 An Afghan man removes snow next to his handcart after the first snow in winter on the snow-covered ground in Kabul, Afghanistan, January 5, 2019. (Photo by Omar Sobhani/Reuters) 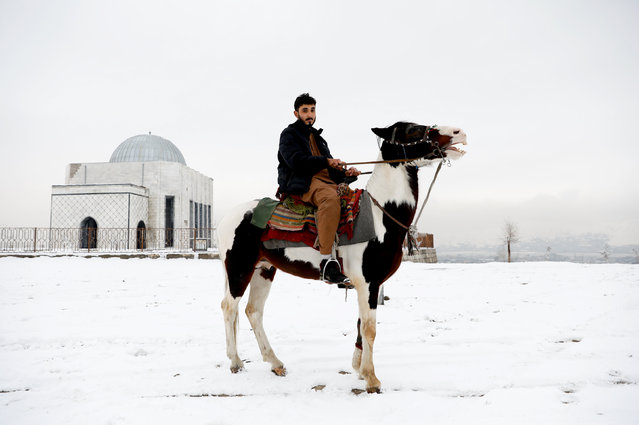 Afghan model Sultan Qasim Sayeedi, 18, poses for a picture in Kabul, Afghanistan, January 14, 2019. Sayeedi scours Facebook, YouTube and Instagram to learn about fashion and modelling and draws inspiration from his favourite models, including Saudi Arabia's Omar Borkan, and Canadian popstar Justin Bieber. “We're afraid that if the Taliban come then we will not be able to hold our shows”, he said. Despite that wariness, Sultan says it's time the fighting ended. “If American troops will go peace will come, we want peace”, he said. (Photo by Mohammad Ismail/Reuters) An Afghan boy jumps from the remains of a Soviet-era tank on the outskirts of Jalalabad, Afghanistan on February 15, 2019. (Photo by Reuters/Parwiz) Men work at a poultry farm in Kandahar, Afghanistan, 03 January 2019. Kandahar has 470 poultry farms that produce around 30 tons of chicken meat, 130000 eggs per day and a job opportunity to around 3000 persons. (Photo by Muhammad Sadiq/EPA/EFE) 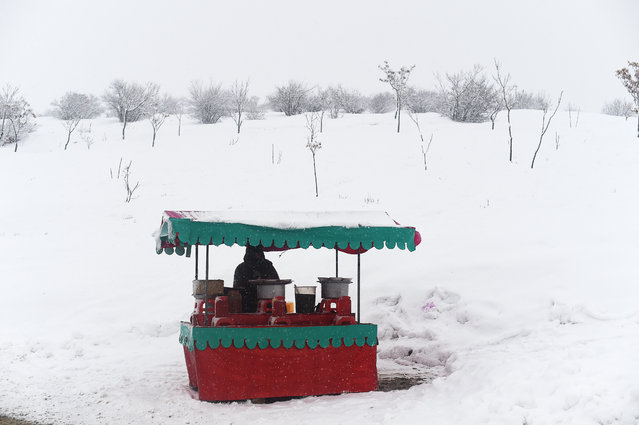 Afghan chickpea vendor looks on as he waits for customers at his roadside stall near the Qargha Lake on the outskirts of Kabul on February 20, 2019. (Photo by Wakil Kohsar/AFP Photo) 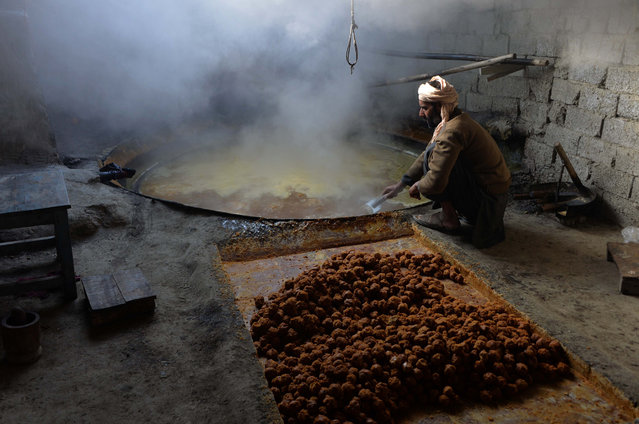 In this photograph taken on December 26, 2018, an Afghan laborer prepares brown sugar from sugarcane juice at a traditional factory in the Kama District of Nangarhar Province, east of Jalalabad. (Photo by Noorullah Shirzada/AFP Photo) Internally displaced Afghan boys stand outside their shelter during a snowfall in Kabul, Afghanistan January 10, 2019. (Photo by Mohammad Ismail/Reuters) Afghan girls pose for a photograph in Sarhood district of Nangarhar province, Afghanistan, 13 December 2018. According to reports, 39 percent of the 9.2 million students in the country are girls. However, three to five million children, mostly girls, are still unable to attend schools. (Photo by Ghulamullah Habibi/EPA/EFE) 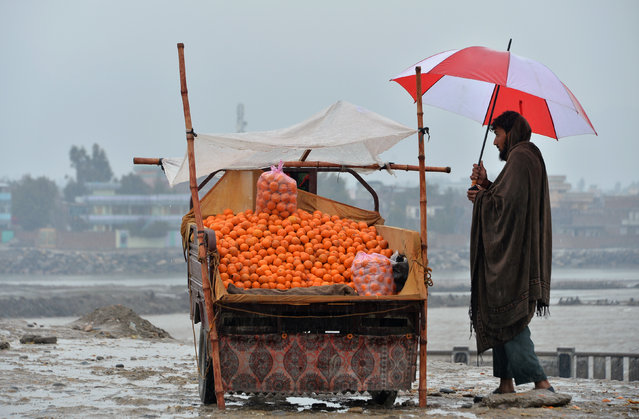 In this photo taken on March 11, 2019 an Afghan street vendor selling oranges waits for customers on a rainy day on the roadside in Jalalabad. (Photo by Noorullah Shirzada/AFP Photo) An Afghan man pushes a wheelbarrow as he carries water cans during the snowfall in Kabul on January 10, 2019. (Photo by Wakil Kohsar/AFP Photo) Afghan security forces gather at the site a day after an attack in Kabul, Afghanistan, Tuesday, January 15, 2019. A Taliban suicide bomber detonated an explosive-laden vehicle in the capital Kabul on Monday evening, according to officials. (Photo by Rahmat Gul/AP Photo) 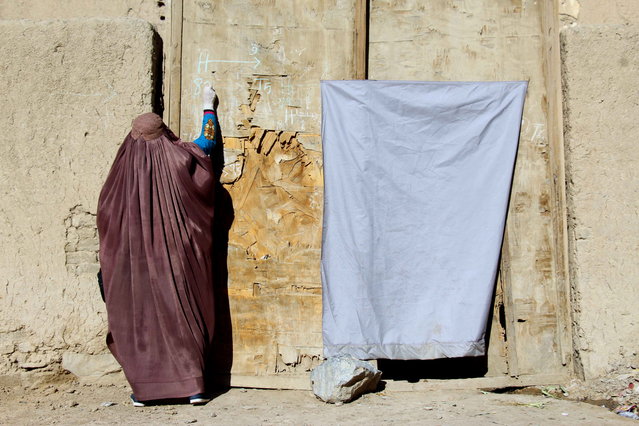 A health worker marks the houses as she administers polio vaccination to children in Kandahar, Afghanistan, 11 December 2018. Last vaccination campaign for year 2018 was completed in Afghanistan on 11 December, with total of 21 Polio cases reported, nine of which from Kandahar. Afghanistan is one of the two countries along with neighboring Pakistan where polio is still endemic, crippling hundreds of children every year. (Photo by Muhammad Sadiq/EPA/EFE)