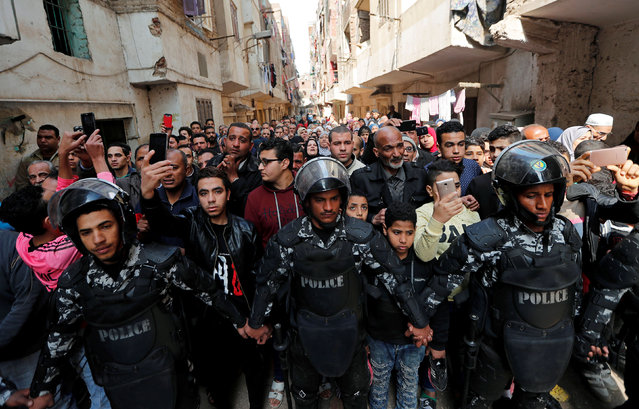 Policemen and people take part in the funeral of Egyptian police officer Mahmoud Abou El Yazied who was killed in a blast, in Cairo, Egypt on February 19, 2019. (Photo by Amr Abdallah Dalsh/Reuters) 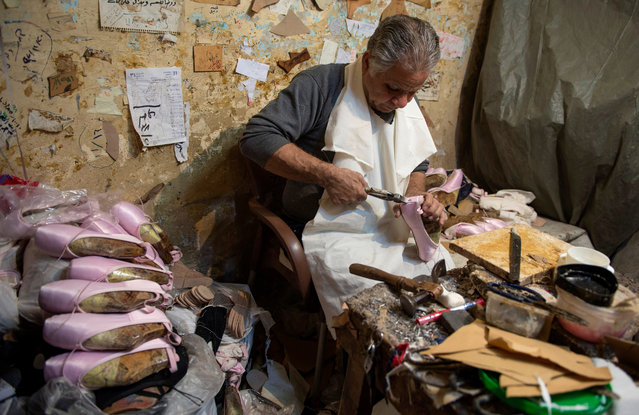 Mahmoud Saleh, 67, works at his workshop in al-Omraneyah district of Giza, Egypt, 19 January 2019 (Issued 02 February 2019). Mahmoud Saleh, 67, is the owner of the only workshop that produces handmade ballet shoes in Egypt. He started working 51 years ago when his father, a craftsman for soccer, wrestling, and boxing shoes, was approached by a Russian expert residing in Egypt in 1968 to offer him and his son to work at his factory after seeing their products. In 1980 Saleh left the factory and started his own business which became famous, and in 1991 the Cairo Opera House contracted him to be the manufacturer of its Ballet Company for 12 thousand Egyptian pounds (then four thousand US dollars), with this money he bought a bigger workshop at al-Omraneyah district of Giza and never stopped producing ever since. Nowadays, Saleh’s work is exported to many countries, including Russia, Germany, Italy, and UAE, as well as suppling handmade ballet shoes to all ballet centers in Egypt. (Photo by Mohamed Hossam/EPA/EFE) 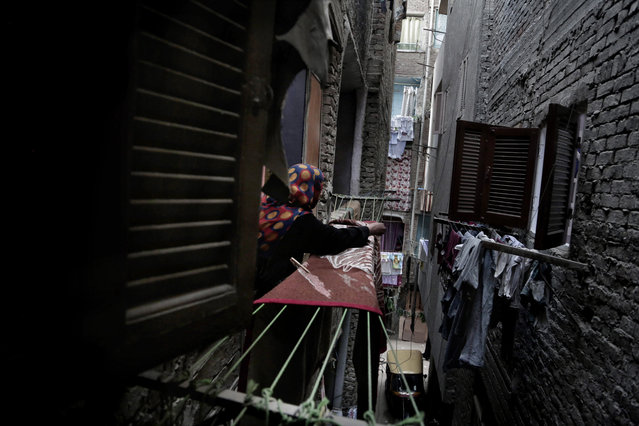 In this October 29, 2018 photo, a woman hangs a rug in the Imbaba neighborhood of Giza, Egypt. A new Egyptian capital is being built on 170,000 acres about 28 miles east of Cairo, but what will become of Cairo, a city of 20 million people that combines charm and squalor? The smallest apartment in the new capital – 120 square meters – is expected to cost 1.3 million Egyptian pounds ($73,000), out of reach for most Egyptians. (Photo by Nariman El-Mofty/AP Photo) 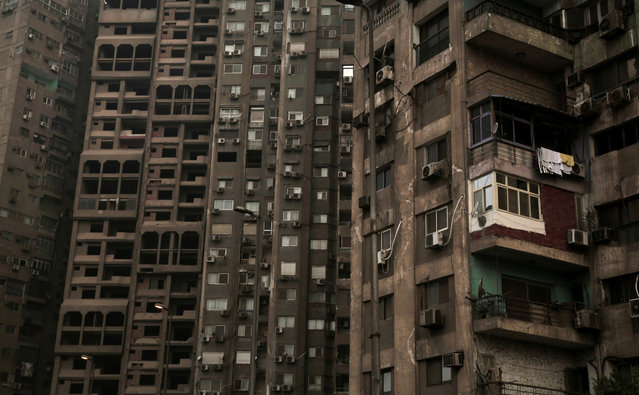 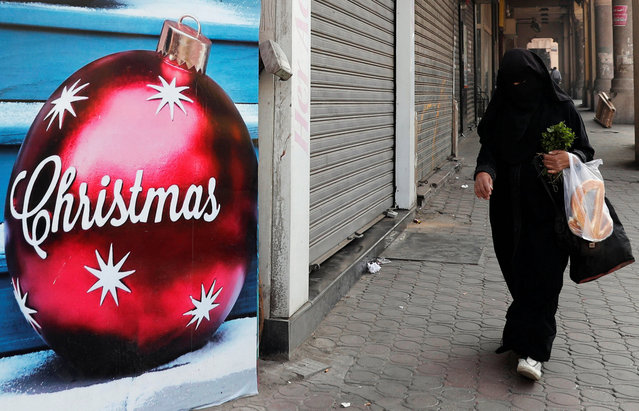 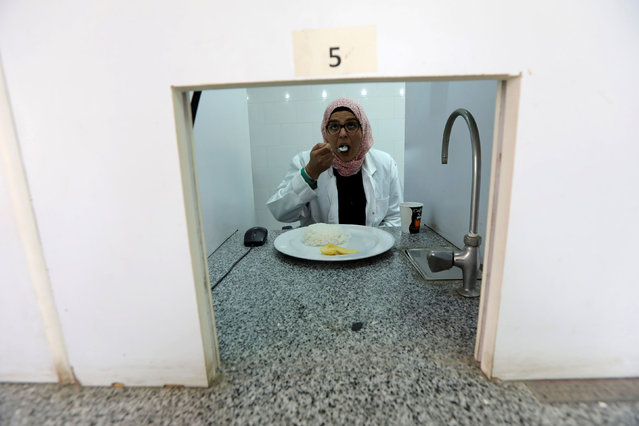 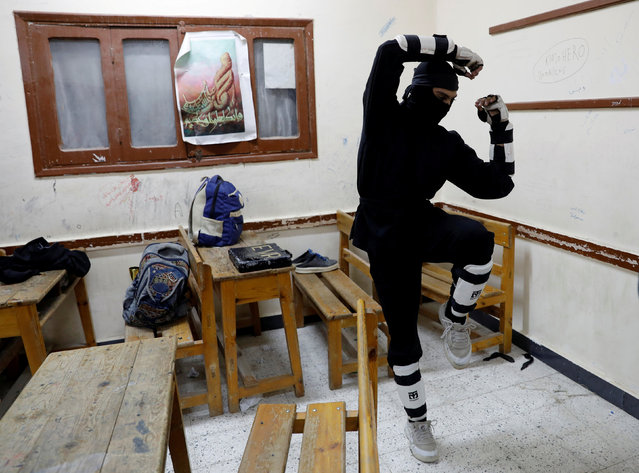 A member of the Egyptian Arab Federation of Professional Wrestlers “EWR” attends a training at a class of the Abu Sultan High School, before a public fight in Ismailiya, northern of Cairo, Egypt October 26, 2018. Picture taken October 26, 2018. (Photo by Amr Abdallah Dalsh/Reuters) 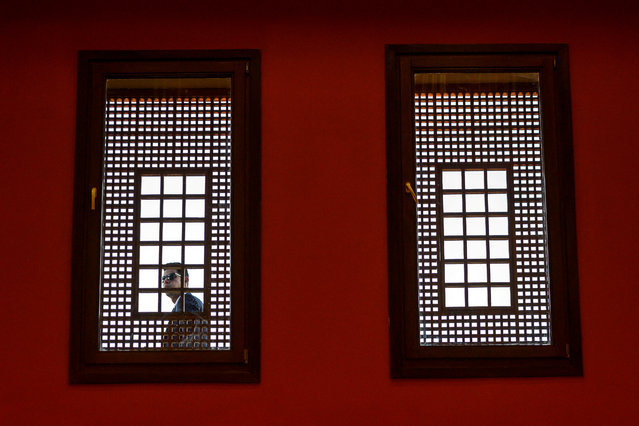 A security guard looks through a window as U.S. Secretary of State Mike Pompeo speaks to students at the American University in Cairo, Egypt on January 10, 2019. (Photo by Andrew Caballero-Reynolds/Pool via Reuters) 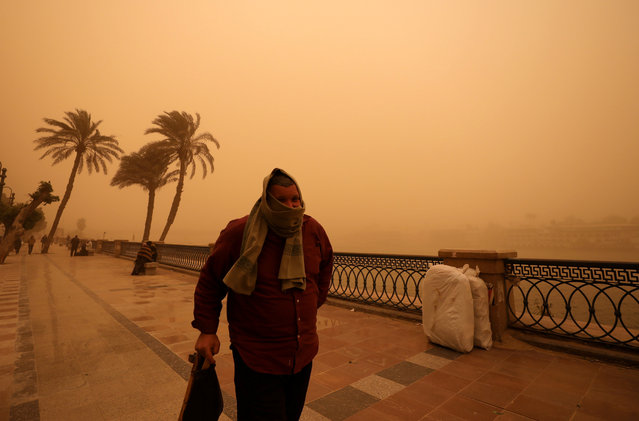 A man covers his face during a sandstorm near the River Nile in Cairo, Egypt on January 16, 2019. (Photo by Mohamed Abd El Ghany/Reuters) 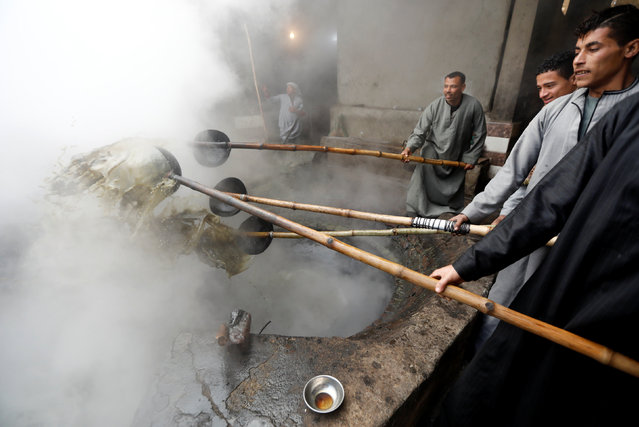 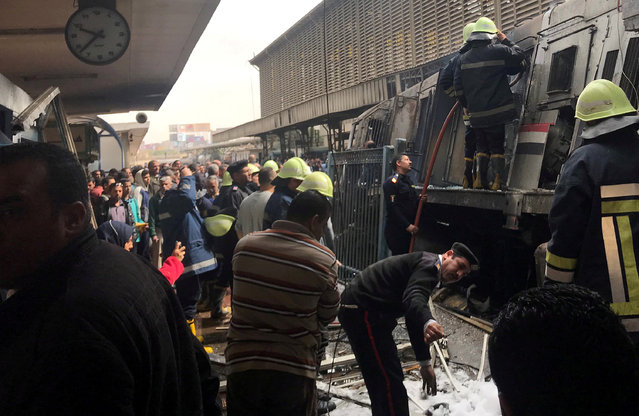 A member of security forces gestures as rescue workers and people gather at the scene after a fire caused deaths and injuries at the main train station in Cairo, Egypt, February 27, 2019. (Photo by Amr Abdallah Dalsh/Reuters) 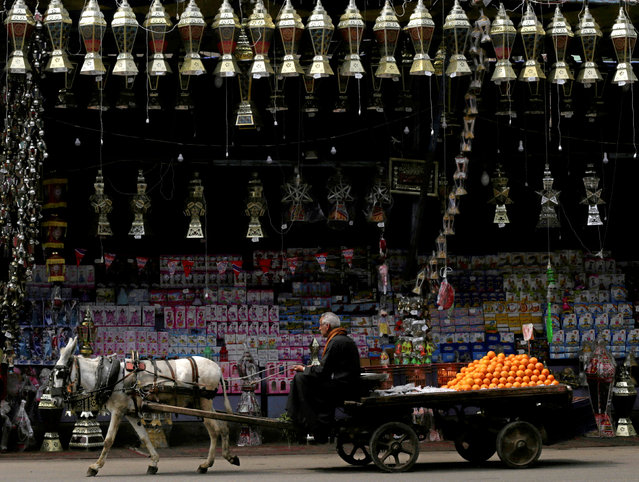 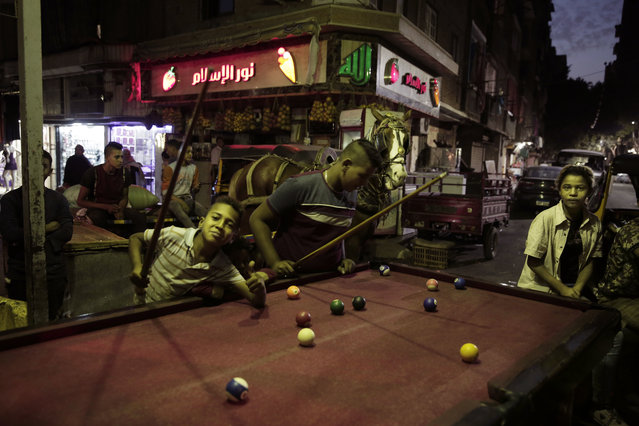 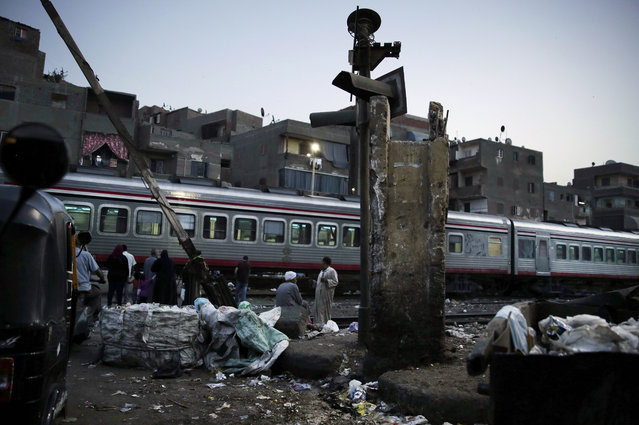 In this October 23, 2018 photo, people wait for the train to pass in Shubra, Cairo, Egypt. A city of 20 million people that combines charm and squalor, Cairo may soon witness an exodus by some of its well-heeled residents, state employees and foreign embassies to a new capital. The new capital – a proper name has yet to be found – is the $45 billion brainchild of general-turned-president Abdel-Fattah el-Sissi, the biggest of the mega-projects he launched since taking office in 2014. (Photo by Nariman El-Mofty/AP Photo) 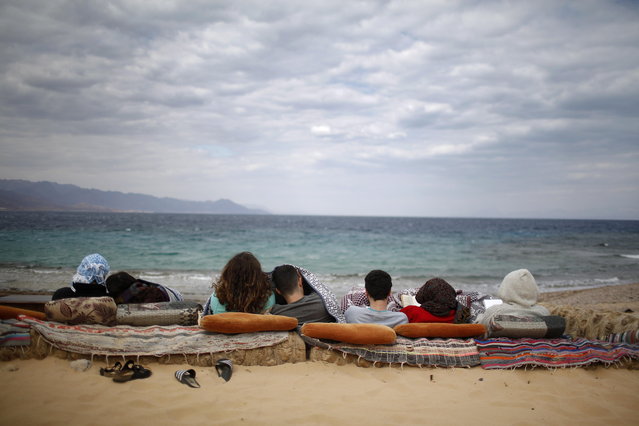 Israeli tourists at a beach in the Red Sea of the Gulf of Aqaba near Nuweiba, Sinai Peninsula, Egypt, 01 March 2019. Many Israelis travel to relax at the beaches of Sinai Peninsula despite the warnings of Israel's National Security Council, which defines Sinai as a high target for terrorist attacks against Israelis. (Photo by Abir Sultan/EPA/EFE) 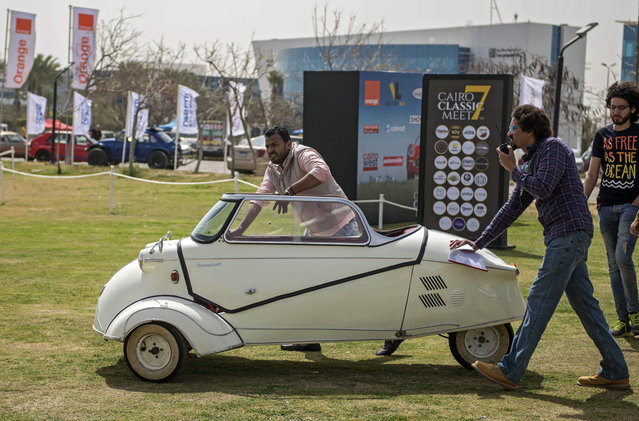 Two men push a classic Messerschmidt KR200 “Kabinenroller” at the 7th Cairo Classic Meet in Cairo, Egypt, 23 March 2019. The exhibition for classic cars is held at the Smart Village in Cairo. The exhibition is held to exchange experiences in how to preserve the old cars, and also for promoting tourism. (Photo by Mohamed Hossam/EPA/EFE) 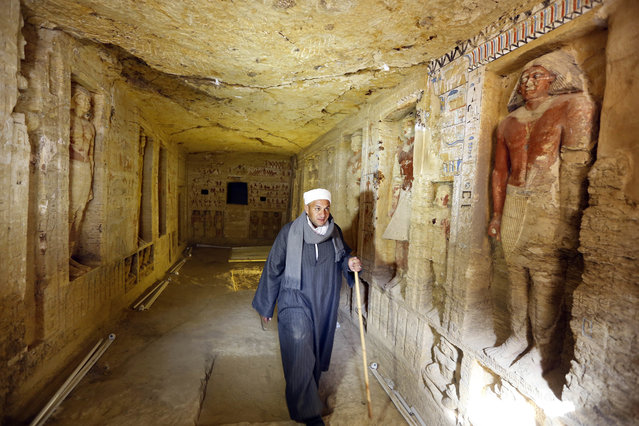 Mustafa Abdo, chief of excavation workers walks at a recently uncovered tomb of the Priest royal Purification during the reign of King Nefer Ir-Ka-Re, named “Wahtye”, at the site of the step pyramid of Saqqara, in Giza, Egypt, Saturday, December 15, 2018. The Egyptian Archaeological Mission working at the Sacred Animal Necropolis in Saqqara archaeological site succeeded to uncover the tomb, Antiquities Minister Khaled el-Anani, announced. (Photo by Amr Nabil/AP Photo) 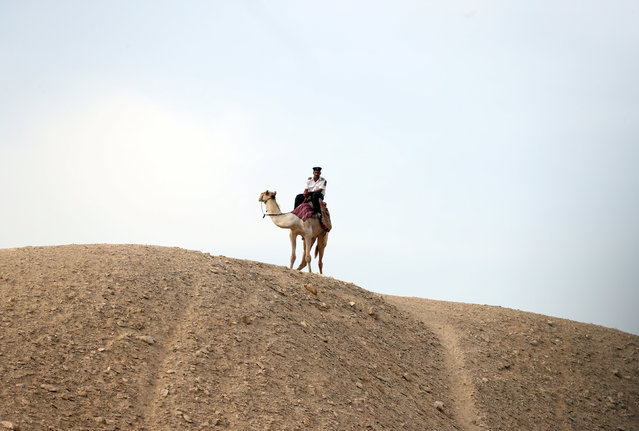 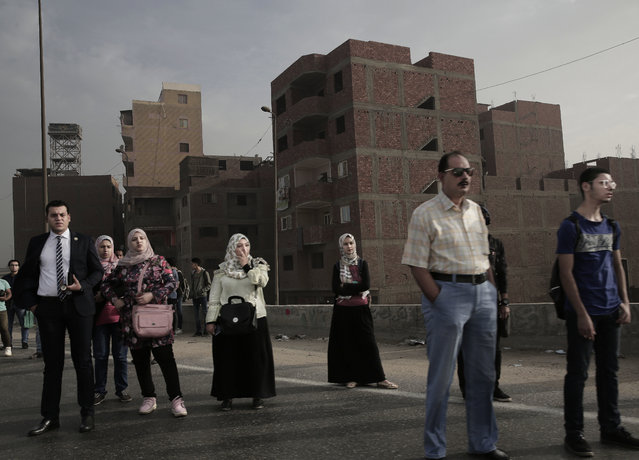 In this October 23, 2018 photo, people wait for an early morning bus on the ring road, in Cairo, Egypt. A city of 20 million people that combines charm and squalor, Cairo may soon witness an exodus by some of its well-heeled residents, state employees and foreign embassies to a new capital. The government argues that Cairo is already bursting at the seams and will grow to 40 million by 2050. (Photo by Nariman El-Mofty/AP Photo) 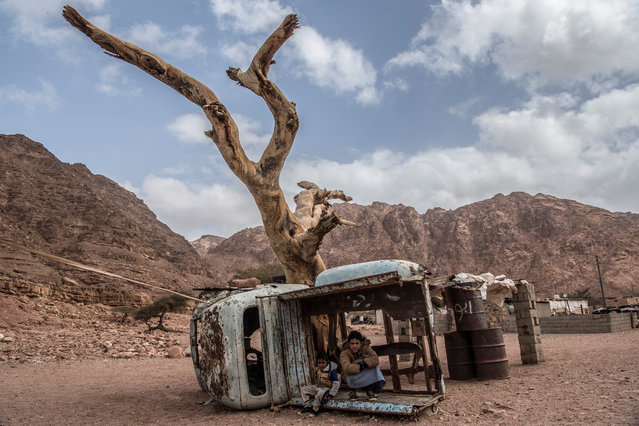 A picture taken on March 30, 2019, shows Egyptian Bedouin children sitting in a rusted shell of a truck in the village of al-Hamada in Wadi el-Sahu in South Sinai governorate. In Wadi Sahu, a village in the southern part of Egypt's eastern Sinai peninsula, made up of humble shacks with corrugated iron and recycled scraps, Bedouins are banking on the return of tourism after the tumultuous years since Egypt's 2011 uprising. (Photo by Khaled Desouki/AFP Photo)
Edit Del
15 Apr 2019 00:03:00, post received 0 comments
Publication archive:
←   →
Popular tags:
All tags
Last searches: