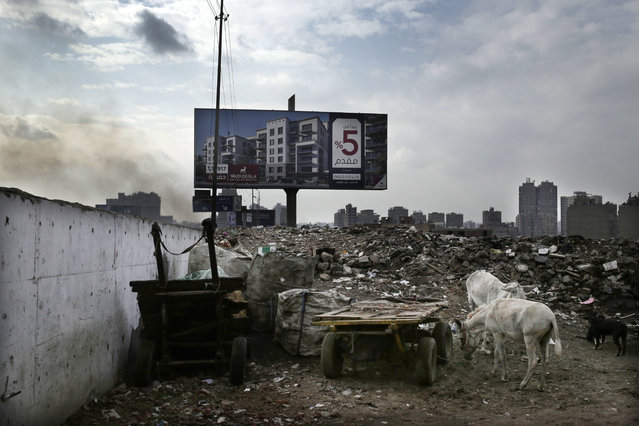 Donkeys eat near an advertisement for a residential housing compound in the Ezbet Khairallah neighborhood of Cairo, Egypt, Tuesday, November 21, 2017. (Photo by Nariman El-Mofty/AP Photo) 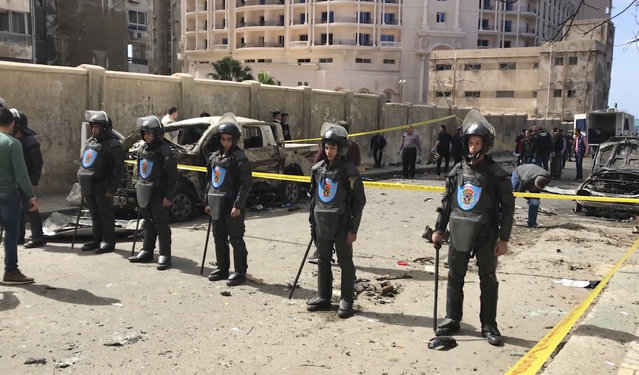 Security members stand guard as investigators search the area after a bomb placed under a nearby car exploded Saturday, March 24, 2018 in Alexandria, Egypt, as the city security chief's convoy passed by, killing at least one policeman and wounding four others, the Interior Ministry said. Local media reports said Gen. Mostafa al-Nimr survived the explosion and he was seen on a local TV channel in good condition while inspecting the area of the blast shortly after it took place. No group immediately claimed responsibility for the explosion, which happened in the vicinity of a police station in the central district of Roshdi. (Photo by Mohamed Khalil/AP Photo) Egyptian dancers perform the Tanoura during the holy fasting month of Ramadan, at el-Ghuri culture Palace in Cairo on May 22, 2018. (Photo by Khaled Desouki/AFP Photo) 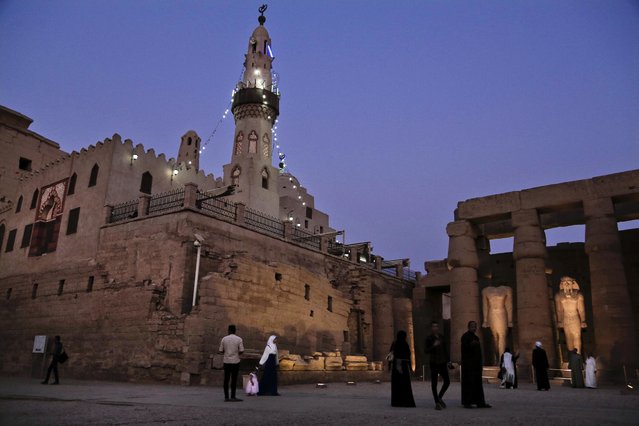 People visit the Luxor Temple in Egypt, Saturday, September 9, 2017. Egypt has announced the discovery in the southern city of Luxor of a pharaonic tomb belonging to a royal goldsmith who lived more than 3,500 years ago during the reign of the 18th dynasty. Antiquities Minister Khaled el-Anani hopes the discovery will boost the country's slowly recovering tourism industry. (Photo by Nariman El-Mofty/AP Photo) 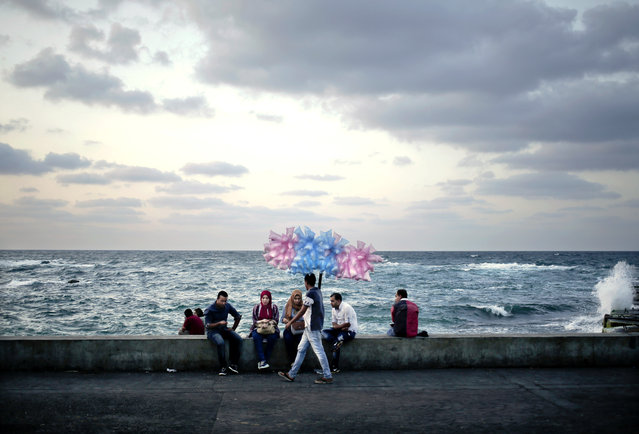 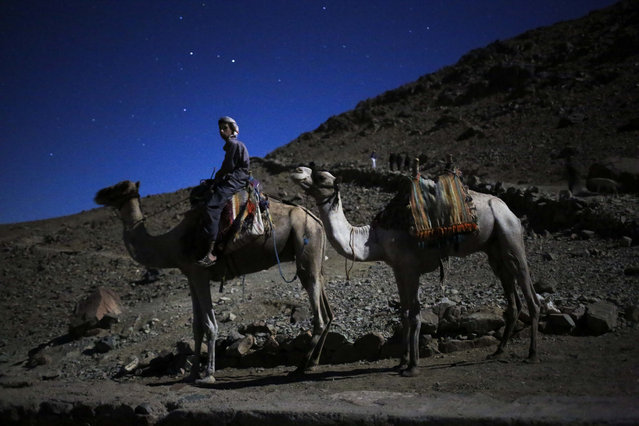 A Bedouin man sits on his camel as he looks for customers for a ride during the hike up to Mount Sinai or 'Mount Moses' ahead of sunrise in Saint Catherine in the Sinai peninsula, Egypt, Friday, October 6, 2017. (Photo by Nariman El-Mofty/AP Photo) 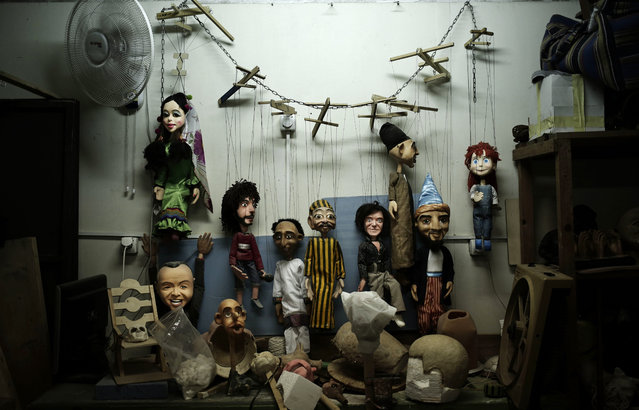 In this April 24, 2018 photo, puppets hang on the wall at the workshop of Egyptian artist Mohamed Fawzi Bakkar, in Cairo, Egypt. Bakkar designs and builds marionettes from scratch, hoping to revive a traditional art. The 32-year-old spends hours or even days designing puppets inspired by Egyptian life – farmers, street vendors, butchers and the occasional celebrity. (Photo by Nariman El-Mofty/AP Photo) 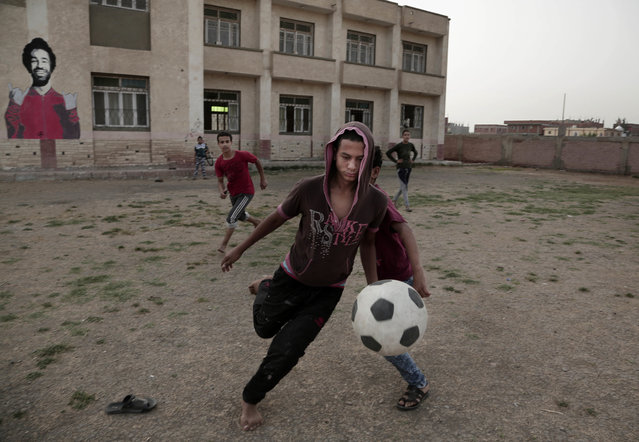 In this May 2, 2018 photo, boys play football at the sports and youth center in Mohamed Salah's hometown Nile delta village of Nagrig, Egypt. Residents boast of how the Liverpool winger has poured millions of pounds into the village, with the beneficiaries’ list including a school, a mosque, a youth center and a dialysis machine at a nearby hospital. His success as a footballer in Europe’s most attractive league has inspired many parents in Nagrig to send their children to soccer academies in the hope that maybe one day they can emulate his success. (Photo by Nariman El-Mofty/AP Photo) 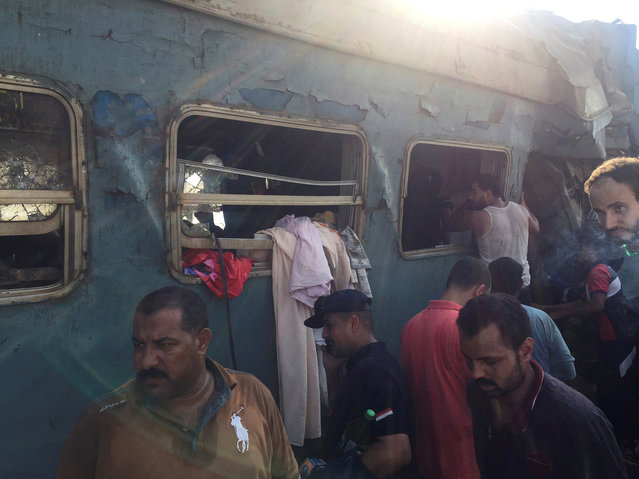 Egyptians search for survivors at the site of a crash where two trains collided near the Khorshid station in Egypt's coastal city of Alexandria, Egypt August 11, 2017. (Photo by Osama Nageb/Reuters) 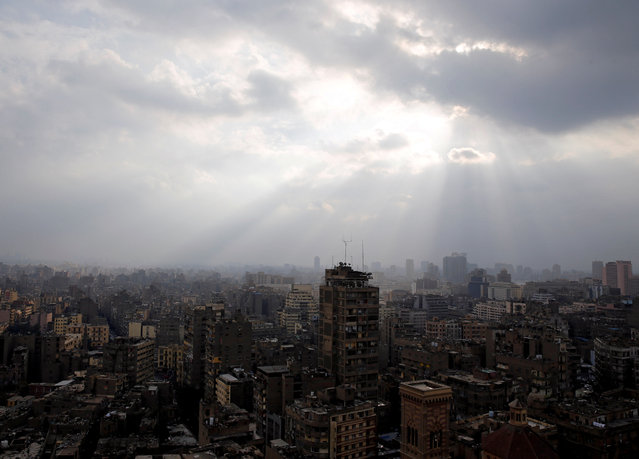 Clouds gather during a rain and cold spell over the capital Cairo, Egypt on November 21, 2017. (Photo by Amr Abdallah Dalsh/Reuters) 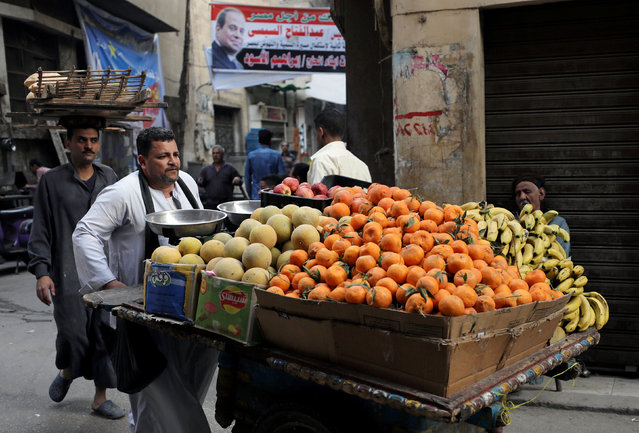 An Egyptian fruit seller is seen at a market in Cairo, Egypt March 19, 2018. (Photo by Mohamed Abd El Ghany/Reuters) 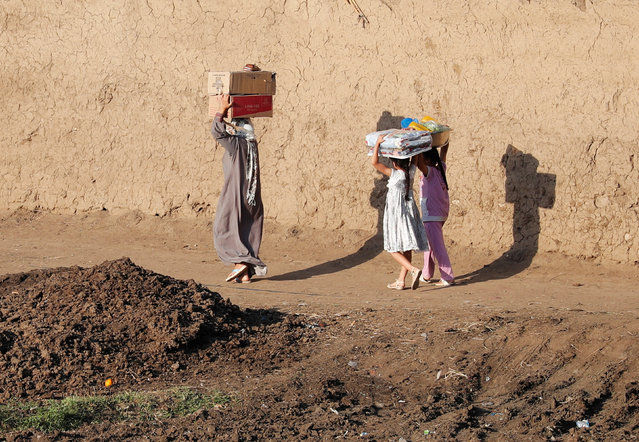 An Egyptian farmer and her daughters carry boxes of fruits on their heads near fields on the outskirts of Cairo, Egypt April 27, 2018. (Photo by Amr Abdallah Dalsh/Reuters) 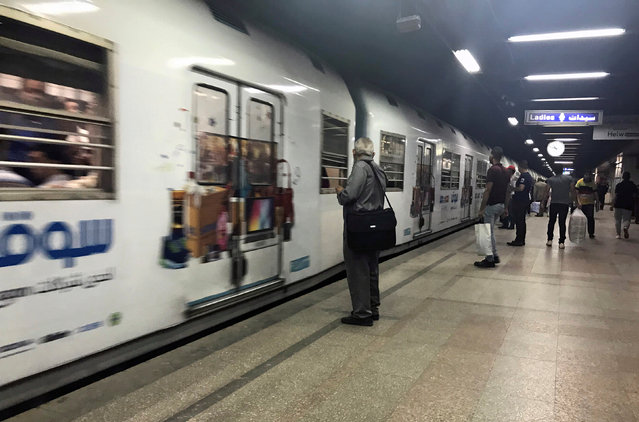 People wait to board a train at El Sadat metro station in the center of Cairo, Egypt May 13, 2018. (Photo by Amr Abdallah Dalsh/Reuters) 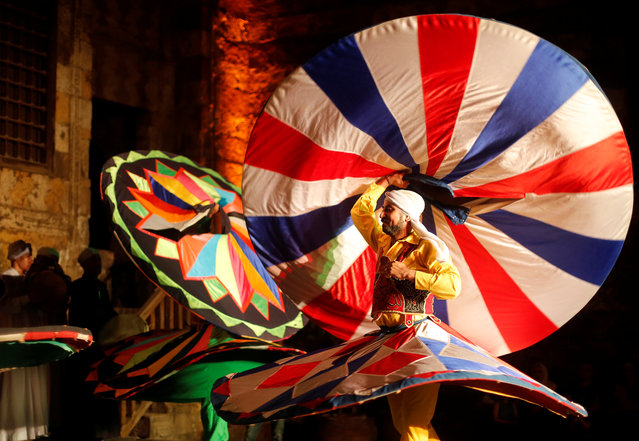 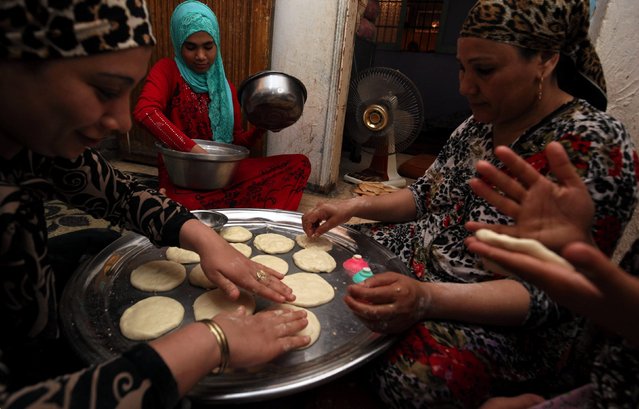 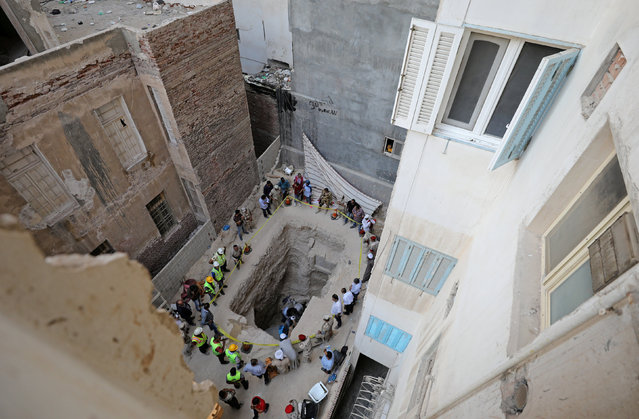 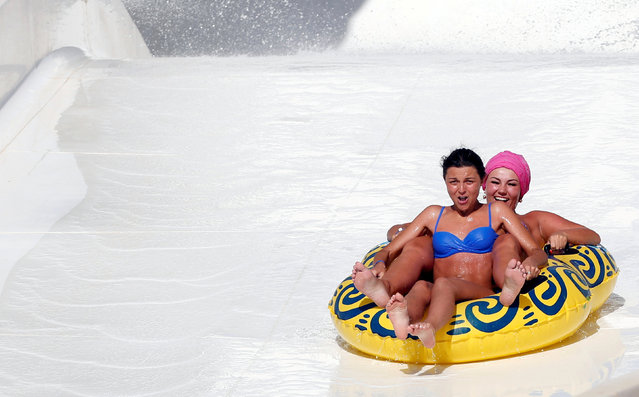 Tourists play on a water slide in an Aqua arena during summer holidays at El Ain El Sokhna in Suez, east of Cairo, Egypt July 21, 2018. (Photo by Amr Abdallah Dalsh/Reuters) 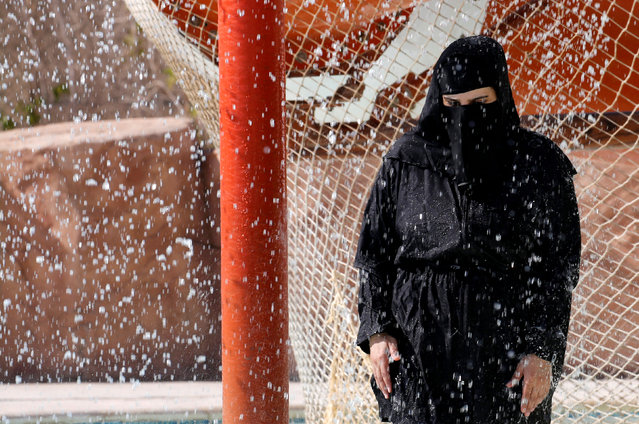 A woman wearing a full veil (niqab) uses a shower to cool off in hot and humid weather inside an Aqua arena during summer holidays at El Ain El Sokhna in Suez, east of Cairo, Egypt July 21, 2018. (Photo by Amr Abdallah Dalsh/Reuters) 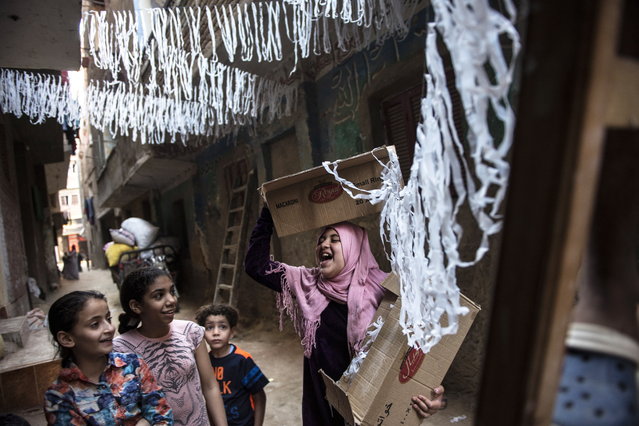 Children assist in the installation of Ramadan's ornaments at the streets of Baragel, on the outskirts of Cairo, Egypt, 12 May 2018. People put up decorations and ornaments in the local tradition in Egypt as part of the celebration of the Holy month of Ramadan, which is expected to start in Egypt on 17 May 2018. Muslims around the world celebrate the holy month of Ramadan by praying during the night time and abstaining from eating, drinking, and sexual acts during the period between sunrise and sunset. Ramadan is the ninth month in the Islamic calendar and it is believed that the revelation of the first verse in Koran was during its last 10 nights. (Photo by Mohamed Hossam/EPA/EFE) 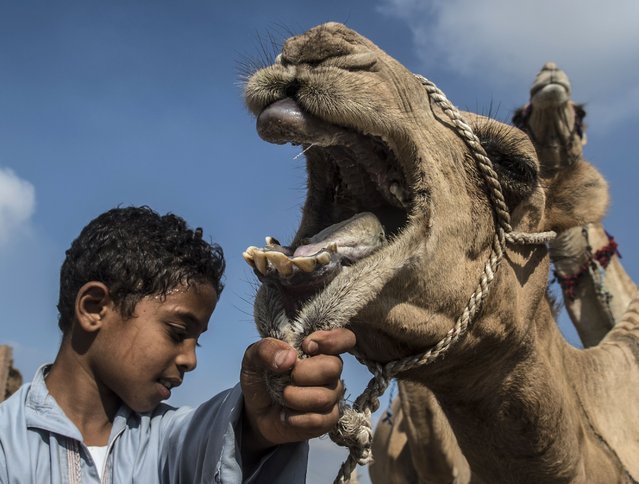 An Egyptian boy holds a camel at the Berqash camel market northeast of Cairo, on August 17, 2018. Muslims across the world are preparing for the Eid al-Adha holiday when custom requires the faithful to make a sacrifice. (Photo by Khaled Desouki/AFP Photo) 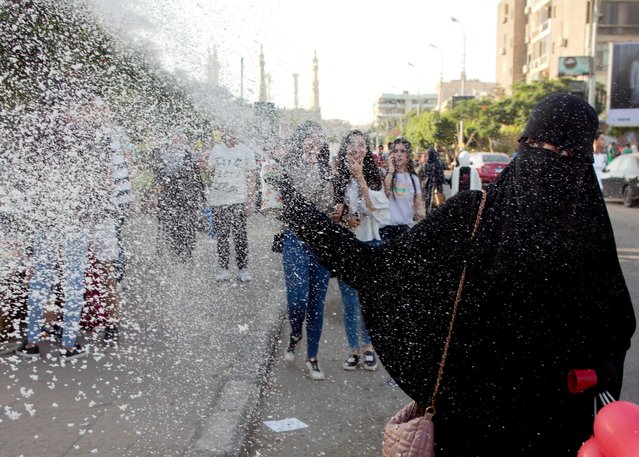